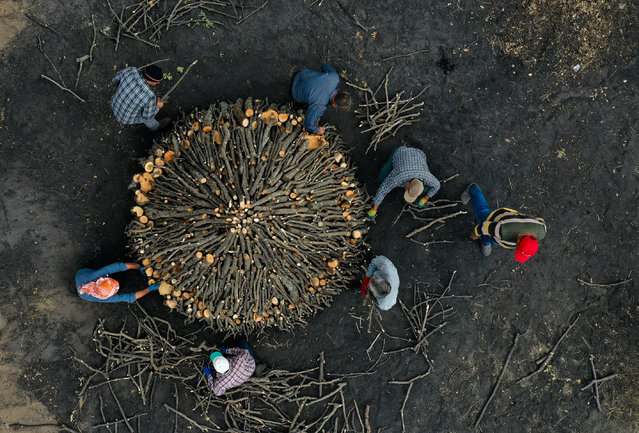 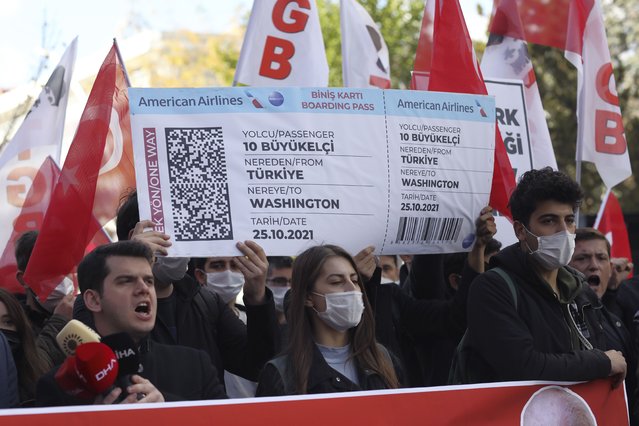 Members of a Turkish group hold a symbolic boarding pass for 10 foreing ambassadors as they stage a protest near the U. S. Embassy to support Turkey's President Recep Tayyip Erdogan, in Ankara, Turkey, Monday, October 25, 2021. Erdogan last Saturday announced he ordered 10 ambassadors, including those from the US, Germany and France, be declared persona non grata, following a joint statement from the envoys calling for the release of Turkish activist Osman Kavala. (Photo by Burhan Ozbilici/AP Photo) 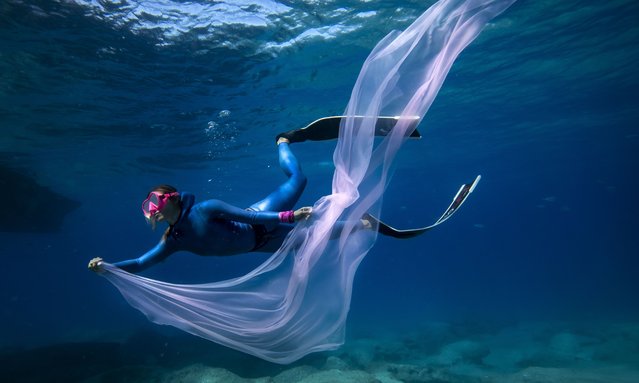 Turkey's multiple world record holder and free diver, Sahika Ercumen wears a pink tulle on her wrist as she dives with women battling breast cancer to raise awareness about breast cancer with the “Pi Women's Cancer Society”, in Antalya, Turkey on October 25, 2021. During the dive, participants wore pink tulles on their wrists, pink ribbons on their scuba diving equipment, and pink and purple diving masks. Sahika Ercumen tomorrow will attempt to break men's and women's world record in 100 meters freediving on a single breath in commemoration of the 98th anniversary of Republic Day of Turkey. (Photo by Sebnem Coskun/Anadolu Agency via Getty Images) 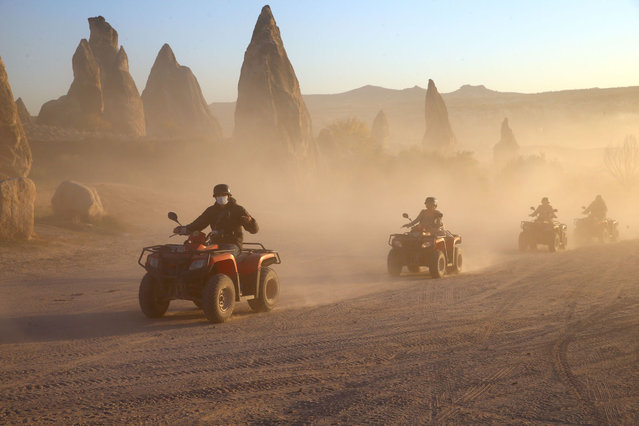 Tourists ride ATVs (all-terrain vehicle) while touring the chimney rocks at Gulludere Valley at the historical Cappadocia region, located in Central Anatolia's Nevsehir province, Turkey on October 24, 2021. Cappadocia is preserved as a UNESCO World Heritage site and is famous for its chimney rocks, hot air balloon trips, underground cities and boutique hotels carved into rocks. In Turkey's one of the most important tourism regions Cappadocia, local and foreign tourists get the chance of enjoying the scenery by participating air balloon tours in the early hours of the morning, riding horse and camel, touring by all-terrain vehicle (ATV) and walking among the fairy chimneys. (Photo by Behcet Alkan/Anadolu Agency via Getty Images) 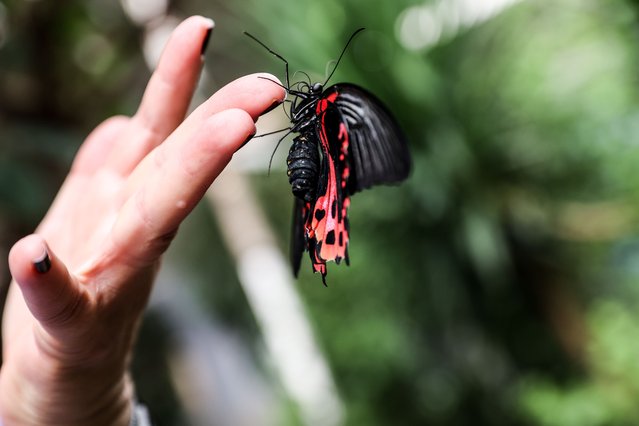 A butterfly is seen at a farm in Beykoz disrtict of Istanbul, Turkey on October 26, 2021. Cigdem Unlu runs a farm where 800 butterflies live and being presented to the visitors as the environment exclusively weathered for butterflies. (Photo by Elif Ozturk Ozgoncu/Anadolu Agency via Getty Images) 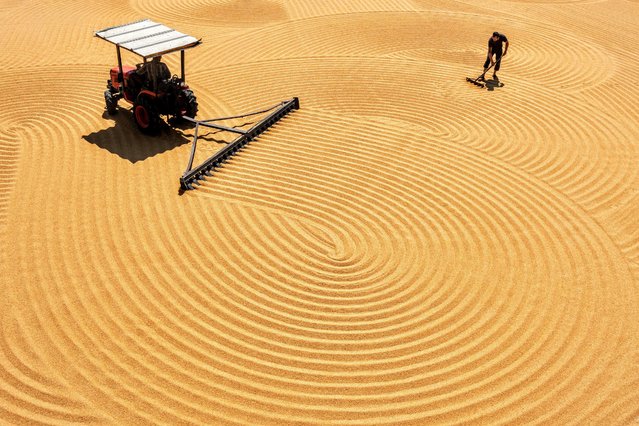 A tractor creates mesmerising patterns as it rakes bulgur wheat in Gaziantep, Turkey on October 26, 2021. The wheat is harvested and washed before being poured into large fields to dry. Workers then rake the grain to make it dry faster. Amateur photographer Serap A-ncebe captured pictures of the scene in Gaziantep, Turkey, where bulgur wheat is popular in local cuisine. (Photo by Serap Oncebe/Solent News/Rex Features/Shutterstock) 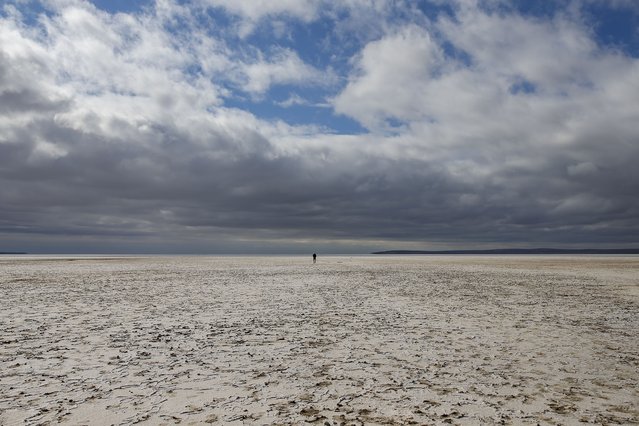 A man walks along Lake Tuz in Aksaray province, Turkey, Monday, October 25, 2021. Lake Tuz, Turkey’s second largest lake, and home to several bird species has seen its waters entirely recede this year, a victim of climate change-induced drought that has hit the region as well as decades-long wrongful agricultural policies that have exhausted the lake’s underground waters. (Photo by Emrah Gurel/AP Photo) 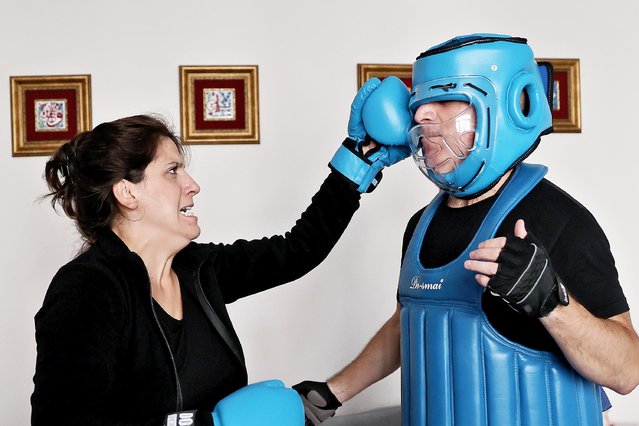 A woman punches Stress Coach Hasan Riza Gunay, who has been making a living with getting beaten, in Istanbul, Turkey on October 27, 2021. Having the name “Stress Coach” approved, Hasan Riza Gunay became the first registered man to be beaten in Turkey to make a living. Most of the clients of Gunay, who practiced his profession with interesting formats in the USA, where he lived for 6 years, are women. (Photo by Isa Terli/Anadolu Agency via Getty Images) 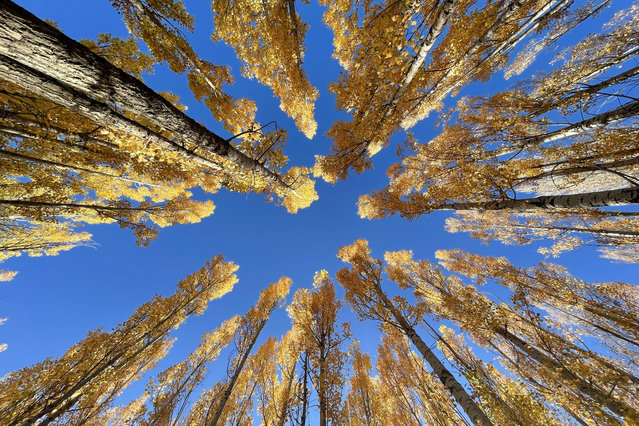 A view of the autumn foliage in Ovacik district of Turkey's eastern Tunceli Province on October 27, 2021. (Photo by Sidar Can Eren/Anadolu Agency via Getty Images) 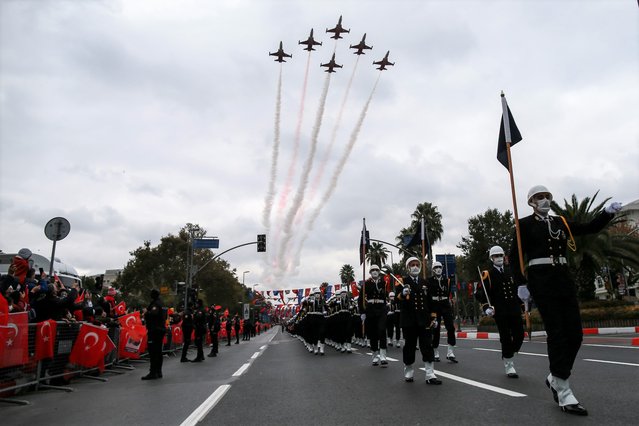 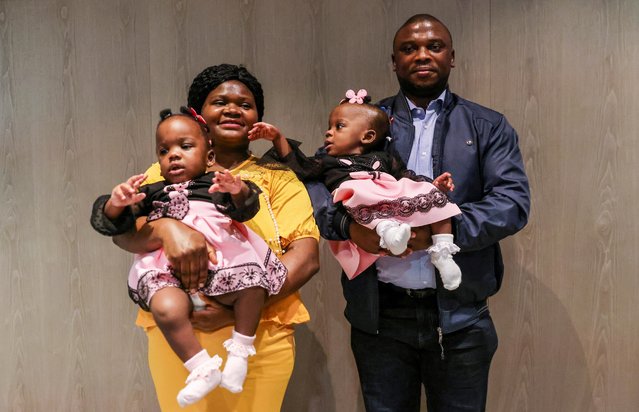 Ex-conjoined Cameroonian twins Elizabeth and Mary Akwe pose with their parents Carolina and Richard during a press conference after their successful separation surgery at Acibadem Altunizade Hospital in Istanbul, Turkey on November 2, 2021. (Photo by Umit Bektas/Reuters) 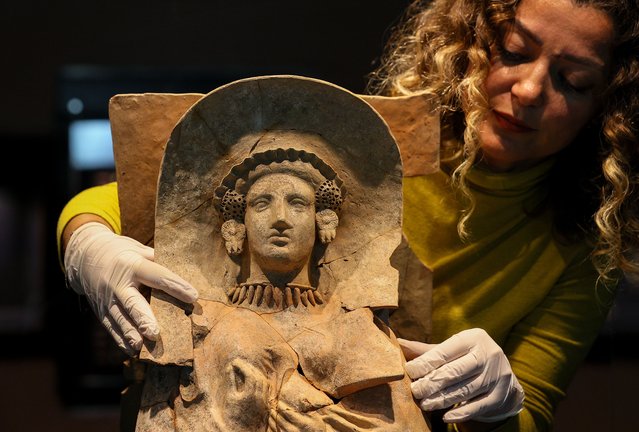 Relief masks of wives of Ionian warriors, found during excavations in Neonteikhos Ancient Settlement, being exhibited after the restoration at the Izmir Archeology Museum in Menemen district of Izmir, Turkey on November 5, 2021. Relief masks are considered as important artifacts of warrior tombs and dated to the 5th century BC. (Photo by Mehmet Emin Menguarslan/Anadolu Agency via Getty Images) 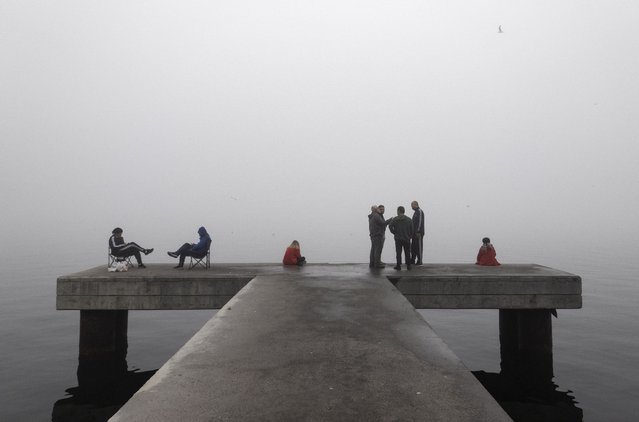 People on a pier near the Bosphorus on a foggy day in Istanbul, Turkey, 06 November 2021. (Photo by Erdem Sahin/EPA/EFE) 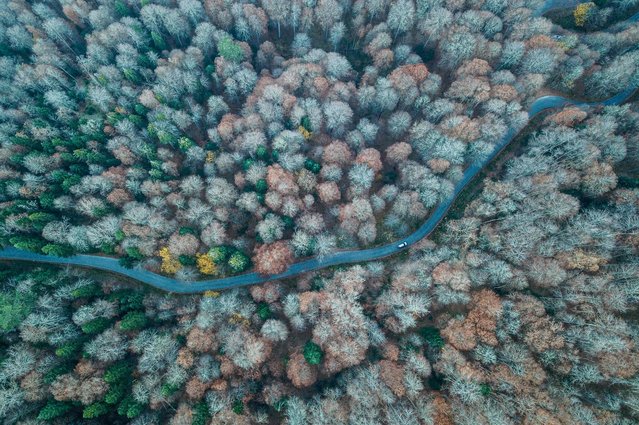 This aerial photograph shows a car driving on a road at Yedigoller National Park near Bolu district on November 9, 2021. (Photo by Ozan Kose/AFP Photo) 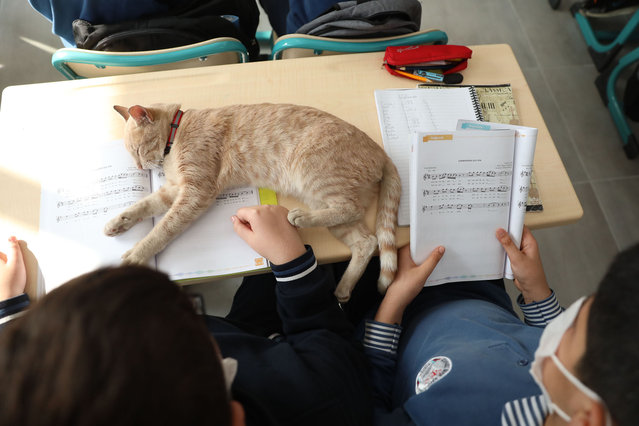 A kitten named “Tarcin” is on the students' desk at a classroom of a school in Tekirdag, Turkey on November 09, 2021. The cat living at the school garden becomes a friend of students and teachers. (Photo by Ugur Arslan/Anadolu Agency via Getty Images) 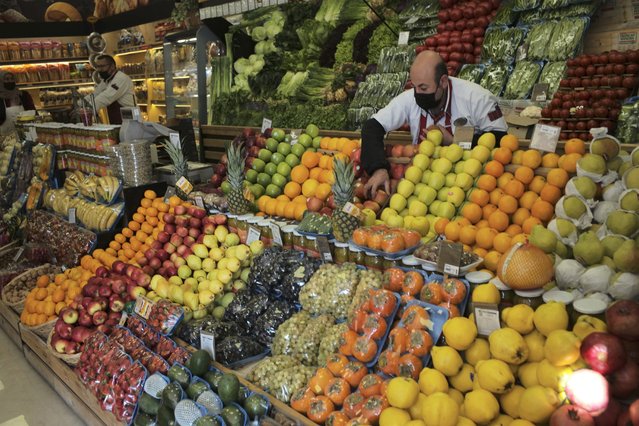 A man works at a food shop, in Ankara, Turkey, Tuesday, November 9, 2021. Rampant inflation and unemployement are hitting Turks hard as energy and consumer prices skyrocket and the Lira dips to historic lows. Inflation rates officially announced by the Turkish Statistical Institue (TUIK) indicate consumer inflation to be around 20%. Independent researchers at the Inflation Research Group (ENAG) offer contrasting rates as the figure they calculated shows a figure of almost 50%. (Photo by Burhan Ozbilici/AP Photo) 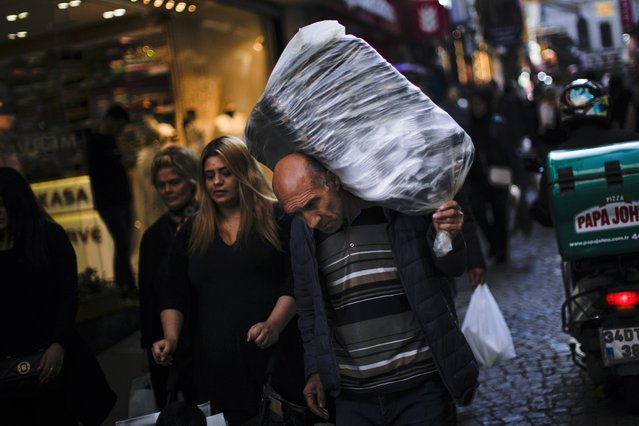 A man carries goods on his back in a commercial area in Istanbul, Turkey, Tuesday, November 2, 2021. Many Turkish consumers are faced with increased hardship as prices of food and other goods have soared in recent years. The yearly consumer price index increased by 19.9% in October, up from 19.58% in September, according to official data by the Turkish Statistical Institute released on Nov. 3. (Photo by Francisco Seco/AP Photo) 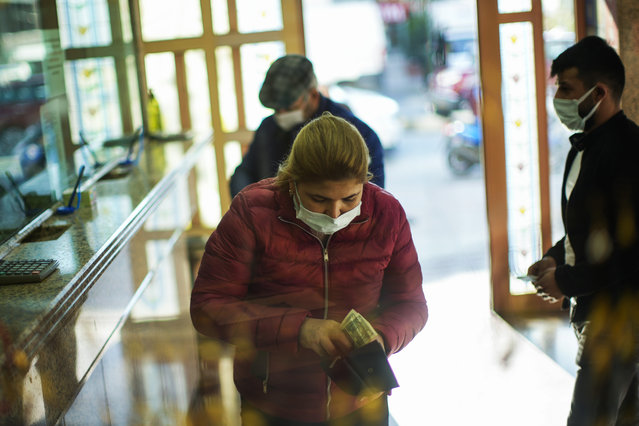 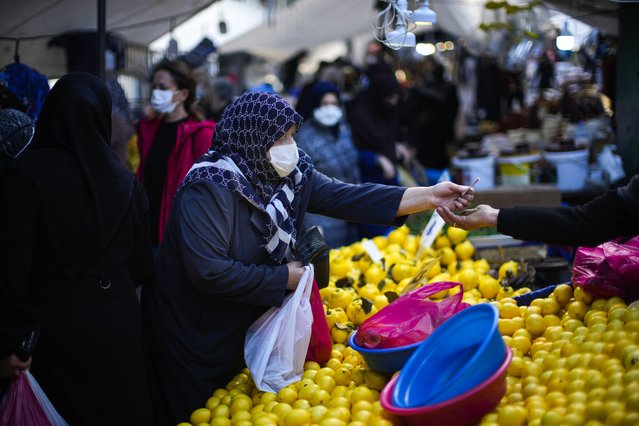 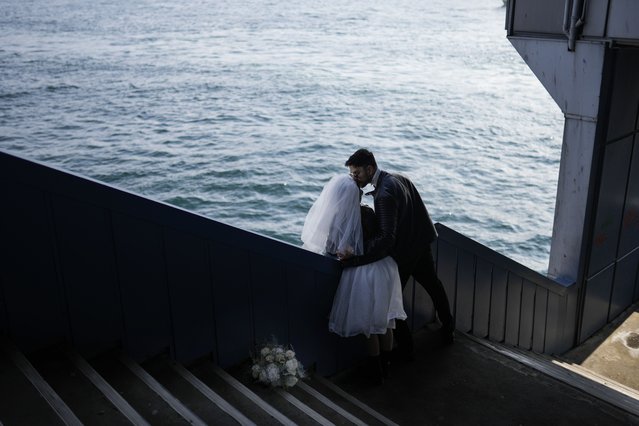