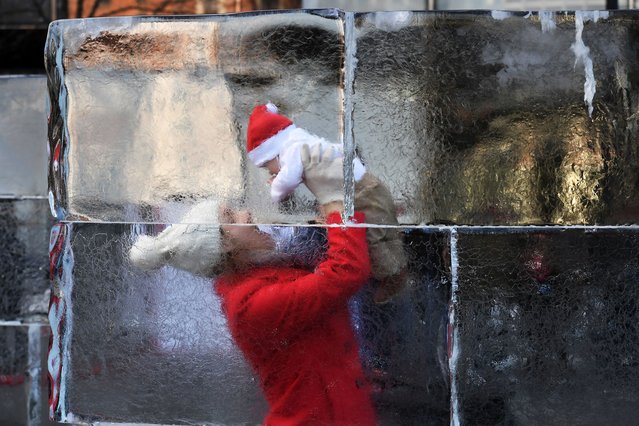 Brandy Wendler of Alexandria holds up her son, Ronin Wendler, four months, as they visit the Ice Maze at CityCenterDC in Washington on December 15, 2019. (Photo by Matt McClain/The Washington Post) 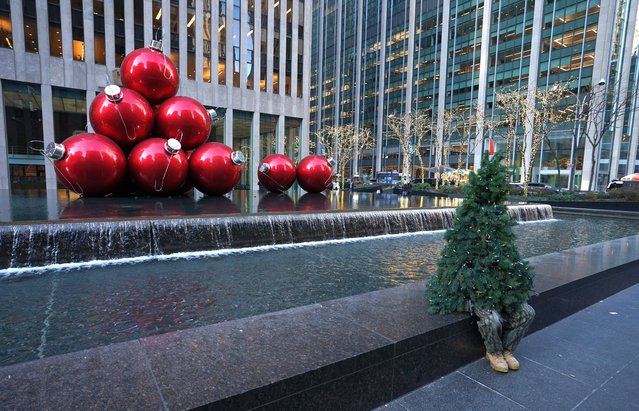 Sreet performer Thomas Liberto from Bel Air, Maryland, who goes by the social media name “Mr. Christmas Tree” sits by Christmas decorations around midtown New York on December 19, 2019. Mr. Christmas Tree aka Liberto, who begins the holiday season traveling from Maryland to NYC, has been walking around in festive costume for the last five years. (Photo by Timothy A. Clary/AFP Photo) 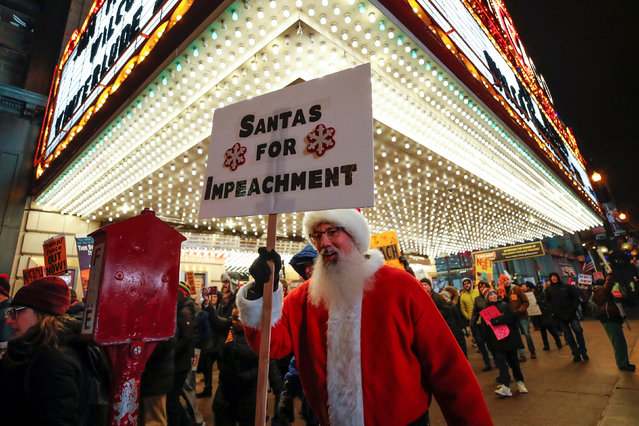 Protesters take part in a rally to support the impeachment and removal of U.S. President Donald Trump in Chicago, Illinois, U.S. December 17, 2019. (Photo by Kamil Krzaczynski/Reuters) 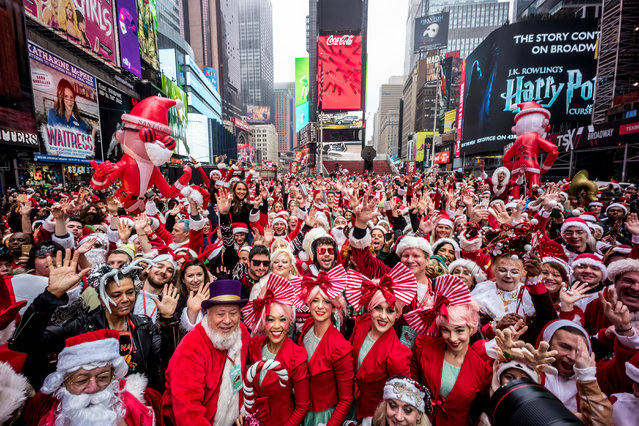 Revellers gather for the start of the Annual SantaCon Bar Crawl at Father Duffy Square, a section of Times Square, on December 14, 2019, in New York City. SantCon is an event where people make donations to charitable causes and dress up as a Christmas character and visit bars around the city. (Photo by Steven Ferdman/Getty Images) 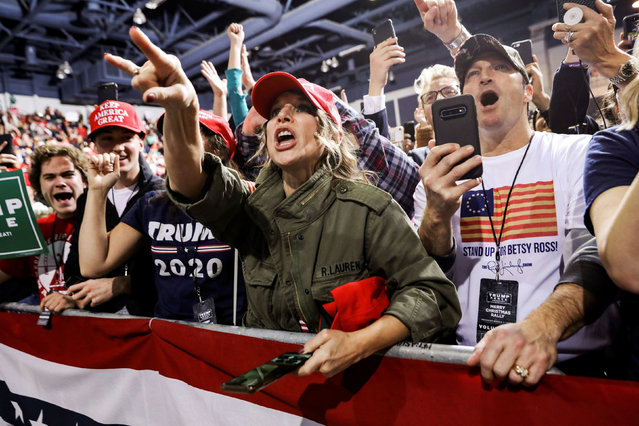 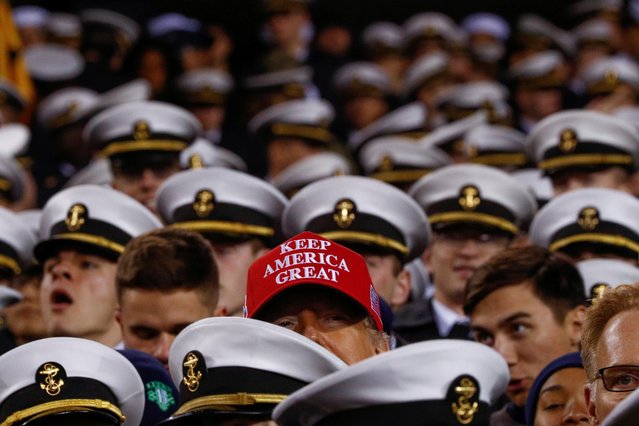 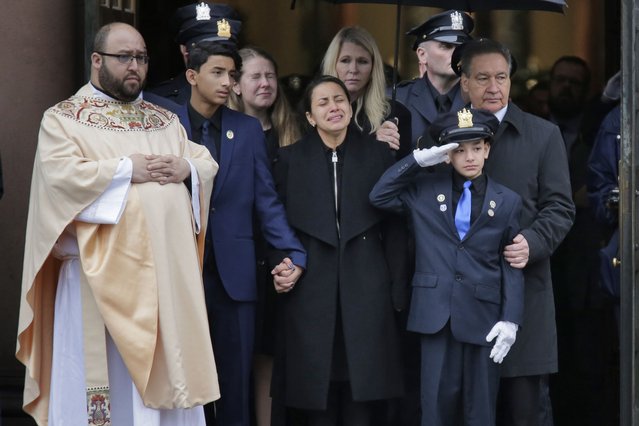 Mourners of Jersey City Police Detective Joseph Seals, including his wife Laura Seals, center, watch as his casket is carried out of the church in Jersey City, N.J., Tuesday, December 17, 2019. The 40-year-old married father of five was killed in a confrontation a week ago with two attackers who then drove to a kosher market and killed three people inside before dying in a lengthy shootout with police. (Photo by Seth Wenig/AP Photo) 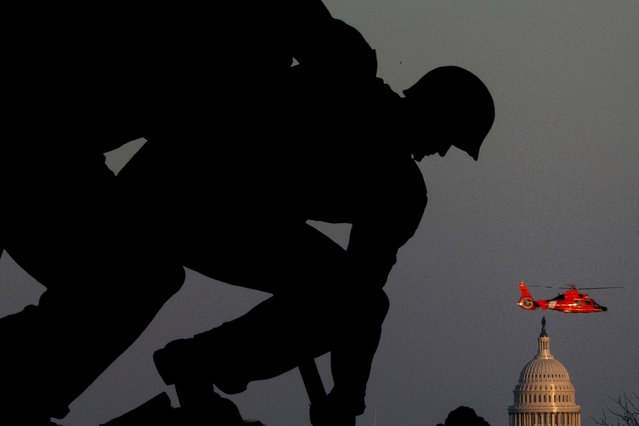 A U.S. Coast Guard Helicopter flies across the horizon behind the Iwo Jima Memorial during sunset in Arlington, VA, U.S., December 15, 2019. (Photo by Tom Brenner/Reuters) 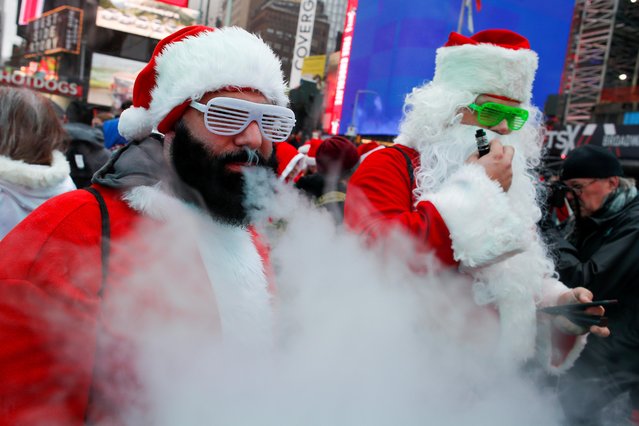 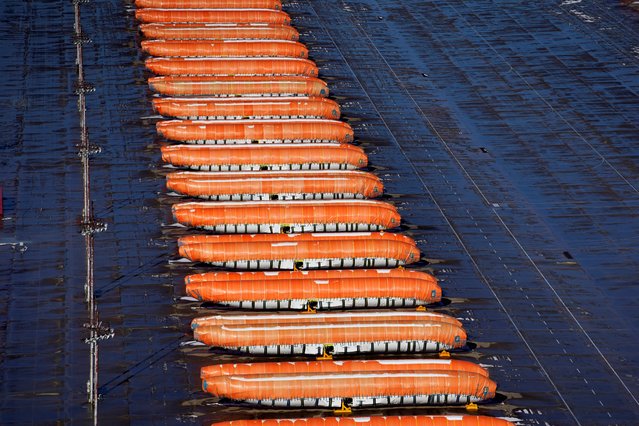 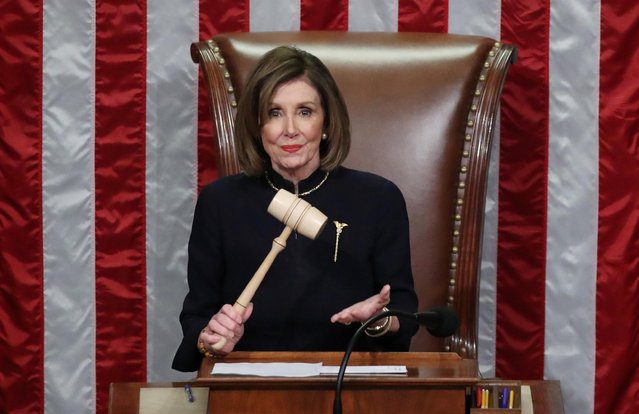 U.S. Speaker of the House Nancy Pelosi (D-CA) wields the Speaker's gavel as she presides over the final of two House of Representatives votes approving two counts of impeachment against U.S. President Donald Trump in the House Chamber of the U.S. Capitol in Washington, U.S., December 18, 2019. (Photo by Jonathan Ernst/Reuters) 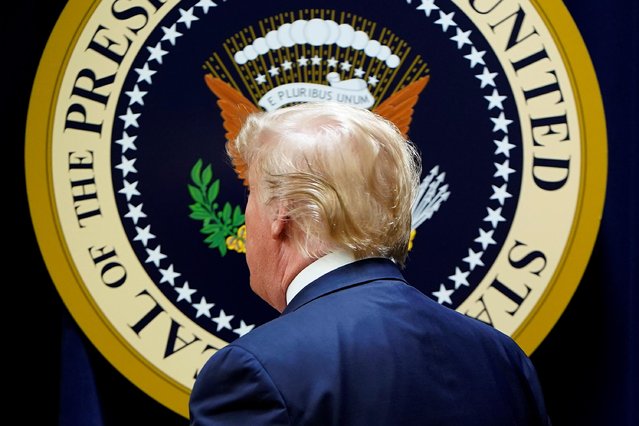 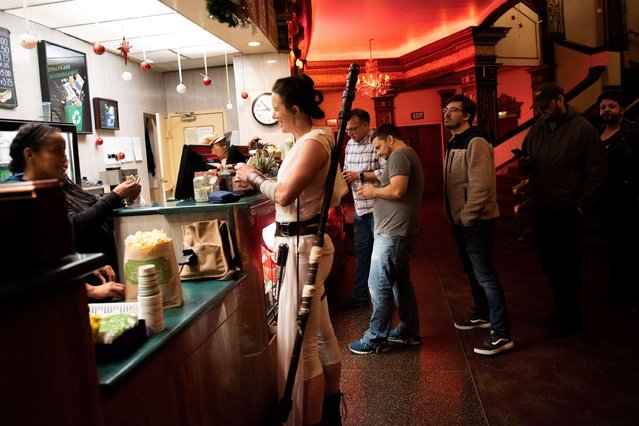 A fan dressed as Rey gets snacks at the Grand Lake Theater for the opening of the final chapter of the Skywalker saga “Star Wars: The Rise of Skywalker” in Oakland, California, December 19, 2019. (Photo by Kate Munsch/Reuters) 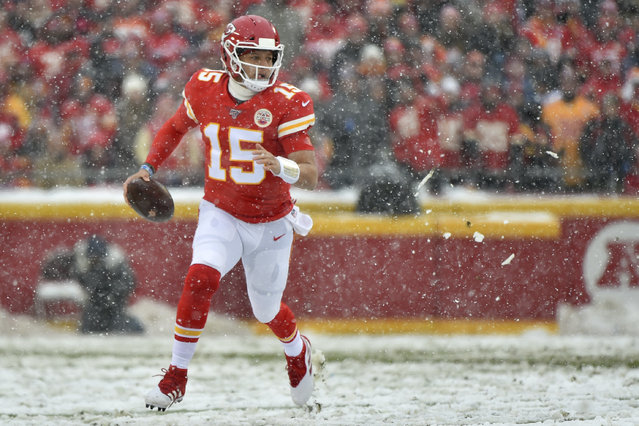 Kansas City Chiefs quarterback Patrick Mahomes (15) carries the ball during the first half of an NFL football game against the Denver Broncos in Kansas City, Mo., Sunday, December 15, 2019. (Photo by Ed Zurga/AP Photo) 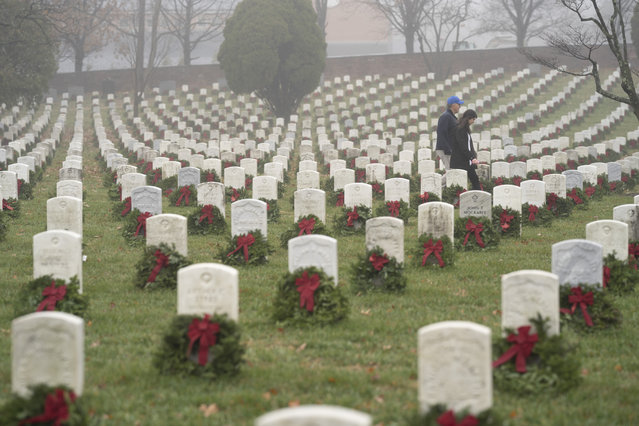 People walk among headstones with holiday wreaths in Arlington National Cemetery during Wreaths Across America Day in Arlington, Va., Saturday, December 14, 2019. Maine businessman Morrill Worcester started the annual event in 1992 at Arlington National Cemetery, and it has expanded to hundreds of veterans' cemeteries and other locations in all 50 states and overseas. (Photo by Sait Serkan Gurbuz/AP Photo) 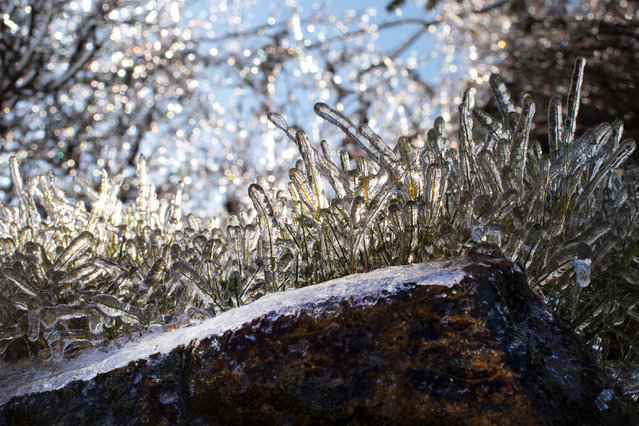 Field grass is seen coated in a layer of ice after a winter storm in Nyack, New York, U.S., December 18, 2019. (Photo by Mike Segar/Reuters) 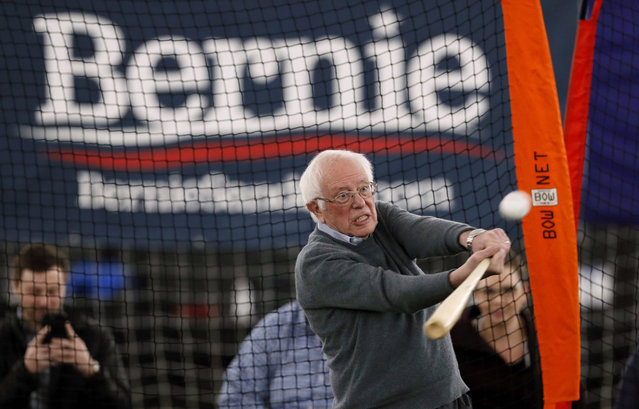 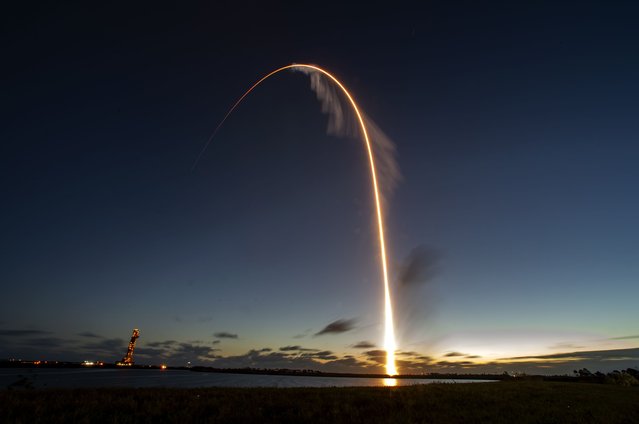 The Boeing Starliner launches for its maiden voyage to the International Space Station, as part of NASA’s Commercial Crew Program, at Kennedy Space Center in Florida on December 20, 2019. (Photo by Jonathan Newton/The Washington Post) 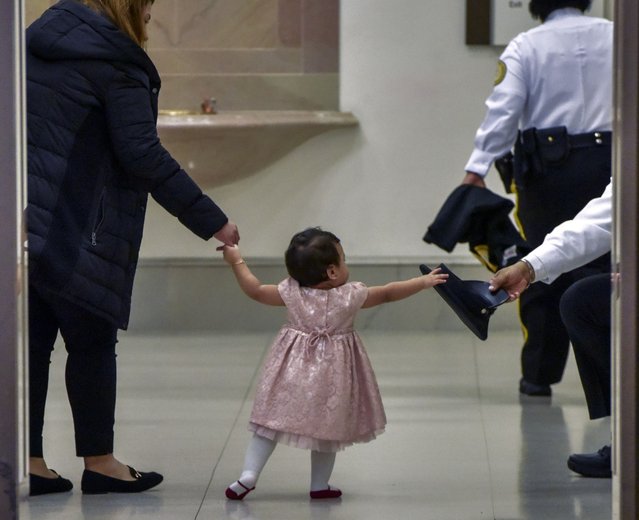 Kimberly Del Cid, 1, center, reaches for the hat of Officer Edward Twine while waiting for her father, Mauricio Del Cid, to be sworn in as a new U.S. citizen in front of the original Declaration of Independence, the Constitution and the Bill of Rights, in the Rotunda of the National Archives in Washington on December 16, 2019. (Photo by Bill O’Leary/The Washington Post) 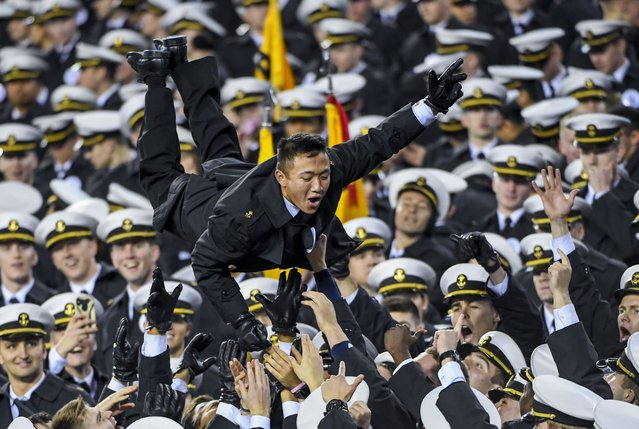 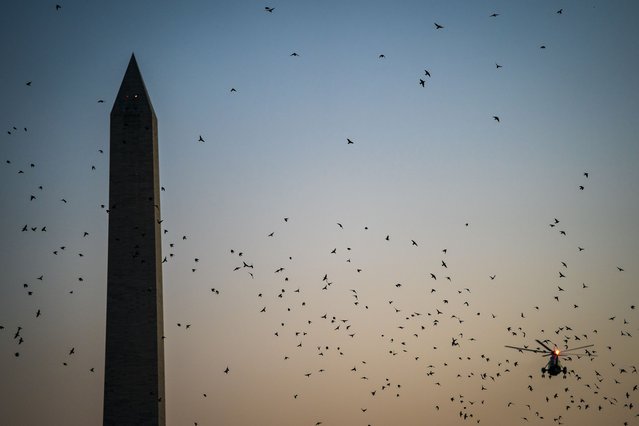 Marine One carrying President Trump lifts off from the South Lawn as he departs from the White House on December 18, 2019. (Photo by Jabin Botsford/The Washington Post) 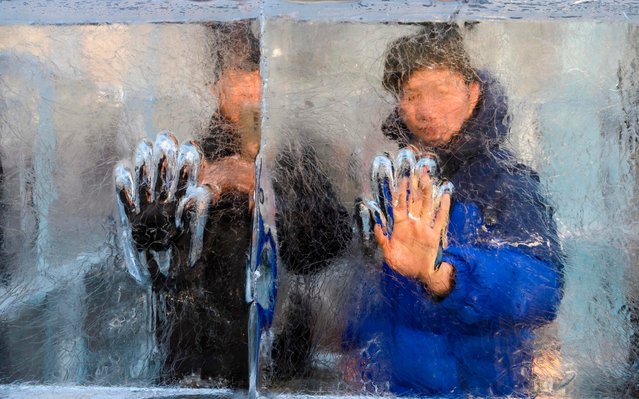 A man puts his hands in a handprint in the Ice Maze, the largest clear ice maze in the United States, at the City Center in Washington, DC on December 15, 2019. (Photo by Andrew Caballero-Reynolds/AFP Photo)
Edit Del
24 Dec 2019 00:05:00, post received 0 comments
Publication archive:
←   →
Popular tags:
All tags
Last searches: