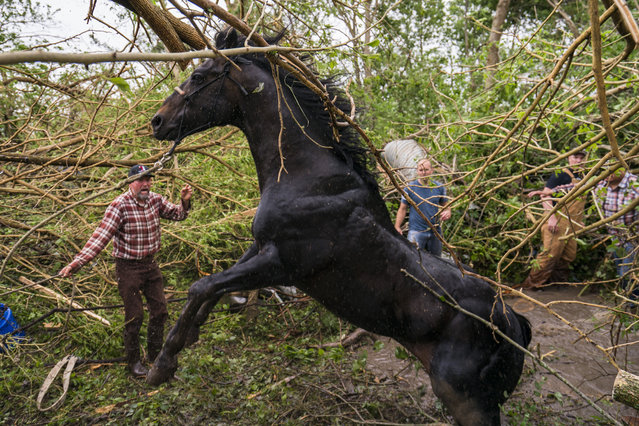 Family and neighbors work together with support from first responders to free a horse from a pool of water and mud in dense trees on May 29, 2019 in Linwood, Kansas. Owner Javier Campos suspects the tornado picked the horse up and carried it nearly three football fields away from their destroyed horse barn. The Midwest has seen extensive severe weather this spring with widespread flooding and multiple tornadoes. (Photo by Kyle Rivas/Getty Images) 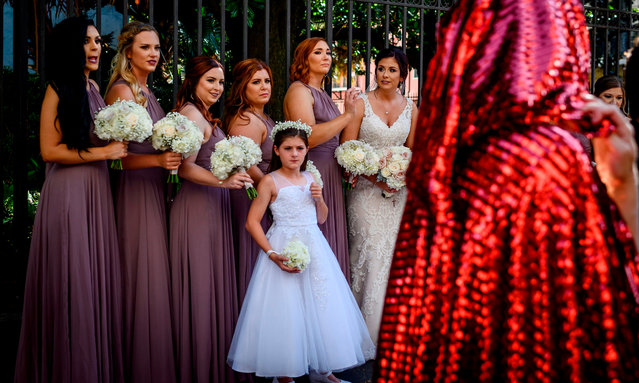 Handsmaid themed protesters march down the French Quarter as a bride and her bridesmaids look on, in New Orleans, Louisiana, on May 25, 2019, to protest the proposed Heartbeat Bill that will ban abortion after 6 weeks in that state scheduled for a vote on May 28. (Photo by Emily Kask/AFP Photo) 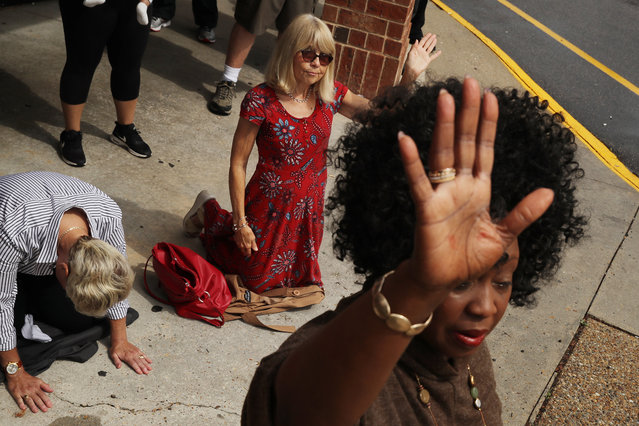 (L-R) Cathy Whitley, Brenda Flowers and Renee Gathers pray during a service organized by Lifehouse Virginia Beach in the parking lot of a local shopping center the day after a mass shooting left 13 people dead June 01, 2019 in Virginia Beach, Virginia. The names of the 12 victims of Friday's shooting rampage at the city's Municipal Center were made public along with the identity of the shooter, city engineer DeWayne Craddock. (Photo by Chip Somodevilla/Getty Images) 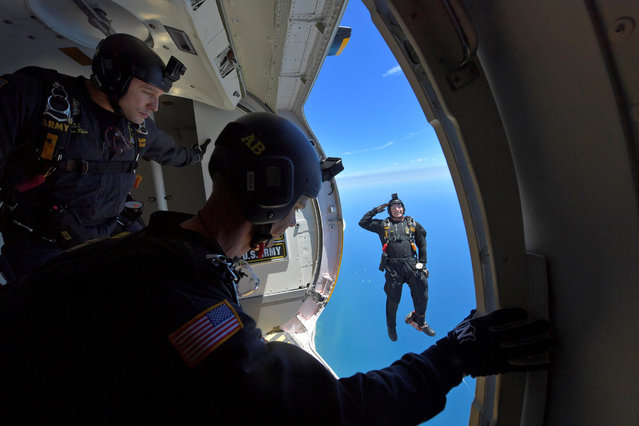 Members of the U.S. Army's Golden Knights parachute team perform during the Bethpage Air Show as part of a Memorial Day event at Jones Beach on Long Island, New York, U.S., May 25, 2019. (Photo by Johnny Milano/Reuters) 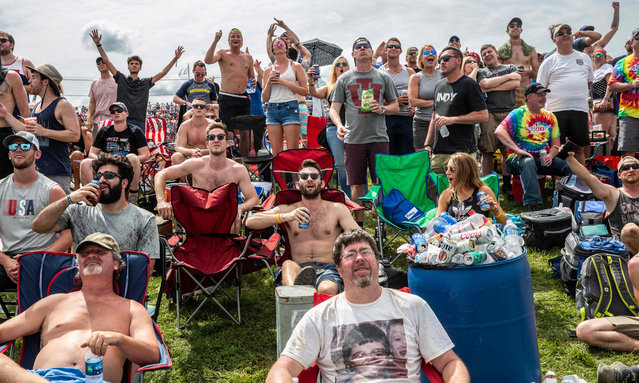 Race fans watch the 103rd race of the Indianapolis 500 at Indianapolis Motor Speedway on May 26, 2019 in Indiana. (Photo by Kerem Yucel/AFP Photo) 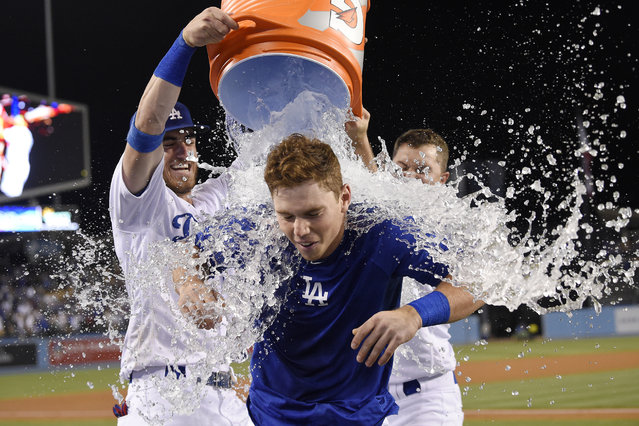 Los Angeles Dodgers' Will Smith, center, is doused by Cody Bellinger, left, and Joc Pederson after hitting the game-winning, solo home run during the ninth inning of the team's baseball game against the Philadelphia Phillies on Saturday, June 1, 2019, in Los Angeles. The Dodgers won 4-3. (Photo by Mark J. Terrill/AP Photo) 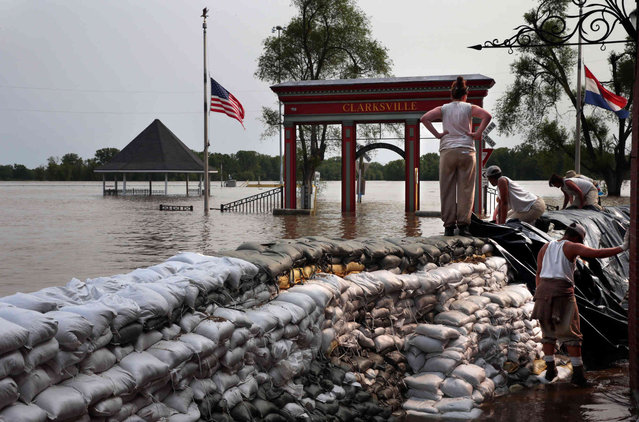 Inmates from the Women's Eastern Reception Diagnostic and Correctional Center in Vandalia, Mo., watch the Mississippi River after helping to raise a sandbag wall in Clarksville as the river approaches record levels downtown on Friday, May 31, 2019. (Photo by Robert Cohen/St. Louis Post-Dispatch via AP Photo) 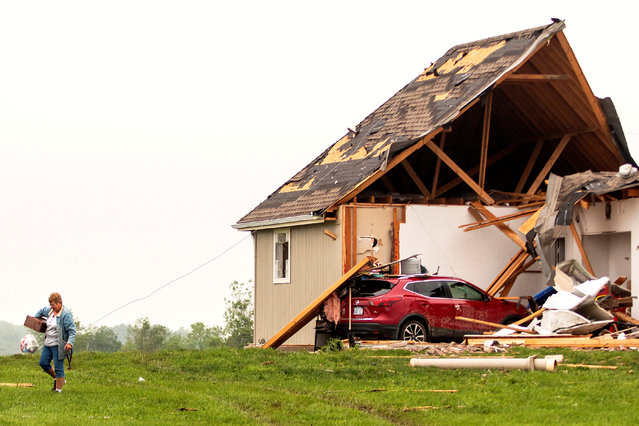 A woman walks away from a damaged house after several tornadoes reportedly touched down, in Linwood, Kansas, U.S., May 29, 2019. (Photo by Nate Chute/Reuters) 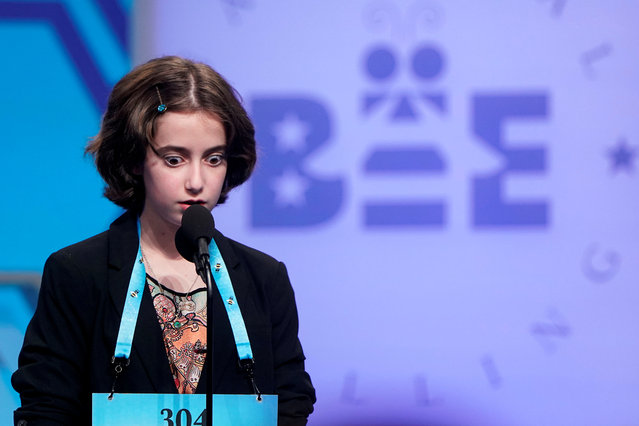 Colette Giezentanner, 12, of St. Louis, Missouri, reacts to spelling a word correctly in the final round of the 92nd annual Scripps National Spelling Bee at National Harbor in Oxon Hill, Maryland, U.S., May 30, 2019. (Photo by Joshua Roberts/Reuters) 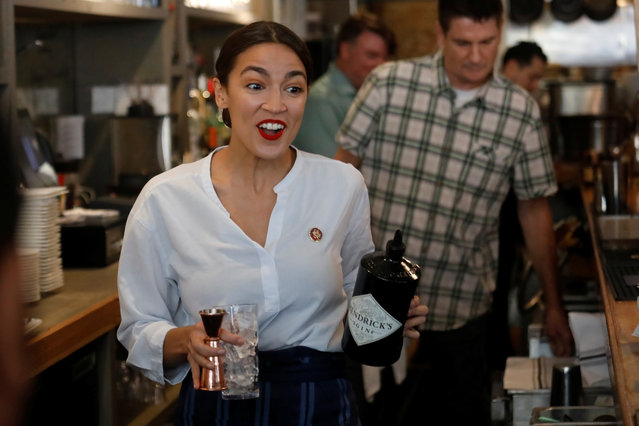 Rep. Alexandria Ocasio-Cortez (D-NY) walks to make a drink in support of One Fair Wage, a policy that would allow tipped workers to receive full minimum wage plus their tips in New York, at The Queensboro restaurant in the Queens borough of New York, U.S., May 31, 2019. (Photo by Shannon Stapleton/Reuters) 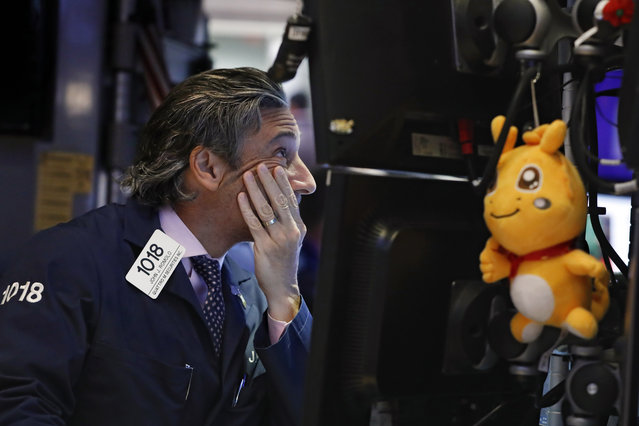 Trader John Romolo works on the floor of the New York Stock Exchange, Wednesday, May 29, 2019. Stocks are getting off to a weak start on Wall Street led by drops in technology and health care companies. (Photo by Richard Drew/AP Photo) 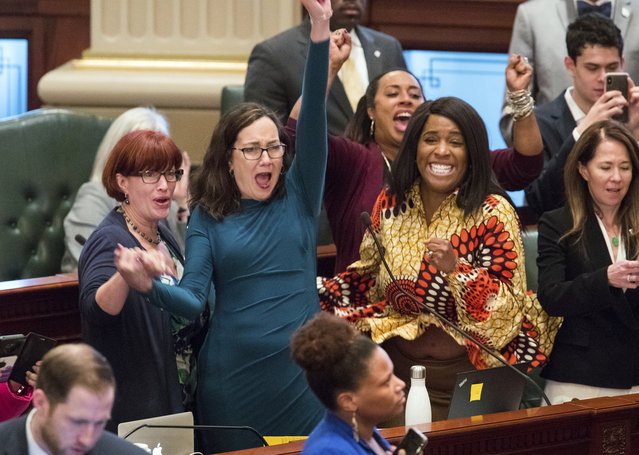 Illinois state Rep. Kelly Cassidy, D-Chicago, throws her fist in the air as she celebrates with Illinois state Senator Heather Steans, D-Chicago, left, and Rep. Jehan Gordon-Booth, D-Peoria, as they watch the final votes come in for their bill to legalize recreational marijuana use in the Illinois House chambers Friday, May 31, 2019. The 66-47 vote sends the bill to Gov. J.B. Pritzker who indicated he will sign it. (Photo by Ted Schurter/The State Journal-Register via AP Photo) 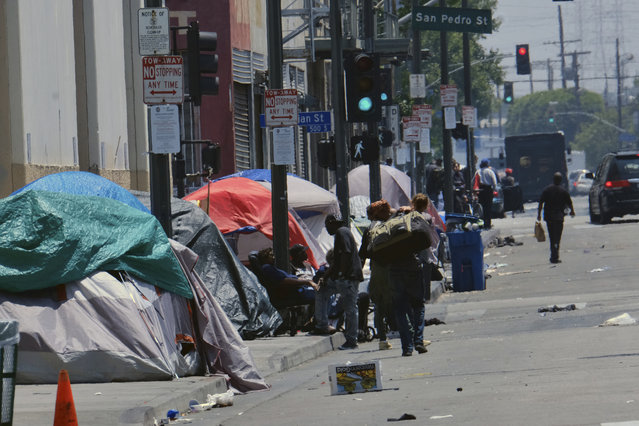 Tents housing homeless line a street down the street from LAPD Central Community Police Station in downtown Los Angeles on Thursday, May 30, 2019. The union that represents the LAPD is demanding a cleanup of homeless encampments in the city after one detective who works downtown was diagnosed with typhoid fever and two others are showing similar symptoms. (Photo by Richard Vogel/AP Photo) 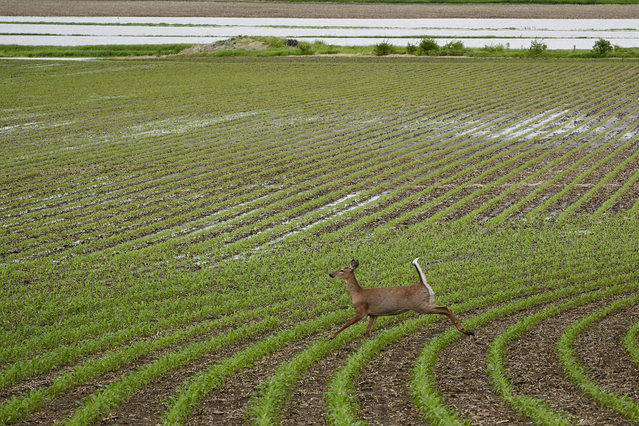 In this May 29, 2019 photo, a deer runs through a field which is partially flooded near Anderson, Iowa. Thousands of Midwest farmers are trying to make decisions as they endure a spring like no other. It started with a continuation of poor prices for corn and soybeans that fell even further as tariffs imposed by the U.S. and China ratcheted higher. Next came flooding from melting snow followed by day after day of torrential rains that made planting impossible or flooded fields where plants were just starting to emerge. (Photo by Nati Harnik/AP Photo) 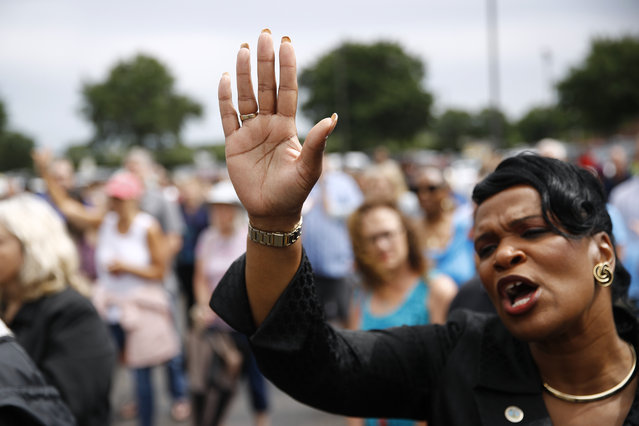 Virginia Beach, Va., council member Sabrina Wooten holds her hand out as she sings during a vigil in response to a shooting at a municipal building in Virginia Beach, Va., Saturday, June 1, 2019. A longtime city employee opened fire at the building Friday before police shot and killed him, authorities said. (Photo by Patrick Semansky/AP Photo) 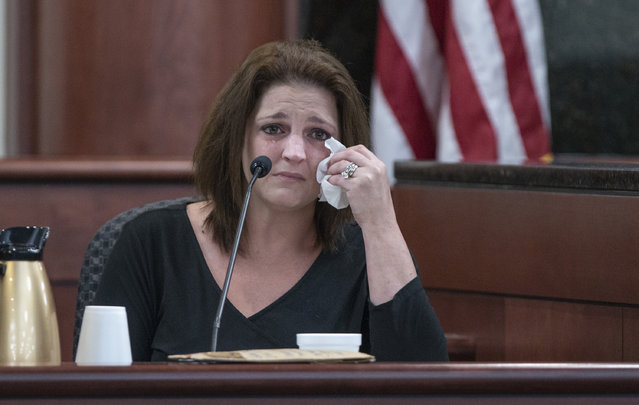 Amber Jones cries from the witness stand while being questioned by 11th Circuit deputy Solicitor Suzanne Mayes during the trial of her ex husband, Tim Jones, Columbia S.C., Monday, May 20, 2019. Timothy Jones, Jr. is accused of killing their 5 young children in 2014. Jones, who faces the death penalty, has pleaded not guilty by reason of insanity. (Photo by Tracy Glantz/The State via AP Photo/Pool) 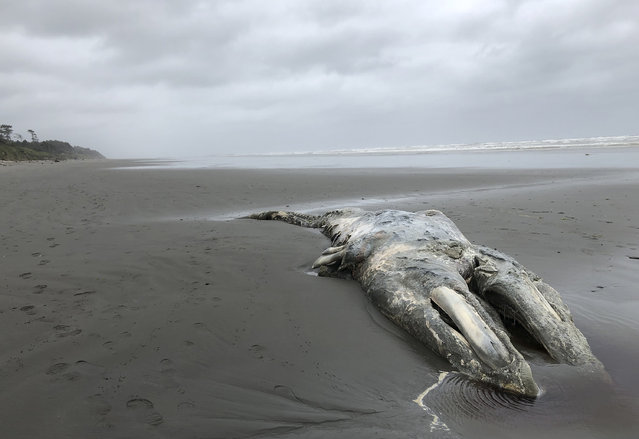 In this photo taken May 24, 2019, the carcass of a gray whale lies where it washed up on the coast of Washington's Olympic Peninsula, just north of Kalaloch Campground in Olympic National Park. Federal scientists on Friday, May 31 opened an investigation into what is causing a spike in gray whale deaths along the West Coast this year. So far, about 70 whales have stranded on the coasts of Washington, Oregon, Alaska and California, the most since 2000. (Photo by Gene Johnson/AP Photo) 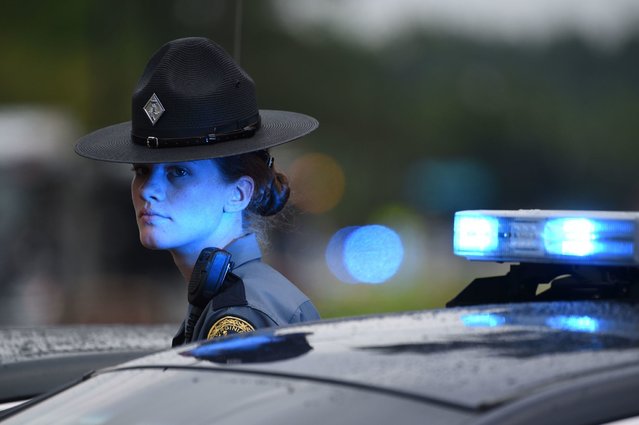 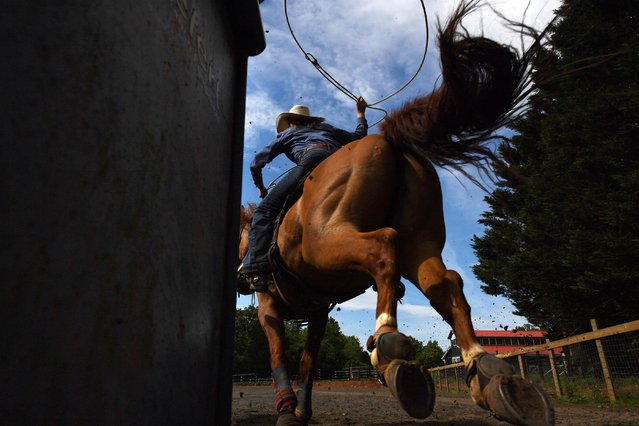 Fallon Goemmer, 18, works on her roping skills as she practices for a rodeo in Amissville, Va. on May 23, 2019. (Photo by Matt McClain/The Washington Post) 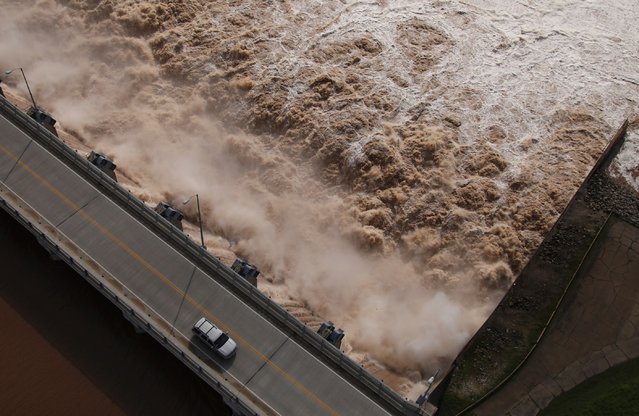 Water is released from the Keystone Dam into the Arkansas River northwest of Tulsa, Okla., Friday, May 24, 2019. The U.S. Army Corps of Engineers began increasing the amount of water being released from the dam on Friday to control the flooding. (Photo by Tom Gilbert/Tulsa World via AP Photo) 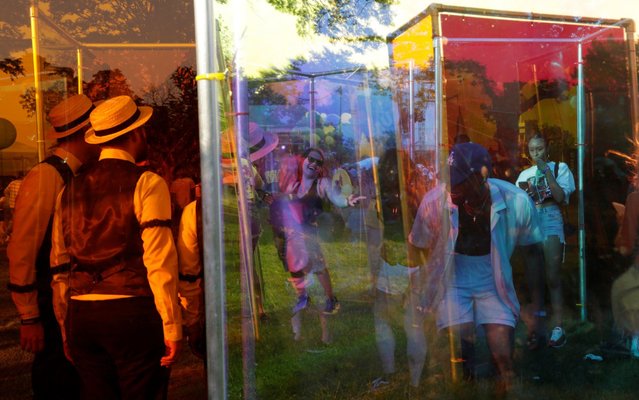