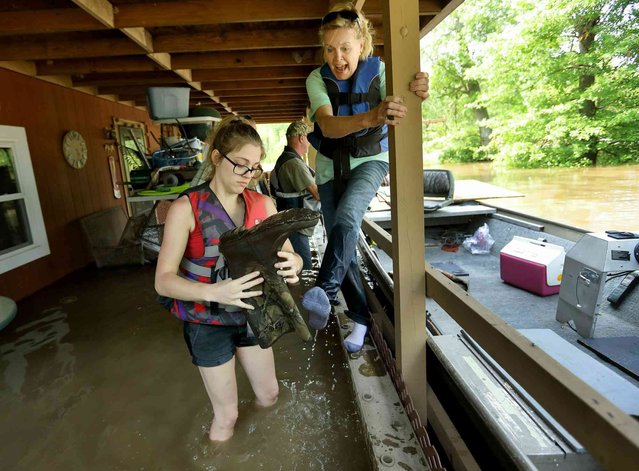 Emily Kientzel empties the water out of her grandmother Joan FitzGerald's boot that filled with floodwater from the Mississippi River, as they check on the home of a friend outside of Portage des Sioux, Mo., Sunday, June 2, 2019. The pair are standing on the second story balcony of the home that has more than a foot of water in it. (Photo by David Carson/St. Louis Post-Dispatch via AP Photo) 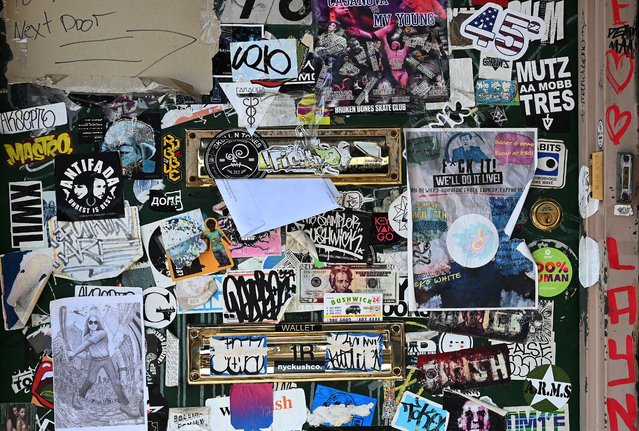 A letter is placed in the mail slot in a graffiti covered door in the Bushwick section of Brooklyn, New York, on June 6, 2019. The section is one of NYC's most prolific neighborhood for street art and graffiti. (Photo by Timothy A. Clary/AFP Photo) 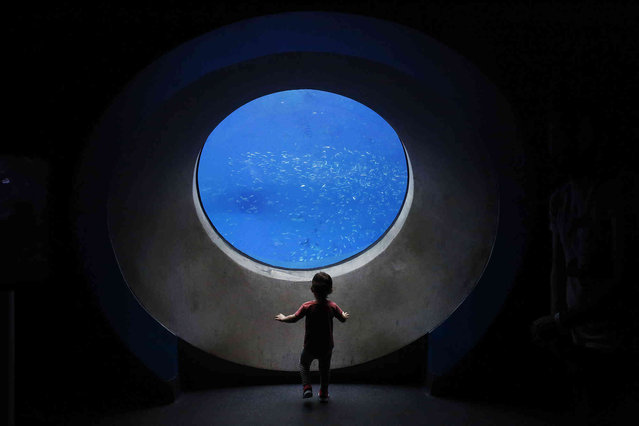 A young child looks into a window of fish at the Phillip and Patricia Frost Museum of Science on Sunday, June 9, 2019, in Miami. (Photo by Brynn Anderson/AP Photo) 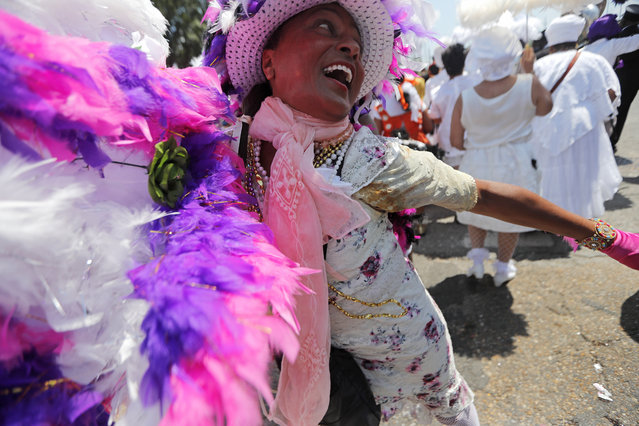 Jennifer Jones dances in a jazz funeral procession for Leah Chase, as it goes from St. Peter Claver Church to her restaurant “Dooky Chase's” in New Orleans, Monday, June 10, 2019. Fellow chefs, musicians, family and friends were among hundreds of admirers who filed through the church on Monday to pay last respects to Chase, the “Queen of Creole Cuisine” who ran a family restaurant where civil rights strategies were discussed over gumbo and fried chicken in the 1950s and '60s. (Photo by Gerald Herbert/AP Photo) 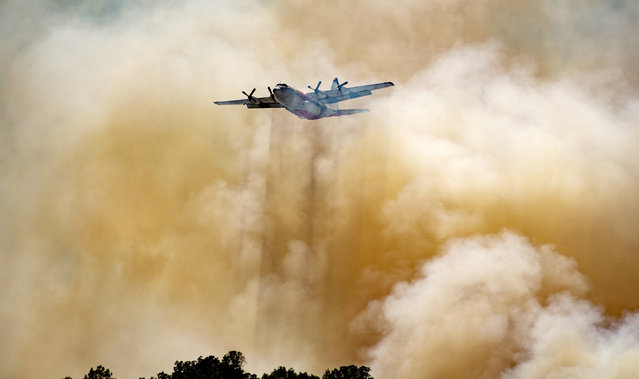 A firefighting aircraft flies through smoke after dropping fire retardant on a hillside in an attempt to box in flames from a wildfire locally called the Sand Fire in Rumsey, Calif., Sunday, June 9, 2019. (Photo by Josh Edelson/AP Photo) 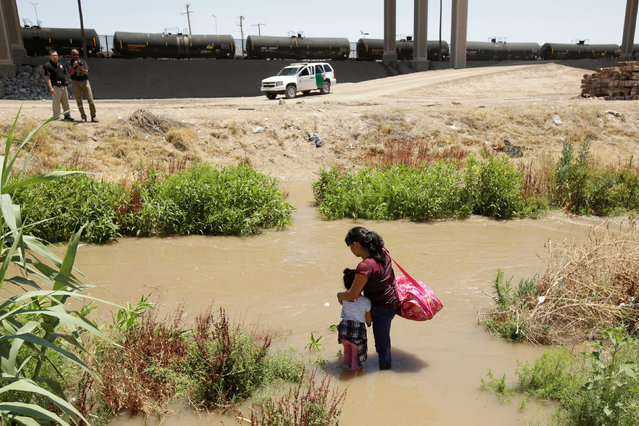 Migrants from Guatemala are seen on the banks of the Rio Bravo river before crossing illegally into the United States to turn themselves in to request asylum in El Paso, Texas, U.S., as seen from Ciudad Juarez, Mexico June 11, 2019. (Photo by Jose Luis Gonzalez/Reuters) 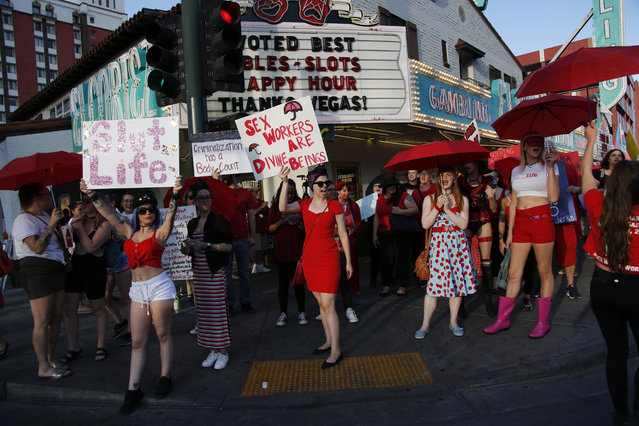 People chant as they march in support of s*x workers, Sunday, June 2, 2019, in Las Vegas. People marched in support of decriminalizing s*x work and against the Fight Online s*x Trafficking Act and the Stop Enabling s*x Traffickers Act, among other issues. (Photo by John Locher/AP Photo) 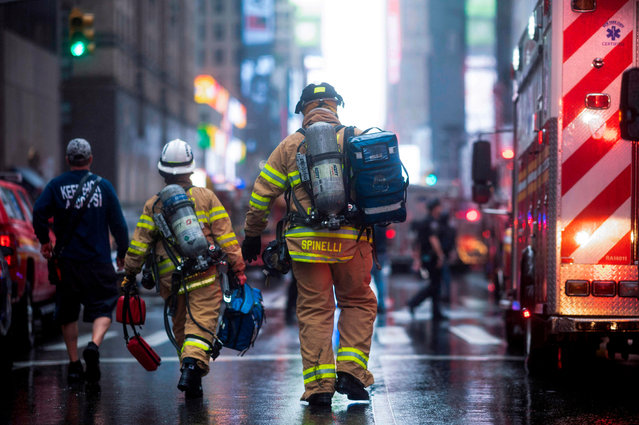 Firemen are seen after a helicopter crash-landed on top of a building in midtown Manhattan in New York on June 10, 2019. Speaking at the scene New York Governor Andrew Cuomo told reporters there had been “casualties” on board the helicopter, but that no one in the building had been hurt. (Photo by Johannes Eisele/AFP Photo) 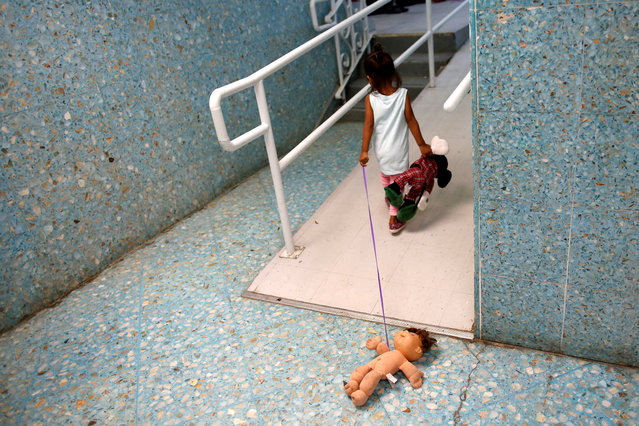 A Central American child plays on a hallway of the Catholic shelter “San Francisco Javier Church”, which gives temporary shelter to asylum-seekers from Central America countries released by ICE and U.S. Customs and Border Protection (CBP) due to overcrowded facilities, in Laredo, Texas U.S. June 4, 2019. (Photo by Carlos Jasso/Reuters) 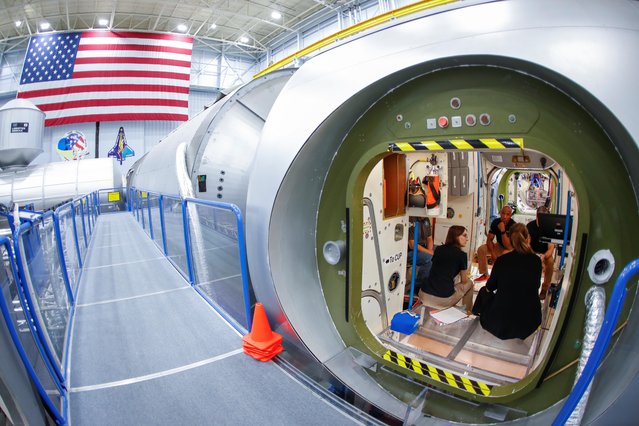 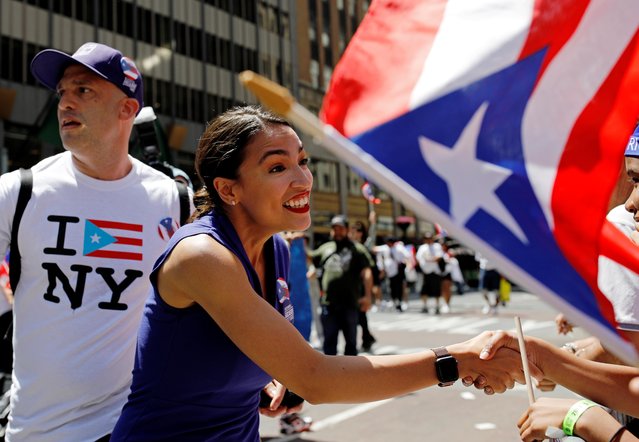 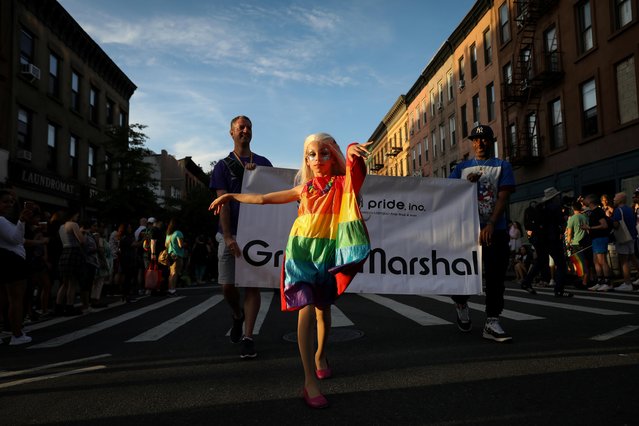 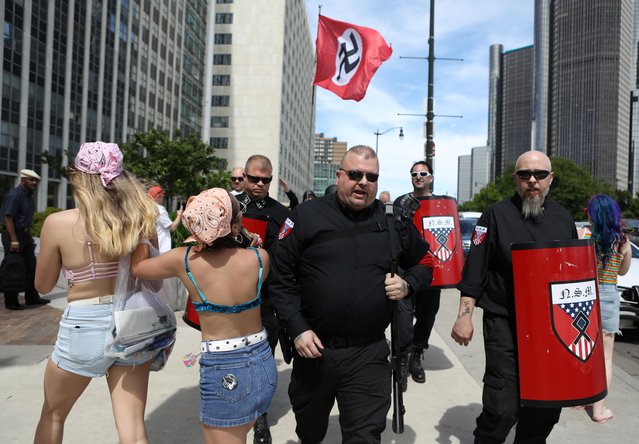 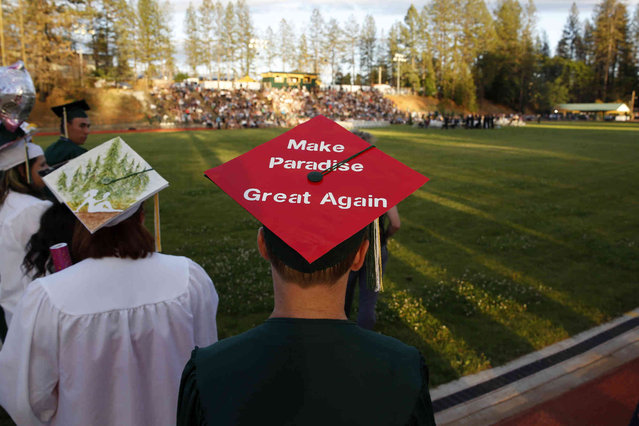 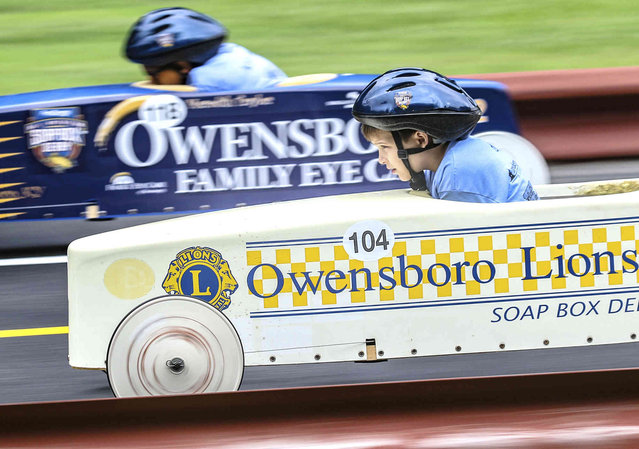 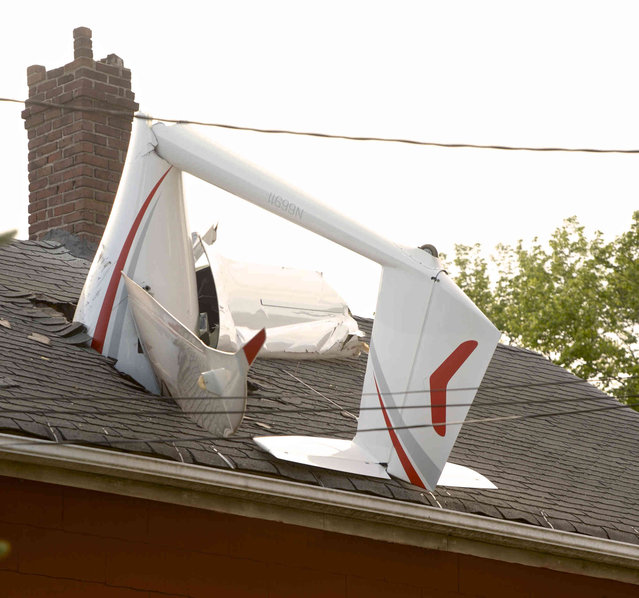 In this Tuesday evening, June 4, 2019 photo, a glider, flown by a local business owner, crashed into a house on Golden Hill Avenue while making its approach to Danbury Airport, in Danbury, Conn. Officials say the pilot sustained minor injuries. (Photo by H. John Voorhees III/Hearst Connecticut Media via AP Photo) 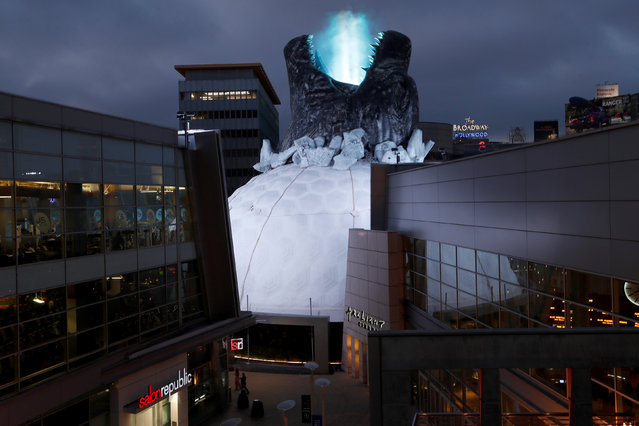 A prop promoting the film “Godzilla: King of the Monsters” is pictured on the roof of the Cinerama Dome theatre in Los Angeles, California, U.S., June 3, 2019. (Photo by Mario Anzuoni/Reuters) 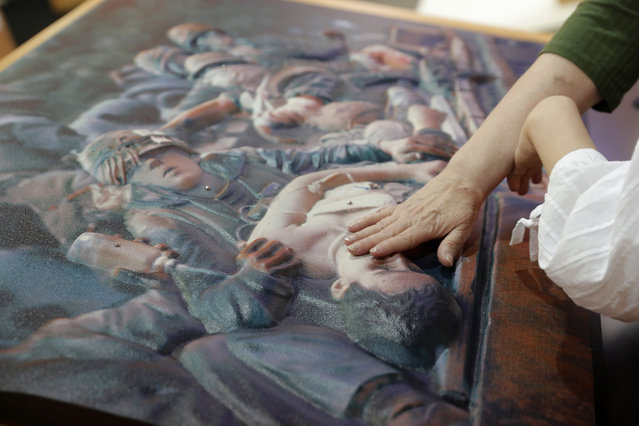 Norma Crosby, state president for the Texas chapter of the National Federation of the Blind, and Sophie Trist, right, a New Orleans chapter member, touch a bass relief of a photograph of the Vietnam Tet Offensive, by John Olson, whose company 3DPhotoworks also makes the bass relief, at the American Alliance of Museums Expo in New Orleans, Monday, May 20, 2019. It is one example of how museums are reaching out to make their collections more accessible, said Elizabeth Merritt, vice president for strategic foresight for the group, which represents museums of all sorts, from tiny community history museums to huge zoos. (Photo by Gerald Herbert/AP Photo) 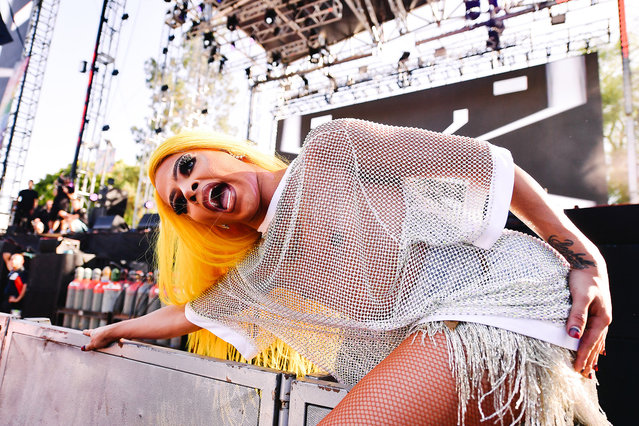