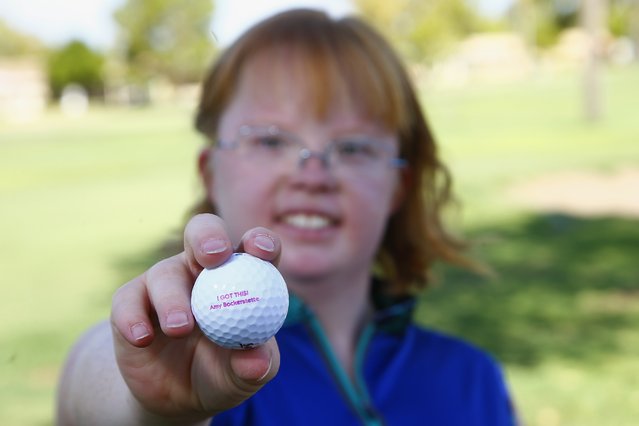 In this August 28, 2019, photo, Amy Bockerstette, the golfer with Down syndrome who was an internet sensation by making par at the 16th hole at the Phoenix Open with soon-to-be 2019 U.S. Open champion Gary Woodland, smiles as she holds up a personalized logo golf ball after her golf lesson at Palmbrook Country Club in Sun City, Ariz. (Photo by Ross D. Franklin/AP Photo) 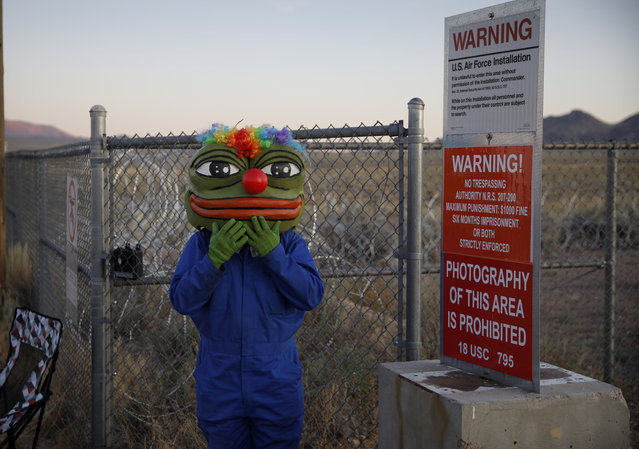 Martin Custodio wears a Pepe mask while standing near razor wire at an entrance to the Nevada Test and Training Range near Area 51, Friday, September 20, 2019, near Rachel, Nev. People came to visit the gate inspired by the “Storm Area 51” internet hoax. (Photo by John Locher/AP Photo) 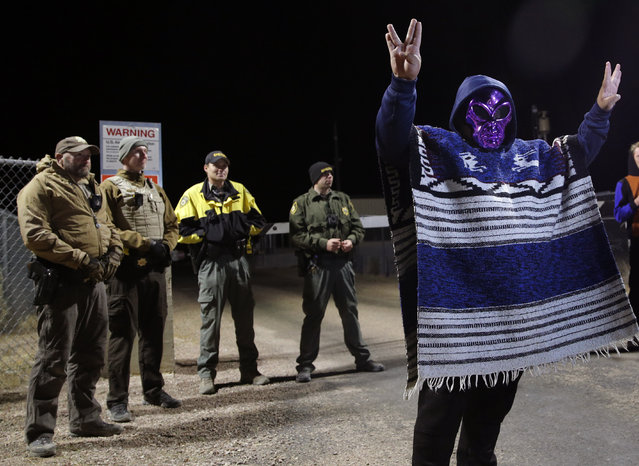 A man in an alien mask stands at an entrance to the Nevada Test and Training Range near Area 51 September 20, 2019, outside of Rachel, Nev. People gathered at the gate inspired by the “Storm Area 51” internet hoax. (Photo by John Locher/AP Photo) 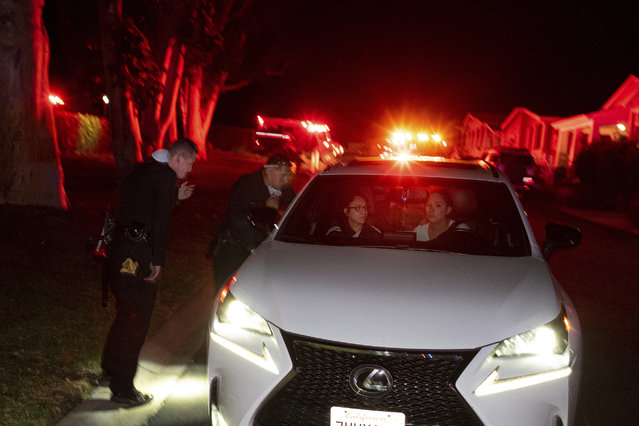 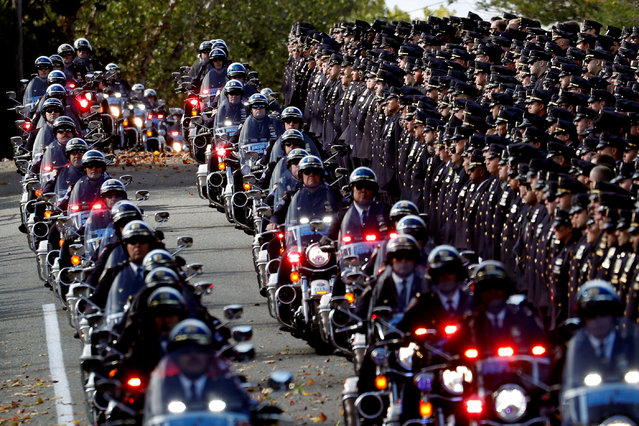 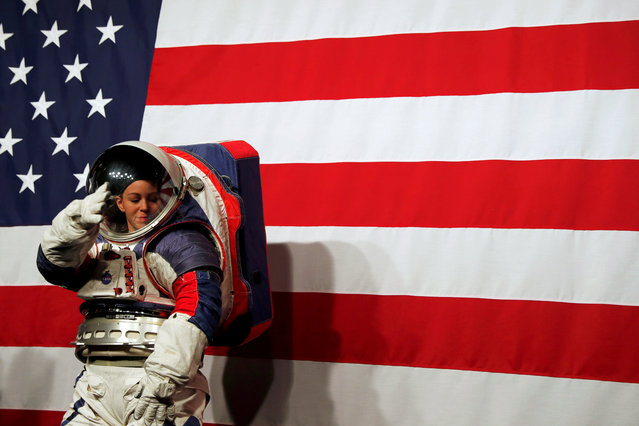 Advanced Space Suit Engineer at NASA Kristine Davis wears the xEMU prototype space suit for the next astronaut to the moon by 2024, during its presentation at NASA headquarters in Washington, U.S., October 15, 2019. (Photo by Carlos Jasso/Reuters) 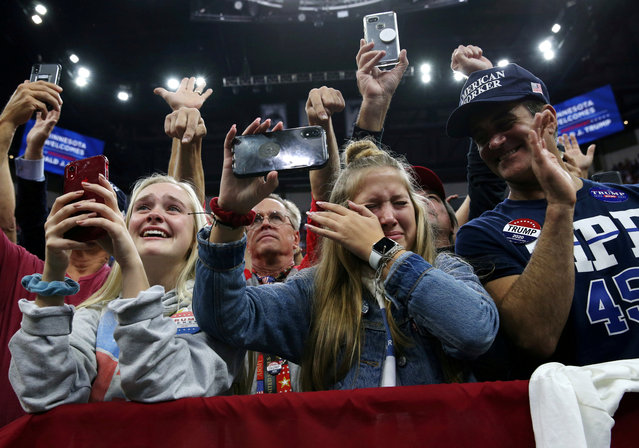 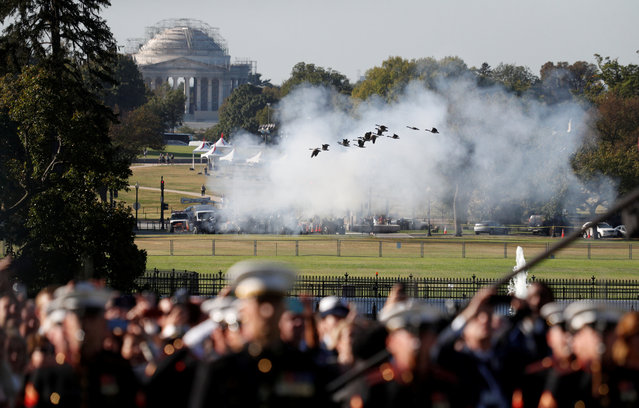 A flock of geese take flight over Washington's Ellipse in front of the Jefferson Memorial as guns are fired in a salute during an official arrival ceremony for Australia's Prime Minister Scott Morrison by U.S. President Donald Trump on the South Lawn of the White House in Washington, U.S., September 20, 2019. (Photo by Tom Brenner/Reuters) 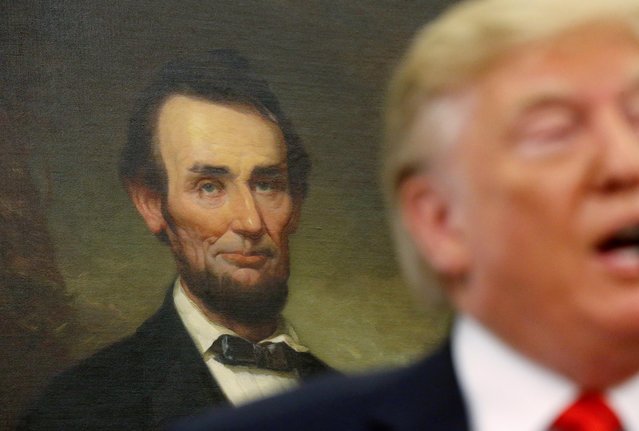 A portrait of late U.S. President Abraham Lincoln hangs in the background as U.S. President Donald Trump speaks during a ceremonial swearing-in for Labor Secretary Eugene Scalia at the White House in Washington, U.S., September 30, 2019. (Photo by Leah Millis/Reuters) 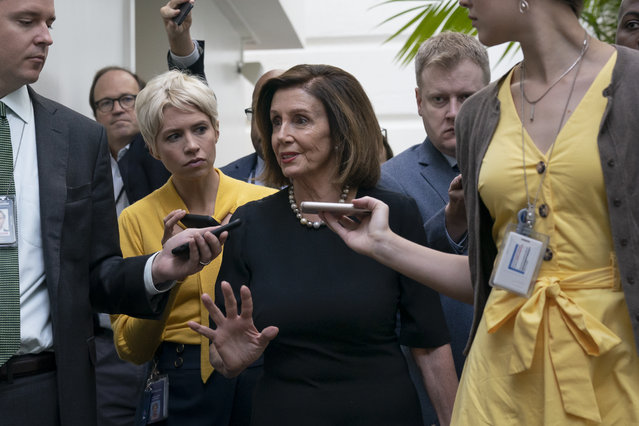 Speaker of the House Nancy Pelosi, D-Calif., is surrounded by reporters as she arrives to meet with her caucus the morning after declaring she will launch a formal impeachment inquiry against President Donald Trump, at the Capitol in Washington, Wednesday, September 25, 2019. (Photo by J. Scott Applewhite/AP Photo) 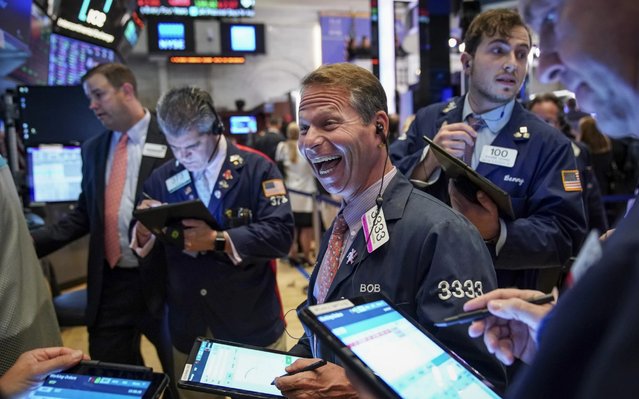 Traders and financial professionals work on the floor of the New York Stock Exchange (NYSE) at the closing bell on October 2, 2019 in New York City. The Dow Jones Industrial Average has dropped over 800 points in the first two days of trading in October. The drop comes after reports showed slowing in September for both manufacturing and hiring. (Photo by Drew Angerer/Getty Images) 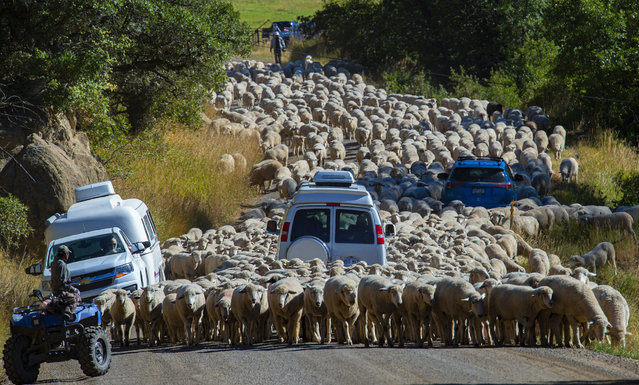 Sheep herders create a “lamb jam” on a warm fall day as they move their flock down Gunnison County Road 12 below Kebler Pass toward Paonia, Colo., Wednesday, September 25, 2019. (Photo by Christian Murdock/The Gazette via AP Photo) 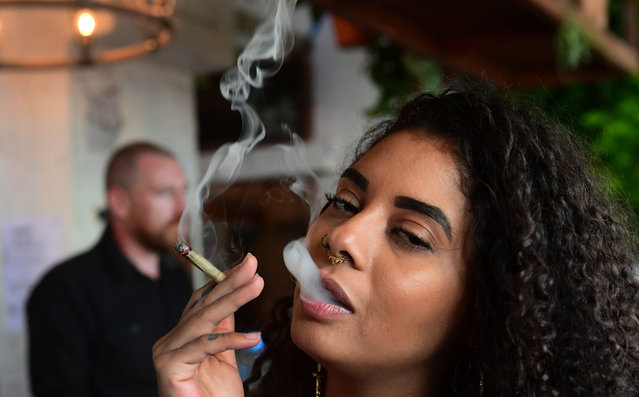 Kush Doleo smokes a joint at the Lowell Cafe in West Hollywood, California, on September 30, 2019, a day before its official opening. America's first cannabis restaurant has opened in West Hollywood, offering diners an array of weed products and hoping to rival Amsterdam's famed coffee shops. Called Lowell Farms: A Cannabis Cafe, the much-hyped 240-seat establishment is open to people 21 and over, who can order from a cannabis menu just like they would a wine bottle. (Photo by Frederic J. Brown/AFP Photo) 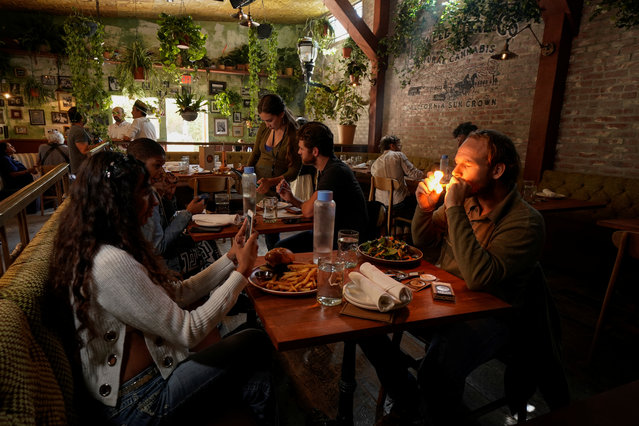 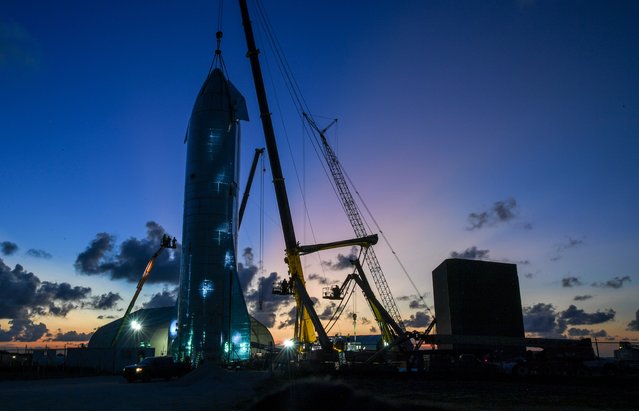 Workers put the finishing touches on a prototype of a spaceship called “Starship” before SpaceX CEO Elon Musk arrives to update the progress on the project in Brownsville, Tex. on September 27, 2019. (Photo by Jonathan Newton/The Washington Post) 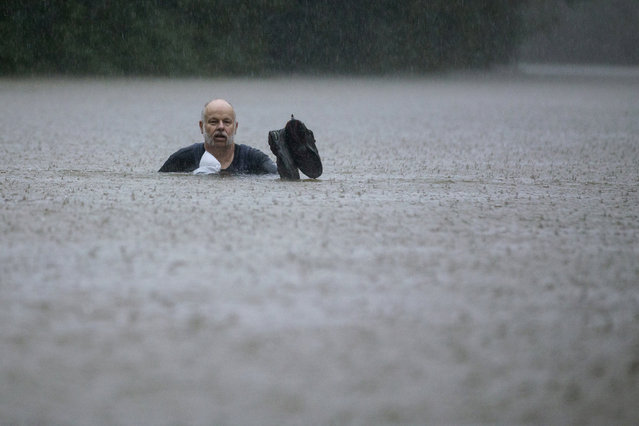 A man wades out through floodwaters caused by heavy rain spawned by Tropical Depression Imelda inundated the area on Thursday, September 19, 2019, in Patton Village, Texas. (Photo by Brett Coomer/Houston Chronicle via AP Photo) 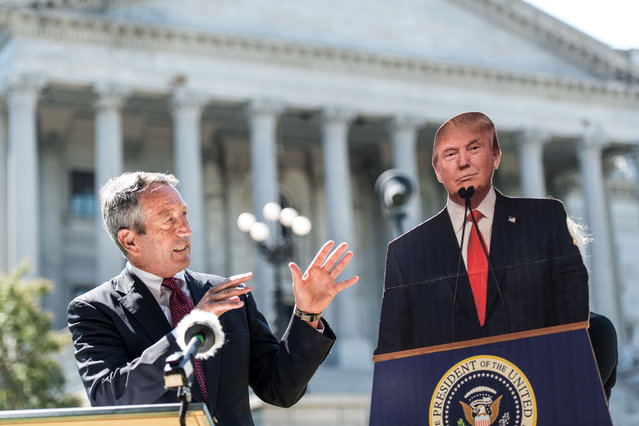 Former South Carolina Gov. Mark Sanford speaks to the media with a cardboard cutout of President Donald Trump during a campaign stop at the state house on September 16, 2019 in Columbia, South Carolina. Sanford is running against the Republican president in the primary election. (Photo by Sean Rayford/Getty Images) 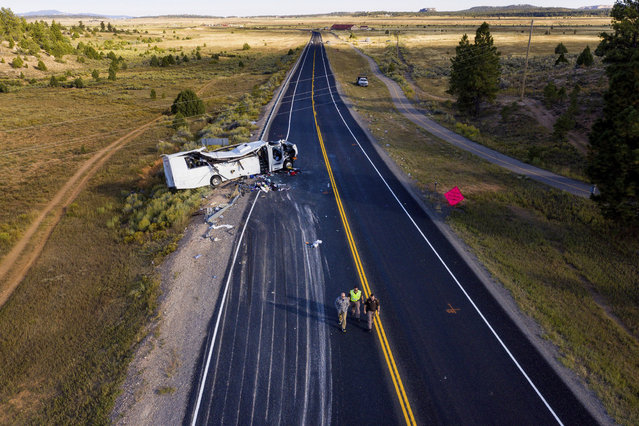 The remains of a bus that crashed while carrying Chinese-speaking tourists lie along State Route 12 near Bryce Canyon National Park, Friday, September 20, 2019, in Utah, as authorities continue to investigate. (Photo by Spenser Heaps/The Deseret News via AP Photo) 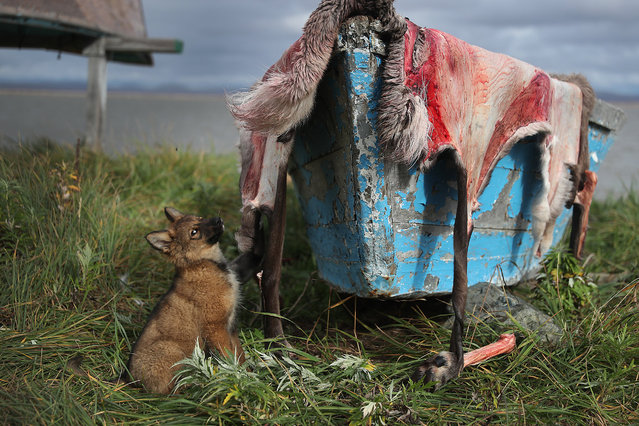 A pelt from a caribou is left out to dry on September 11, 2019 in Kivalina, Alaska. The hunters in the village have seen the migration patterns of fish, caribou, seal and whale that they need for the long winter months change due to the warming weather. Kivalina is situated at the very end of an eight-mile barrier reef located between a lagoon and the Chukchi Sea. The village is 83 miles above the Arctic circle. Kivalina and a few other native coastal Alaskan villages face the warming of the Arctic, which has resulted in the loss of sea ice that buffers the islands shorelines from storm surges and coastal erosion. The residents of Kivalina are hoping to stay on their ancestral lands where they can preserve their culture, rather than dispersing due to their island being swallowed by the rising waters of the ocean. City Administrator Colleen Swan says that the way of life in the village will change with the changing climate and they will adapt. In days gone by, they could migrate with the changes. But now, she says, with the magnitude of problem climate change brings, they must hope that the rest of the world reverses the trend, which she sees as being man-made, and save their way of life. (Photo by Joe Raedle/Getty Images) 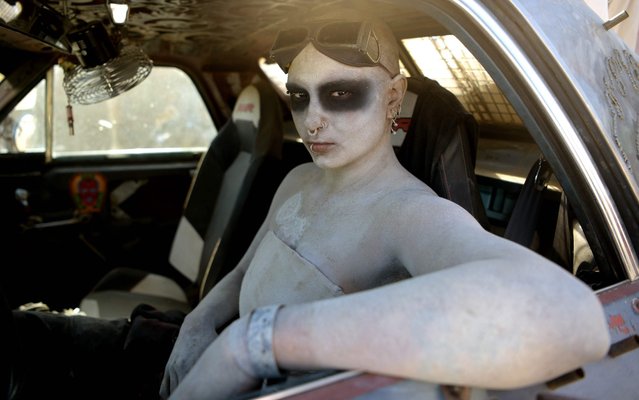 A woman poses for pictures in her car during Wasteland Weekend festival at the Mojave desert in Edwards, California on September 28, 2019. In 2019 the world's largest post-apocalyptic festival celebrates its 10th anniversary with around 4,000 attendees. The organizers require all festival goers to be in costume, with the idea of creating a full-inmersion effect, making attendees feel like they’re inside a Mad Max-style movie for 5 days. Activities include any number of themed distractions from the real world: live bands, DJs, car cruises, costume contests, a film festival, a post-apocalyptic swimsuit competition, Thunderdome battles etc. (Photo by Agustin Paullier/AFP Photo)
Edit Del
22 Oct 2019 00:03:00, post received 0 comments
Publication archive:
←   →
Popular tags:
All tags
Last searches: