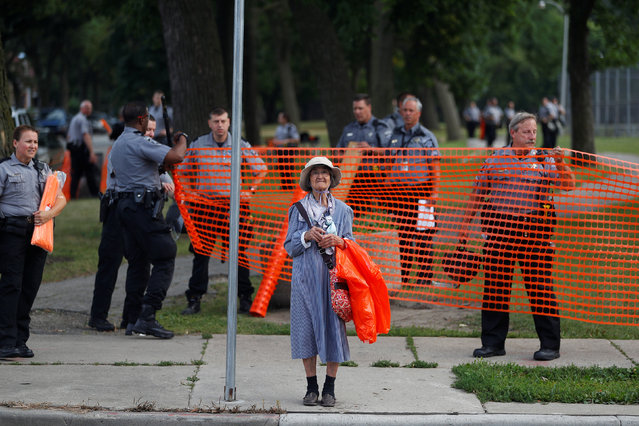 An elderly woman waits for the bus as members of the Milwaukee County Sheriff's department erect a fence around Sherman Park after disturbances following the police shooting of a man in Milwaukee, Wisconsin, U.S. August 15, 2016. (Photo by Aaron P. Bernstein/Reuters) 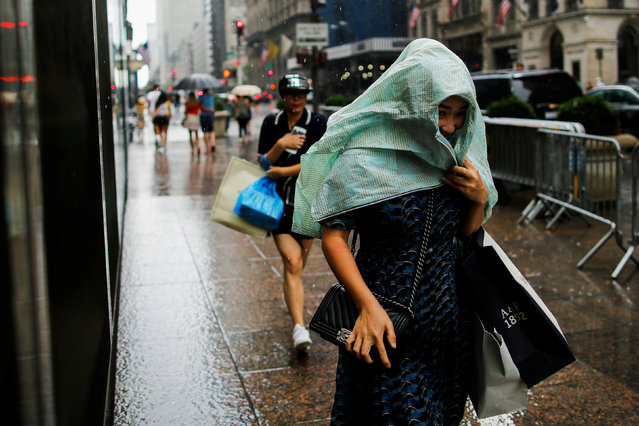 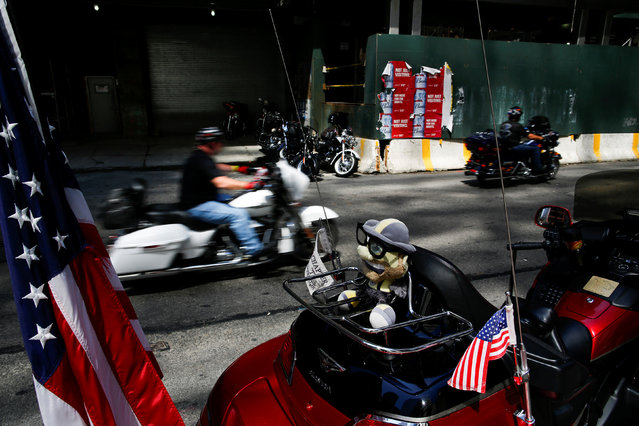 Bikers take part in the America's 911 Ride “The Final Ride”, in commemoration of the 15th anniversary of the 9-11 attacks in Lower Manhattan, New York, U.S., August 21, 2016. (Photo by Eduardo Munoz/Reuters) 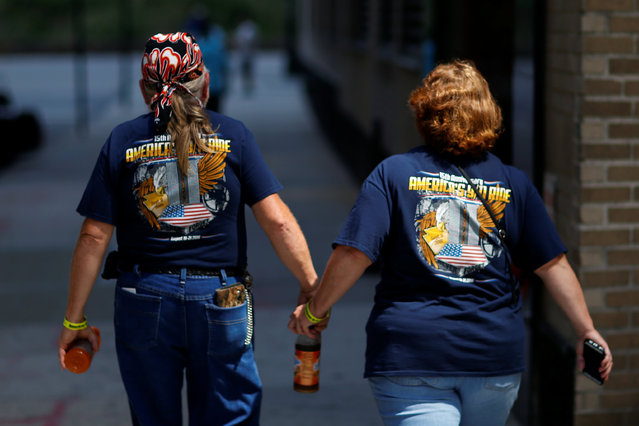 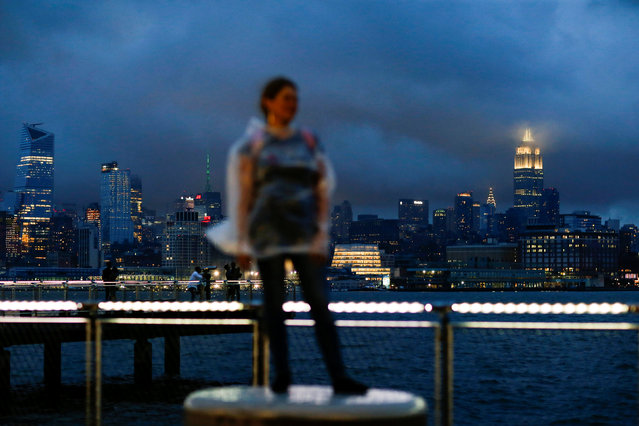 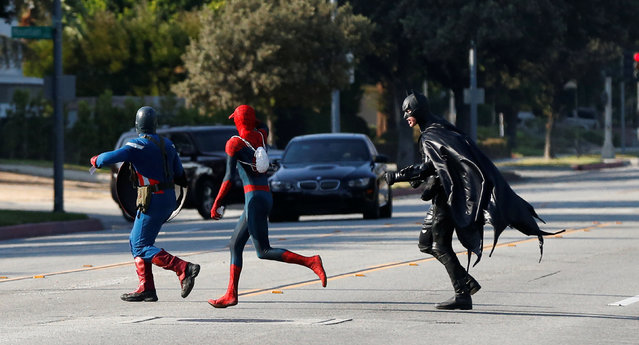 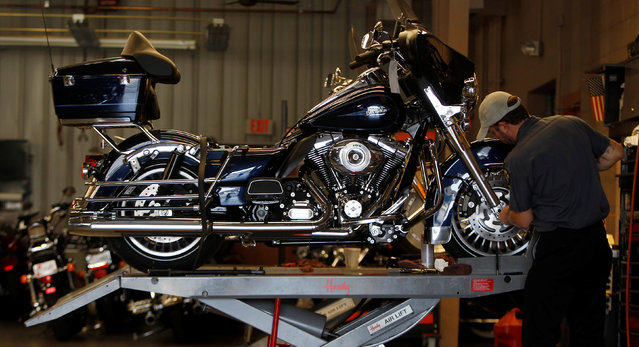 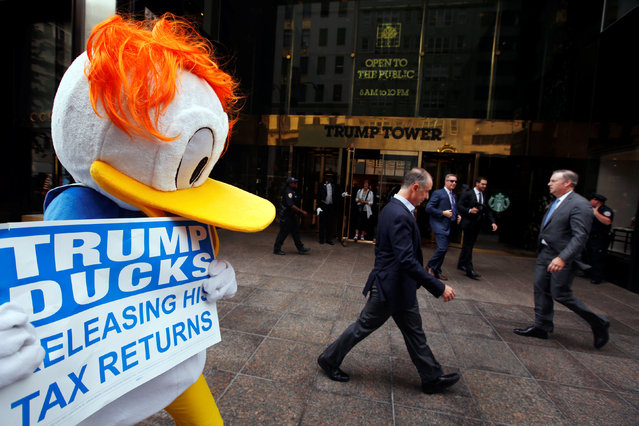 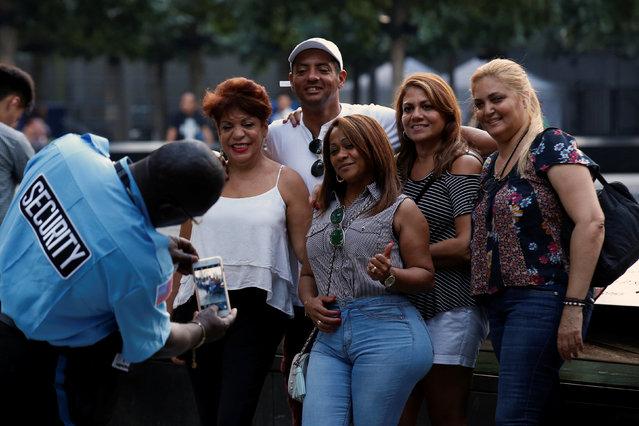 A security guard takes a photo at the memorial at the National September 11 Memorial and Museum in Lower Manhattan in New York City, U.S., September 9, 2016. (Photo by Brendan McDermid/Reuters) 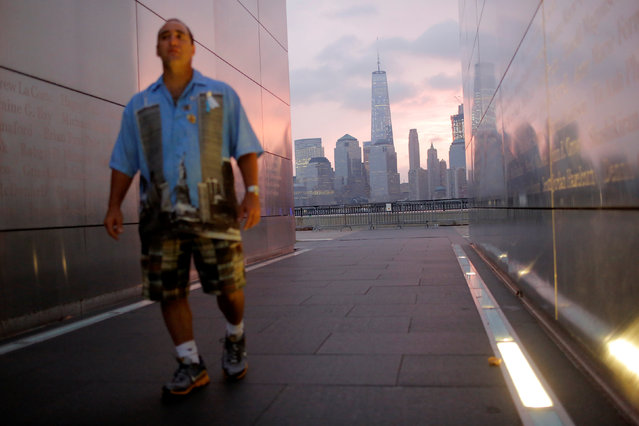 Steven Monetti Jr. walks through the Empty Sky memorial on the morning of the 15th anniversary of the 9/11 attacks in New Jersey, U.S., September 11, 2016. (Photo by Andrew Kelly/Reuters) 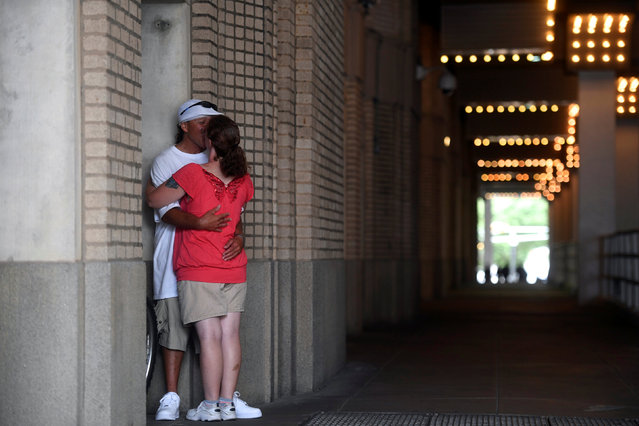 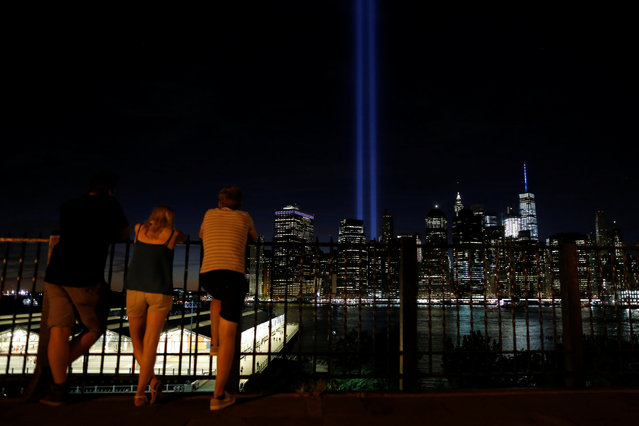 People look on as the Tribute in Light shines on the 15th anniversary of the 9/11 attacks in Manhattan, New York, U.S., September 11, 2016. (Photo by Andrew Kelly/Reuters) 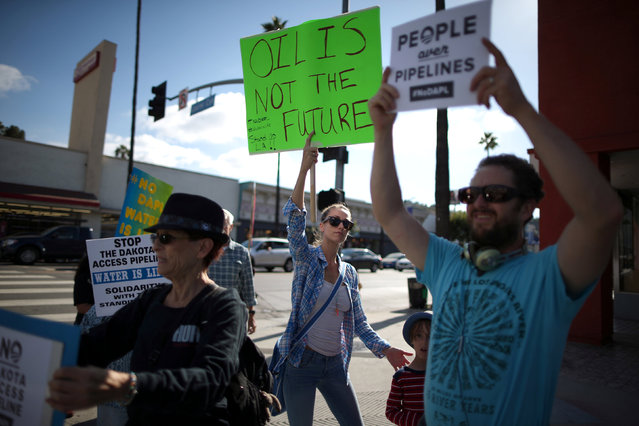 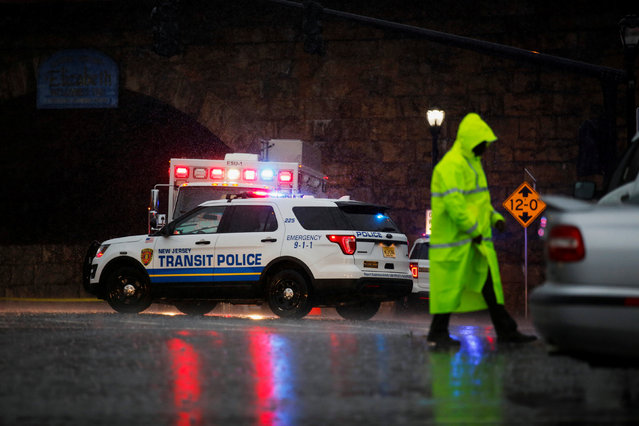 A police officer walks near an area where an explosive device left at a train station was detonated by the authorities in Elizabeth, New Jersey, U.S., September 19, 2016. (Photo by Eduardo Munoz/Reuters) 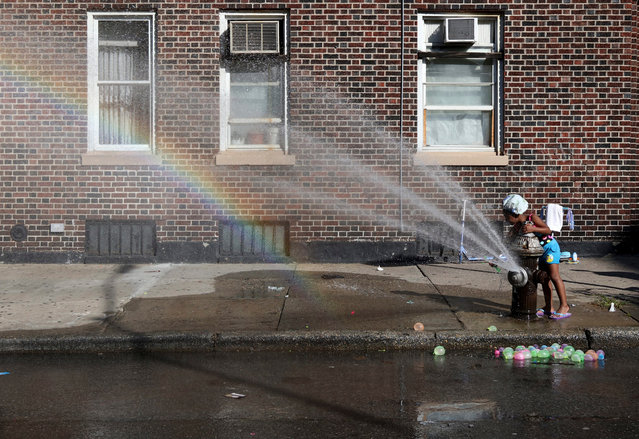 Jenally Canario, five, plays in an open fire hydrant in the Williamsburg section of Brooklyn, New York, USA, 15 August 2016. Temperatures have been in the 90's Fahrenheit (32-degree Celsius) for five consecutive days. (Photo by Andrew Gombert/EPA) 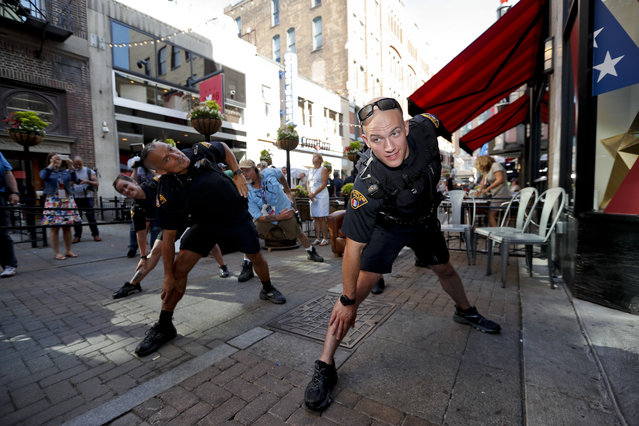 Police officers stretch and warm up before going on patrol, Wednesday, July 20, 2016, in Cleveland, during the third day of the Republican convention. (Photo by Alex Brandon/AP Photo) 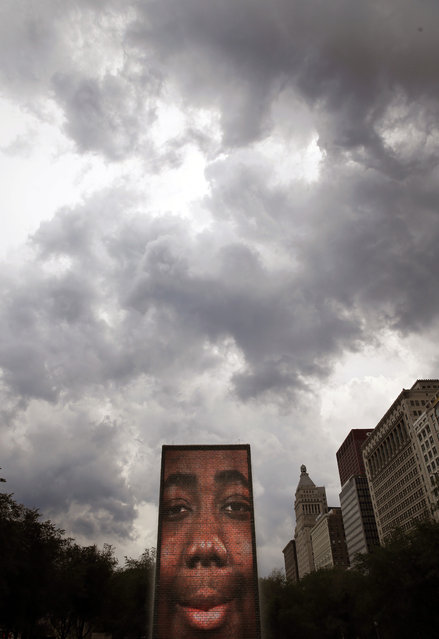 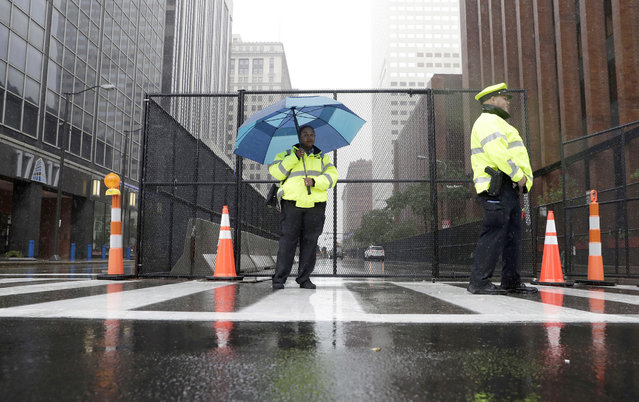 Law enforcement and traffic police stand at a closed street as preparations are made for the Republican National Convention, Saturday, July 16, 2016 in Cleveland, Ohio. (Photo by Alex Brandon/AP Photo) 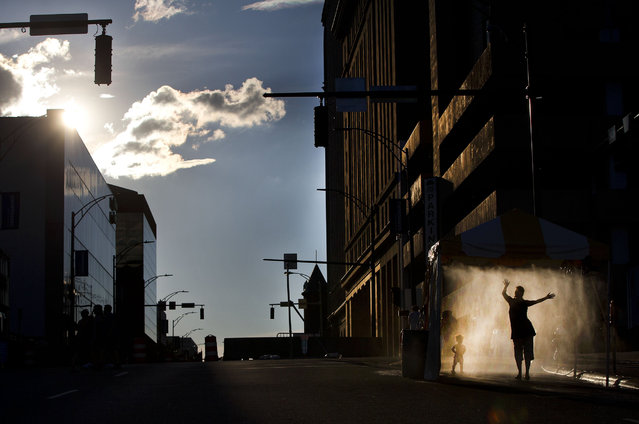 Heather Thompson, right, does one more dance through the misting station with her daughter Ayla (left) as they leave the 76th National Folk Festival, Sunday, September 11, 2016, in Greensboro, N.C. (Photo by Andrew Krech/News & Record via AP Photo) 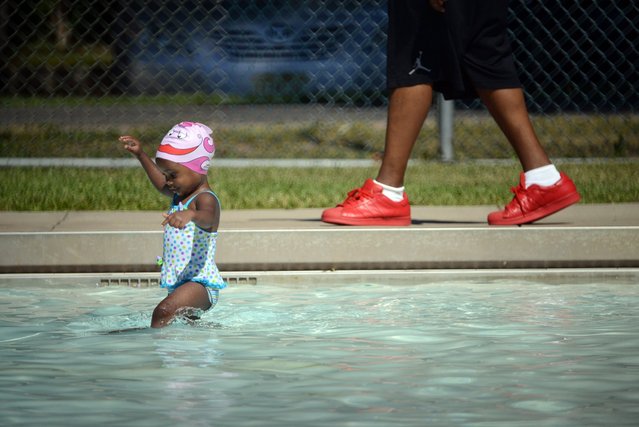 As her father walks behind her, Addison Keller, 2, enters the MacKay Park pool in Englewood, NJ for a swim lesson on July 23, 2016. (Photo by Carmine Galasso/The Record of Bergen County via AP Photo) 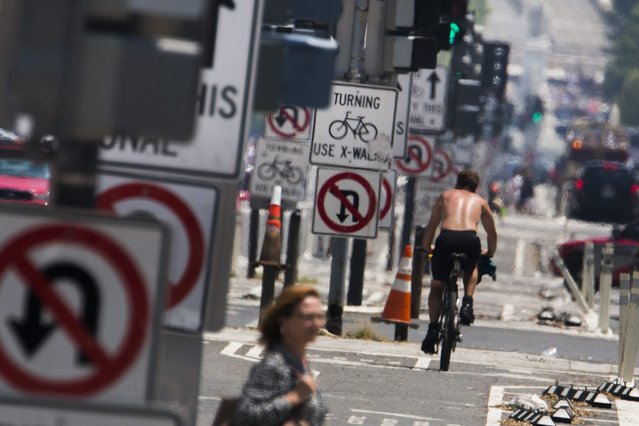 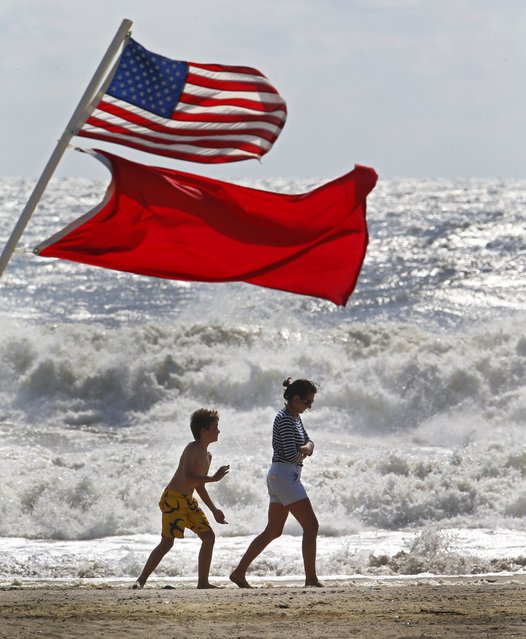 Beachgoers walk away from big waves and rough surf caused by Hermine, Sunday, September 4, 2016, in Bradley Beach,N.J. No swimming was allowed because of the passing storm. (Photo by Noah K. Murray/The Asbury Park Press via AP Photo) 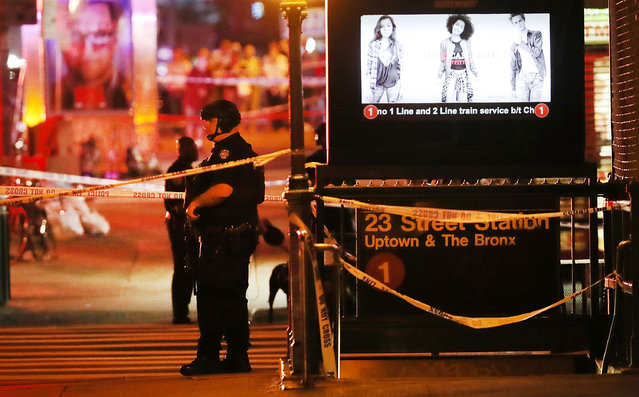 Police, firefighters and emergency workers gather at the scene of an explosion in Manhattan on September 17, 2016 in New York City. The evening explosion at 23rd street in the popular Chelsea neighborhood injured over a dozen people and is being investigated. (Photo by Spencer Platt/Getty Images) 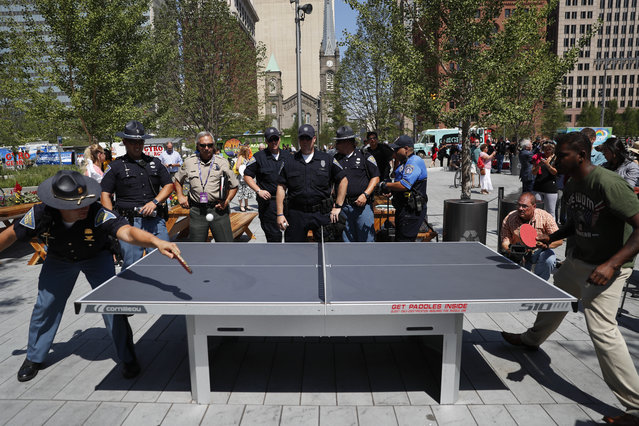 A Indiana State Police officer plays table tennis in Public Square on Thursday, July 21, 2016, in Cleveland, during the final day of the Republican convention. (Photo by John Minchillo/AP Photo) 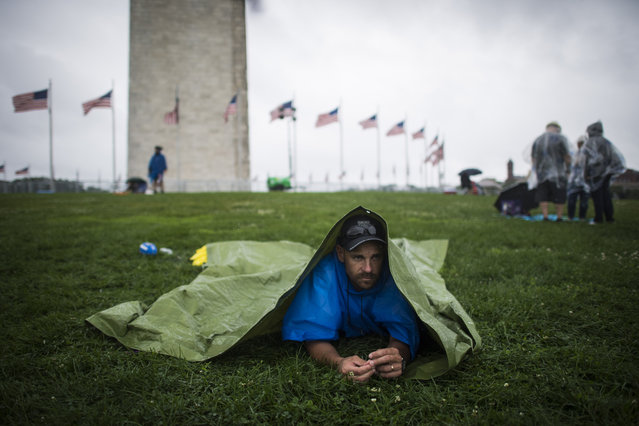 Will Hathaway, hides under a tarp near the Washington Monument as he marks his family's spot as it continues to rain before the Independence Day fireworks on the National Mall in Washington, DC on Monday July 04, 2016. (Photo by Jabin Botsford/The Washington Post) 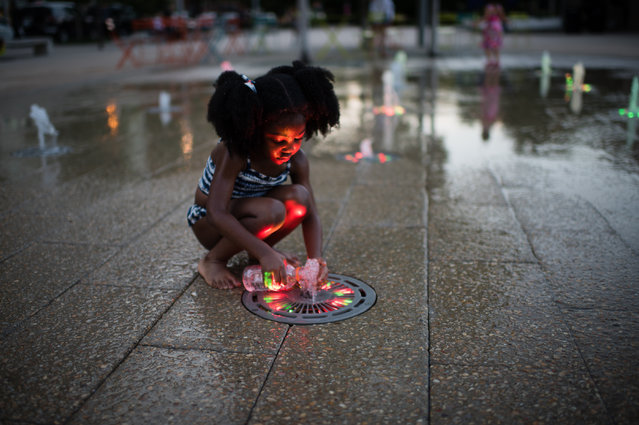 Meaghan Wallace, 3, of DC, fills a water bottle at the Canal Park sprayground on July 9, 2016. The sprayground at Canal Park is an interactive water fountain with programmable water jets embedded below the pavement that are illuminated in many colors. The park at 200 M St. SE was built on the site of the historic Washington Canal in the heart of DC's Captiol Riverfront neighborhood. It (Photo by Sarah L. Voisin/The Washington Post) 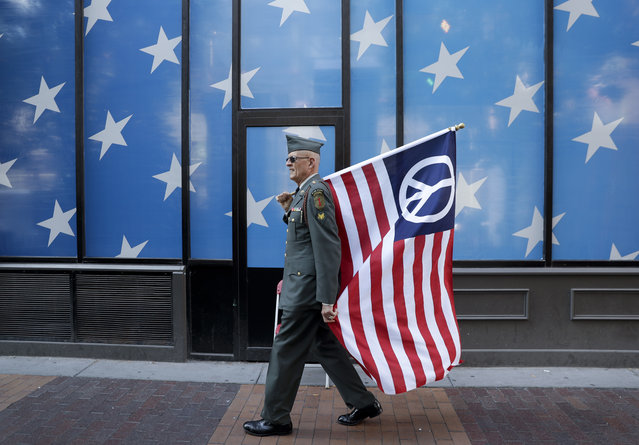 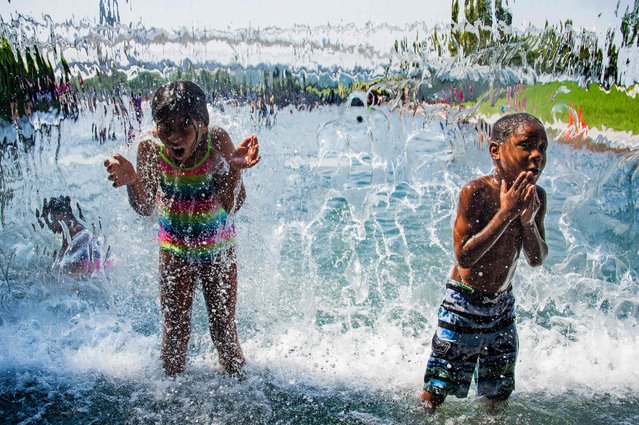 Children play in the waterfall, July 25, 2016, at The Yard Park in Washington DC, as a heat wave rolls across the area. (Photo by Jim Watson/AFP Photo) 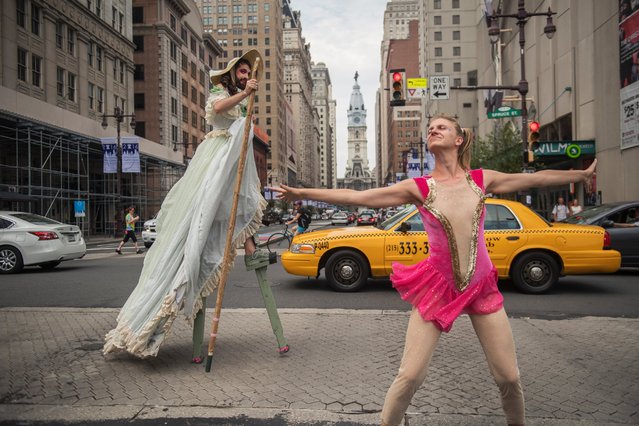 Members of the Bearded Ladies Cabaret cross Broad St., before a march by supporters of Sen. Bernie Sanders, I-Vt., in Philadelphia, on the first day of the Democratic National Convention, July 25, 2016. (Photo by Tom Williams/CQ Roll Call/AP Images) 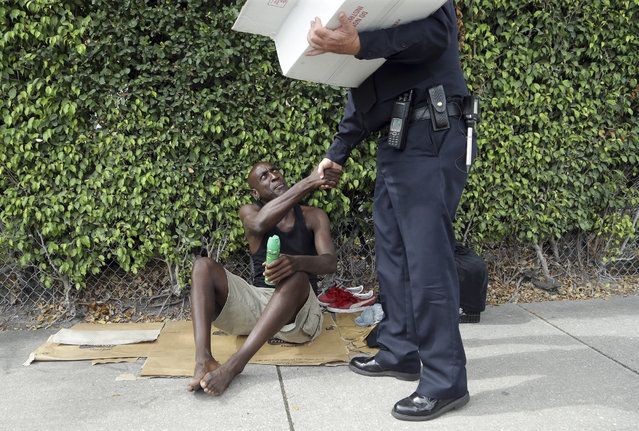 Lorenzo Ward, 45, who is homeless, shakes hands with Miami police officer James Bernat, after Bernat gave him a can of insect repellent, Tuesday, August 2, 2016 in the Wynwood neighborhood of Miami. The CDC has advised pregnant women to avoid travel to this neighborhood where mosquitoes are apparently transmitting Zika directly to humans. Bernat passed out some fifty cans of spray to the homeless. (Photo by Lynne Sladky/AP Photo)
Edit Del
23 Sep 2016 09:18:00, post received 0 comments
Publication archive:
←   →
Popular tags:
All tags
Last searches: