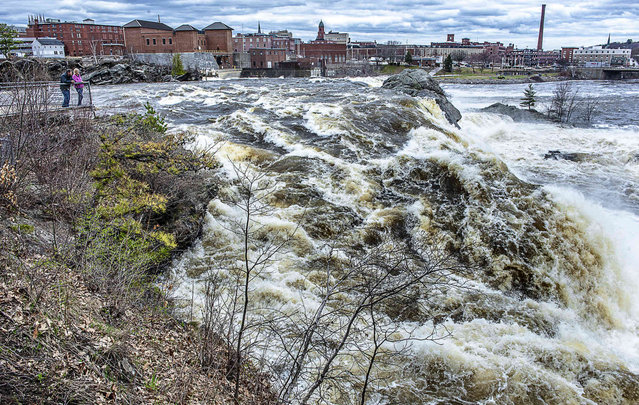 John Knapp and Monica Strobel, from Bowdoin, Me.,stand on the viewing platform at the Lewiston Falls Station Falls recreation area in Auburn and marvel at the height of the water and enjoy the roar of the Androscoggin River on Thursday afternoon, April 25, 2019. (Photo by Andree Kehn/Sun Journal via AP Photo) 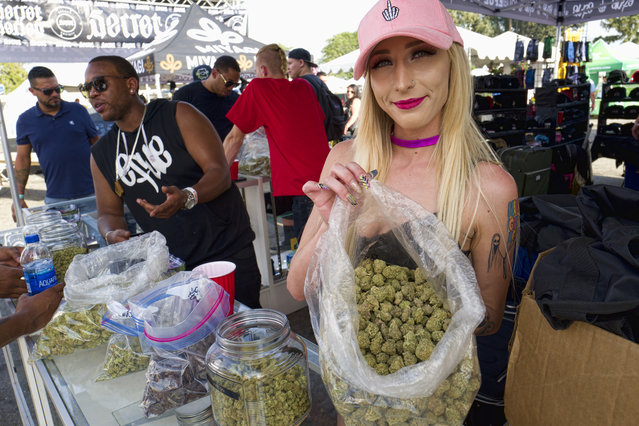 In this Saturday, April 21, 2018 file photo a bud tender offers attendees the latest products of cannabis at the High Times 420 SoCal Cannabis Cup in San Bernardino, Calif. Businesses inside and outside the multibillion-dollar cannabis industry are using April 20, or “420,” to roll out marketing and social media messaging aimed at connecting with marijuana enthusiasts. (Photo by Richard Vogel,/AP Photo/File) 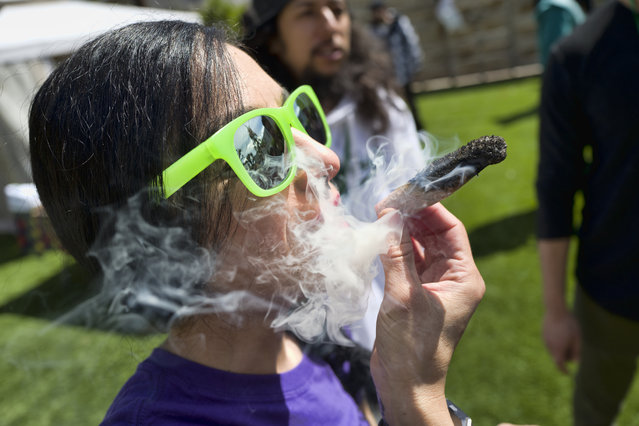 In this Friday, March 22, 2019 file photo, a participant takes a very smoky puff from a marijuana cigarette during at meet and greet at Tommy Chong's Live, Love, and Smoke Tour hosted by GreenTours in the Woodland Hills section of Los Angeles. U.S. retail sales of cannabis products jumped to $10.5 billion last year, a threefold increase from 2017, according to data from Arcview Group, a cannabis investment and market research firm. The figures do not include retail sales of hemp-derived CBD products. (Photo by Richard Vogel,/AP Photo/File) 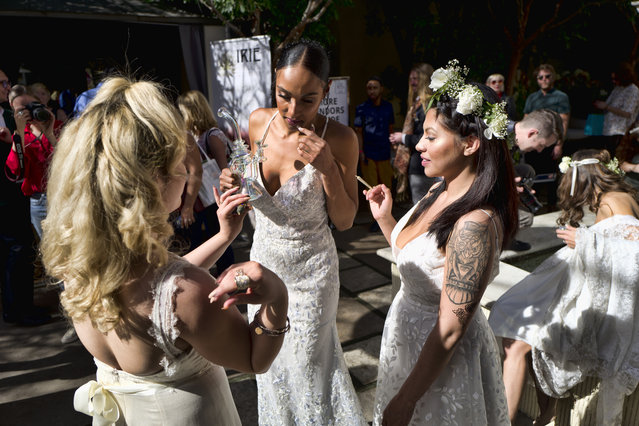 In this January 26, 2019 file photo models wearing wedding dresses get ready smoke marijuana during the Cannabis Wedding Expo in Los Angeles. U.S. retail sales of cannabis products jumped to $10.5 billion last year, a threefold increase from 2017, according to data from Arcview Group, a cannabis investment and market research firm. The figures do not include retail sales of hemp-derived CBD products. (Photo by Richard Vogel/AP Photo/File) 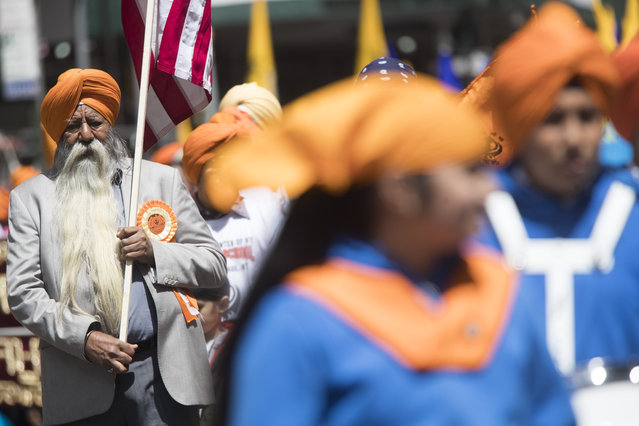 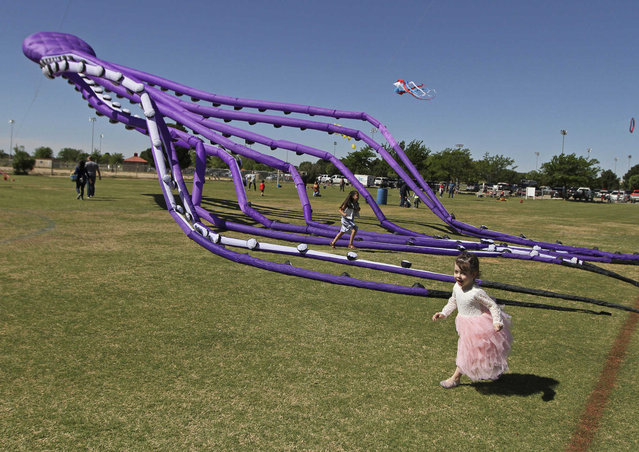 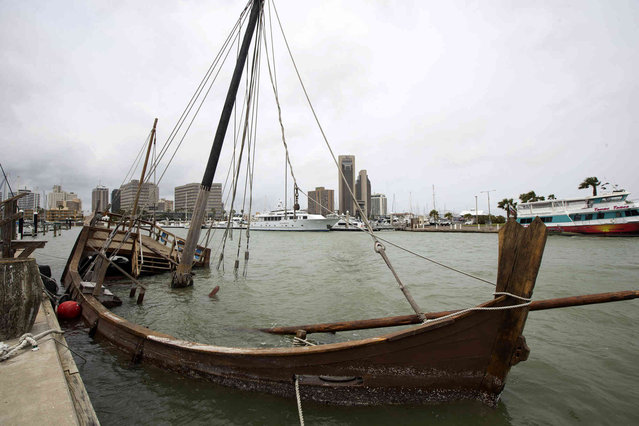 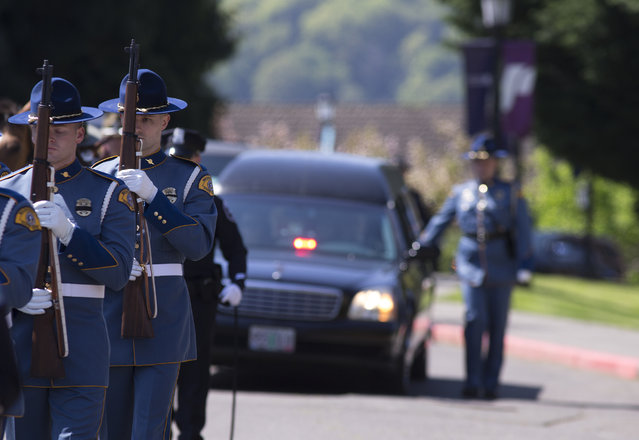 A procession honoring Cowlitz County Deputy Justin DeRosier makes its way to the Chiles Center at the University of Portland, where a memorial service is taking place for the slain deputy, Wednesday, April 24, 2019 in Portland, Ore. (Photo by Beth Nakamura/The Oregonian via AP Photo) 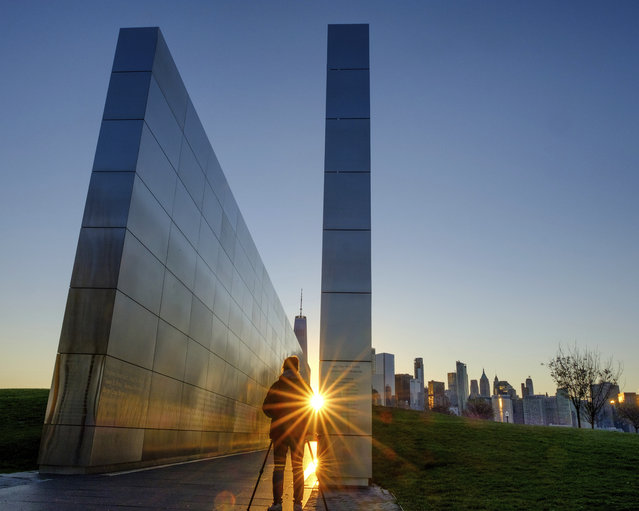 A photographer captures the light reflecting off of the Empty Sky Memorial in Jersey City, N.J., Tuesday, April 23, 2019, as the sun rises over the New York City skyline. (Photo by J. David Ake/AP Photo) 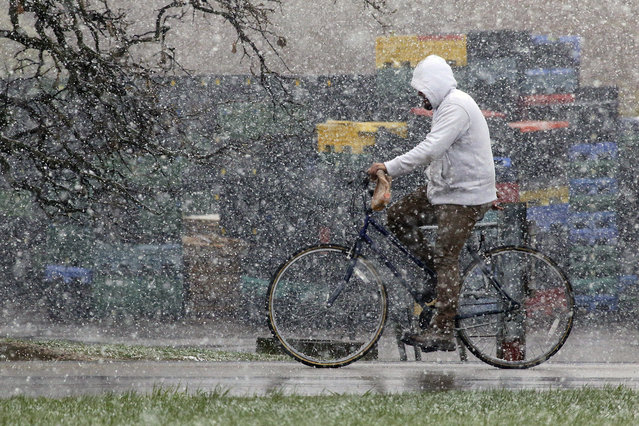 A man rides his bike through the snow along Allanson Road in Mundelein, Ill. Saturday morning, April 27, 2019. (Photo by Stacey Wescott/Chicago Tribune via AP Photo) 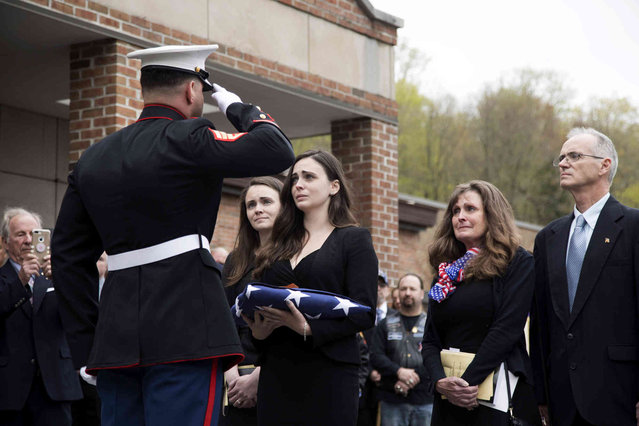 Beth Regan is presented with the flag that draped the casket of her friend Marine Private First Class Robert Graham on Friday, April 26, 2019 in Shrub Oak, NY. Graham, who died at 97 has no living family members but Regan arranged for hundreds to attend his funeral. “Receiving the flag was like receiving a part of him”, Regan said. (Photo by Allyse PulliamAP Photo) 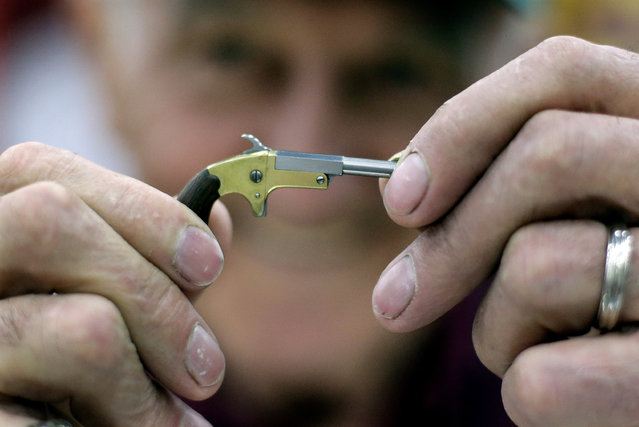 In this, May 21, 2016, file photo, Bob McGinnis, of Cross Plains, Wis., holds a miniature gun he has made at a display of the Miniature Arms Society at the National Rifle Association convention in Louisville, Ky. The convention, that started in 1871 as a group devoted to hunting, shooting sports and gun safety, has evolved into one of the most powerful forces in American politics. (Photo by Mark Humphrey/AP Photo/File) 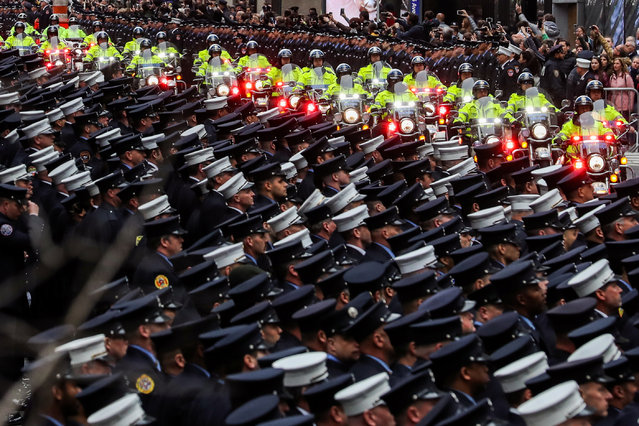 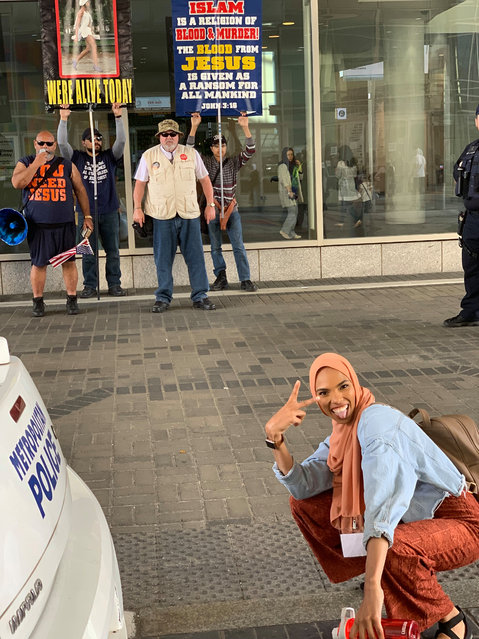 Shaymaa Ismaa’eel, a 24-year-old Muslim woman passes by a group of angry protesters at an Islamic conference in Washington, DC on April 21, 2019. In response, she crouched in front of them and flashed a peace sign. The photo, posted on Instagram, prompted an outpouring of support. (Photo by Shaymaa Ismaa'eel/Instagram) 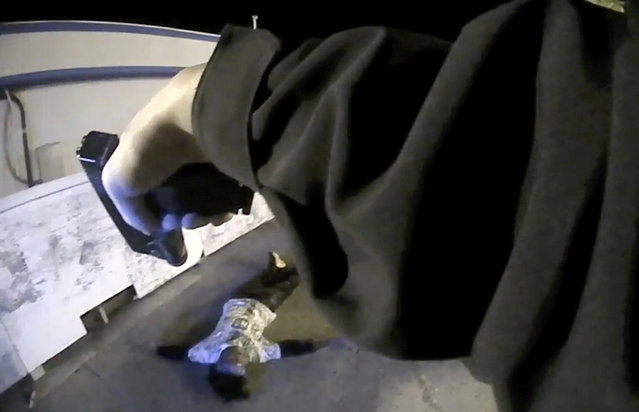 In this January 11, 2019, image made from a Lake Charles Police Department body camera, officer Jonathan D. Landrum aims a gun at Juston Landry, who he fatally shot, in Lake Charles, La. Video of the fatal encounter, obtained by The Associated Press, shows a short but harrowing pursuit in which Landry, carrying a BB gun, is shot five times while running away from Landrum. (Photo by Lake Charles Police Department via AP Photo) 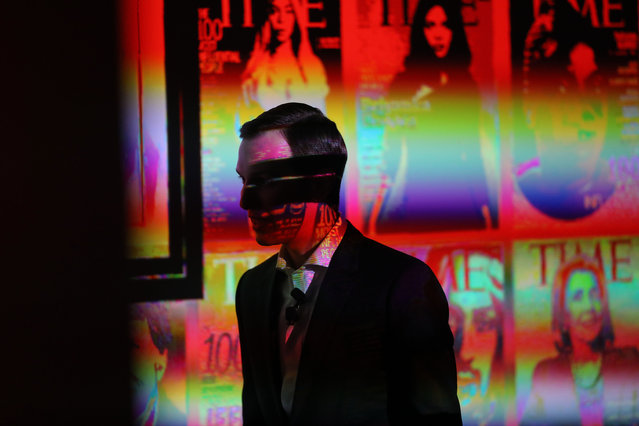 Senior advisor to the President of the United States, Jared Kushner, stands on stage at the TIME 100 Summit on April 23, 2019 in New York City. The day-long TIME 100 Summit showcases the annual TIME 100 list of the most influential people in the world. (Photo by Spencer Platt/Getty Images) 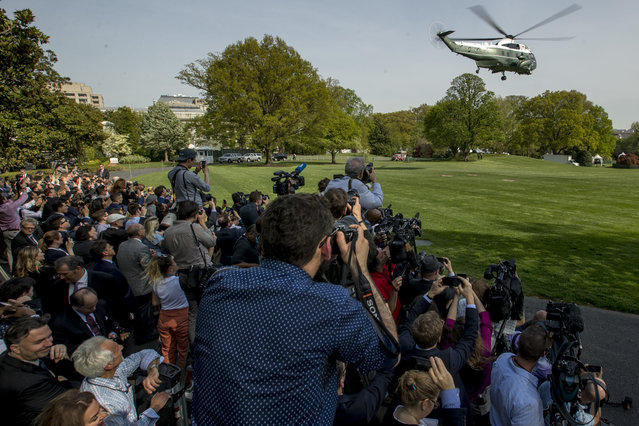 Marine One with President Donald Trump aboard, departs the South Lawn of the White House, Thursday, April 18, 2019, for a short trip to Andrews Air Force Base, Md. President Trump is traveling to his Mar-a-lago estate to spend the Easter weekend in Palm Beach, Fla. (Photo by Andrew Harnik/AP Photo) 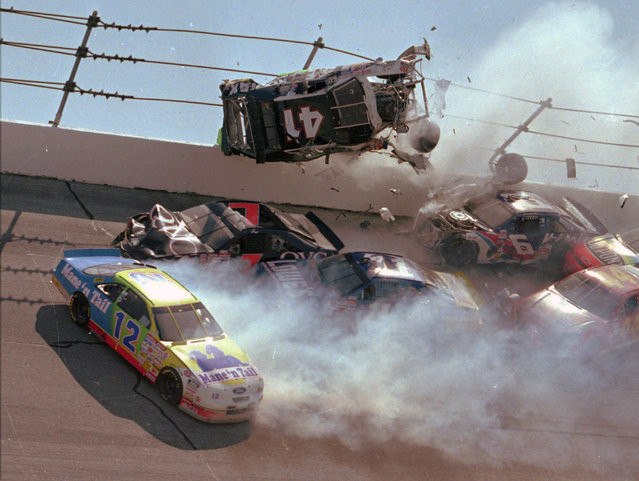 In this April 28, 1996, file photo, NASCAR driver Ricky Craven (41) flips into the catchfence in turn one of the Talladega Superspeedway during the Winston Select 500, in Talladega, Ala. Also visible are Derrike Cope (12), Geoff Bodine (7), Brett Bodine (11), Jeff Gordon (24), and Jeff Purvis (44). The ever-present air of unpredictability at Talladega Superspeedway is even more pronounced than usual this weekend, with NASCAR having replaced the horsepower-sapping restrictor plates. (Photo by Ashley Fleming/AP Photo/File) 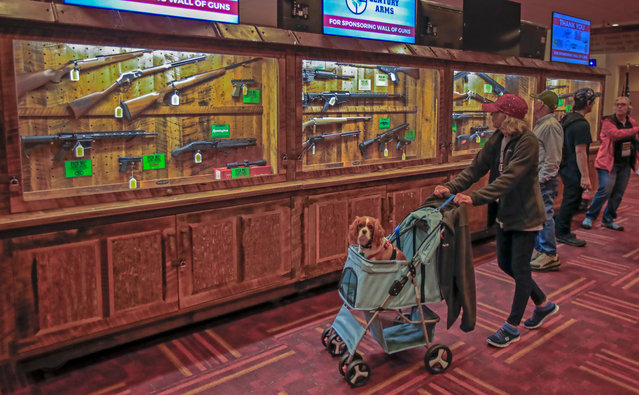 Firearms are displayed at the 2019 National Rifle Association (NRA) Annual Convention at the Indianapolis Convention Center in Indianapolis, Indiana, USA, 25 April 2019. Firearms and weapons enthusiasts will view manufacture's exhibits on all things related to firearms, protection, and hunting. (Photo by Tannen Maury/EPA/EFE) 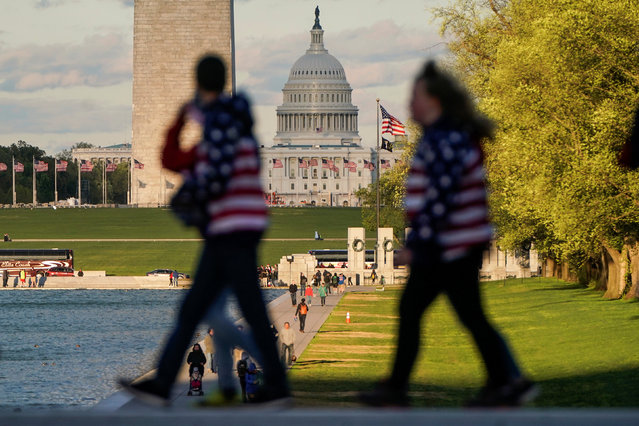 Tourists dressed in jackets with the flag of the United States on them walk past the U.S. Capitol in Washington, U.S., April 15, 2019. (Photo by Joshua Roberts/Reuters)