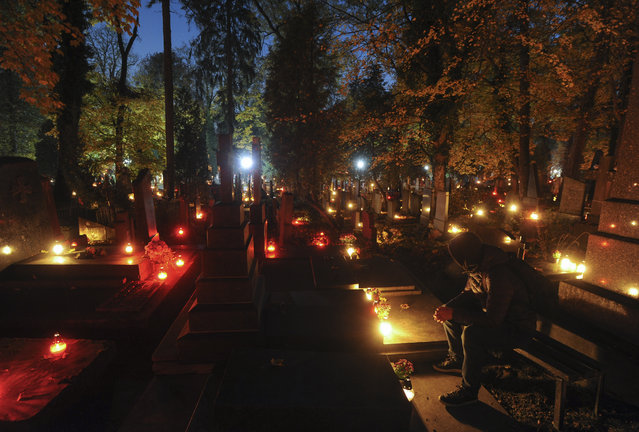 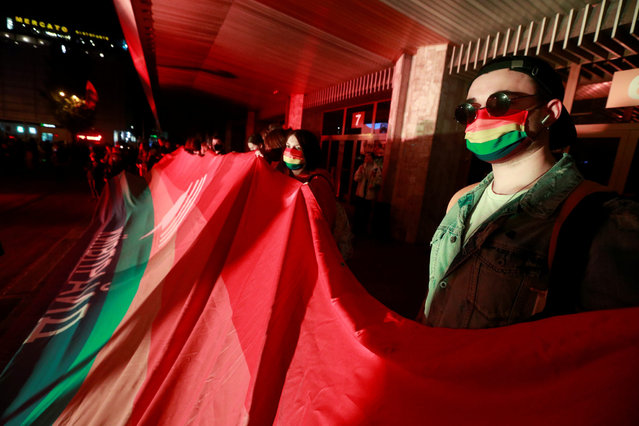 Participants wearing protective face masks hold a rainbow flag during a rally organized by the LGBT community to mark International Coming Out Day in Kyiv, Ukraine on October 11, 2020. (Photo by Valentyn Ogirenko/Reuters) 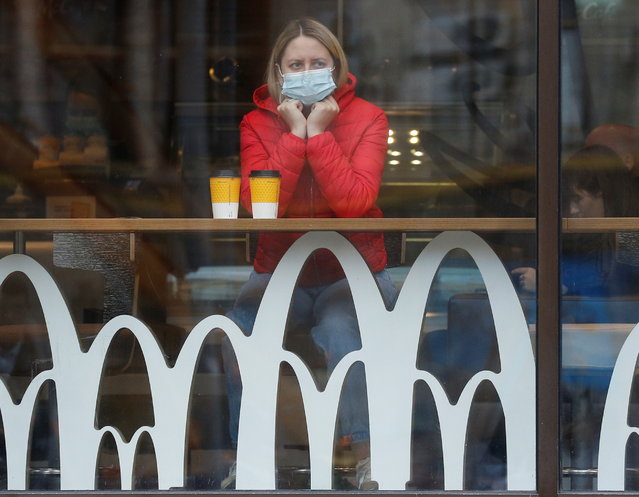 A woman wearing a protective face mask is seen inside a McDonald's restaurant amid the outbreak of the coronavirus disease (COVID-19) in Kyiv, Ukraine on October 22, 2020. (Photo by Valentyn Ogirenko/Reuters) 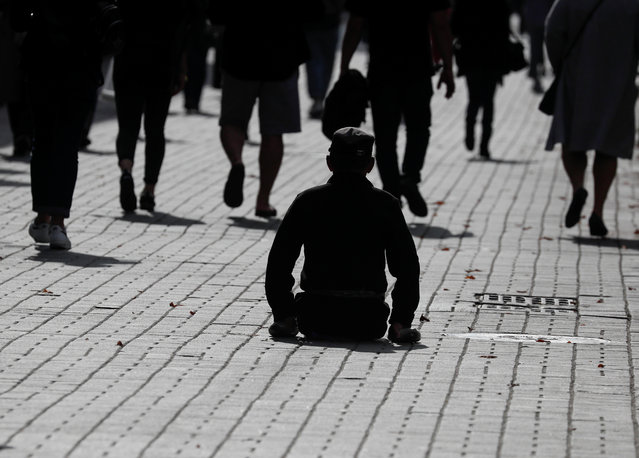 A man with physical disabilities is seen in central Kyiv, Ukraine on October 9, 2020. (Photo by Gleb Garanich/Reuters) 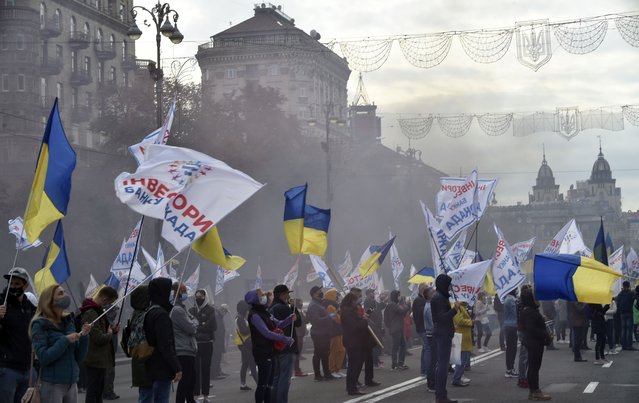 Hundreds of customers of Ukrainian commercial bank Arkada demonstrate in Kiev, on October 16, 2020, to call for the resuming of the construction of residential buildings they have invested in after the bank's activity was frozen due to financial fraud. (Photo by Sergei Supinsky/AFP Photo) 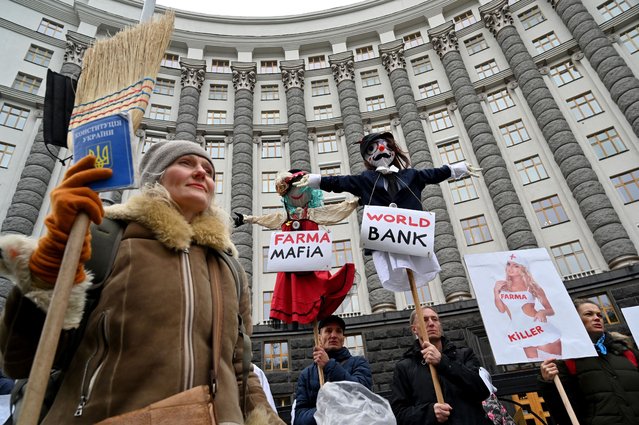 Activists protest against new anti-coronavirus restrictions, which they said will lead to the economy fall and catastrophic rise of unemployment, in front of the Ukrainian Cabinet of Ministers in Kiev on October 21, 2020. (Photo by Sergei Supinsky/AFP Photo) 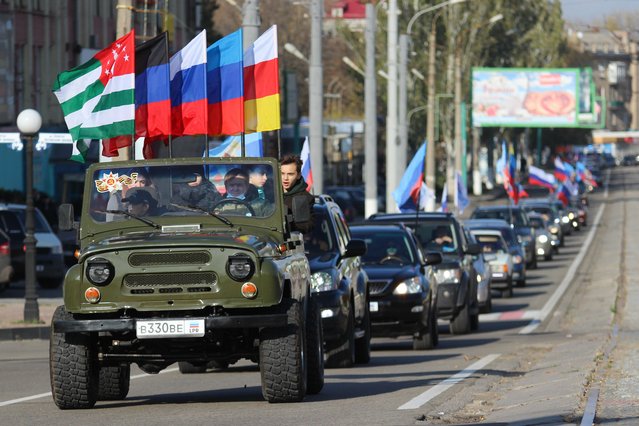 Vehicles take part in a motor rally marking Russia's Unity Day in a street in Lugansk, Ukraine on November 4, 2020. (Photo by Alexander Reka/TASS) 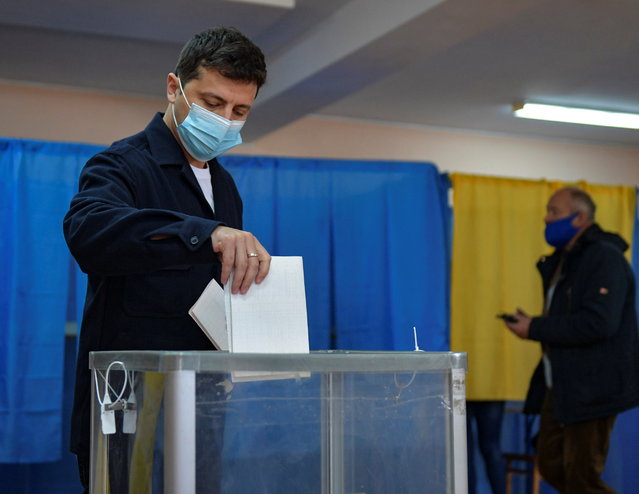 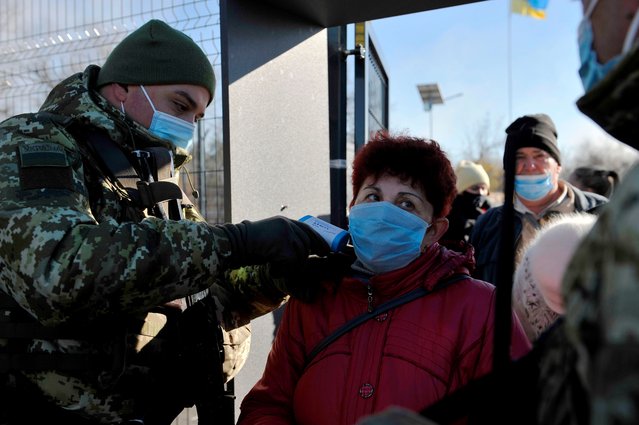 A Ukrainian border guard checks the temperature of a woman crossing the border at the checkpoint in the town of Schastya in Lugansk region on November 10, 2020. Ukraine opened on November 10, 2020, two new crossing points in the war-torn east but its attempt to facilitate the movement of civilians was hampered by separatists who denied passage to people. After a separatist uprising broke out in eastern Ukraine in 2014 and pro-Russian separatists carved out the Donetsk People's Republic and Lugansk People's Republic, travelling from and to Kiev-controlled territory has become a complicated affair. (Photo by Evgeniya Maksymova/AFP Photo) 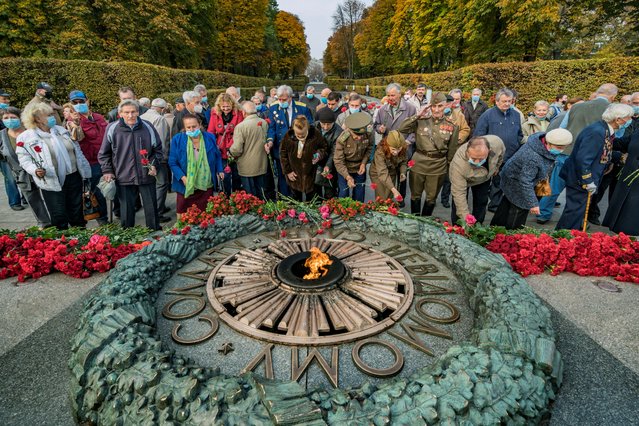 Veterans and people lay flowers in the Tomb of the Unknown Soldier in Kiev, Ukraine, on October 28, 2020 to celebrate the 76th anniversary of liberation from Nazi invaders in the Second World War. (Photo by Celestino Arce/NurPhoto via Getty Images) 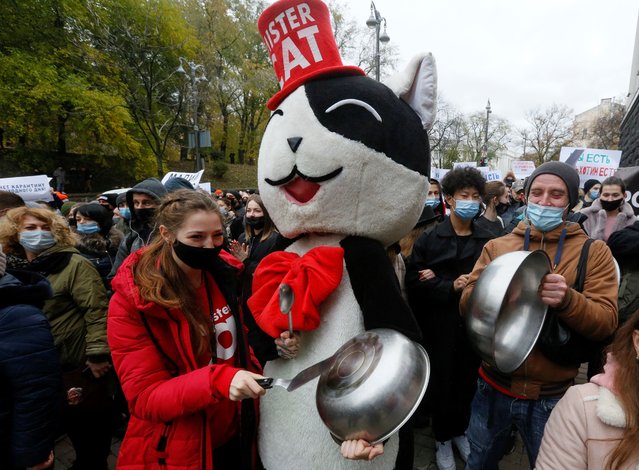 Restaurateurs bang pots and pans as they shout slogans outside the Ukrainian Cabinet in Kiev on November 11, 2020, during a protest against plans by the government to close restaurants including takeaways services on the weekends, as a measure to fight against the Covid-19 pandemic, dubbed “weekend quarantine”. (Photo by Efrem Lukatsky/AP Photo) 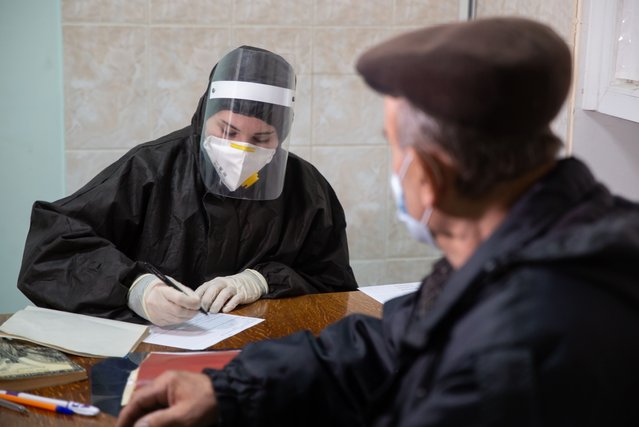 A medical worker registers a man at the Lugansk City Hospital No 1 which treats COVID-19 patients in Lugansk, Ukraine on October 29, 2020. (Photo by Alexander Russky/TASS) 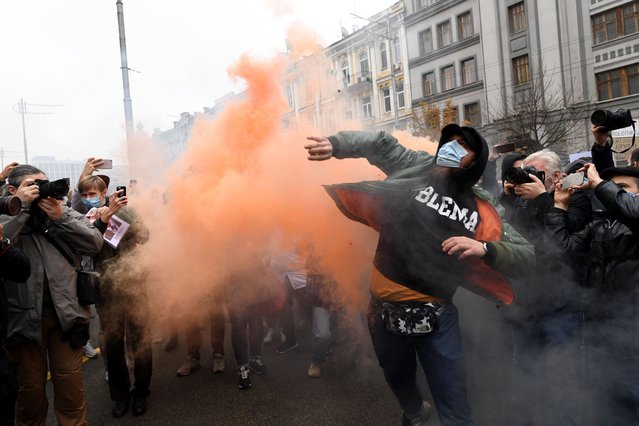 A demonstrator throws a smoke bomb during a protest action of representatives of different Ukrainian political parties and movements outside the constitutional court building in Kiev on October 30, 2020. Activists protested against the ruling of Ukraine's constitutional court that blocked a number of anti-corruption laws including on free public access to officials' declarations, a significant rollback of Ukraine's anti-corruption reforms. (Photo by Sergei Supinsky and Thomas Coex/AFP Photo) 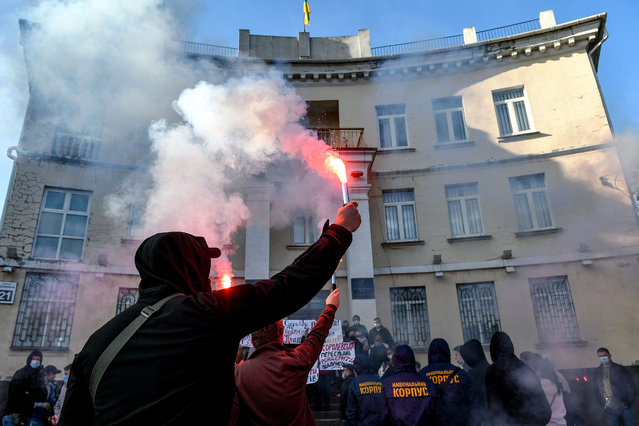 Workers of “Tavria Research Farm” SE and representatives of the National Corps hold hand flares during the protest action to demand closure of the case on bankruptcy of the agricultural enterprise outside the Commercial Court building, Zporizhzhia, southeastern Ukraine on October 9, 2020. (Photo by Ukrinform/Rex Features/Shutterstock) 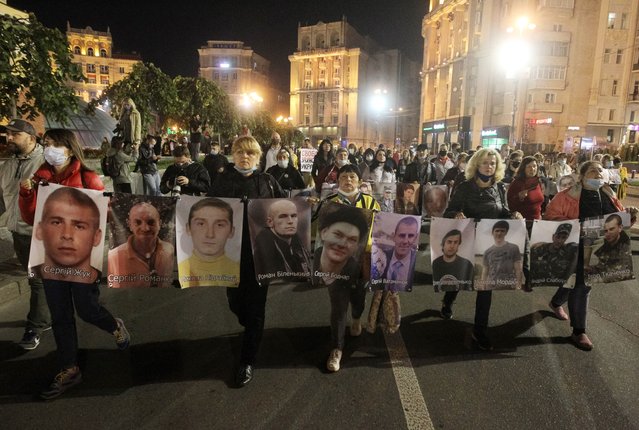 Relatives and friends carry portraits of Ukrainian prisoners, held in eastern Ukraine regions controlled by pro-Russian separatists, during all-Ukrainian action &quot;Remind about everyone&quot; in support of prisoners and relatives of the missing in downtown of Kyiv, Ukraine on 10 October 2020. Hundreds of people, relatives of detainees and missing persons, former prisoners, and supporters held their march rally demand the adoption of a law on captive prisoners and a law on war crimes. (Photo by NurPhoto via Getty Images/Stringer) 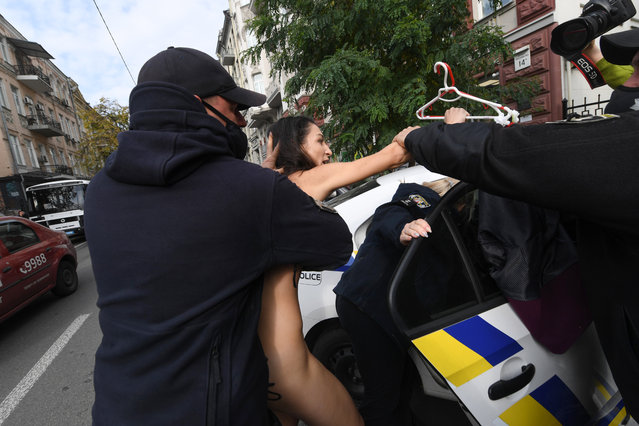 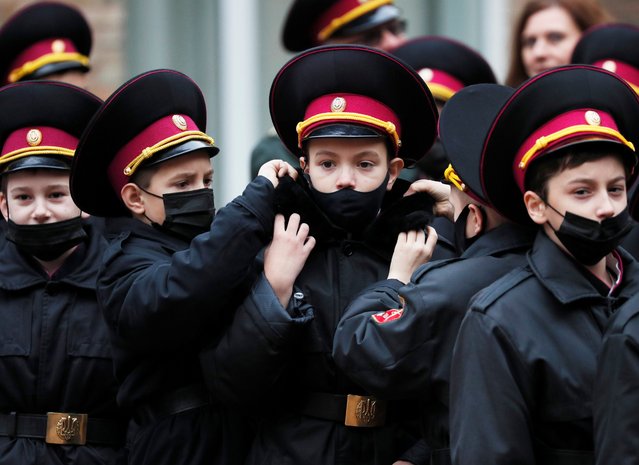 Young military adjust each others uniforms for a ceremony of receiving their shoulder marks in Kyiv, Ukraine on November 6, 2020. (Photo by Gleb Garanich/Reuters) 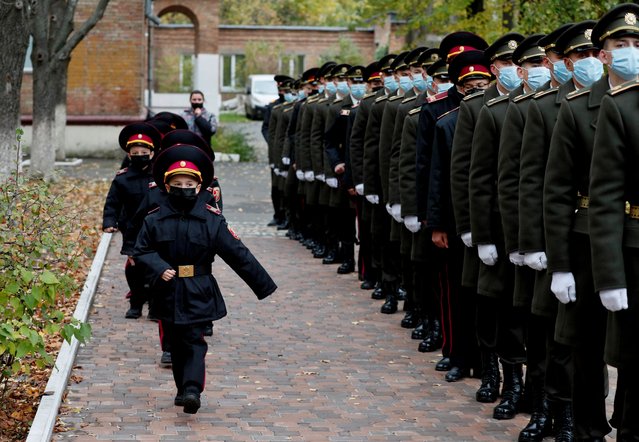 Young military march for a ceremony of receiving their shoulder marks in Kyiv, Ukraine on November 6, 2020. (Photo by Gleb Garanich/Reuters) 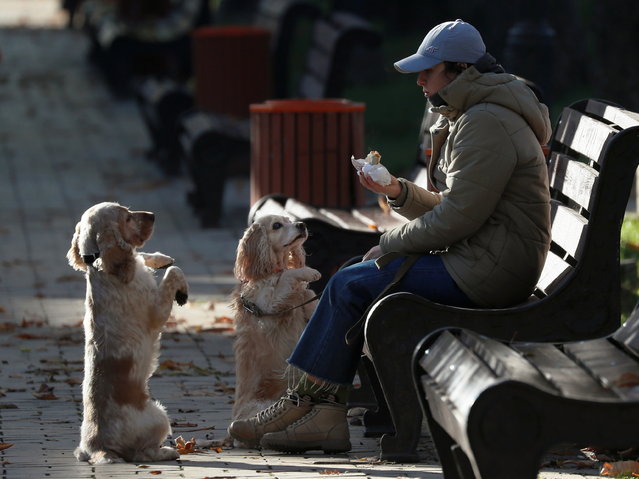