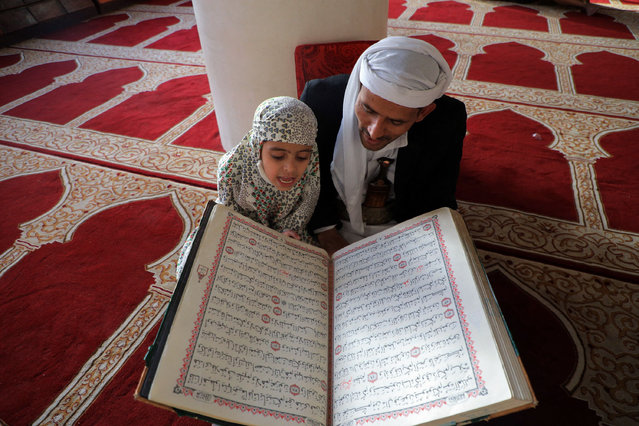 A Muslim man listen as a child reads the Koran, Islam's holy book, at the Grand Mosque of Yemen's capital Sanaa on the first day of the holy month of Ramadan, on April 2, 2022. The Iran-backed Huthi rebels and Saudi-led coalition have both agreed to observe the two-month truce, which took effect at 1600 GMT on April 2, the first day of Ramadan, the Muslim holy fasting month. (Photo by Mohammed Huwais/AFP Photo) 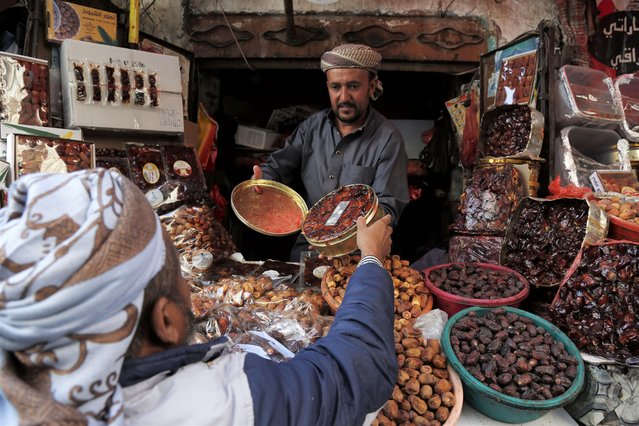 A man sells dates during Ramadan at a market in Sanaa, capital of Yemen, on April 9, 2022. (Photo by Xinhua News Agency/Rex Features/Shutterstock) 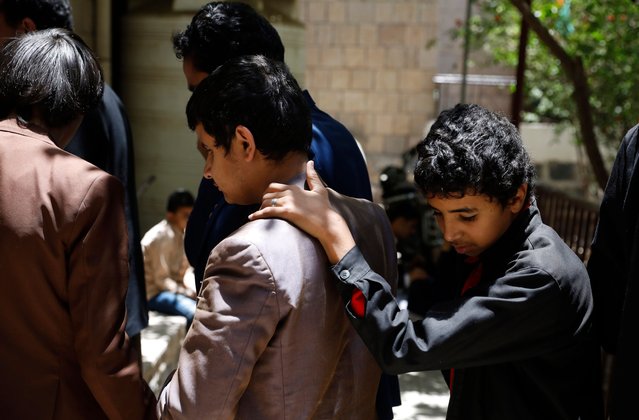 Blind Yemenis gather to get food aid provided by Mona Relief Yemen for blind people amid a heightened food insecurity, in Sana'a, Yemen, 21 April 2022. The World Food Programme (WFP) has warned of a worsening humanitarian crisis in Yemen with 17.4 million people currently in need of food assistance, estimating that the number of people unable to meet their minimum nutrition needs will go up to 19 million out of Yemen's 30-million population by December 2022. War-ravaged Yemen is experiencing a severe food insecurity because of more than seven years of war between the Houthis and the Saudi-backed government. (Photo by Yahya Arhab/EPA/EFE) 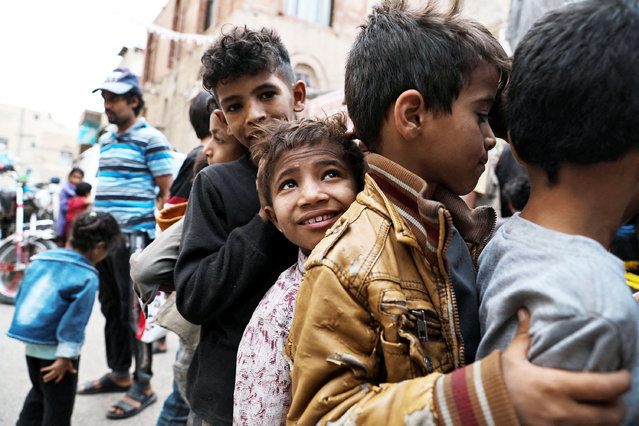 Boys stand in line as they wait to receive meals from a charity kitchen during the holy month of Ramadan in Sanaa, Yemen on April 18, 2022. (Photo by Khaled Abdullah/Reuters) 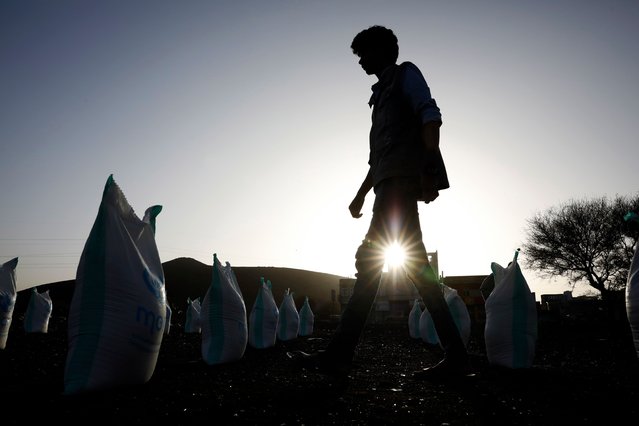 An aid worker prepares emergency food aid provided by Mona relief agency for displaced Yemenis amid a heightened food insecurity at a camp for Internally Displaced Persons (IDPs) on the outskirts of Sana'a, Yemen, 29 April 2022. Aid agencies working in Yemen released on 30 April 2022 the 2022 Yemen Humanitarian Response Plan (HRP), seeking nearly 4.3 billion US dollar to target 17.3 million out of the 23.4 million people in need of lifesaving humanitarian assistance and protection services, after international donors in March 2022 pledged 1.3 billion US dollar – 30 percent of the total requirement for the 2022 HRP. The United Nations ranks Yemen as the worst humanitarian crisis in the world with an estimated 80 percent of its 30 million-population are reliant on humanitarian aid for survival now. The UN estimated that around 161,000 people are likely to experience famine in 2022 and an additional 1.6 million are expected to fall into emergency levels of hunger after the aid agencies suspended vital relief programs in impoverished Yemen as of January 2022 due to severe funding shortfalls. (Photo by Yahya Arhab/EPA/EFE) 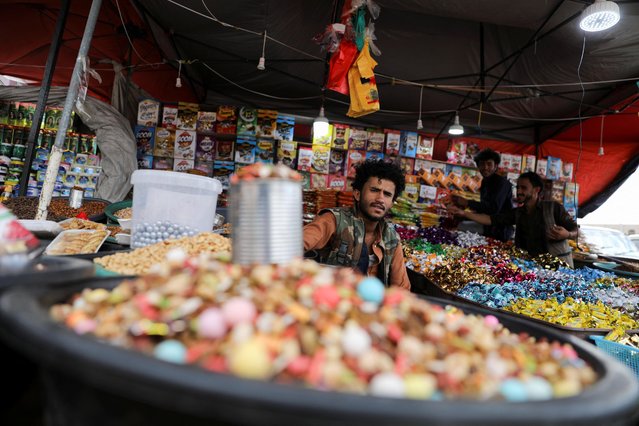 A vendor waits for customers at his sweets stall ahead of Eid al-Fitr, which marks the end of the holy month of Ramadan, in Sanaa, Yemen on April 30, 2022. (Photo by Khaled Abdullah/Reuters) 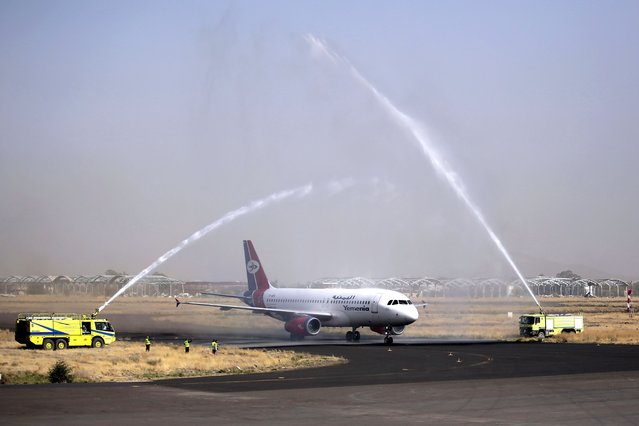 A Yemen Airways plane is greeted with a water spray salute at the Sanaa international airport in Sanaa, Yemen, Monday, May, 16, 2022. The first commercial flight in six years took off from Yemen’s rebel-held capital on Monday, officials said, part of a fragile truce in the county’s grinding civil war. (Photo by Hani Mohammed/AP Photo) 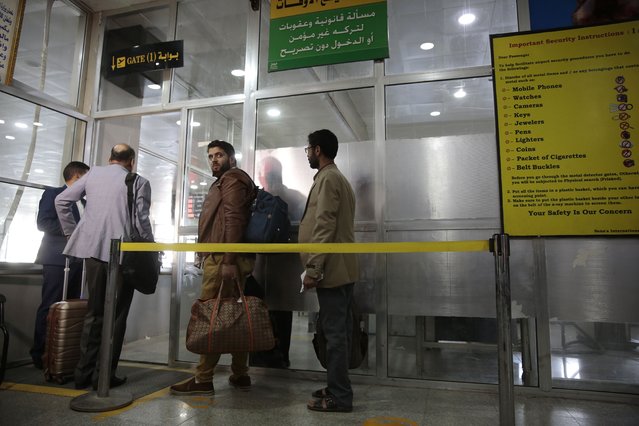 Yemenis queue at the departure lounge to board the first commercial flight at Sanaa airport, Yemen, Monday, May, 16, 2022. (Photo by Hani Mohammed/AP Photo) 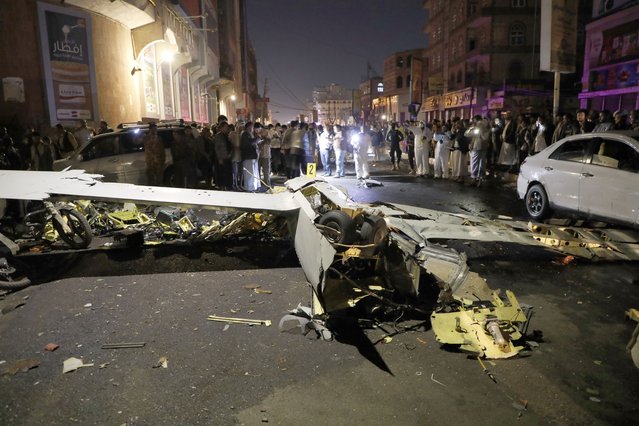 People gather around the wreckage of a drone aircraft which Houthi rebels claimed to have shot down, in Sanaa, Yemen, Monday, May 23, 2022. (Photo by Hani Mohammed/AP Photo) 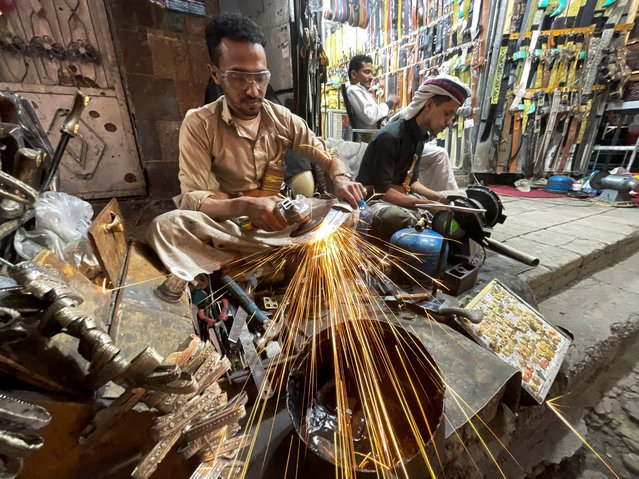 A craftsman grinds the blade of a traditional dagger, known as Jambiya, outside a shop in Sanaa, Yemen on May 23, 2022. (Photo by Khaled Abdullah/Reuters) 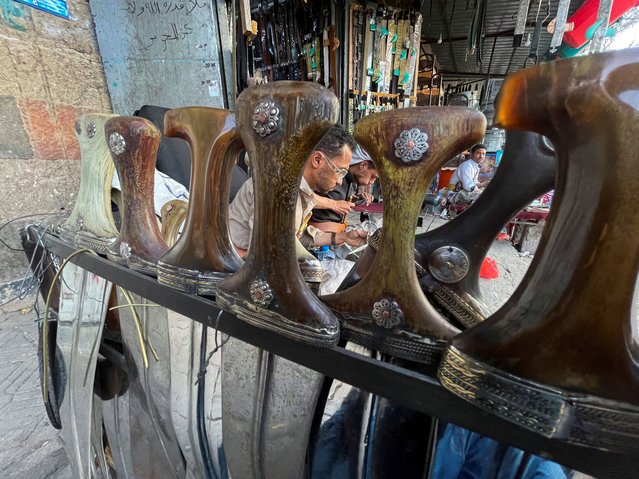 Craftsmen work on traditional daggers, known as Jambiya, outside a shop in Sanaa, Yemen on May 23, 2022. (Photo by Khaled Abdullah/Reuters) 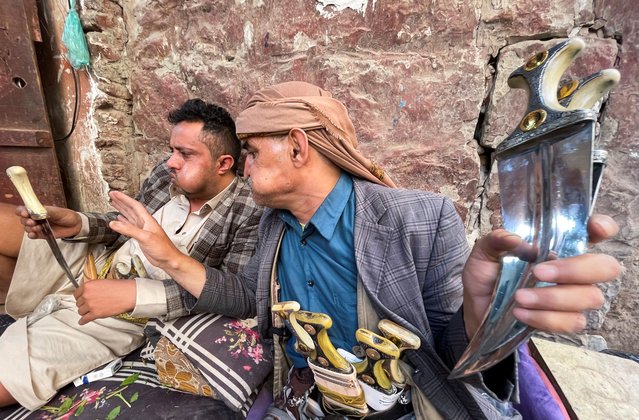 A vendor shows a traditional Yemeni dagger, known as Jambiya, to another vendor at the old quarter of Sanaa, Yemen on May 23, 2022. (Photo by Khaled Abdullah/Reuters) 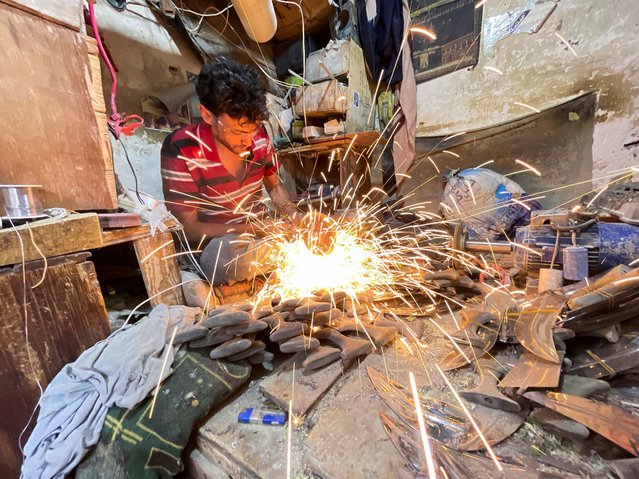 A craftsman grinds the blade of a traditional dagger, known as Jambiya, in his workshop in Sanaa, Yemen on May 23, 2022. (Photo by Khaled Abdullah/Reuters) 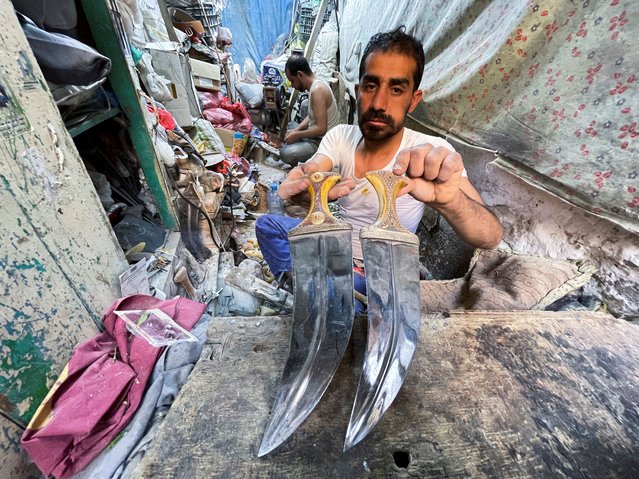 A craftsman shows traditional Yemeni daggers, known as Jambiya, in his workshop in Sanaa, Yemen on May 23, 2022. (Photo by Khaled Abdullah/Reuters) 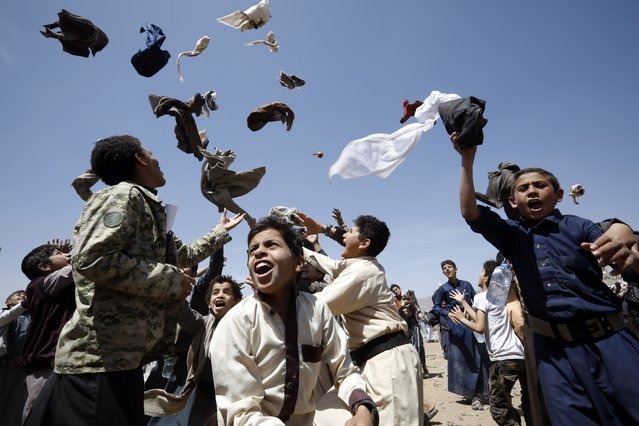 Yemeni boys toss pieces of their clothes in the air on a hot day, in Sana'a, Yemen, 06 June 2022. The Yemen meteorological service has warned of a heatwave and dry weather in most parts of the Arab country which is experiencing the lack of much needed rainfall. (Photo by Yahya Arhab/EPA/EFE) 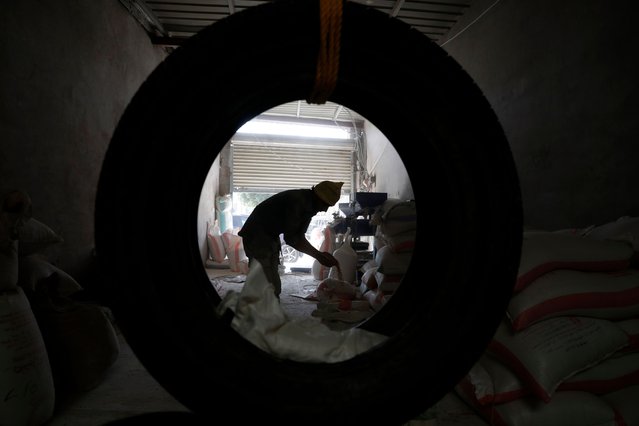 A Yemeni checks wheat grains as he works at a flour mill in Sana'a, Yemen, 11 June 2022. Yemen is looking for alternative wheat markets in order to cover the disruption to global wheat supplies generated by the fallout from the Russian invasion of Ukraine as the war-ravaged Arab country imports about 46 percent of wheat from Russia and Ukraine. The conflict in Ukraine and the prolonged war in Yemen have caused shortages of wheat and food price spikes in the impoverished Arab country, exacerbating its already dire humanitarian situation. Yemen is one of the most food-insecure countries in the world with 19 million Yemenis out of the country’s 30 million population suffer from food insecurity and an additional 1.6 million expected to fall into emergency levels of hunger, bringing the total to 7.3 million people by the end of 2022, the United Nations has warned. (Photo by Yahya Arhab/EPA/EFE) 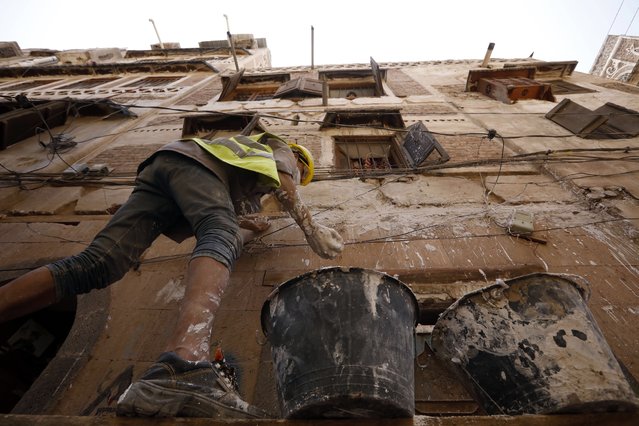 A Yemeni laborer works on the restoration of a UNESCO-listed building in the old city of Sana'a, Yemen, 12 June 2022. Dozens of workers, architects and senior master builders are engaged in urban renovation works since early June 2022 in the old quarter of the Yemeni capital Sana'a, using traditional methods and materials for maintaining its architectural style. The much needed emergency restoration is taking place after unusual torrential rains and a Saudi-led airstrike brought extensive damage to several buildings across the old city over the past few years. The old city of Sana'a was listed as a world heritage site by UNESCO in 1986 as an outstanding expression of Yemen's Arab and Muslim traditional culture. In July 2015, it was inducted to the list of World Heritage in danger due to the damage caused to its cultural heritage. A Saudi-led airstrike targeted an old neighborhood of Sana'a in 2015, destroying completely four historic buildings and killing five people. Three other buildings collapsed, 50 others were severely hit. More than 1,000 buildings have leaky roofs due to heavy rains and associated floods of April and August 2020, according to assessments by the General Organization for the Preservation of Historic Cities in Yemen (GOPHCY). The restoration project, that is funded by the European Union (EU) through UNESCO, is within a 20-million euro agreement signed in March 2022 by the EU and UNESCO for safeguarding Yemen's unique cultural heritage in four provinces across the war-ridden country with its historical richness and cultural and folklore variety. That includes the old city of Sana'a which is a dense warren of centuries-old mud-brick houses. The project focuses on rehabilitation work, urgent interventions and regulatory protection of distinctive multi-story tower buildings. The old city, located in a mountainous valley over 7,200 feet above sea level, was an important center of Islam throughout the 7th and 8th cent. (Photo by Yahya Arhab/EPA/EFE) 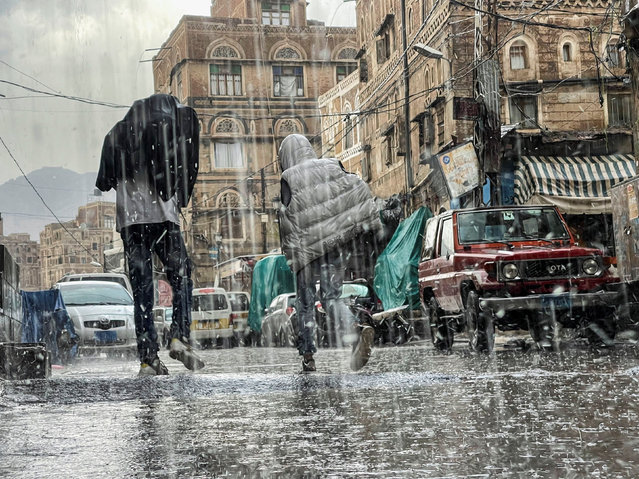 People walk during a rainfall in the old quarter of Sanaa, Yemen on June 25, 2022. (Photo by Khaled Abdullah/Reuters) 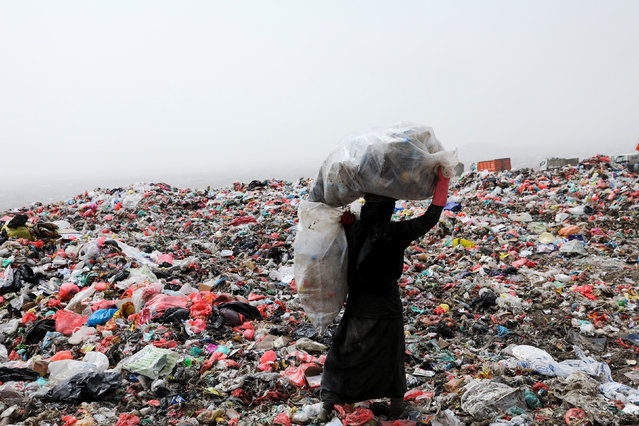