A man walks with a cow near a village partially covered by fog in the mountainous district of Haraz, around 90 kilometers southwest of Sanaa, Yemen on October 2, 2019. (Photo by Khaled Abdullah/Reuters) 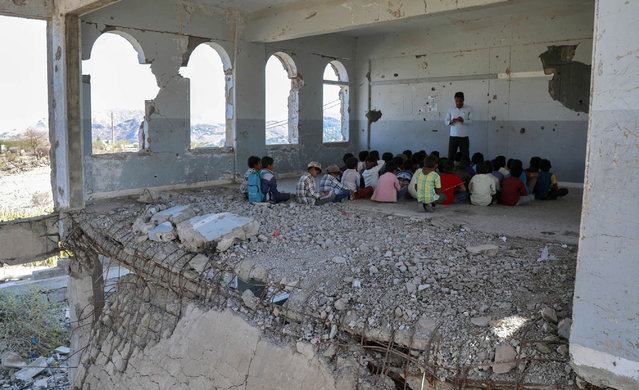 Yemeni children attend class on the first day of the new academic year in the country's third-city of Taez on September 3, 2019, at a school that was damaged last year in an air strike during fighting between the Saudi-backed government forces and the Huthi rebels. (Photo by Ahmad Al-Basha/AFP Photo) 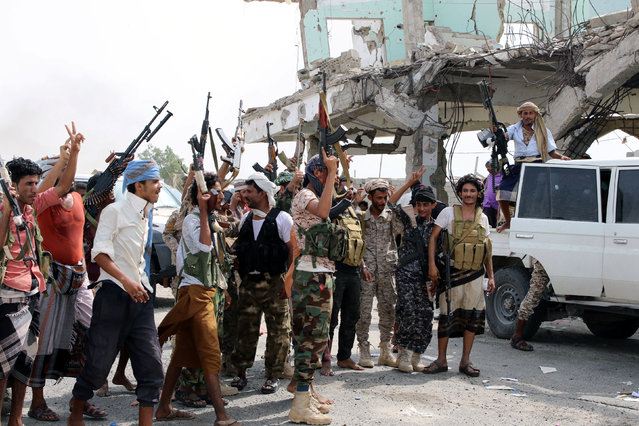 Southern separatist fighters are pictured during clashes with government forces in Aden, Yemen on August 29, 2019. (Photo by Fawaz Salman/Reuters) 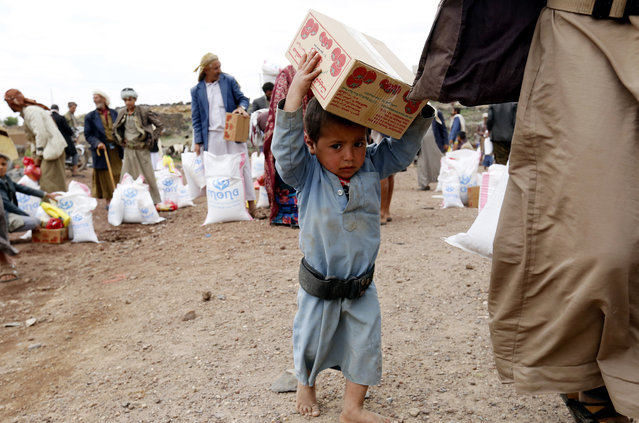 A conflict-ridden Yemeni child carries food rations provided by Mona Relief Yemen at a village on the outskirts of Sana'a, Yemen, 27 August 2019. The ongoing conflict in Yemen since 2015 has created the worst humanitarian crisis in the world, where some 80 percent of Yemen's 26-million population are in need of humanitarian assistance. (Photo by Yahya Arhab/EPA/EFE) 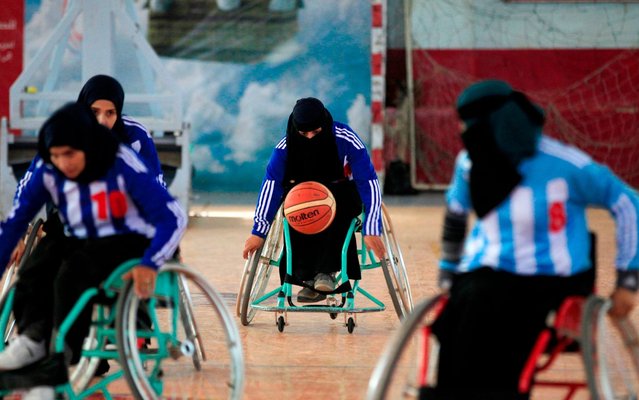 A Yemeni child stands by a truck showing an advertising of launching an anti-polio vaccination campaign on December 23, 2019 in Sana'a, Yemen. A widespread vaccination campaign has launched on Monday and supported by the World Health Organization (WHO) and the United Nations Children's Fund (UNICEF), targeting more than 5.5 million children under the age of five. The campaign is a home-to-home and will continue for three days. (Photo by Mohammed Hamoud/Getty Images) Yemeni children attend class at a school on the outskirts of Sana'a, Yemen, 18 November 2019. The war in Yemen, which has dragged on for nearly five years, has affected over 12 million children, the United Nations says. (Photo by Yahya Arhab/EPA/EFE) Yemenis attend a wedding ceremony in the old city of Sanaa on December 19, 2019. (Photo by Mohammed Huwais/AFP Photo) 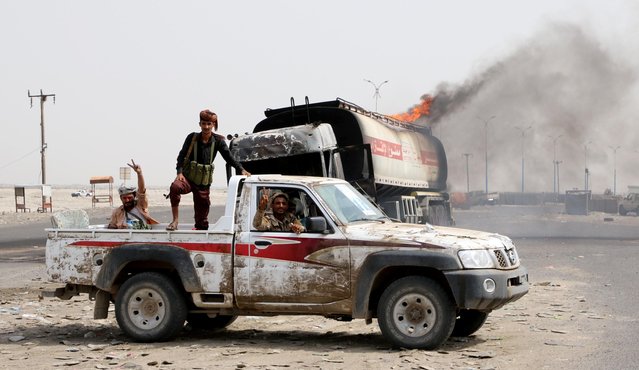 Workers dispose of sacks of wheat flour which reportedly expired after they were provided by the World Food Program (WFP), on the outskirts of Sanaa, Yemen August 28, 2019. (Photo by Mohamed al-Sayaghi/Reuters) A boy waits for food supplies provided by the World Food Programme at a school in Sanaa, Yemen, Sunday, August 25, 2019. The U.N. humanitarian chief in Yemen warned last Wednesday that unless significant new funding is received in the coming weeks, food rations for 12 million people in the war-torn country will be reduced and at least 2.5 million malnourished children will be cut off from life-saving services. (Photo by Hani Mohammed/AP Photo) 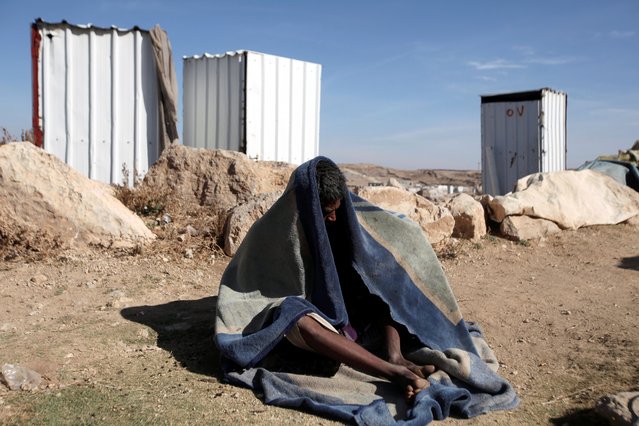 A man covers himself with a blanket as he sits in the sun at a camp for internally displaced people in Khamir of the northwestern province of Amran, Yemen on December 16, 2019. (Photo by Khaled Abdullah/Reuters) In this August 1, 2019, file photo, Houthi rebel fighters ride on trucks mounted with weapons, during a gathering aimed at mobilizing more fighters for the Houthi movement, in Sanaa, Yemen. Airstrikes by the Saudi-led coalition fighting Yemen’s rebels Houthi hit a detention center in southwestern province of Dhamar, officials and the rebels’ health ministry said Sunday. (Photo by Hani Mohammed/AP Photo/File) 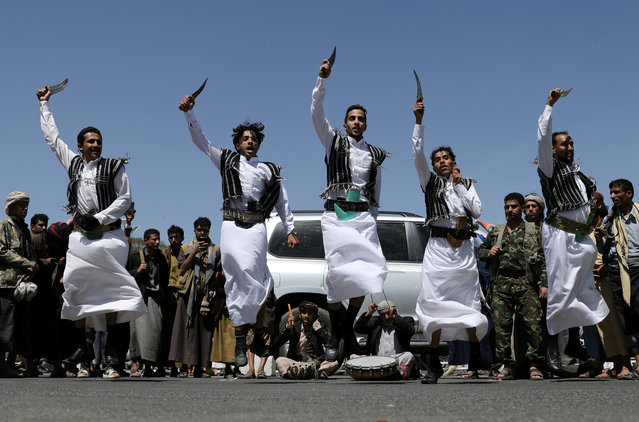 Houthi supporters perform the traditional Baraa dance during a ceremony held to collect supplies for Houthi fighters in Sanaa, Yemen on September 22, 2019. (Photo by Khaled Abdullah/Reuters) 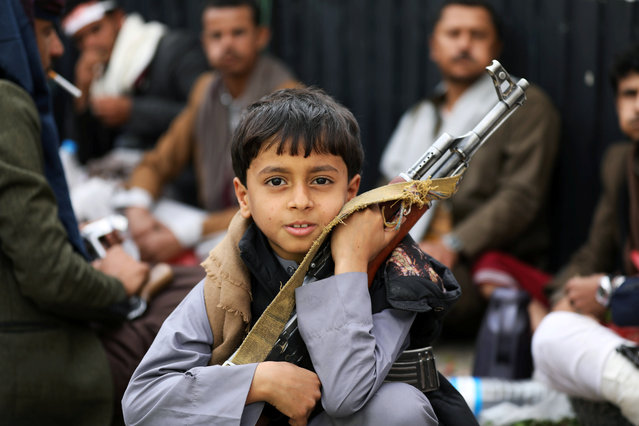 A boy holds a rifle as he attends a rally of Houthi movement supporters to mark the Ashura in Sanaa, Yemen on September 10, 2019. (Photo by Khaled Abdullah/Reuters) 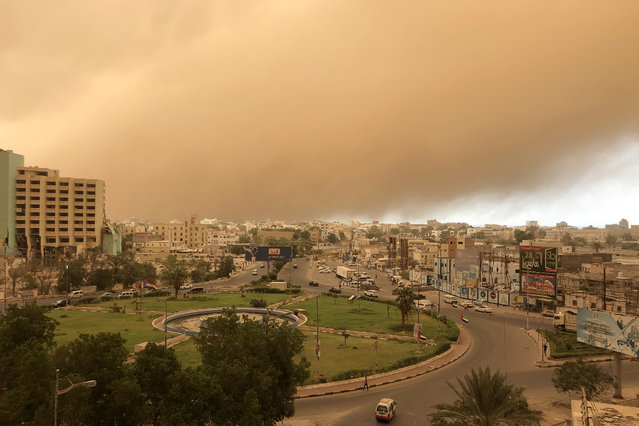 Yemeni recruits allegedly trained by Emirati forces perform combat trainings during a parade in the southern port city of Aden, Yemen, 13 October 2019. According to reports, the UAE has allegedly supported the establishment of new forces of the Southern Transitional Council (STC) that fights for a separate state in the south of Yemen following the UAE's decision to reduce its military presence in southern Yemen. The UAE is a member of the Saudi-led military coalition battling the Houthi rebels on the behalf of the Yemeni government since 2015. (Photo by Najeeb Almahboobi/EPA/EFE) 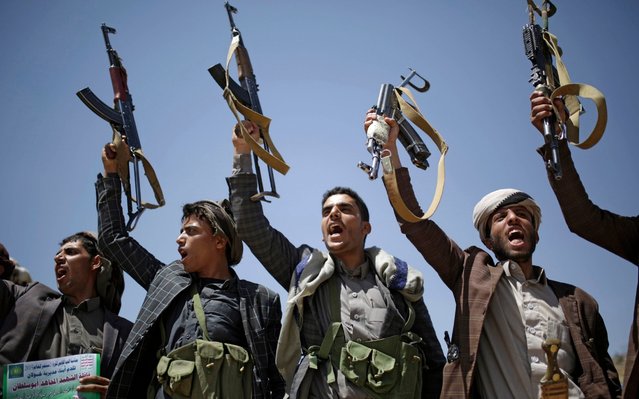 Shiite Houthi tribesmen hold their weapons as they chant slogans during a tribal gathering showing support for the Houthi movement, in Sanaa, Yemen, Saturday September 21, 2019. Yemen's Houthi rebels said late Friday night that they were halting drone and missile attacks against Saudi Arabia, one week after they claimed responsibility for a strike that crippled a key oil facility in the kingdom. (Photo by Hani Mohammed/AP Photo) 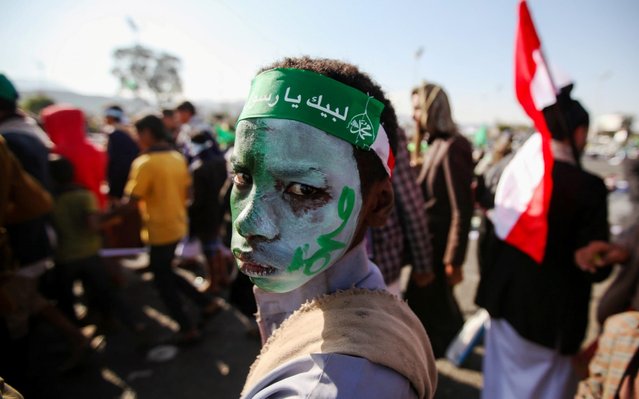 A man looks on as he attends a rally to mark the birthday of the Prophet Muhammad in Sanaa, Yemen on November 9, 2019. The headband reads: “Oh Messenger of Allah!”. (Photo by Khaled Abdullah/Reuters)