Fact A Look at Life in Zimbabwe 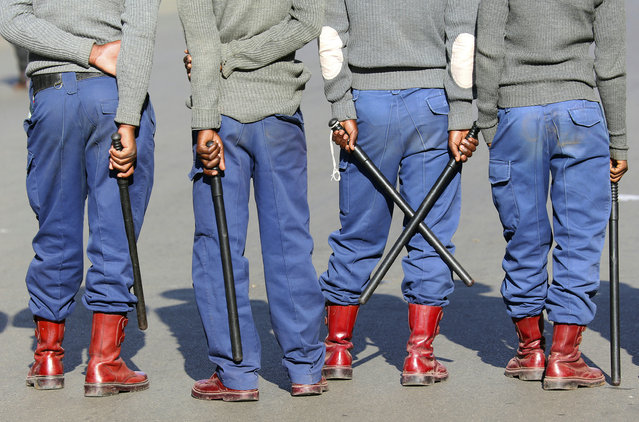 Zimbabwean riot police block a road ahead of a planned protest in Harare, Friday, August 16, 2019. Zimbabwe's police patrolled the streets of the capital Friday morning while many residents stayed home fearing violence from an anti-government demonstration planned by the opposition. (Photo by Tsvangirayi Mukwazhi/AP Photo) 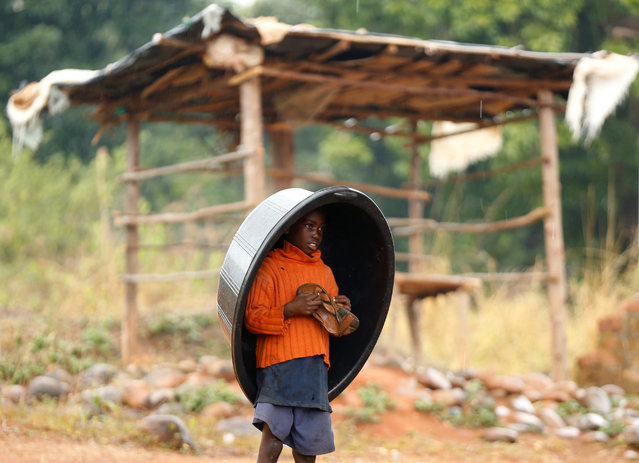 A child shelters from the rain at a marketplace in Honde Valley, Zimbabwe, June 26, 2019. (Photo by Philimon Bulawayo/Reuters) 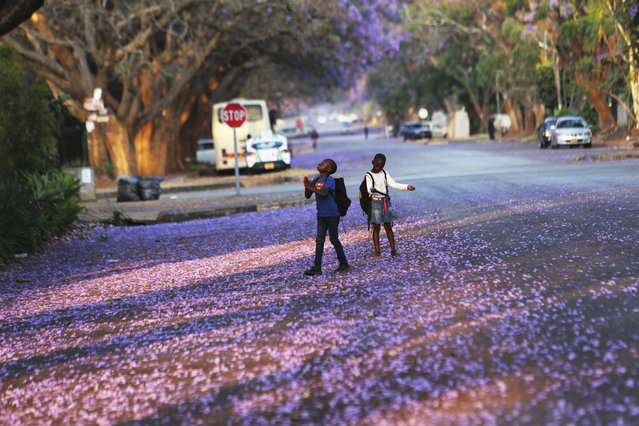 Children play underneath Jacaranda trees lining a street in the capital Harare, Zimbabwe, Friday, October 11, 2019. Zimbabwe now has the world's second highest inflation after Venezuela, according to International Monetary Fund figures. The economy has been on a downward spiral for more than a year as hopes fade that Mugabe's successor and former deputy, President Emmerson Mnangagwa, will deliver on his promises of prosperity. (Photo by Tsvangirayi Mukwazhi/AP Photo) 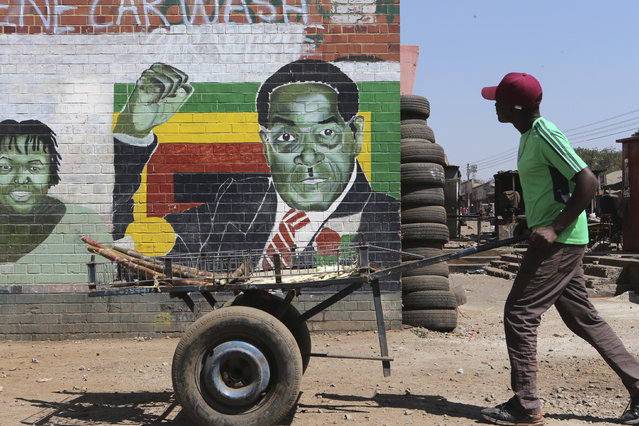 A man pushes an empty cart past a portrait of former Zimbabwean President Robert Mugabe in Harare, Friday, September 6, 2019. Robert Mugabe, the former leader of Zimbabwe forced to resign in 2017 after a 37-year rule whose early promise was eroded by economic turmoil, disputed elections and human rights violations, has died. He was 95. (Photo by Tsvangirayi Mukwazhi/AP Photo) 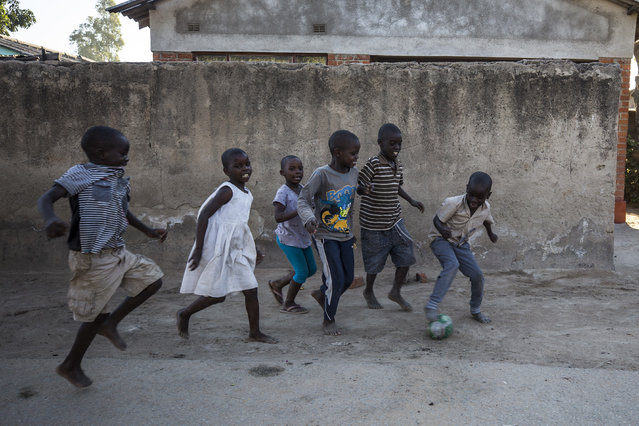 Zimbabwean children play with a ball, made with putting together pieces of papers, after their school during their daily lives in Harare, Zimbabwe on May 13, 2019. (Photo by Mustafa Kamaci/Anadolu Agency/Getty Images) 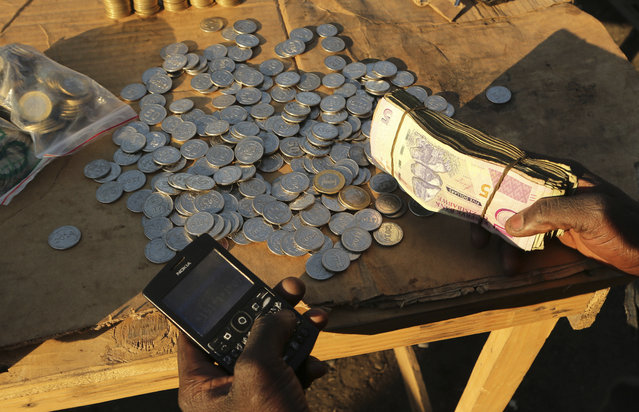 In this photo taken Thursday, August 8, 2019, a vendor transacts on his mobile phone while selling cash in Harare, Zimbabwe. With inflation soaring and cash in short supply, many Zimbabweans transfer funds using their mobile phones and pay a premium to get currency. (Photo by Tsvangirayi Mukwazhi/AP Photo) 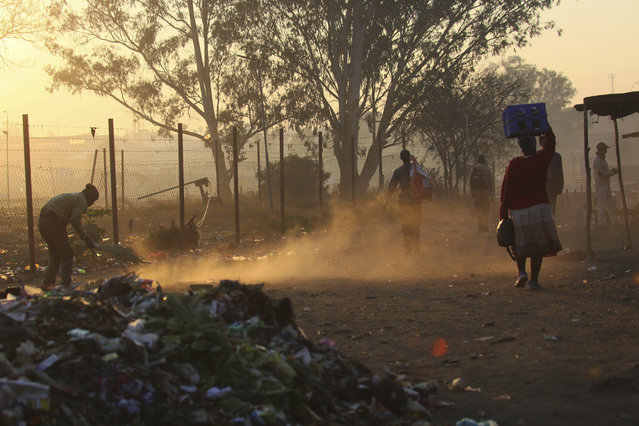 A man sweeps a path near a dumpsite in Harare, Thursday, August 8, 2019. Many Zimbabweans who cheered the downfall of longtime leader Robert Mugabe two years ago have found the country's economy even worse than before. (Photo by Tsvangirayi Mukwazhi/AP Photo) 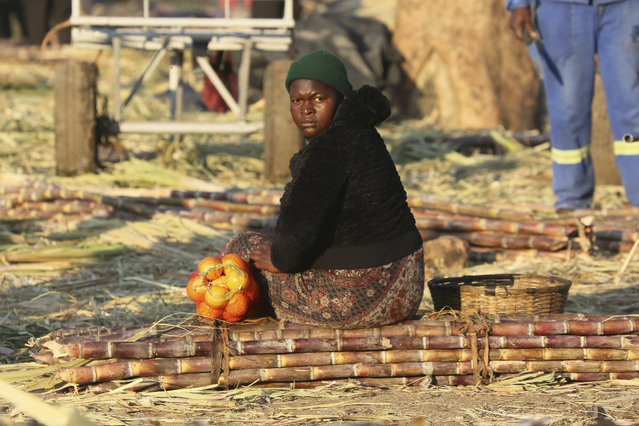 A woman sits on a bunch of sugarcane while waiting for transport at a market place in Harare, Zimbabwe, Wednesday August 14, 2019. Many Zimbabweans are bracing themselves for fresh unrest later this week after the main opposition party called renewed public rallies. (Photo by Tsvangirayi Mukwazhi/AP Photo) 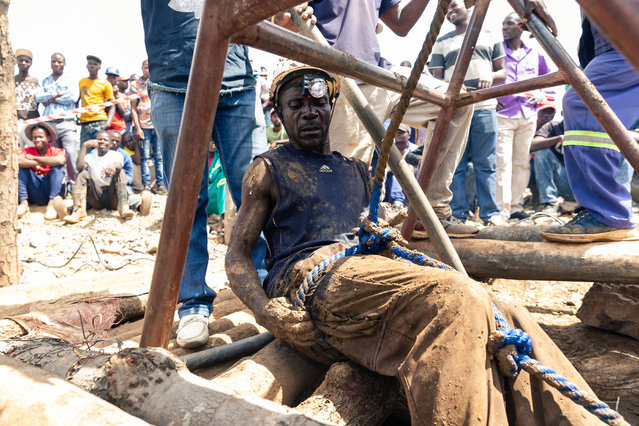 A miner gets ready to decend into a mining pit during a mine search and rescue operation at Cricket Mine in Kadoma, Mashonaland West Province, Zimbabwe where more than 23 artisinal miners are trapped underground and feared dead on February 15, 2018. (Photo by Jekesai Njikizana/AFP Photo) 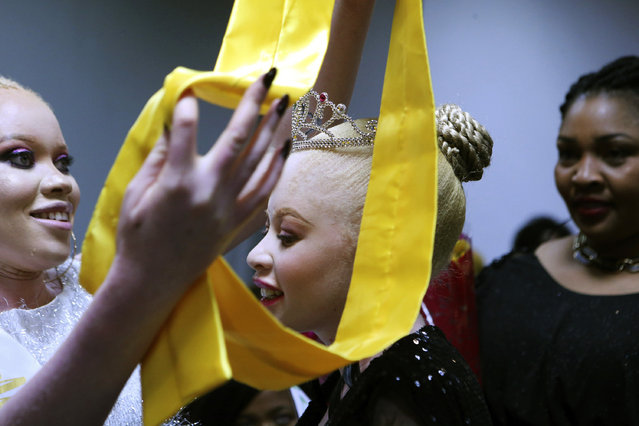 Ayanda Sibanda smiles, after being crowned Miss Albinism Zimbabwe 2019 at an albino pageant held in Harare, early Saturday, May 25, 2019. About 70,000 of Zimbabwe’s estimated 16 million people are born with albinism, according to government figures. They often stand out, making them a subject at times of discrimination, ridicule and dangerously misguided beliefs. The Mr. and Miss Albinism Zimbabwe competition, now in its second year, is a chance to push back. (Photo by Tsvangirayi Mukwazhi/AP Photo) 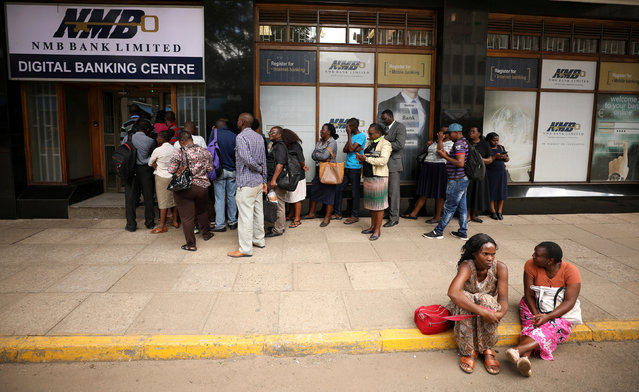 People queue outside a bank in Harare, Zimbabwe on February 22, 2019. (Photo by Mike Hutchings/Reuters) 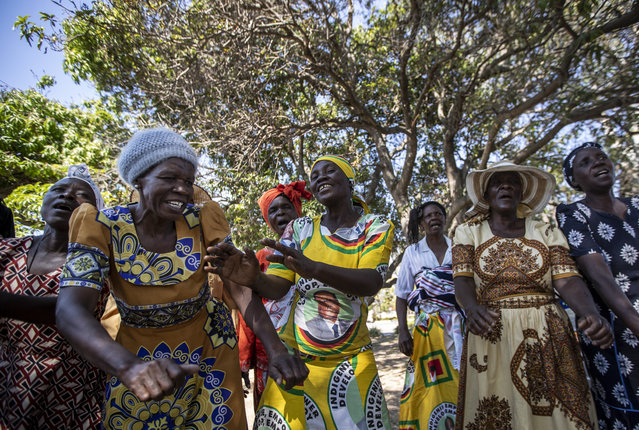 A woman wearing a dress with the face of former president Robert Mugabe, joins with others to sing political songs of his ZANU-PF party, at his house in his home village of Kutama, in Zimbabwe Wednesday, September 11, 2019. The body of Mugabe is being flown to the capital, Harare, on Wednesday where it will be displayed at historic locations for several days before burial at a location still undecided because of friction between the ex-leader's family and the government. (Photo by Ben Curtis/AP Photo) 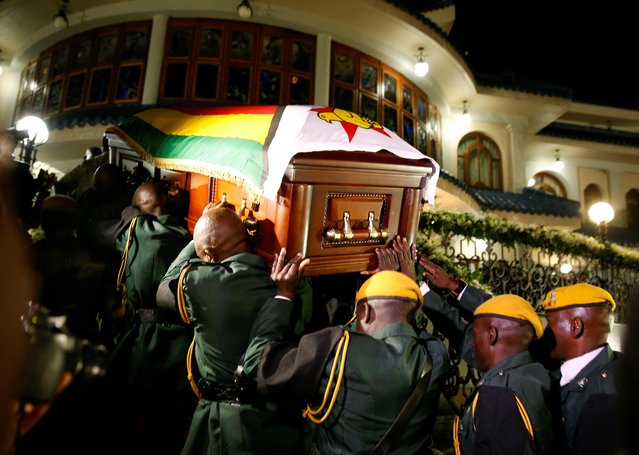 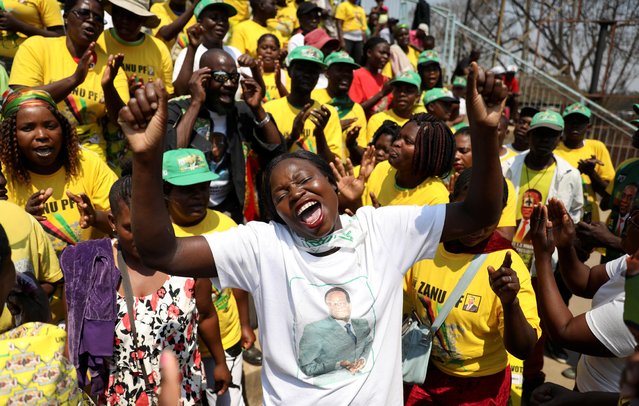 A mourner gestures at Rufaro stadium, in Mbare township where the body of Zimbabwe's founder Robert Mugabe will lie in state, Harare, Zimbabwe, September 12, 2019. (Photo by Siphiwe Sibeko/Reuters) 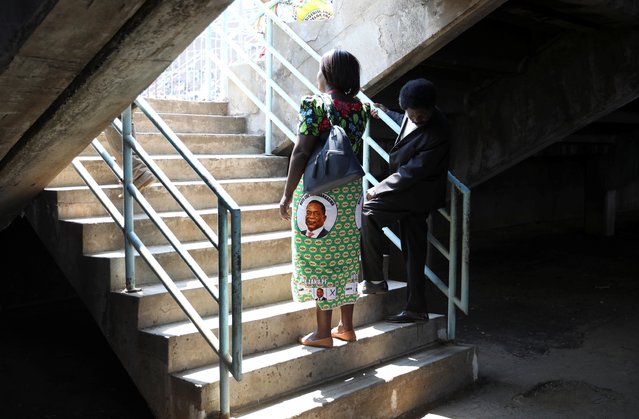 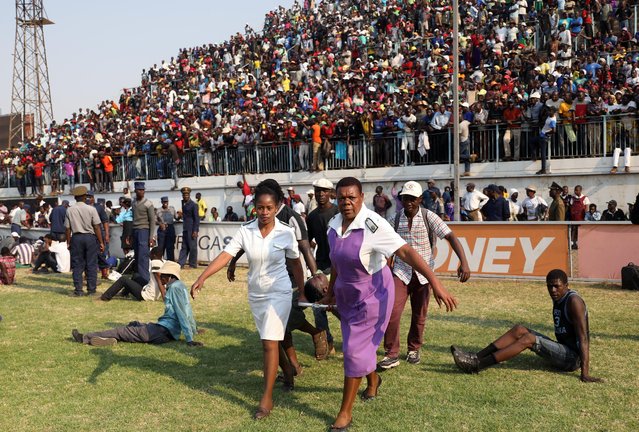 A mourner is put on a stretcher after being involved in a stampede after the public was invited to view Robert Mugabe's body as it lies in state at the Rufaro stadium, in Mbare, Harare, Zimbabwe, September 12, 2019. (Photo by Siphiwe Sibeko/Reuters) 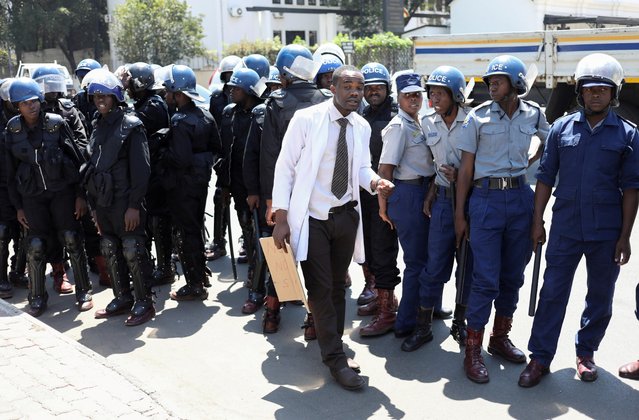 A doctor gestures as he speaks to Police officers during a doctors protest over the disappearance of the leader of their union in Harare, Zimbabwe, September 16, 2019. (Photo by Siphiwe Sibeko/Reuters) 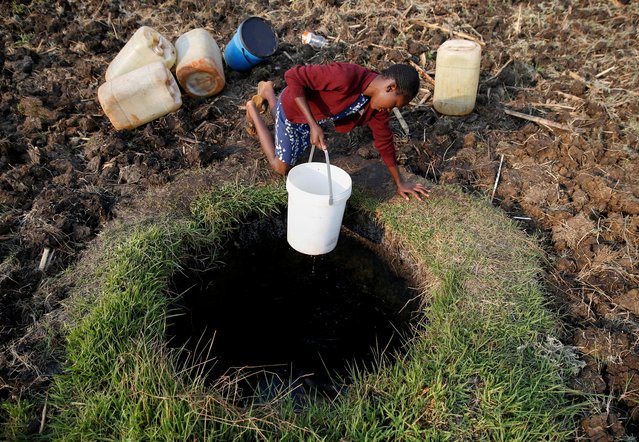 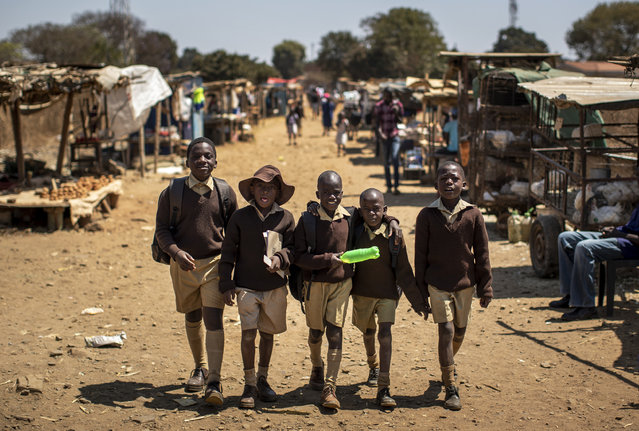 Schoolboys walk back home on the first day of the school term, in Kuwadzana, on the outskirts of the capital Harare, in Zimbabwe, September 10, 2019. Zimbabwe’s capital, Harare, a city of 1.5 million, bustles with activities of people scraping by, including street traders selling second-hand clothes, people striding to work past faded murals of Mugabe and women carrying baskets of laundry they had just washed in a muddy creek. (Photo by Ben Curtis/AP Photo/File) 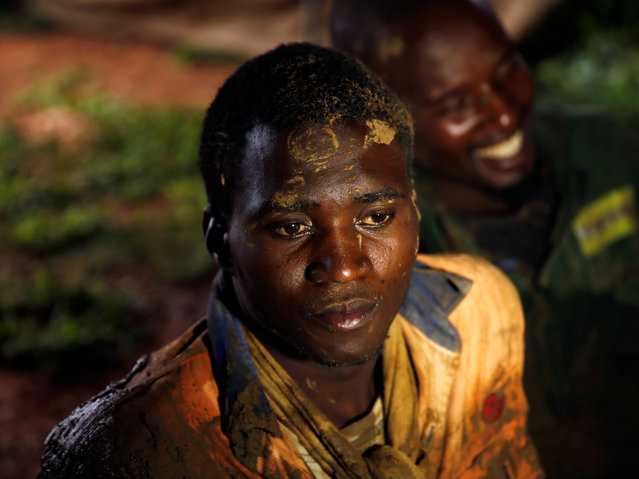 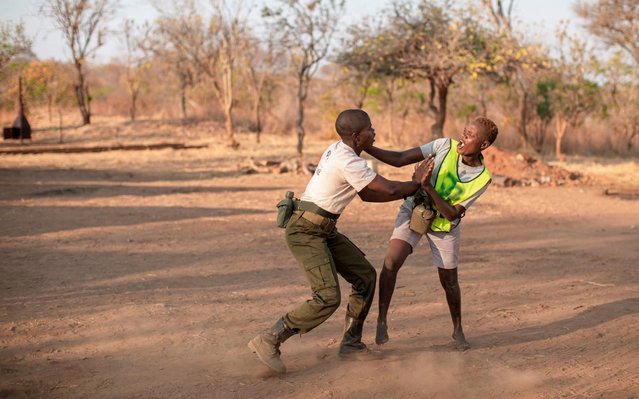 A new recruit, coming from disadvantage and abusive background, and going through a selection process to join the Akashinga Ranger training programme, wrestles with an instructor as part of an anti-bullying exercise, during their selection process in Phundundu, Zimbabwe on September 17, 2019. The programme was started in Phundundu Wildlife Area in Zimbabwe's Lower Zambezi ecosystem. It builds an alternative approach to the militarised paradigm of 'fortress conservation' which defends colonial boundaries between nature and humans. While still trained to deal with any situation they may face, the team has a community-driven interpersonal focus, working with rather than against the local population for the long-term benefits of their own communities and nature. (Photo by Gianluigi Guercia/AFP Photo) 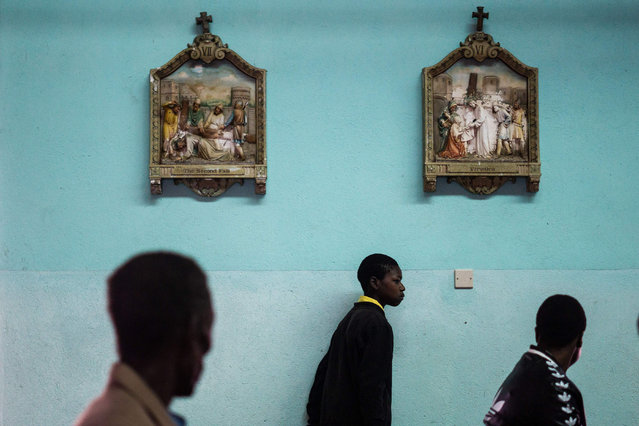 A boy walks in the church during a Sunday mass dedicated to former late Zimbabwean President Robert Mugabe, in Kutama, 80km West of Harare, on September 8, 2019. Former Zimbabwe president Robert Mugabe is expected to be buried next weekend after his body is returned from Singapore where he died two days ago, a presidential spokesman said on September 8, 2019. Mugabe, a guerrilla leader who swept to power after Zimbabwe's independence from Britain and went on to rule for 37 years until he was ousted in 2017, died on September 6, 2019, aged 95. (Photo by Zinyange Auntony/AFP Photo) 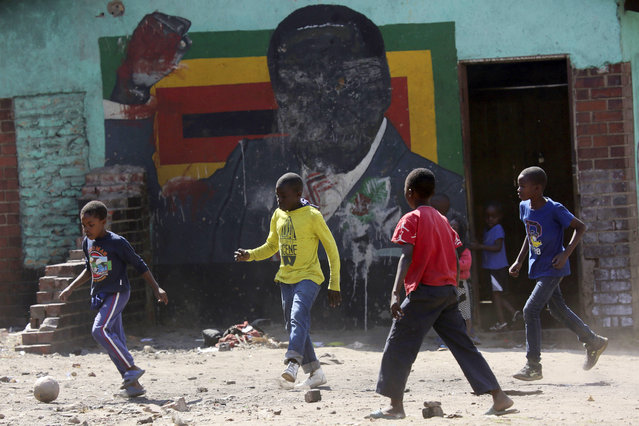 Children play soccer next to a defaced portrait of Former Zimbabwean President Robert Mugabe in Harare, Friday, September 6 2019. Robert Mugabe, the former leader of Zimbabwe forced to resign in 2017 after a 37-year rule whose early promise was eroded by economic turmoil, disputed elections and human rights violations, has died. He was 95. (Photo by Tsvangirayi Mukwazhi/AP Photo) 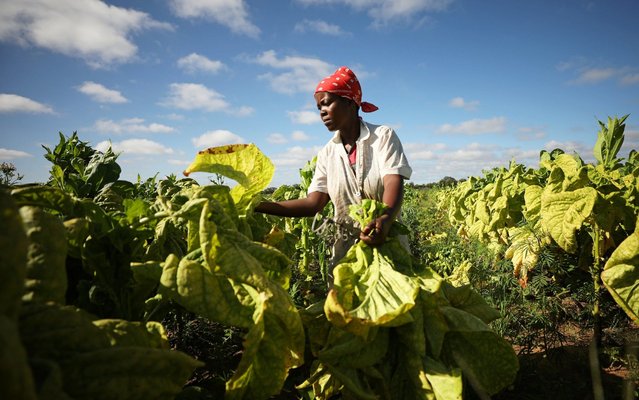 A woman harvests tobacco at a farm outside Harare, Zimbabwe, February 20, 2019. (Photo by Mike Hutchings/Reuters) 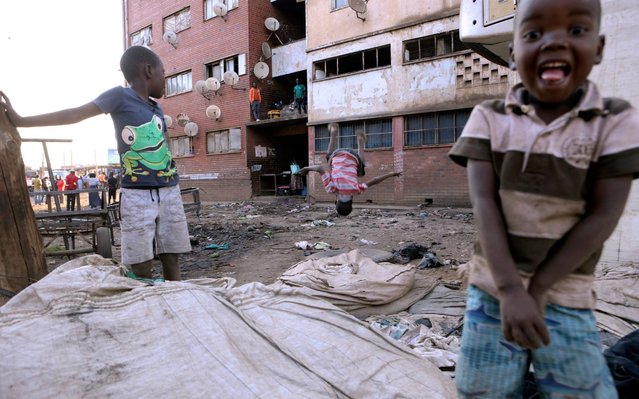