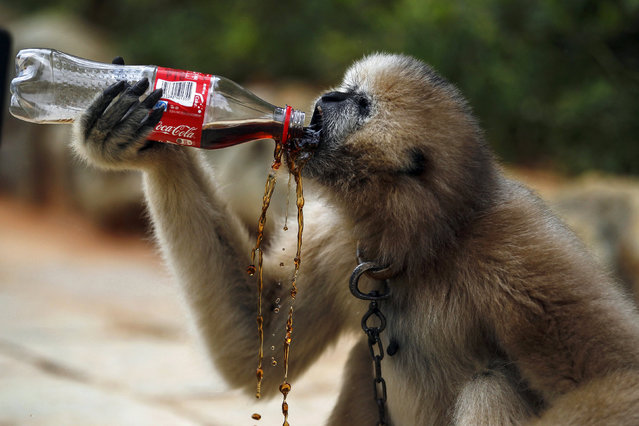 A gibbon drinks from a soft drink bottle, given by a tourist, at a zoo in Kunming, Yunnan province, June 18, 2015. (Photo by Wong Campion/Reuters) 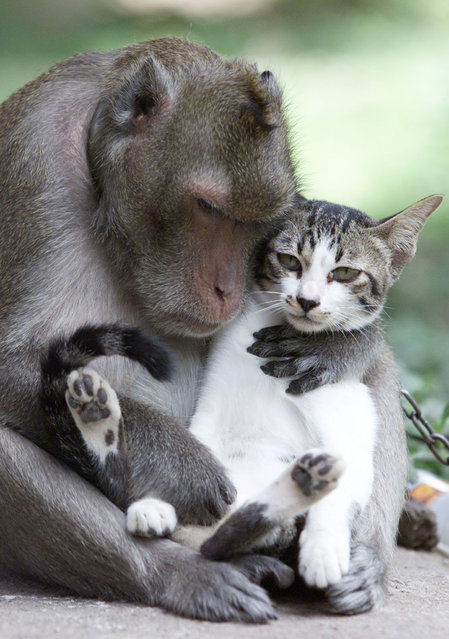 Piek, a four-year-old monkey, checks one-year-old Pom for lice at a temple in Ayutthaya, Thailand August 7, 2002. Both animals were abandoned at the temple by their owners a year earlier. Since then they have become playmates and taken care of each other. (Photo by Sukree Sukplang/Reuters) 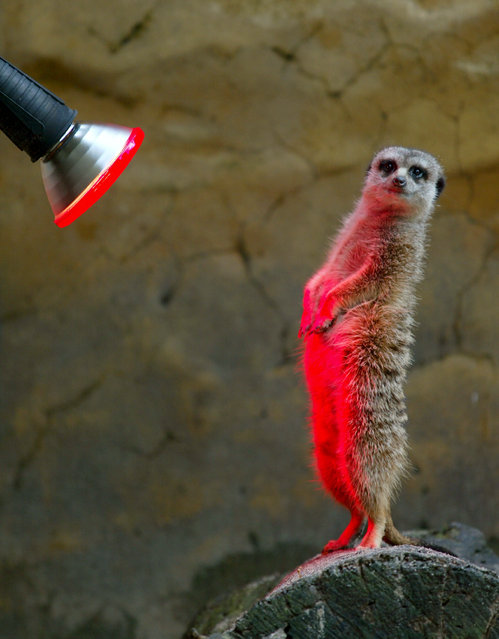 A meerkat warms itself under the glow of a heat lamp in its enclosure at Taronga Zoo in Sydney, Australia July 3, 2003. (Photo by Will Burgess/Reuters) 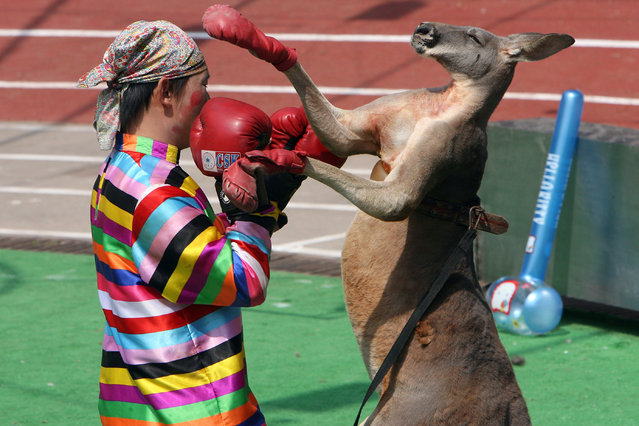 A clown boxes with a kangaroo during an animals “Olympics” performance in the Shanghai Wild Animal Park, China September 28, 2006. (Photo by Nir Elias/Reuters) 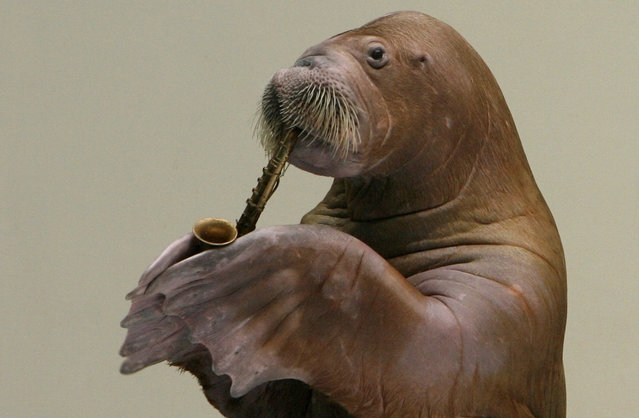 Sara the walrus performs during a show at the Dolphinarium in Istanbul, Turkey December 4, 2008. (Photo by Osman Orsal/Reuters) 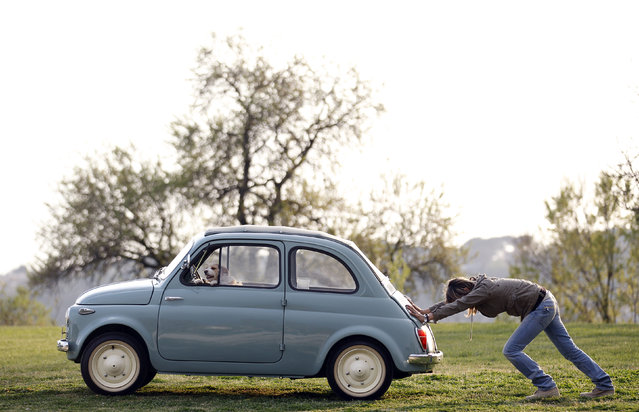 A woman pushes her Fiat 500 car as her dog sits inside, in a neighborhood of Rome, Italy March 23, 2012. (Photo by Alessandro Bianchi/Reuters) 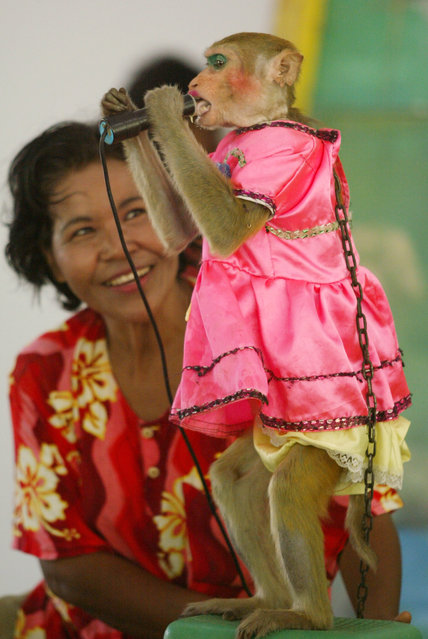 Kanchana, a 17-year-old macaque, “performs” a hit song during a monkey show in Lopburi province, Thailand May 30, 2003. (Photo by Sukree Sukplang/Reuters) 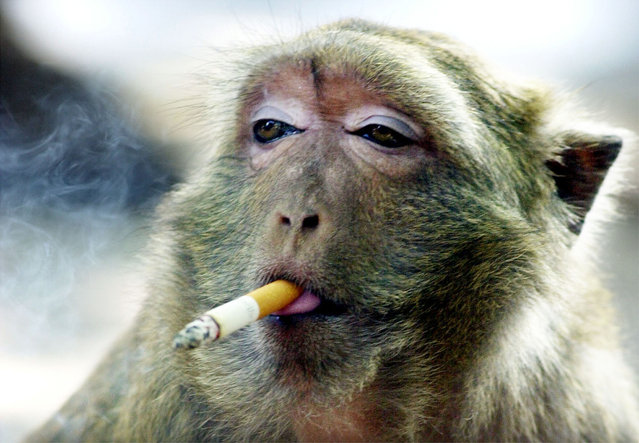 Namwan, a 10-year-old female monkey, takes a puff on a cigarette at a temple in Kanchanaburi, west of Bangkok, Thailand November 28. After being discarded by her owners at the temple, Namwan started to pick up and smoke used cigarette butts and has now become addicted to smoking. Namwan now asks passersby for a cigarette to help fuel the habit. (Photo by Sukree Sukplang/Reuters) 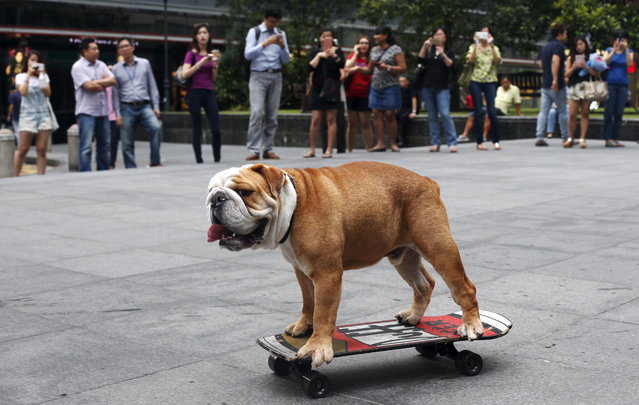 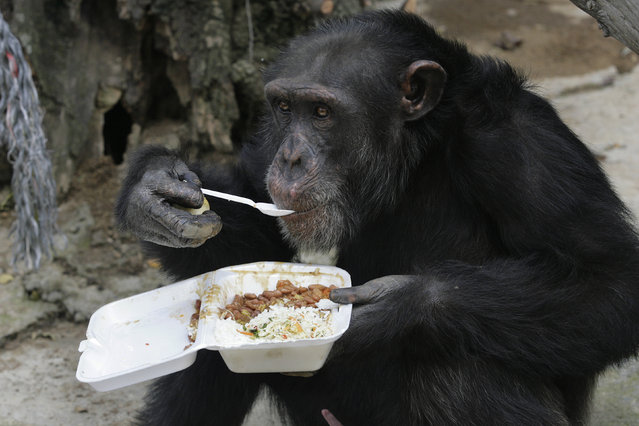 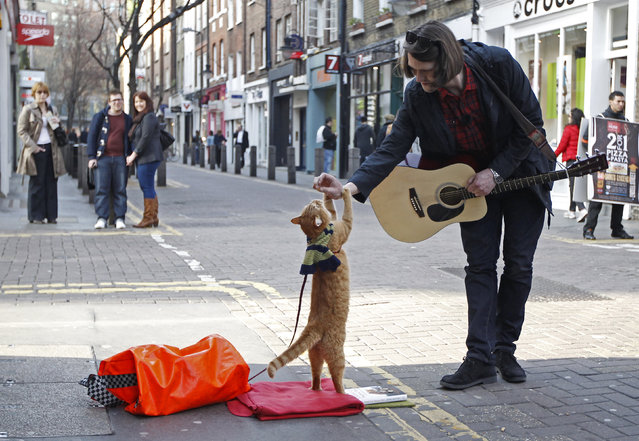 Street musician James Bowen busks with cat Bob in Covent Garden in London, England March 13, 2012. Bowen has written a book named “A Street Cat Named Bob” about the experiences of the then-homeless pair and how they met. (Photo by Luke MacGregor/Reuters) 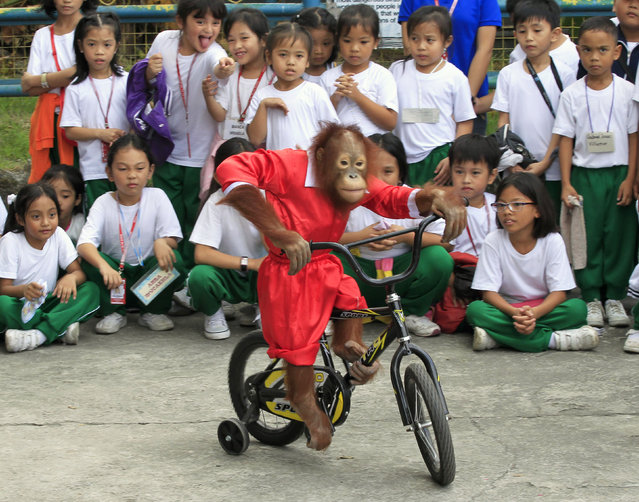 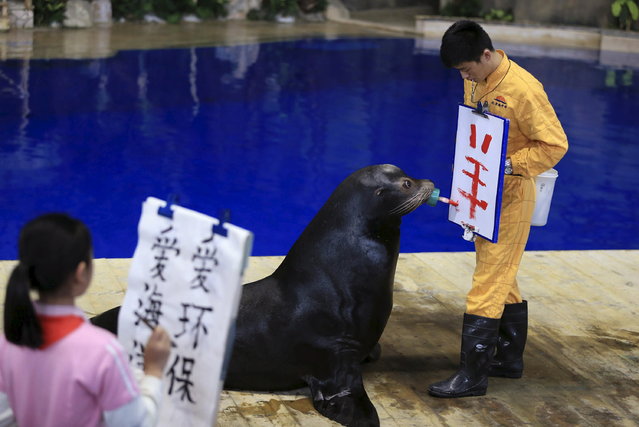 A trained sea lion writes the Chinese character “yang”, which means “goat” or “sheep”, on a board held by its trainer during a performance at the Beijing Aquarium, in Beijing, China April 23, 2015. (Photo by Reuters/Stringer) 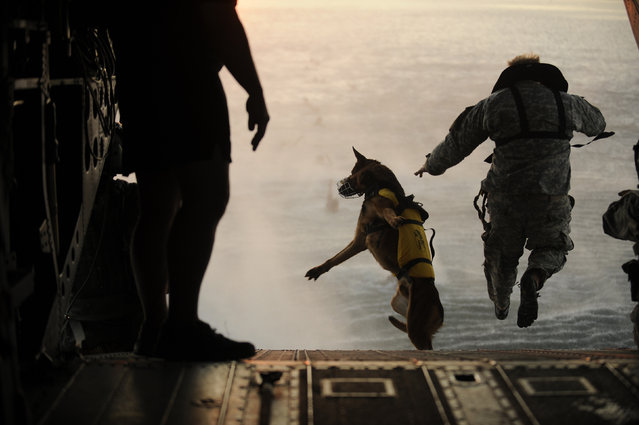 A U.S. Army soldier with the 10th Special Forces Group and his military working dog jump off the ramp of a CH-47 Chinook helicopter from the 160th Special Operations Aviation Regiment during water training over the Gulf of Mexico as part of exercise Emerald Warrior 2011, March 1, 2011. (Photo by Manuel J. Martinez/Reuters/U.S. Air Force) 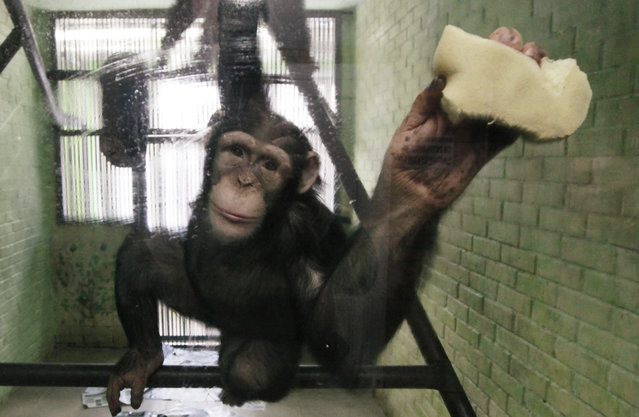 Anfisa, a 8-year-old female chimpanzee, washes a window of her enclosure where she lives with a male chimpanzee named Tikhon, at the Royev Ruchey zoo in Krasnoyarsk, Siberia, Russia January 29, 2013. (Photo by Ilya Naymushin/Reuters) 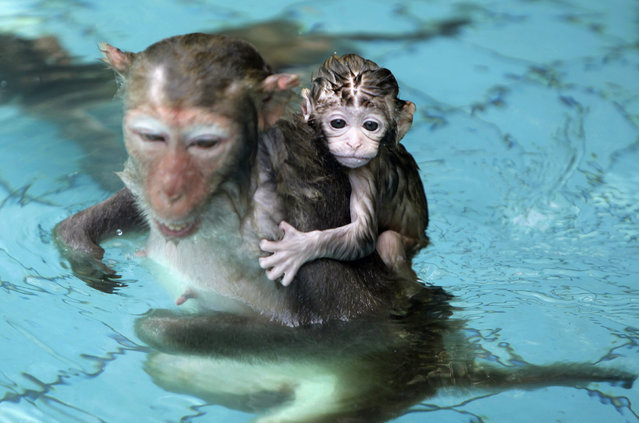 A baby monkey holds on to its mother in a swimming pool to escape the summer heat at Nanwan Monkey Island in Lingshui county, Hainan province, China June 29, 2010. (Photo by Kevin Zhao/Reuters) 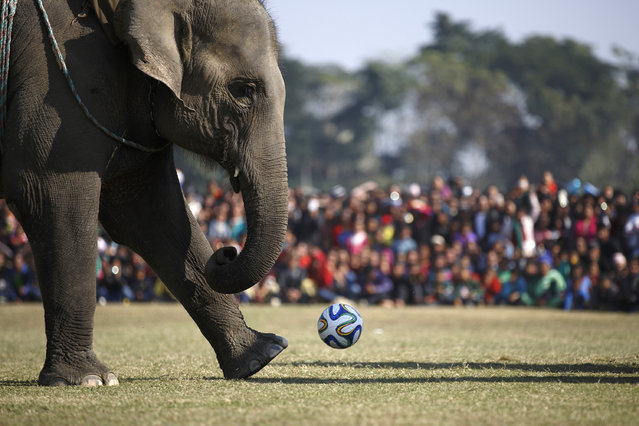 An elephant runs to kick a ball while playing in a soccer match during an Elephant Festival event at Sauraha in Chitwan, Nepal December 30, 2014. (Photo by Navesh Chitrakar/Reuters) 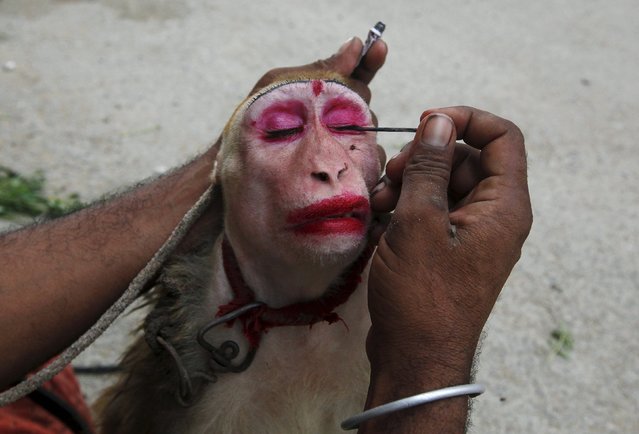 A man applies kohl eye make up to his pet monkey, named Gulabo (pinky), before it performs tricks for money along streets in Karachi, Pakistan, May 31, 2015. (Photo by Akhtar Soomro/Reuters) 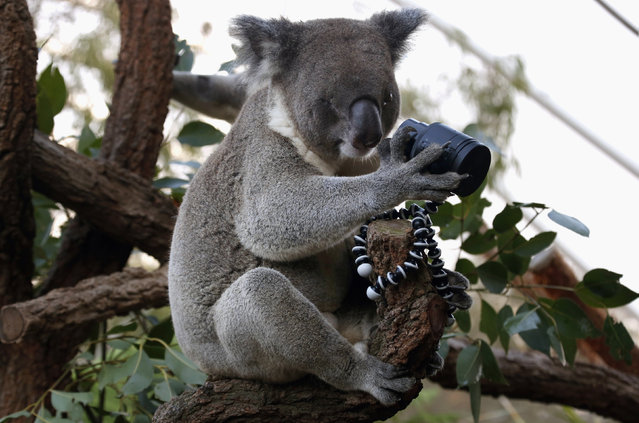 An Australian koala, that was born with a damaged eye, looks at a camera as it sits atop a branch in its enclosure at Wild Life Sydney Zoo, Australia April 3, 2014. (Photo by David Gray/Reuters) 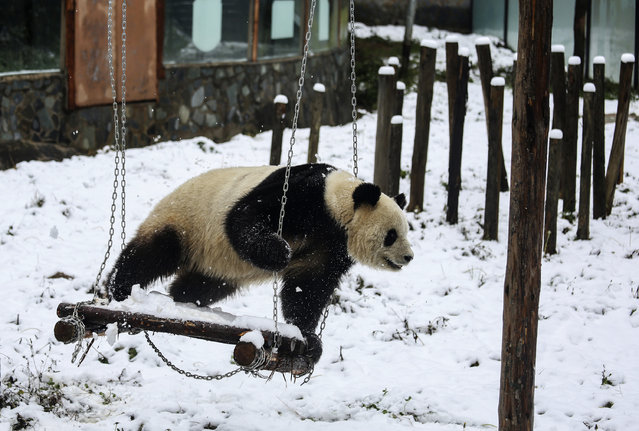