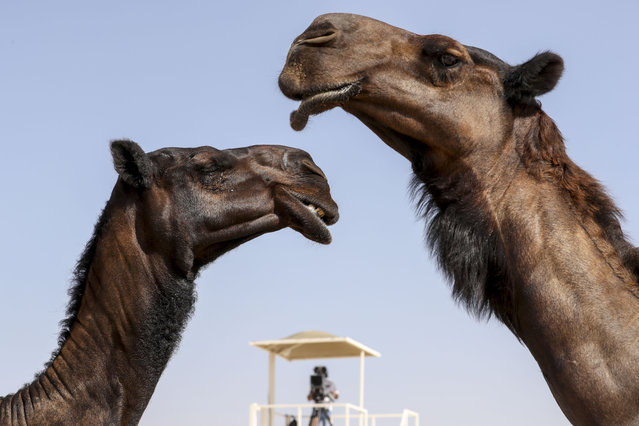 The festival also displays Bedouin lifestyle to the world at Madinat Zayed in Al Dhafra region of Abu Dhabi on December 21, 2021. (Photo by Khushnum Bhandari/The National) 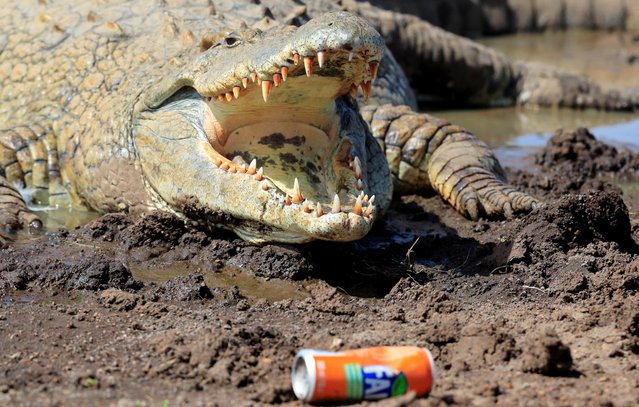 A crocodile sunbathes near a discarded can at a waterbody inside the Nairobi National Park (NNP), in Nairobi, Kenya on December 29, 2021. (Photo by Thomas Mukoya/Reuters) 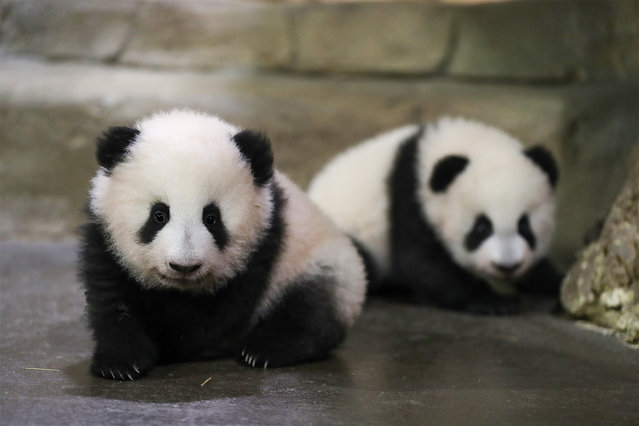 In this photo provided by Zooparc de Beauval, twin panda cubs, Yuandudu and Huanlili take their first steps in public, at the Beauval Zoo in Saint-Aignan-sur-Cher, France, Saturday, December 11, 2021. The female twins were born in August. Their mother, Huan Huan, and father, Yuan Zi, are at the Beauval Zoo, south of Paris, on a 10-year loan from China aimed at highlighting good ties with France. (Photo by Zooparc de Beauval via AP Photo) 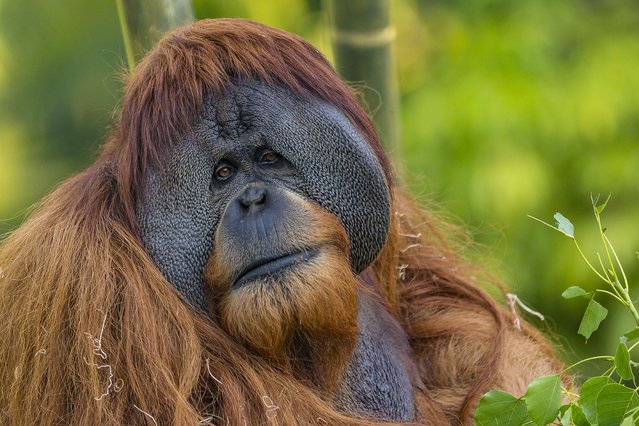 In a photo, date not known, provided by the San Diego Zoo is Satu, a male orangutan at the San Diego Zoo in San Diego. Satu, 26 died Wednesday, December 22, 2021. The zoo announced Satu's death on social media on Thursday, saying the orangutan's cause of death is likely to be related to cancer. (Photo by Ken Bohn/San Diego Wildlife Alliance via AP Photo) 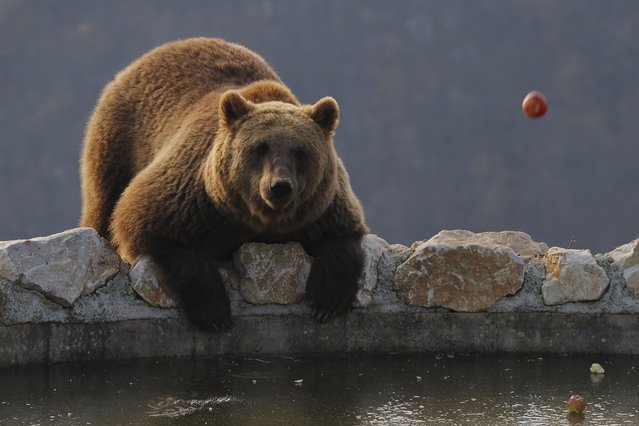 A brown bear looks on for apples in a bear sanctuary near the village of Mramor, Kosovo, 22 December 2021. The Bear Sanctuary Pristina has rescued bears from private restaurants around Kosovo and Albania. All privately kept brown bears lived in small cages at restaurants. They were born mostly in the forests of Kosovo or Albania and snatched from their mothers by animal dealers. (Photo by Valdrin Xhemaj/EPA/EFE) 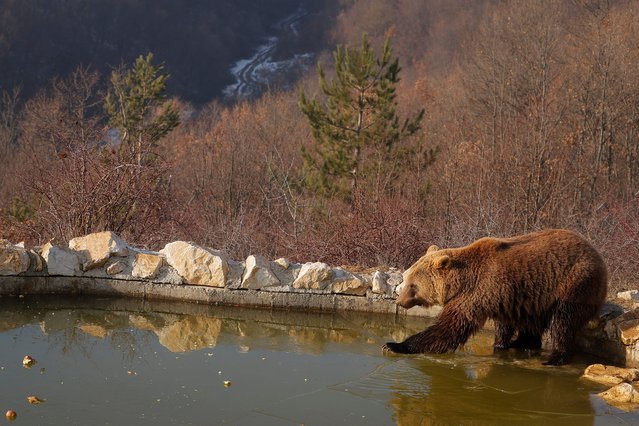 A brown bear catches apples from the iced surface of a little pond in a bear sanctuary near the village of Mramor, Kosovo, 22 December 2021. (Photo by Valdrin Xhemaj/EPA/EFE) 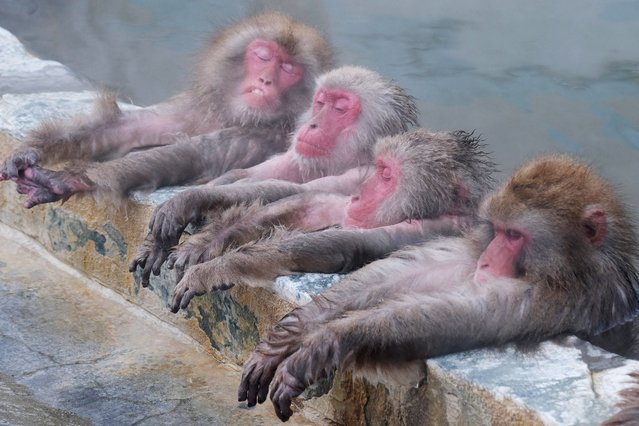 A group of Japanese monkeys soak themseves in the hot spring at the Hakodate Tropical Garden in Yunokawa Hot Spring resort, Hakodate, Hokkaido Prefecture on December 14, 2021. The monkeys are delicate and sensitive to the temperature and they can relax and enjoy in a hot spring, of which the temperature should be around 40 C degrees. (Photo by Noriaki Sasaki/The Yomiuri Shimbun via AFP Photo) 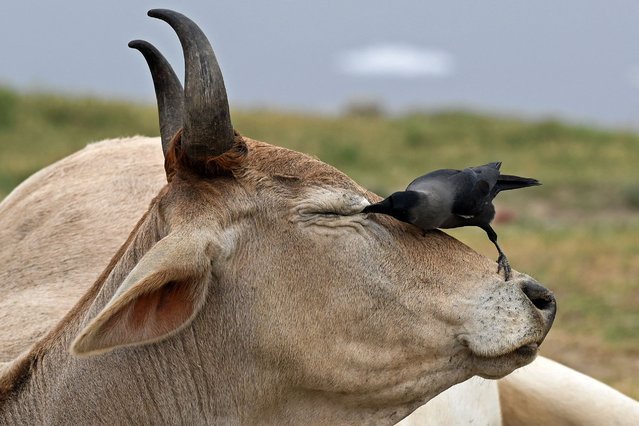 A crow perches on the head of a cow in New Delhi on December 26, 2021. (Photo by Sajjad Hussain/AFP Photo) 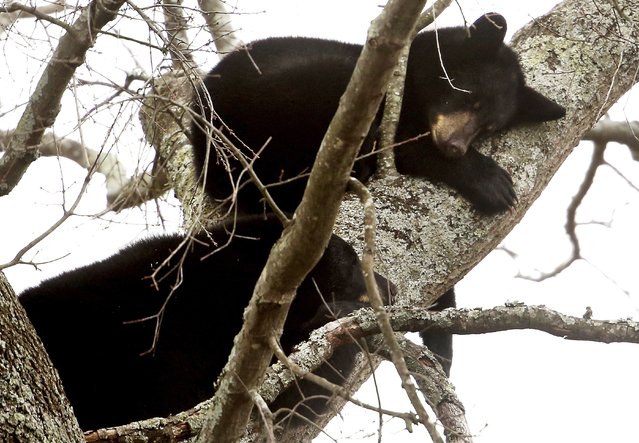 Two of the four bears sleeping in a tree on Bruin Drive in Chesapeake, Va., on Monday, December 27, 2021. (Photo by Stephen M. Katz/The Virginian-Pilot via AP Photo) 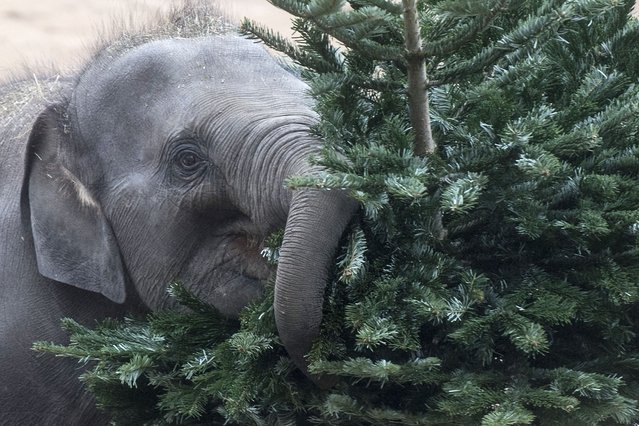 An elephant feeds on an old Christmas tree in their enclosure of Prague's Zoo on December 28, 2021. (Photo by Michal Cizek/AFP Photo) 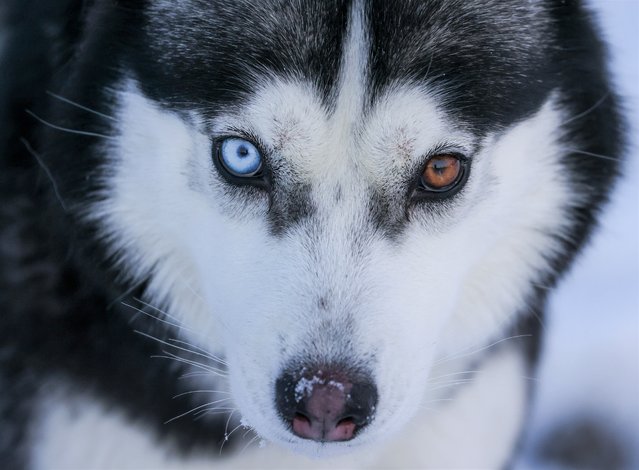 A Husky dog lives in the rural town of Usva, Perm Territory, Russia on December 23, 2021. (Photo by Sergei Malgavko/TASS) 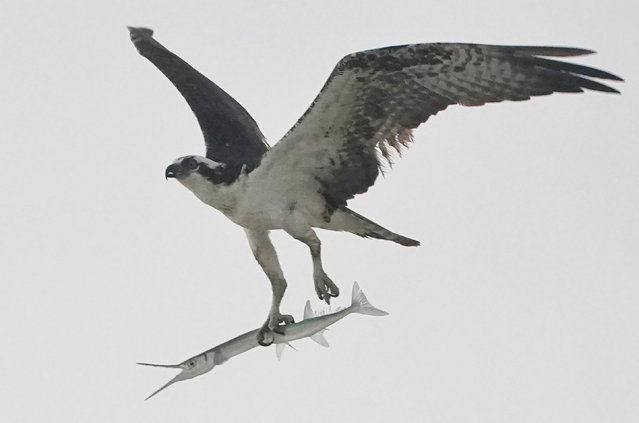 An osprey carries off a hound fish along the beach, Monday, December 13, 2021, in Surfside, Fla. (Photo by Wilfredo Lee/AP Photo) 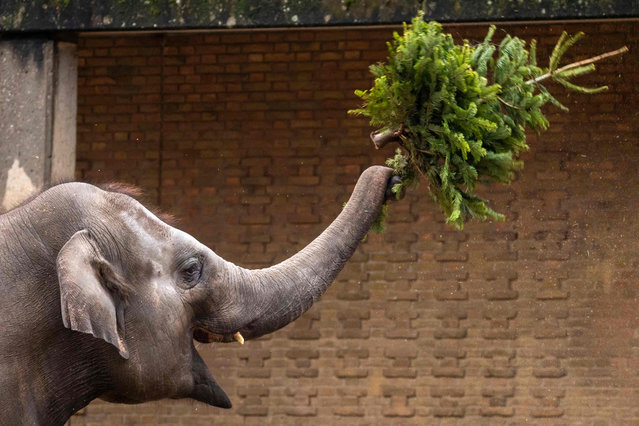 An elephant tosses a Chrismas tree at the Berlin Zoo, Germany, on December 29, 2021. Many of the Christmas trees left over after the festivity period end up as food for various animals in Berlin's zoo. (Photo by Odd Andersen/AFP Photo) 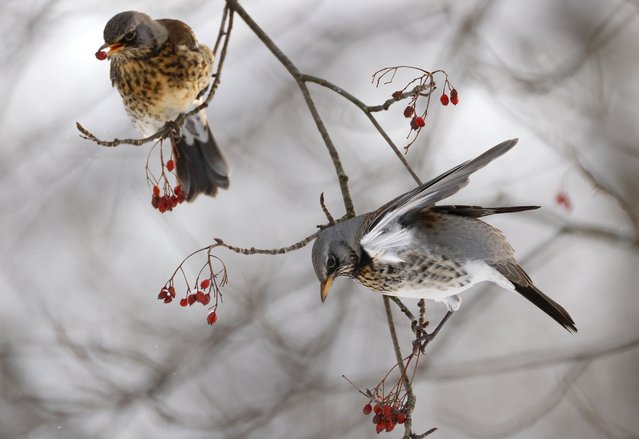 Fieldfares are seen on a rowanberry tree at the Tsitsin Main Botanical Garden in Moscow, Russia on December 25, 2021. (Photo by Vasily Fedosenko/TASS) 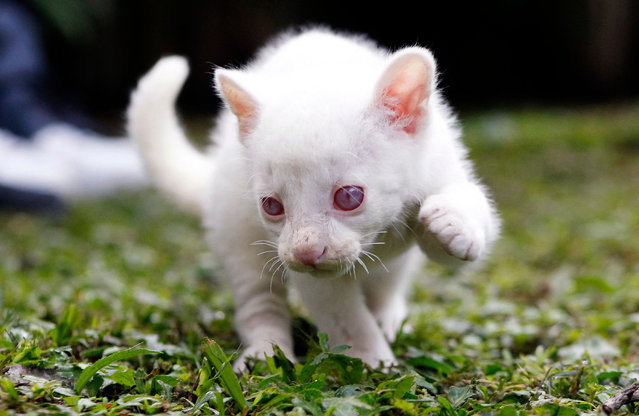 An alleged albino cub of Jaguarundi (Herpailurus yagouaroundi) plays at the Conservation Park in Medellin, Colombia, on December 23, 2021. According to environmentalists of the Conservation Park of Medellin, the little Jaguarundi will have to live in captivity as its albinism prevents it to hunt, camouflage, and protect itself from predators in the wild. (Photo by Fredy Builes/AFP Photo) 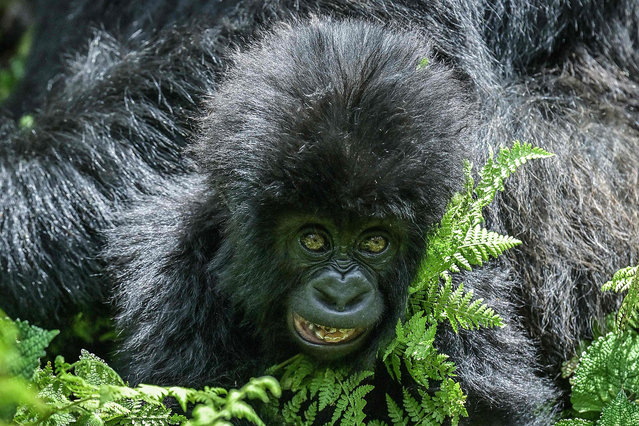 An infant mountain baby gorilla looks on at the Volcanoes National Park, Rwanda, on October 29, 2021. With hundreds of mountain gorillas in residence, the Volcanoes National Park in Rwanda is a conservation triumph. But this resurgence is not without consequences, as the majestic creatures now struggle for space to grow and thrive Thanks to this revival, the mountain gorilla, known for its thick, shiny fur, is now listed as “endangered” by the International Union for Conservation of Nature, unlike other great apes which remain “critically endangered”. The animal has come a long way since the 1980s when decades of poaching caused its population to plunge to just 250 across the Virunga range. (Photo by Simon Maina/AFP Photo) 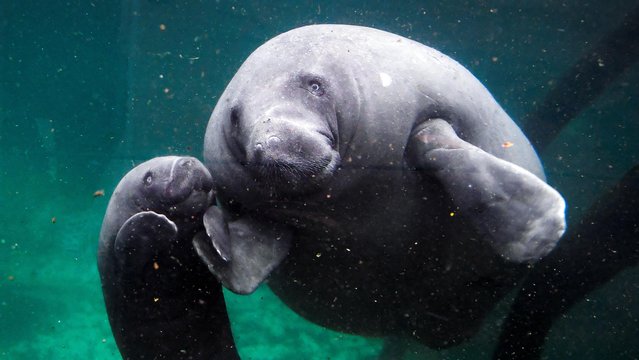 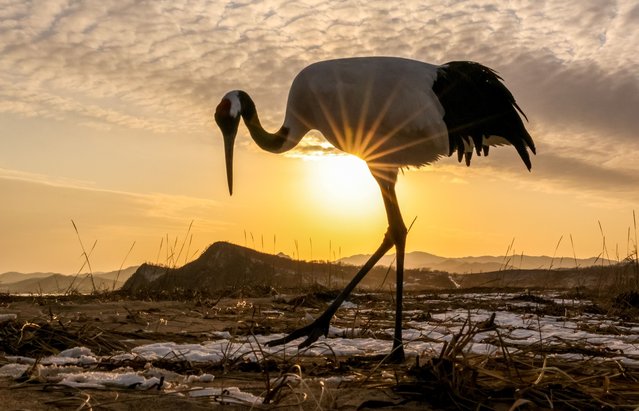 A red-crowned crane walks on a sandy beach by the Boismana Bay in Primorye Territory, Russia on December 20, 2021. The crane was supposed to migrate with other birds in late autumn, but for reasons unknown it remained on the beach by the Boismana Bay where it has been wandering in search of food for almost a month now. Red-crowned cranes are described as being vulnerable on the IUCN Red List of Threatened Species. (Photo by Yuri Smityuk/TASS) 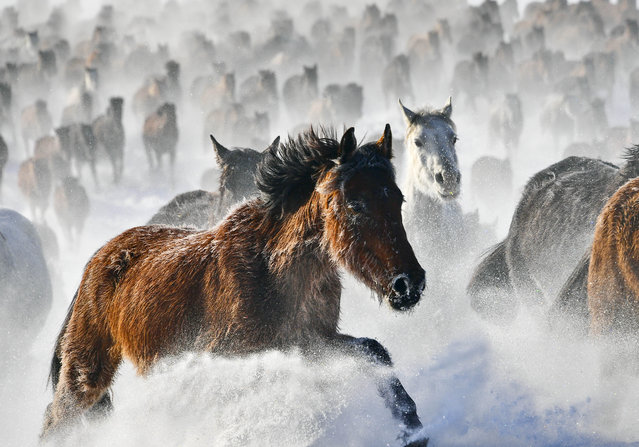 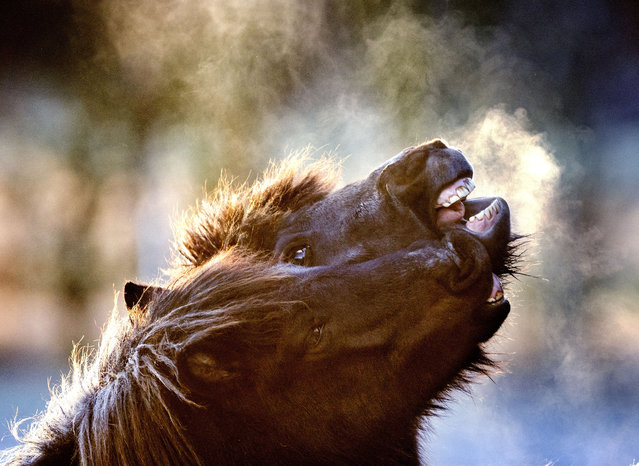