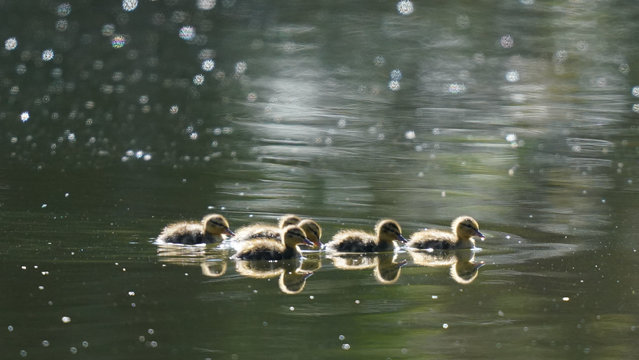 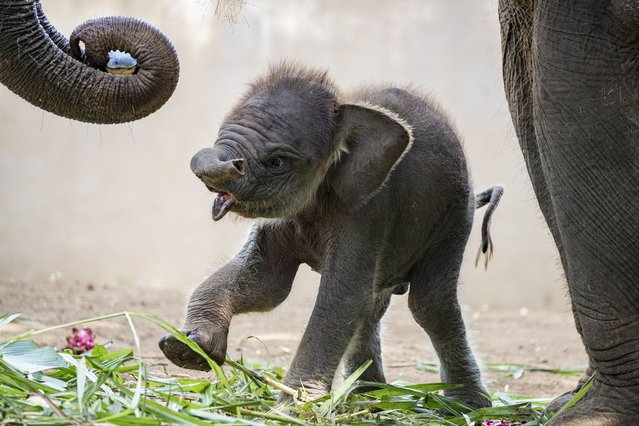 A month-old male Sumatran elephant named “Lanang” plays with his mother at Bali Zoo in Gianyar, Bali, Indonesia, 14 April 2022. Lanang is the first Sumatran elephant born in Bali Zoo. (Photo by Made Nagi/EPA/EFE) 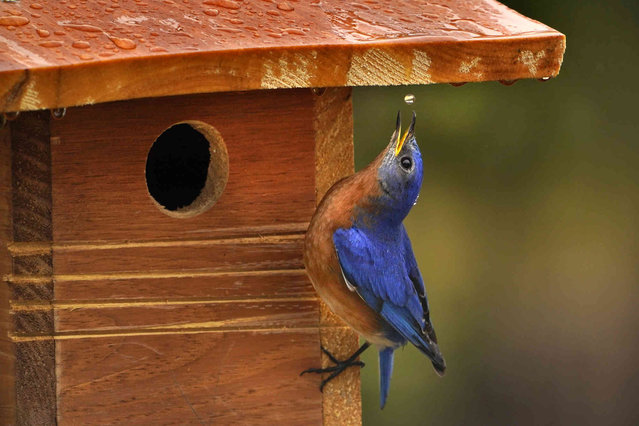 An eastern bluebird catches a drop of water as it falls from the roof of a nesting box on a rainy day, Tuesday, April 12, 2022, in Freeport, Maine. (Photo by Robert F. Bukaty/AP Photo) 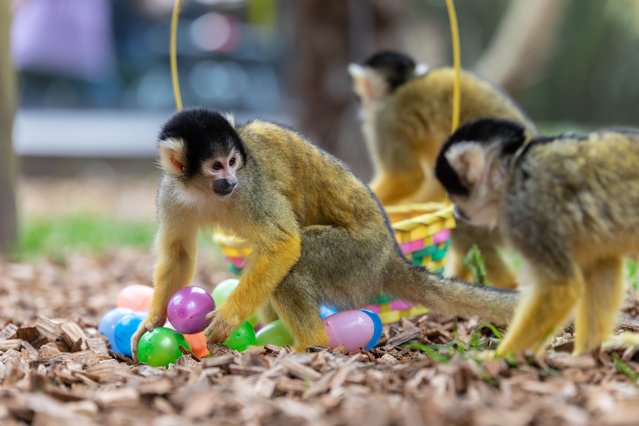 Bolivian squirrel monkeys enjoy some Easter enrichment at the Chessington World of Adventures Zoo on April 14, 2022. With families across the UK making the most of the long Easter bank holiday weekend, and millions tucking into their Easter eggs, the expert zoo team at Chessington World of Adventures Zoo are making sure the animals don'tfeel left out and have been coming up with some egg-cellent enrichment for the Resort's inhabitants. (Photo by Mark Field/PinPep/Rex Features/Shutterstock) 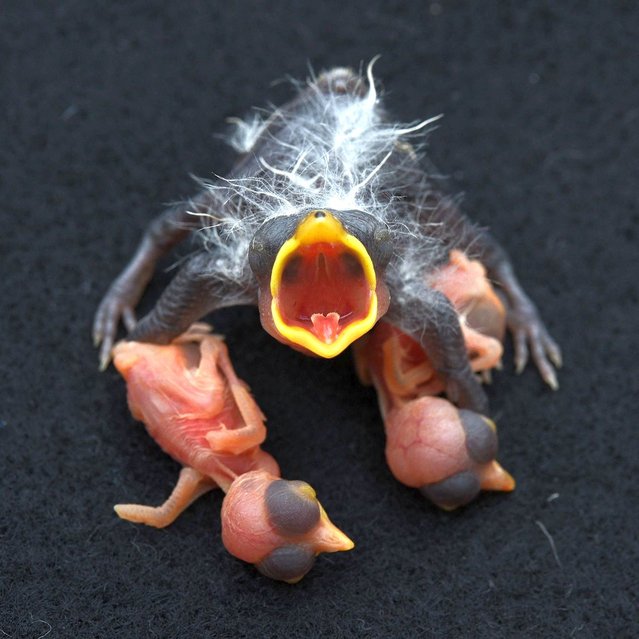 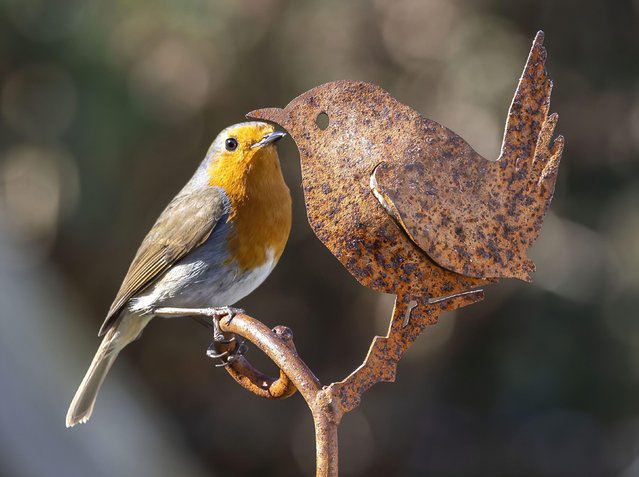 A robin finds some company in the shape of a metal wren in a garden in Oban, Argyll in Scotland on April 14, 2022. (Photo by Stephen Lawson/Solent News) 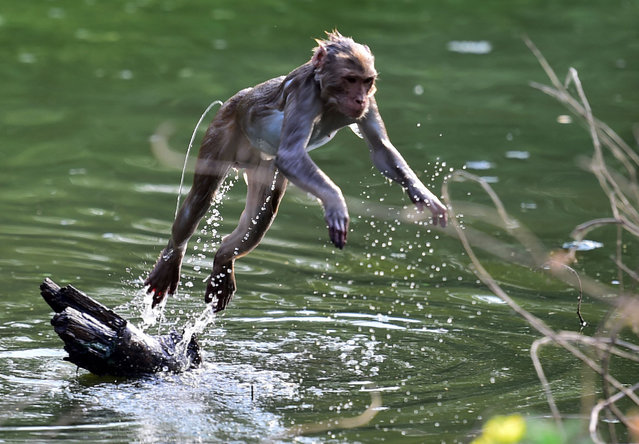 A monkey leaps in a pond during a hot summer day in Allahabad, India on April 12, 2022. (Photo by Sanjay Kanojia/AFP Photo) 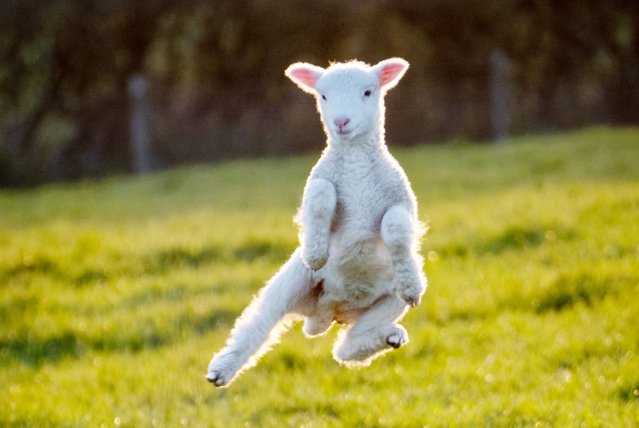 This is the moment a lamb appears to be doing kung fu as it plays with its friends in a field overlooking Kimmeridge Bay in Dorset on April 11, 2022. (Photo by Donna White/Bournemouth News) 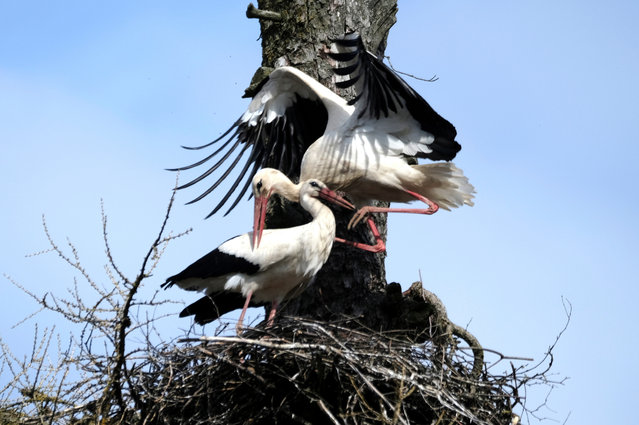 White storks in a nest at the white storks colony in Vecate, Latvia, 18 April 2022. This is the unique colony of white storks, where the storks form their nests on the larch. About 4% of the world's white storks or about 10,000 couple make their nests in Latvia each year, that is why Latvia is also called the land of storks. The large population of stork is regarded as a indicator that the environment here is less polluted than elsewhere. (Photo by Valda Kalnina/EPA/EFE)

A Malayan night heron nestling is seen in its nest at a park in Taipei on April 13, 2022. (Photo by Sam Yeh/AFP)

An angry looking buzzard stomps its way towards photographer Jayne Bond in Rhayader, Wales on April 8, 2022. The bolshy bird had its feathers ruffled when it was repeatedly disturbed while settling down to its supper. (Photo by Jayne Bond/Animal News Agency) 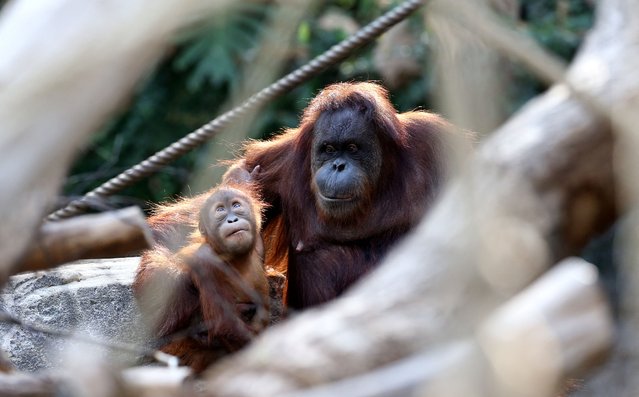 Orang-utan Bella, the world's oldest according to the Hamburg zoo, rests on her 61st birthday beside Berani at the Hagenbeck zoo in Hamburg, Germany, April 19, 2022. (Photo by Cathrin Mueller/Reuters) 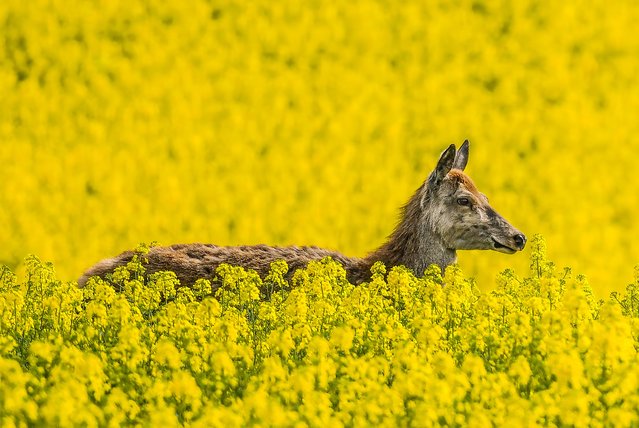 Pictured is a red deer in a rapeseed field in full bloom at Enford on Salisbury Plain, Wiltshire on Sunday morning, April 17, 2022. (Photo by Alan Benson/pictureexclusive.com) 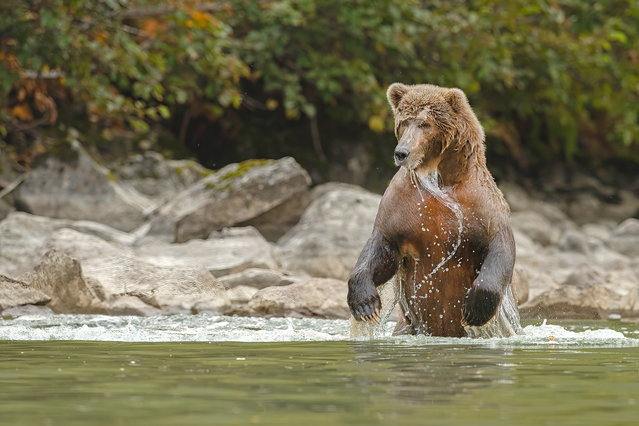 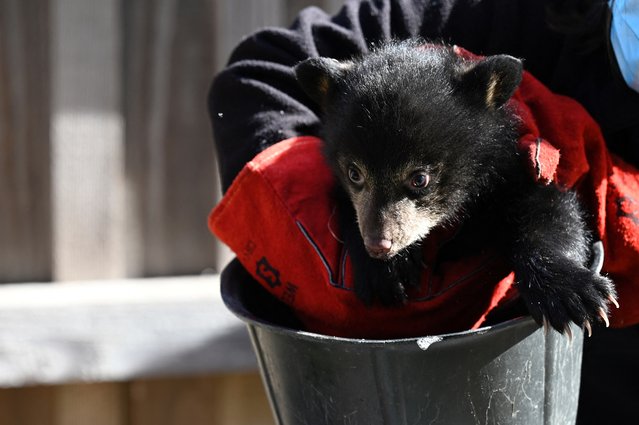 One of the two female black bears born on February 4 undergoes its first medical examination at Sainte-Croix animal park in Rhodes, eastern France on April 12, 2022. (Photo by Jean-Christophe Verhaegen/AFP Photo) 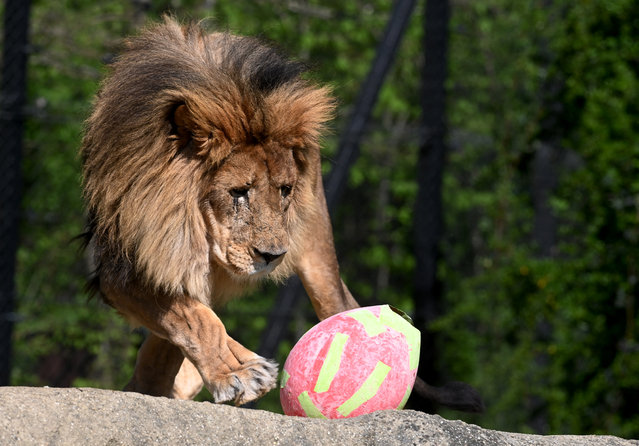 A lion looks at a large Easter egg containing treats at the zoo in Zagreb, on April 18, 2022. On the occasion of Easter Monday, the Zoo management decided to honor the animals with their favorite treats. (Photo by Denis Lovrovic/AFP Photo) 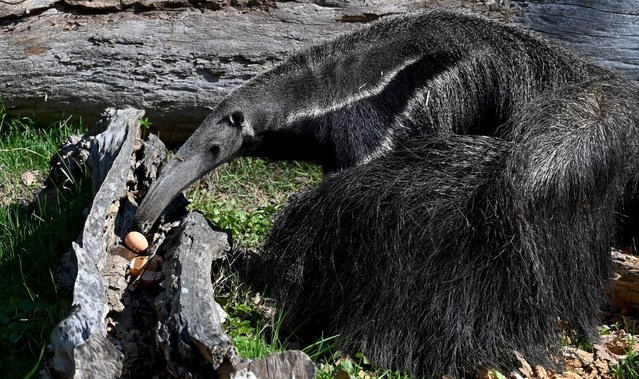 An anteater eats an Easter egg containing treats at the zoo in Zagreb, on April 18, 2022. (Photo by Denis Lovrovic/AFP Photo) 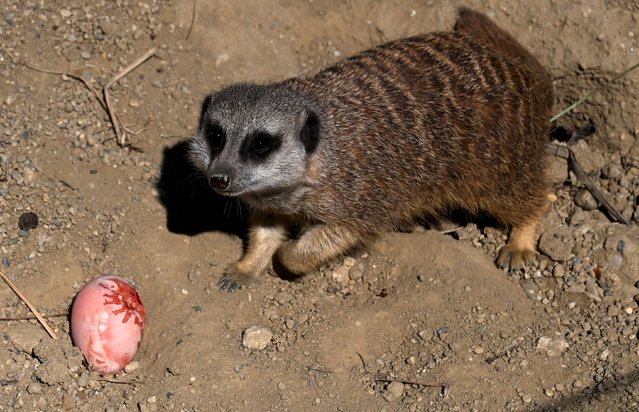 A meerkat looks at an Easter egg containing treats at the zoo in Zagreb, on April 18, 2022. (Photo by Denis Lovrovic/AFP Photo) 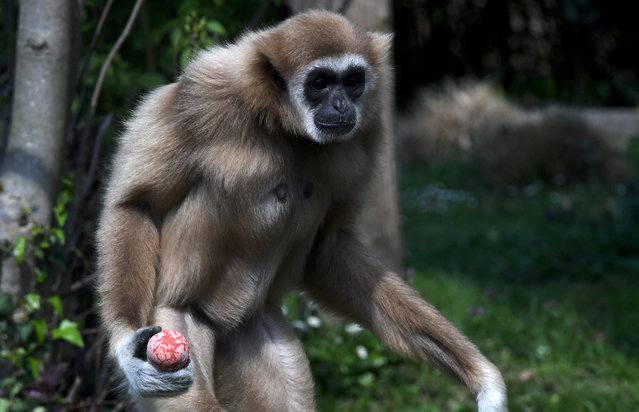 A white gibbon holds an Easter egg containing treats at the zoo in Zagreb, on April 18, 2022. (Photo by Denis Lovrovic/AFP Photo) 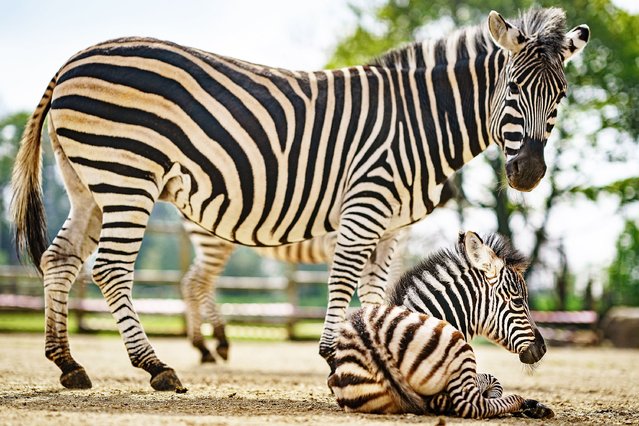