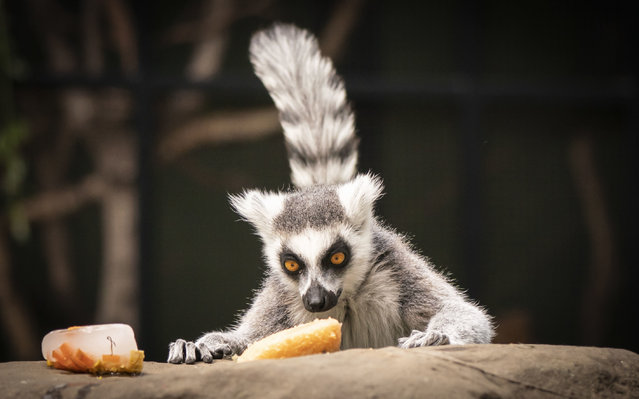 A ring-tailed lemur cools down by eating specially prepared animal friendly “ice lollypops” at the Yorkshire Wildlife Park in Doncaster, England, Friday June 17, 2022. A blanket of hot air stretching from the Mediterranean to the North Sea is giving much of western Europe its first heat wave of the summer, with temperatures forecast to top 30 degrees Celsius (86 degrees Fahrenheit) from Malaga to London on Friday. (Photo by Danny Lawson/PA Wire via AP Photo) 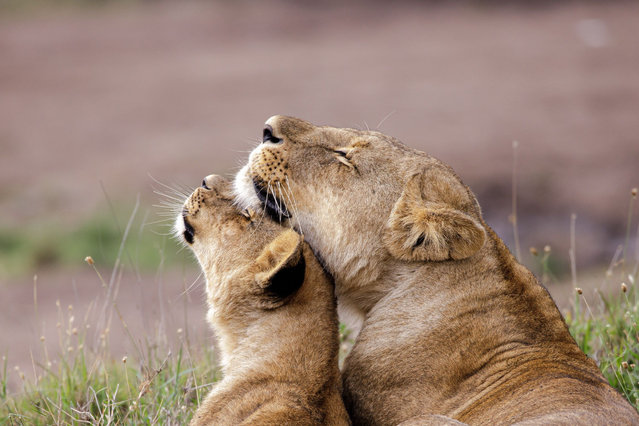 A lion cub and its mother cuddle at the Nairobi National park on June 3, 2022. The Nairobi National Park is the Worldís only Wildlife Capital. It is approximately 12km from the Nairobiís central business district. The Nairobi National Park has a wide open grass plains and backdrop of the city scrapes, scattered acacia bush that plays a host to a wide variety of wildlife including the endangered black rhino, lions, leopards, cheetahs, hyenas, buffaloes, giraffes and diverse birdlife with over 400 species recorded. (Photo byBoniface Muthoni/SOPA Images/Rex Features/Shutterstock) 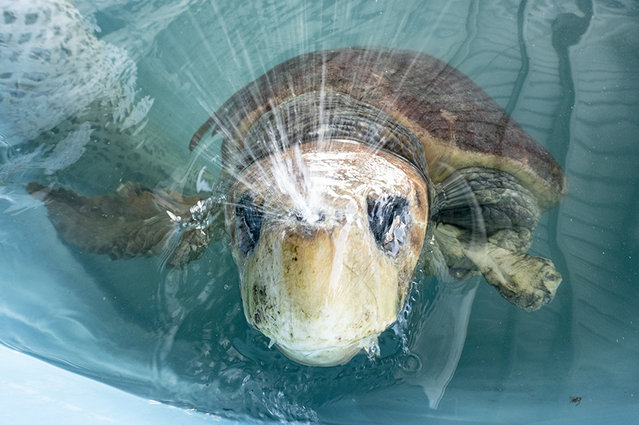 A female loggerhead turtle clears her nostrils after surfacing for air in her treatment tank on May 28, 2022 after she was brought to Miami Zoo’s new Sea Turtle Hospital in Miami. The turtle was rescued from the Port St. Lucie Power Plant after a shark attack left its left fin with exposed bone. (Photo by Ron Magill/Zoo Miami via AP Photo) 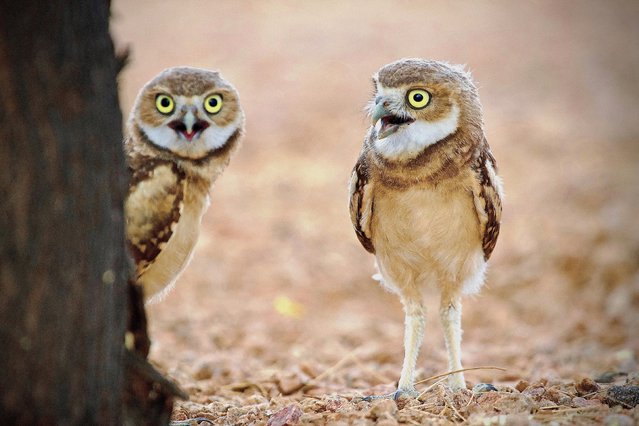 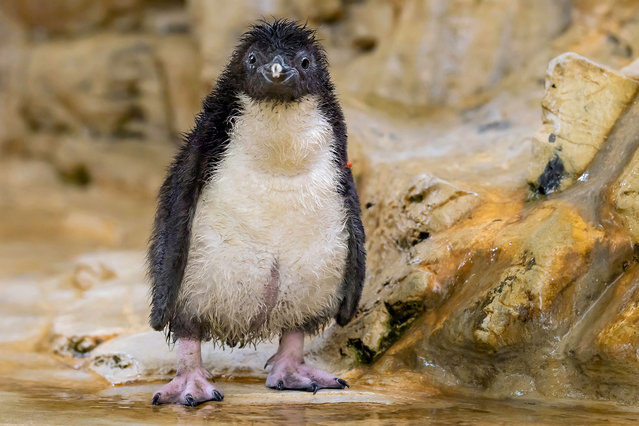 A Southern Rockhopper penguin with a young chick at the Vienna Zoo in Austria on June 6, 2022. (Photo by Daniel Zupanc/Newsflash) 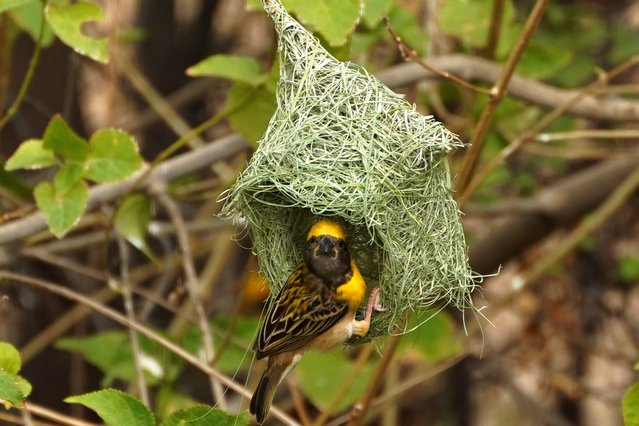 A Baya Weaver (Ploceus Philippinus) builds its nest during arrival of the monsoon on the outskirts of Ajmer in the Indian state of Rajasthan on 07 June 2022. (Photo by Himanshu Sharma/NurPhoto via Getty Images) 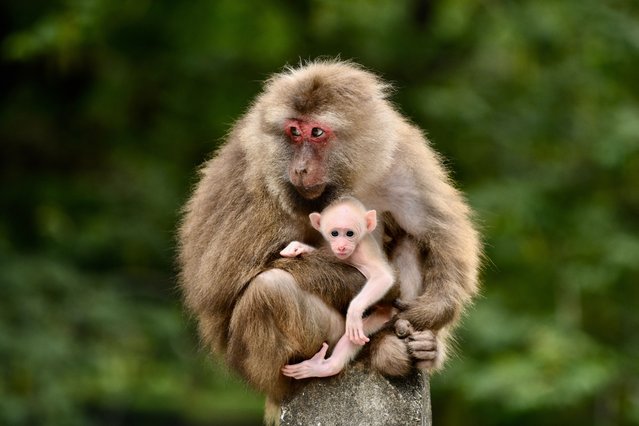 Macaques are seen in Mount Wuyi in southeast China's Fujian Province, May 16, 2021. Mount Wuyi, located in China's southeast province of Fujian, is a landscape of great beauty, in which the peaks and rocks of grotesque shapes are girded by clear streams and embraced by green trees and bamboo plants. Acting as a habitat for a large number of wildlife, it is of enormous importance for biodiversity conservation. There are a series of exceptional archaeological sites at Mount Wuyi, including the remains of ancient Han Dynasty (202 BC-220 AD) and a number of temples and ancient Confucian academies. With its natural and cultural values well interconnected, Mount Wuyi was inscribed on the UNESCO World Cultural and Natural Heritage List in 1999. (Photo by Xinhua News Agency/Rex Features/Shutterstock) 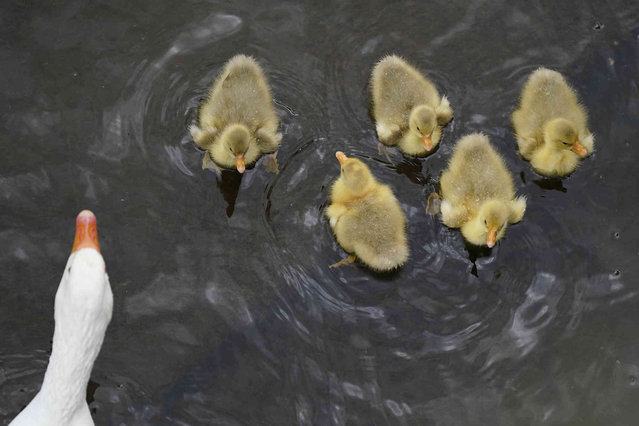 A geese and goslings swim in the river Avon in Stratford-upon-Avon, Warwickshire, England, Monday June 13, 2022. (Photo by Jacob King/PA Wire via AP Photo) 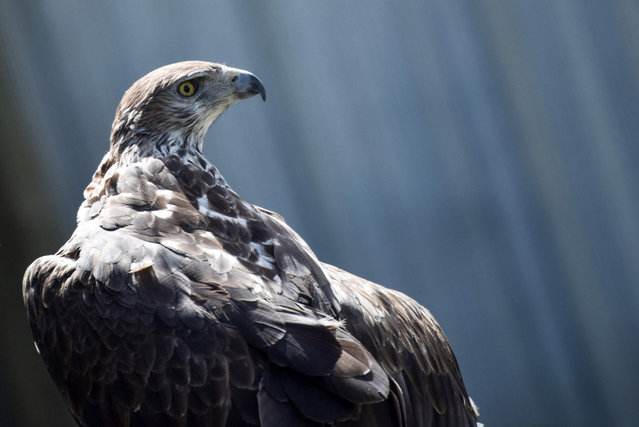 This photograph taken on June 9, 2022 shows a Bonelli's eagle in the breeding center in Saint-Denis du Payre, western France. For an endangered species that breeds “rarely in captivity”, this is a new feat: five young Bonelli's eagles born in a breeding farm in Vendee will join Spain this summer to be released. (Photo by Sebastien Salom-Gomis/AFP Photo) 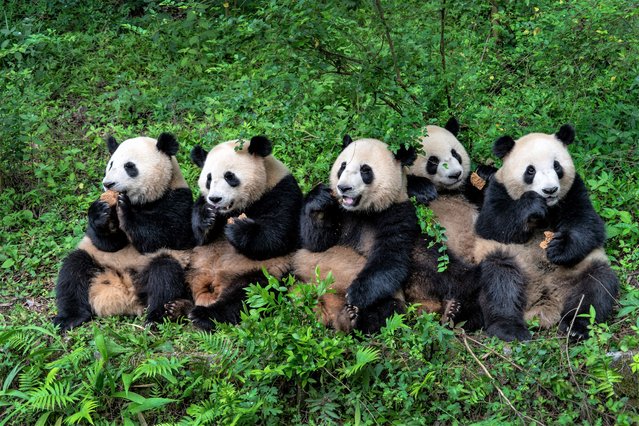 Giant pandas are seen at Chengdu Research Base of Giant Panda Breeding on June 13, 2022 in Chengdu, Sichuan Province of China. (Photo by Xu Jun/VCG via Getty Images) 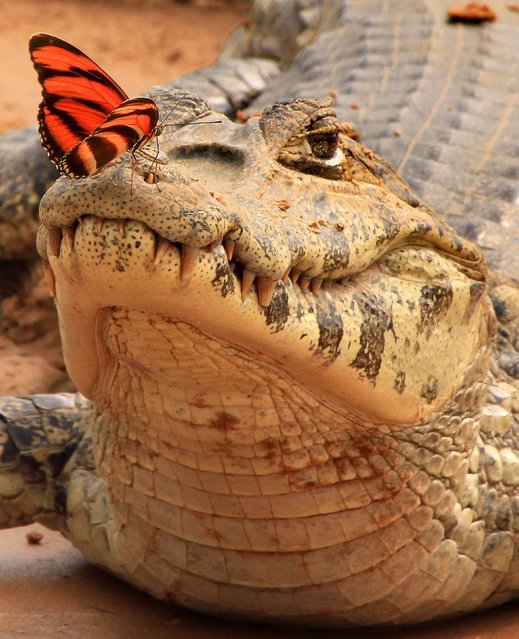 A bright orange butterfly goes eye to eye with a caiman as it lands on its snout in Waters State Park, Northern Pantanal, Brazil on June 10, 2022. (Photo by Paulo Barreiros/Solent News & Photo Agency) 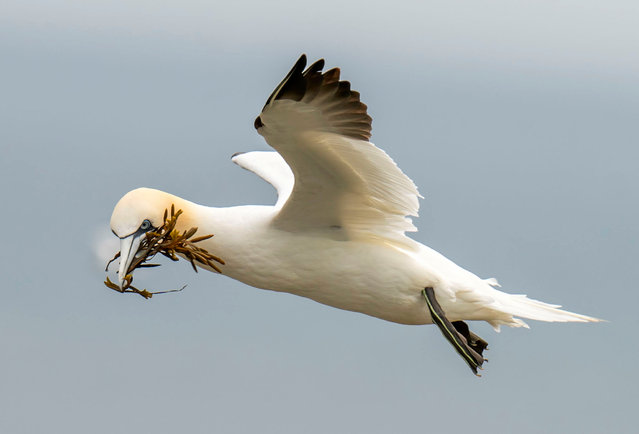 A gannet gathers nesting material at Bempton Cliffs in Yorkshire on Monday June 6, 2022, as over 250,000 seabirds flock to the chalk cliffs to find a mate and raise their young. From April to August the cliffs come alive with nest-building adults and young chicks. (Photo by Danny Lawson/PA Images via Getty Images) 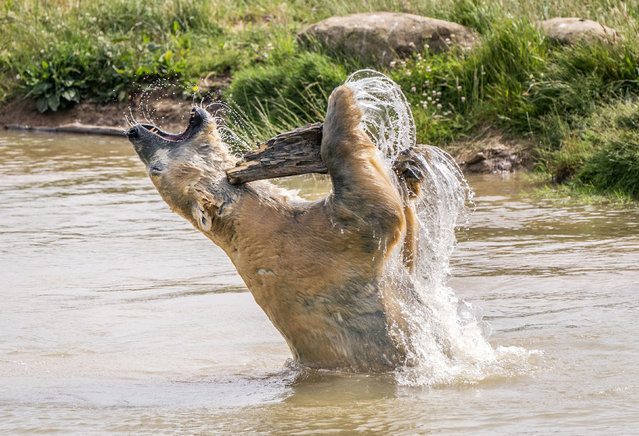 Nobby the polar bear cools down as he plays in a lake at the Yorkshire Wildlife Park in Doncaster, England, Friday June 17, 2022. A blanket of hot air stretching from the Mediterranean to the North Sea is giving much of western Europe its first heat wave of the summer, with temperatures forecast to top 30 degrees Celsius (86 degrees Fahrenheit) from Malaga to London on Friday. (Photo by Danny Lawson/PA Wire via AP Photo) 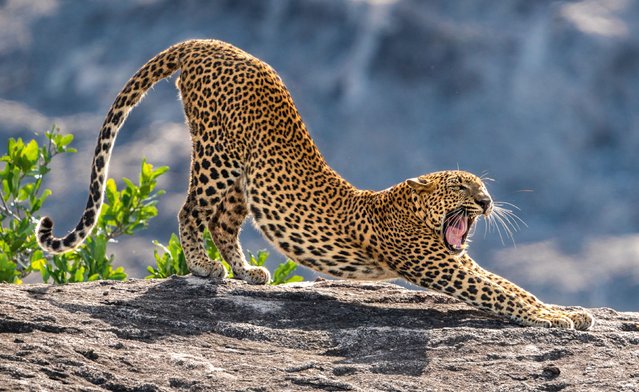 A leopard stretches in a yoga pose after waking from a doze in the sunshine at the Sri Lanka's Yala National Park, on the southeastern coast of the island on June 13, 2022. (Photo by Sergey Savvi/Solent News & Photo Agency) 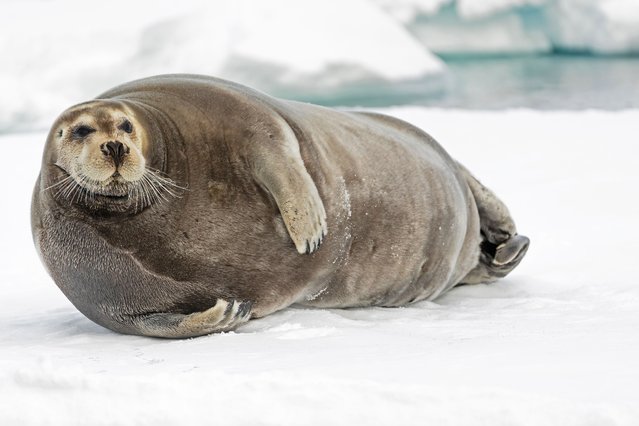 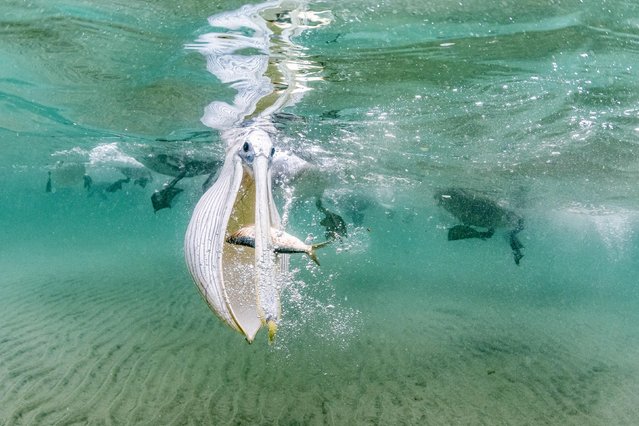 A hungry pelican scoops up an unlucky sardine in Baja Magdalena, off the coast of western Mexico on June 16, 2022. (Photo by Franco Banfi/Blue Planet Arc/Solent News) 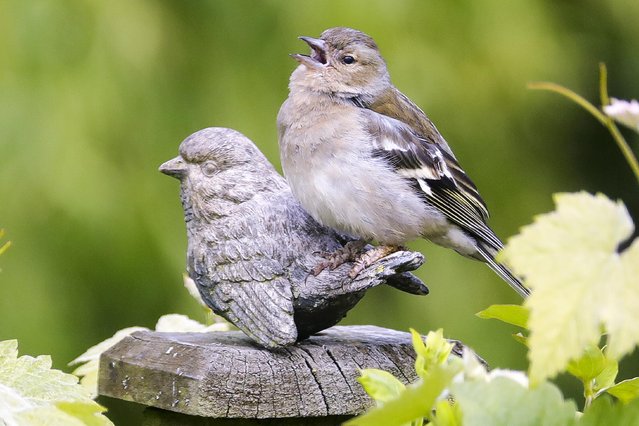 A wooden garden ornament proved too much for a chaffinch to resist in Cinderford, Gloucestershire on June 15, 2022. (Photo by Ray Buckley/Solent News) 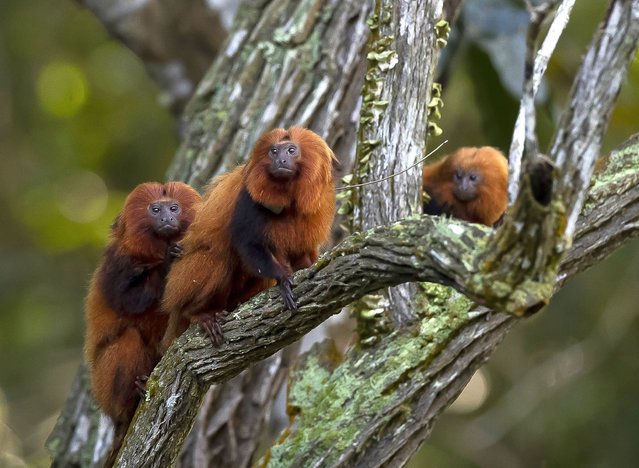 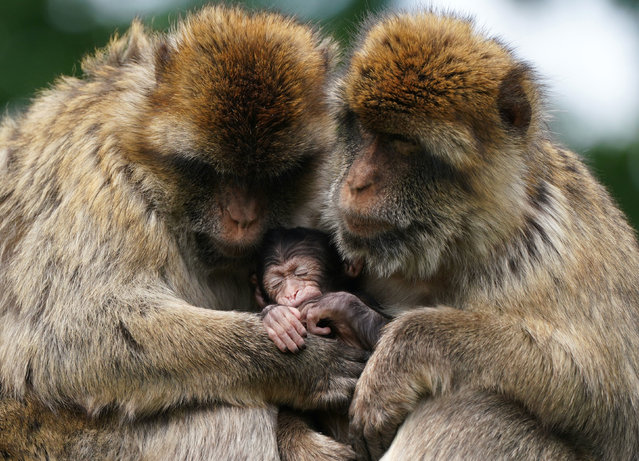 A baby macaque, named Fia by her keepers, with its mother Liberty and father Phil at Blair Drummond Safari and Adventure Park, near Stirling on Friday, June 17, 2022. The four-week-old baby girl was born to mother Liberty and father Phil on the 25th May and is proving to be a popular addition to the macaque troop. (Photo by Andrew Milligan/PA Wire) 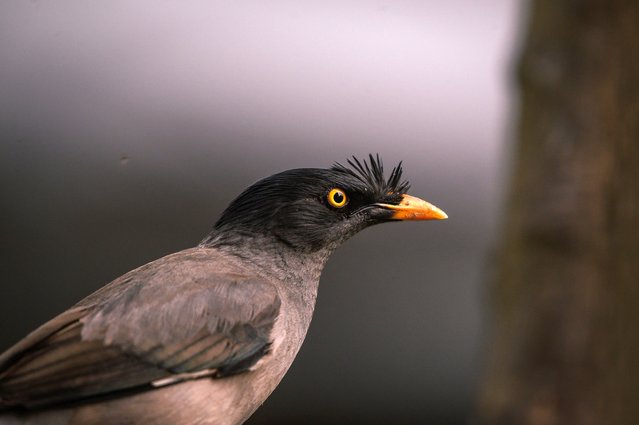