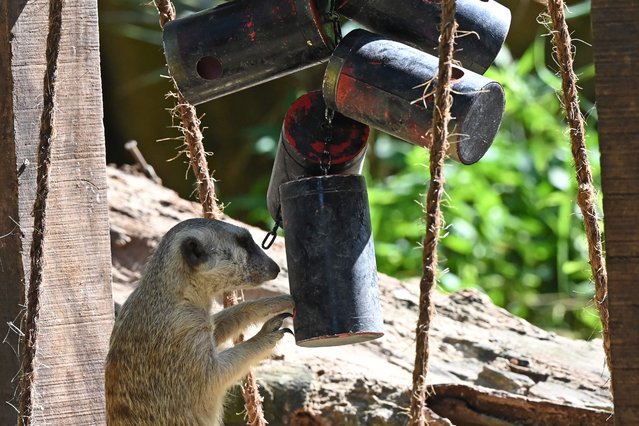 A meerkat is seen inside its exhibit at the Singapore Zoo in Singapore on October 26, 2021. (Photo by Roslan Rahman/AFP Photo) 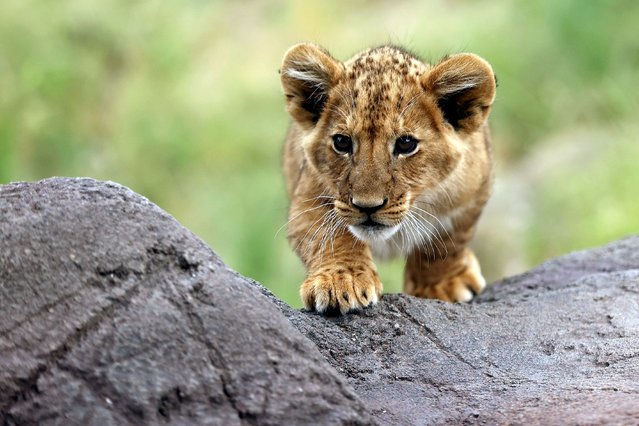 A lion cub explores the African Savannah enclosure at Taronga Zoo on November 04, 2021 in Sydney, Australia. Five lion cubs to mother “Maya” and father “Ato” make their debut to the public at twelve weeks old at Taronga Zoo. The lion cubs have been named by zoo supporters, the public and the zoo's carnivore keepers Khari, Luzuko, Malika, Zuri and Ayanna. (Photo by Cameron Spencer/Getty Images) 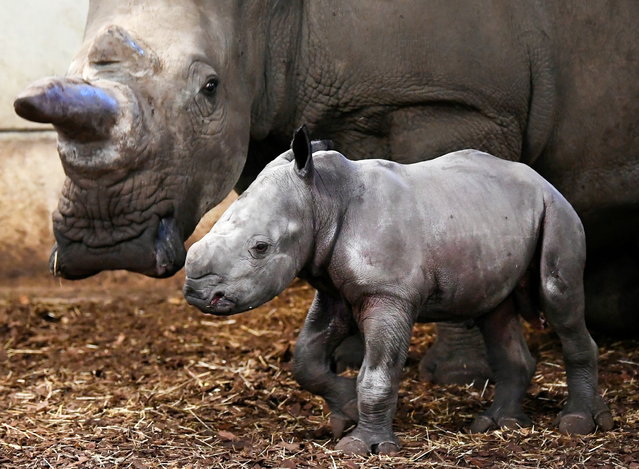 A newly-born white rhinoceros is pictured at the Royal Burgers' Zoo in Arnhem, Netherlands on October 28, 2021. (Photo by Piroschka van de Wouw/Reuters) 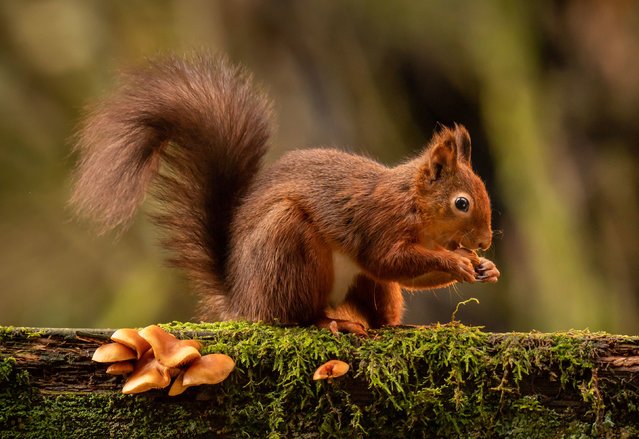 A red squirrel forages for food ahead of winter in the Widdale Red Squirrel Reserve in the Yorkshire Dales National Park, United Kingdom on Tuesday, November 2, 2021. (Photo by Danny Lawson/PA Images via Getty Images)

Giant panda Shuixiu's two babies are pictured at their room in Shenshuping base of China Conservation and Research Center for the Giant Panda on November 3, 2021 in Aba Tibetan and Qiang Autonomous Prefecture, Sichuan Province of China. (Photo by An Yuan/China News Service via Getty Images) 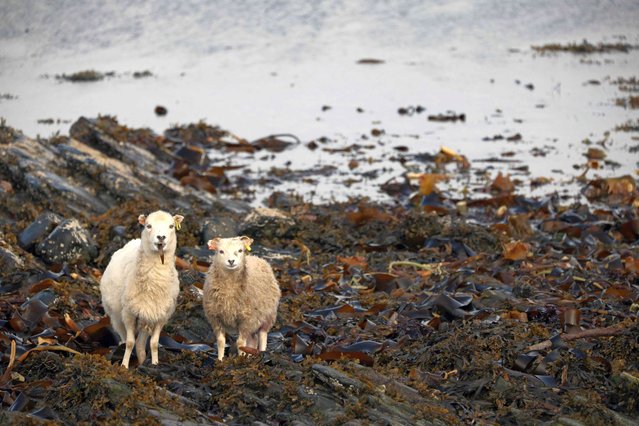 Sheep graze on the beach eating seaweed at North Ronaldsay, Orkney on September 7, 2021. On a tiny island in Scotland's Orkneys, thousands of sheep happily munch on seaweed all winter, a unique diet that scientists say offers hope for reducing planet-warming methane emissions. The distinctive native sheep with brown, beige or black wool, learned to survive on the foreshore, eating the most commonly available food: seaweed. (Photo by Adrian Dennis/AFP Photo) 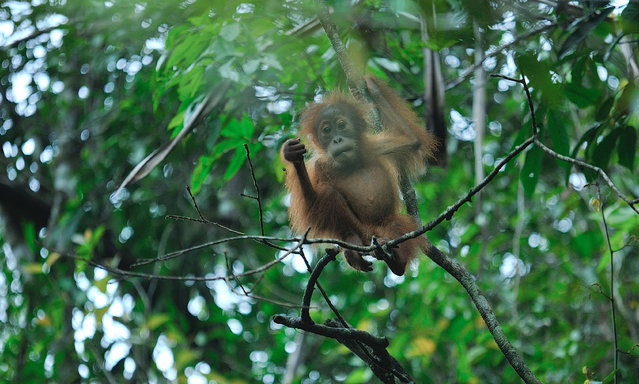 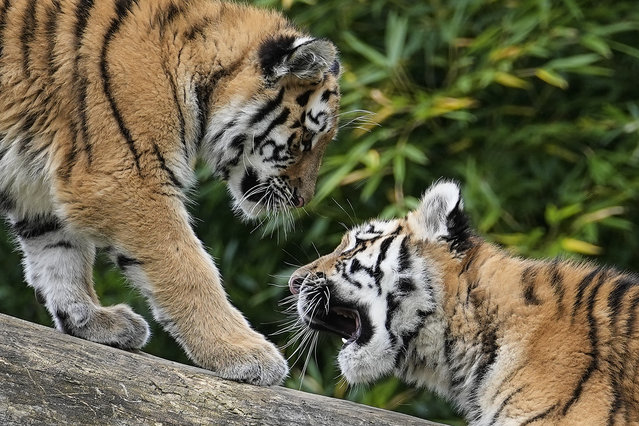 The little Siberian tigers Kasimir and Kalinka play on a tree trunk at the zoo in Duisburg, Germany, Monday, October 25, 2021. The young tiger twins were born in May and enjoy their first autumn at their close to nature enclosure at the zoo. (Photo by Martin Meissner/AP Photo) 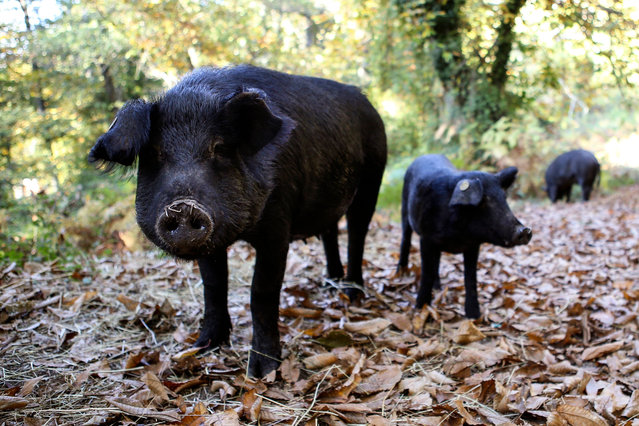 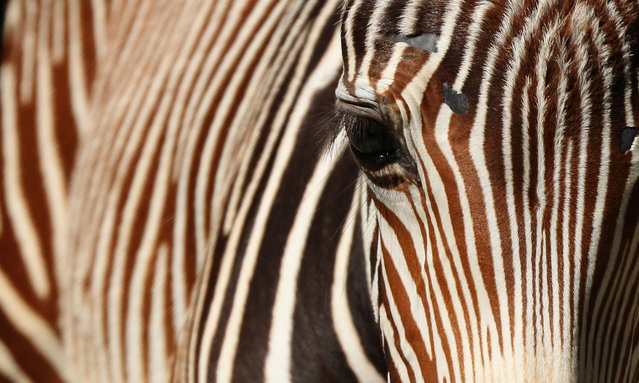 An endangered female Grevy's zebra foal named Izara, born in Singapore on September 30, 2021 walks in the exhibit at the Singapore Zoo on October 26, 2021 in Singapore. (Photo by Suhaimi Abdullah/NurPhoto/Rex Features/Shutterstock) 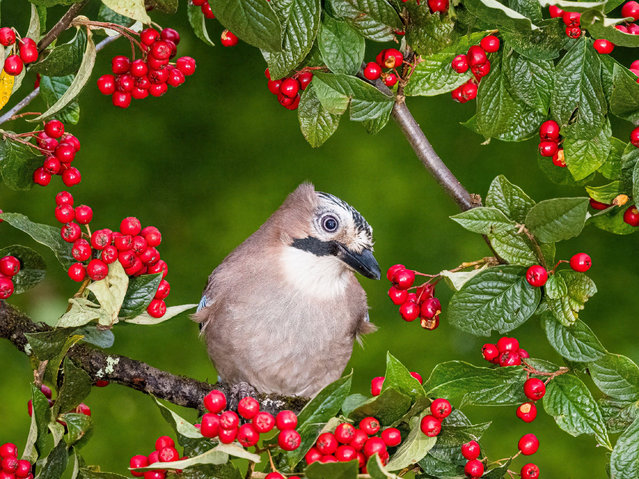 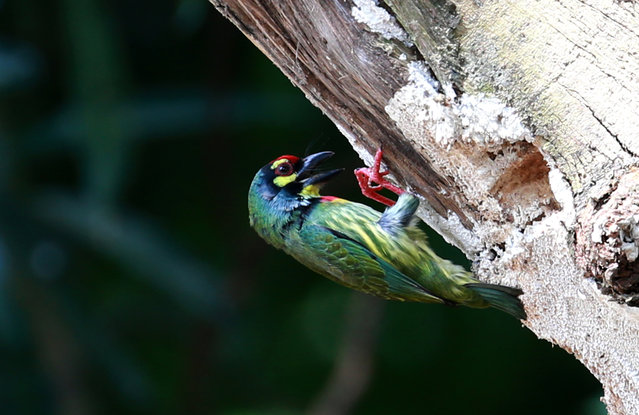 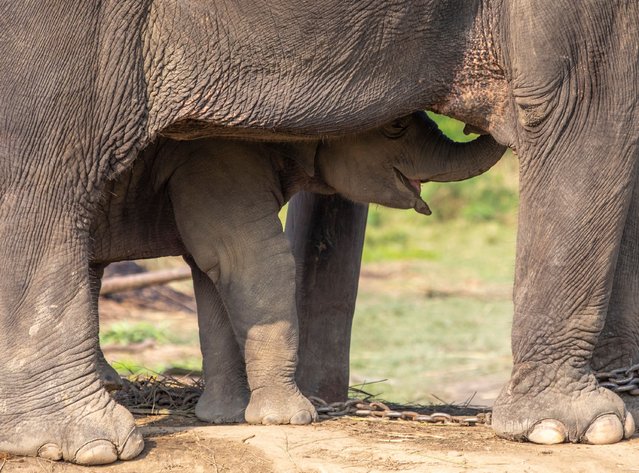 A six-months-old elephant calf drinks milk from its mother at an elephant breeding center in Chitwan, Nepal, 31 October 2021 (issued 02 November 2021). Chitwan is one of the major tourist destinations in Nepal and popular zone for wild life sightseeing in Chitwan National Park. (Photo by Narendra Shrestha/EPA/EFE) 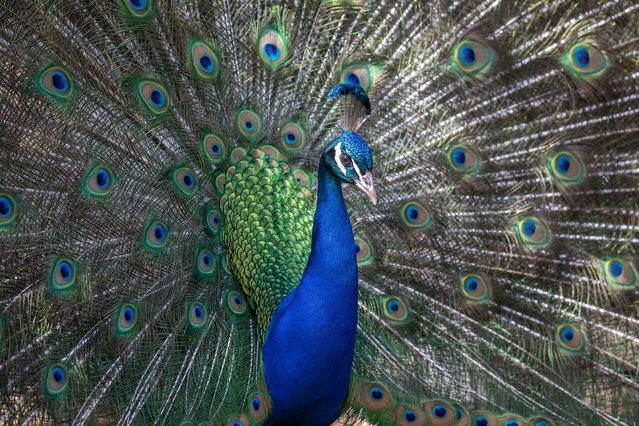 A peacock opens its plumage at Willowbank Wildlife Reserve in Christchurch, New Zealand on October 16, 2021. (Photo by Sanka Vidanagama/NurPhoto/Rex Features/Shutterstock) 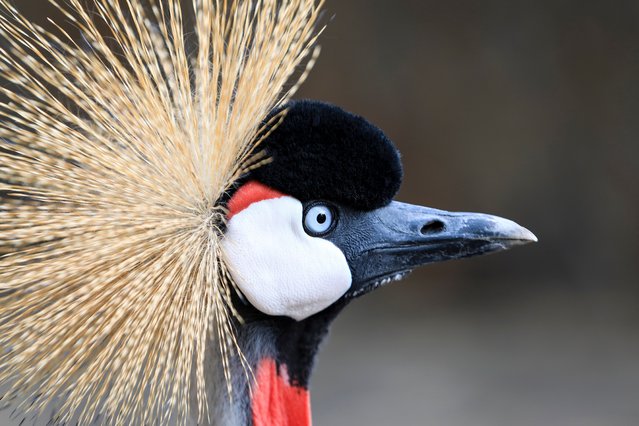 A Grey Crowned Crane bird walks on the shore of Lake Baringo in the Lake Baringo National Park, west-central Kenya, 21 October 2021. Flourished with flora and fauna, Kenya has over 1,000 species of birds, 261 mammals, and 6,500 species of plants. Wildlife plays a major role in Kenya's socioeconomic development, serving as one of the major drawing cards for the tourism which is Kenya's largest source of foreign currency revenue. (Photo by Daniel Irungu/EPA/EFE) 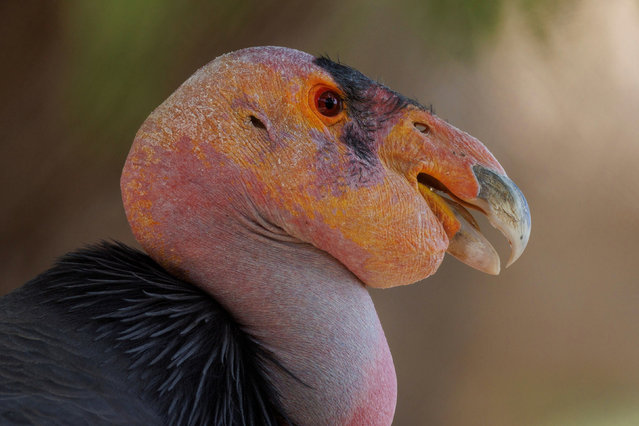 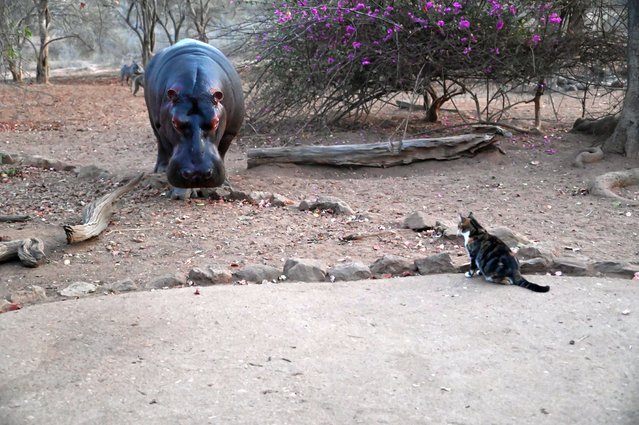 A wild hippo, nicknamed Steve, visits the Turgwe Hippo Trust headquarters in Chiredzi, Zimbabwe on September 19, 2021. The facility opened in 1992 to feed wild hippos and provide them with water during droughts. (Photo by Karen Paolillo/Rex Features/Shutterstock) 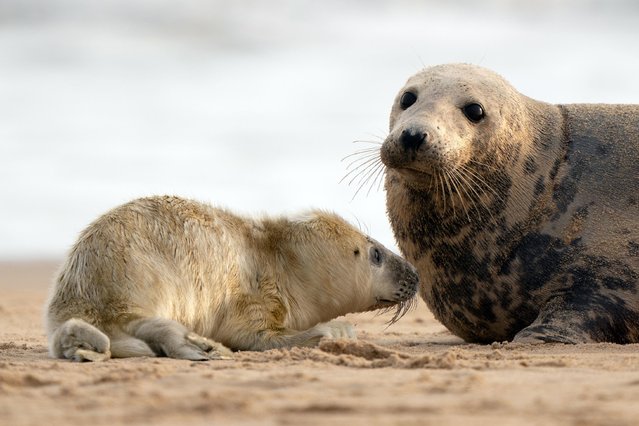 A grey seal with her newborn pup on the beach at Horsey in Norfolk on Friday October 29, 2021, as the pupping season begins at one the UK's most important sites for the mammals. (Photo by Joe Giddens/PA Images via Getty Images) 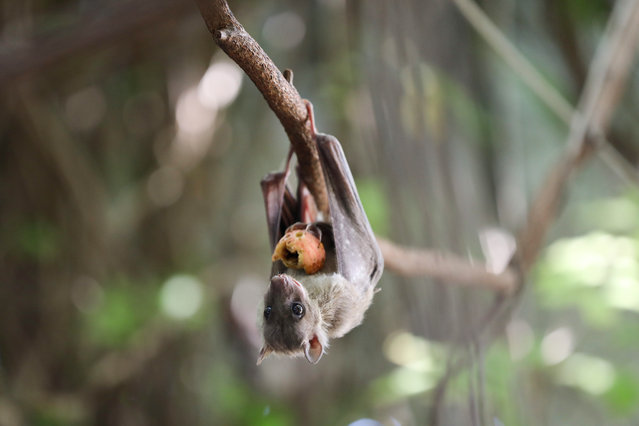 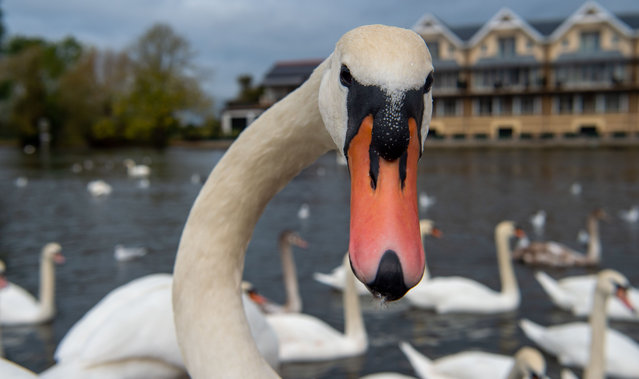 The flock of swans on the River Thames in Windsor, UK were very hungry as they scrabbled to get scraps of bread from locals feeding them on October 27, 2021. Fortunately there are at least 20 new cygnets on this stretch of the River Thames. (Photo by Maureen McLean/Rex Features/Shutterstock)
Edit Del
07 Nov 2021 06:00:00, post received 0 comments
Publication archive:
←   →
Popular tags:
All tags
Last searches: