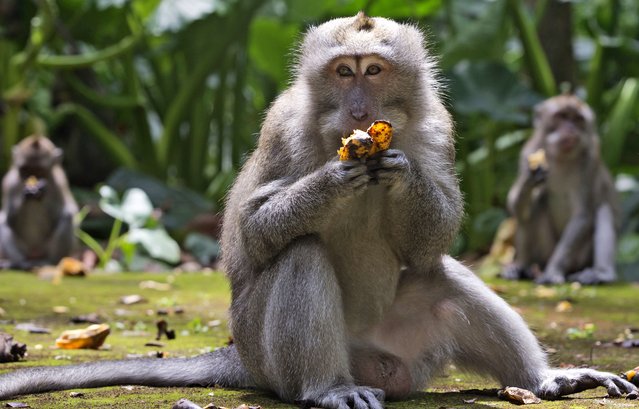 Macaques eat bananas during feeding time at Sangeh Monkey Forest in Sangeh, Bali Island, Indonesia, Wednesday, September 1, 2021. Deprived of their preferred food source – the bananas, peanuts and other goodies brought in by the tourists now kept away by the coronavirus – hungry monkeys on the resort island of Bali have taken to raiding villagers’ homes in the search for something tasty. (Photo by Firdia Lisnawati/AP Photo) 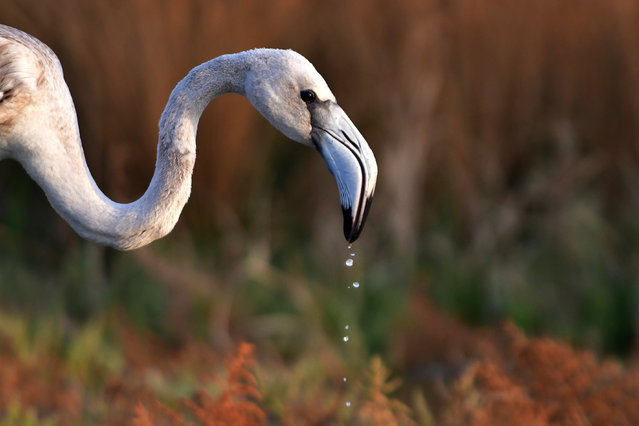 A flamingo searches for food in the wetland of Nea Kios, Greece, 21 September 2021. (Photo by Evangelos Bougiotis/EPA/EFE) 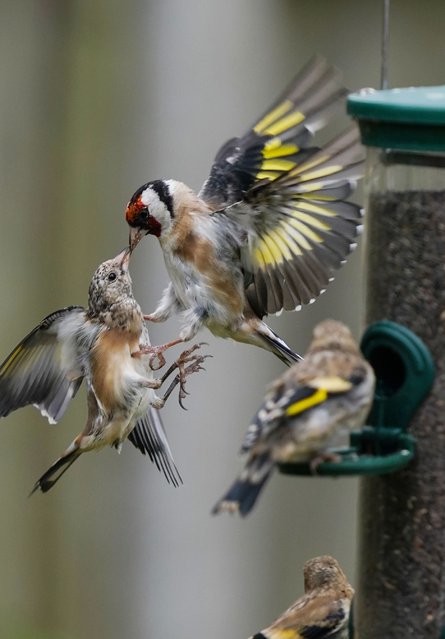 Goldfinches fighting over food in a garden in Strensham, Worcestershire, United Kingdom on Wednesday, September 1, 2021. (Photo by David Davies/PA Images via Getty Images) 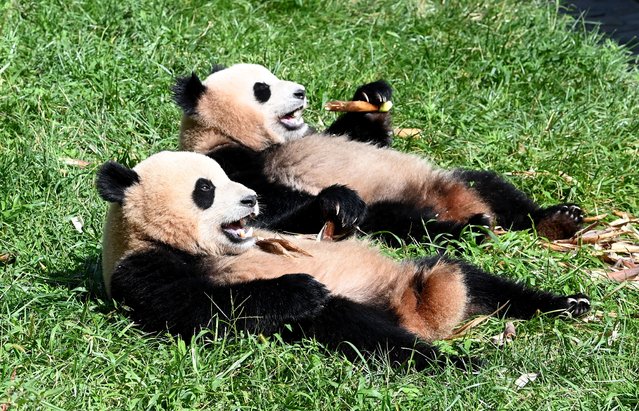 Giant pandas have fun during the early autumn at the Shenshuping Base of China Conservation and Research Center for Giant Panda on September 3, 2021 in Aba Tibetan and Qiang Autonomous Prefecture, Sichuan Province of China. (Photo by An Yuan/China News Service via Getty Images) 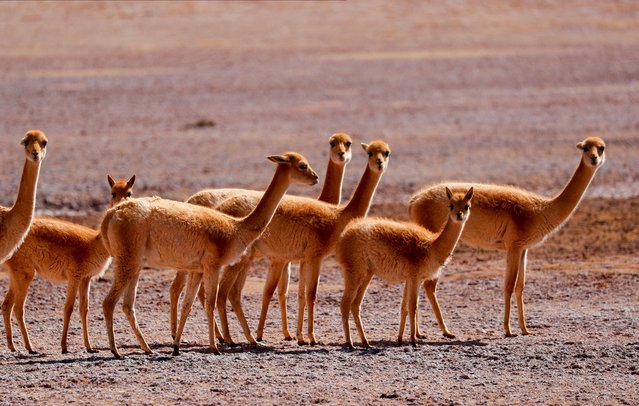 Vicunas are pictured near the Salar del Hombre Muerto, or Dead Man's Salt Flat, about 4,000 metres above sea level, in Salta, Argentina on August 13, 2021. (Photo by Agustin Marcarian/Reuters) 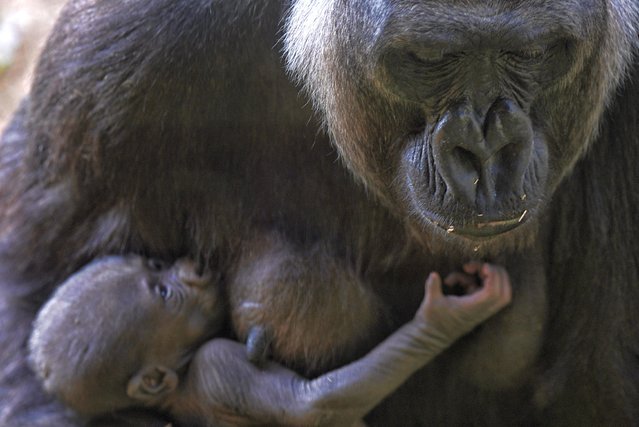 Western lowland gorilla Imbi and her baby gorilla are seen at the zoo in Belo Horizonte, Brazil, on September 24, 2021. The baby gorilla was born on September 3, 2021, and is the fifth of the species – which appears on the International Union for Conservation of Nature (IUCN) red list as critically endangered – to be born in the zoo, the only one in South America to succeed in breeding the species. (Photo by Douglas Magno/AFP Photo) 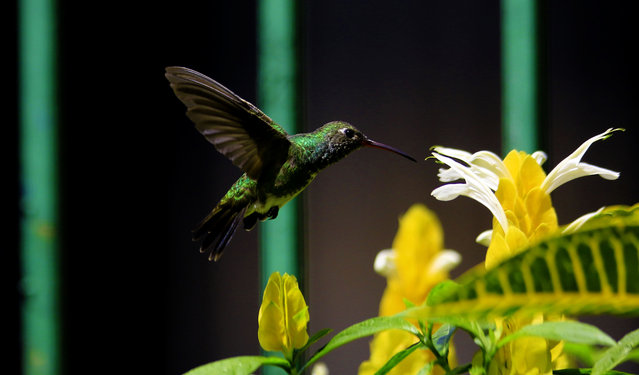 A black-chinned male hummingbird (Archilochus alexandri) hovers in the sky while feeding on the nectar of flowers in Carabobo state in Valencia, Venezuela on September 6, 2021. (Photo by Juan Carlos Hernandez/ZUMA Press Wire/Rex Features/Shutterstock) 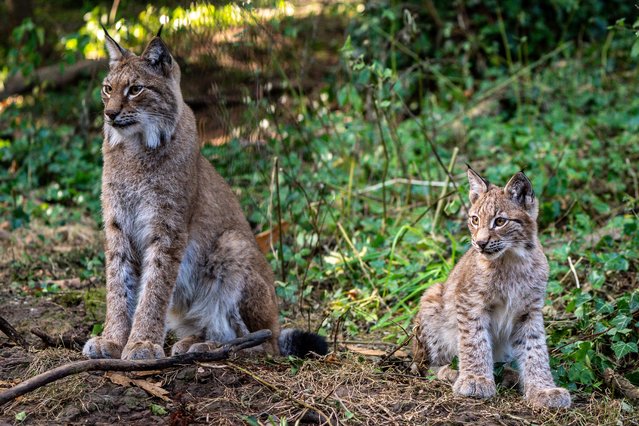 A four-month-old Lynx kitten sits beside mum as it explores its home in the Bear Wood exhibit at the Wild Place Project in Bristol, United Kingdom on Wednesday, September 22, 2021. (Photo by Ben Birchall/PA Images via Getty Images) 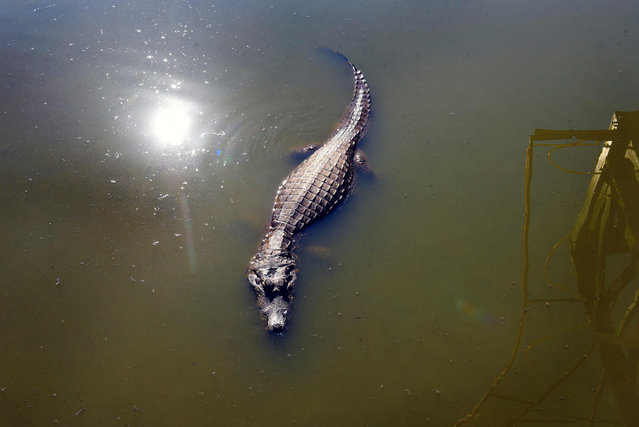 View of a yacare caiman (Caiman yacare) at a lagoon in the city of Ita, 36 km southeast from Asuncion, Paraguay on September 11, 2021. (Photo by Norberto Duarte/AFP Photo) 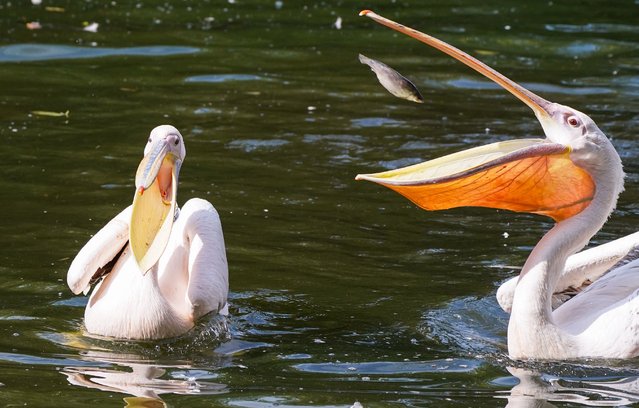 Keepers feed the pelicans in St Jame's Park, London on Monday, September 6, 2021. High temperatures and sunshine are predicted for the first week back at school for all pupils across the UK. (Photo by Ian West/PA Images via Getty Images) 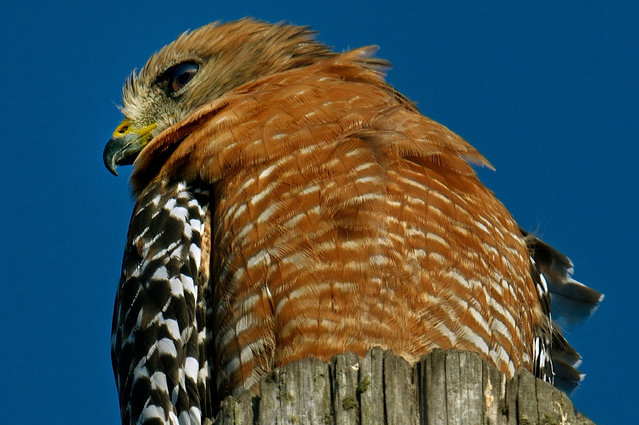 Red-shouldered Hawk keeps a watchful eye out for prey in California, US on September 21, 2021.Their hunting range spans Eastern North America and along the coast of California and Northern to Northeastern-central Mexico. It is a permanent resident throughout most of its range, though northern birds do migrate, mostly to central Mexico. (Photo by Rory Merry/ZUMA Press Wire/Rex Features/Shutterstock) 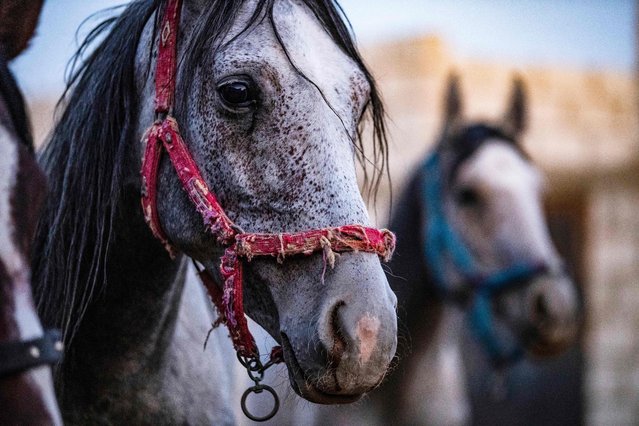 Horses are pictured at a farm for purebred Arabian horses in the countryside of Syria's northeastern city of Qamishli, on September 11, 2021. (Photo by Delil Souleiman/AFP Photo) 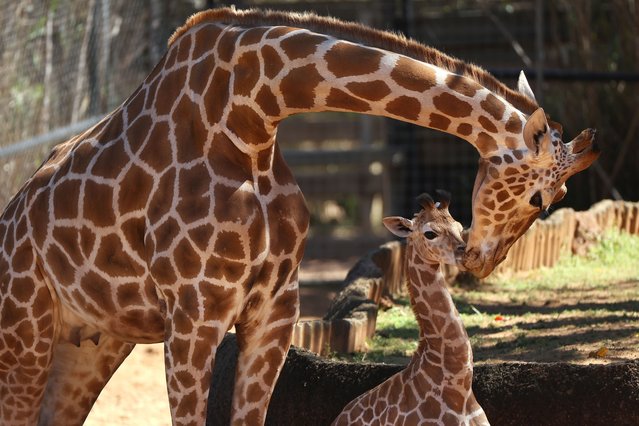 Perth Zoo's female giraffe Kitoto and her calf interact at Perth Zoo on September 23, 2021 in Perth, Australia. The unnamed female giraffe calf was born to mother Kitoto and father Armani as part of a regional breeding program to prevent the extinction of the species. Perth Zoo is holding a public naming competition to choose the name of the giraffe calf. (Photo by Paul Kane/Getty Images) 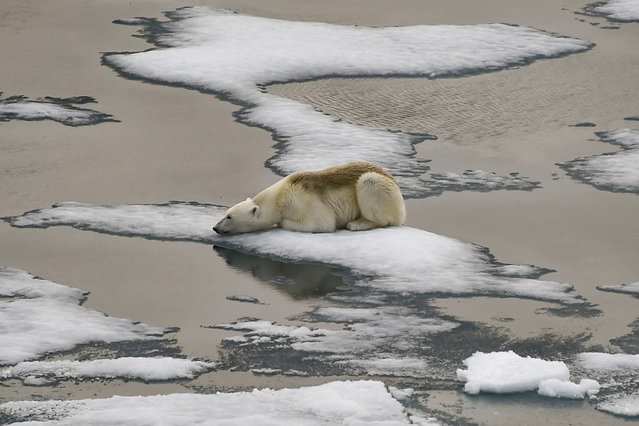 A polar bear is seen on ice floes in the British Channel in the Franz Josef Land archipelago on August 16, 2021. (Photo by Ekaterina Anisimova/AFP Photo) 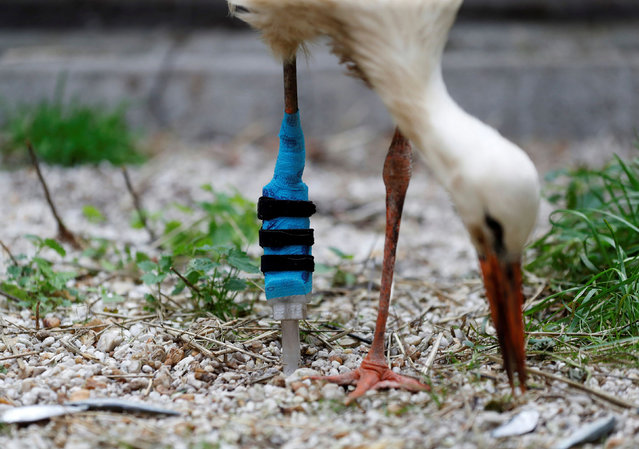 A one-legged stork rescued by an animal sanctuary eats fish with a new 3D-printed leg inside its enclosure near Frantiskovy Lazne, Czech Republic, September 1, 2021. (Photo by David W. Cerny/Reuters) 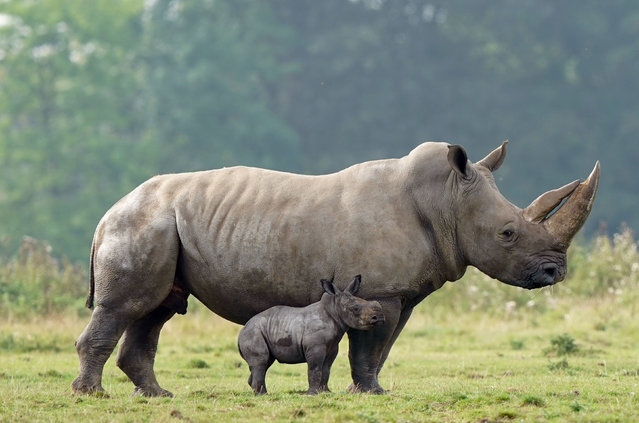 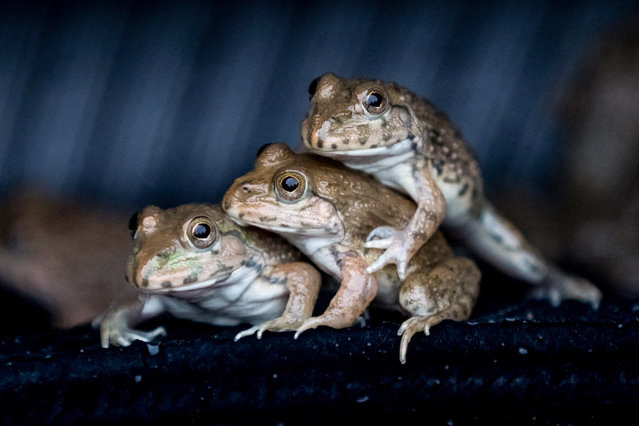 Frogs sit in a tyre within a makeshift farm on the bonnet of a taxi, one of many vehicles in a rental firm's lot that has sat out of service due to the downturn in business as a result of the Covid-19 coronavirus pandemic, in Bangkok on September 15, 2021. (Photo by Jack Taylor/AFP Photo) 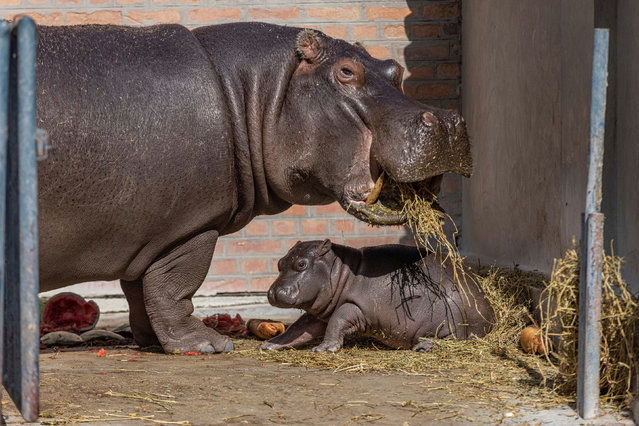 A baby hippo born on August 13 sits next to its mother Julka in their enclosure at Belgrade's Zoo, Serbia, September 9, 2021. (Photo by Marko Djurica/Reuters) 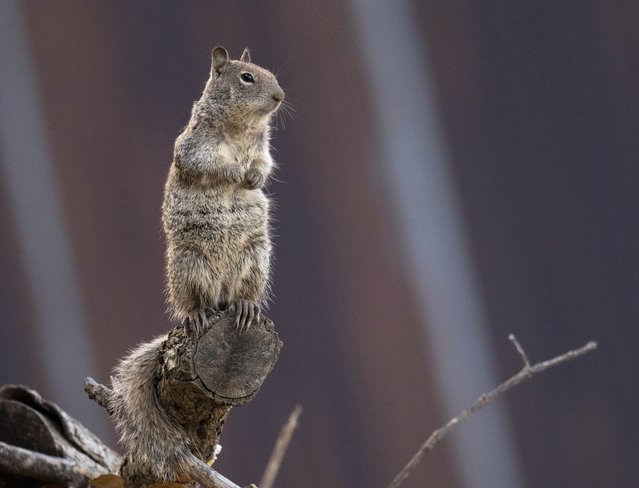 A ground squirrel keeps watch from its perch on a brush pile near a barn along a country road near Elkton in rural western Oregon on September 22, 2021. (Photo by Robin Loznak/ZUMA Press Wire/Rex Features/Shutterstock) 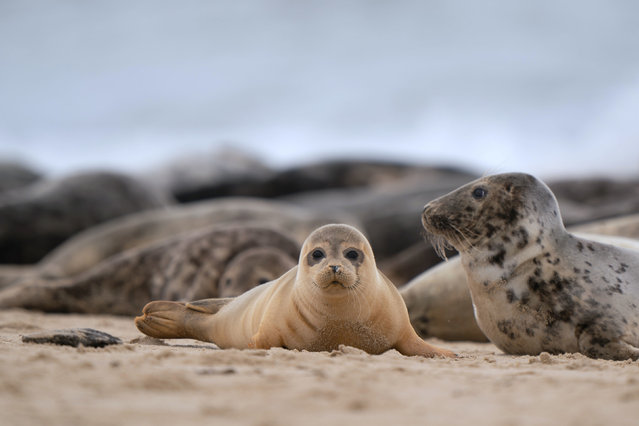 A common seal pup on the beach in Norfolk, United Kingdom on September 1, 2021, as hundreds of pregnant grey seals come ashore ready for the start of their pupping season. (Photo by Joe Giddens/PA Wire Press Association) 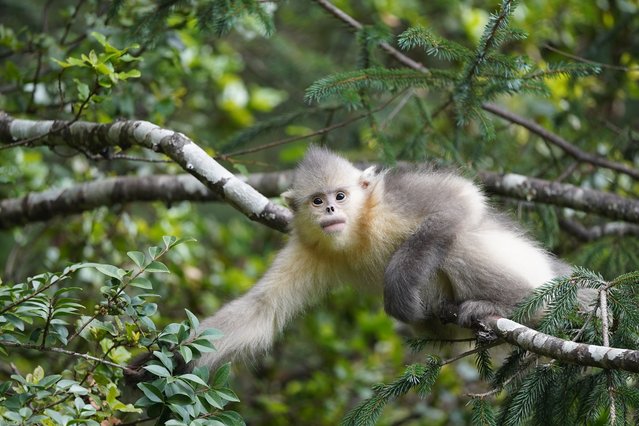 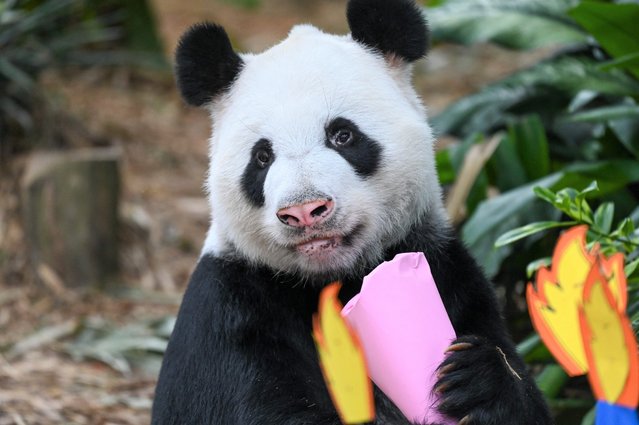