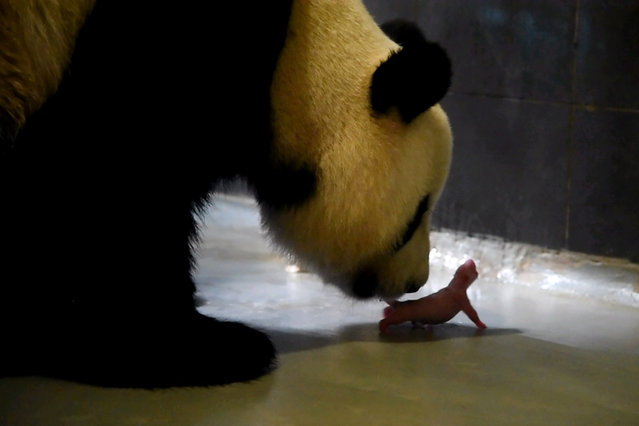 In this handout photo taken on June 26, 2016 and released by the Macau Government Information Bureau on June 27, giant panda Xin Xin cares for one of two newborn twin baby pandas at the Giant Panda Pavilion on Coloane, Macau. Giant panda Xin Xin gave birth to two male twin cubs on June 26 at the Giant Panda Pavilion in Coloane, according to officials. Xin Xin and her mate Kai Kai were a gift from the mainland to the gambling enclave in 2014, arriving in 2015. The larger cub weighed 138g (0.3 lb) and the smaller cub, weighing just 53.8g, was taken into intensive care. The panda pavilion has been closed since 14 June to prepare for the delivery. (Photo by AFP Photo/Macau Government Information Bureau) 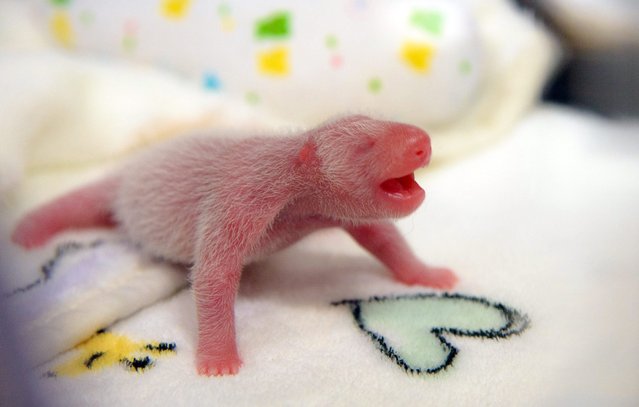 A handout picture provided by Giant Panda Pavillion of Macau on 27 June 2016 shows one of the twin giant panda cubs in intensive care, in an incubator at the Giant Panda Pavilion in Macau, China, 27 June 2016. The twins were born on 26 June with one weighing a healthy 135 grams and the other underweight at just 53.8 grams. The smaller cub had to be put in an incubator in intensive care, the Institute for civil and municipal affairs said. (Photo by Incent W. S. Sin/EPA) 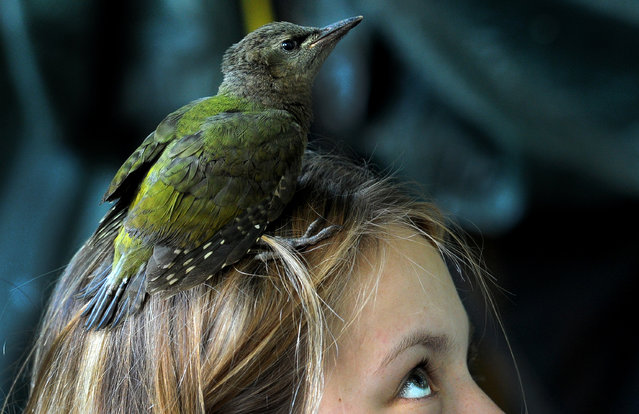 A nestling of the grey-headed woodpecker (Picus canus) falls out of his hollow as he stays on a girl's head near the village of Vasilyevskoye, some 90 km west of Moscow, on June 29, 2016. (Photo by Sergei Gapon/AFP Photo) 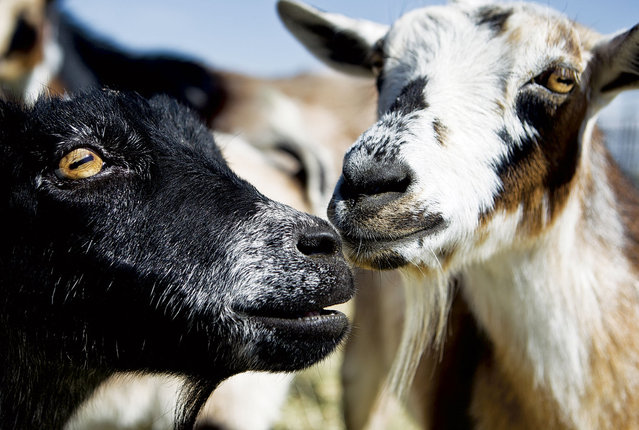 Goays graze at Home on the Range Animal Haven in Laramie, Wyo. Deb Roberts started the nonprofit organization that provides a home for old and abandoned animals. (Photo by Shannon Broderick/Laramie Boomerang via AP Photo) 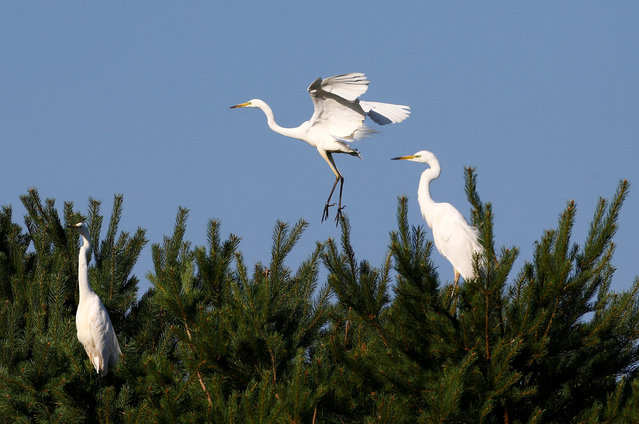 Egrets are seen at a lake near the village of Novosyolki, Belarus, June 26, 2016. (Photo by Vasily Fedosenko/Reuters) 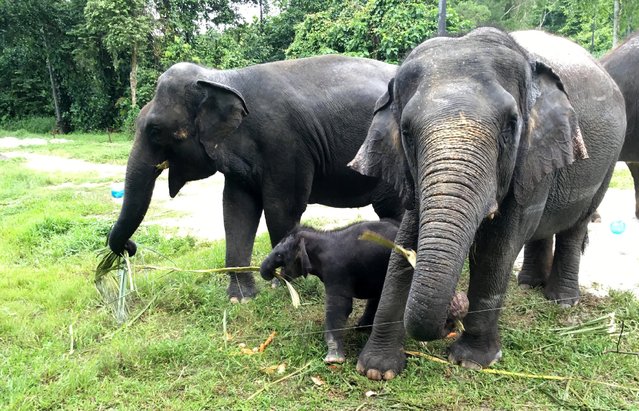 The Singapore Night Safari's first baby elephant calf (C) to be born in six years, is seen as she plays at the zoo, June 28, 2016. (Photo by Pedja Stanisic/Reuters) 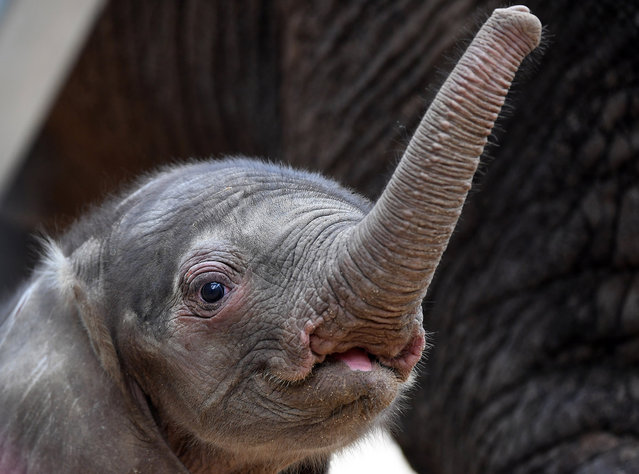 The new born elephant calf explores its enclosure at the zoo in Halle/Saale, Germany, 30 June 2016. The calf was born on Sunday, 26 June and weighed more than 90 kilos. The zoo is expecting more baby news in August: Elephant Panya will present the zoo with another calf. (Photo by Hendrik Schmidt/DPA via ZUMA Press) 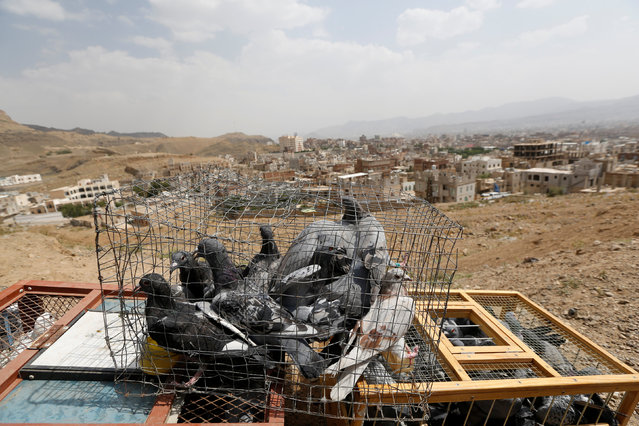 Doves are pictured before they were released by activists as part of a campaign to push Yemeni negotiators in Kuwait to reach a peace agreement, in Sanaa, Yemen June 29, 2016. (Photo by Khaled Abdullah/Reuters) 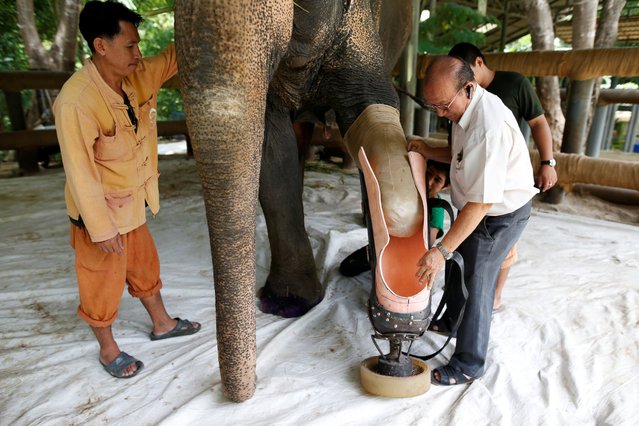 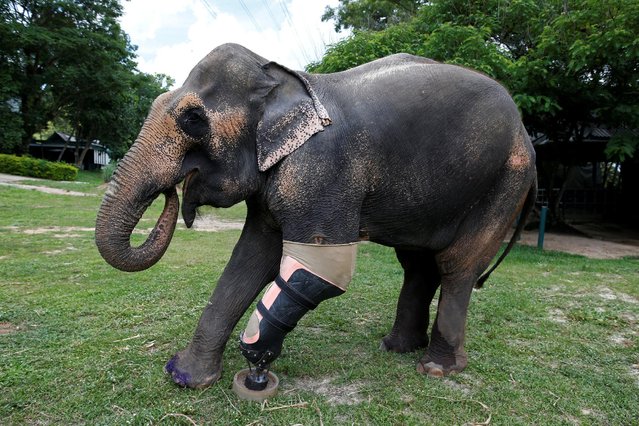 Motola, the elephant that was injured by a landmine, wears her prosthetic leg at the Friends of the Asian Elephant Foundation in Lampang, Thailand, June 29, 2016. (Photo by Athit Perawongmetha/Reuters) 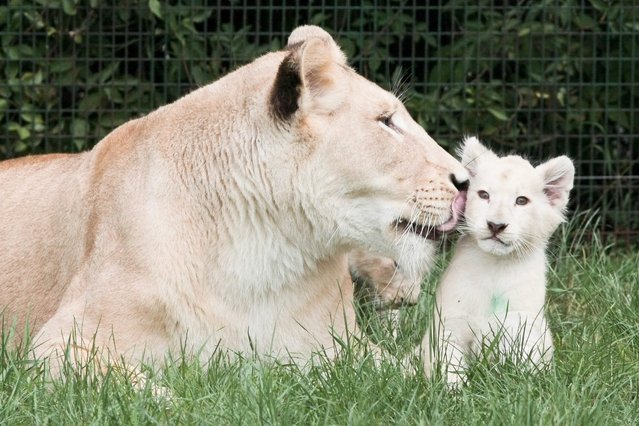 A female white lion cleans one of her cubs in their outdoor enclosure at the Zoo Safari in Swierkocin, near Gorzow Wielkopolski, Poland, 27 June 2016. Four white lion cubs were born in March 2016. (Photo by Lech Muszynski/EPA) 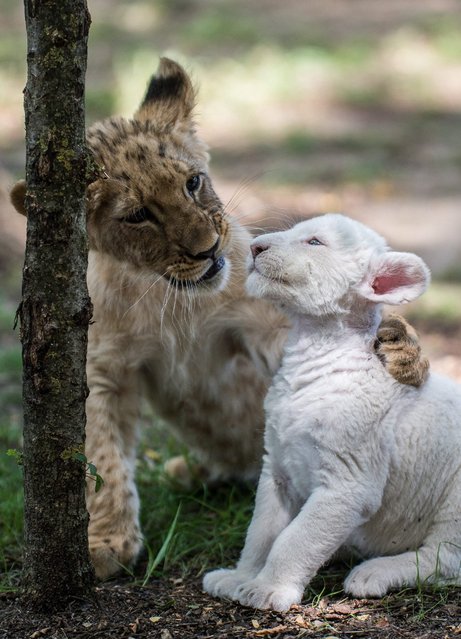 A ten-week-old male lion cub named Cecil (L) plays with Zahra, the four-week-old female white lion cub in their enclosure in Magan Zoo, a privately owned animal park in Felsolajos, 67 kms southeast of Budapest, Hungary, 30 June 2016. Zahra, who was born into a litter of four, was rejected by her mother because of an infectious disease. Zahra is now healed and raised by zoo keepers together with Cecil, a ten-week-old white lion cub who was born by Caesarean section on zoo premises. (Photo by Sandor Ujvari/EPA) 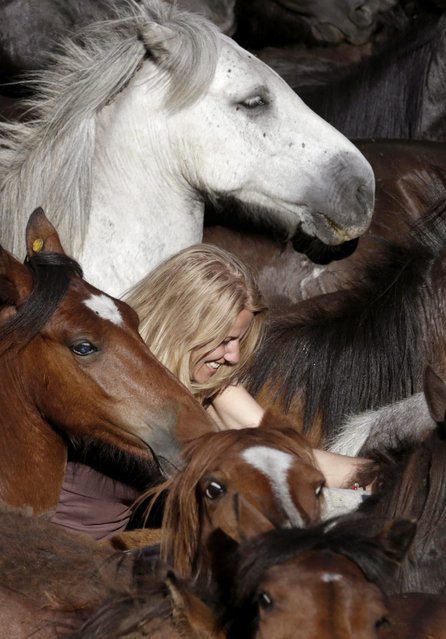 A female Sabucedo resident among savage horses tries to cut a horse's mane during the traditional “Rapa des Bestas” (Capture of the Beats) festival in Sabucedo, Pontevedra, Galicia, Spain, 02 June 2016. This traditional Fiesta of National Tourist Interest of Spain event is traditionally held on the first Saturday, Sunday and Monday of July and since centuries brings together horses living free in the mountains and mostly men to measure their strength by cutting the animal's manes. (Photo by Lavandeira Jr./EPA) 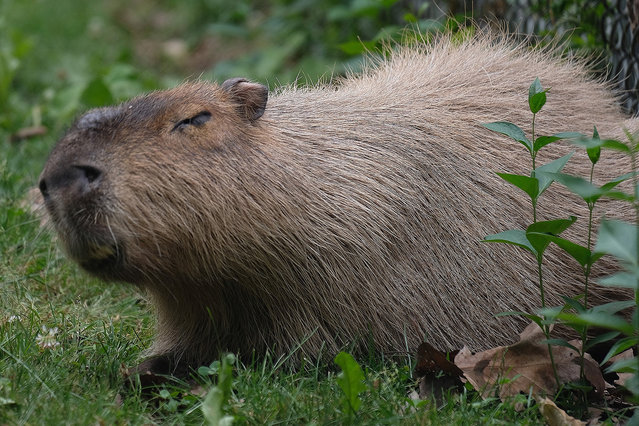 Chewy the capybara enjoys some solitude in his enclosure in the High Park Zoo in Toronto, ON, Canada on June 28, 2016. Chewy is the male rodent which did not escapee last month. Meanwhile, the formerly fugitive capybaras remain out of public view for now. (Photo by Keith Beaty/The Toronto Star via ZUMA Wire) A hyppo is seen at Buenos Aires Zoo on June 24, 2016. The zoo will temporary close to become an ecological park. (Photo by Juan Mabromata/AFP Photo) 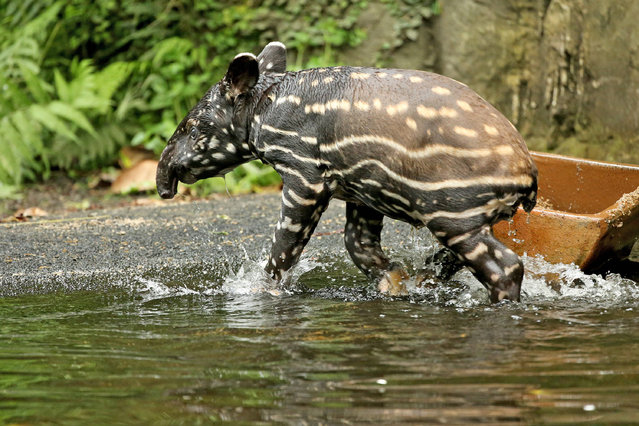 The nearly four-week-old Tapir cub bathes on June 28, 2016 in Gondwanaland at the zoo in Leipzig, Saxony. (Photo by Jan Woitas/DPA) 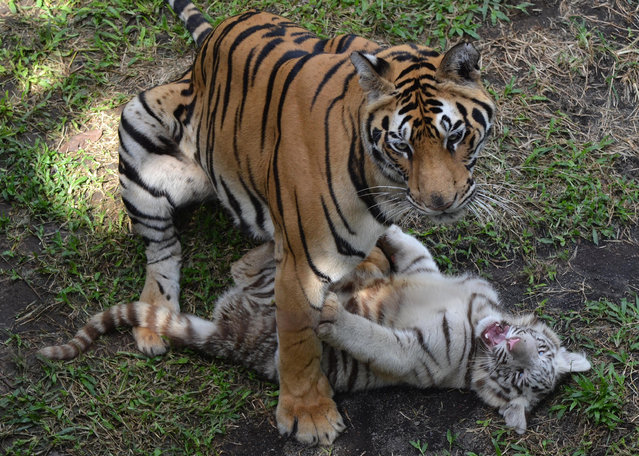 A three-month-old Bengal tiger cub plays with its mother, Reva (L), at a zoo in Malang on June 29, 2016. Threatened by the illegal wildlife trade, habitat loss and conflict with humans, the Bengal tiger is currently endangered. (Photo by Aman Rochman/AFP Photo) 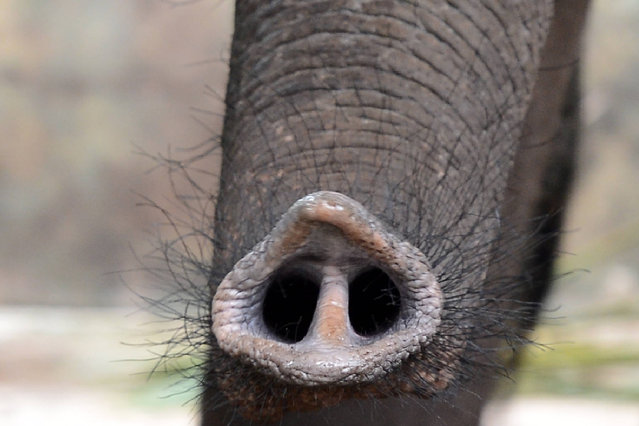 In this photograph taken on June 18, 2016, an elephant performs a routine at the zoo in Dehiwala near Colombo. Elephants are considered sacred and are protected by law in Sri Lanka, but a Buddhist monk and a judge are among dozens under investigation for poaching baby jumbos, often after killing their mothers. (Photo by Lakruwan Wanniarachchi/AFP Photo) 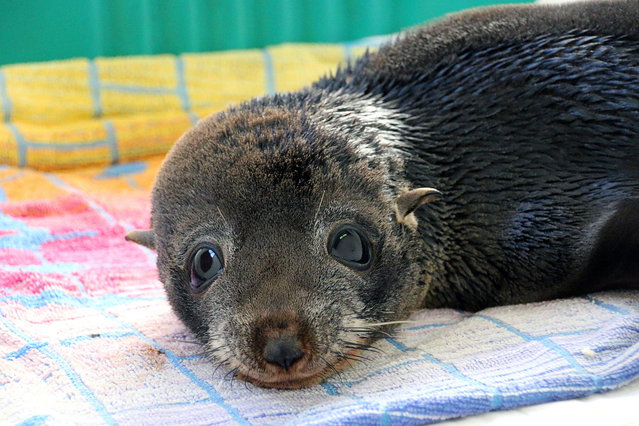 An undated handout picture made available by Australia's Taronga Zoo shows 18-month-old long-nosed fur seal nicknamed “Elvis” at Taronga Zoo Wildlife Hospital in Sydney, New South Wales, Australia. Elvis was released in a joint operation by the Taronga Zoo veterinarians, the Organisation for the Rescuege and Research of Cetaceans in Australia (ORRCA) and the Royal Society for the Prevention of Cruelty to Animals (RSPCA) outside Sydney Headlands, after being brought to Taronga Wildlife Hospital on 17 June, when he was found exhausted and malnourished on South Curl Curl Beach following wild storms in Sydney. (Photo by Taronga Zoo/EPA) 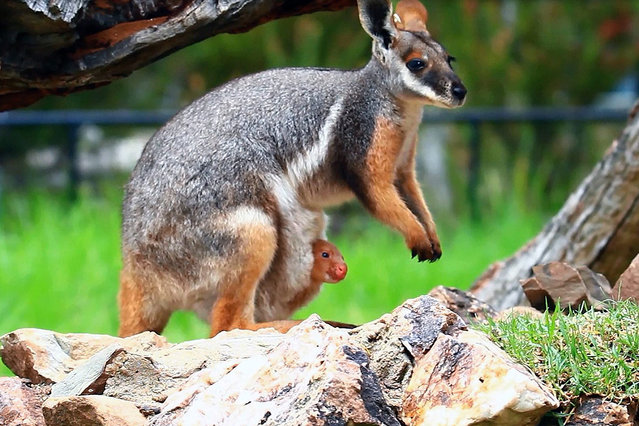 An undated handout picture made available by the Adelaide Zoo on 28 June 2016 shows Makaia, an orphaned tree kangaroo, as a joey, being fostered by a yellow-footed rock wallaby at Adelaide Zoo, in Adelaide, Southern Australia, Australia. The tree kangaroo, which was saved when it was adopted by the wallaby, is set to leave Adelaide Zoo for a new home at the Singapore Zoo. (Photo by EPA/Adelaide Zoo) 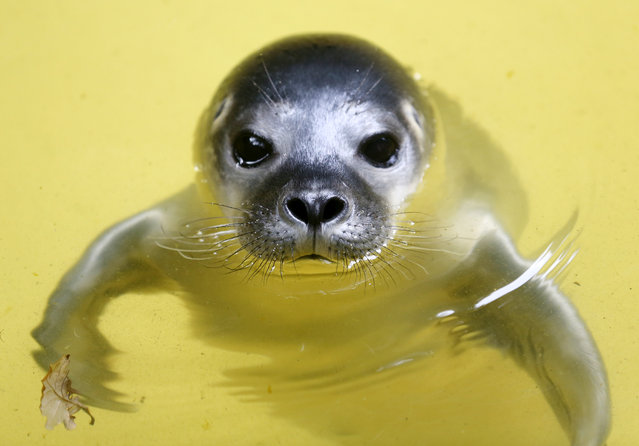 The five days old yet to be named baby seal swimming in water at Duisburg zoo, Germany, 28 June 2016. As the baby seal was born in the water, the zookeepers so far could not determine its gender. (Photo by Roland Weihrauch/EPA) 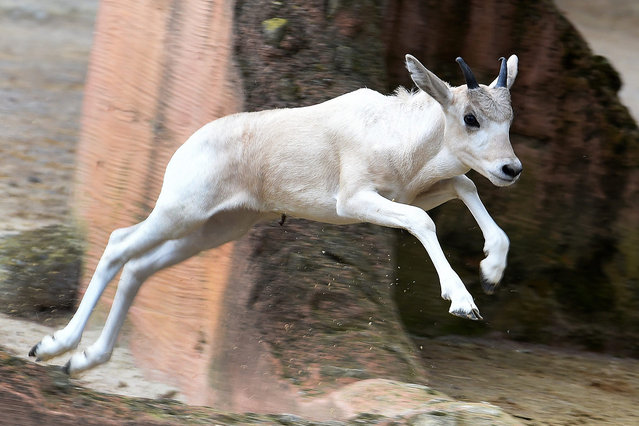 A young white Addax desert antelope jumps around the outdoor enclosure at the zoo in Hannover, Germany, 30 June 2016. In total, two baby antelopes were born in the zoo in mid-May. In their African home region the Addax are critically endangered. (Photo by Holger Hollemann/EPA) 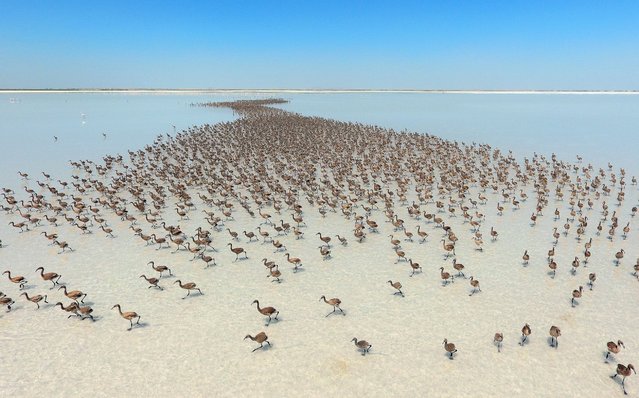