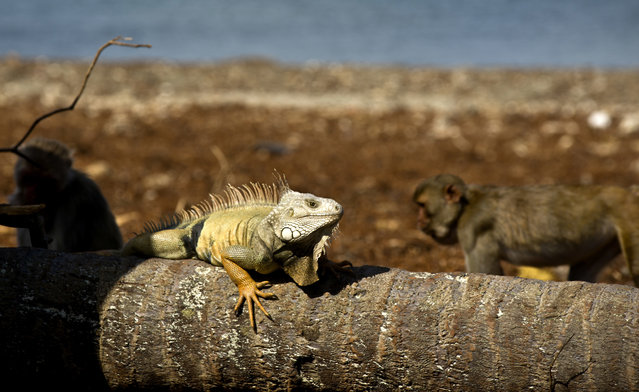 In this Wednesday, October 4, 2017 photo, an iguana sunbathes as monkeys walk behind on Cayo Santiago, known as Monkey Island, in Puerto Rico, one of the world’s most important sites for research into how primates think, socialize and evolve. In 1938, man known as the father of American primate science, Clarence Ray Carpenter, wanted a place with the perfect mix of isolation and free range, where the monkeys could be studied living much as they do in nature without the difficulties of tracking them through the wild. (Photo by Ramon Espinosa/AP Photo) 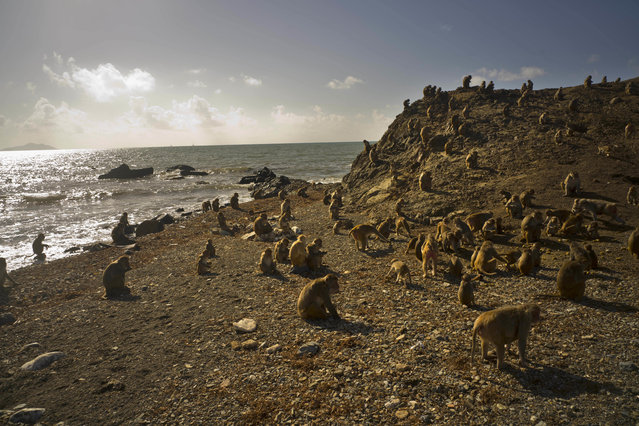 Monkeys gather on the shore of Cayo Santiago, known as Monkey Island, in Puerto Rico on Wednesday, October 4, 2017. One of the first places Hurricane Maria hit in the U.S. territory Sept. 20 was this 40-acre outcropping off the east coast – one of the world's most important sites for research into how primates think, socialize and evolve. (Photo by Ramon Espinosa/AP Photo) 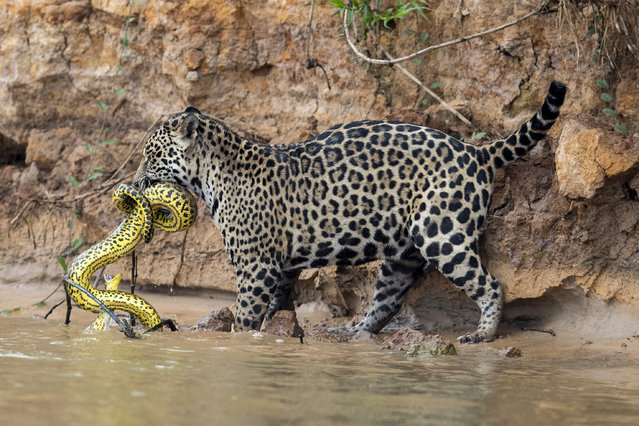 A jaguar stalks and kills a yellow anaconda on the Cuiaba River in the Pantanal in Mato Grosso, Brazil. The cat spotted the snake resting on the riverbank and chased it into the shallow waters at the river's edge before struggling with it for over two minutes on the morning of the 29th of September, 2017. Anaconda kills by jaguars have only been observed on a handful of occasions and very few photographs of this incredibly rare behaviour are known to exist. Brunskill has spent a month observing the jaguars of the Brazilian Pantanal and last week his patience was rewarded when a jaguar captured a caiman. (Photo by Chris Brunskill Ltd/Getty Images) 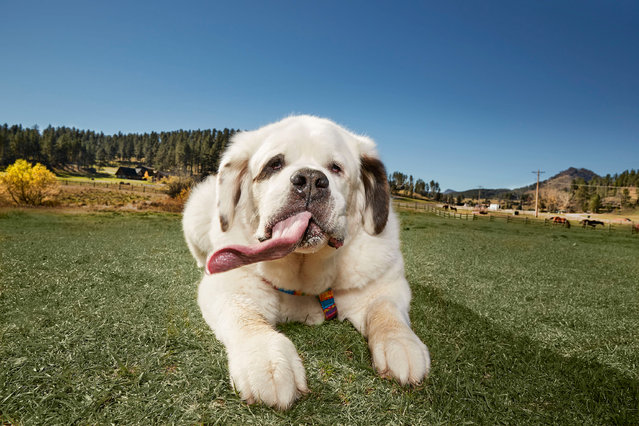 An eight-year-old St Bernard with the longest canine tongue in the world, measuring 18.58cm (7.31in) in length, as recorded by the Guinness World Records: Amazing Animals, in South Dakota, USA. (Photo by Kevin Scott Ramos/GWR/PA Wire) 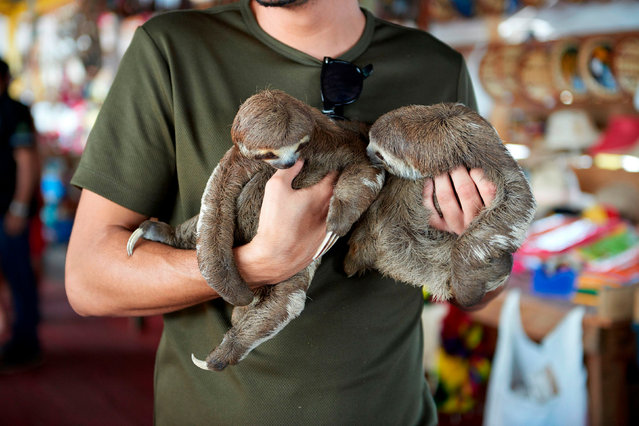 This handout picture released on October 4, 2017 by World Animal Protection shows a tourist posing with two sloths in an unspecified location in Brazil on April 10, 2016. .The craze for tourists taking selfies alongside wild animals then posting on Instagram is fueling cruel treatment of iconic species in the Amazon, activists warn. The charity World Animal Protection said in a report that Instagram has seen a 292 percent increase in wildlife selfies since 2014 around the world. Of these, more than 40 percent involved humans “hugging or inappropriately interacting with a wild animal”. (Photo by AFP Photo/World Animal Protection) 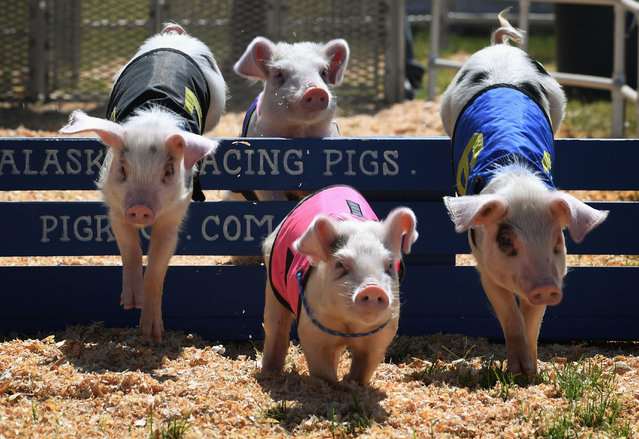 Piglets compete in the All Alaskan Pig race during the annual Kern County Fair in Bakersfield, California on September 30, 2017. (Photo by Mark Ralston/AFP Photo) 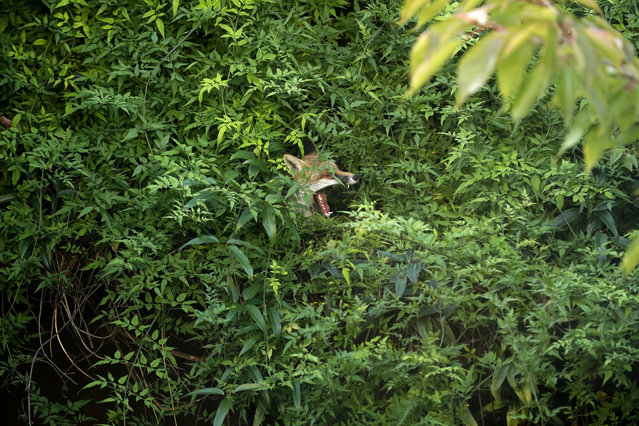 A fox, Vulpes vulpes, yawns in the morning as it sits elevated above the ground after climbing up onto the top wooden beam of a type of arbor covered in climbing plants in a domestic back garden in south west London, Tuesday, October 3, 2017. There are many foxes living in London and in urban areas throughout Britain, they are primarily nocturnal and often seek places to hide and rest during the daytime. (Photo by Matt Dunham/AP Photo) 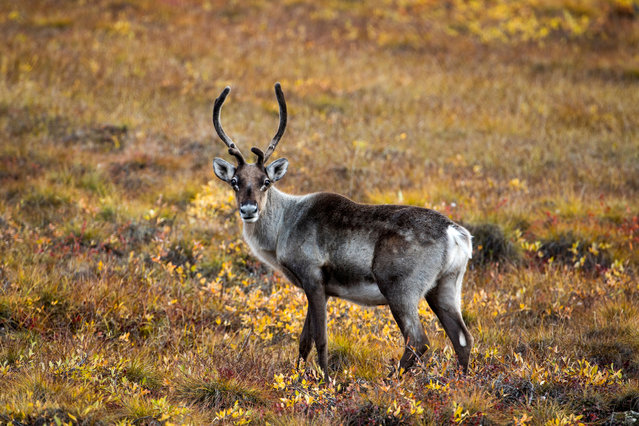 A caribou crosses the Arctic tundra along the Dalton Highway near Sagwon, Alaska, USA, 04 September 2017. Stretching 414 miles (666 kilometers) north from central Alaska to Prudhoe Bay, the Dalton Highway is one of America's northernmost roads and arguably its most remote. Built as a supply road for the Trans-Alaska Pipeline, the Dalton was opened to public use in 1981. Largely gravel and littered with potholes, a round-trip drive takes four days. Though it still offers few facilities and no radio, cell service, or internet the Haul Road, as it is often called, rewards its rare visitors with spectacular Arctic scenery. (Photo by Jim Lo Scalzo/EPA/EFE) 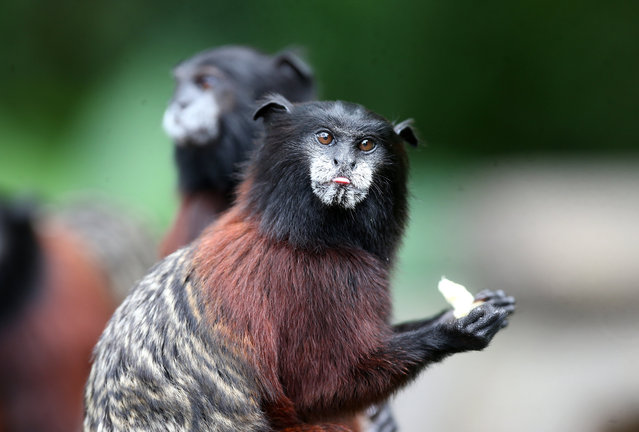 A Peruvian monkey 'pichico' (Saguinus fuscicollis) is seen at Monkeys Island, near the village of Iquitos, at the Amazonian region of Peru, 27 September 2017 (issued 30 September, 2017). Monkeys Island is a true sanctuary where the animals that have been victims of smuggling or abuse recover their total freedom. (Photo by Ernesto Arias/EPA/EFE) 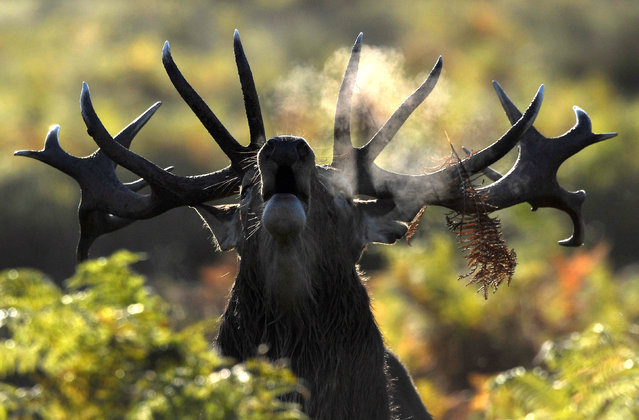