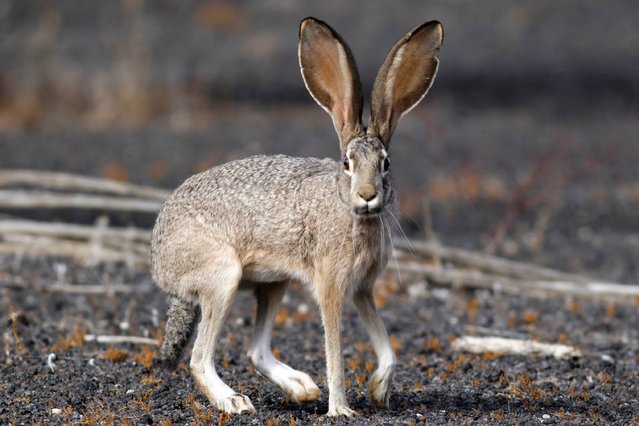 This handout photo taken on December 2, 2016, provided by the El Pinacate and Great Altar Desert Biosphere Reserve, shows a European hare (Lepus europaeus) in the reserve along the US border in northern Mexico. Threatened species like the Sonoran pronghorn or desert bighorn sheep freely cross the border between Mexico and the United States in protected biospheres, but the construction of US President Donald Trump's wall will block their movement in these desert valleys and could drive them to extinction. (Photo by Miguel Angel Grageda/AFP Photo) 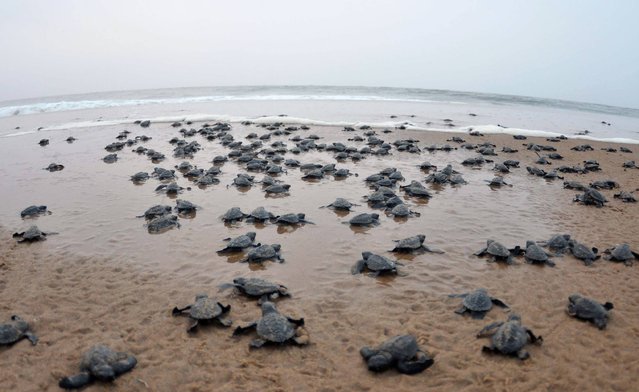 Newly-hatched Olive Ridley turtles make their way to the ocean at Rushikulya beach in Ganjam district, 150 kilometres south of the eastern Indian city of Bhubaneswar, on April 8, 2017. Millions of baby Olive Ridley turtles are hatching and entering the Bay of Bengal, one of the mass nesting sites in the Indian coastal state of Orissa. (Photo by Asit Kumar/AFP Photo) 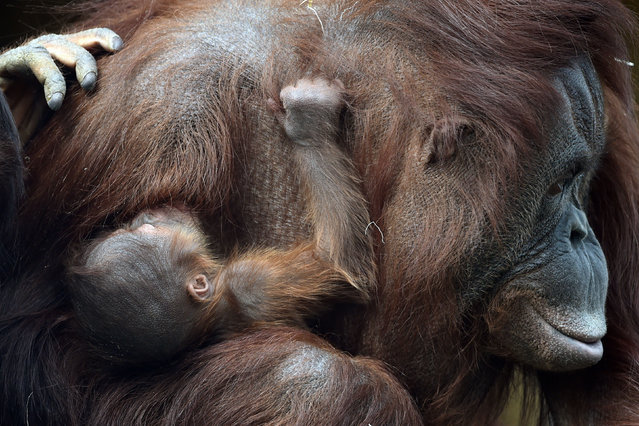 A critically-endangered Bornean orangutan Maliku with its week old baby at Twycross Zoo in Leicestershire, UK on April 5, 2017. The as-yet unnamed primate is the first great ape baby to be born at the zoo this year as part of a European-wide breeding programme. (Photo by Joe Giddens/PA Wire) 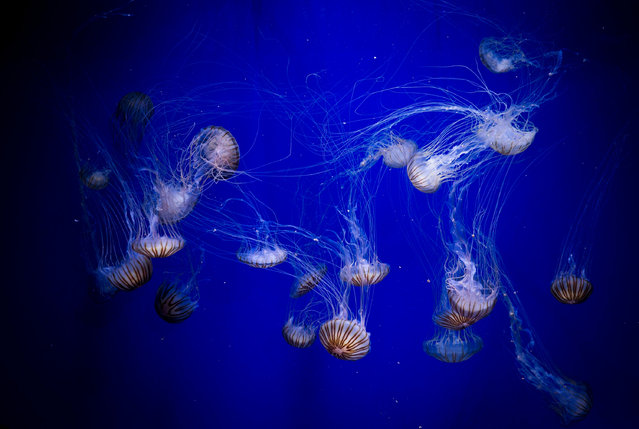 Brown jellyfish (chrysaora melanaster) swim in a tank at the instalation “Jellyfishes as never you had seen them” at the Oceanografic in Valencia, Spain, 06 April 2017. Oceanografic's new proposal is offering sixteen new tanks with different jellyfishes from all over the world. (Photo by Kai Foersterling/EPA) 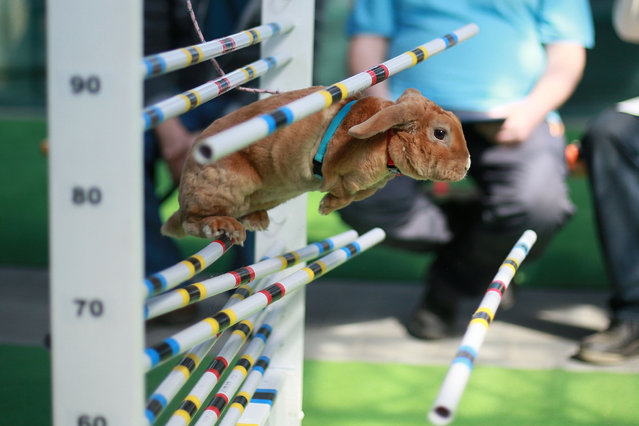 A rabbit fails to jump over an obstacle during a rabbit track and field competition on the sidelines of a hunting exhibition in Kromeriz, about 60 km east of Prague, on April 1, 2017. Circa 100 rabbits took part in the competition, including disciplines as long jump, high jump and running on a flat track. (Photo by Radek Mica/AFP Photo) 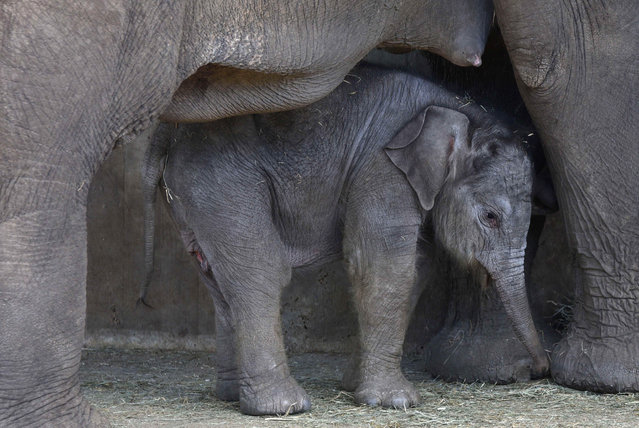 A newborn Sumatran elephant with its mother “Cynthia” at Madrid Zoo in Madrid, Spain on April 3, 2017. (Photo by Garcia/Pacific Press/SIPA Press/Rex Features/Shutterstock) 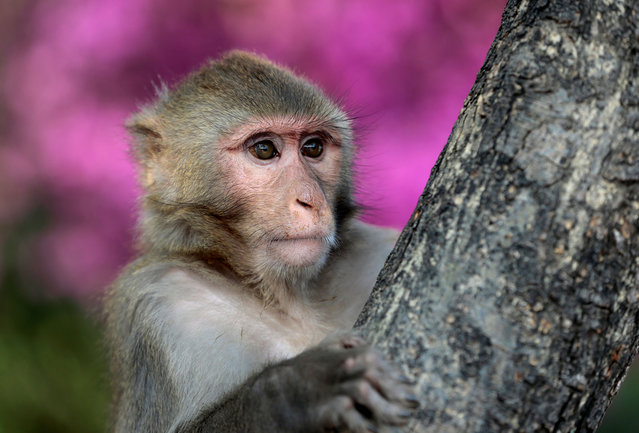 A monkey watches tourists from a tree in the hills overlooking Islamabad, Pakistan April 4, 2017. (Photo by Caren Firouz/Reuters) 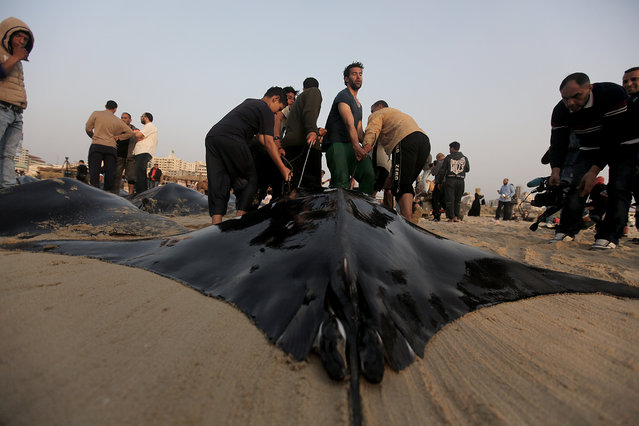 Palestinian fishermen pull out a catch of devil rays fish into a beach overlooking the Mediterranean Sea in the west of Gaza City, the Gaza Strip, 06 April 2017. The interior ministry of Gaza allowed fishermen out to the sea on 06 April 2017, after having previously barred exits by sea following the assassination of a senior leader of the Ezz-Al Din Al Qassam Mazen Faqha on 24 March 2017, that was blamed on the Israel intelligence agency Mossad. (Photo by Mohammed Saber/EPA) 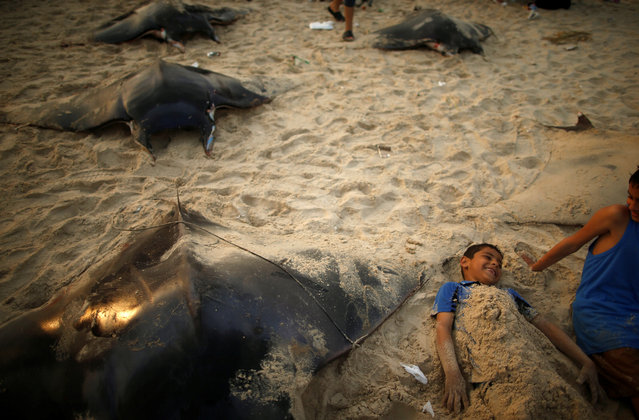 A Palestinian boy lies on sand next to Devil Rays, on a beach in Gaza City on April 6, 2017. (Photo by Mohammed Salem/Reuters) 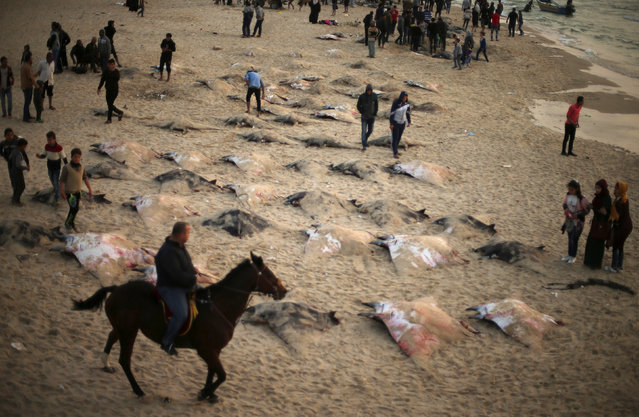 Palestinians look at Devil Rays on a beach in Gaza City April 6, 2017. (Photo by Mohammed Salem/Reuters) 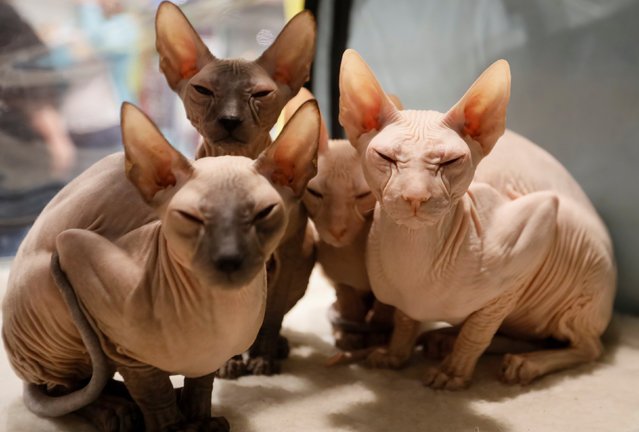 Peterbald kittens sit inside their cage during a regional cat exhibition in Almaty, Kazakhstan April 8, 2017. (Photo by Shamil Zhumatov/Reuters) 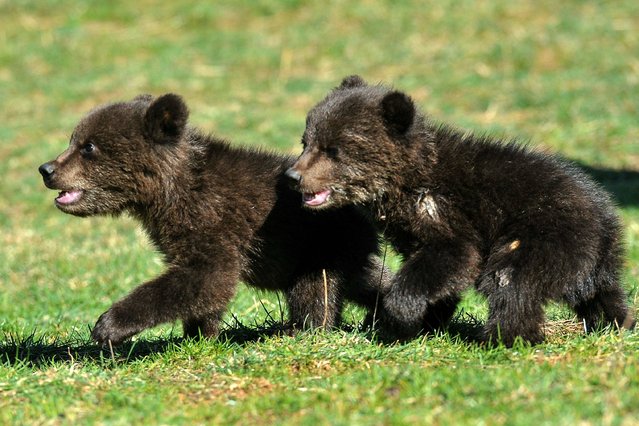 A picture taken on March 28, 2017 shows two orphan bear cubs, named Masha and Brundo, playing in a village located some 20 kilometres north of the capital Podgorica, at the family property of a 31-year old animal lover in Blisna, who took them temporarily so that they can grow up in conditions as close as possible to the wild life. Their mother was without doubt killed by a hunter – Montenegro is moved over two orphan bear cubs, saved by humans from a certain death from hunger but torn from the wild. Montenegrin mountains are home to 50 to 100 brown bears, according to ecologists while the national hunters' association puts their number at 357. (Photo by Savo Prelevic/AFP Photo) 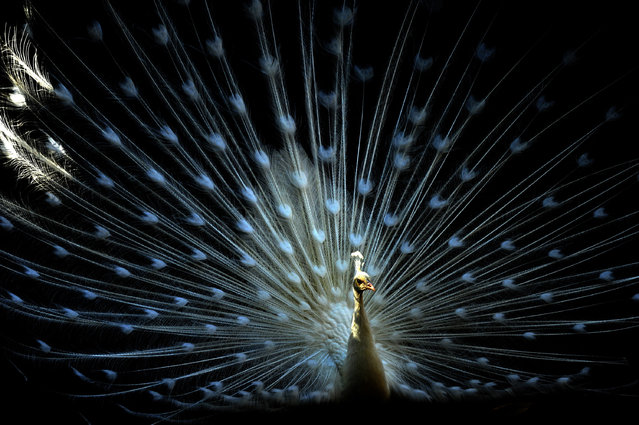 A peacock is seen inside its enclosure at a zoo in Tbilisi, Georgia on April 4, 2017. (Photo by Vano Shlamov/AFP Photo) 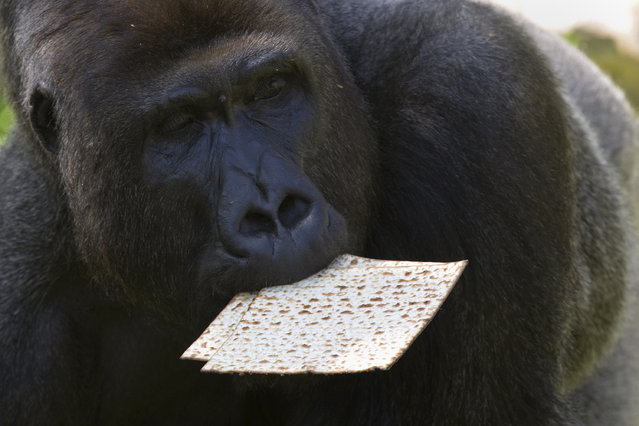 A gorilla eats matzo, a traditional handmade unleavened bread for Passover, at the Ramat Gan Safari, near Tel Aviv, Israel, Thursday, April 6, 2017. Gorillas and other animals are usually fed bread, but since the zookeepers and handlers cannot touch any leavened products during the week-long holiday of Passover, that marks the biblical Jewish exodus from Egypt, they are given matzah. (Photo by Sebastian Scheiner/AP Photo) 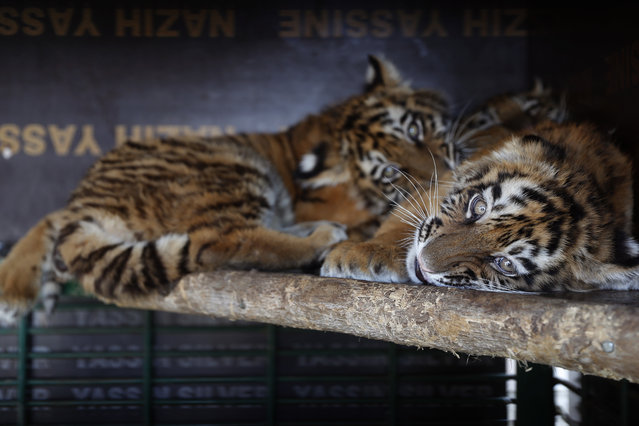 In this Wednesday March 29, 2017 photo, Siberian tigers destined for a zoo in war-torn Syria, and rescued by Animals Lebanon, an animal rights group, lie inside a cage, in Aley, east of Beirut, Lebanon. Three tiger cubs, which were being transported from Ukraine, were trapped in an unmarked maggot-infested crate in Beirut’s airport for almost a week, where they could not stand or move and were forced to urinate and defecate on each other, according to Animals Lebanon. (Photo by Hussein Malla/AP Photo) 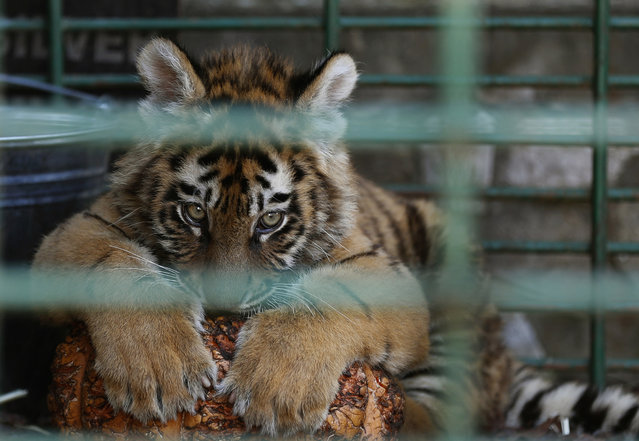 In this Wednesday March 29, 2017 photo, a Siberian tiger destined for a zoo in war-torn Syria, and rescued by Animals Lebanon, an animal rights group, sits inside a cage, in Aley, east of Beirut, Lebanon. (Photo by Hussein Malla/AP Photo) 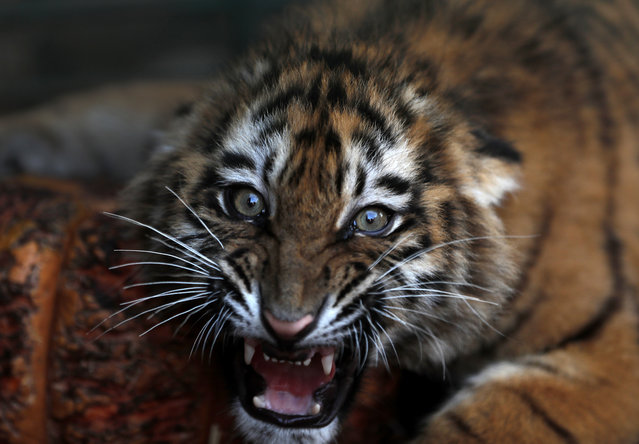 In this Wednesday March 29, 2017 photo, a Siberian tiger destined for a zoo in war-torn Syria, and rescued by Animals Lebanon, an animal rights group, roars inside a cage, in Aley, east of Beirut, Lebanon. (Photo by Hussein Malla/AP Photo) 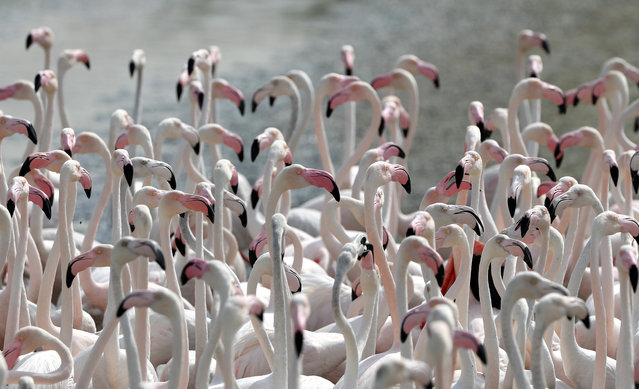 Pink flamingos stand in the water at the Ras al-Khor Wildlife Sanctuary on the outskirts of Dubai, in the United Arab Emirates, on April 3, 2017. (Photo by Karim Sahib/AFP Photo) 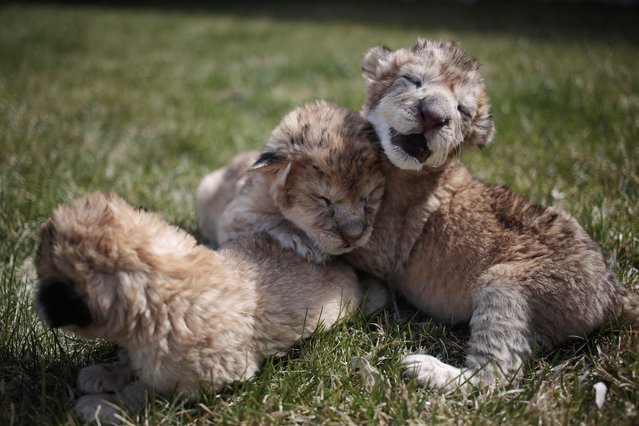 A picture taken on April 1, 2017 shows three lions cubs, born two days ago, on the grass, at the Taigan Safari Park, in Belogorsk, about 40 km from Simferopol, Crimea. (Photo by Max Vetrov/AFP Photo) 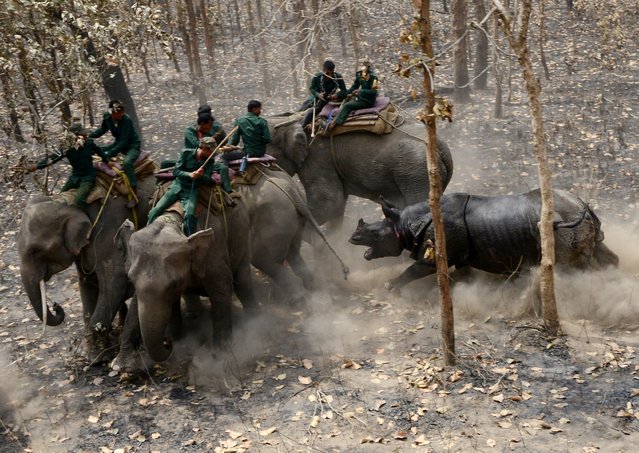 A relocated rhino charges a Nepalese forestry and technical team after being released as part of a relocation project in Chitwan National Park some of 250 Kilometer South of Kathmandu on April 3, 2017. Conservationists on April 3 captured a rare one-horned rhinoceros in Nepal as part of an attempt to increase the number of the vulnerable animals, which are prized by wildlife poachers. Five rhinos – one male and four female – will be released into a national park in Nepal's far west over the coming week in the hope of establishing a new breeding group. (Photo by Prakash Mathema/AFP Photo) 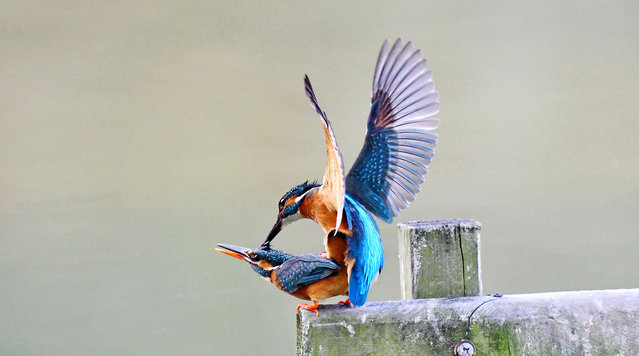 A pair of kingfishers are seen at a park in Fuzhou, capital of southeast China's Fujian Province, April 4, 2017. (Photo by Mei Yongcun/Xinhua via Getty Images) 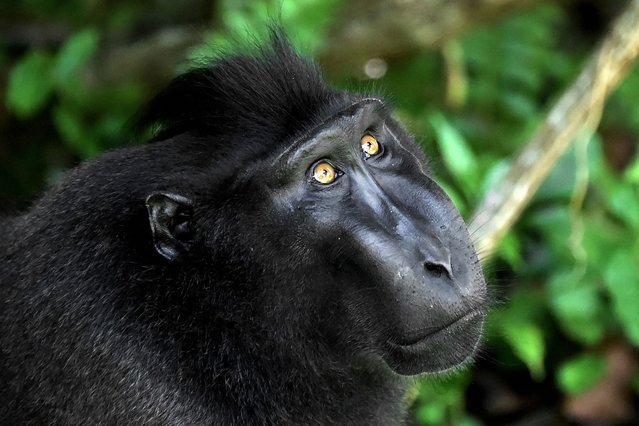 This picture taken on February 19, 2017 shows a black crested macaque (Macaca nigra) in the Tangkoko nature reserve in northern Sulawesi. Authorities and activists are stepping up efforts to persuade villagers on Sulawesi island to stop consuming the critically endangered monkeys, one of many exotic creatures that form part of the local indigenous community's diet. The animal, whose scientific name is Macaca nigra, is part of a kaleidoscope of exotic wildlife found across Indonesia, including tigers and orangutans, who face a range of threats from poachers to the destruction of their habitat. (Photo by Bay Ismoyo/AFP Photo) 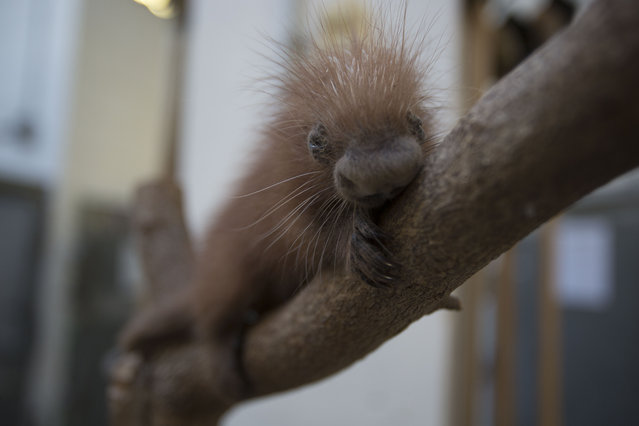 A baby prehinsile-tailed porcupine, one or two days after its birth at the National Zoo in Washington, April 2017. The porcupette is the third for mom Bess and dad Clark.(Photo by Roshan Patel/Smithsonian’s National Zoo)
Edit Del
09 Apr 2017 09:49:00, post received 0 comments
Publication archive:
←   →
Popular tags:
All tags
Last searches: