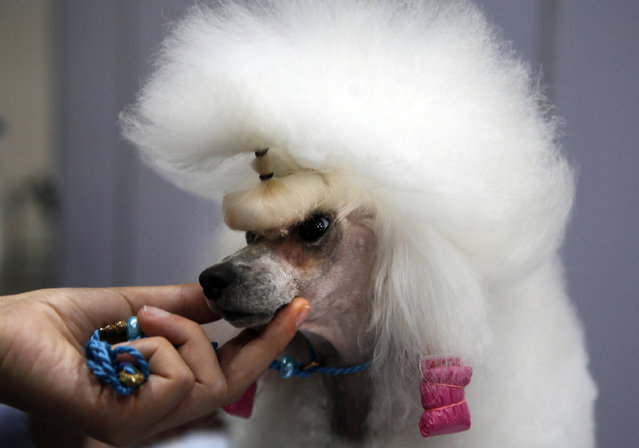 Topy, a 5-year-old Poodle, is groomed during the Thailand International Dog Show in Bangkok, Thailand, Thursday, June 29, 2017. The dog show is held from June 29 until July 2. (Photo by Kankanit Wiriyasajja/AP Photo) 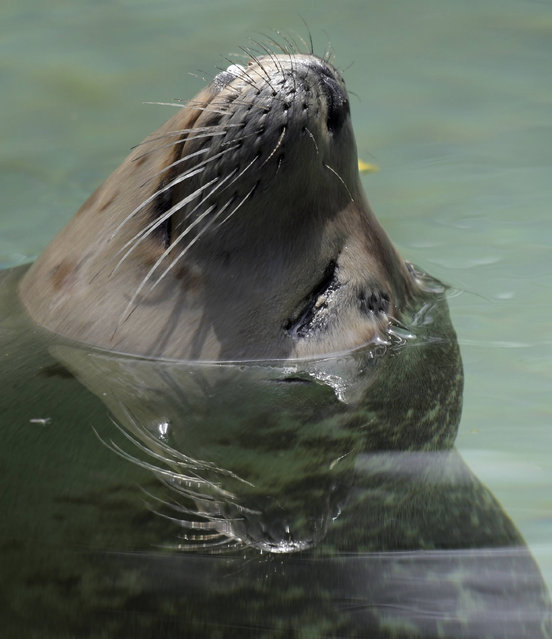 A seal peaks out of the water, enjoying the sunshine at the zoo in Augsburg, Germany, June 26, 2017. (Photo by Stefan Puchner/DPA via AP Photo) 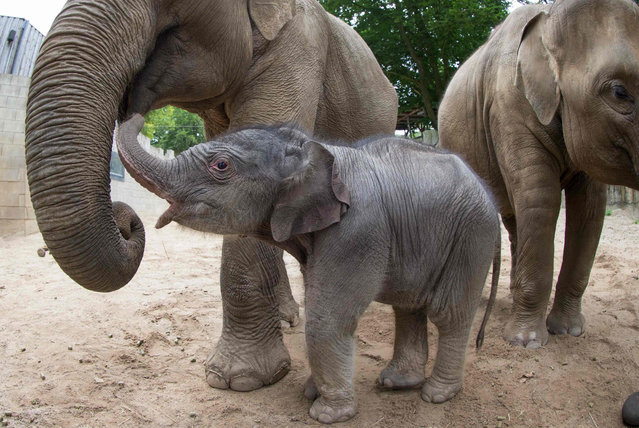 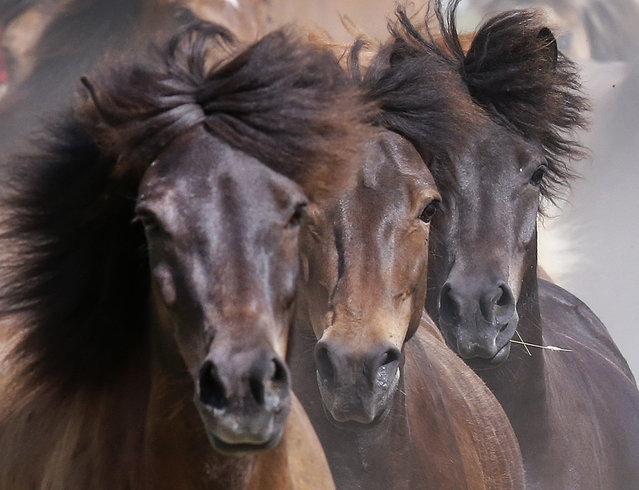 Icelandic horses are driven back from their paddock to their stables at an stud farm in Anspach, Germany, Monday, June 26, 2017. (Photo by Michael Probst/AP Photo) 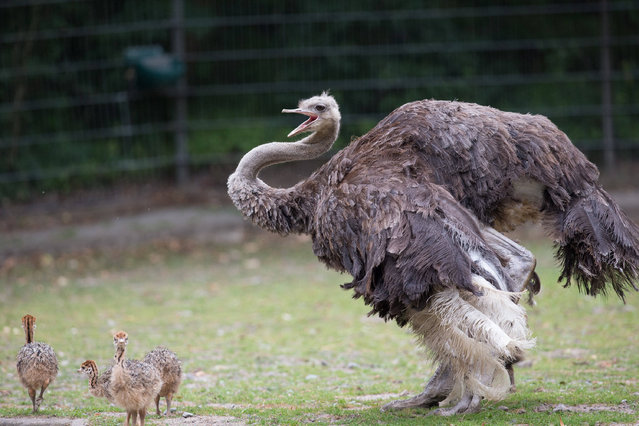 Ostrich “Muenchi” and its newborn chicks can be seen in a non- public enclosure at the zoo in Muenster, Germany, 27 June 2017. Nine chicks were born in the middle of June. One of the animals has black feathers. According to the zoo, the black feathers are a rare colour disorder. (Photo by Friso Gentsch/DPA) 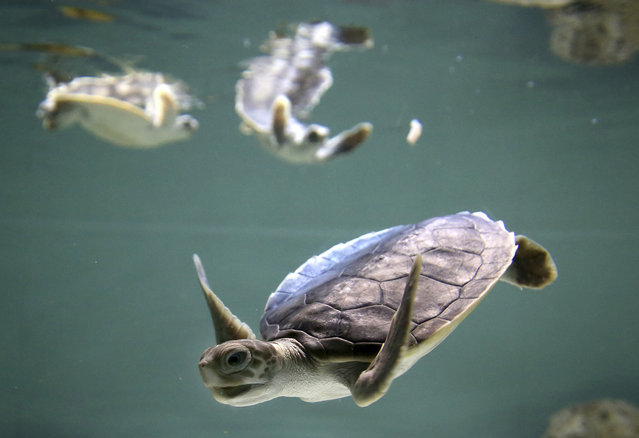 Baby flatback sea turtle are fed at the Sea Life Sydney Aquarium in Sydney, Friday, July 7, 2017. Uniquely Australian and a vulnerable species, the tiny turtles were rescued after being trapped in their nest and will be released back into the wild after in early 2018. (Photo by Rick Rycroft/AP Photo) 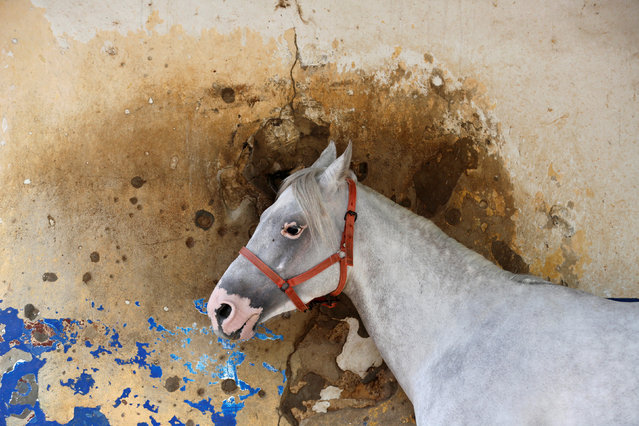 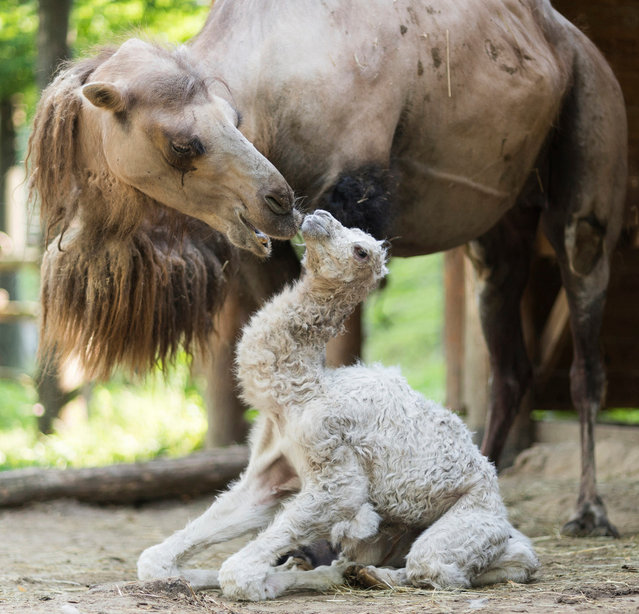 A newborn bactrian camel (Camelus bactrianus) is nozzled by her mother in their enclosure in the Nyiregyhaza Animal Park in Nyiregyhaza, 227 kms east of Budapest, Hungary, 28 June 2017. The baby was born weighing 15 kilograms and wearing white fur. Unlike Arabian camels, which have a single hump, Bactrian camels have two humps and are endangered. (Photo by Attila Balazs/EPA) 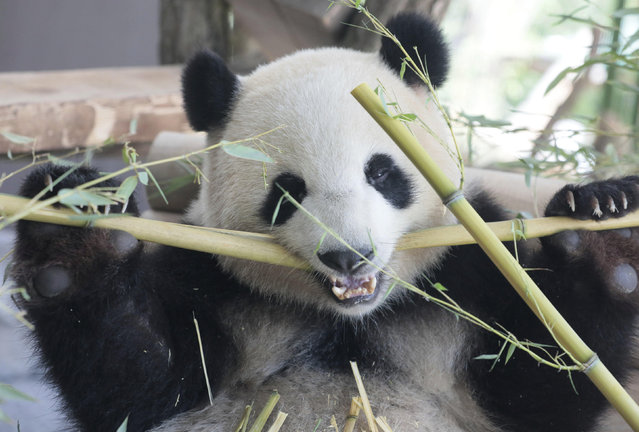 One of the two Chinese panda bears Meng Meng and Jiao Qing eats after the official opening of their enclosure at the Zoo in Berlin, Germany, Wednesday, July 5, 2017. (Photo by Axel Schmidt/Pool Photo via AP Photo) 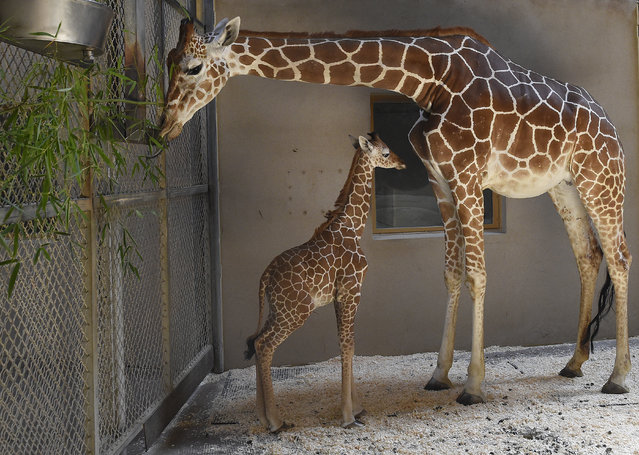 This June 28, 2017 photo provided by The Maryland Zoo shows a baby giraffe, Julius, and his mother, Kesi, at the zoo in Baltimore. The three-week-old baby giraffe has been placed in intensive care at a Maryland zoo after a sudden change in its bloodwork. The calf has been struggling since he was born June 15 at The Maryland Zoo. (Photo by Jeffrey F. Bill/The Maryland Zoo via AP Photo) 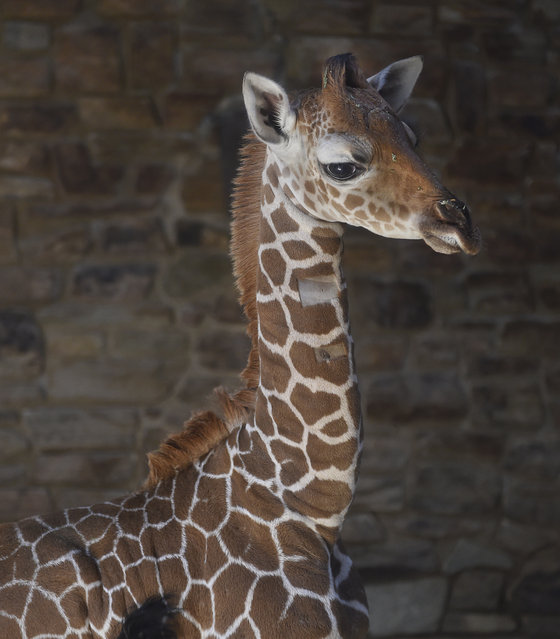 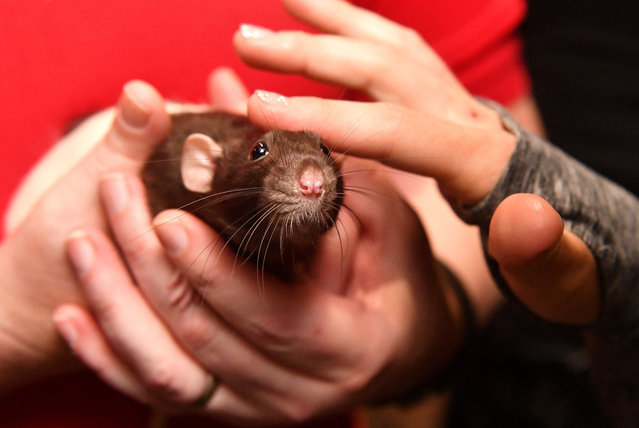 Sprout the rat looks on while being pet during a popup Rat Cafe at the San Francisco Dungeon in San Francisco, California on July 1, 2017. The San Francisco Dungeon, a tourist attraction where actors reenact the region’s history, will host a pop- up rat cafe for two days this summer, July 1 and 7. Charlotte was saved from being eaten by a snake at a pet store before being adopted by Rattie Ratz. (Photo by Josh Edelson/AFP Photo) 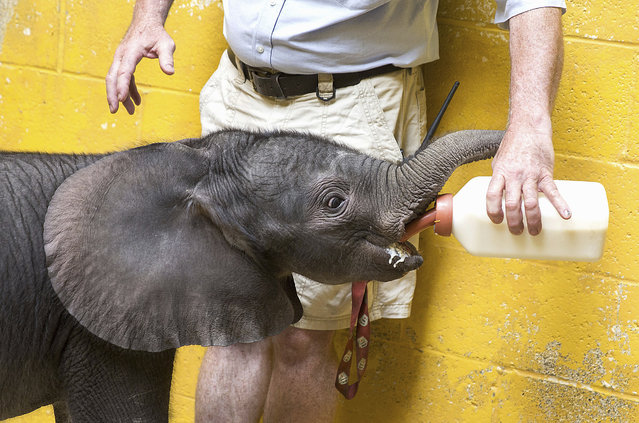 In this June 6, 2017, file photo, Willie Theison bottle feeds the new baby elephant calf at the Pittsburgh Zoo & PPG Aquarium in Pittsburgh. The Pittsburgh Zoo & PPG Aquarium says its new baby elephant is ready for visitors, and the female calf will be on view through a window in the zoo's elephant family room starting Friday, July 7. The calf was born at the zoo's International Conservation Center on May 31, about a month prematurely. Its mother is Seeni, a 21-year-old elephant that's among three the zoo rescued from Botswana in 2011. (Photo by Antonella Crescimbeni/Pittsburgh Post-Gazette via AP Photo) 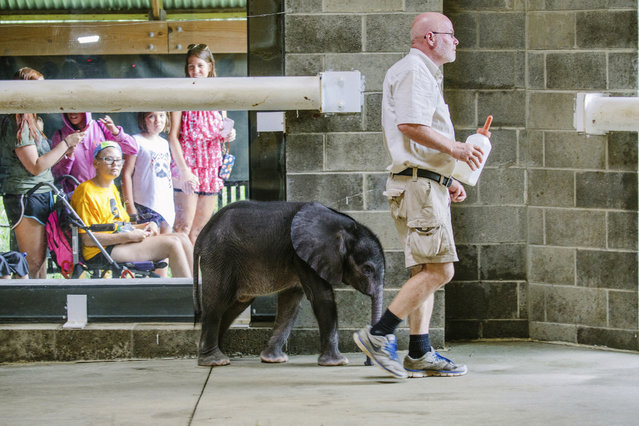 In this Friday, July 7, 2017 photo, elephant manager Willie Theison walks with a 4-week-old baby elephant at the elephant family room at the Pittsburgh Zoo & PPG Aquarium in Pittsburgh. The baby was introduced for public viewing for the first time. (Photo by Andrew Rush/Pittsburgh Post-Gazette via AP Photo) 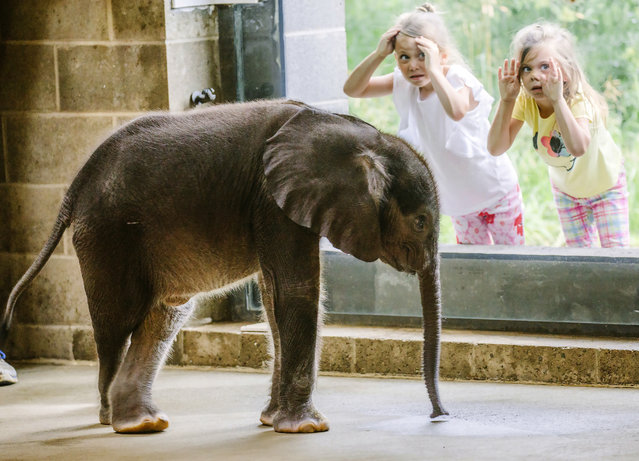 In this Friday, July 7, 2017 photo, young visitors view the Pittsburgh Zoo & PPG Aquarium's 4-week-old baby elephant as it meets the public for the first time at the elephant family room in Pittsburgh. (Photo by Andrew Rush/Pittsburgh Post-Gazette via AP Photo) 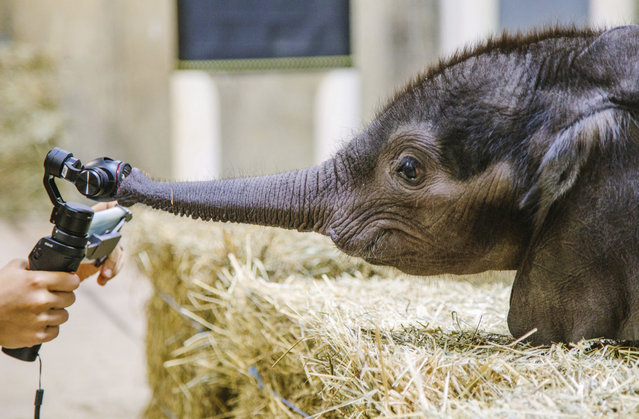 In this Friday, July 7, 2017 photo, a 4-week-old baby elephant inspects a camera after meeting the public for the first time at the Pittsburgh Zoo & PPG Aquarium in Pittsburgh. (Photo by Andrew Rush/Pittsburgh Post-Gazette via AP Photo) 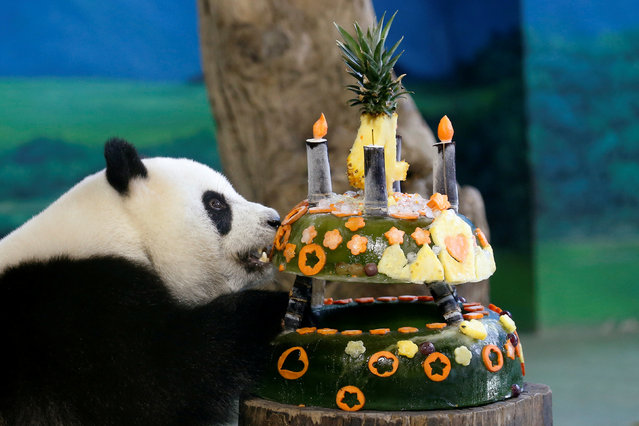 A giant panda Yuan Zai eats her “birthday cake” made from ice and fruits at Taipei Zoo, in Taipei, Taiwan July 6, 2017. (Photo by Tyrone Siu/Reuters) 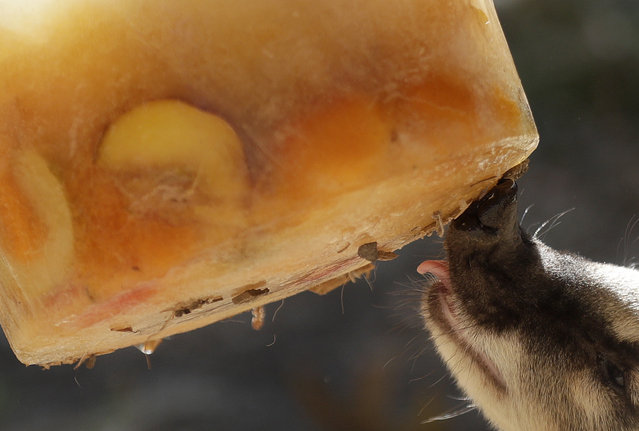 A lemur licks a block of ice containing fruit at Rome's Bioparco zoo, Wednesday, July 5, 2017. Zookeepers at the Bioparco often give animals ice blocks with either fruit or meat on hot summer days. (Photo by Gregorio Borgia/AP Photo) 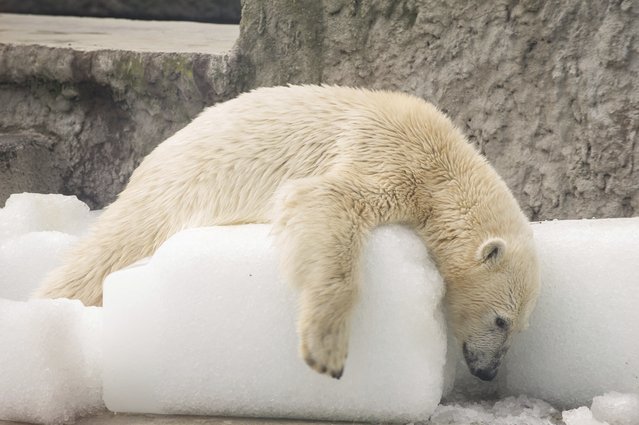 A polar bear plays with ice blocks in its enclosure at the zoo as the temperature reaches 30 degrees Celsius (86 Fahrenheit) in Budapest, Hungary, Friday, July 7, 2017. (Photo by Bea Kallos/MTI via AP Photo) 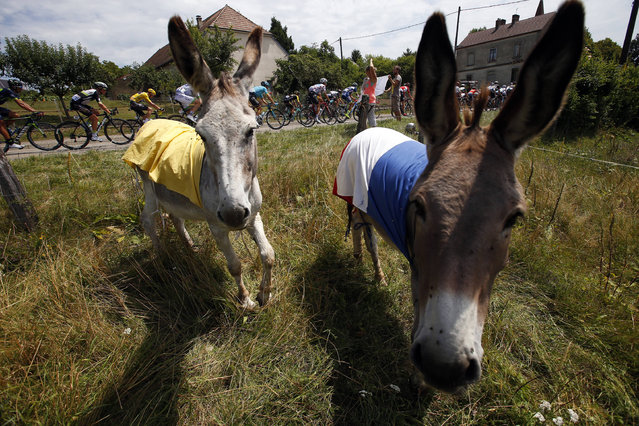