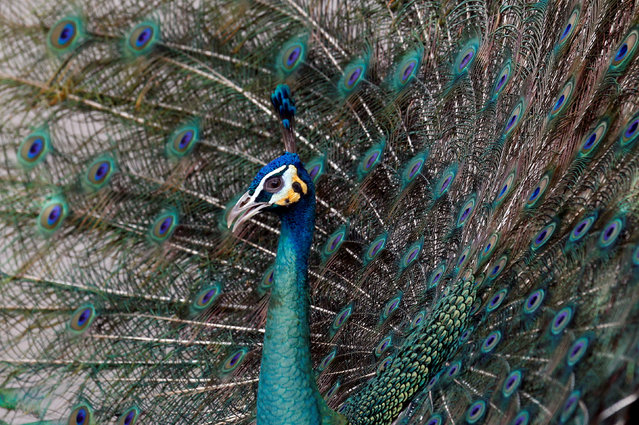 A peacock spreading its feathers is seen at the Wat Phra Dhammakaya temple, in Pathum Thani province, Thailand March 10, 2017. (Photo by Chaiwat Subprasom/Reuters) 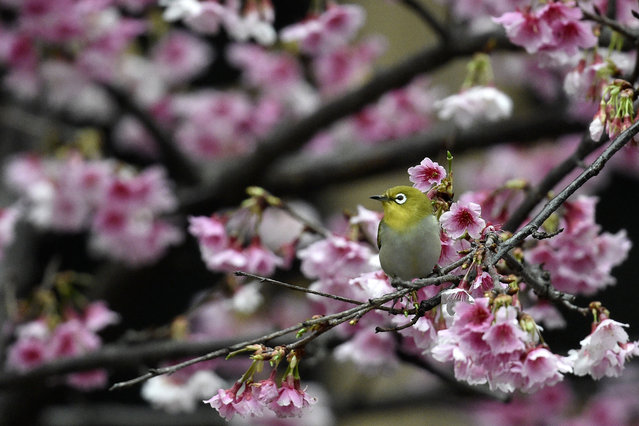 A Japanese White- eye (Zosterops japonicus) sits on a Kanzakura tree in Taipei on March 9, 2017. (Photo by Sam Yeh/AFP Photo) 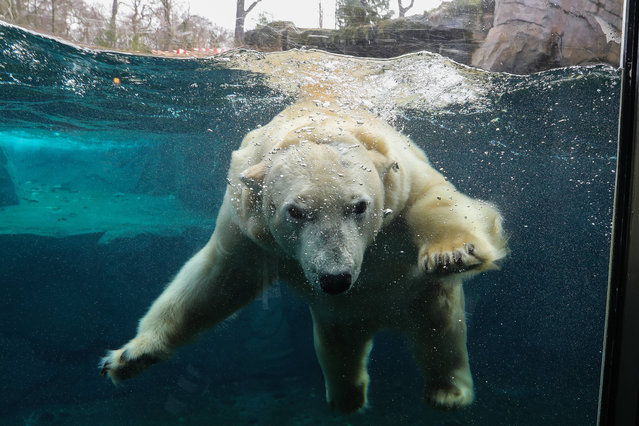 A polar bear enjoys the water in its enclosure at Hanover Zoo on March 9, 2017 in Hanover, Germany. (Photo by Imago/Barcroft Images) 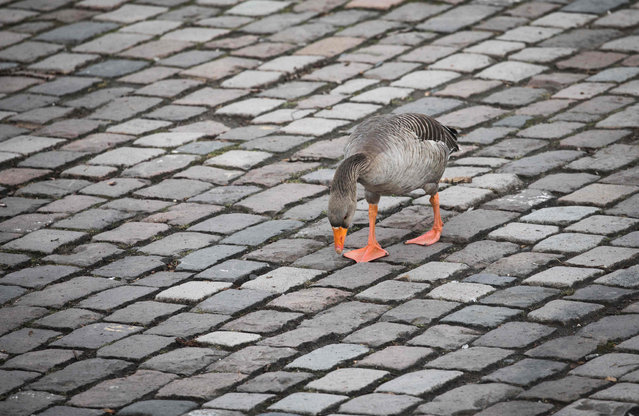 A goose walks along a street, presumably looking for moss inbetween the stones in Frankfurt/ Main, Germany, 7 March 2017. (Photo by Frank Rumpenhorst/DPA) 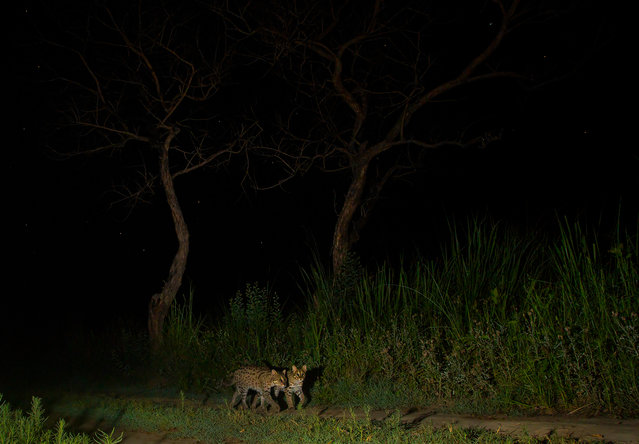 Two fishing cats are caught walking along the track in Terai belt of the Dudhwa Tiger Reserve in March 2017, Uttar Pradesh, India. A one-mile long track in the middle of a Uttar Pradesh jungle is frequently used as a road for animal traffic. Wildlife photographer, Shivang Mehta and his team got together to document and photograph the tigers in the Terai belt of the Dudhwa Tiger Reserve in Uttar Pradesh, India. This particular area of the Terai belt in the reserve has not been documented much. The tigers in this region are hard to spot, shy and mostly nocturnal. Shivang and his team resorted to camera trapping so that they do not disturb the big cats. After researching and following the jungle tracks for two days, the team zeroed in on one small track which ran near a swampland. (Photo by Shivang Mehta/Barcroft Images) 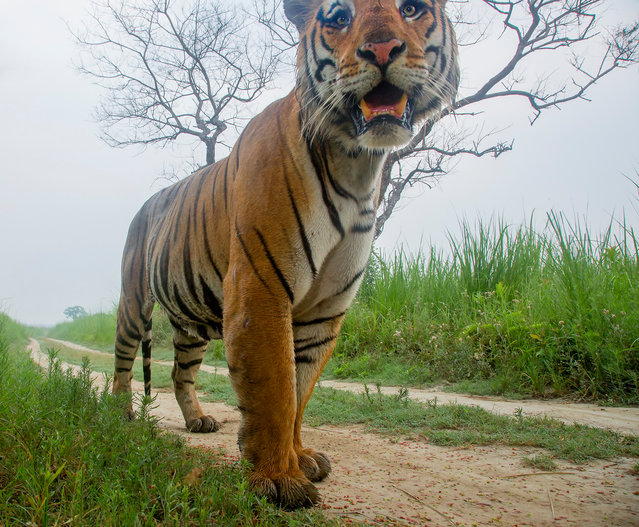 A wild tiger is caught walking along the track in Terai belt of the Dudhwa Tiger Reserve in March 2017, Uttar Pradesh, India. (Photo by Shivang Mehta/Barcroft Images) 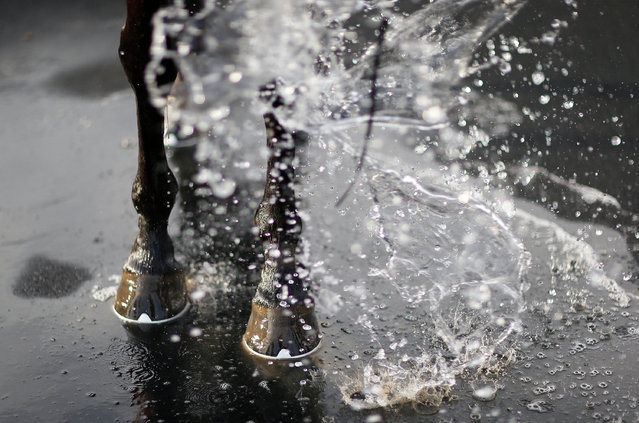 Water is thrown over a runner in the winners enclosure at Wincanton Racecourse on March 9, 2017 in Wincanton, England. (Photo by Alan Crowhurst/Getty Images) 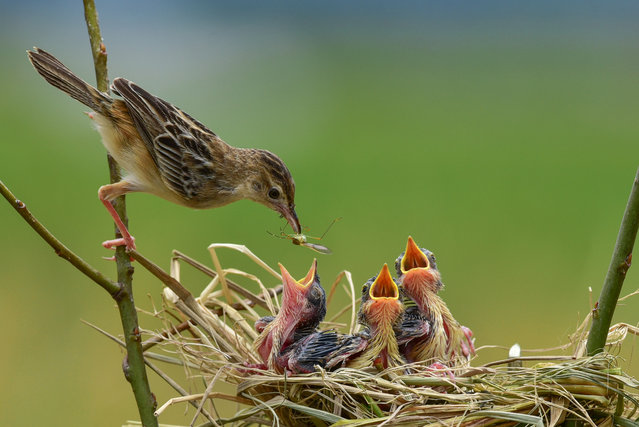 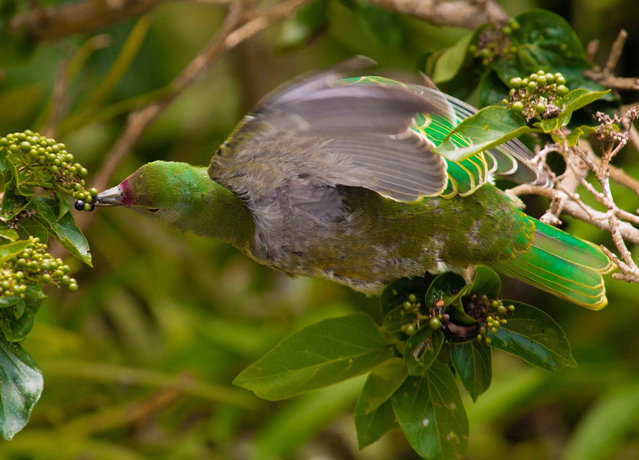 A handout photo provided on March 8, 2017 by Nature shows a Mariana fruit dove (Ptilinopus roseicapilla) eating a fruit from a Premna serratifolia in Saipan in 2013. A non- native snake species that has already wiped out most of Guam' s tree- dwelling birds is also decimating the Pacific island' s forests, researchers said on March 8, 2017. Growth of new trees on the US island territory may have dropped by as much as 92 percent due to the snake' s presence, they reported in the journal Nature Communications. (Photo by Lainie Berry/AFP Photo/Nature Publishing) 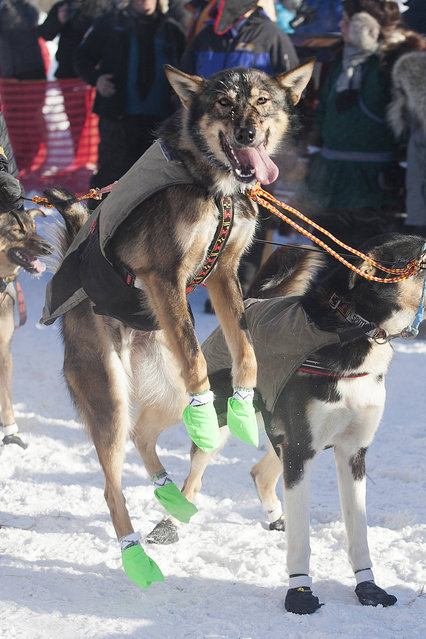 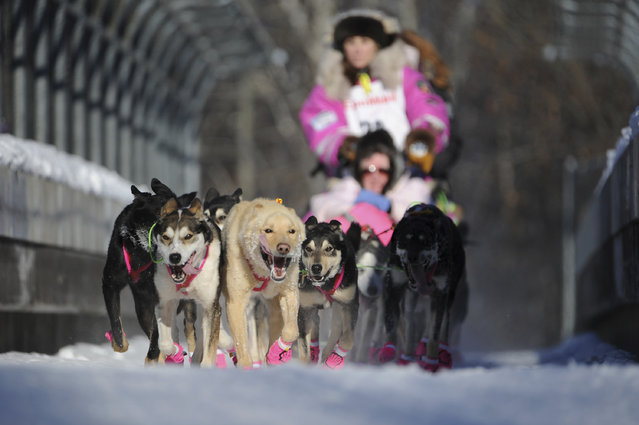 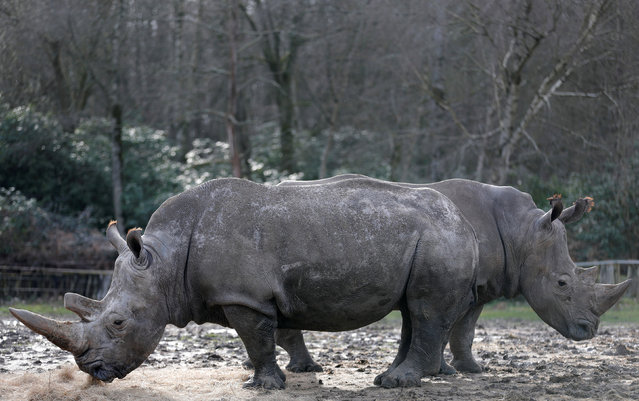 White rhinoceros Bruno (R) and Gracie are seen in their enclosure at Thoiry zoo and wildlife park, about 50 km (30 miles) west of Paris, France, March 7, 2017. Poachers broke into the zoo last night, shot dead four-year-old male white rhino called Vince, and sawed off its horn in what is believed to be the first time in Europe that a rhino in captivity has been attacked and killed. (Photo by Christian Hartmann/Reuters) 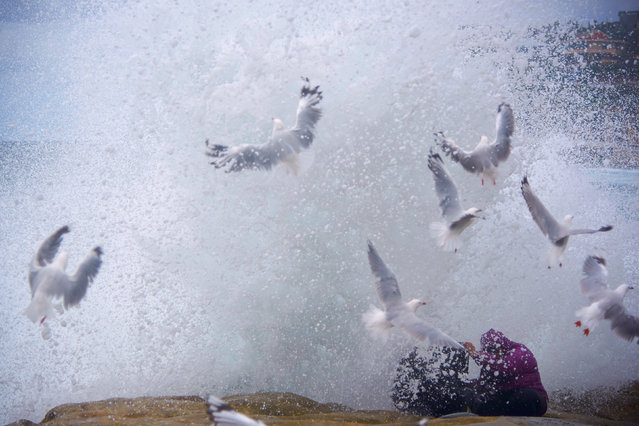 Seagulls and rock-fishing couple, Arie and Zakiyyah Widodo are sprayed by a large wave breaking against the rocks near Sydney's Bronte Beach, Australia, February 26, 2017. (Photo by Aaron Bunch/Reuters) 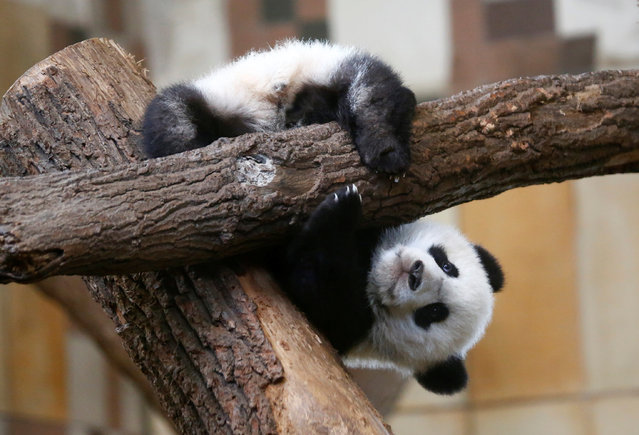 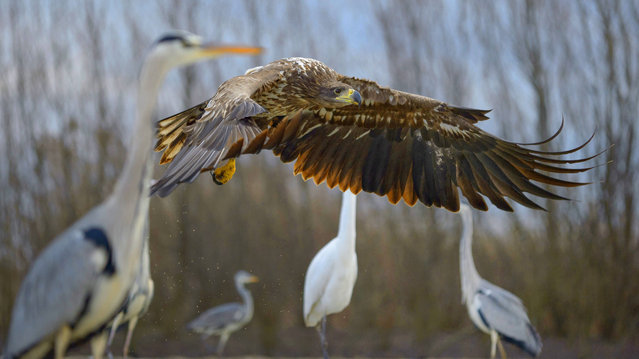 White Tailed Sea Eagle pictured at Kiskunsag National Park, on March 9, 2017 in Szabadszallas, Hungary. Kiskunság National Park is a national park located in Danube–Tisza Interfluve mainly in Bács-Kiskun county, Hungary. It was created in 1975 and declared a biosphere reserve by the UNESCO. (Photo by Imago/Barcroft Images) 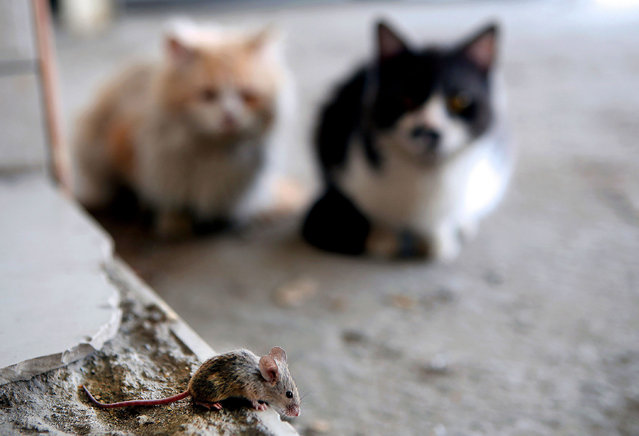 Two cats watch a mouse walking on the pavement in Kuwait City on March 8,2017. (Photo by Yasser Al-Zayyat/AFP Photo) 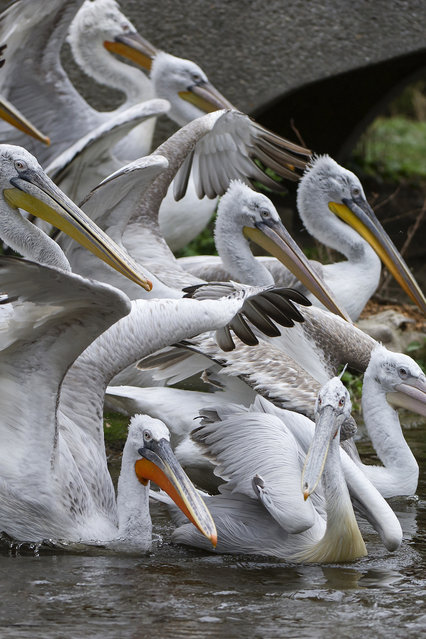 In this undated photo provided by the Schoenbrunn Zoo a flock of pelicans is pictured at the zoo in Vienna, Austria. The zoo has euthanized its flock of 20 Dalmatian pelicans after examinations showed them infected with bird flu. A statement says the birds were put down Friday, March 10, 2017, a day after the first one was found with the disease. (Photo by Daniel Zupanc/Schoenbrunn Zoo via AP Photo) 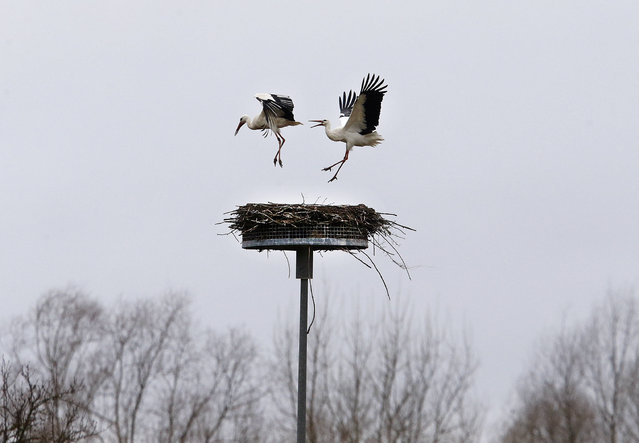 The stork at right chases away another stork from its nest in Biebesheim, south of Frankfurt, Germany, Monday, March 6, 2017. About 30 storks in the area are now looking for the right partner and nest. (Photo by Michael Probst/AP Photo) 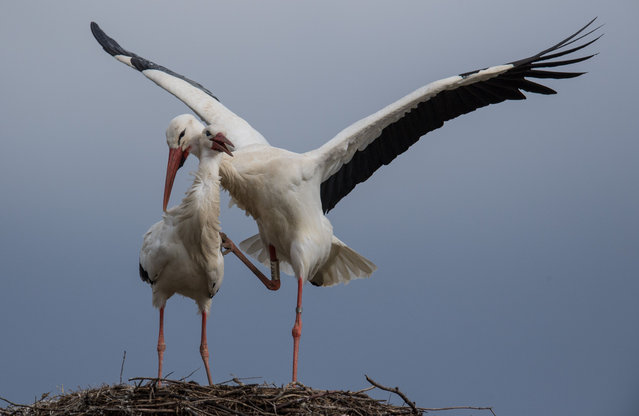 Two white storks copulate in their nest in Biebesheim am Rhein, Germany, 2 March 2017. The male stork climbed onto the female stork. Multiple young storks normally hatch in each nest and travel south with their parents in the late summer. (Photo by Boris Roessler/DPA) 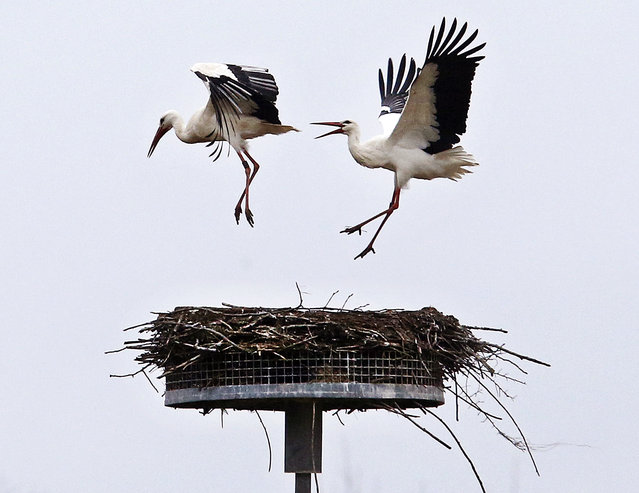 The stork at right chases away another stork from its nest in Biebesheim, south of Frankfurt, Germany, Monday, March 6, 2017. About 30 storks in the area are now looking for the right partner and nest. (Photo by Michael Probst/AP Photo)

Three cheetah cubs go outside for the first time in Beekse Bergen, Hilvarenbeek, on March 9, 2017. Five cubs were born on the first of February. (Photo by Rob Engelaar/AFP Photo/ANP) 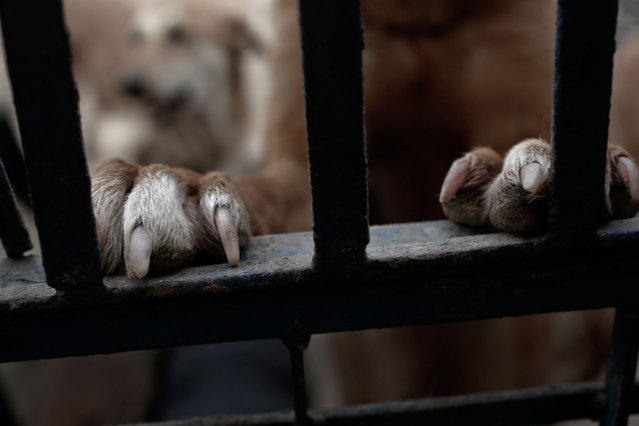 A dogs jumps on bars at the Egyptian Society for Mercy to Animals (ESMA) animal shelter in Saqqara, some 30 kilometers (19 miles) south of Cairo, Egypt, Monday, March 6, 2017. The society is a charitable organization that shelters more than 700 cats and dogs. The shelter has experienced a hit due to the economic situation with increased prices and lack of medical supplies. If donations do not start coming in, the society might be forced to shut down for good. (Photo by Nariman El-Mofty/AP Photo) 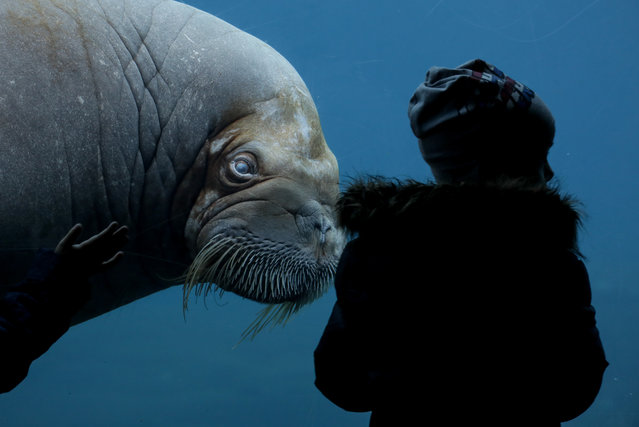 A visitor looks at a walrus (Odobenus rosmarus) on March 6, 2017 in a zoo Hamburg. (Photo by Axel Heimken/AFP Photo/DPA) 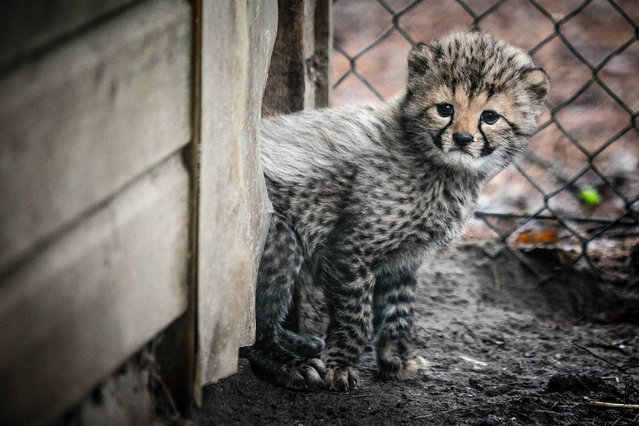