An eagle owl holds a little dead bird in his beak at his enclosure in a park in Essen, Germany, Tuesday, September 11, 2018. (Photo by Martin Meissner/AP Photo) 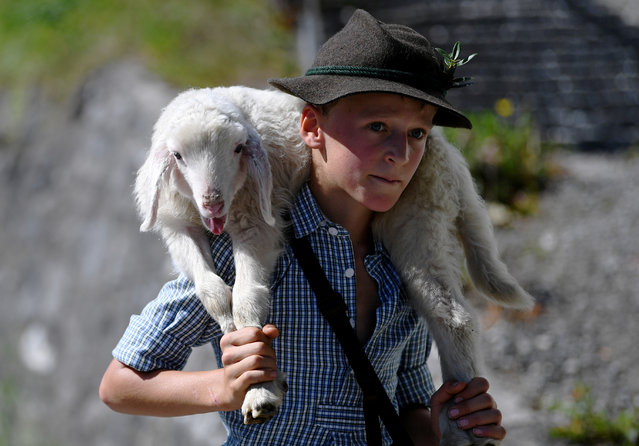 A boy carries a little sheep from its summer pastures in the mountains down to the valley and through the town of Mittenwald during the traditional “Almabtrieb” in Mittenwald, Germany, September 8, 2018. (Photo by Andreas Gebert/Reuters) 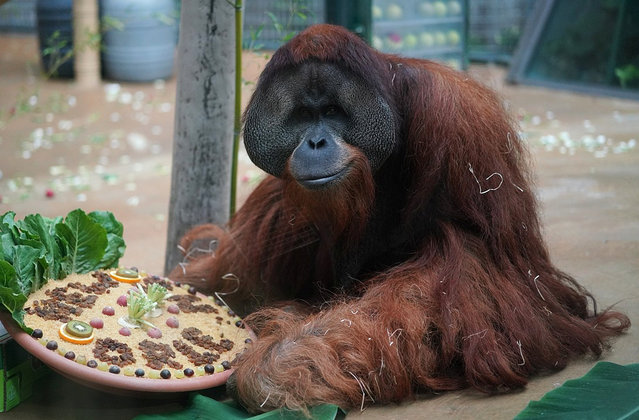 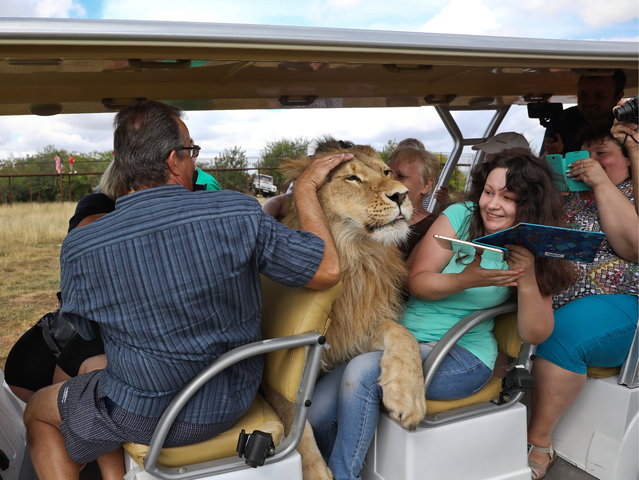 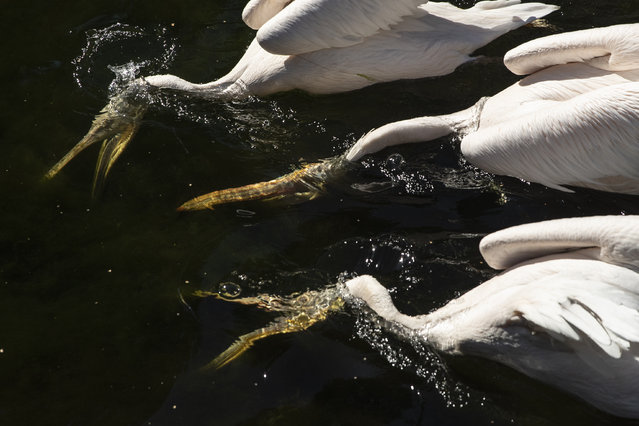 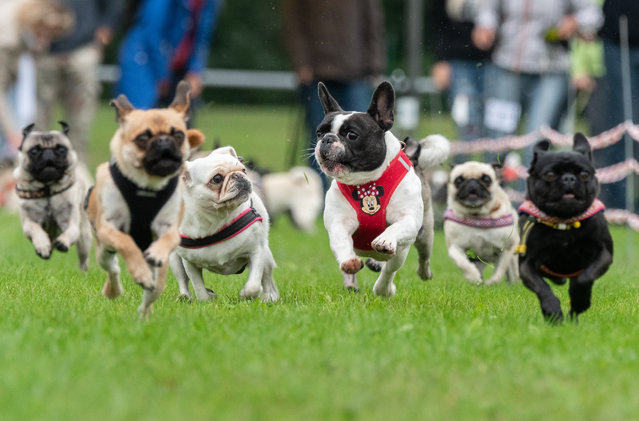 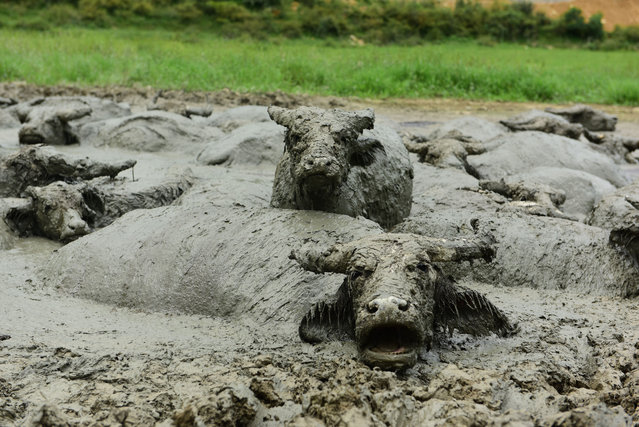 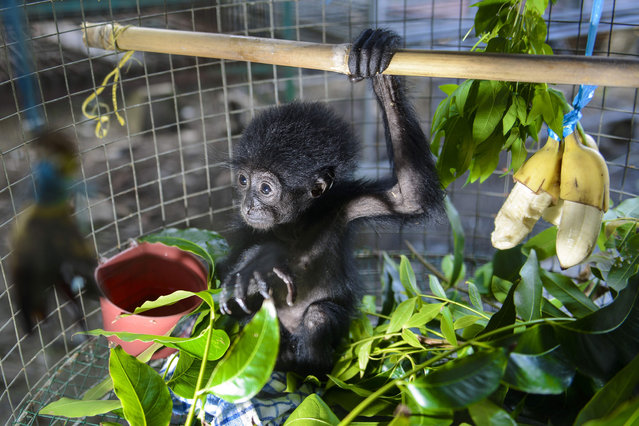 A rescued baby black gibbon (symphalangus syndactylus) is seen in an enclosure at a local nature conservation agency' s office in Banda Aceh, Aceh province on September 13, 2018. A local nature conservation agency seized the two month- old siamang, or black- furred gibbon, from a villager suspected of being an animal trader. Siamangs are listed as 'endangered' in the International Union for Conservation of Nature (IUCN) Red List. (Photo by Chaideer Mahyuddin/AFP Photo) 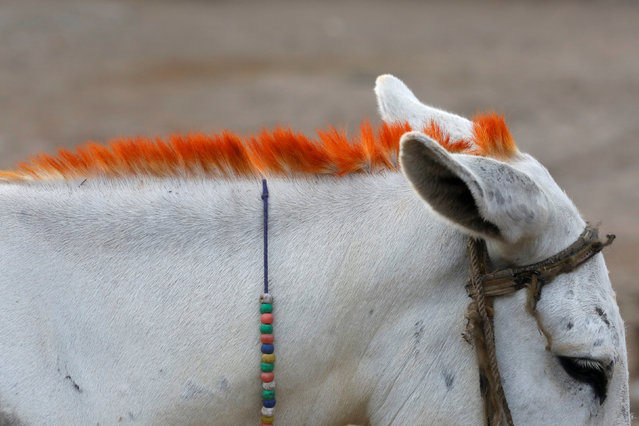 A donkey with a henna dyed mane, for decorative purposes, is seen in a low-income neighbourhood in Karachi, Pakistan September 12, 2018. (Photo by Akhtar Soomro/Reuters) 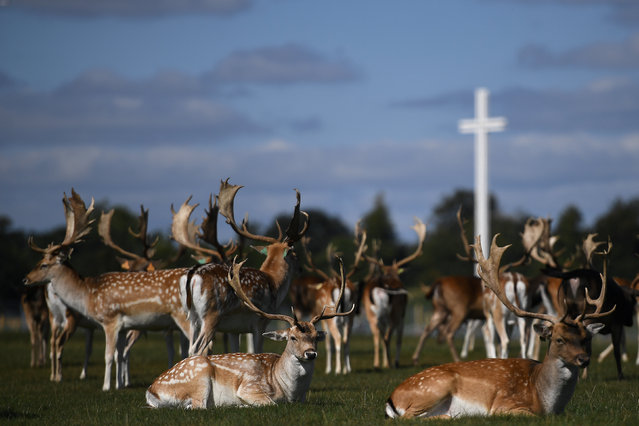 Deer rest in front of the Papal cross during sunny weather at the Phoenix Park in Dublin, Ireland, September 4, 2018. (Photo by Clodagh Kilcoyne/Reuters) 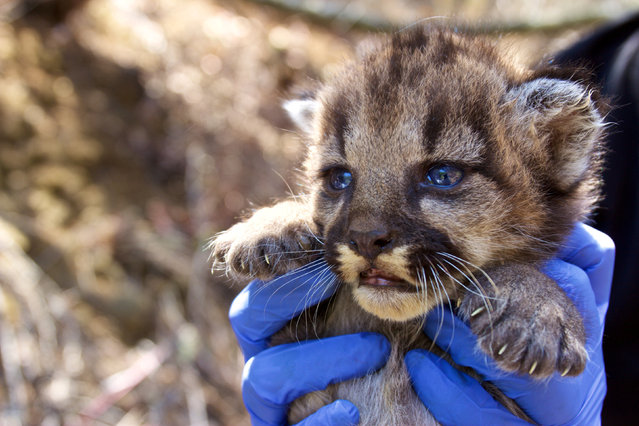 A mountain lion kitten which National Park Service researchers discovered in August 2018 in a remote area of the Santa Monica Mountains, California, U.S. is shown in this image released on September 4, 2018. (Photo by Courtesy National Park Service/Handout via Reuters) 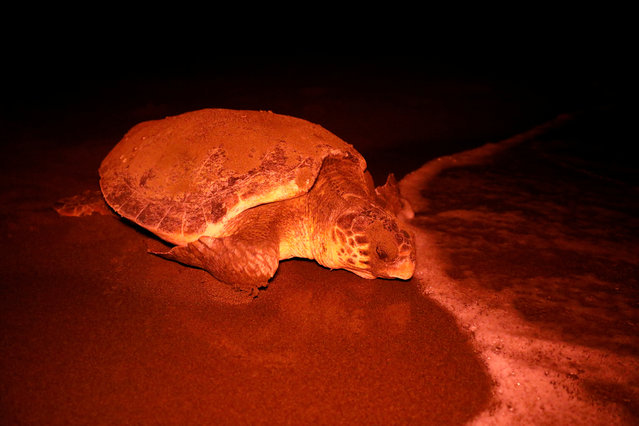 A sea turtle returns to the sea after laying eggs at Iztuzu Beach near Dalyan in Mugla province, Turkey on September 4, 2018. (Photo by Umit Bektas/Reuters) 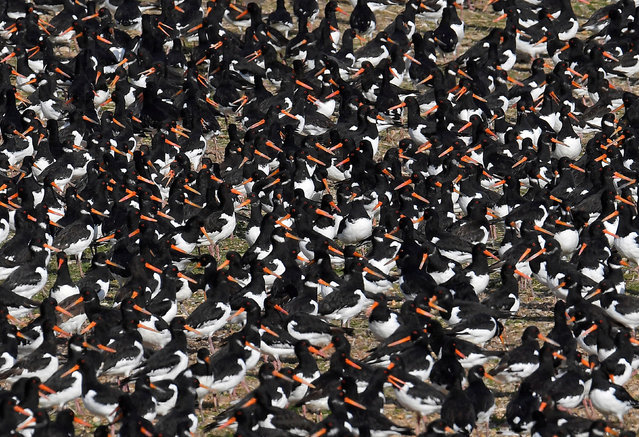 Thousands of wading birds including Oystercatchers fly onto dry sandbanks during the month's highest tides at The Wash estuary, near Snettisham in Norfolk, Britain, September 13, 2018. (Photo by Toby Melville/Reuters) 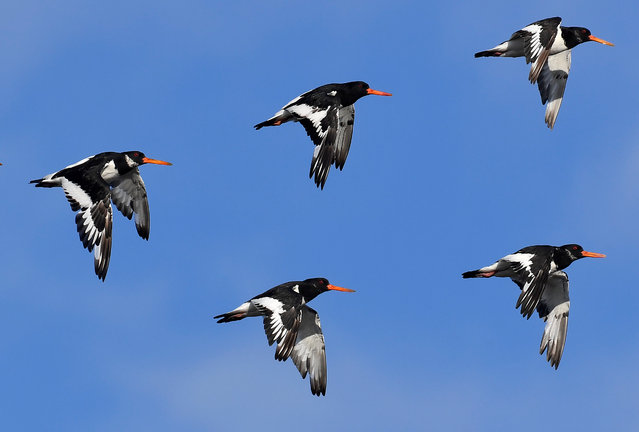 Thousands of wading birds, including Oystercatcher, fly onto dry sandbanks during the month's highest tides at The Wash estuary, near Snettisham in Norfolk, Britain, September 13, 2018. (Photo by Toby Melville/Reuters) 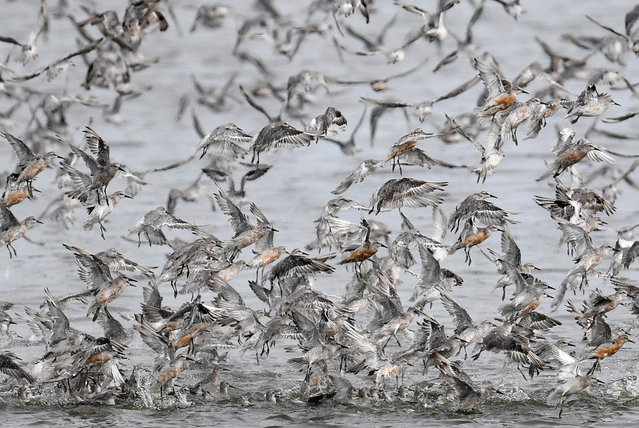 Thousands of wading birds, including Knot, fly onto dry sandbanks during the month's highest tides at The Wash estuary, near Snettisham in Norfolk, Britain, September 13, 2018. (Photo by Toby Melville/Reuters) 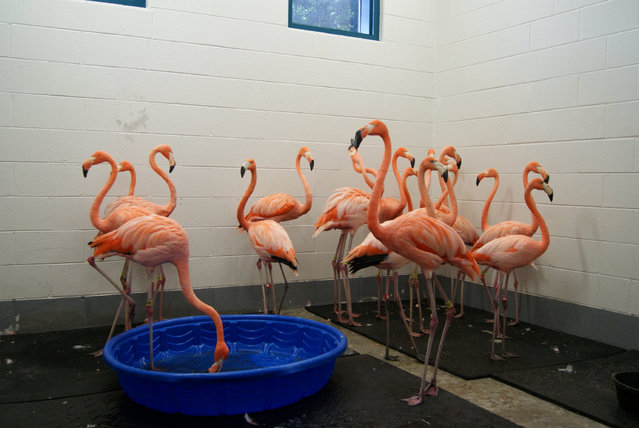 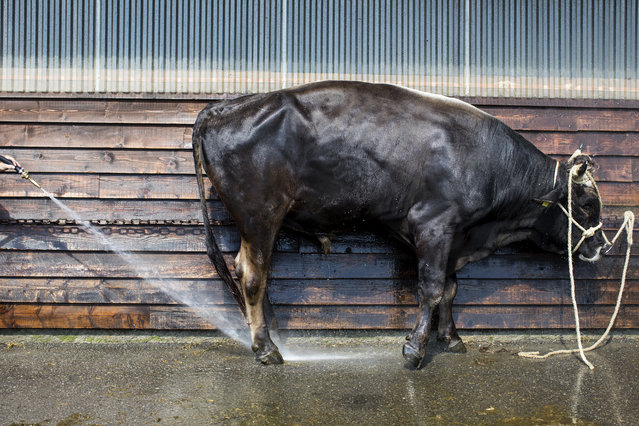 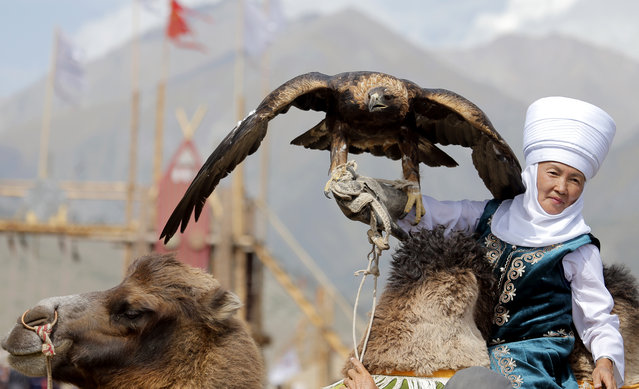 People take part during the 3rd World Nomad Games at Issyk-Kul lake in gorge “Kyrchyn”, 300km from Bishkek, Kyrgyzstan, 06 September 2018. Teams from 66 countries are competing in the ethnic sport games during the cultural event that runs from 02 to 08 September. The mission of the Games is to promote the revival and preservation of the historical heritage of the nomadic peoples of the world civilization. (Photo by Igor Kovalenko/EPA/EFE) 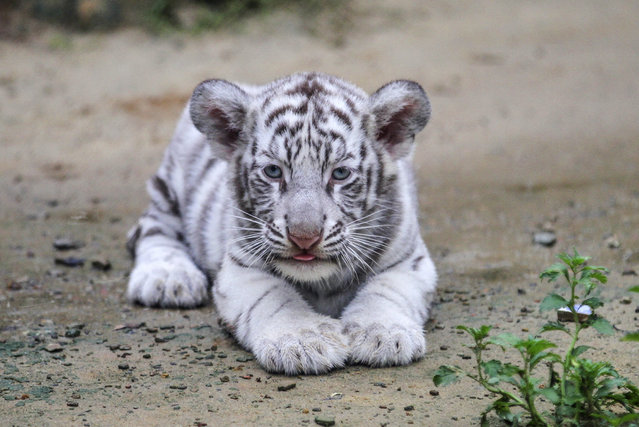 This photo taken on September 12, 2018 shows a white albino Bengal tiger cub at a zoo in Bangladesh's second largest city Chittagong. The zoo authorities reported is was first white tiger born and being bred at a Bangladeshi zoo. (Photo by Habibur Rob/AFP Photo) 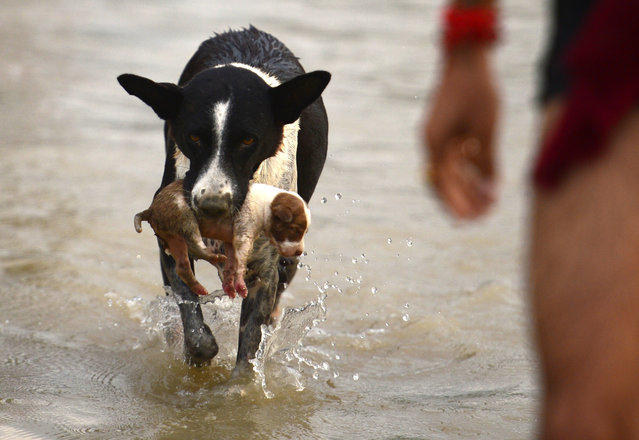 A b*tch transfers a puppy to a drier place at Sangam area in Allahabad on September 3, 2018, as water levels of the Ganges and Yamuna rivers increase following monsoon rains. (Photo by Sanjay Kanojia/AFP Photo) 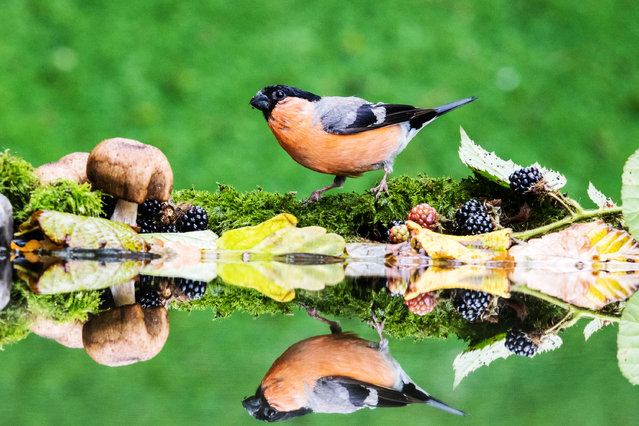 A striking male bullfinch (Pyrrhula pyrrhula) visits a garden pool in early autumn in mid Wales, UK on September 2, 2018. The birds were attracted by some food to visit the pool in my garden. There was a deluge of great tits and blue tits but this striking male bullfinch stood out today. The bullfinch is in decline in the UK. (Photo by Phil Jones/Alamy Live News) 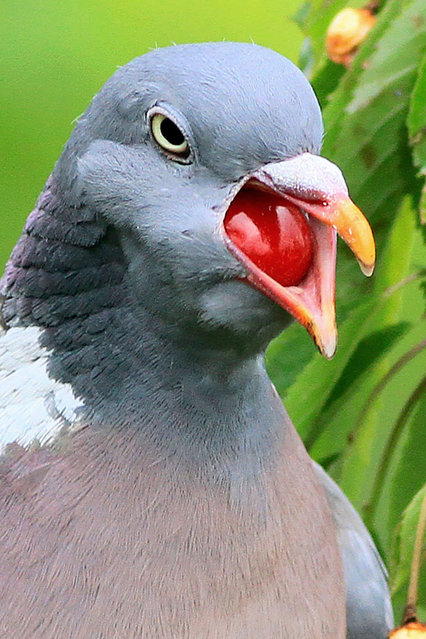 A pigeon eating cherries in Bydgoszcz, Poland on September 14, 2018. The pigeon was captured at dinnertime, as he was caught on camera with its mouth full of a cherry. (Photo by Piotr Grny/Caters News Agency) 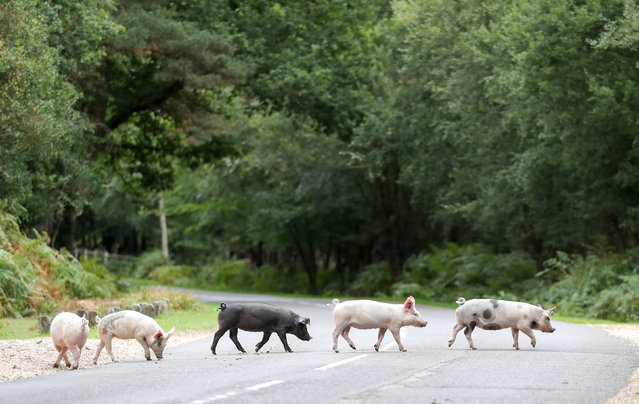 Domestic pigs roam the roadside near to Burley in Hampshire, on the first day of Pannage, or “Common of mast”, where the animals are allowed to wander in the New Forest during a set time in the Autumn to feast on the acorns that have fallen, which in large quantities are dangerous for the ponies and cattle. Picture date: Monday September 10, 2018. This year's pannage season runs from September 11th to November 11th. (Photo by Andrew Matthews/PA Wire)
Edit Del
16 Sep 2018 00:03:00, post received 0 comments
Publication archive:
←   →
Popular tags:
All tags
Last searches: