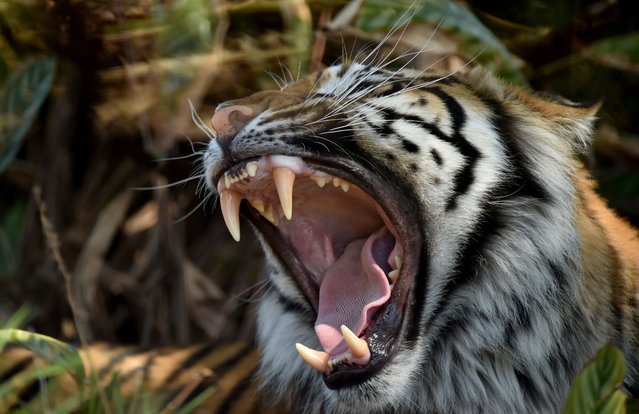 A 5-year-old male Sumatran tiger is seen yawning in Taronga Zoo in Sydney on September 13, 2017. Taronga Zoo has four Sumatran tigers, part of a conservation breeding program for this critically endangered species of which only around 500 exist in the wild in Indonesia. (Photo by Peter Parks/AFP Photo) 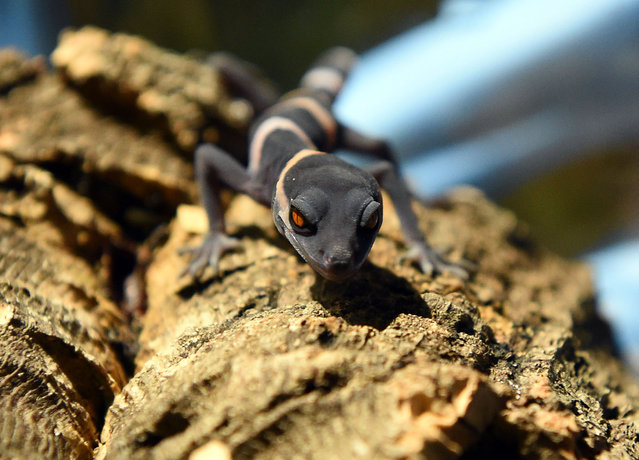 A young Chinese tiger gecko in a zoo in Cologne, Germany, 14 September 2017. The species was first discovered in 1999 before being promptly hunted into extinction by poachers in China. The location of newly discovered species is now kept secret as a result of the experience. (Photo by Henning Kaiser/DPA/Bildfunk) 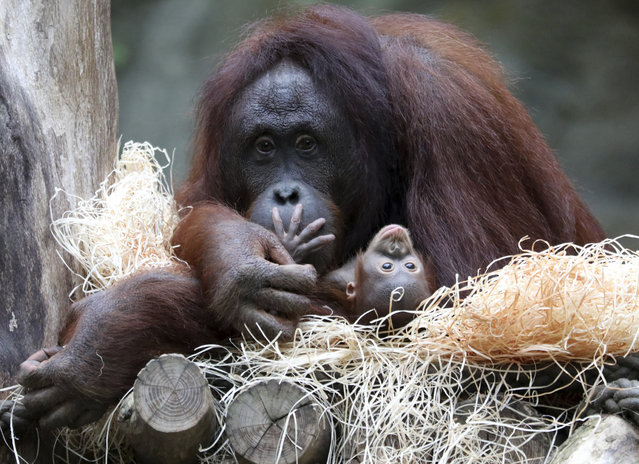 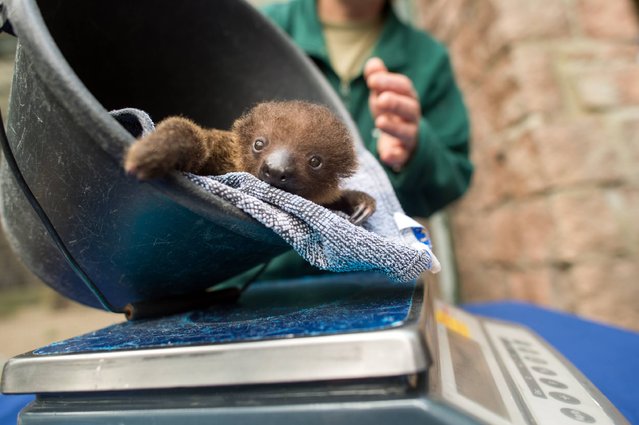 A young sloth sits in a bucket at the Bergzoo zoo in Halle an der Saale, eastern Germany, on September 12, 2017. The two-toed sloth baby was born at the zoo on August 5, 2017. (Photo by Klaus-Dietmar Gabbert/AFP Photo/DPA) 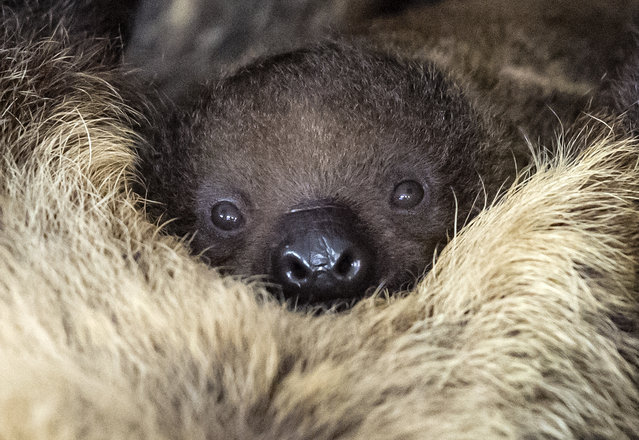 A baby sloth relaxes near the mother Charlotte at the zoo in Halle (Saale), central Germany, Tuesday, September 12, 2017. The baby, whose gender is not yet known, was born on Sept. 5, 2017, and weighs 586 grams. (Photo by Jens Meyer/AP Photo) 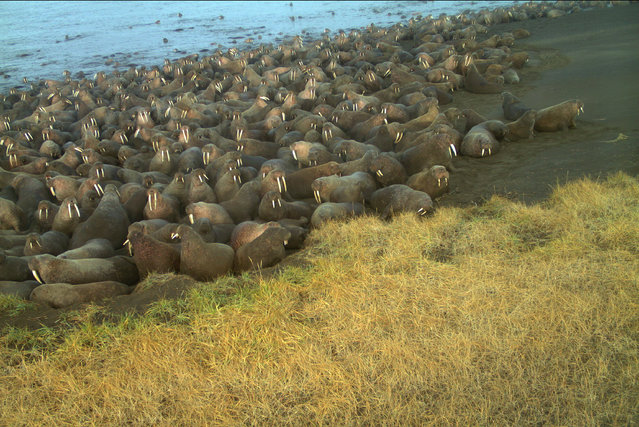 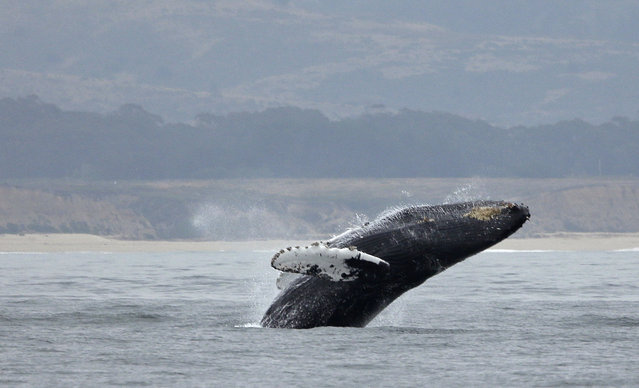 In this Monday, August 7, 2017 photo, a humpback whale breeches off Half Moon Bay, Calif. California’s Dungeness crab season has ended but the fishermen who go after Dungeness are back at sea. Commercial fishermen at Half Moon Bay and five other California ports this year are using cellphone GPS to help recover abandoned crabbing gear that can snare and kill whales. (Photo by Eric Risberg/AP Photo) 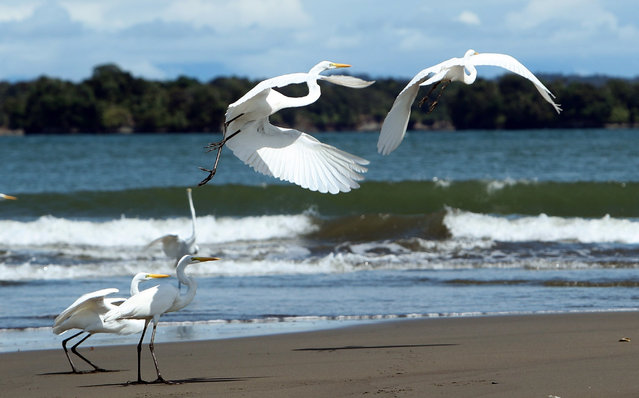 A view of a flock at a beach in Ladrilleros, Cauca Valley, Colombia, 14 September 2017. Colombian President Juan Manuel Santos declared 4.5 million hectares at the Pacific Oceans as protected maritime area, a measure that includes Malpelo's Wildlife Sanctuary, which is part of the UNESCO's World Heritage. (Photo by Mauricio Duenas Castaneda/EPA/EFE) 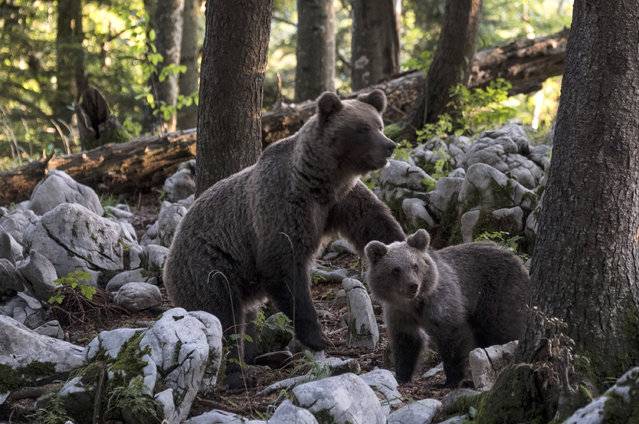 A brown bear with cub forages on September 14, 2017 in Ljubljana, Slovenia. Over 400 Dinaric Brown bears live in the forests of the Notranjska and Kocevska, only 30km from the 280,000 people who inhabit the Slovenian capital city Ljubljana. This breed of bear has been used to repopulate areas of Italy and Spain after they became extinct and whilst Italy has recently experienced bear attacks, in Slovenia they are rare. (Photo by Marco Secchi/Getty Images) 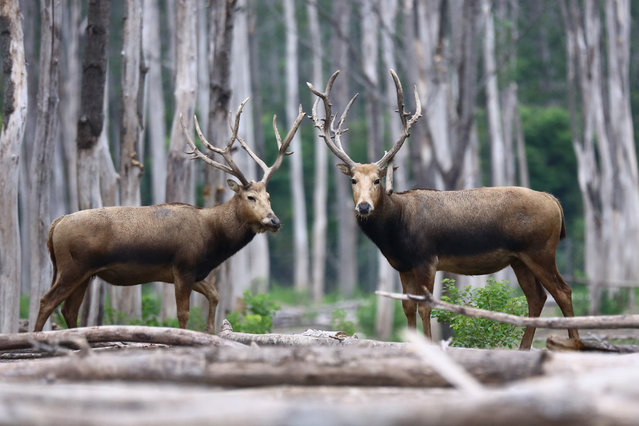 Elks are seen at the Dafeng National Nature Reserve for Elk in Yancheng City, east China's Jiangsu Province, September 3, 2017. The nature reserve has seen its number of elks increasing from only 39 in 1986 to more than 4,100 this year. (Photo by Han Hua/Xinhua/Barcroft Images) 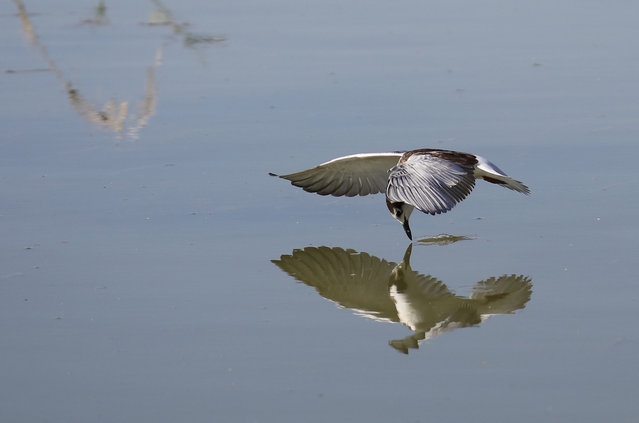 Flamingos are seen on the lake of Ercek in Van, Turkey on September 4, 2017. (Photo by Ali Ihsan Ozturk/Anadolu Agency/Getty Images) 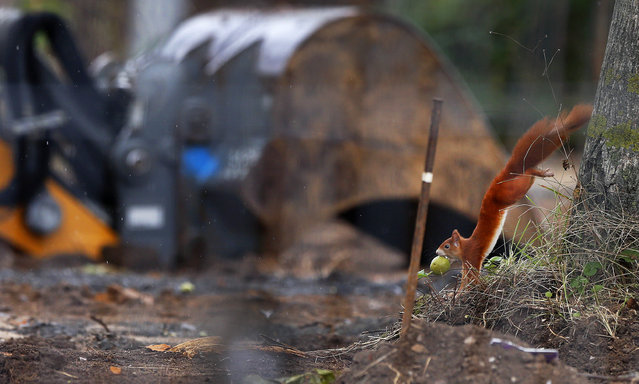 A squirrel with an apple in its mouth jumps down from a tree next to a excavator shovel where an unexploded 1.8 tons WW II bomb was found in Frankfurt, Germany, Saturday, September 2, 2017. The bomb is supposed to be defused on Sunday, 70 000 people have to be evacuated. (Photo by Michael Probst/AP Photo) 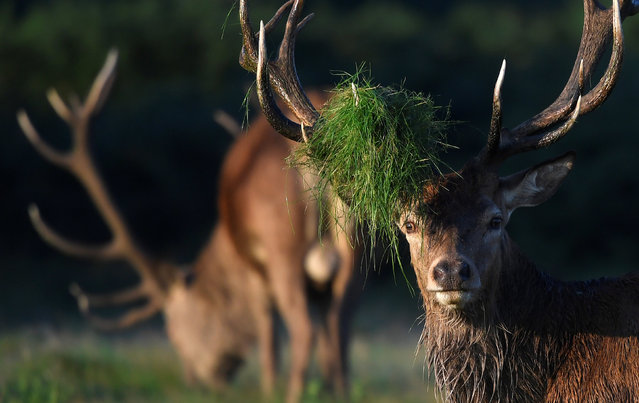 A stag deer with undergrowth on its antlers in Richmond Park, London on September 7, 2017. (Photo by Toby Melville/Reuters) 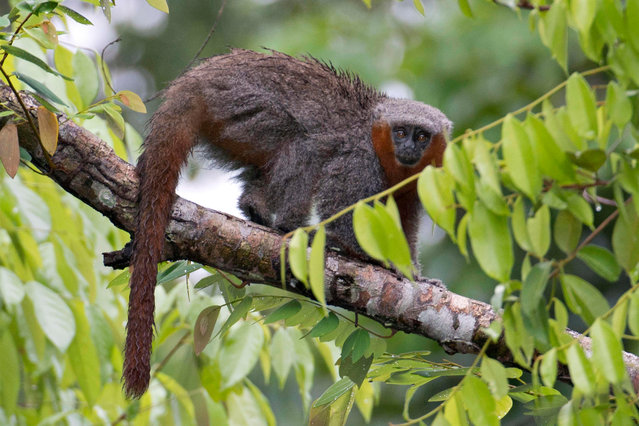 Undated handout picture taken at an undisclosed location released by WWF Brazil on August 30, 2017 showing a specimen of primate Calicebus miltoni which was included in the 2014-2015 Report of New Species of Vertebrates and Plants of the Amazon. A total of 381 new species, including 216 plants, 93 fish, 32 amphibians, 19 reptiles, 1 bird, 20 mammals and 2 fossils were described in the research carried out by the Living Amazon Initiative of the WWF Network and the Mamiraua Sustainable Development Institute (IDSM). (Photo by Adriano Gambarini/AFP Photo/WWF Brazil) 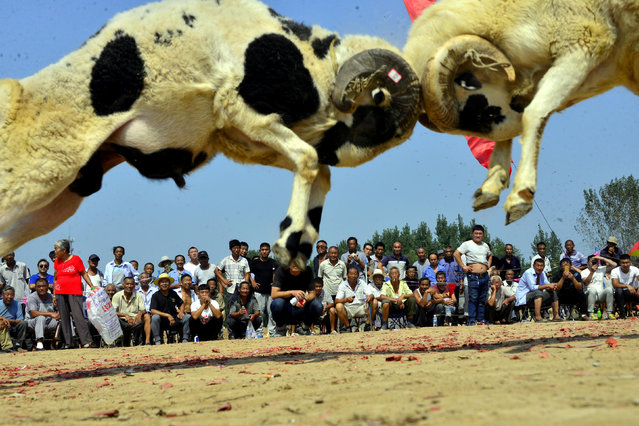 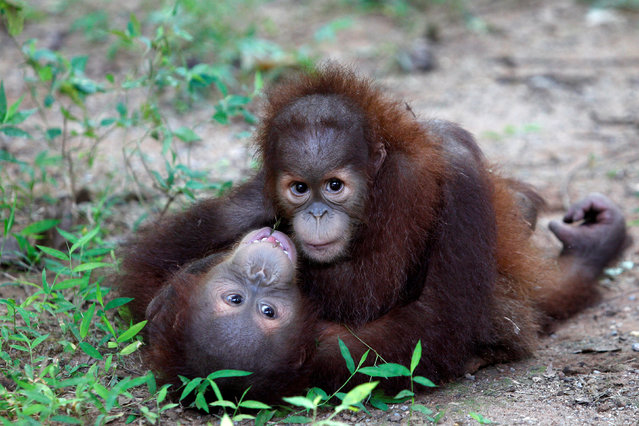 Two baby Sumatran orangutans rescued by border officials who foiled a bid to smuggle them into Thailand play after arriving at a wildlife center at Ratchaburi province in Thailand September 13, 2017. (Photo by Kerek Wongsa/Reuters) 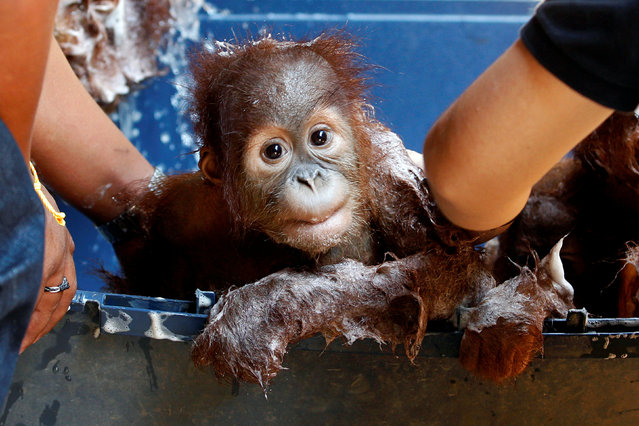 A baby Sumatran orangutan is bathed after arriving at a wildlife center at Ratchaburi province in Thailand September 13, 2017. (Photo by Kerek Wongsa/Reuters) 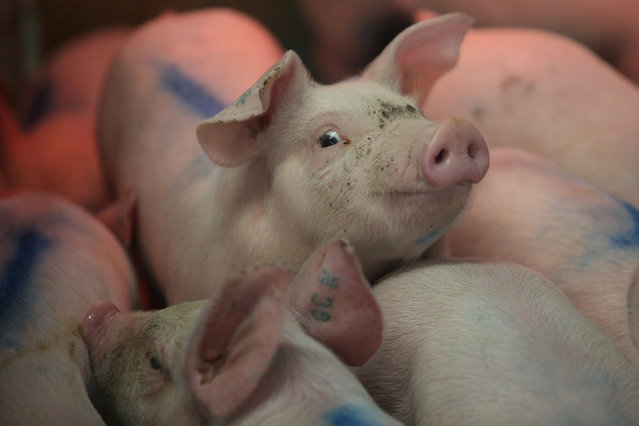 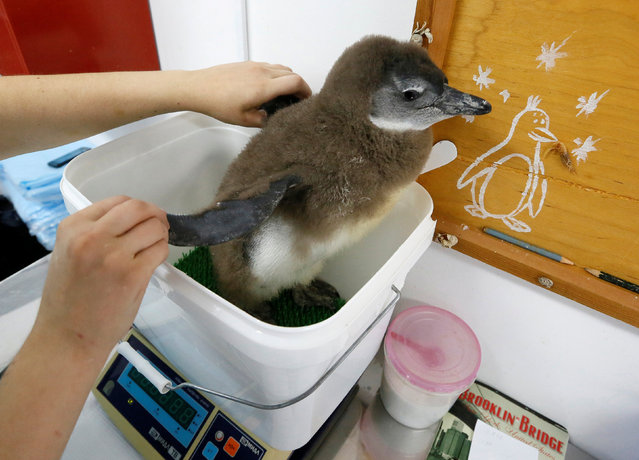 Zoo keeper Darya Zhirnova weighs a two-month-old African penguin chick at the Royev Ruchey zoo in a suburb of the Siberian city of Krasnoyarsk, Russia September 15, 2017. (Photo by Ilya Naymushin/Reuters) 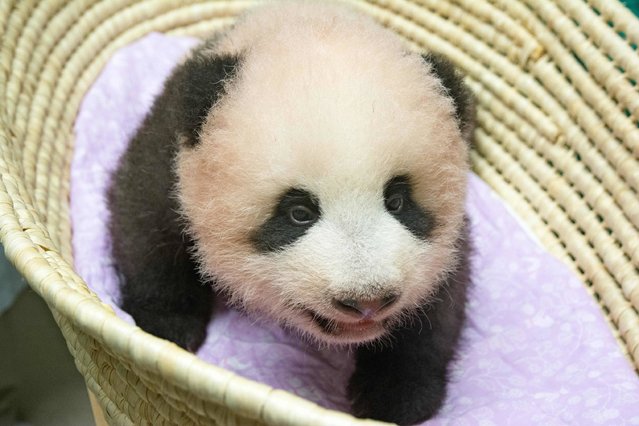 This handout from the Tokyo Zoological Park Society taken on September 10, 2017 and released on September 12 shows Ueno Zoo's 90-day-old female baby giant panda in Tokyo. The rare birth of the panda in June triggered a frenzy of media and public excitement in Japan, with businesses keen to cash in. (Photo by AFP Photo/Tokyo Zoological Park Society) 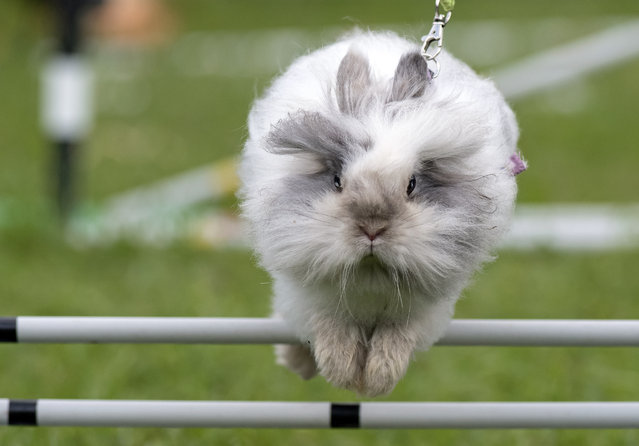 A rabbit jumps at the warm-up course during a regional Kaninhop (rabbit-jumping) competition in Weissenbrunn vorm Wald, Germany, Sunday, September 3, 2017. Competitors take part in four different categories, with an obstacle height ranging between 25 and 50 centimeters. (Photo by Jens Meyer/AP Photo) 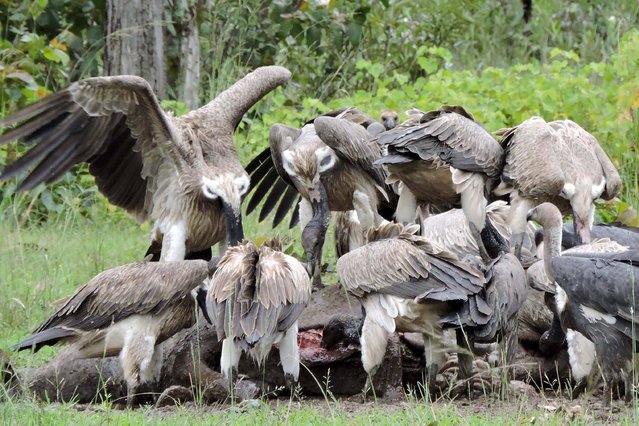 This handout photograph taken on July 20, 2017 and released by Birdlife International on September 4, 2017 shows a flock of vultures feeding on an animal carcass provided by conservationists at a “vulture restaurant”, where observers can view the feasting birds from hides, at the Siem Pang Kang Lech Wildlife Sanctuary in Stung Treng province. Cambodia's vultures have seen a 50 percent decline in number from the late 2000s, with only 121 of the birds recorded in this year's national census, the lowest number on record since 2003. Recent reviews indicate that poisoning is the major threat to the country's vulture population. (Photo by AFP Photo/APA/Birdlife International) 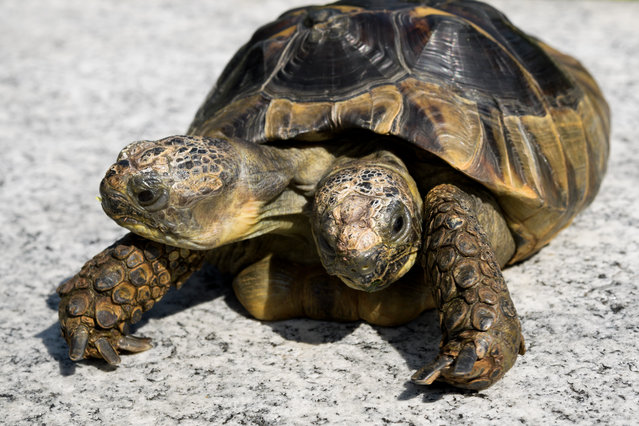 Janus, the Geneva Museum of Natural History's two-headed Greek tortoise, is photographed on the day of its 20th birthday, on September 3, 2017, in Geneva. Janus, named after the two-headed Roman god, was born on September 3, 1997 at Geneva's Natural History Museum from an egg that had been placed in an incubator. With two heads, the animal would not have survived in nature, but thanks to the attentive care of the museum, the tortoise has beat the previous records of longevity of a turtle with two heads in captivity, that lived only a few years. The star is pampered, enjoying a daily bath and pleasant sessions of UV allowing it to consolidate its shell thanks to an adequate level of vitamin D. (Photo by Fabrice Coffrini/AFP Photo) 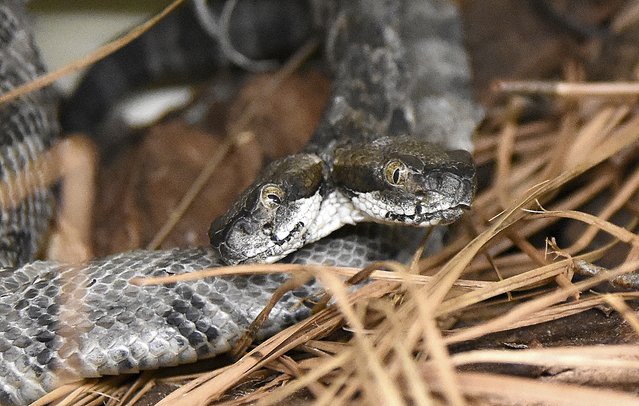 A two-headed timber rattlesnake moves across a bed of pine needles in its new home Thursday, September 14, 2017, at Arkansas State University in Jonesboro, Ark. The Jonesboro Sun reports the snake is 2 weeks old and 11 inches long. A Woodruff Electric worker found the snake outside a home last week on Arkansas 248. It was first taken to the Forrest L. Wood Crowley's Ridge Nature Center before finding a permanent home at ASU. (Photo by Staci Vandagriff/The Jonesboro Sun via AP Photo) 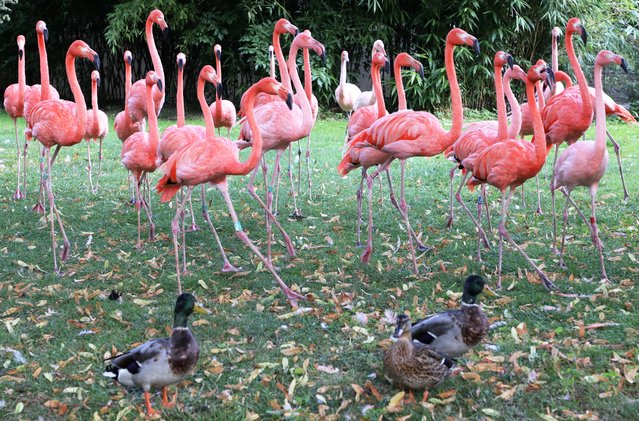 Ducks stand next to pink flamingos on September 11, 2017, in the Jardin des Plantes in Paris. (Photo by Ludovic Marin/AFP Photo) 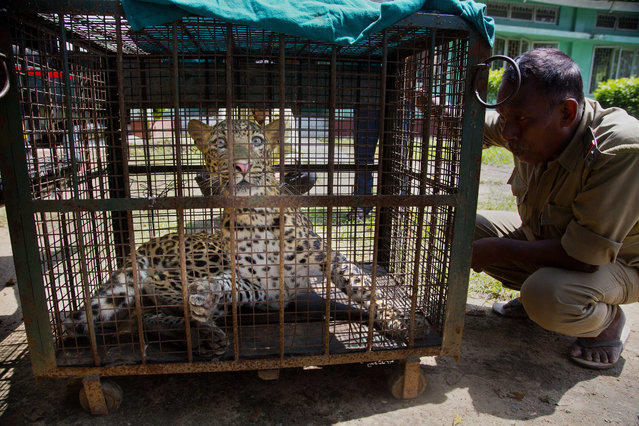 An Indian forest guard looks at a leopard they tranquilized and captured from a residence after it was brought in a cage to the state zoological park in Gauhati, Assam state, India, Wednesday, September 13, 2017. The full grown male leopard entered a residence early Wednesday morning. Conservationists say deforestation is increasingly pushing leopards into populated areas. (Photo by Anupam Nath/AP Photo) 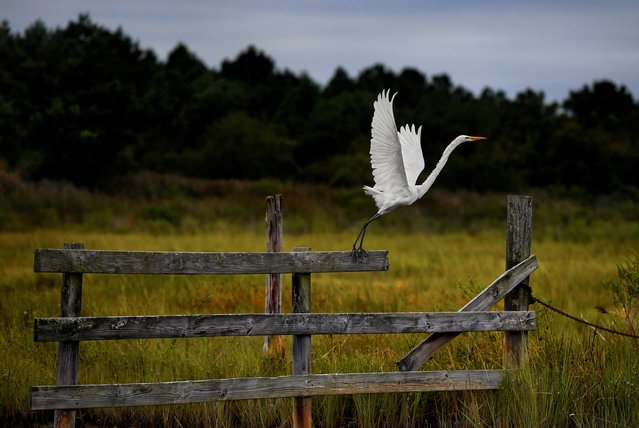 A great egret leaves its perch under threatening skies at the small enclave of Fishing Creek on Hooper’s Island in Dorchester County, Md. on September 2, 2017. (Photo by Michael S. Williamson/The Washington Post) 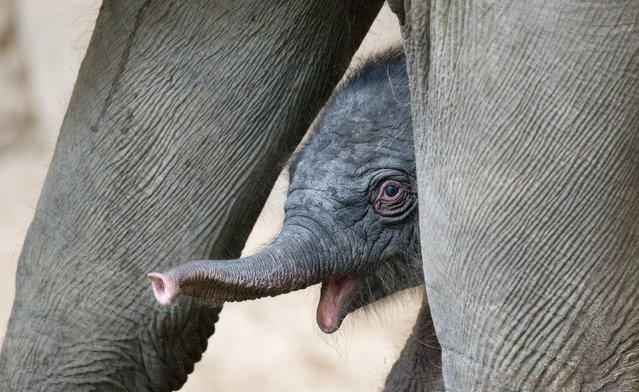