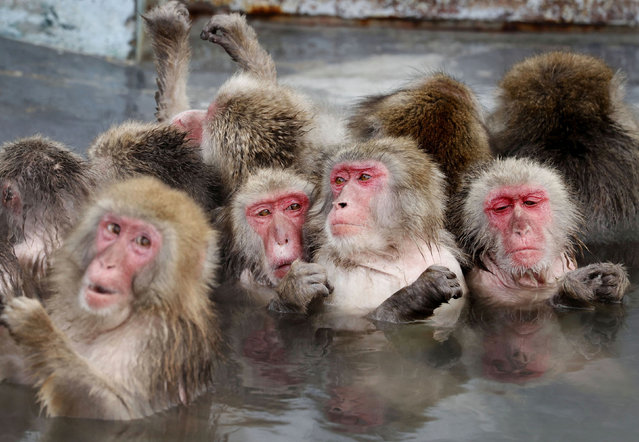 Japanese macaques soak in a hot spring at the Hakodate Tropical Botanical Garden in Hakodate on Japan's northernmost main island of Hokkaido on January 12, 2021. (Photo by Kyodo News via Reuters) 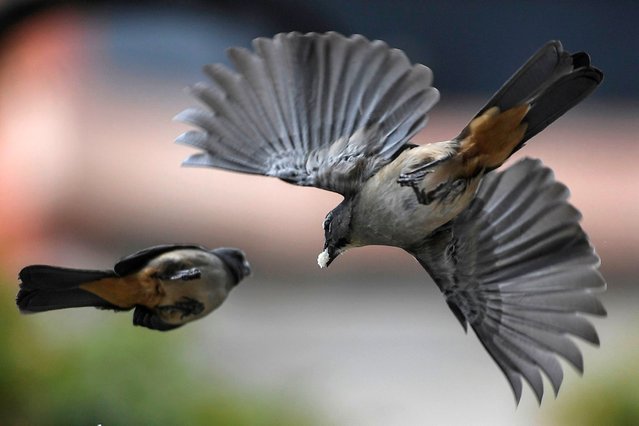 A bird of the Lechosero Ajicero species (Saltador coerulescens) flies carrying food in its beak during a rainy morning in Caracas, Venezuela on January 2, 2021. (Photo by Yuri Cortez/AFP Photo) 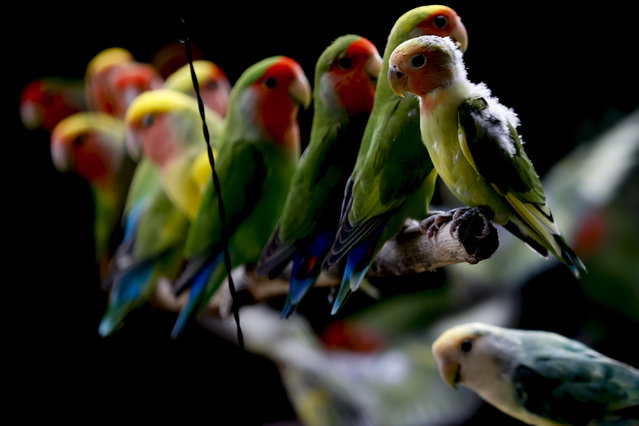 Colorful lovebirds are seen at Antalya Zoo hosting 1,500 animals from 135 different species and 185 parrots from 15 species, in Antalya, Turkey on January 4, 2021. Parrots taken from different zoos and brought to the country illegally or seized by the relevant institutions because they do not have a certificate also live in the zoo. (Photo by Mustafa Ciftci/Anadolu Agency via Getty Images) 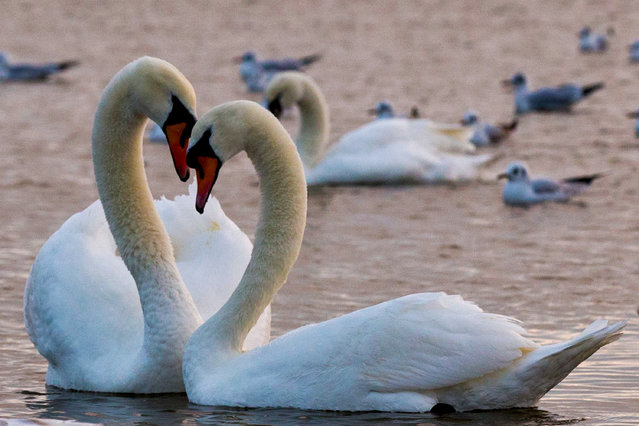 Swans are on Lake Sasyk in Yevpatoriya, Crimea, Russia on January 3, 2021. The salt lake is the largest lake on the Crimean Peninsula. Its length is 14 km, width is up to 9 km and depth is up to 1.2 m. (Photo by Sergei Malgavko/TASS) 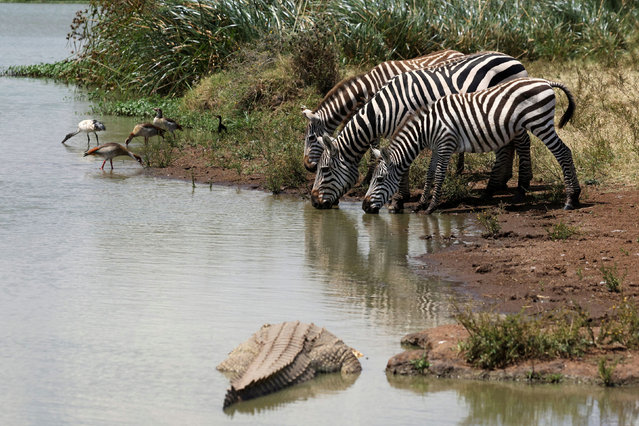 Zebras drink from a water hole while a crocodile looks by inside the Nairobi National Park, Kenya on January 6, 2021. (Photo by Baz Ratner/Reuters) 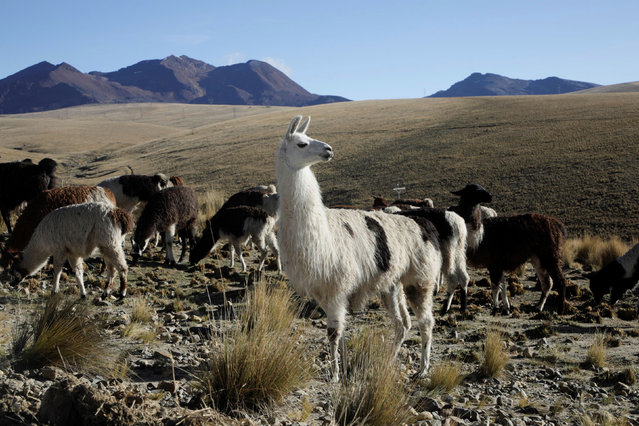 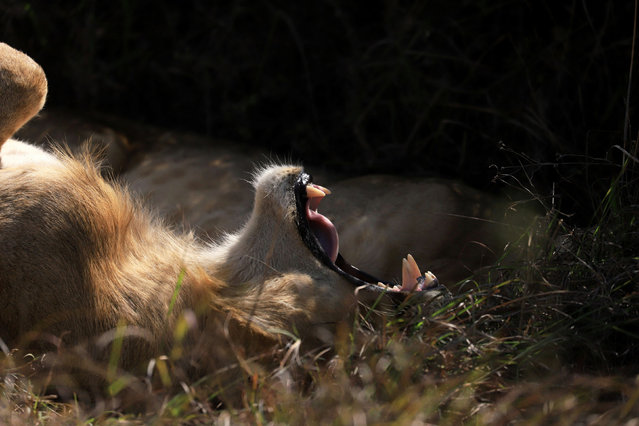 A lion rests in the Nairobi National Park, Kenya on January 6, 2021. (Photo by Tiksa Negeri/Reuters) 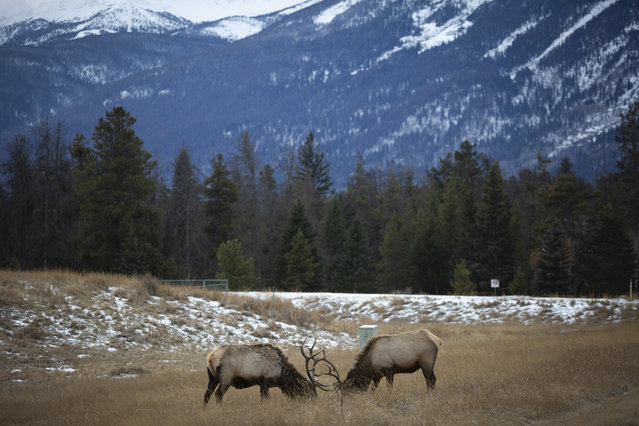 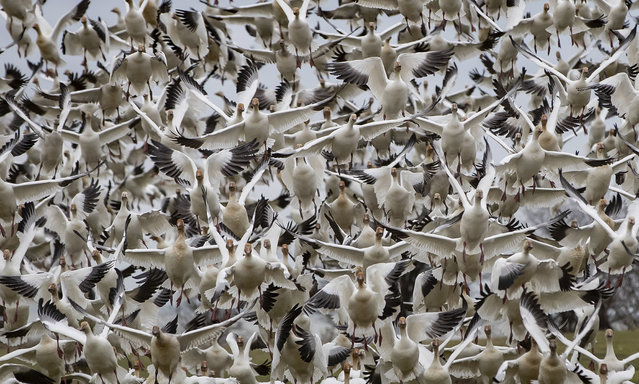 Snow geese take to the air at Garry Point Park, in Richmond, British Columbia, on Sunday, January 10, 2021. The geese, which breed in Siberia, migrate along the pacific coast to spend winter feeding in river estuaries in southern B.C., Washington, and northern California. The B.C. Ministry of Environment estimates 100,000 of the birds reside in the Fraser River Delta every winter. (Photo by Darryl Dyck/The Canadian Press via AP Photo) 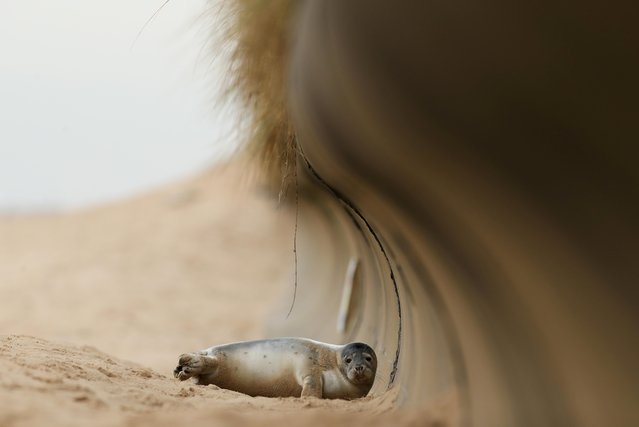 A grey seal pup is seen on Horsey Gap beach, near Horsey, on the Norfolk coast, Britain on January 13, 2021. (Photo by Peter Cziborra/Reuters) 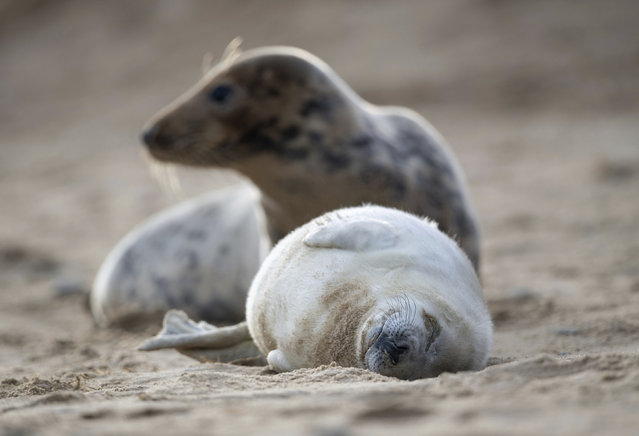 A grey seal and her pup on the beach at Horsey Gap in Norfolk, England, Sunday Jan. 10, 2021. A worldwide group are participating in a one-day video conference Monday January 11, 2021, entitled the One Planet Summit aimed at protecting the world’s biodiversity, including protection of marine ecosystems. (Photo by Joe Giddens/PA Wire via AP Photo) 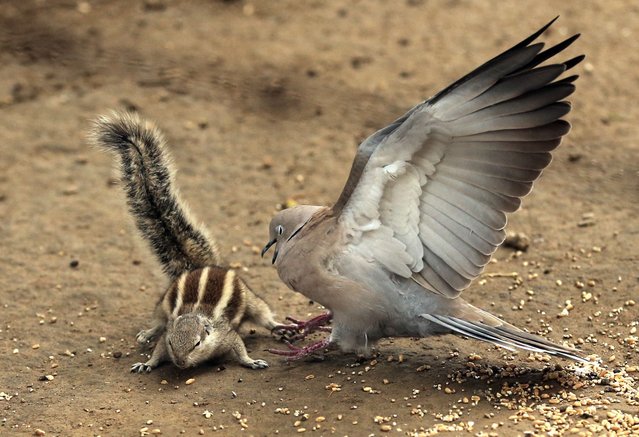 A dove chases away a chipmunk to claim wheat grains to eat, in a public garden, in Amritsar, India, 03 January 2021. (Photo by Raminder Pal Singh/EPA/EFE) A pair of Oriental Pied Hornbills is seen in a park near a forest cleared to make way for the construction of a public housing estate in Singapore on January 6, 2021. (Photo by Edgar Su/Reuters) 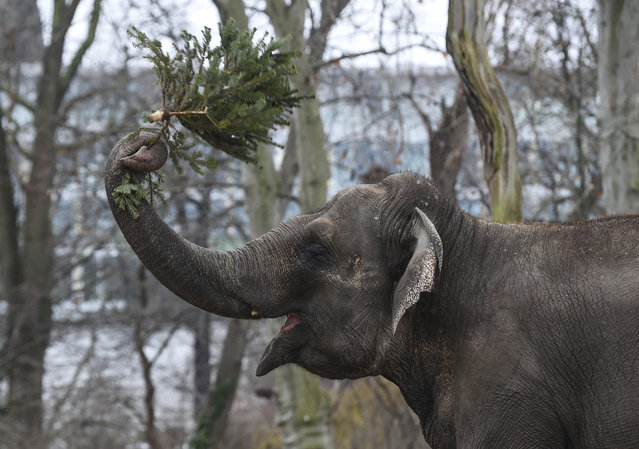 An elephant plays with a Christmas tree in Berlin on January 7, 2021. At Berlin Zoo, it's an annual tradition that brings the Christmas season to a close. (Photo by Kira Hofmann/dpa-Zentralbild/dpa) A murmuration of starlings fly above fields near Kiryat Gat, southern Israel on January 13, 2021. (Photo by Amir Cohen/Reuters) 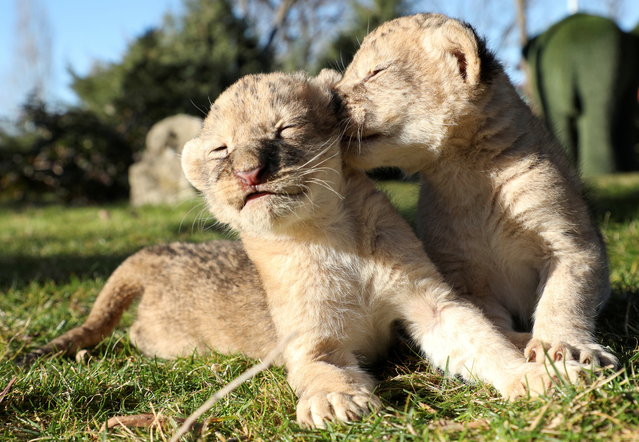 Five-day-old lion cubs rest on the ground at Taigan safari park in Belogorsk, Crimea on January 3, 2021. (Photo by Alexey Pavlishak/Reuters) 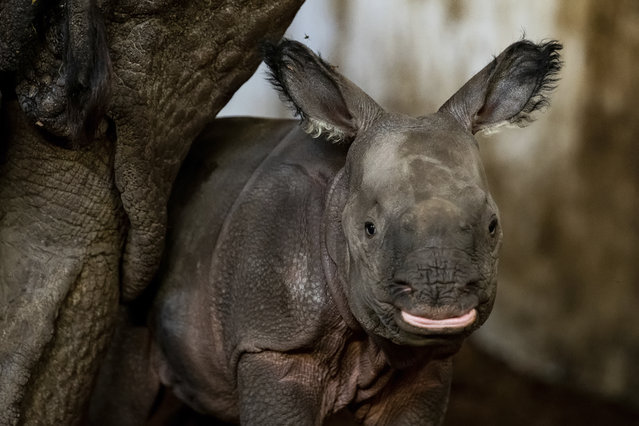 An endangered Indian rhinoceros cub stand in its enclosure in the Zoo in Wroclaw, Poland, Sunday, January 10, 2021. The cub, born on Jan. 6, 2021, is the first Indian rhinoceros birth in the zoo's 155-year history, the zoo said. (Photo by Zoo Wroclaw via AP Photo) 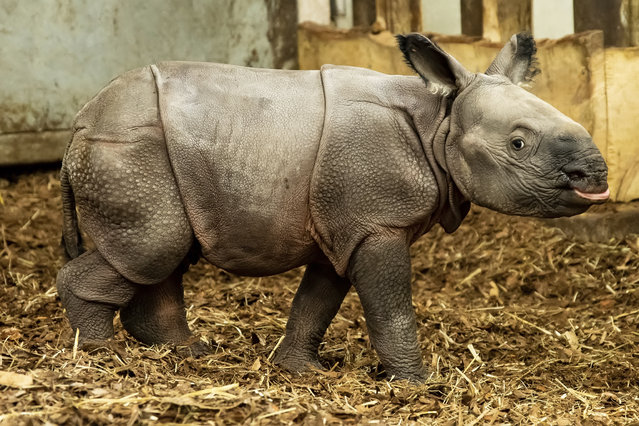 An endangered Indian rhinoceros cub stand in its enclosure in the Zoo in Wroclaw, Poland, Sunday, January 10, 2021. (Photo by Zoo Wroclaw via AP Photo) 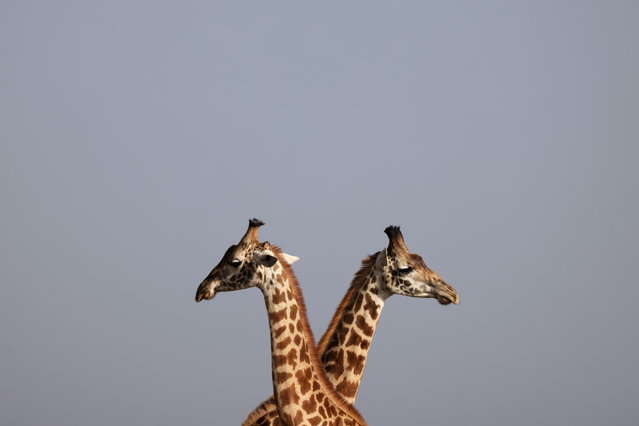 Giraffes stand next to each other inside the Nairobi National Park, Kenya, January 6, 2021. (Photo by Baz Ratner/Reuters) 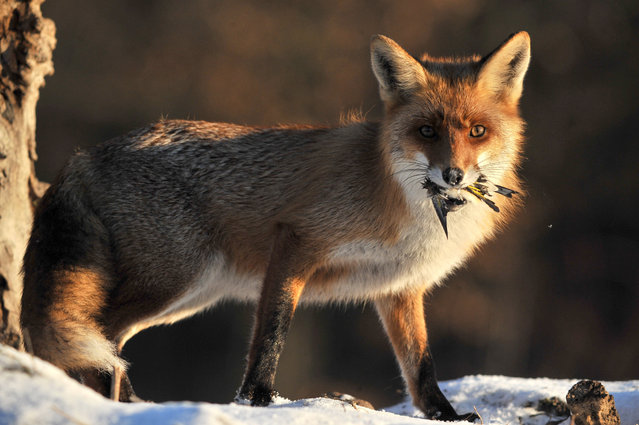