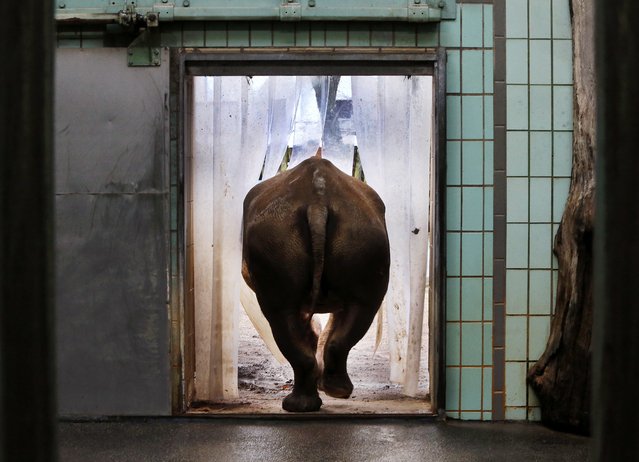 A 1500 kilogram heavy black rhinoceros leaves its indoor enclosure through a curtain in the zoo in Frankfurt, Germany, Friday, December 15, 2017. (Photo by Michael Probst/AP Photo) 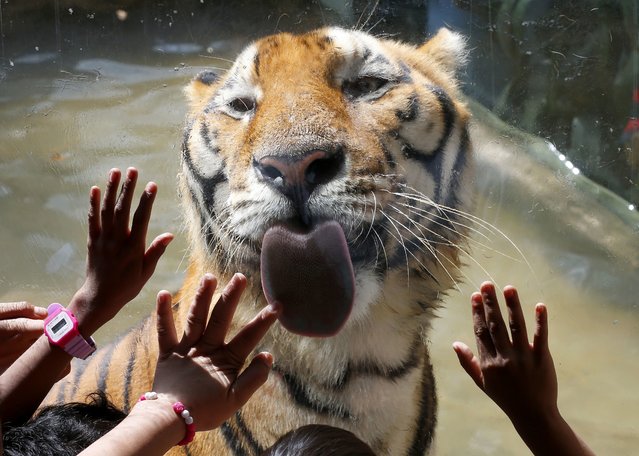 Orphans interact with a Bengal tiger during a Christmas visit to the Malabon Zoo Thursday, December 21, 2017, in Malabon city, north of Manila, Philippines. Malabon Zoo founder Manny Tangco (holding a megaphone) hosted the “Merry Animal Christmas” to some 200 orphans inside the compound to underscore that “Christmas is for animals too”. (Photo by Bullit Marquez/AP Photo) 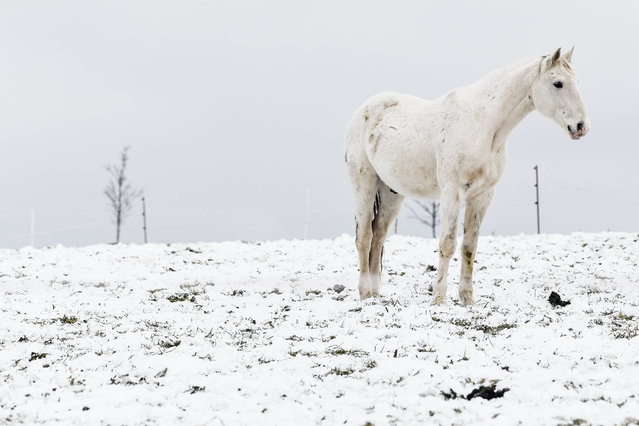 A horse stands on snow covered paddock near Bornersdorf in the so-called “Saechsische Schweiz” region in the eastern Saxony state, Germany, 19 December 2017. Meteorologist predict upcoming cold days with temperatures around zero degrees Celsius and snowfalls or rainfalls in the eastern parts of Germany. (Photo by Filip Singer/EPA/EFE) 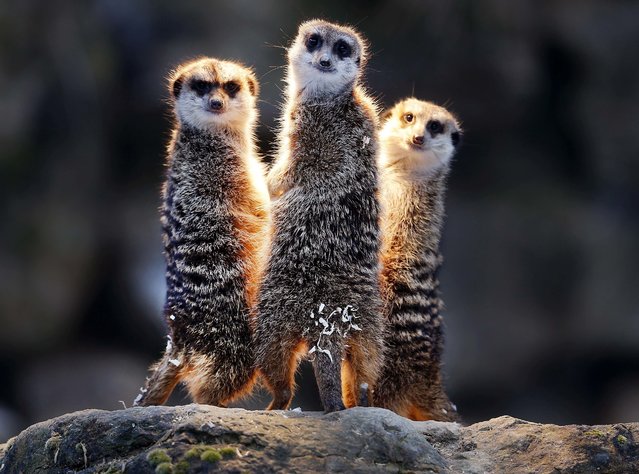 Meerkats chill under a heating lamp in their enclosure in the Opel zoo in Kronberg near Frankfurt, Germany, Tuesday, December 19, 2017. (Photo by Michael Probst/AP Photo) 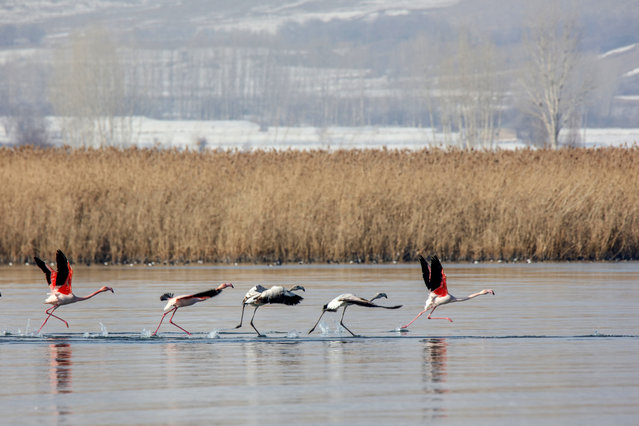 Flamingos are seen as they swimming at Lake Van which hosts many kinds of birds, during winter season on December 18, 2017 in Van, Turkey. (Photo by Ali Ihsan Ozturk/Anadolu Agency/Getty Images) 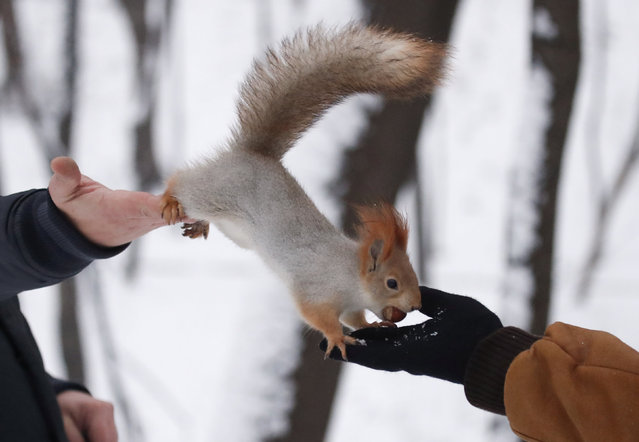 A squirrel is seen on pedestrians' hands in a park in Moscow, Russia December 19, 2017. (Photo by Maxim Shemetov/Reuters) 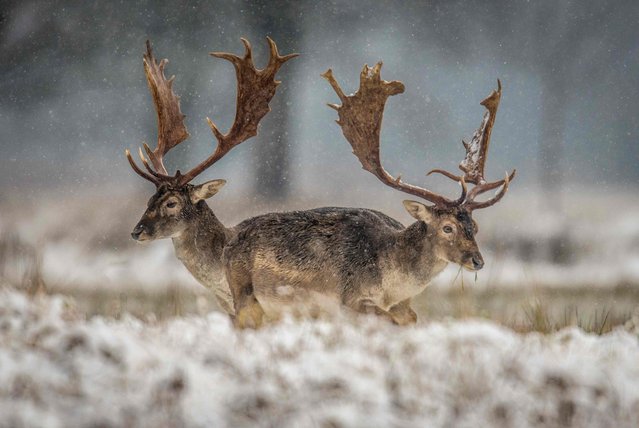 Fallow deers stand on a field as snow falls near Moerfelden-Walldorf, central Germany, on December 18, 2017. (Photo by Boris Roessler/AFP Photo/DPA) 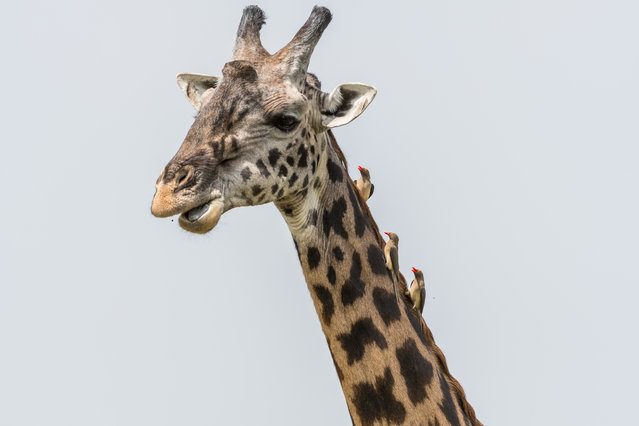 Small oxpecker birds feed off ticks and parasites living in the hide of the giraffe's neck pictured in the fields Masai Mara on December 2017 in Kenya. An acclaimed wildlife photographer has captured incredible images of small oxpecker birds eating parasites from a giraffe's neck. German photographer Ingo Gerlach took the pictures while snapping the giraffes at a waterhole in the Masai Mara in Kenya in December 2017. Oxpeckers derive their name from their habit of perching on large mammals such as zebras, cattle and rhinos and eating ticks, larvae and other parasites from their bodies. As Ingo photographed the giraffe he noticed the oxpeckers eating parasites from the giraffe's neck, before moving up to its head. Eventually this giraffe grew tired of its visitors and scared them off with a violent shaking of the head. (Photo by Ingo Gerlach/Barcroft Images) 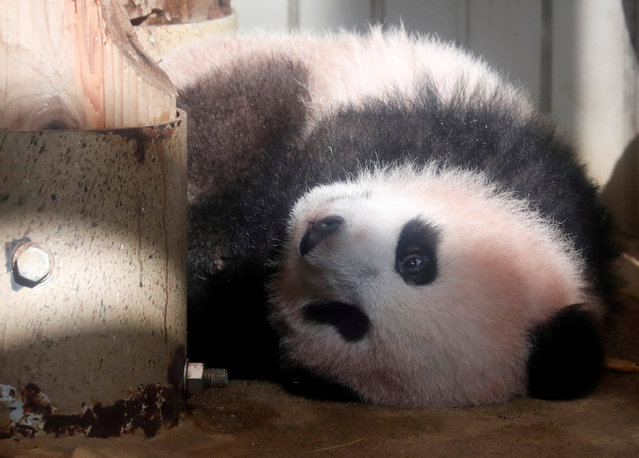 A baby panda Xiang Xiang, born from mother panda Shin Shin on June 12, 2017, is seen during a press preview ahead of the public debut at Ueno Zoological Gardens in Tokyo, Japan December 18, 2017. (Photo by Issei Kato/Reuters) 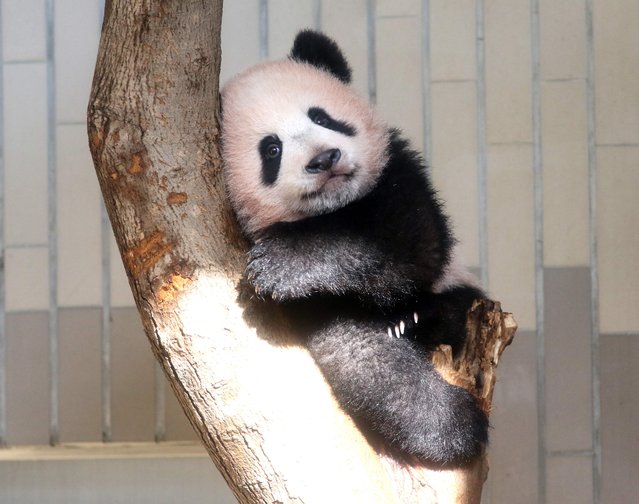 Baby panda Xiang Xiang plays at its enclosure during a press preview at Ueno Zoo in Tokyo on December 18, 2017. The baby panda born six months ago in Japan made its debut before the cameras on December 18, a day before a doting public gets an eagerly-awaited glimpse of the cuddly animal. (Photo by Yoshikazu Tsuno/AFP Photo) 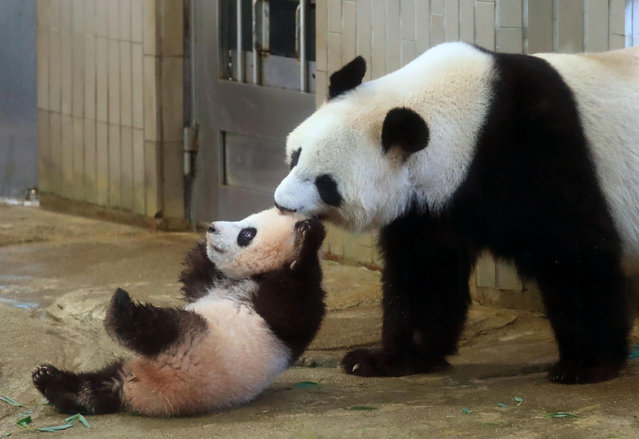 Giant panda cub Xiang Xiang, left, is pulled by her mother Shin Shin at Ueno Zoo in Tokyo Tuesday, December 19, 2017. Xiang Xiang, or Fragrance in Chinese, a 6-month-old female giant panda, made a debut Tuesday in a limited public viewing for avid fans who obtained tickets through a highly competitive lottery process. (Photo by Kyodo News via AP Photo) 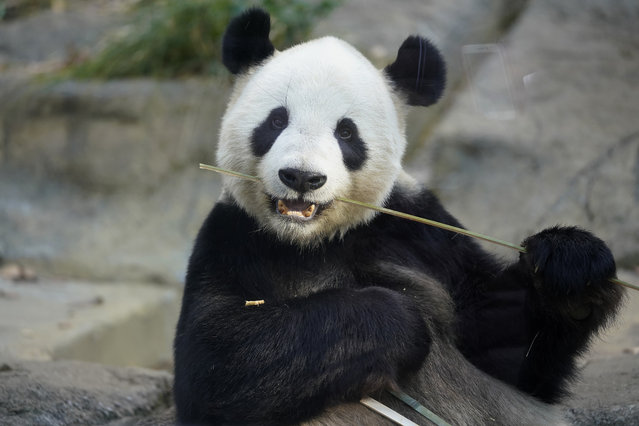 Male giant panda Ri Ri, father of baby panda Xiang Xiang, bites bamboo at a cage at Ueno Zoo in Tokyo, Monday, December 18, 2017. Ri Ri's baby panda has made a special appearance before Tokyo’s governor, a group of local schoolchildren and the media one day ahead of her official debut. (Photo by Shizuo Kambayashi/AP Photo) 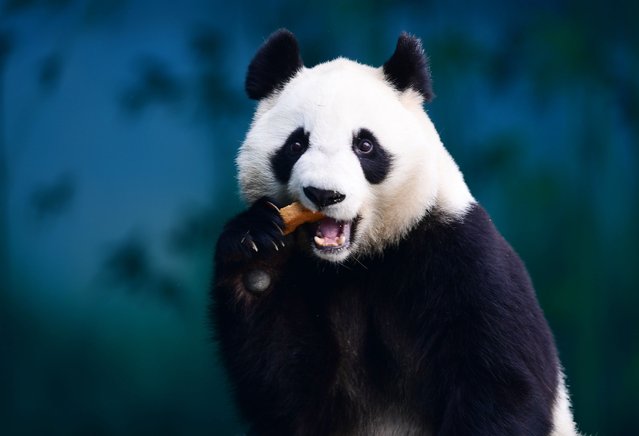 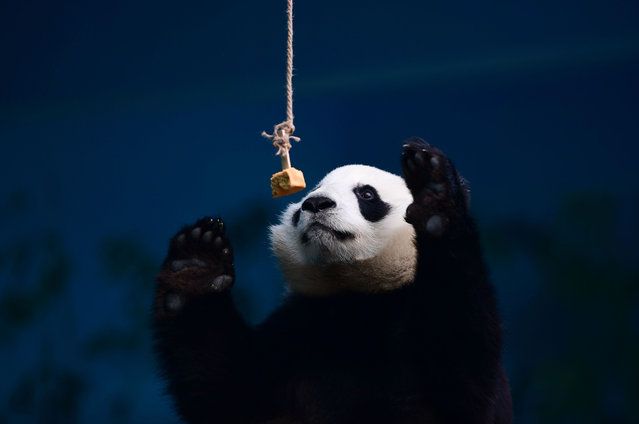 A panda reaches out for food at the Shenyang Forest Zoological Garden in Shenyang, China's northeastern Liaoning province on December 20, 2017. (Photo by AFP Photo/Stringer) 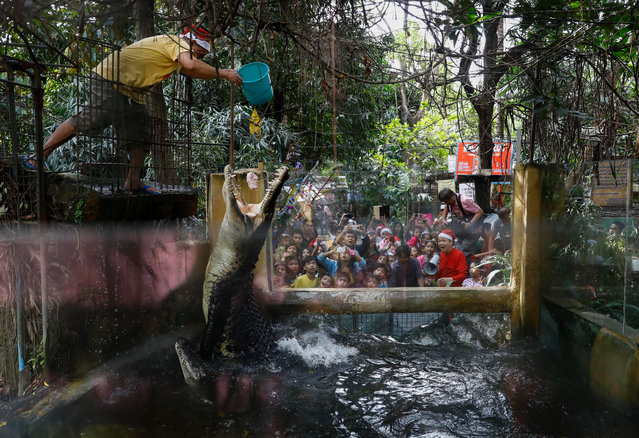