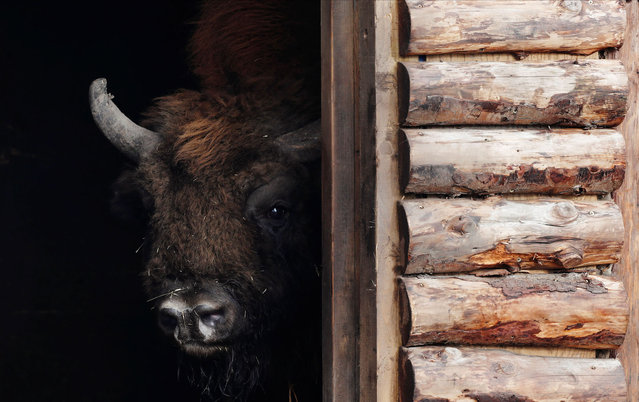 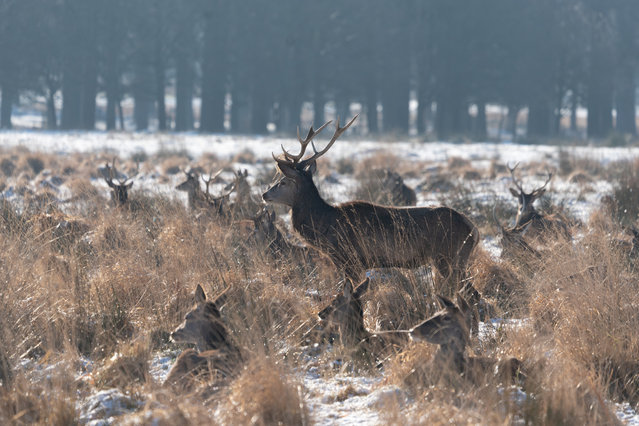 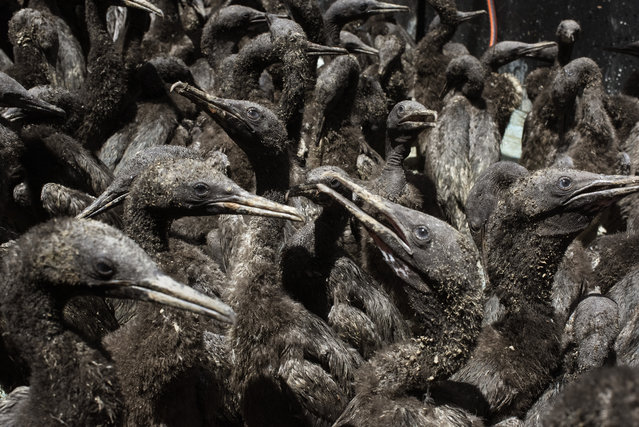 Some of the 1200 Cape Cormorant chicks being taken care of after being rescued from Robben Island at the Southern African Foundation for the Conservation of Coastal Birds (SANCCOB), in Cape Town on January 28, 2021. The chick's parents abandoned them, it is thought, for a lack of food, which is mostly anchovies. (Photo by Rodger Bosch/AFP Photo) 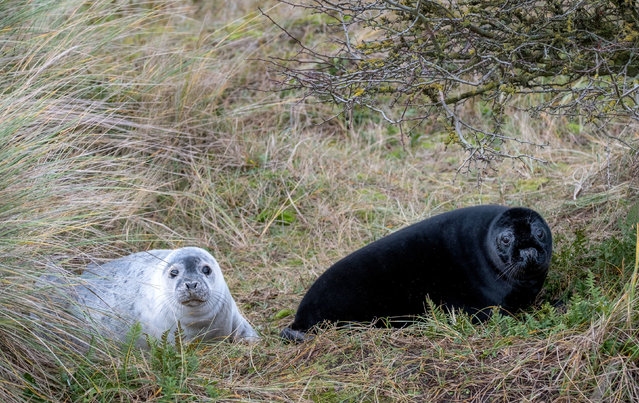 One of 10 melanistic grey seal pups (R) that have been spotted by rangers over the course of the winter pupping season 2020/21 in Blakeney Point, England. Black seals are rare with approximately one in 400 grey seals being melanistic. The rangers cannot tell if seals are grey or melanistic until they moult at two- to three-weeks-old and the black velvety coat is revealed. (Photo by Siebers/National Trust/PA Wire) 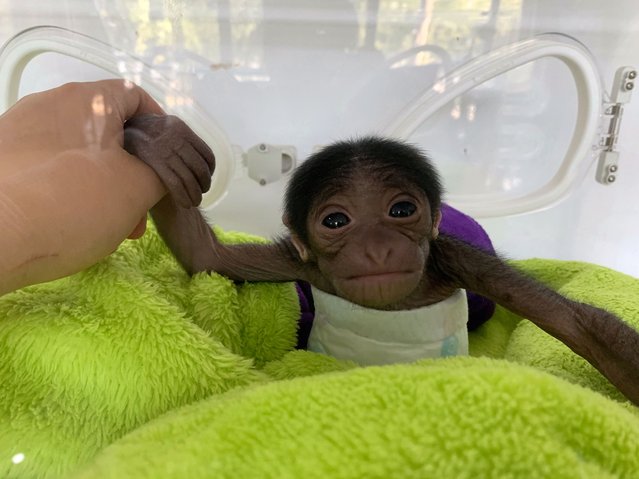 A baby siamang named “Lucky” is seen at Hongshan Forest Zoo on Janaury 25, 2021 in Nanjing, Jiangsu Province of China. The baby siamang (Symphalangus syndactylus) was born by caesarean section on December 27 last year. (Photo by Fan Xiaolin/VCG via Getty Images) 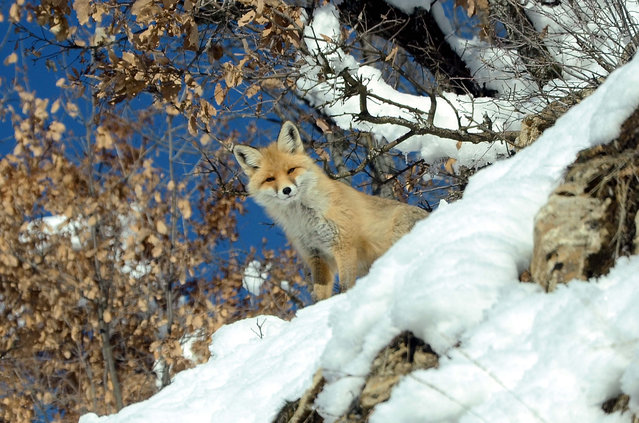 A hungry red fox is seen on a hill after snowfall covered all the land during harsh winter conditions as the wild animals begin seeking food in towns, in Hizan district of Bitlis in Turkey on January 24, 2021. (Photo by Ahmet Okur/Anadolu Agency via Getty Images) 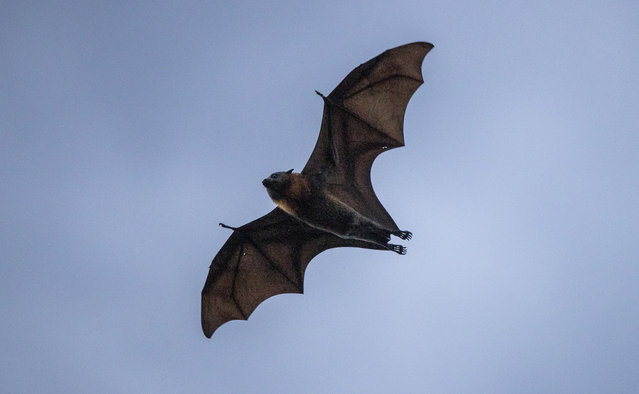 A bat glides across the sky at sunset in Sydney, Australia, Tuesday, January 26, 2021. (Photo by Mark Baker/AP Photo) 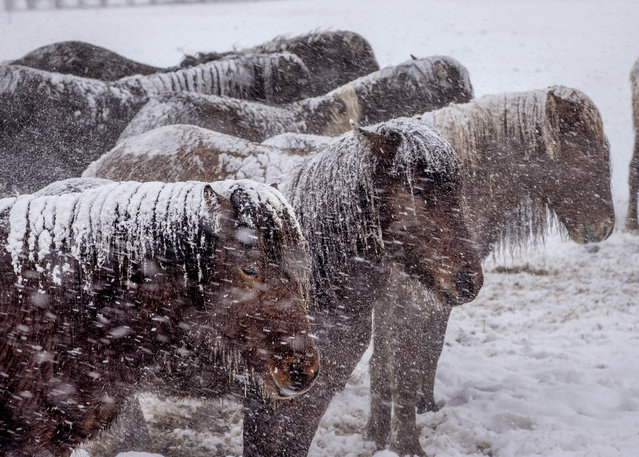 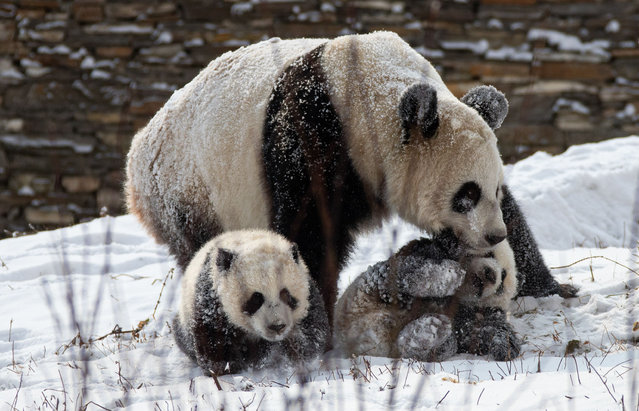 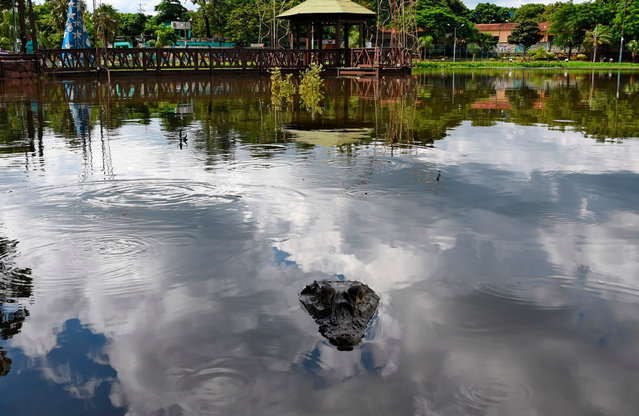 A cayman is seen at a lake in Ita, Paraguay on January 27, 2021. Volunteer firefighters rescued seven caymans which were on the streets of Ita after the overflowing of a lake during heavy rains on Wednesday early morning. (Photo by Norberto Duarte/AFP Photo) 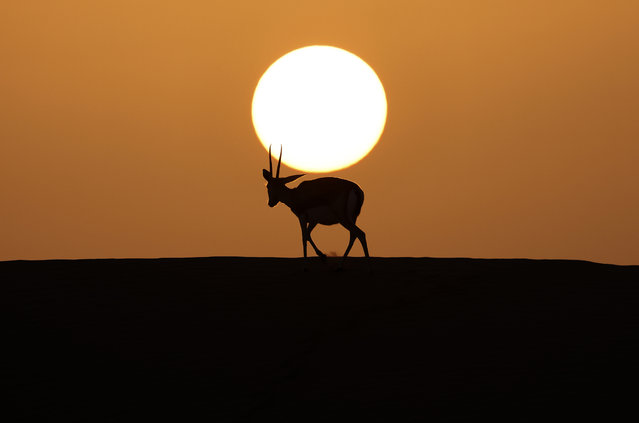 Arabian sand gazelles, known as “Reem”, are pictured at the Telal Resort on the outskirts of the city of al-Ain at the far east of the Gulf emirate of Abu Dhabi on January 26, 2021. (Photo by Karim Sahib/AFP Photo) 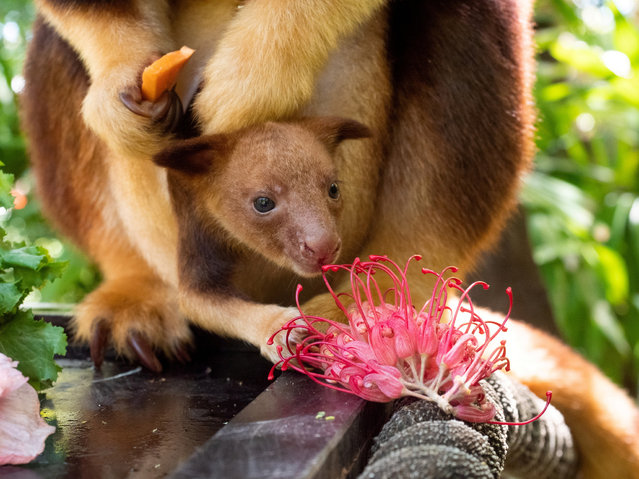 A Goodfellow's Tree Kangaroo joey with its mother at Sydney Zoo in Australia on January 22, 2021. The 28-week-old male joey, who is yet to be named, has only just begun to pop his head and shoulders out of his mum's pouch. (Photo by Taronga Zoo via Reuters) 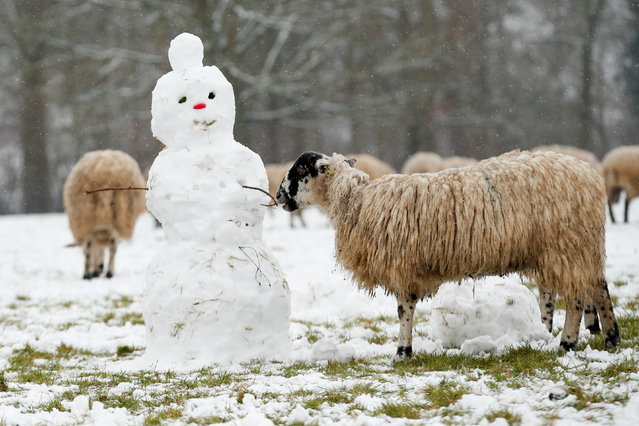 A sheep stands next to a snowman in Campbell Park, in Milton Keynes, Britain on January 24, 2021. (Photo by Andrew Boyers/Reuters) 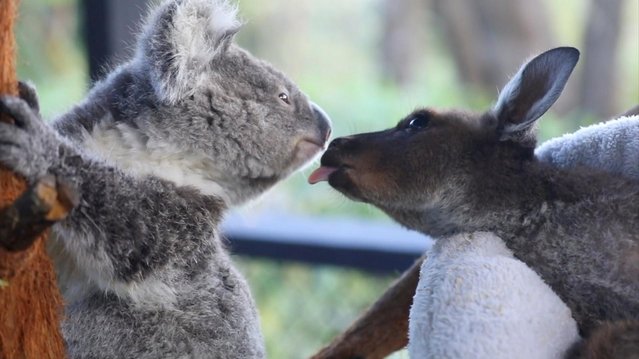 Ash the koala joey and Frankie the kangaroo joey are seen at the Australian Reptile Park in Somersby, New South Wales, Australia, January 14, 2021, in this still image from video. (Photo by Australia Reptile Park via Reuters) 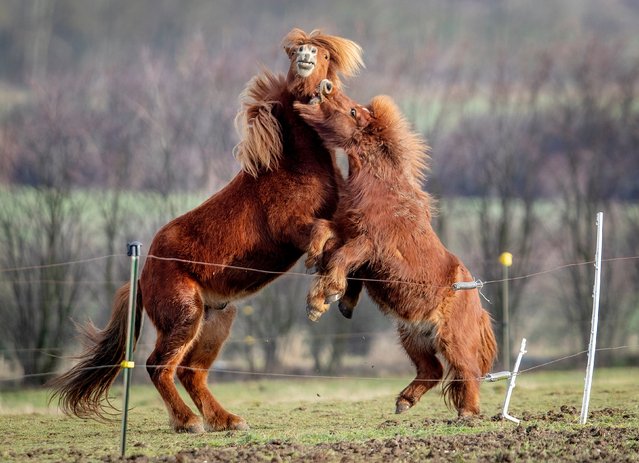 An Icelandic horse, left, and a Shetland pony play at a stud farm in Wehrheim near Frankfurt, Germany, Monday, January 18, 2021. (Photo by Michael Probst/AP Photo) 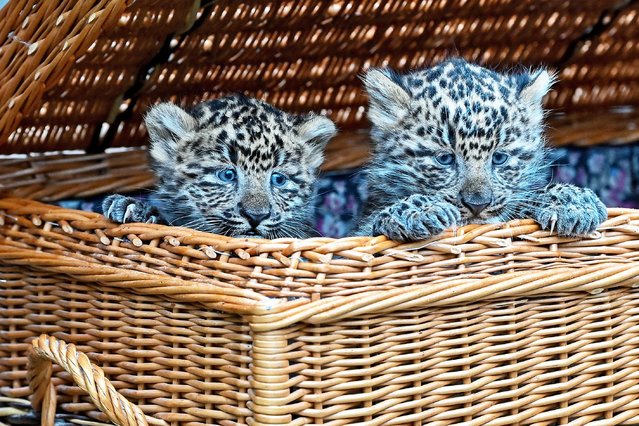 Two young China leopards look out of a wicker basket in Cottbus Zoo in Germany on January 28, 2021. Cottbus Zoo has achieved an important breeding success with the China leopards. A newly formed breeding pair has now had offspring for the first time. As is typical for leopards, the cubs spent their first weeks completely undisturbed in the litter box and are now beginning to explore their surroundings and also the outdoor enclosure. (Photo by Patrick Pleul/dpa) 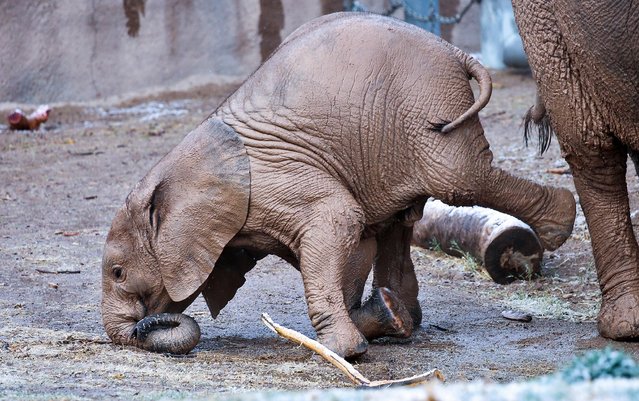 A young elephant enjoys a rare snowstorm at Reid Park Zoo in Tucson, Arizona on January 27, 2021. (Photo by Reid Park Zoo via Reuters) 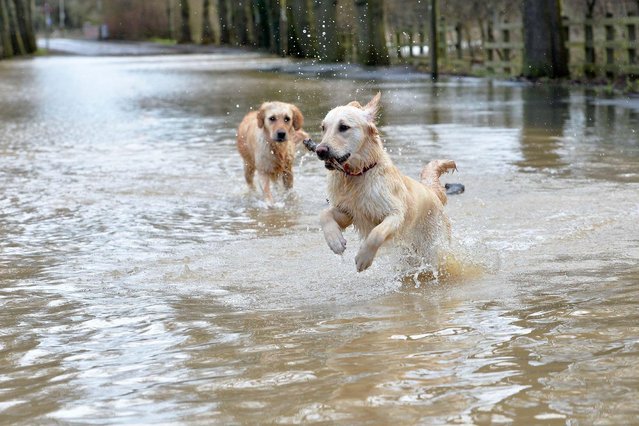 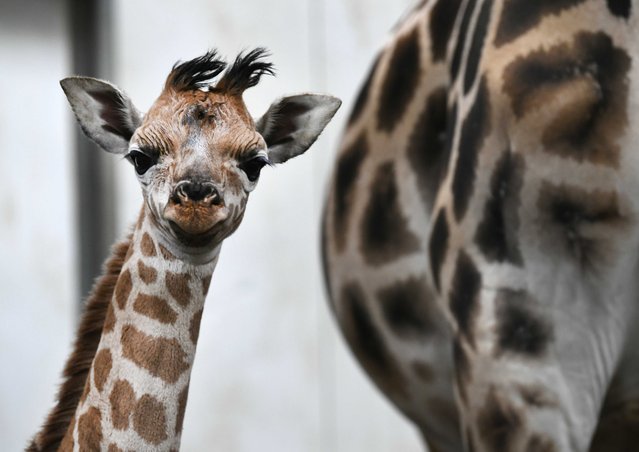 A newborn Nubian giraffe, named Christine, in her indoor enclosure in Safaripark Beekse Bergen in Hilvarenbeek, The Netherlands, 27 January 2021. Nubian giraffes are very rare in the wild due to deforestation and hunting. (Photo by Piroschka van de Wouw/EPA/EFE) 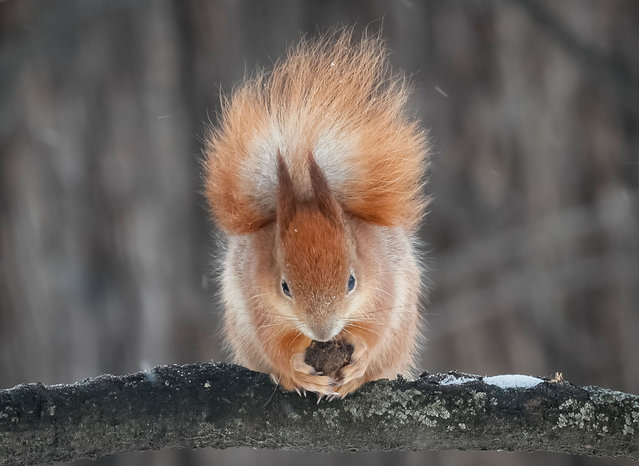 A squirrel eats a nut in a city park, with the air temperature at about minus 16 degrees Celsius (3.2 degrees Fahrenheit), in Kyiv, Ukraine on January 20, 2021. (Photo by Gleb Garanich/Reuters) 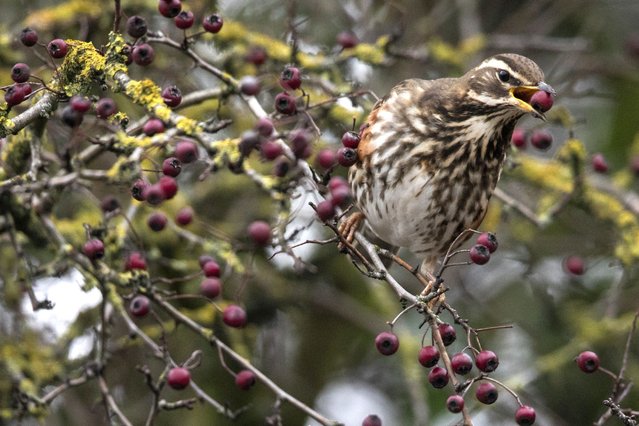 A Redwing feeds on berries on January 26, 2021 in London, United Kingdom. Many migratory birds such as Fieldfare and Redwing, that arrive on easterly winds from Scandinavia, are currently enjoying a bumper crop of berries across the UK. (Photo by Dan Kitwood/Getty Images)
Edit Del
31 Jan 2021 08:44:00, post received 0 comments
Publication archive:
←   →
Popular tags:
All tags
Last searches: