Fact Applications of Bionics in Sports 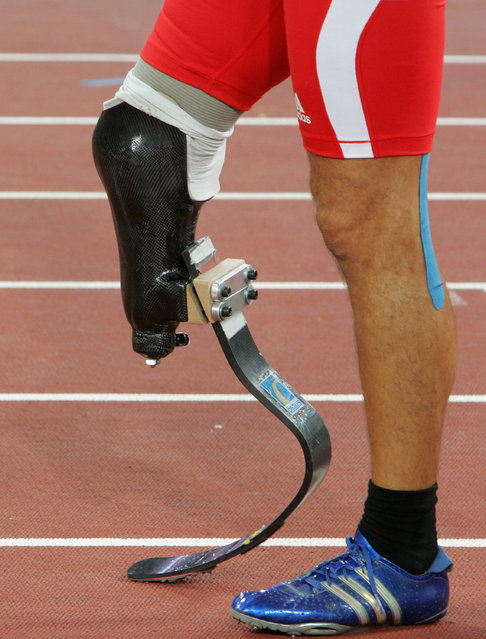 A general view is seen of the prosthetic leg belonging to Urs Kolly of Switzerland as he prepares to race in the 400m of the men's pentathlon P44 Athletics event at the National Stadium during day five of the 2008 Paralympic Games on September 11, 2008 in Beijing, China. (Photo by Mark Kolbe/Getty Images) 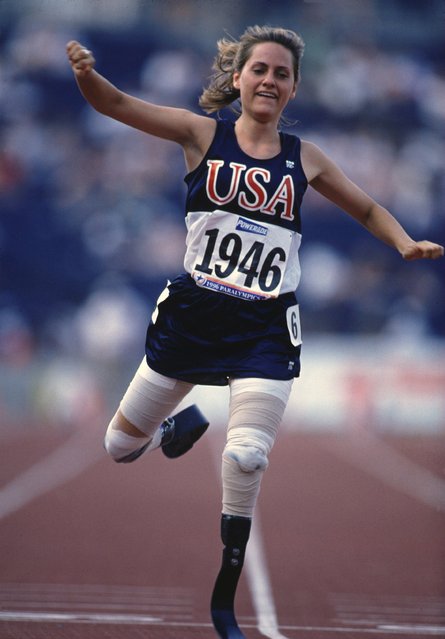 Aimee Mullins of the USA competing in the 100m race during the Paralympics at Olympic Stadium in Atlanta, Georgia, on August 21, 1996. (Photo by Phil Cole/AllSport) 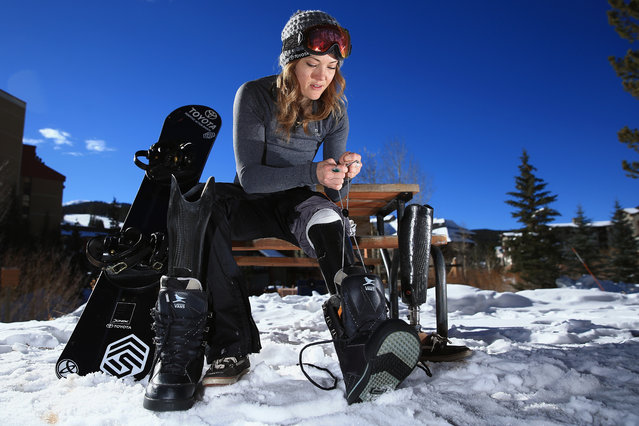 Amy Purdy swaps her prosthetic legs as she prepares for a training session on December 16, 2013 in Copper Mountain, Colorado. Purdy is a a member of the US Paralymic Snowboard Team and co-founder of Adaptive Action Sports. (Photo by Doug Pensinger/Getty Images) 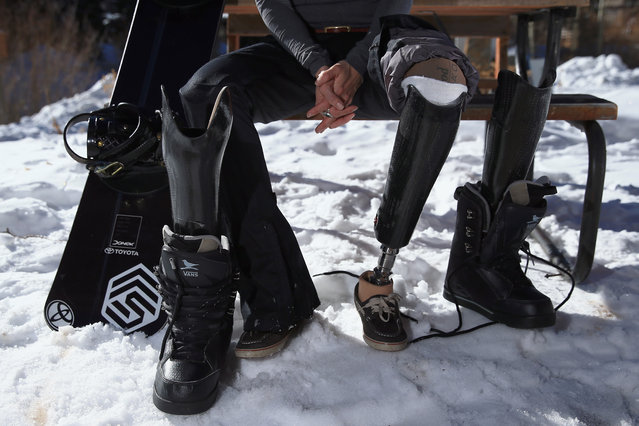 Amy Purdy prepares to swap her prosthetic legs for a training session on December 16, 2013 in Copper Mountain, Colorado. (Photo by Doug Pensinger/Getty Images) 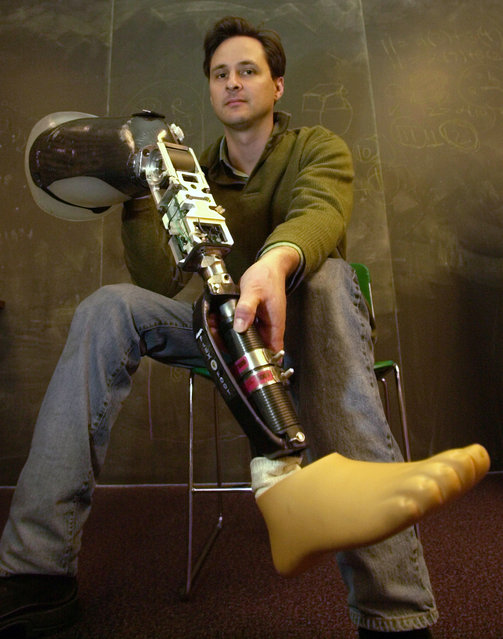 Dr. Hugh Herr holds a prosthesis outside his office at the Massachusetts Institute of Technology, Wednesday, December 19, 2002, in Cambridge, Mass. Twenty years ago, Herr and his friend, Jeffrey Batzer, were rescued after an ice climbing accident on Mount Washington in New Hampshire. Both men suffered severe frostbite, with Herr losing his legs six inches below the knees. Now Herr teaches an anatomy class at Harvard Medical School, has developed improved prostheses for knees andfeet, and has seven patents. (Photo by Elise Amendola/AP Photo) 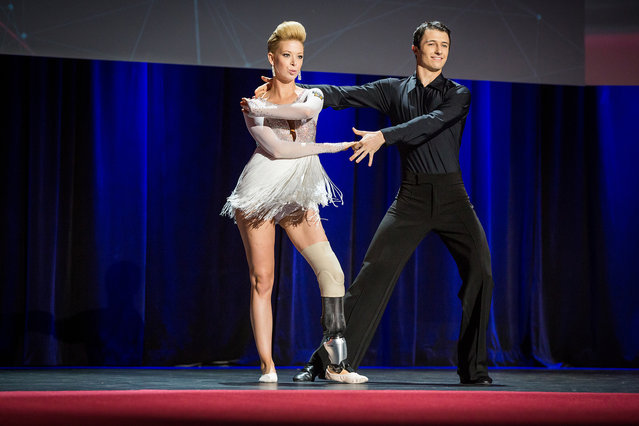 In this photo provided by TED 2014 Conference, dancer Adrianne Haslet-Davis, left, performs on stage with dancer Christian Lightner at the 2014 TED Conference, in Vancouver, British Columbia, on March 19, 2014. Haslet-Davis took to the stage with a new prosthetic limb to perform for the first time since losing part of her left leg in the 2013 Boston Marathon bombing. (Photo by James Duncan Davidson/AP Photo/TED 2014 Conference) 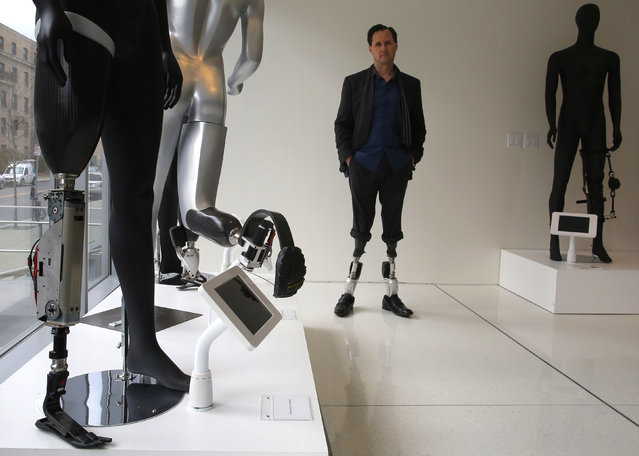 Professor Hugh Herr, who heads the Biomechatronics research group at the MIT Media Lab, stands amid mannequins displaying various bionic limbs his lab has developed at the Massachusetts Institute of Technology in Cambridge, Massachusetts April 4, 2014. The homemade bombs that ripped through the crowd at the finish line of last year's Boston Marathon, killing three people and injuring 264, showcased the city's medical talent but also taught valuable lessons in responding to a mass disaster. As victims slowly adjust to life without limbs, a ballroom dance instructor's story inspired the Massachusetts Institute of Technology biophysicist who is a double amputee to return her to the dance floor with a specially designed bionic leg. (Photo by Brian Snyder/Reuters) 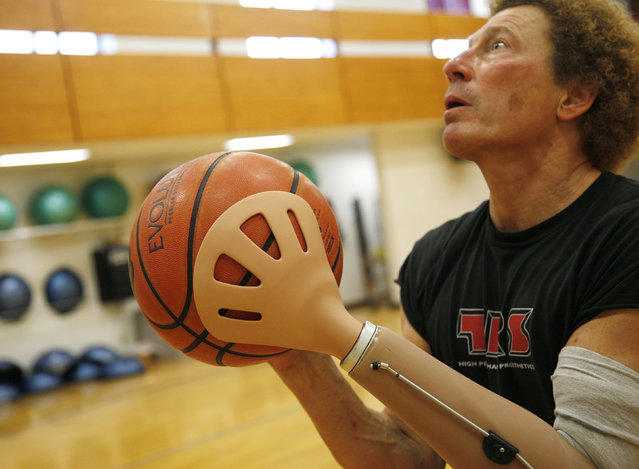 Bob Radocy of TRS Inc. holds a basketball with a prosthetic hand designed for the sport at a gym in Boulder, Colorado August 21, 2009. Radocy designs and builds prosthetic attachments that allow amputee athletes to participate in multiple sports. (Photo by Rick Wilking/Reuters) 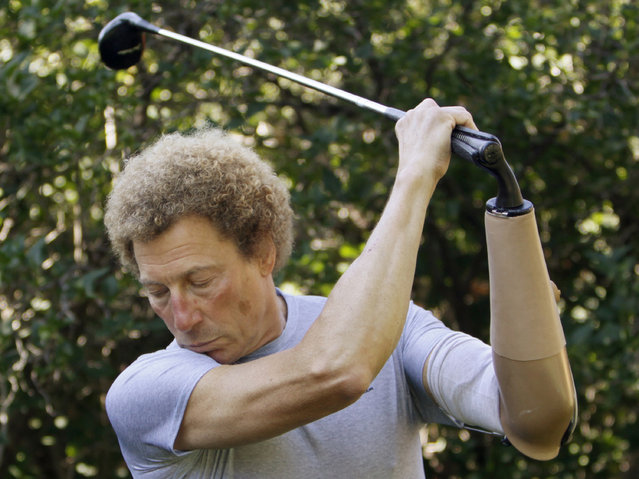 Bob Radocy of TRS Inc. swings a golf club with a golf hand replacement at his home in Boulder, Colorado August 20, 2009. Radocy designs and builds prosthetic attachments that allow amputee athletes to participate in multiple sports. The golf hand stores energy on the backswing improving power through the downstroke. (Photo by Rick Wilking/Reuters) 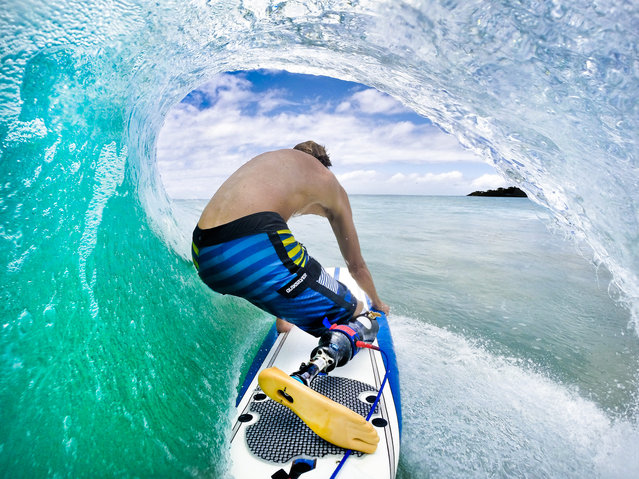 “This is a shot I have envisioned in my head for a while, and only possible to shoot today with the invention of the GoPro. Shot at a beach break near my home. The board broke on this wave, but the vision made it worthwhile. Shot with the GoPro Hero 3+ and a Gripstick Pro Mount”. (Photo and caption by Mike Coots) 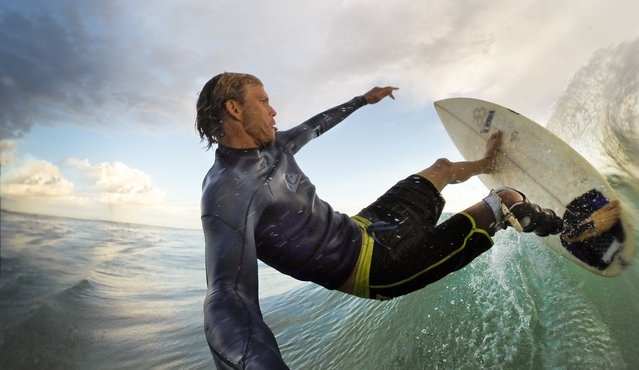 “Top turn shot with the Hero 3+. This Merrick is a magic board given to me by Bethany Hamilton. GoPro made me this neat surf handle that works well. A bit akward to paddle with it in your mouth though as it feels like I am getting waterboarded”. (Photo and caption by Mike Coots) 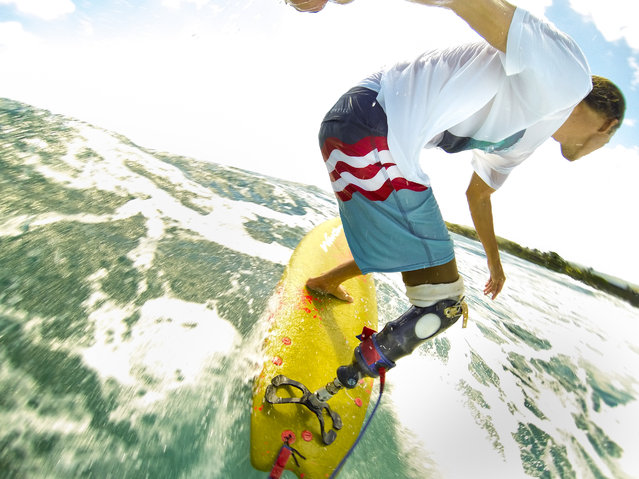 Just this July, Mike Coots tried out a new foot designed especially for balancing by Ossur. He took this photo on his first day out with it, and it “felt really good!” he told. (Photo by Mike Coots) 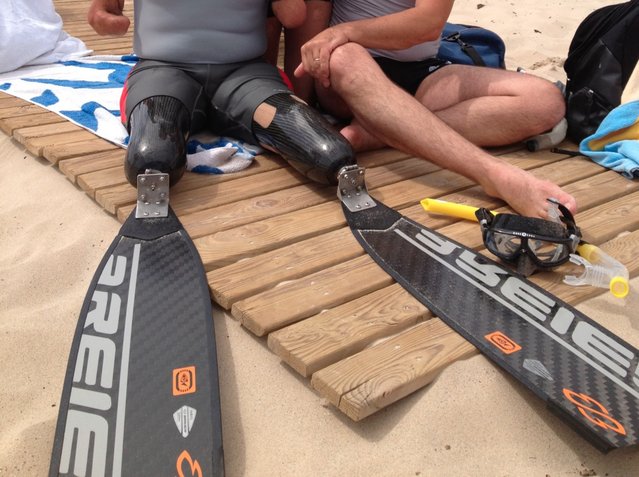 Other aquatic athletes trade in their feet for fins. (Photo by NADF) 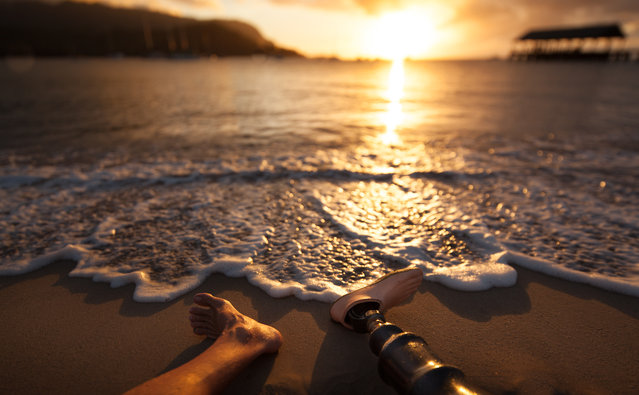