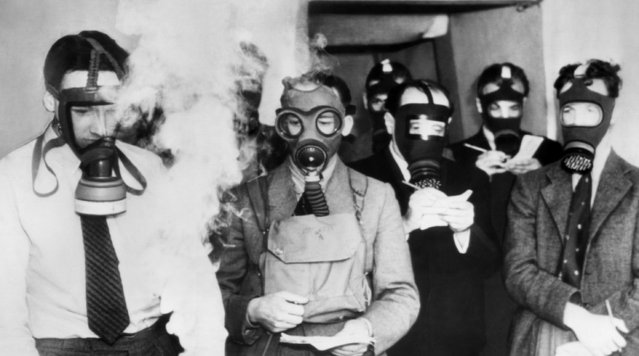 Left to right: John Fremlin, research physicist, wears a German gas mask; Mr. Sander, air raid precautions instructor, wears an army mask; and Lord Forces and M. Dunne wear civilian type masks, which sell in England for about 60 cents. They're in a chamber in London testing the masks, jotting down notes as the fumes of the gas swirl about them, on August 27, 1938. (Photo by AP Photo) 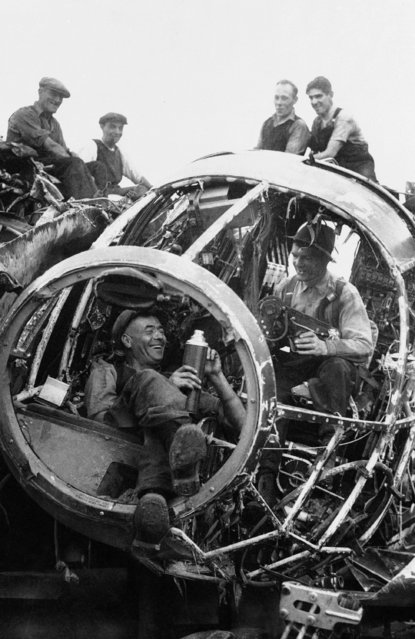 British workmen, employed in the reclamation of materials salvaged from German raiders which have been shot down over England, are eating lunch in the nose section of a raider in the salvage yard, August 27, 1940. (Photo by AP Photo) 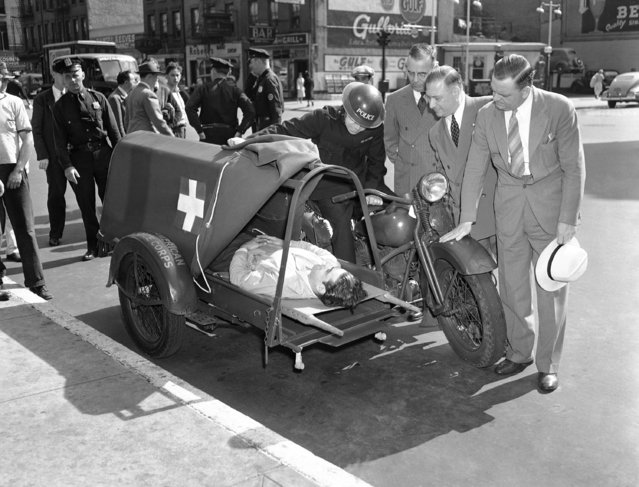 Developed for the British American Ambulance Corps, this new motorcycle ambulance is capable of speeding wounded soldiers 90 miles an hour from the front lines to field hospitals. Its springs are synchronized with the patient's heartbeat to avoid increasing fever when traveling over various Terrain. Viewing it in New York August 27, 1941, are left to right: constable Herbert Scott of England, driver; William E. Detlor, whose firm developed the vehicle; M. W. Stand, inspector-general of Civilian Defense, and Maj. Edward Riekert, also. (Photo by AP Photo) 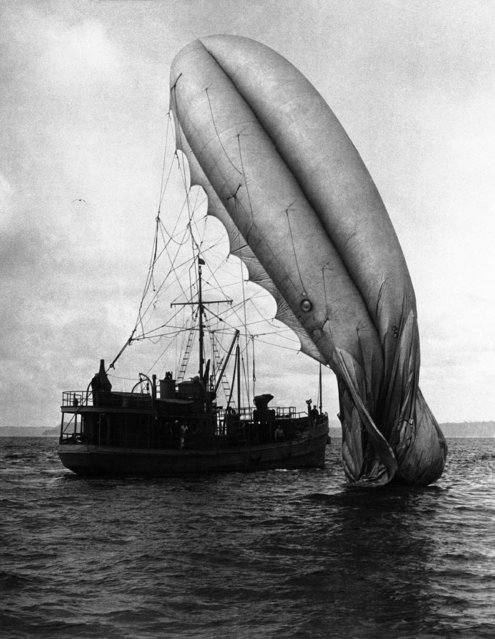 This barrage balloon which broke from its moorings and came down in water (some where in the Pacific Northwest) is being retrieved by a patrol boat August 27, 1942. Army authorities said the balloon suffered only minor damage. (Photo by AP Photo) 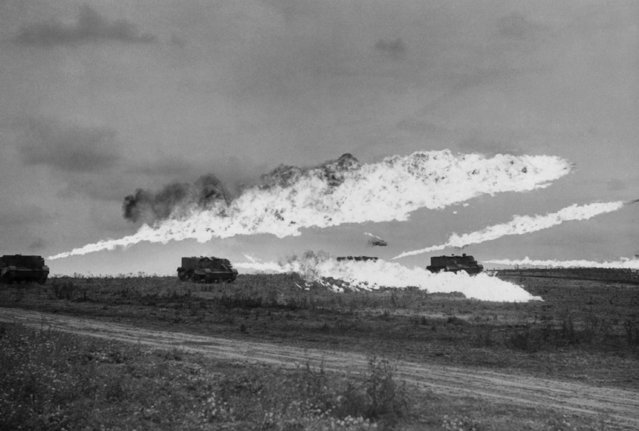 The mighty Churchill Crocodile, powerful flame throwing tanks, shoot their deadly flames during practice, August 27, 1944. The British weapon was designed for use against pillboxes in Germany and in the Atlantic wall. (Photo by AP Photo) 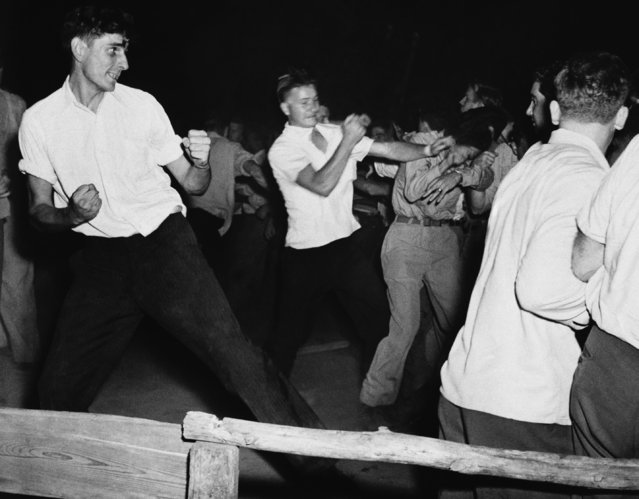 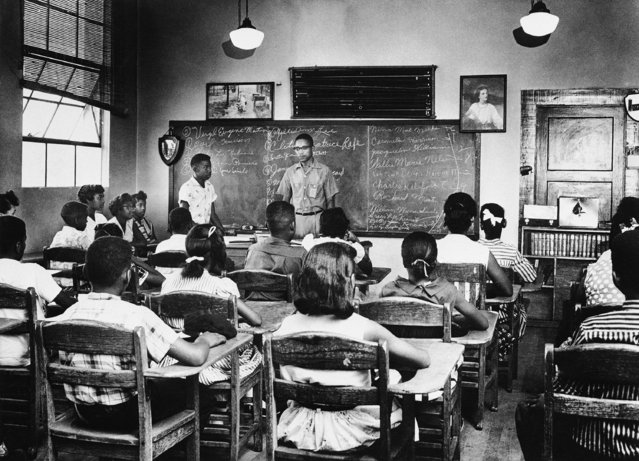 White students are conspicuously absent from this Colp grade school classroom in Colp, Illinois as they boycotted the newly-integrated school system on Monday, August 27, 1957. Principal Archie Moseley addresses part of the 60 students who registered. None of the more than 40 white students showed up. (Photo by AP Photo) 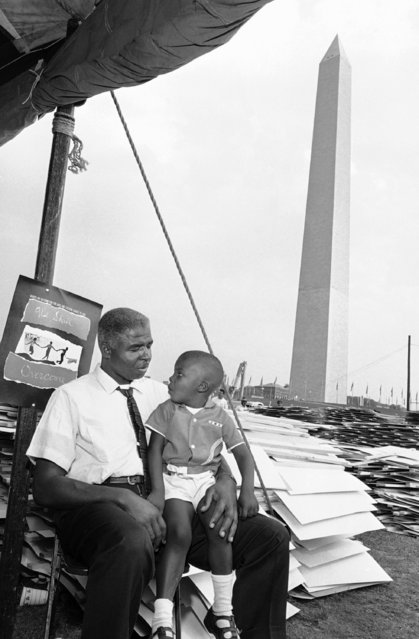 Roosevelt Nesmith of Camden, N.J., talks to his three-year-old son, Roosevelt Noel, about the August 28 civil rights March on Washington, August 27, 1963. Between the father and son, and the Washington Monument, is a stack of signs which the marchers, estimated to be more than 100,000, will carry in the demonstration. (Photo by AP Photo) 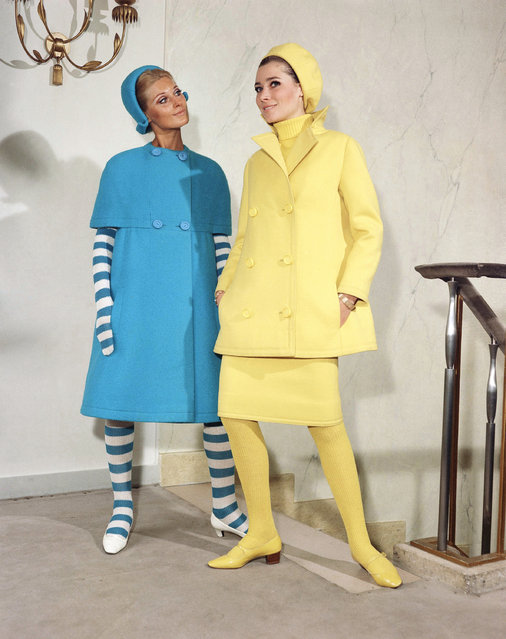 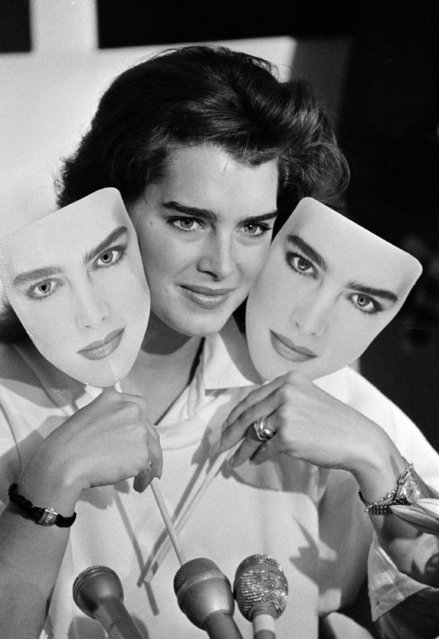 Actress-model Brooke Shields holds up two masks of her own face at the end of a press conference at a Boston department store as part of a promotional tour for a new line of clothes, August 27, 1985. (Photo by Peter Southwick/AP Photo) 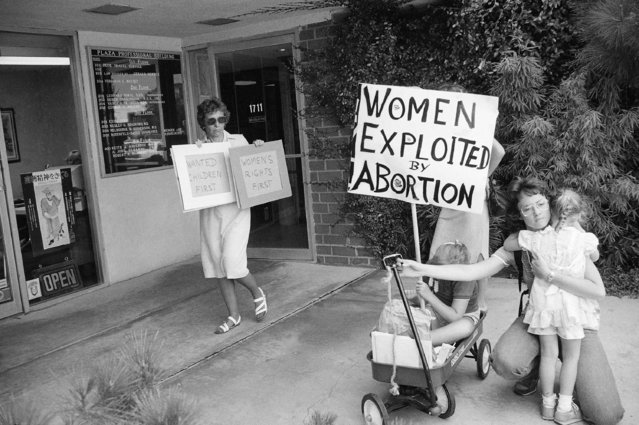 Dr. Lynn Negus, left, an associate clinical professor at the University Of Southern California School Of Medicine, holds two small pro-abortion signs, after she demonstrated recently at a building entrance where a coalition of anti-abortion groups marched against an alleged abortion practitioner in Torrance, Calif. on August 27, 1985. At right, Debbie Thyfault and her children, Heidi, 6, and Hansi, 4, hold an anti-abortion sign. Dr. Negus said she was driving by and saw the anti-abortion demonstration and decided to express her own views. (Photo by Wally Fong/AP Photo) 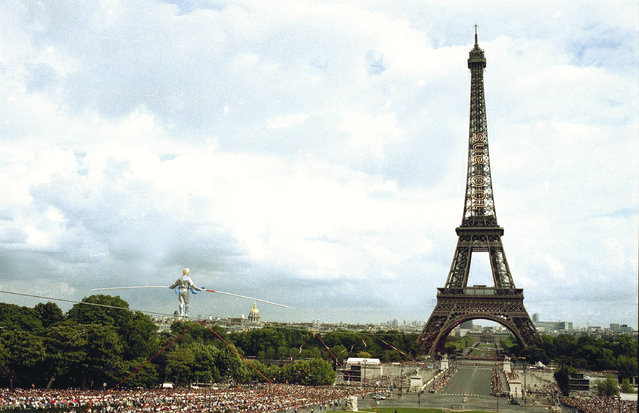 French high wire artist Philippe Petit walks towards the Eiffel Tower across a cable stretching approximately 2,300 feet. Petit holds a copy of the 200 year old Declaration of Human Rights which he will give to Jacques Chirac, the Paris Mayor, at the other end. Paris, August 27, 1989. (Photo by Pierre Gleizes/AP Photo) 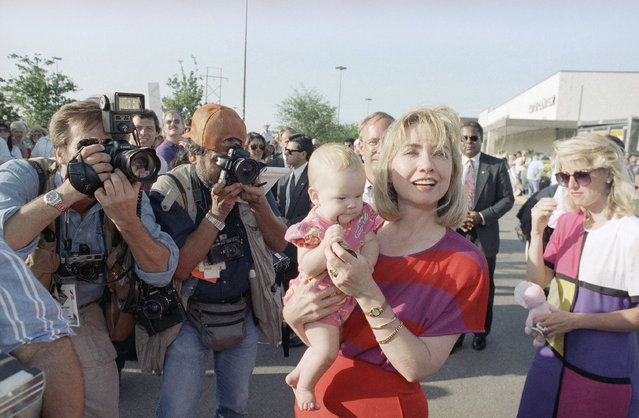 Hillary Rodham Clinton carries 6-month-old Murphy McCollough past news photographers during an impromptu stop in Georgetown, Texas on Thursday, August 27, 1992. The Democratic presidential and vice-presidential candidates and their wives are on a two-day bus tour through Texas. (Photo by Stephan Savoia/AP Photo) 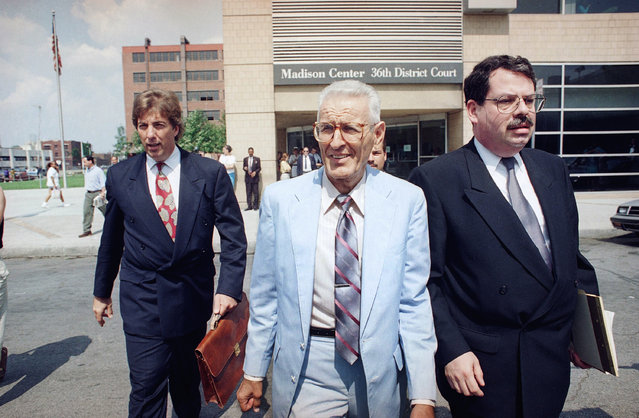