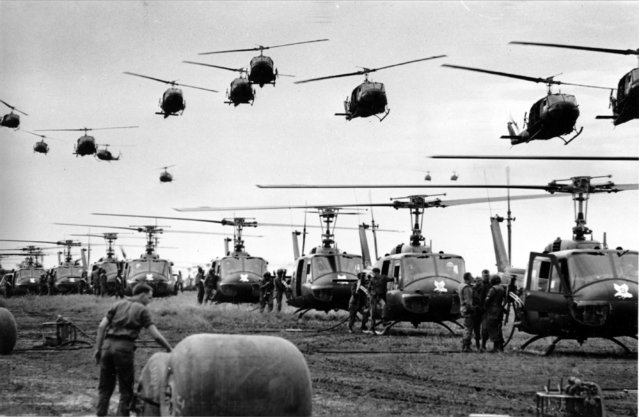 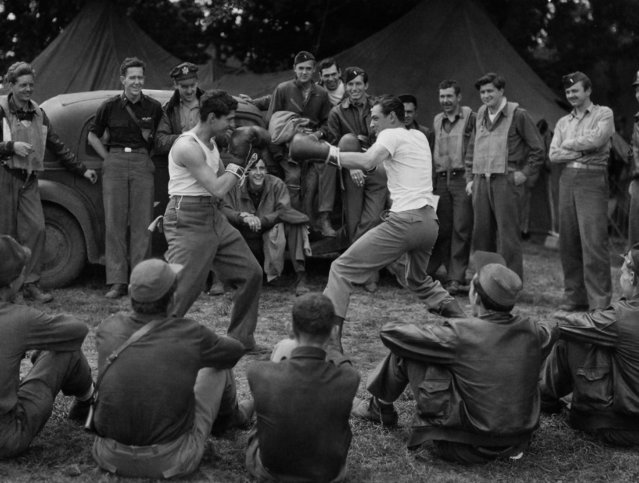 Lt. Col. Jim Daley, right, of Amarillo, Tex., and Lt. Sumner Calish, of Boston, Mass., engage in a bout of fisticuffs by way of relaxation between sorties from a U.S. 9th A.F. Fighter group base in France on August 28, 1944. (Photo by Fred Namage/AP Photo) 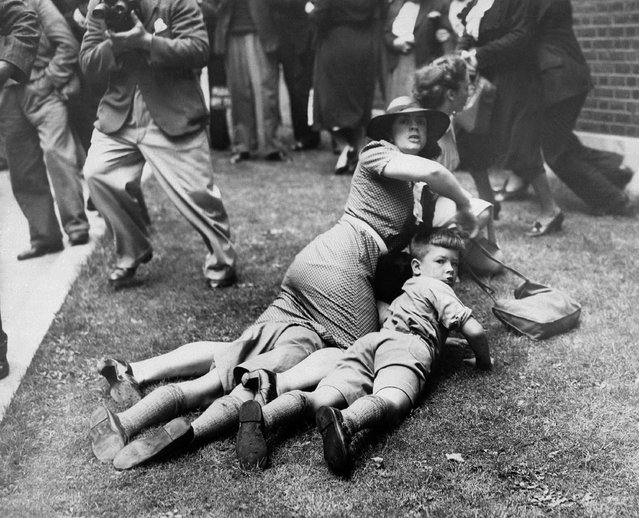 Woman threw herself to the ground with her children and partly across one child to guard it from what she thought might be a bomb explosion. The incident occurred in London, August 28, 1939, when a “Peace” agitator threw a number of rubber balls into a crowd of persons watching the arrival of ministers for a British Cabinet meeting. People fled in all directions believing that the balls were bombs. (Photo by AP Photo) 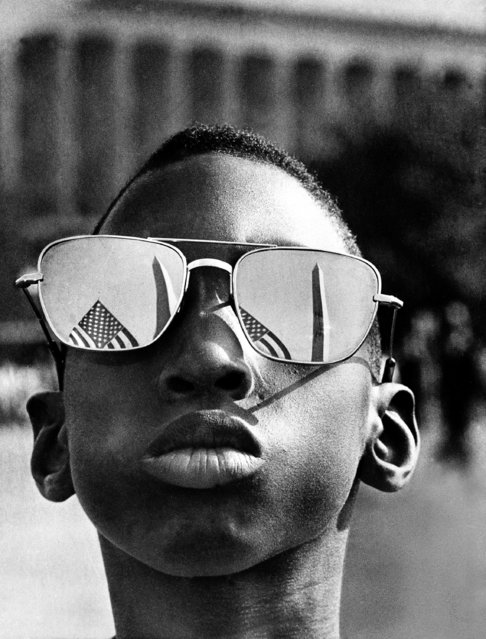 The top of the Washington Monument and part of a U.S. flag are reflected in the sunglasses of Austin Clinton Brown, 9, of Gainesville, Ga., as he poses at the Capitol where he joins others in the March on Washington, August 28, 1963. (Photo by AP Photo) An aerial view from a helicopter shows the March on Washington at Lincoln Memorial in D.C. on August 28, 1963. Over 250,000 people fighting for pending civil rights laws, such as desegregation, gathered at the Lincoln Memorial after a sign-carrying parade from the Washington Monument grounds. (Photo by AP Photo) Dr. Martin Luther King Jr. acknowledges the crowd at the Lincoln Memorial for his “I Have a Dream” speech during the March on Washington, D.C. August 28, 1963. (Photo by AP Photo) 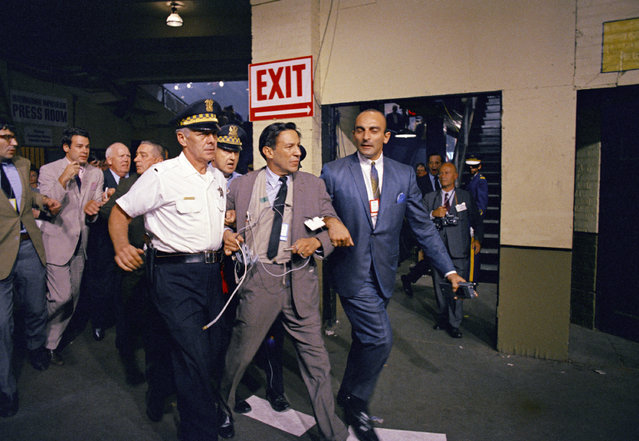 Mike Wallace, CBS-TV newsman, is hustled off the Democratic National Convention floor in the aftermath of a row between delegates and security officers during nominating session August 28, 1968 in Chicago. He was taken up a ramp to a second floor room. (Photo by AP Photo) 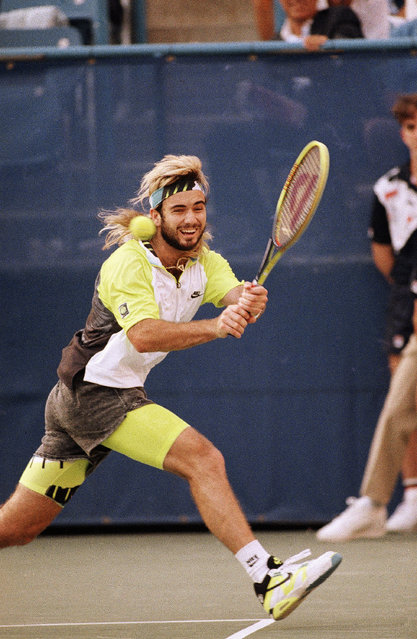 Andre Agassi of Las Vegas, Nevada is on the run as he returns a shot to his first round opponent Grant Connell of Vancouver, B.C. in their U.S. Open match, Tuesday, August 28, 1990 at the national Tennis Center. Agassi won 6-4, 6-2, and 6-2. (Photo by Elise Amendola/AP Photo) 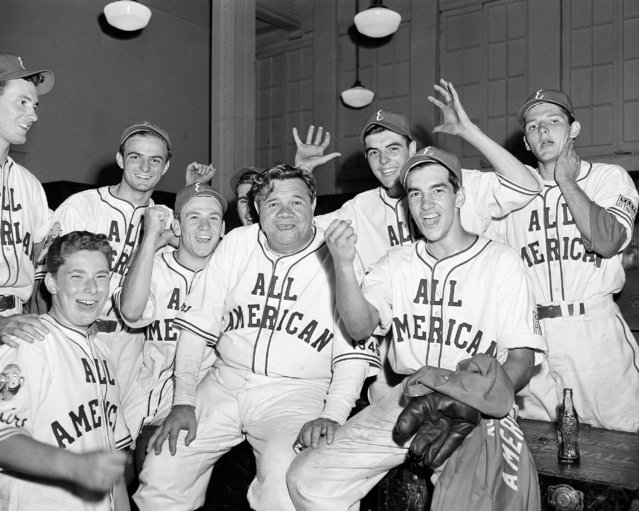 Yankees' legend Babe Ruth, center, is seen with some of his players on the All-American Boys East team as they cheer their 5-4 victory over the All-American West team in the second annual Esquire All-American baseball game at the Polo Grounds in New York, August 28, 1945. From left to right: mascot Harve Fischman, of Chicago, not wearing cap; Ted Mace of New Orleans; Bill Glane of Detroit; Eddie Coppinger, of Medford, Mass., behind Ruth; Ruth; Curtis Simmons of Egypt, Pa.; Joe Della Monica of Brooklyn, N.Y.; and Burt Stanford of Brimingham, Alabama. (Photo by Harry Harris/AP Photo) 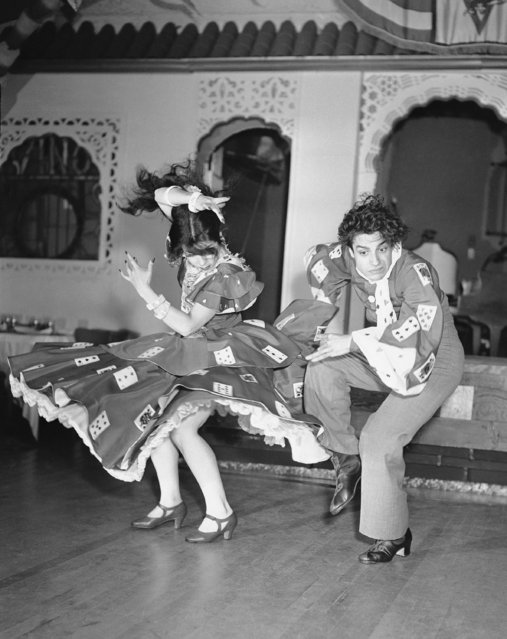 Rosario Perez and Antonio Ruiz are cousins who began to dance when they were kids in the streets of Sevelle in their native Andalusia. These photos of them, performing on a portable stage at the Latin sport, with a largely Latin audience on August 28, 1943, show steps from dances interpretative of various South American countries. (Photo by AP Photo/DG) 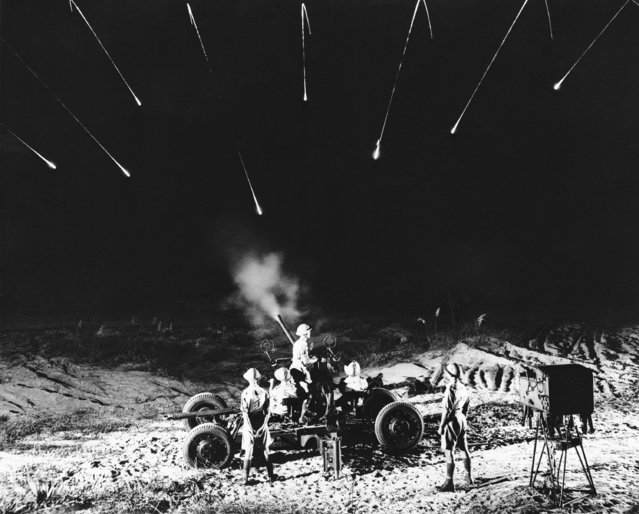 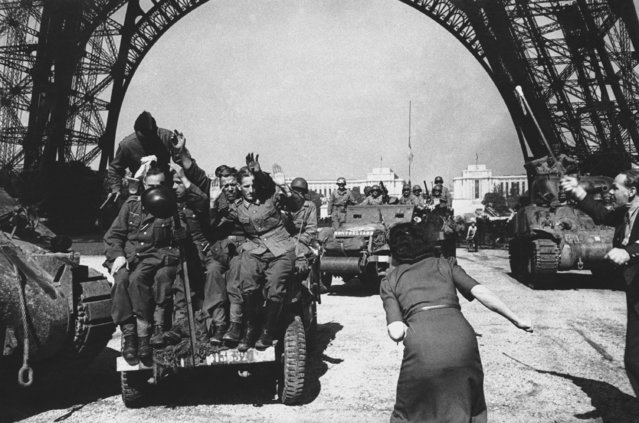 Nazi prisoners shrink from jeering Parisians as they are driven under the Eiffel Tower under the guard of the first U.S. troops to enter Paris on August 28, 1944. (Photo by AP Photo) 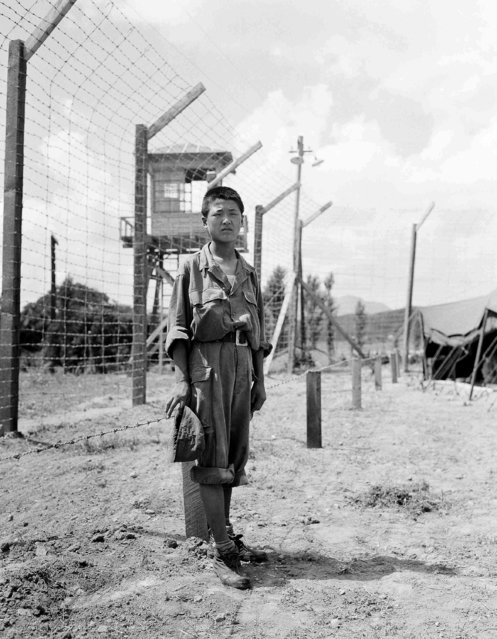 A 14-year-old North Korean prisoner, first captive to be processed in this camp, stands inside barbed-wire fence at a prisoner of war enclosure in Korea on August 28, 1950. Location unknown. (Photo by Max Desfor/AP Photo) 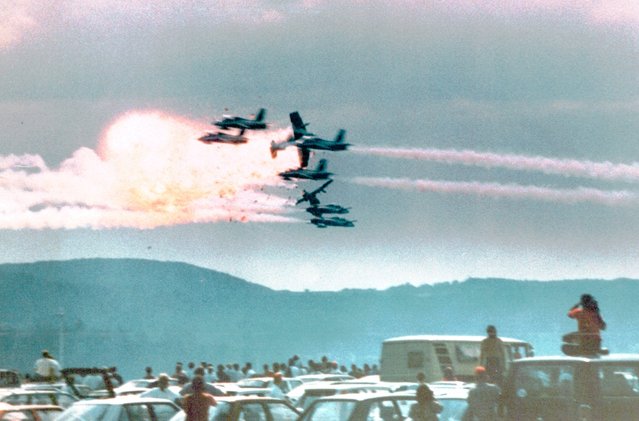 Three Italian jets collide at an air show in Ramstein Air Base, Germany, on August 28, 1988. One jet exploded in flames and plowed into the large crowd, killing 70 and injuring over 400. Ten years after the disaster survivors for the first time are seeking to win compensation for their emotional suffering. (Photo by Charles Daughty/AP Photo) 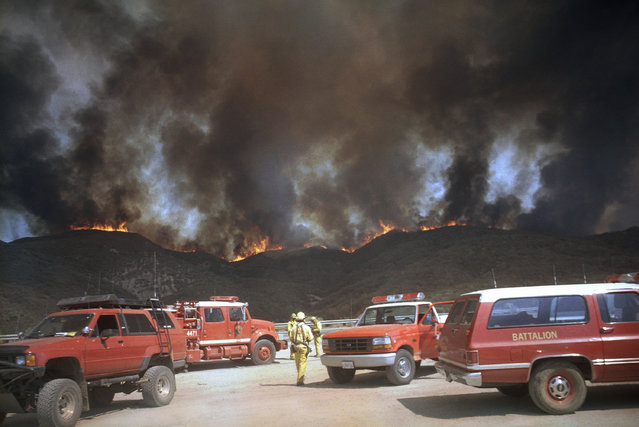