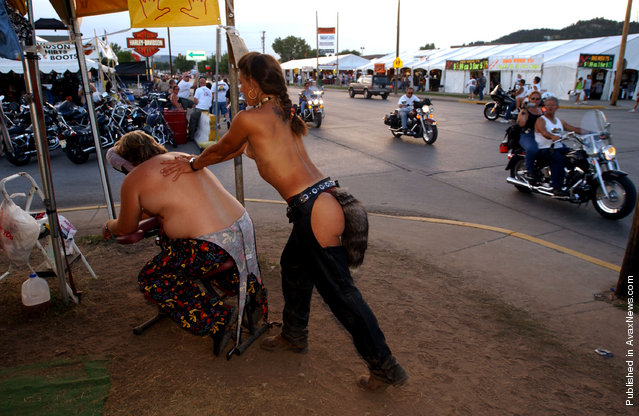 A man recieves a massage from a topless woman wearing a foxtail during the 61st annual Sturgis Motorcycle Rally August 7, 2001 in Sturgis, SD. Nudity is not permitted by the police, but airbrushing a woman''s nipples is sufficient to remain legal in the small town of 6,000. (Photo by David McNew/Getty Images) 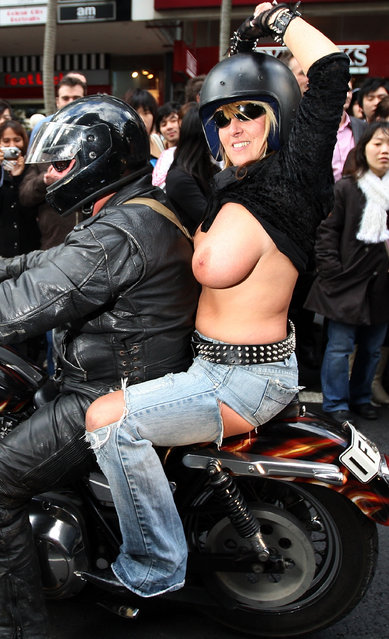 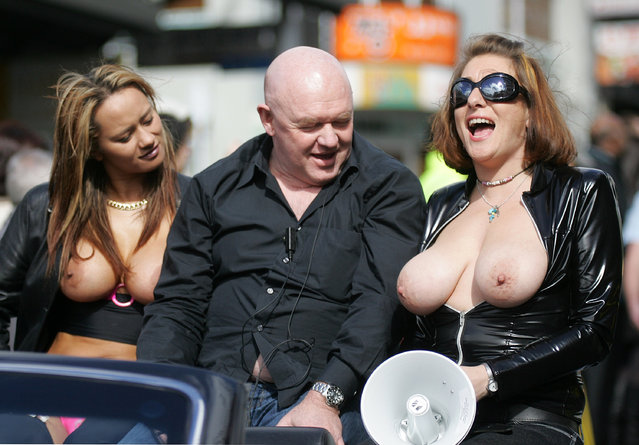 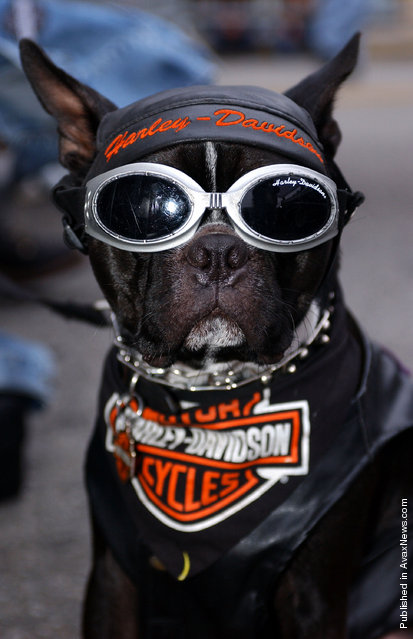 Biker Dog “Bandit” poses at the Love Ride 20 at Harley-Davidson/Buell of Glendale on November 9, 2003 in Glendale, California. The yearly motorcycle cruise and concert hosted by Grand Marshal Jay Leno benefits the Muscular Dystrophy Association, Reading by 9 and other charities. (Photo by Amanda Edwards/Getty Images) Burly American actor Marlon Brando sitting astride his motorbike in a scene from the classic film “The Wild One”, directed by Laslo Benedek for Columbia. (Photo by Central Press/Getty Images). 1954 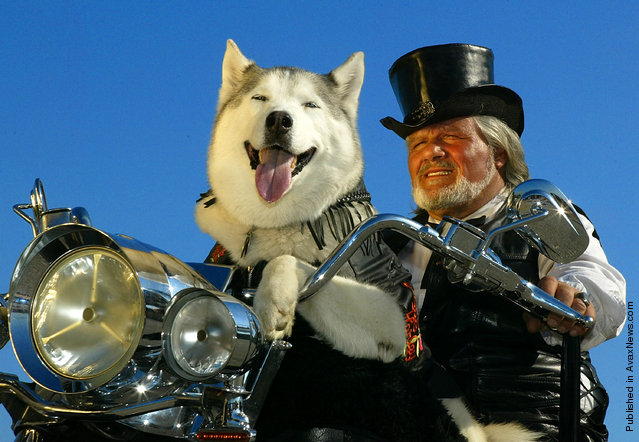 Jeremiah Gerbracht trained his Siberian Husky, Lady Harley, to ride on the gas tank of his Harley Davidson and he poses for a photo at New Leash on Life's “Nuts for Mutts” event on March 14, 2004 in Los Angeles, California. Money is rasied to help adopt and protect dogs in the greater Los Angeles area. (Photo by Carlo Allegri/Getty Images) 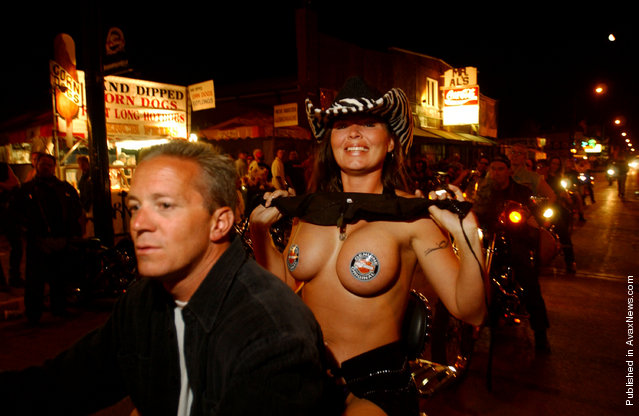 Main Street is the place to see and be seen while cruising at the 61st annual Sturgis Motorcycle Rally, August 10, 2001, in Sturgis, SD. (Photo by David McNew/Getty Images) 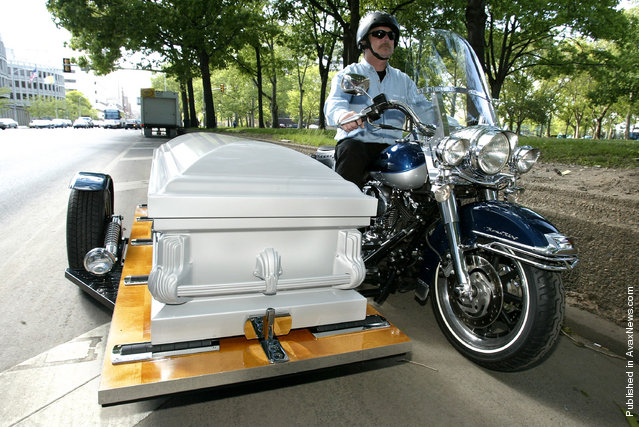 Albert F. Skinner rides his 2000 Harley Hearse May 3, 2002 in Philadelphia, PA. Skinner's company, Biker Burials in Wrightsville, PA offers an alternative to the traditional hearse for motorcycle enthusiasts or those in search of an extraordinary farewell. (Photo by Don Murray/Getty Images) 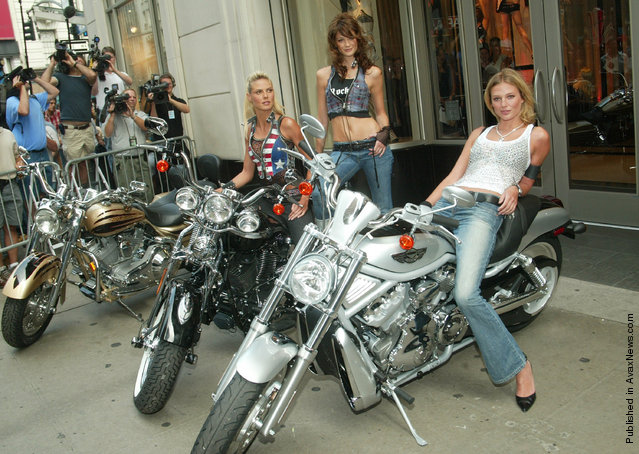 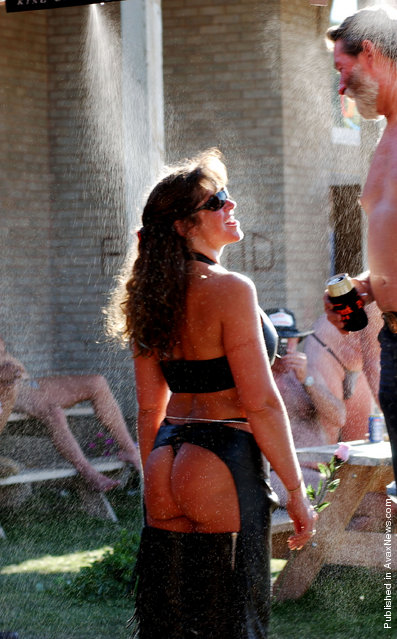 Kathy Alexander, of Golden, Colorado, stands under misters as the outdoor temperature rises into the hundreds during the 61st annual Sturgis Motorcycle Rally August 7, 2001in Sturgis, SD. Some one half-million motorcyclists are expected attend the week-long rally in a town whose residential population is about 6,000. (Photo by David McNew/Getty Images) 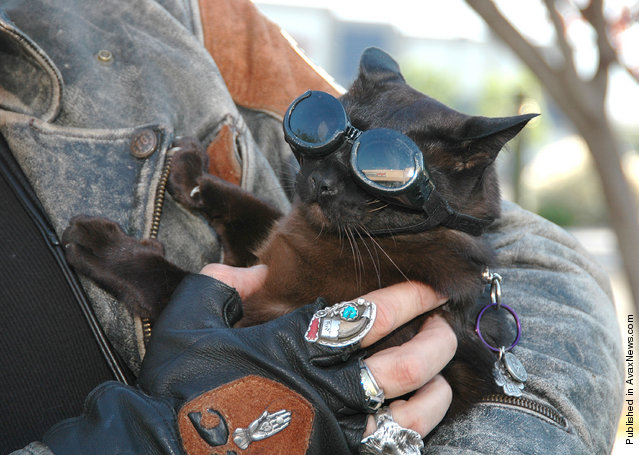 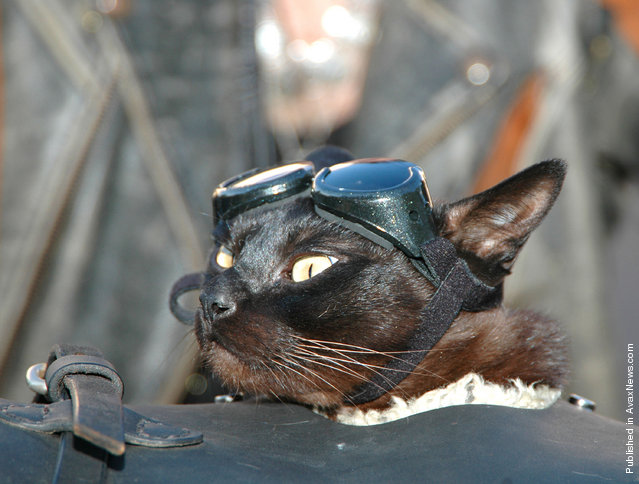 Actor and Director Christopher Coppola and “Biker Cat Otto” prepare to lead The Duke City Shootout “Biker Bonanza” from Albuquerque to Roswell July 19, 2005 in Albuquerque, New Mexico. The Duke City Shootout is a week-long movie-making competition dedicated to training aspiring artists in the use of digital technology. Christopher Coppola is the founder of the event which is held annually in Albuquerque. (Photo by Steve Snowden/Getty Images) 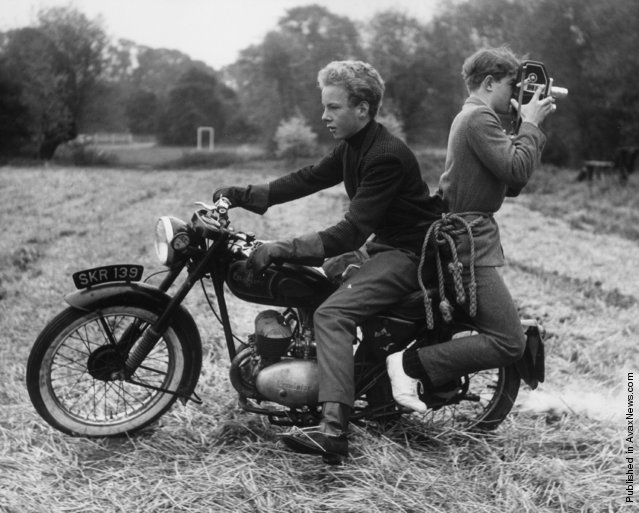 Rupert Gosling of Eton College Film Unit is determined to get full coverage of the annual College Steeplechase whilst riding on the pillion of a motorcycle at the start of the race. (Photo by Douglas Miller/Keystone/Getty Images). 12th October 1965 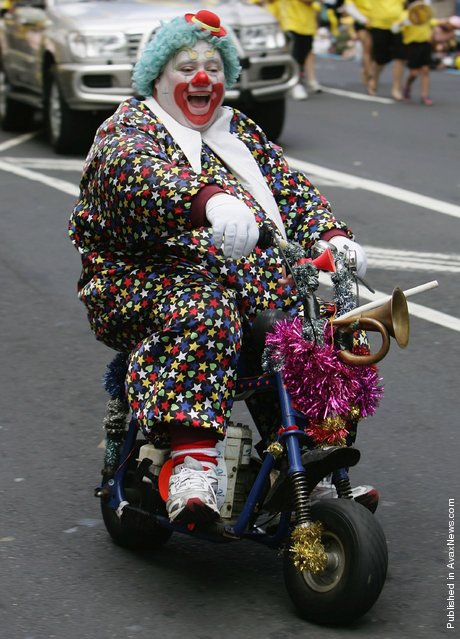 A clown drives his bike down Queen Street during the Farmers Santa Parade November 26, 2006 in Auckland New Zealand. (Photo by Phil Walter/Getty Images) 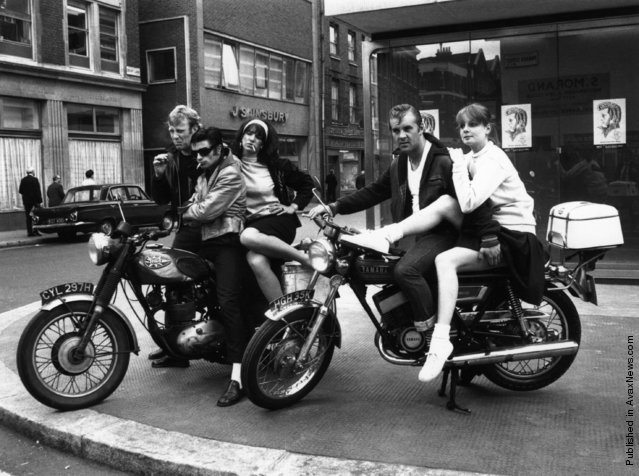 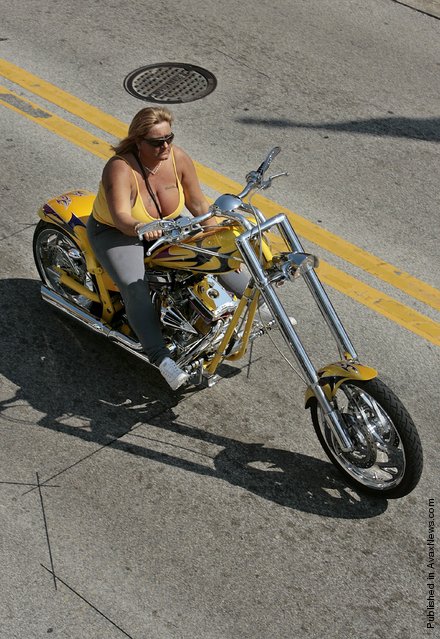 Debbie Conrad of Branchville, NJ, rides her Iron Horse custom chopper down Main Street during the first official day of Bike Week March 3, 2006 in Daytona Beach, Florida. Conrad has been to every Bike Week since 1979. More than 500,000 people are expected to attend the 65th anniversary of Bike Week, a gathering of motorcycle riders and fans from all over the world. The event leads up to the Daytona 200 race on March 11, 2006. (Photo by Chip Somodevilla/Getty Images) 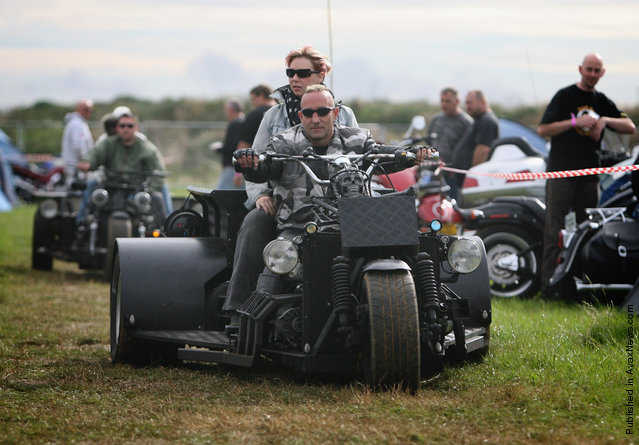 A motorcycle enthusiast rides his custom-made bike in the camping fields at the Bulldog Bash on August 9 2008 in Stratford-upon-Avon, Warwickshire, England. The police has spent 1.4 million GBP on security at the motorbike festival, organised annually by the Hell's Angels, following the murder of Hell's Angel Gerry Tobin at last year's event. (Photo by Matt Cardy/Getty Images) 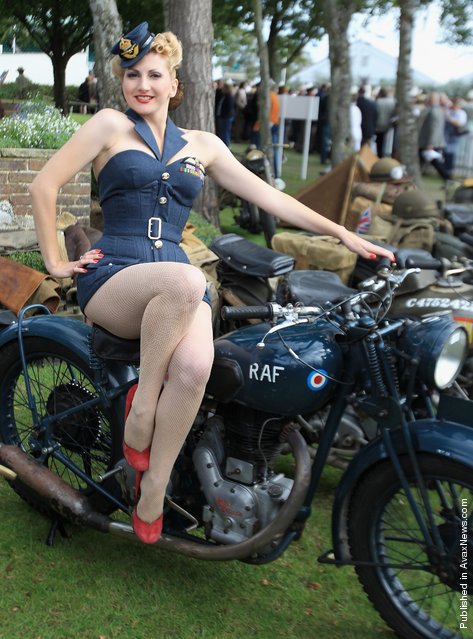 Kitten Von Mew poses for a photograph on a vintage RAF bike during Goodwood Revival 2010 at Goodwood on September 17, 2010 in Chichester, England. The event is based around a classic car race meeting and airshow but celebrates all things 1945 until 1966. (Photo by Chris Jackson/Getty Images for Goodwood) 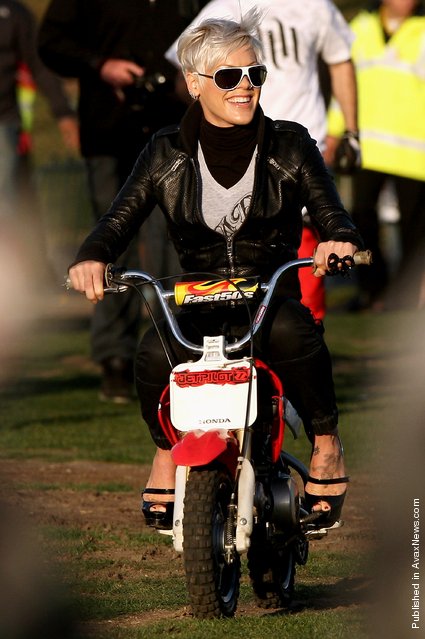