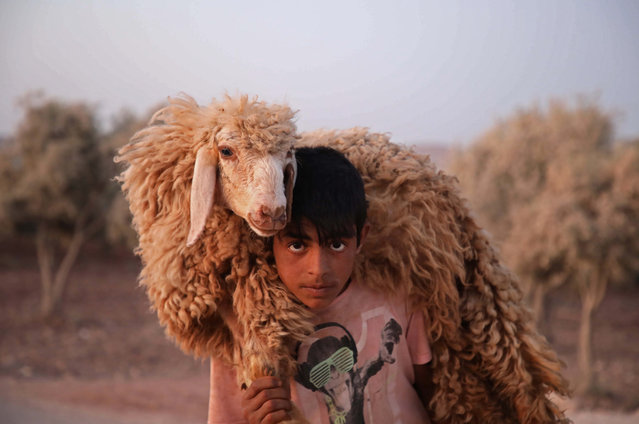 A Syrian child holds a sheep at the Atmah camp in the northwestern Idlib province, on August 07, 2019. (Photo by Aaref Watad/AFP Photo) 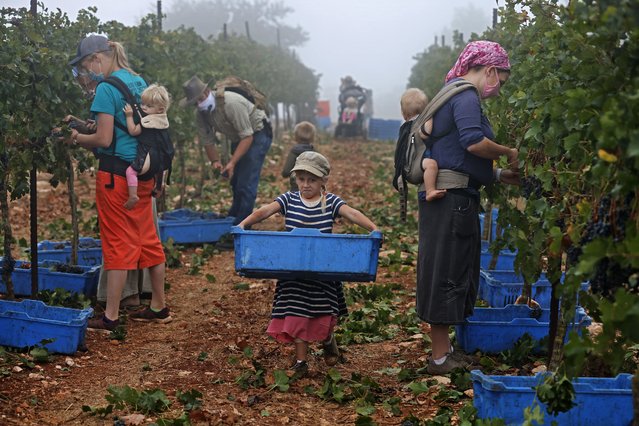 Evangelist Christian volunteers harvest Merlot wine grapes on September 23, 2020, for the Israeli family-run Tura Winery, in the estate's vineyards located at the occupied West Bank Har Bracha settlement. The Evangelist Christian non-profit organisation HaYovel has had a presence of more than 1800 volunteers in the past 12 years, helping Jewish farmers in the occupied West Bank in their vineyards, with the aim of fulfilling the prophetic restoration of the Land of Israel, believing that the road to Redemption passes through the vineyards of Samaria. (Photo by Menahem Kahana/AFP Photo) 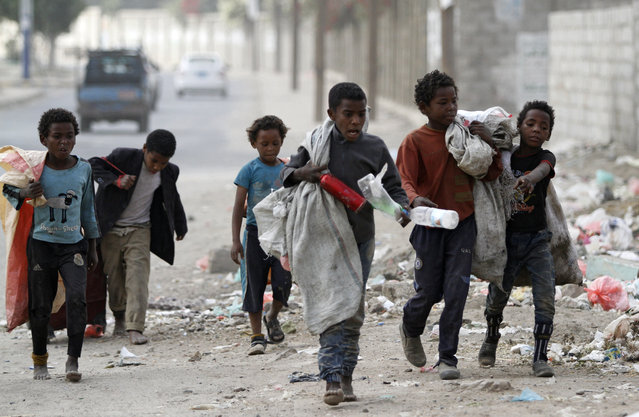 Children walk as they collect empty plastic bottles in a street in Sanaa, Yemen on November 21, 2019. (Photo by Mohamed al-Sayaghi/Reuters) 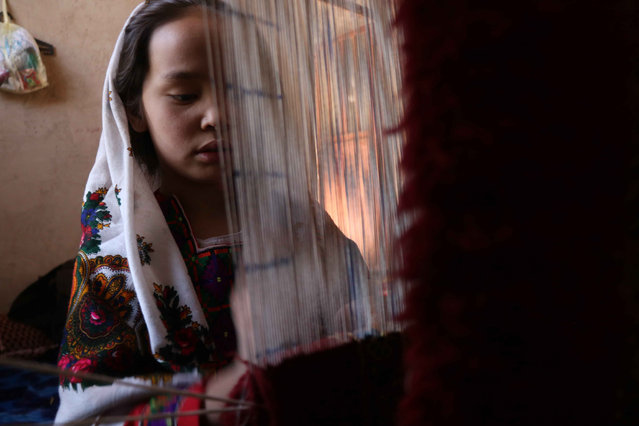 An Afghan girl works at a carpet loom in Herat, Afghanistan, 28 September 2020. Nearly 19 years after the fall of the Taliban regime and the United States invasion, the Afghan government and insurgents on 12 September, began peace negotiations in Doha. Unlike the Taliban team, the 21-member negotiating group sent by Kabul includes four women, who will look to safeguard the progress on women's rights since the fall of the Taliban regime that had prevented girls from going to schools and confined women to their homes. (Photo by Jalil Rezayee/EPA/EFE) 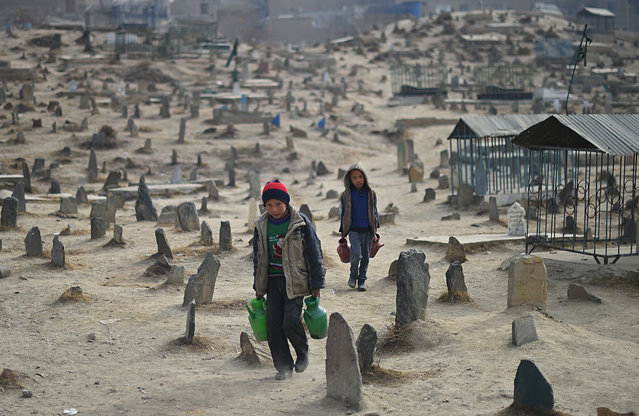 Afghan children who work as water vendors search for customers at the Kart-e-Sakhi cemetery in Kabul on January 12, 2015. Thousands of victims of the country's civil war which raged from 1992 to 1996 are buried in cemetries across the Afghan capital. (Photo by Shah Marai/AFP Photo) 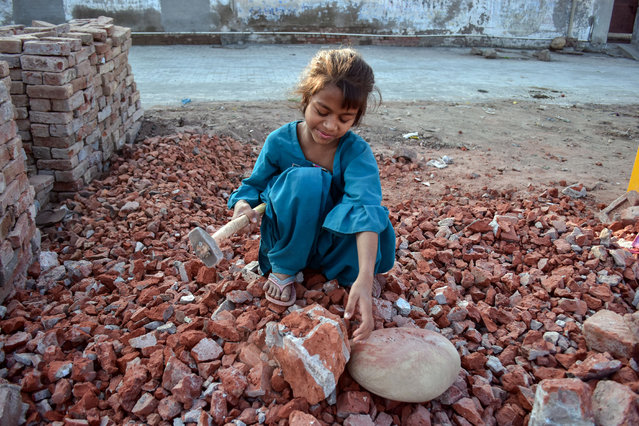 A young girl works at a construction site in Patiala district, Rajpura, India on November 20, 2019. (Photo by Saqib Majeed/Barcroft Media) 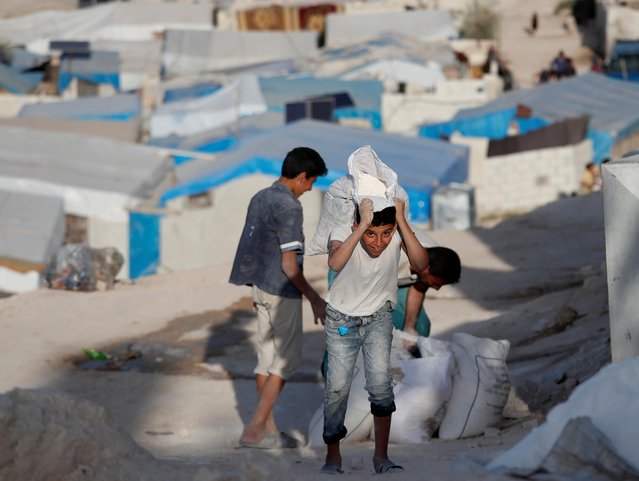 A boy carries a bag in Atmah IDP camp located near border with Turkey, Syria September 25, 2019. (Photo by Goran Tomasevic/Reuters) 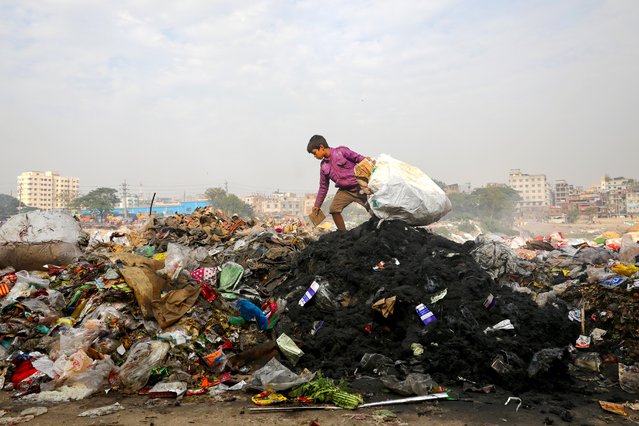 A boy collects materials from waste dumped in the bank of Buriganga River in Dhaka, Bangladesh on January 2, 2020. (Photo by Mohammad Ponir Hossain/Reuters) 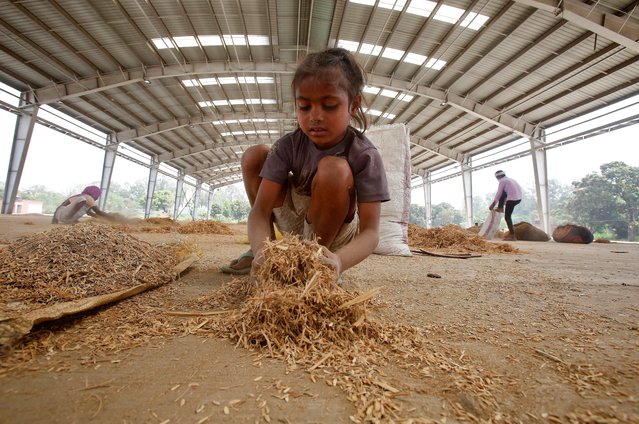 Pooja, 8, daughter of a daily wage worker who used to work at a wholesale grain market, collects leftover paddy from the empty wholesale market during an extended nationwide lockdown to slow the spreading of coronavirus disease (COVID-19), in Chandigarh, April 16, 2020. (Photo by Ajay Verma/Reuters) Abdou Fatao Pafadenam, 11, wraps stone blocks in his t-shirt in Pissy informal granite quarry since schools closed, amid the outbreak of the coronavirus disease (COVID-19), in Ouagadougou, Burkina Faso June 12, 2020. Youth can legally work at the site at age 16. But despite the law, some 42% of Burkinabe children between the ages of 5 and 14 engage in some form of labor including back-breaking work in quarries, gold mines and cotton fields, according to a 2018 report by the U.S. Bureau of International Labor Affairs. (Photo by Anne Mimault/Reuters) 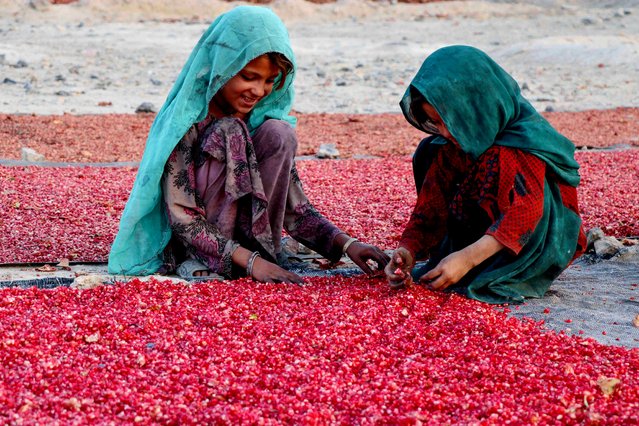 Afghan children's sort pomegranate seeds for export in Kandahar, Afghanistan, 26 November 2020. Kandahar is famous all over Afghanistan for its high quality pomegranates, which are now being exported to different countries. (Photo by Muhammad Sadiq/EPA/EFE) 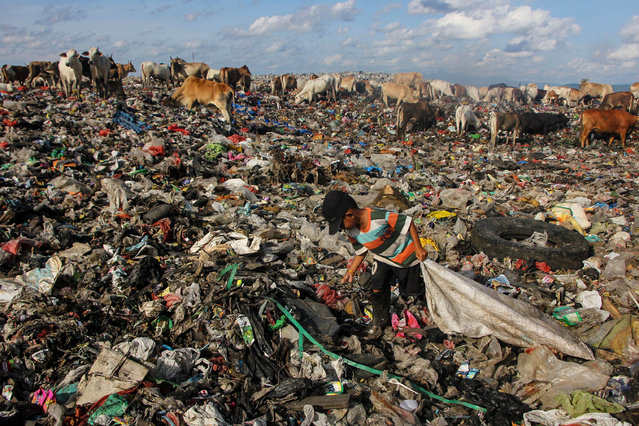 A boy searches for useable items at a garbage dump in Antang, Indonesia on January 26, 2022. (Photo by Andri Saputra/AFP Photo) 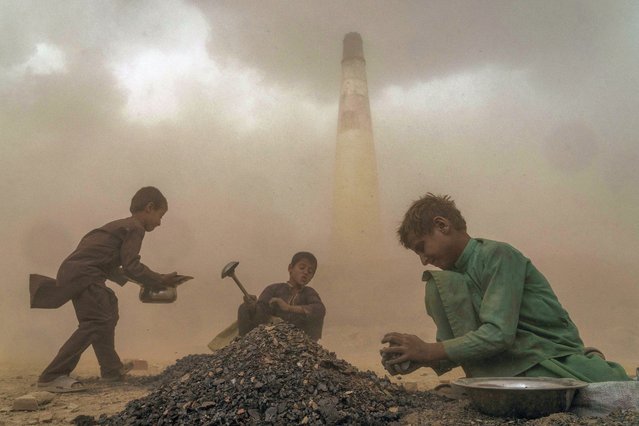 Afghan children work in a brick factory, on the outskirts of Kabul, Afghanistan, Saturday, August 20, 2022. Aid agencies say the number of children working in Afghanistan is growing ever since the economy collapsed following the Taliban takeover more than a year ago. (Photo by Ebrahim Noroozi/AP Photo) 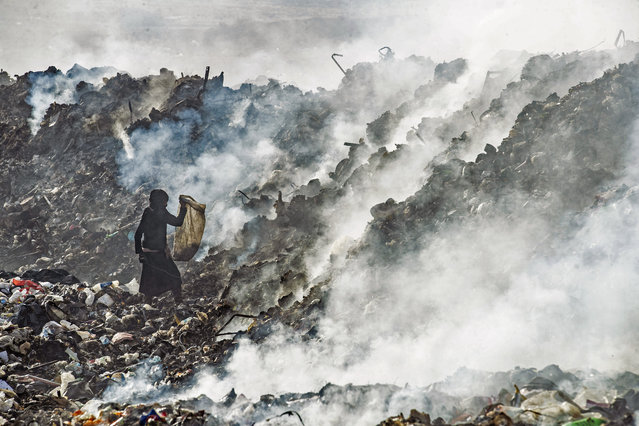 A Syrian youth sifts through a garbage dump near an oil field in the countryside of Malikiya in northeast Syria, on January 12, 2021. On the dry plains outside the city of Al-Malikiyah, a dozen people wrapped up against the cold rip open the black plastic bags, in a desperate search for something to sell, repurpose or even eat. Across the road, an oil pump swings back and forth in this resource-rich region controlled by US-backed Kurdish forces. (Photo by Delil Souleiman/AFP Photo) 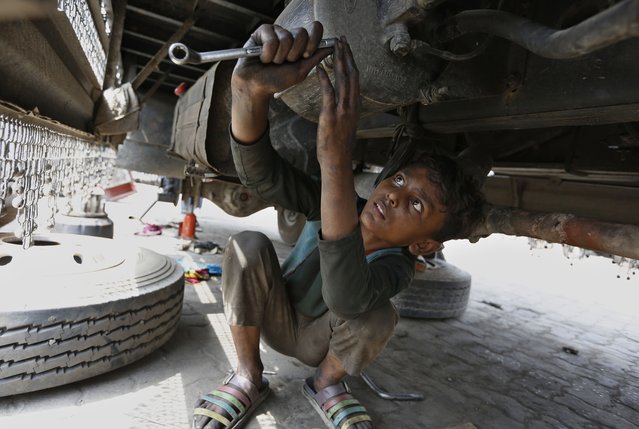 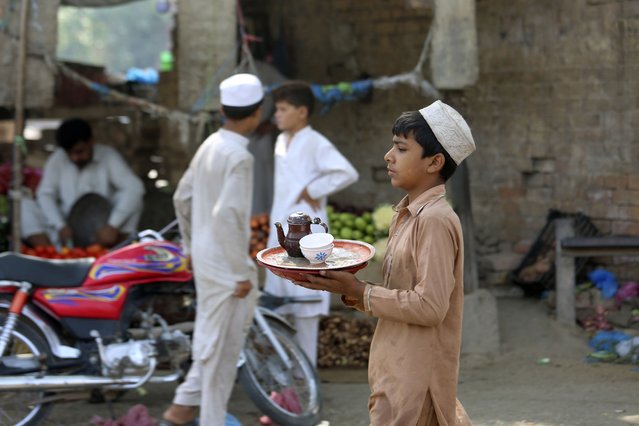 A Pakistani boy works at a tea shop in Peshawar, Pakistan, Sunday, June 12, 2022. Planning Minister Ahsan Iqbal in Pakistan's newly elected government faced criticism Wednesday, June 15, 2022, following his plea to the nation to drink less tea to help save on imports amid a deepening economic crisis. Pakistan is among the world's top tea importers, a hugely popular drink among both the rich and the poor in this country of 220 million people. (Photo by Mohammad Sajjad/AP Photo/File) 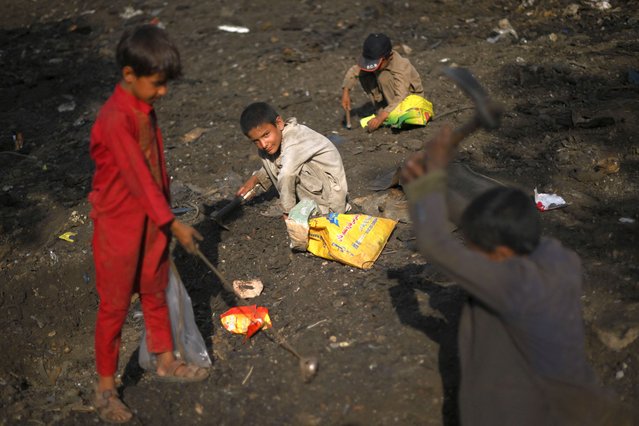 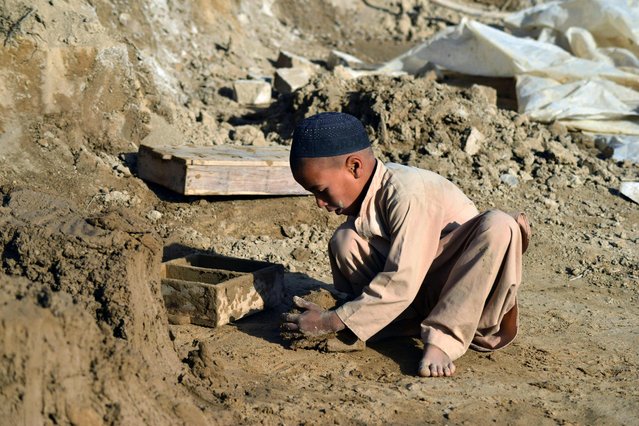 A child makes clay bricks with a mould at a brick kiln in Kandahar on November 11, 2021. (Photo by Javed Tanveer/AFP Photo) 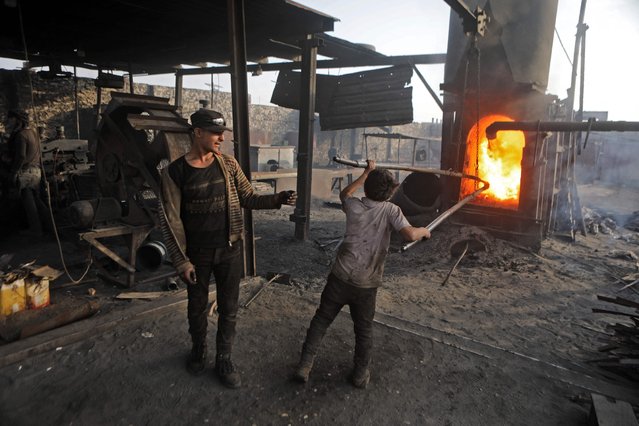 Syrian youths work at a scrapyard in the Turkish-controlled northern city of al-Bab, on November 18, 2021. After a decade of war, an estimated 2.5 million children in Syria are out of school with another 1.6 million at risk of dropping out, according to the UN's children agency UNICEF. As it marked World Children's Day on November 20, the agency estimated that nine in ten children live in poverty and more than 5,700 children – some as young as seven – were recruited into the fighting. (Photo by Bakr Alkasem/AFP Photo) 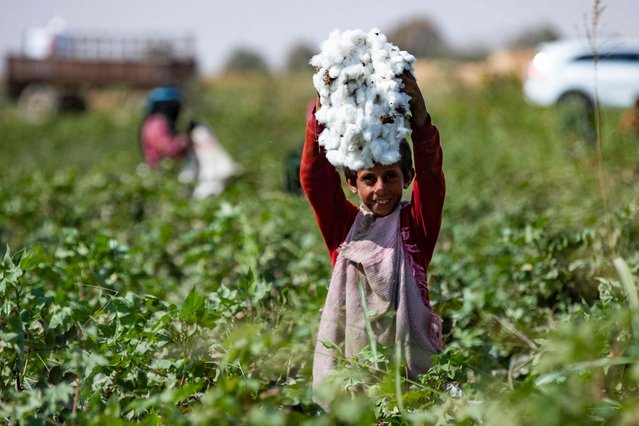 A boy holds a handful of harvested cotton in a field in the countryside of Raqa in northern Syria on September 19, 2022 as the cotton is later transported to warehouses under control of the Syrian Kurdish administration. (Photo by Delil Souleiman/AFP Photo)
Edit Del
22 Oct 2022 04:39:00, post received 0 comments
Publication archive:
←   →
Popular tags:
All tags
Last searches: