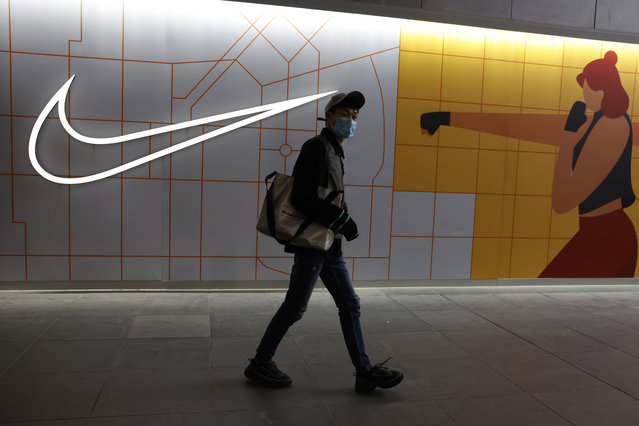 A visitor to a mall wearing a mask past by a Nike store in Beijing on Monday, March 29, 2021. (Photo by Ng Han Guan/AP Photo) 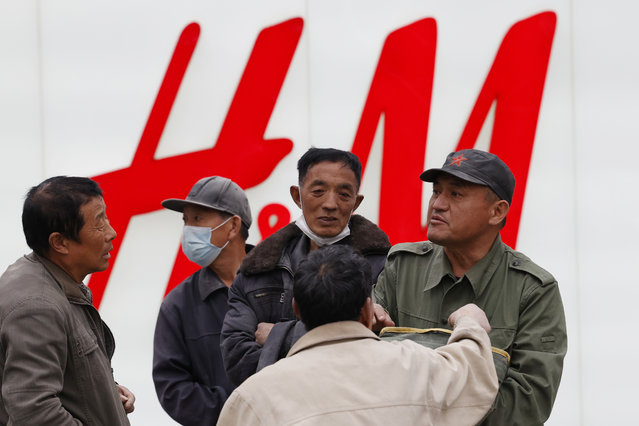 Migrant workers gather near an H&M store in Beijing on Monday, March 29, 2021. China stepped up pressure Monday on foreign shoe and clothing brands to reject reports of abuses in Xinjiang, telling companies that are targeted by Beijing for boycotts to look more closely and pointing to a statement by one that it found no forced labor. (Photo by Ng Han Guan/AP Photo) 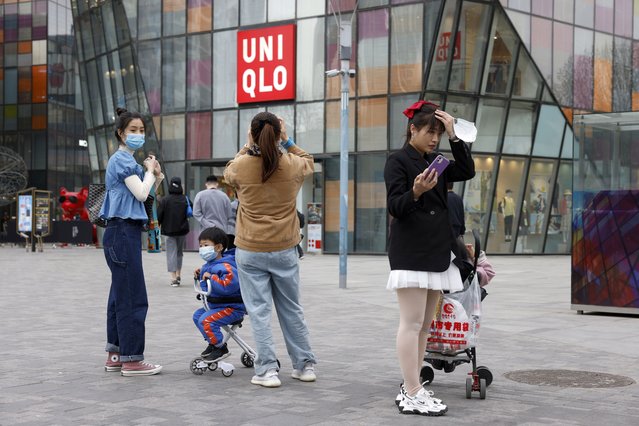 Visitors to a shopping mall wearing masks stand before a Uniqlo store in Beijing on Monday, March 29, 2021. (Photo by Ng Han Guan/AP Photo) 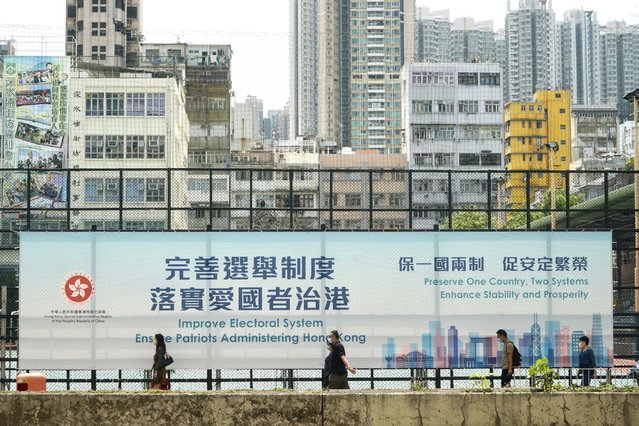 People walk past a government advertisement to promote the new Hong Kong electoral system reform, in Hong Kong, March 30, 2021. China's top legislature approved amendments to Hong Kong's constitution on Tuesday that will give Beijing more control over the make-up of the city's legislature. (Photo by Kin Cheung/AP Photo) 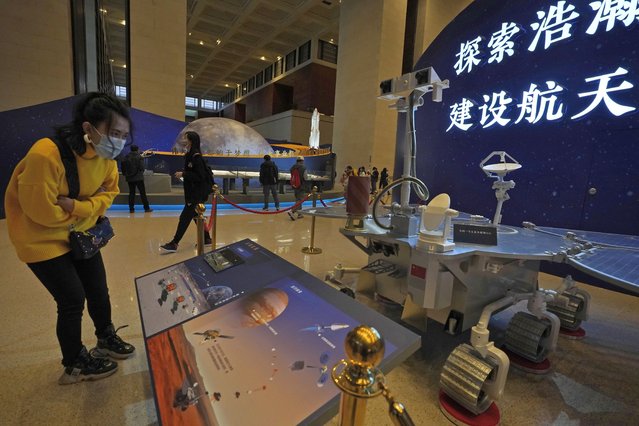 A visitor to an exhibition looks at a display with a replica of the Chinese Mars Rover of the Tianwen-1 spacecraft in Beijing on March 12, 2021. China's National Space Agency confirmed Wednesday, March 31, 2021 that it had working-level meetings and communications with NASA from January to March “to ensure the flight safety” of their crafts. (Photo by Ng Han Guan/AP Photo) 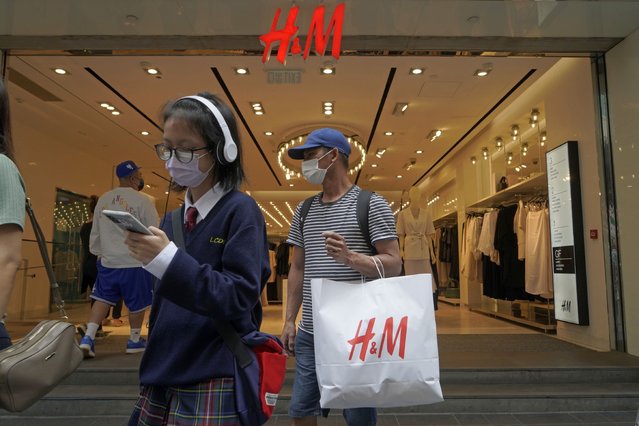 A man shops at an H&M clothing store in Hong Kong, Saturday, March 27, 2021. H&M disappeared from the internet in China as the government raised pressure on shoe and clothing brands and announced sanctions Friday, March 26, 2021, against British officials in a spiraling fight over complaints of abuses in the Xinjiang region. (Photo by Kin Cheung/AP Photo) 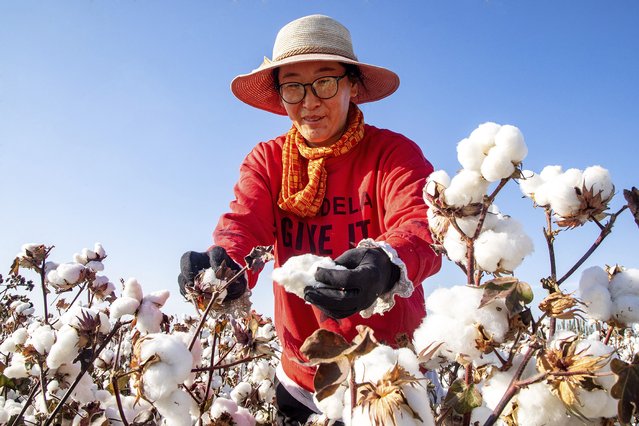 A cotton picker works in the field in Hami in northwest China's Xinjiang region Friday, October 09, 2020. H&M products were missing from major e-commerce platforms including Alibaba and JD.com following calls by state media for a boycott over the Swedish retailer's decision to stop buying cotton from Xinjiang. (Photo by Chinatopix via AP Photo) 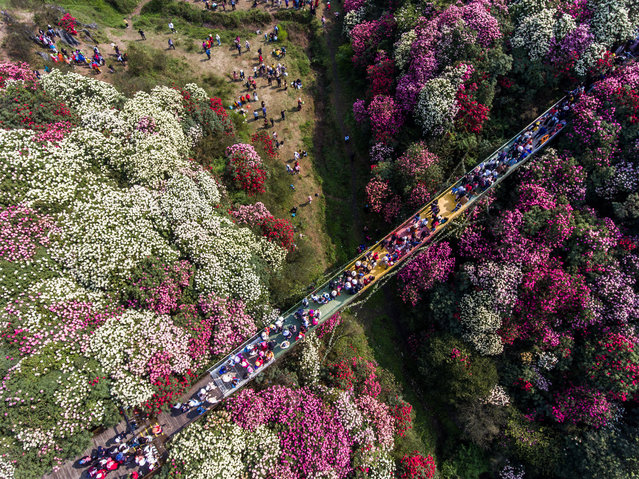 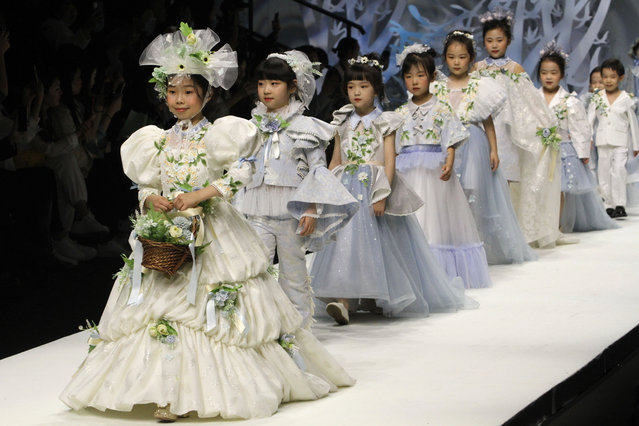 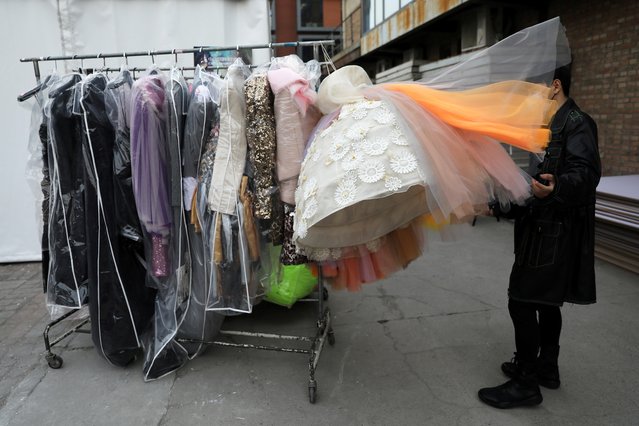 A man sorts a designer's creations on clothes hanger outside a venue for fashion shows during China Fashion Week, in Beijing, China on March 30, 2021. (Photo by Tingshu Wang/Reuters) 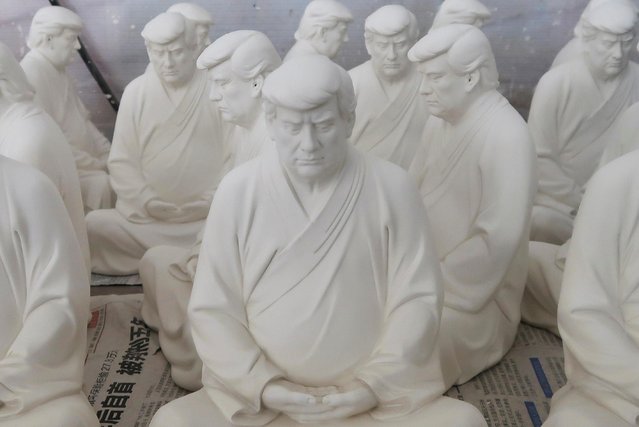 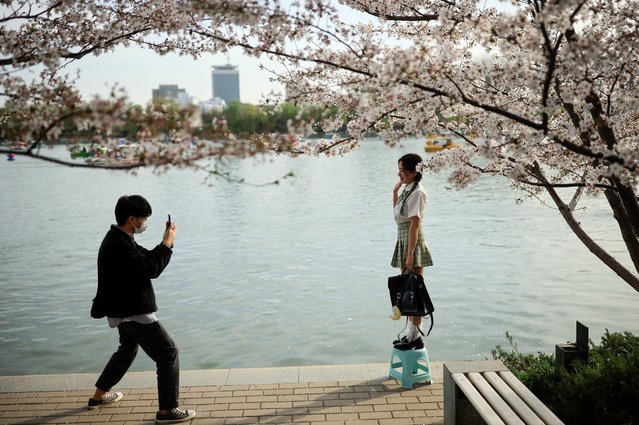 People take a photo next to a blooming tree during cherry blossom season in Yuyuantan Park in Beijing, China, March 31, 2021. (Photo by Thomas Peter/Reuters) 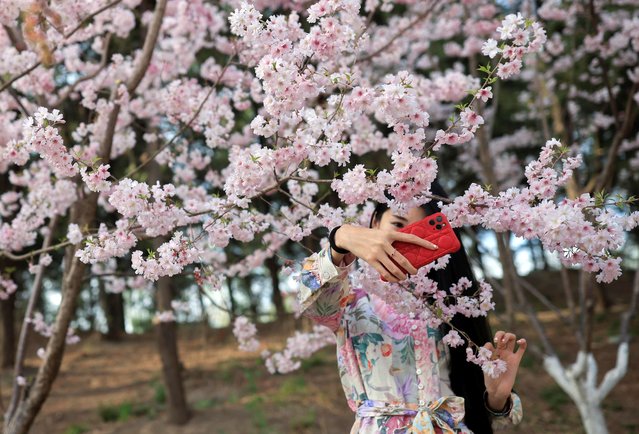 A woman takes a photo amid blooming trees during cherry blossom season in Yuyuantan Park in Beijing, China, March 31, 2021. (Photo by Thomas Peter/Reuters) 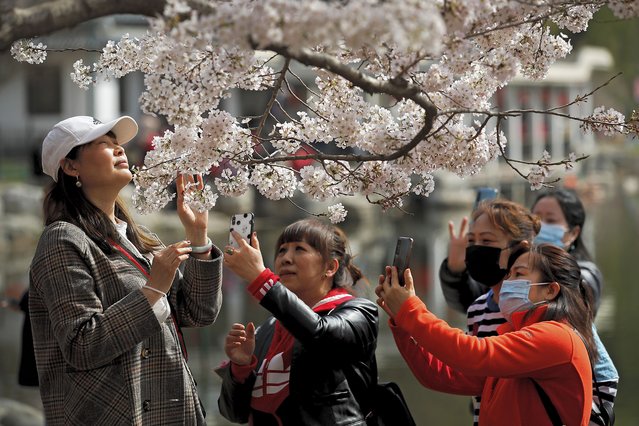 Visitors, some wearing face masks, take smartphone photos of their friend poses near cherry blossoms at the Yuyuantan Park during a spring festival in Beijing, Tuesday, March 30, 2021. People visited the park, which has more than thousands of cherry trees, for the popular annual cherry blossoms festival. (Photo by Andy Wong/AP Photo) 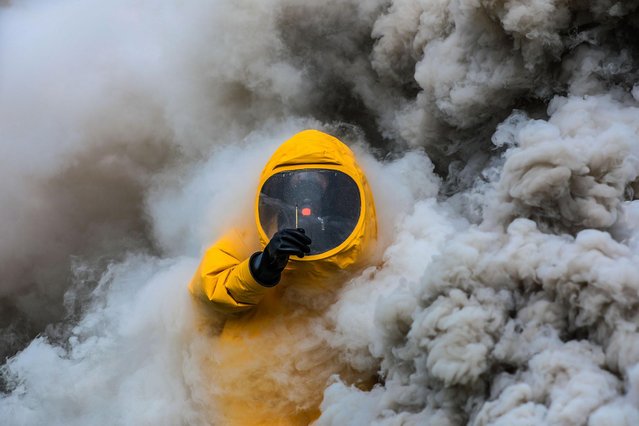 An armed policeman moves through a simulated contamination area during a drill on March 19, 2021 in Guangzhou, Guangdong Province of China. (Photo by Yan Yicheng/VCG via Getty Images) 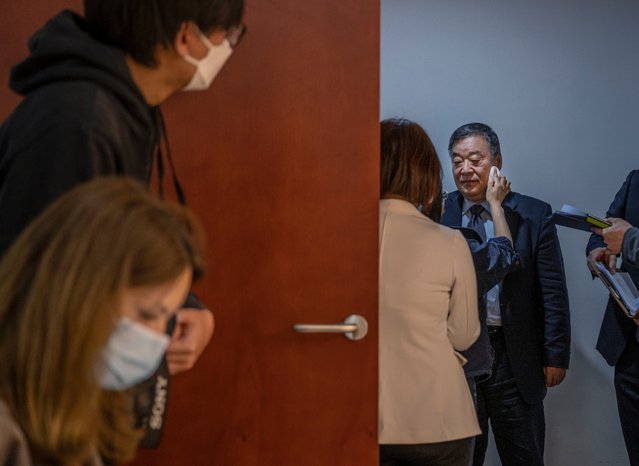 Head of the Expert Group on Covid Response at China's National Health Commission Liang Wannian, right, has make-up put on before a press conference addressing the World Health Organization (WHO) report on the origins of SARS-CoV-2, at the National Health Committee on March 31, 2021 in Beijing, China. (Photo by Kevin Frayer/Getty Images) 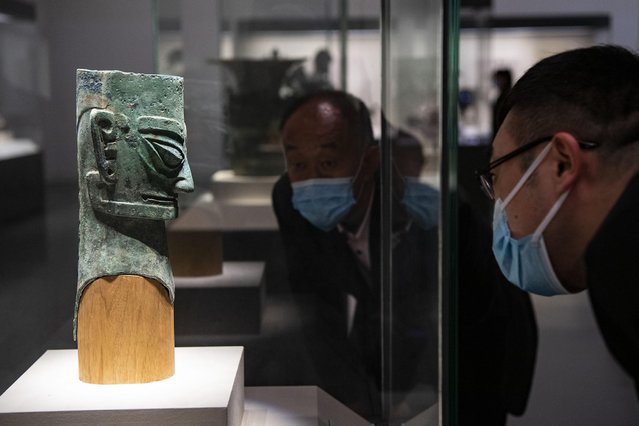 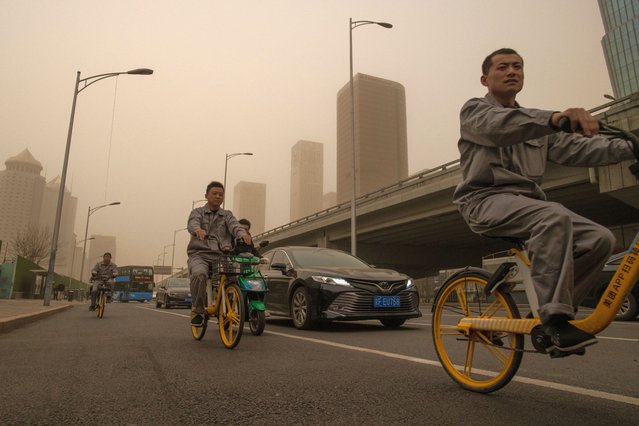 People ride bicycles in the Central Business District (CBD) area amid a sandstorm in Beijing, China, 28 March 2021. A new sandstorm hit Beijing on 28 March as the city was already in the grip of high air pollution levels. (Photo by Roman Pilipey/EPA/EFE) 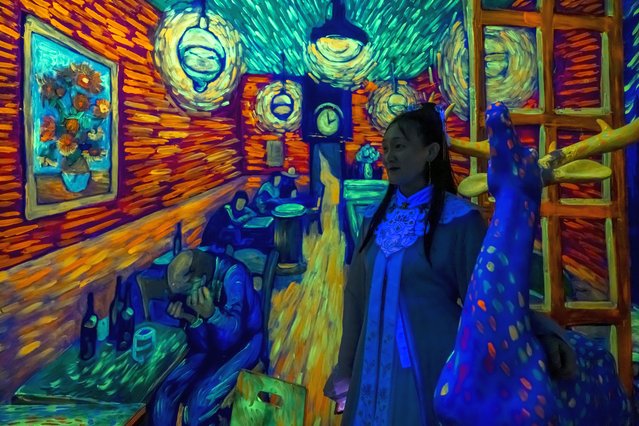 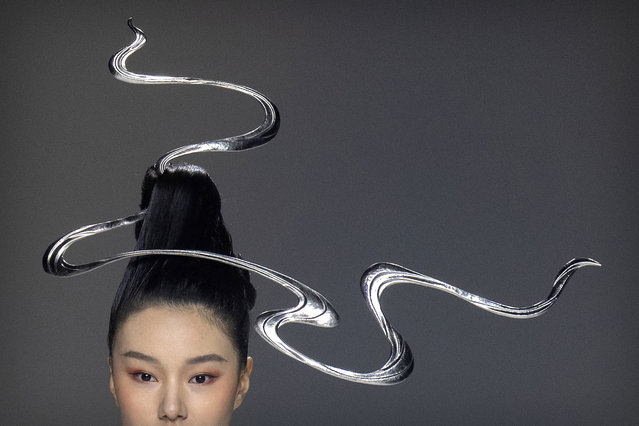