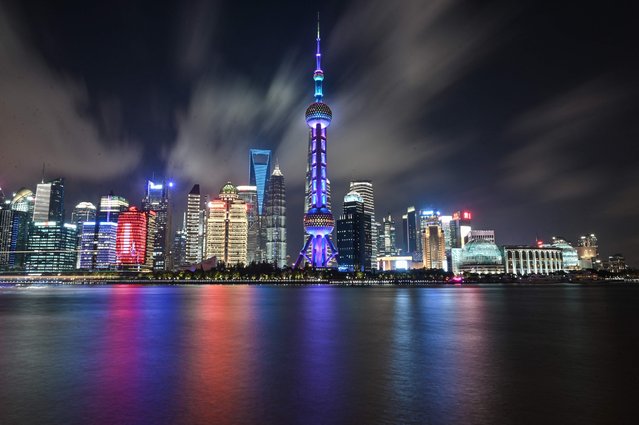 Children attend the First Writing Ceremony, a traditional education activity for children who will start their school life in China, at Liangcai School on October 9, 2021 in Bijie, Guizhou Province of China. (Photo by Luo Dafu/VCG via Getty Images) 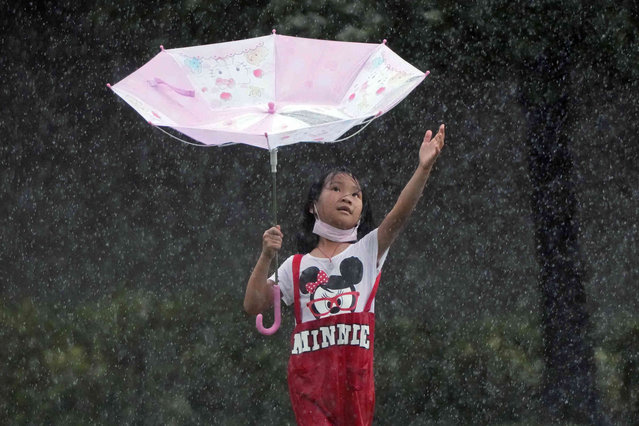 A girl braves the rain at a park near the waterfront of Victoria Harbour in Hong Kong, Saturday, October 9, 2021. The Hong Kong Observatory issued the number 8 storm signal, as the tropical storm Lionrock was southwest of the regional financial hub, which has a population of 7.5 million. (Photo by Kin Cheung/AP Photo) 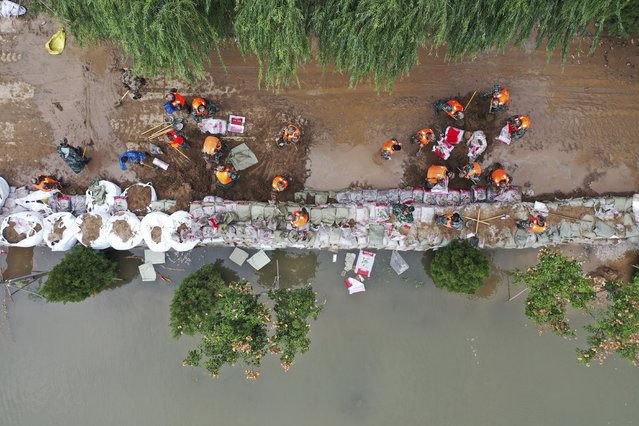 In this photo released by Xinhua News Agency, an aerial photo shows rescuers fortifying a temporary dyke against the flooding at the Lianbo Village in Hejin City, in northern China's Shanxi Province, Sunday, October 10, 2021. (Photo by Zhan Yan/Xinhua via AP Photo) 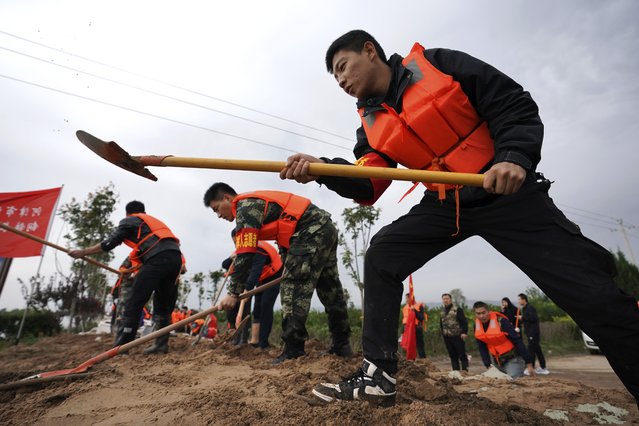 In this photo released by Xinhua News Agency, rescuer workers fortify a temporary dyke against the flooding at the Lianbo Village in Hejin City, in northern China's Shanxi Province, Sunday, October 10, 2021. (Photo by Zhan Yan/Xinhua via AP Photo) 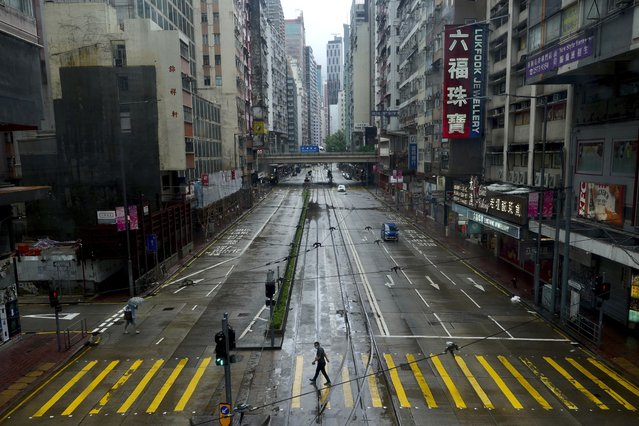 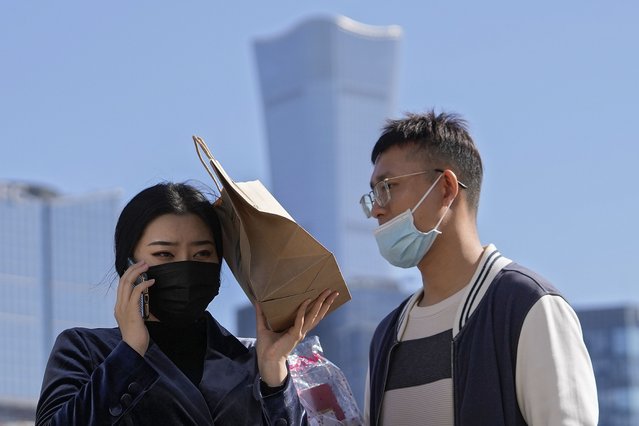 A man and a woman wearing face masks to help curb the spread of the coronavirus, walk across an intersection against the Central Business District in Beijing, Tuesday, October 12, 2021. (Photo by Andy Wong/AP Photo) 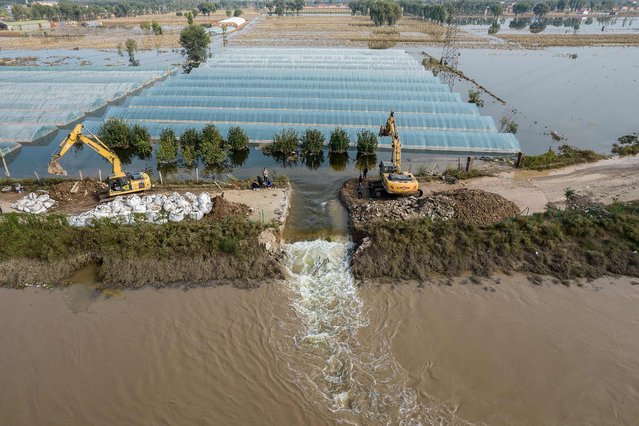 This aerial photo taken on October 11, 2021 shows rescuers digging a spillway with an excavator to release flood waters after heavy rainfall at a flooded area in Jiexiu in the city of Jinzhong in China's northern Shanxi province on October 11, 2021. (Photo by AFP Photo/China Stringer Network) 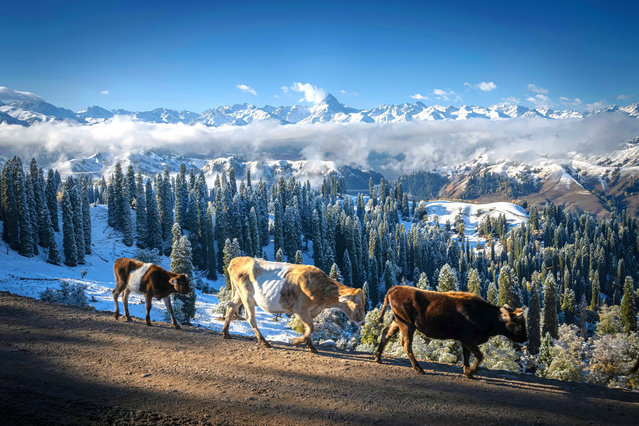 A snowfall on October 12, 2021 gave the Kurdening scenic spot in Gongliu County, Ili Kazakh Autonomous Prefecture, Xinjiang, the color of autumn and the whiteness of winter. The golden and snow-white reflect each other in the village, giving people a magnificent visual experience, especially the clouds and mists. Floating on the mountainside, the majesty of the mountain is more visible, and the spruce stands quietly at the foot of the mountain, which is more magnificent and majestic. (Photo by Sipa Asia/Rex Features/Shutterstock) 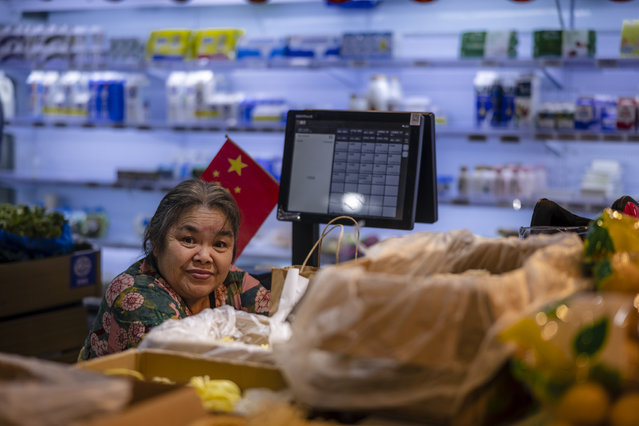 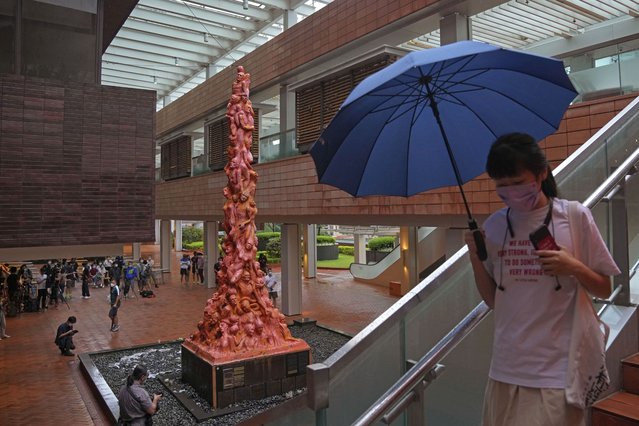 A woman walks in front of the “Pillar of Shame” statue, a memorial for those killed in the 1989 Tiananmen crackdown, at the University of Hong Kong, Wednesday, October 13, 2021. Danish artist Jens Galschioet is seeking to get back his sculpture in Hong Kong memorializing the victims of China's 1989 Tiananmen Square crackdown as a deadline loomed for its removal Wednesday. (Photo by Kin Cheung/AP Photo) 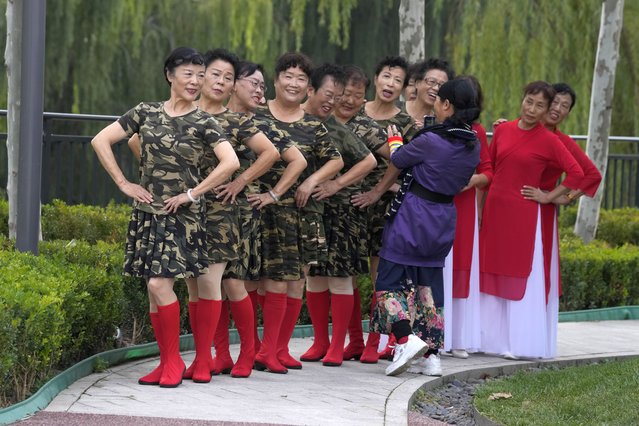 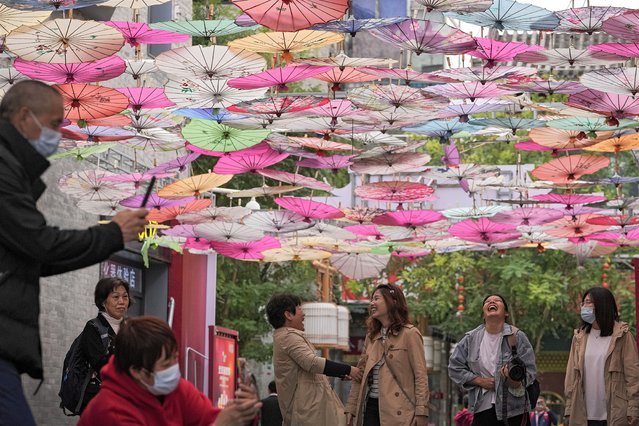 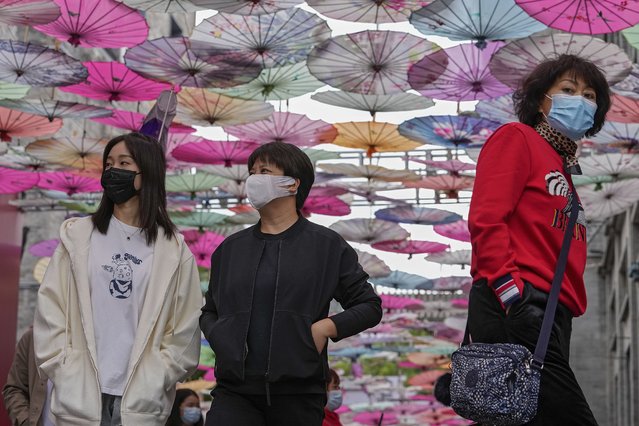 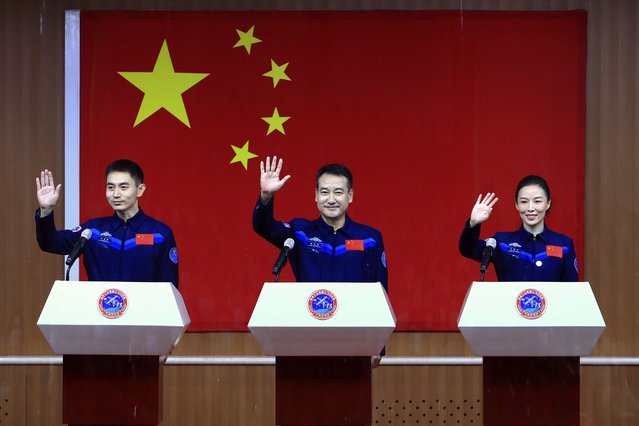 In this photo released by Xinhua News Agency, Chinese astronauts, from left, Ye Guangfu, Zhai Zhigang and Wang Yaping wave to reporters as they arrive for a press conference at the Jiuquan Satellite Launch Center ahead of the Shenzhou-13 launch mission from Jiuquan in northwestern China, Thursday, October 14, 2021. China is preparing to send three astronauts to live on its space station for six months – a new milestone for a program that has advanced rapidly in recent years. (Photo by Ju Zhenhua/Xinhua via AP Photo) 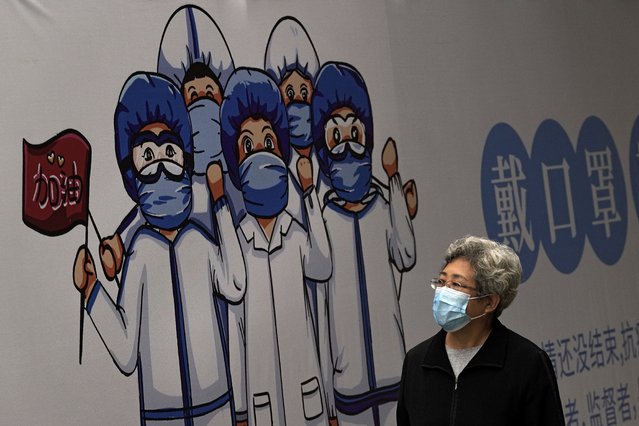 A woman wearing a face mask to help curb the spread of the coronavirus walks by a billboard depicting medical workers flight against the COVID-19 bearing the words “Wear Face Mask” on display along a hutong alley in Beijing, Thursday, October 14, 2021. (Photo by Andy Wong/AP Photo) 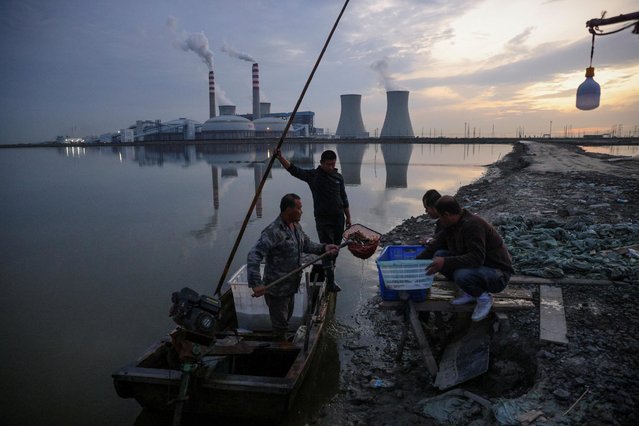 Fishermen bring in their catch from a lake in front of a power plant of the State Development and Investment Corporation (SDIC) outside Tianjin, China, October 14, 2021. (Photo by Thomas Peter/Reuters) 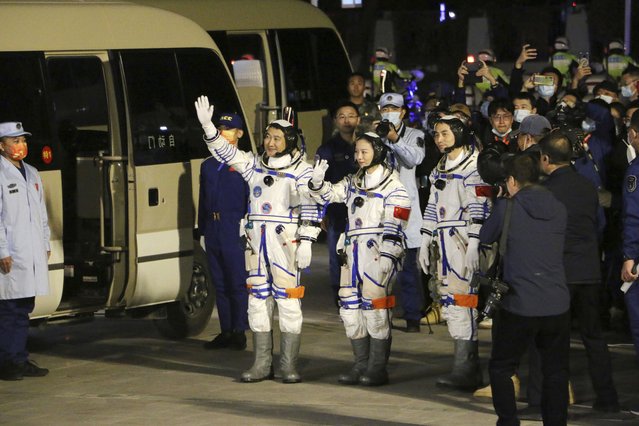 From left, Chinese astronauts Zhai Zhigang, Wang Yaping, and Ye Guangfu, wave before leaving for the Shenzhou-13 crewed space mission at the Jiuquan Satellite Launch Center in northwest China, October15, 2021. Shortly ahead of sending a new three-person crew to its space station, China on Friday renewed its commitment to international cooperation in the peaceful use of space. (Photo by Chinatopix via AP Photo) 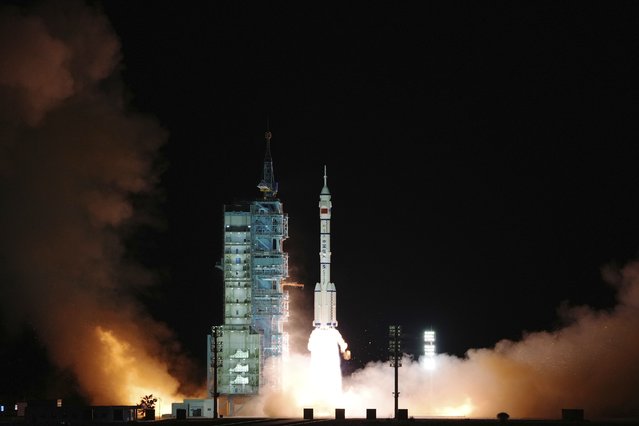 In this photo released by Xinhua News Agency, the crewed spaceship Shenzhou-13, atop a Long March-2F carrier rocket, is launched from the Jiuquan Satellite Launch Center in northwest China's Gobi Desert, October 16, 2021. (Photo by Li Gang/Xinhua via AP Photo) 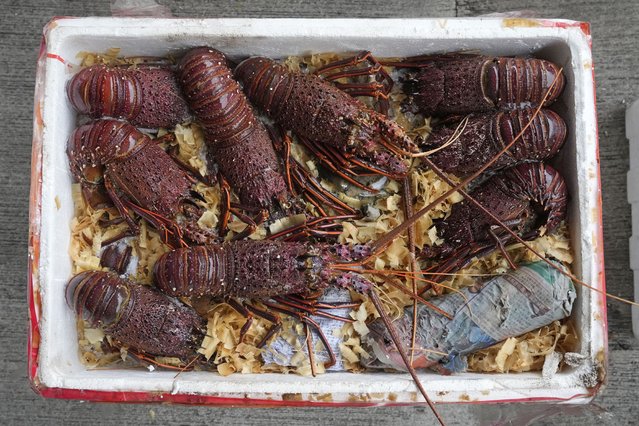 Australian lobsters seized by the Hong Kong Customs during an anti-smuggling operation, are displayed during a conference in Hong Kong, Friday, October 15, 2021. Hong Kong and mainland authorities have seized more than $540,000 worth of smuggled Australian lobsters believed to be bound for the mainland, after China restricted imports of the crustacean amid escalating tensions with Australia. (Photo by Kin Cheung/AP Photo)
Edit Del
20 Oct 2021 08:44:00, post received 0 comments
Publication archive:
←   →
Popular tags:
All tags
Last searches: