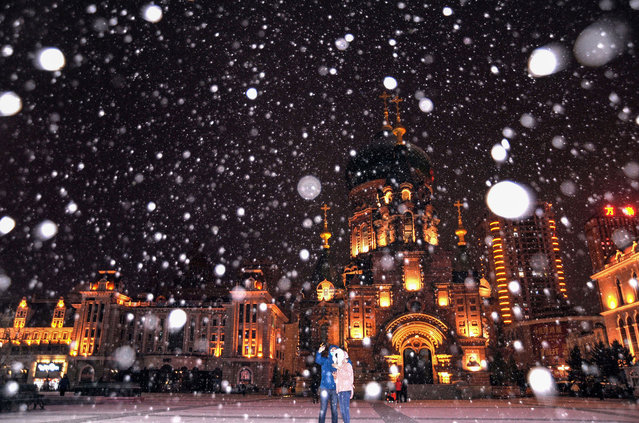 This photo taken on November 7, 2021 shows people taking photos in front of the Saint Sophia Cathedral during a snowfall in Harbin in China's northwastern Heilongjiang province. (Photo by AFP Photo/China Stringer Network) 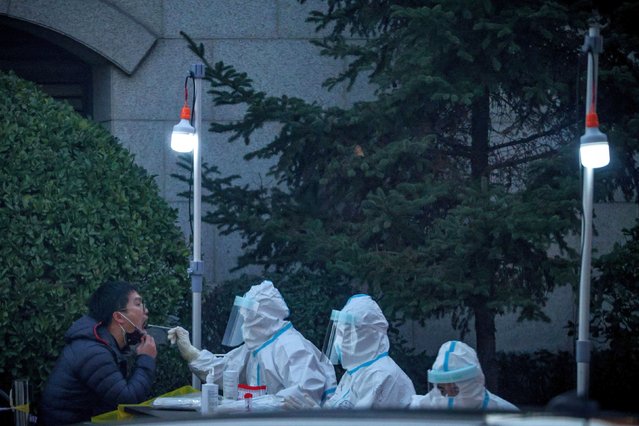 Medical personnel test a man at a makeshift testing site near a residential compound that was locked down after a local outbreak of the coronavirus disease (COVID-19) in Beijing, China, November 11, 2021. (Photo by Thomas Peter/Reuters) 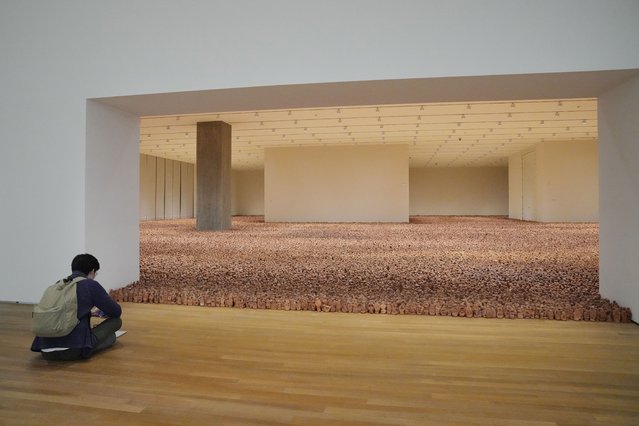 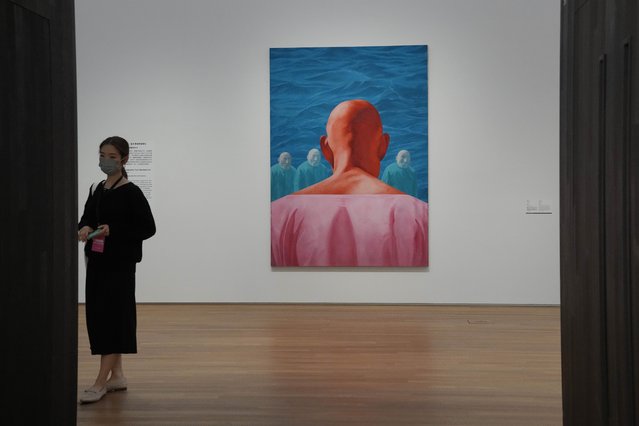 A woman walks past the artwork “1995.2” created by Chinese artist Fang Lijun during a media preview in the West Kowloon Cultural District of Hong Kong, Thursday, November 11, 2021. (Photo by Kin Cheung/AP Photo) 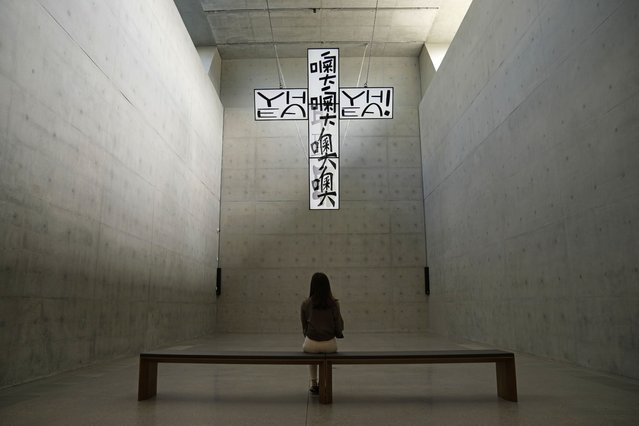 A woman looks at the artwork “Crucified TVs – Not a Prayer in Heaven” created by South Korea artist Chang Young-hae, inside the “M+” visual culture museum during a media preview in the West Kowloon Cultural District of Hong Kong, Thursday, November 11, 2021. (Photo by Kin Cheung/AP Photo) 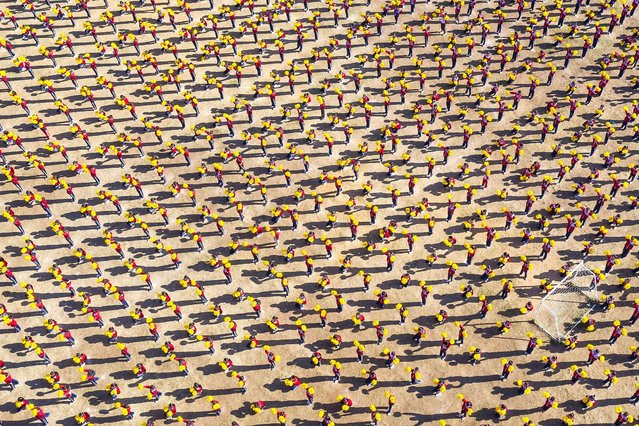 Aerial view of students performing cheerleading aerobics during the opening ceremony of a primary school's sports meeting at Xingan County on November 10, 2021 in Ji'an, Jiangxi Province of China. (Photo by Li Fusun/VCG via Getty Images) 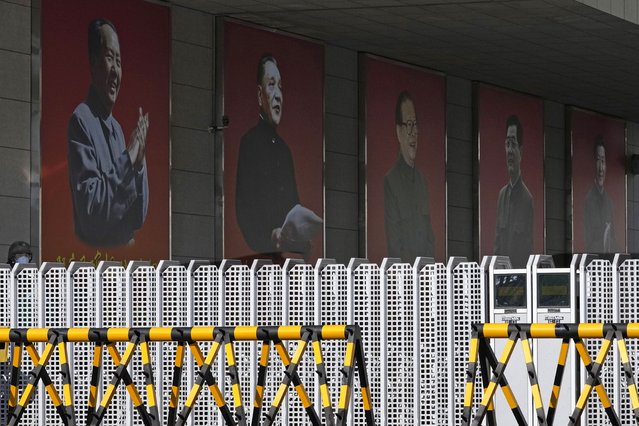 Portraits of China's former top leaders from left Mao Zedong, Deng Xiaoping, Jiang Zemin, Hu Jintao and including the current President Xi Jinping are seen at a military camp in Beijing, China, Thursday, November 11, 2021. China's leaders have approved a resolution on the history of the ruling Communist Party that was expected to set the stage for President Xi Jinping to extend his rule next year during a four-day meeting of its Central Committee that ended Thursday. (Photo by Ng Han Guan/AP Photo) 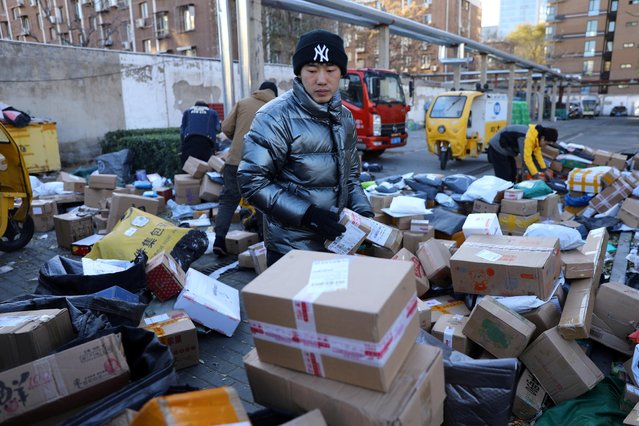 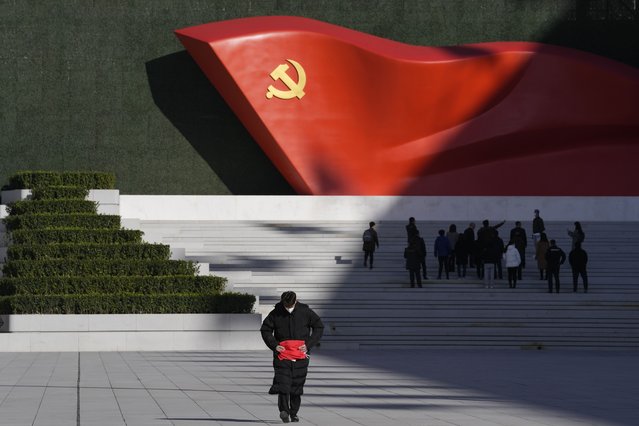 A worker folds a flag near a sculpture of the Chinese Communist Party flag outside the Museum of the Communist Party of China here in Beijing, China, Friday, November 12, 2021. Chinese leader Xi Jinping emerges from a party conclave this week not only more firmly ensconced in power than ever, but also with a stronger ideological and theoretical grasp on the ruling Communist Party's past, present and future. (Photo by Ng Han Guan/AP Photo) 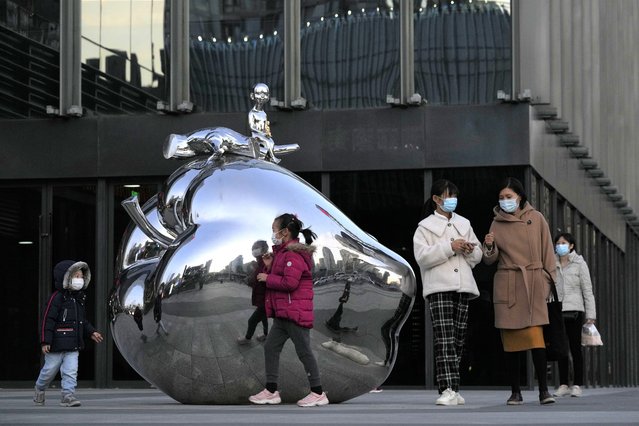 Residents wearing masks past by an art work outside a mall in Beijing, China, on November 13, 2021. Quarantines, obligatory testing and travel restrictions have become a way of life for much of the population. The country's vaccination rate is among the world's highest and authorities are beginning to administer booster shots as winter descends. (Photo by Ng Han Guan/AP Photo) 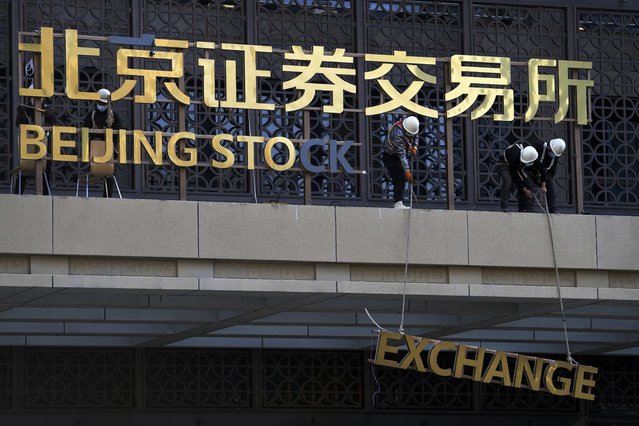 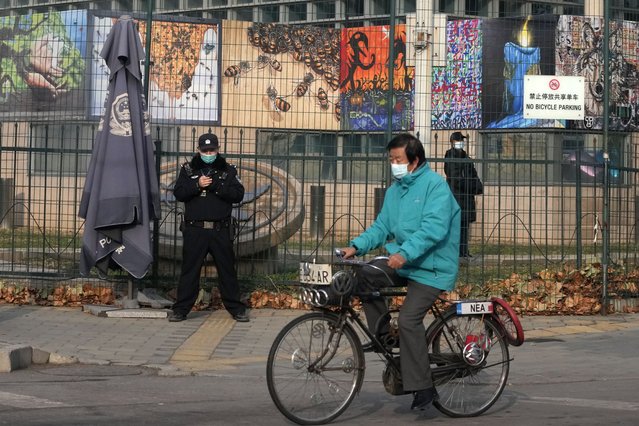 A resident on bicycle past by security personnel outside the U.S. Embassy in Beijing, China on November 16, 2021. China and the U.S. have agreed to ease restrictions on each other's media workers amid a slight easing of tensions between the two sides. (Photo by Ng Han Guan/AP Photo) 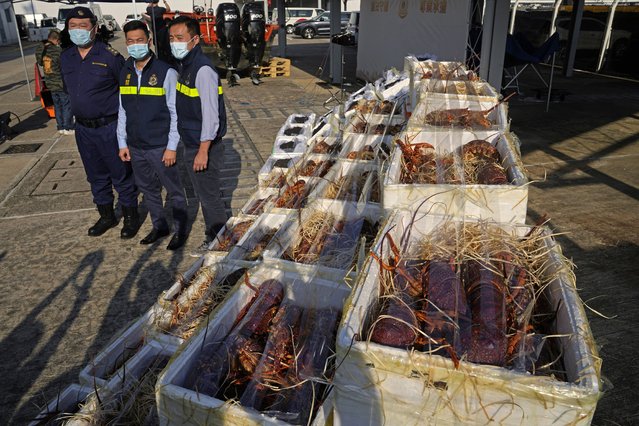 Hong Kong Customs officials pose beside lobsters seized by the Hong Kong Customs during an anti-smuggling operation are displayed at a news conference in Hong Kong, Tuesday, November 16, 2021. Hong Kong authorities said Tuesday that it had seized about 2000 pounds each of live lobsters and sea cucumbers valued around US$ 1.28 million, believed to be bound for mainland China, months after Beijing restricted imports of lobsters from Australia amid escalating tensions between the two countries. (Photo by Kin Cheung/AP Photo) 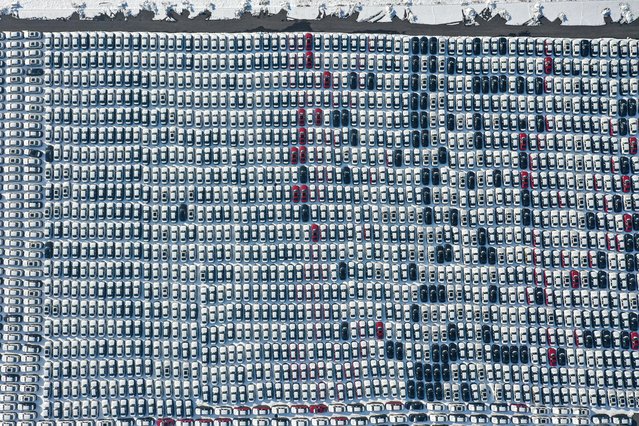 An aerial view of vehicles covered by snow at Tiexi Plant of BMW Brilliance Automotive on November 16, 2021 in Shenyang, Liaoning Province of China. (Photo by VCG/VCG via Getty Images) 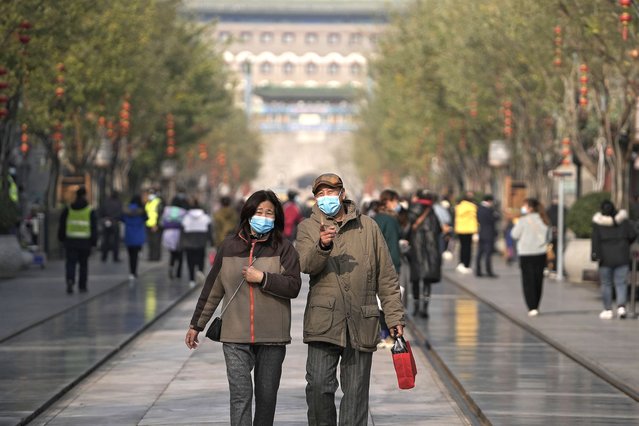 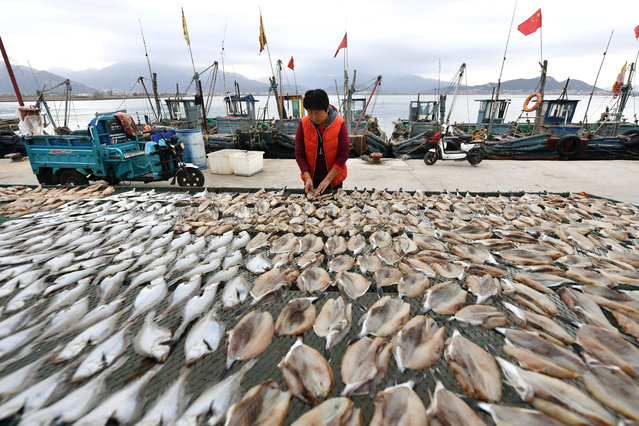 During the autumn and winter seasons, on November 17, 2021, fishermen in Laoshan District, Qingdao City, Shandong Province will pickle and dry some marine fish into dried fish with local characteristics to increase their income. (Photo by Sipa Asia/Rex Features/Shutterstock) 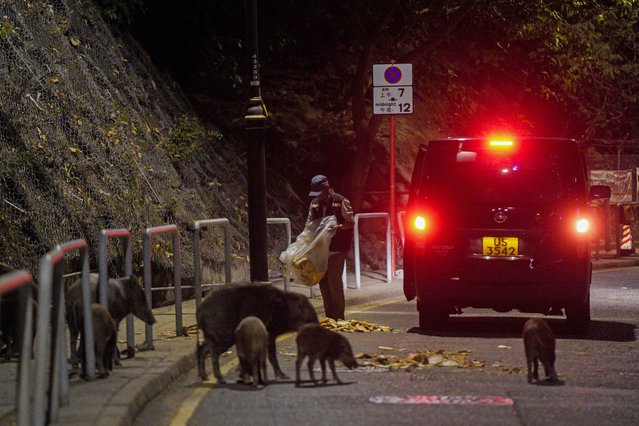 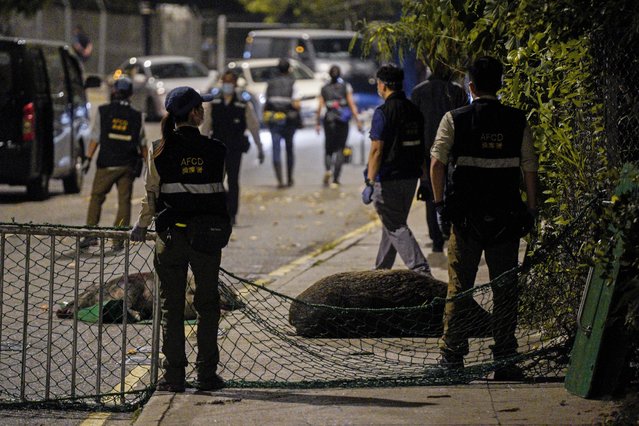 Wild boars are tranquilized with dart guns, laid on the ground after being shot by officers from the Agriculture, Fisheries and Conservation Department in Hong Kong, Wednesday, November 17, 2021. (Photo by Lam Chun Tung/The Initium Media via AP Photo) 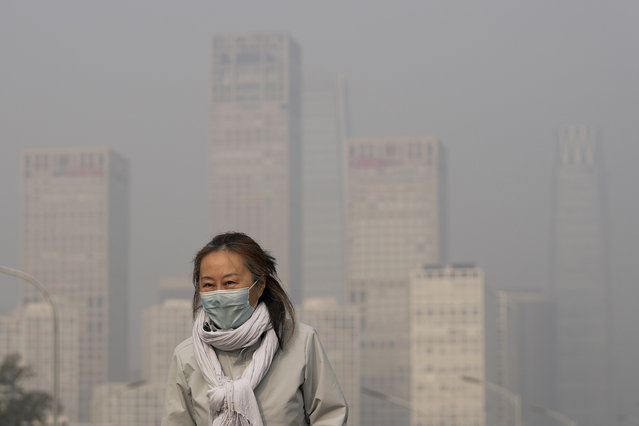 A woman wearing a face mask to protect from COVID-19 walks against the office buildings in Central Business District shrouded by pollution haze in Beijing, Thursday, November 18, 2021. (Photo by Andy Wong/AP Photo) 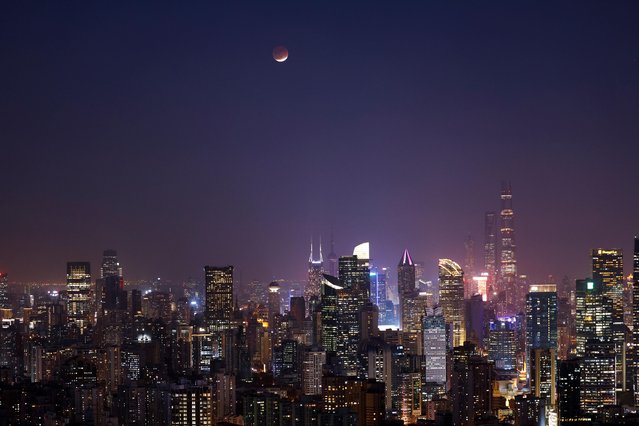