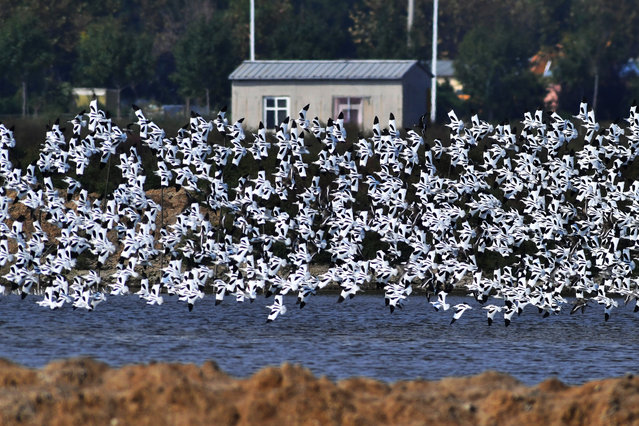 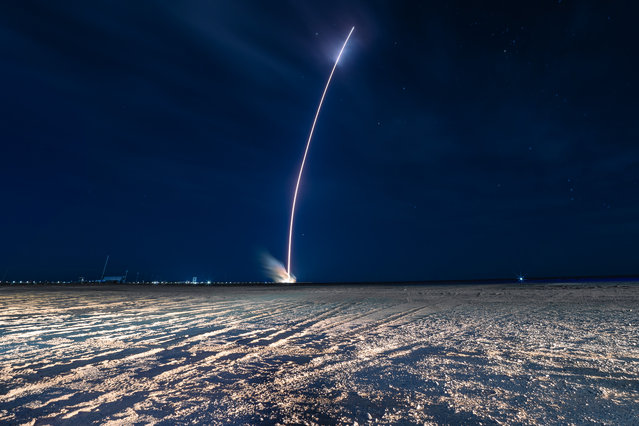 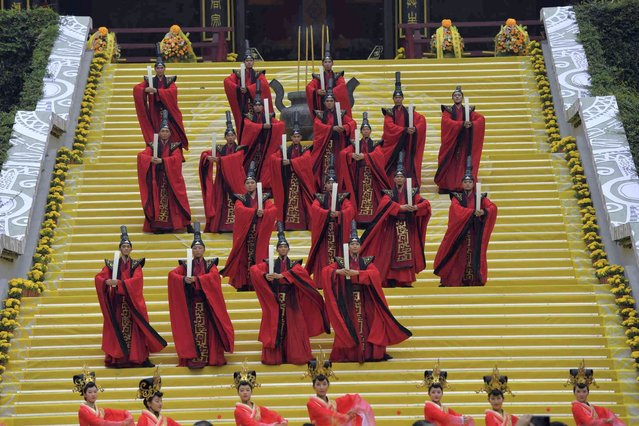 Dancers perform a ritual dance during a ceremony honoring the mythological ancestor Huangdi, also known as the Yellow Emperor, in Jinyun county in eastern China's Zhejiang province Thursday, October 14, 2021. Huangdi was believed to have ruled China around 5000 years ago and rituals for honoring and worshipping Huangdi dates back some 1600 years, according the local Zhejiang media. (Photo by Chinatopix via AP Photo) 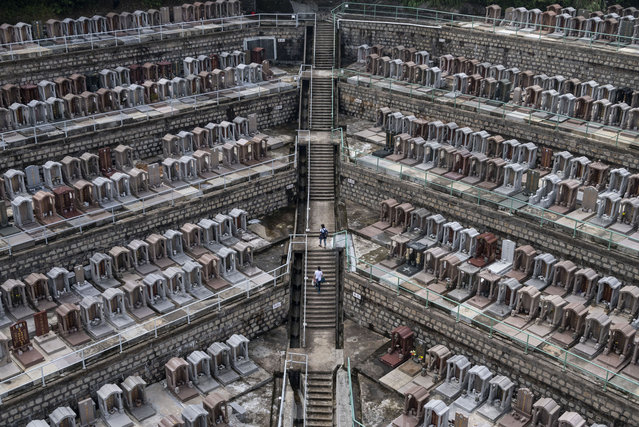 People visit the Chai Wan cemetery during the annual Chung Yeung Festival to pay respect to the departed relatives, clean the gravesites, and leave offerings in remembrance in Hong Kong, China, on October 14, 2021. (Photo by Miguel Candela/Anadolu Agency via Getty Images) 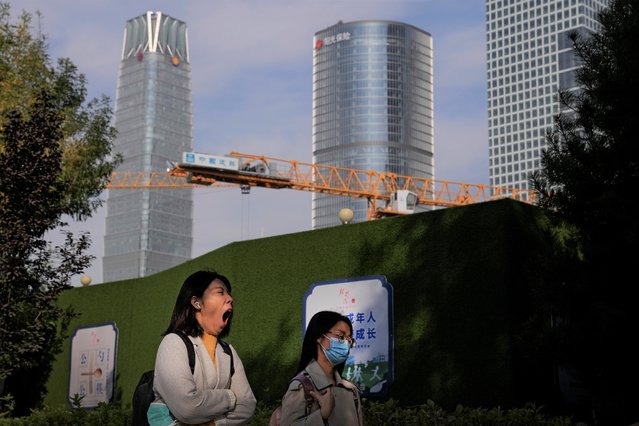 A woman holding a face mask yawns while passing by a construction crane at the Central Business District in Beijing, Monday, October 18, 2021. China's economic growth sank in the latest quarter as a slowdown in construction and curbs on energy use weighed on its recovery from the coronavirus pandemic. (Photo by Andy Wong/AP Photo) 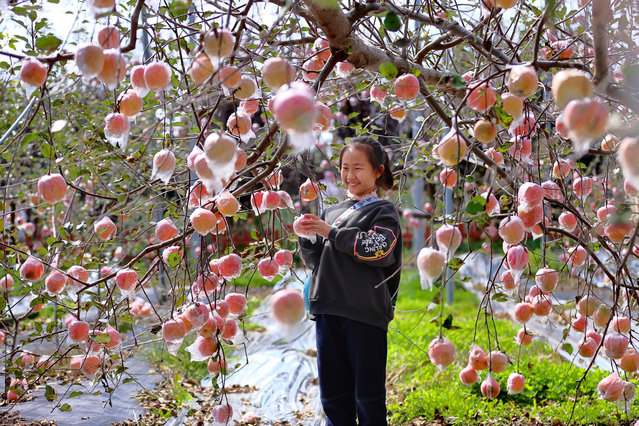 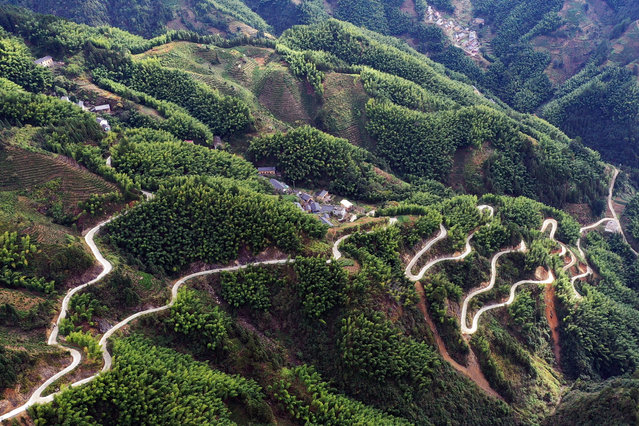 On October 17, 2021, the Panshan Highway in Zhoujiayuan Village, Huangjian Township, Xiuning County, Huangshan City, Huangshan City, Anhui Province, was photographed by drone aerial photography. The villages set against each other and are magnificent. Zhoujiayuan Village is located on a mountain at an altitude of 800 meters. In 2020, Huangjian Township raised 2.1 million yuan to widen the road to the village in accordance with the standards of the township road. The local abundance of bamboo shoots, tea, Wakaba and other agricultural products are continuously transported out of the mountain. The good ecological environment and well-preserved ancient villages have also promoted the rapid development of tourism in mountain villages, becoming rich roads and happy roads for mountain villages to develop production and revitalize the economy. (Photo by Sipa Asia/Rex Features/Shutterstock) 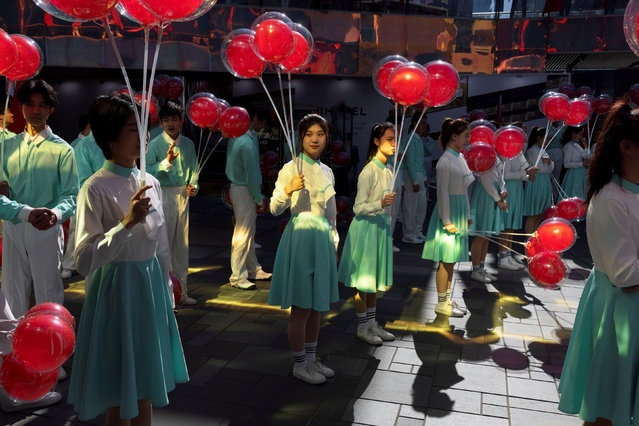 Performers carry red balloons during the filming of a Chinese Communist Party propaganda video in an upscale shopping district in the Sanlitun area in Beijing, China, October 19, 2021. (Photo by Thomas Peter/Reuters) 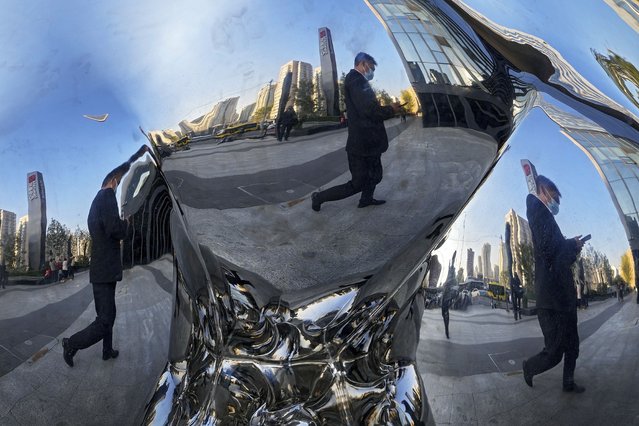 A man wearing a face mask to help curb the spread of the coronavirus is reflected on an art installation on display outside a shopping mall in Beijing, Sunday, October 17, 2021. (Photo by Andy Wong/AP Photo) 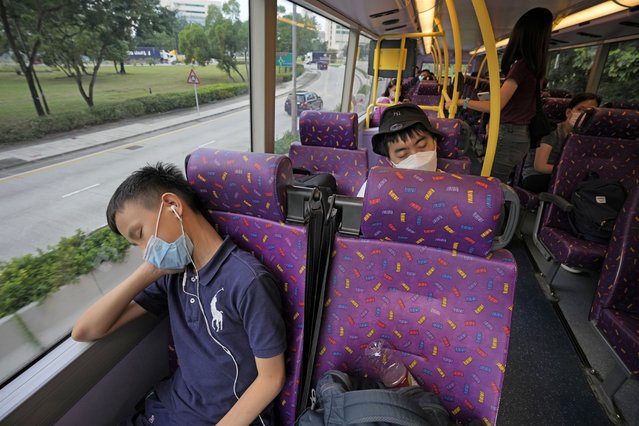 Passengers sleep on the upper deck of a double-decker bus in Hong Kong, Saturday, October 16, 2021. Travel-starved, sleep-deprived residents might find a new Hong Kong bus tour to be a snooze. The 47-mile, five-hour ride on a double-decker bus around the territory is meant to appeal to people who are easily lulled asleep by long rides. (Photo by Kin Cheung/AP Photo) 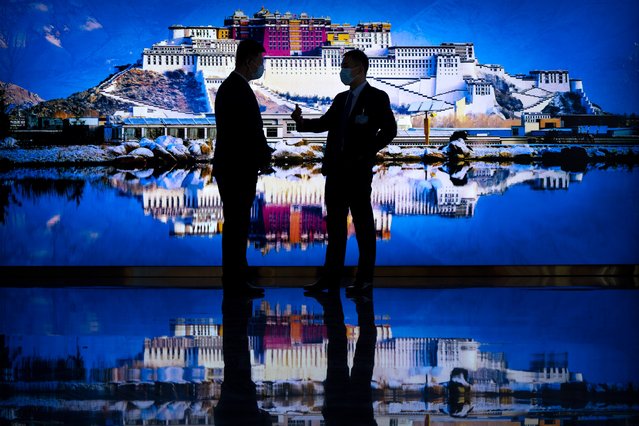 Attendees stand in front of a photo mural of the Potala Palace as they talk before a promotional event for Tibet at the Ministry of Foreign Affairs in Beijing, Wednesday, October 20, 2021. (Photo by Mark Schiefelbein/AP Photo) 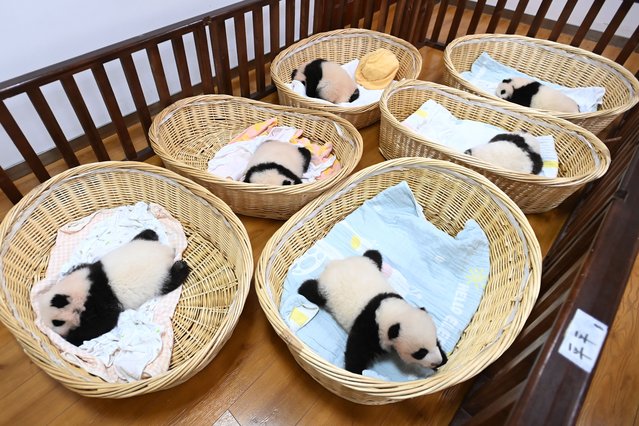 Six giant panda cubs born in 2021 are seen at the Shenshuping Base of China Conservation and Research Center for Giant Panda on October 20, 2021 in Aba Tibetan and Qiang Autonomous Prefecture, Sichuan Province of China. (Photo by An Yuan/China News Service via Getty Images) 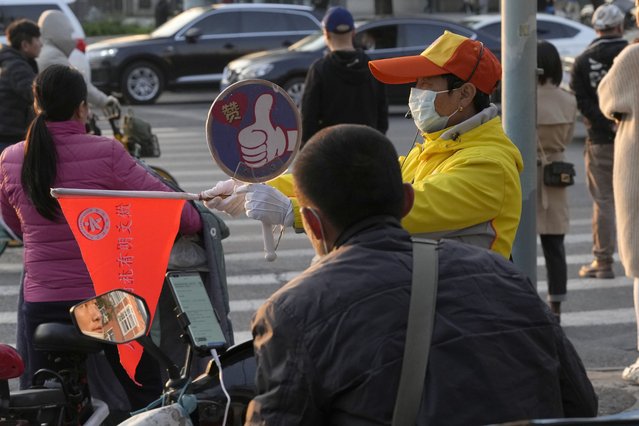 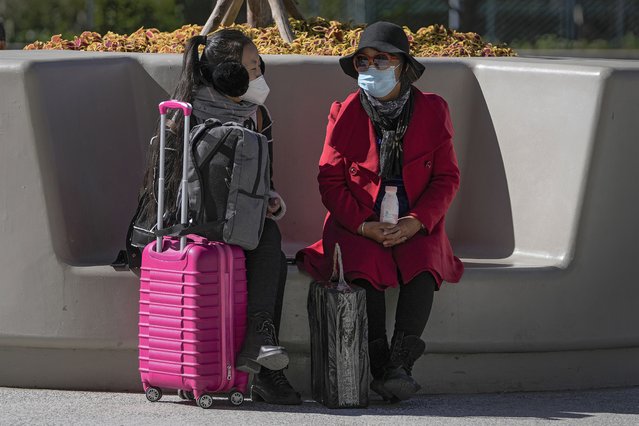 Women wearing face masks to help curb the spread of the coronavirus chat each other on a bench outside a shopping mall in Beijing, Thursday, October 21, 2021. (Photo by Andy Wong/AP Photo) 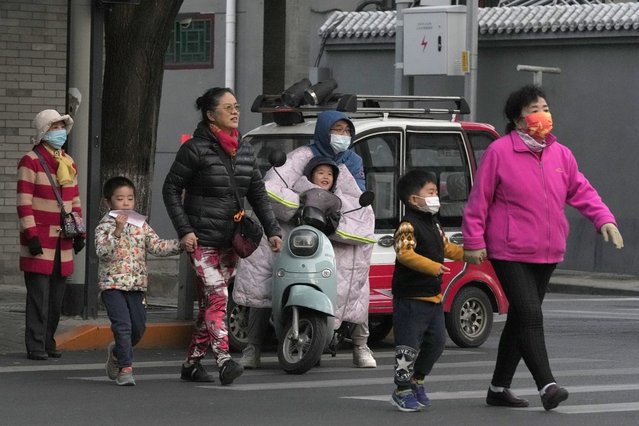 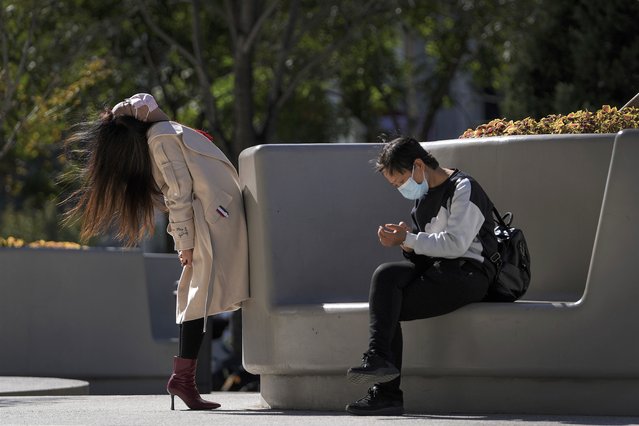 A woman wearing a face mask to help curb the spread of the coronavirus stretches her body next to a masked woman sitting on a bench outside a shopping mall in Beijing, Thursday, October 21, 2021. (Photo by Andy Wong/AP Photo) 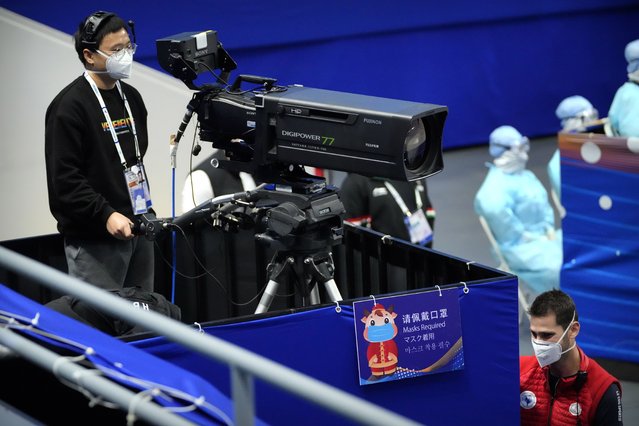 A cameraman wearing a face mask to protect against COVID-19 films near a sign reminding attendees to wear masks at the ISU World Cup Short Track speed skating competition, a test event for the 2022 Winter Olympics, at the Capital Indoor Stadium in Beijing, Friday, October 22, 2021. (Photo by Mark Schiefelbein/AP Photo) 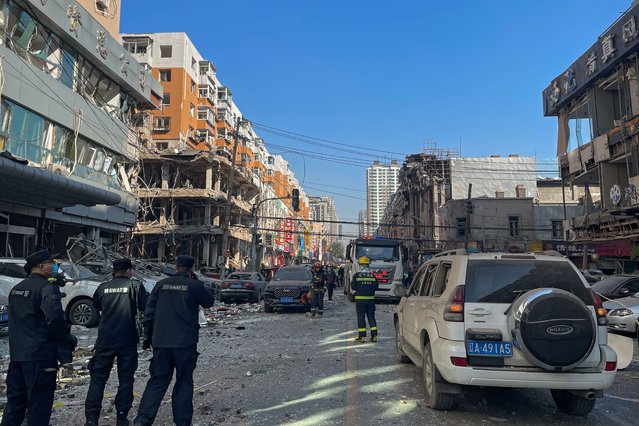 In this photo released by Xinhua News Agency, policemen and firefighters walk through damaged shophouses following an explosion in Shenyang in northeastern China's Liaoning Province, Thursday, October 21, 2021. Several people were killed and over dozen injured in a gas explosion at a restaurant in northeastern Chinese city Shenyang Thursday morning, according to local authorities. (Photo by Cai Xiangxin/Xinhua via AP Photo) 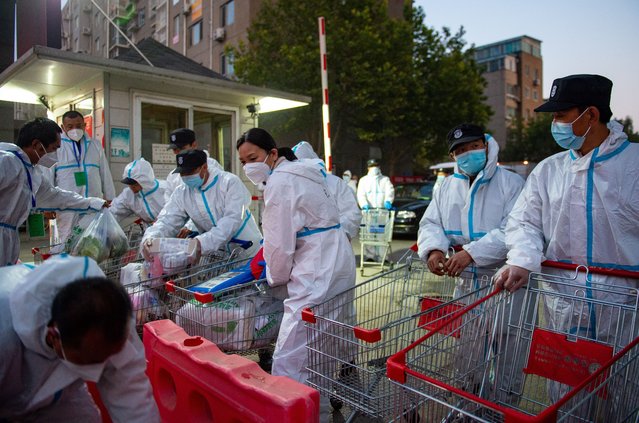 Epidemic prevention and control staff members arrange daily necessities for residents at the Hongfuyuan residential community in Changping District of Beijing, capital of China, October 23, 2021. The Hongfuyuan residential community was listed as high risk of COVID-19 on Saturday and has been put under closed-off management. (Photo by Xinhua News Agency/Rex Features/Shutterstock) 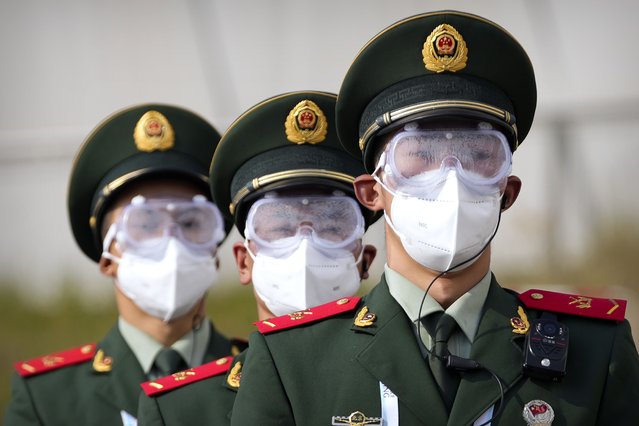 Chinese paramilitary police wearing goggles and face masks march in formation at the Yanqing National Sliding Center during an IBSF sanctioned race, a test event for the 2022 Winter Olympics, in Beijing, Monday, October 25, 2021. A northwestern Chinese province heavily dependent on tourism closed all tourist sites Monday after finding new COVID-19 cases. The spread of the delta variant by travelers and tour groups is of particular concern ahead of the Winter Olympics in Beijing in February. Overseas spectators already are banned, and participants will have to stay in a bubble separating them from people outside. (Photo by Mark Schiefelbein/AP Photo)
Edit Del
26 Oct 2021 08:47:00, post received 0 comments
Publication archive:
←   →
Popular tags:
All tags
Last searches: