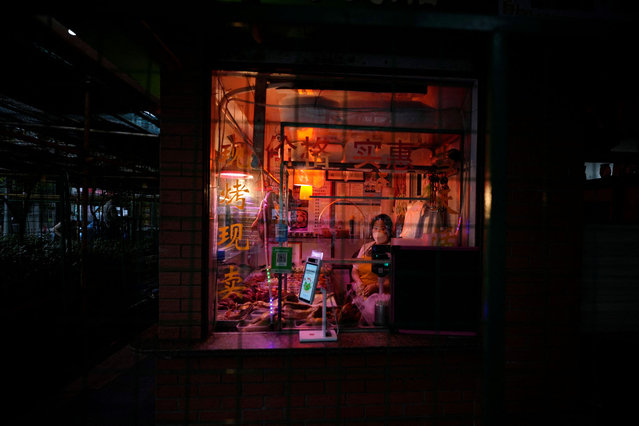 A staff member wearing a face mask works at a food store behind makeshift fences, after the lockdown placed to curb the coronavirus disease (COVID-19) outbreak was lifted in Shanghai, China on June 2, 2022. (Photo by Aly Song/Reuters) 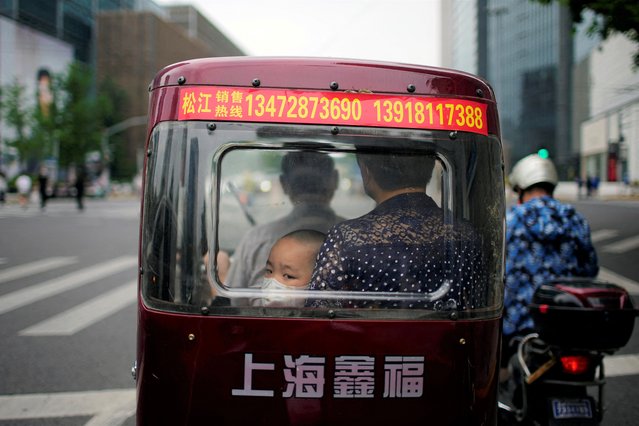 A child wearing a face mask sits inside a tricycle on a road, after the lockdown placed to curb the coronavirus disease (COVID-19) outbreak was lifted in Shanghai, China on June 1, 2022. (Photo by Aly Song/Reuters) 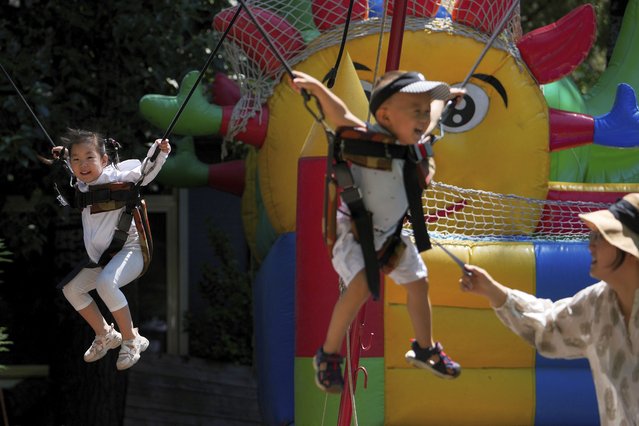 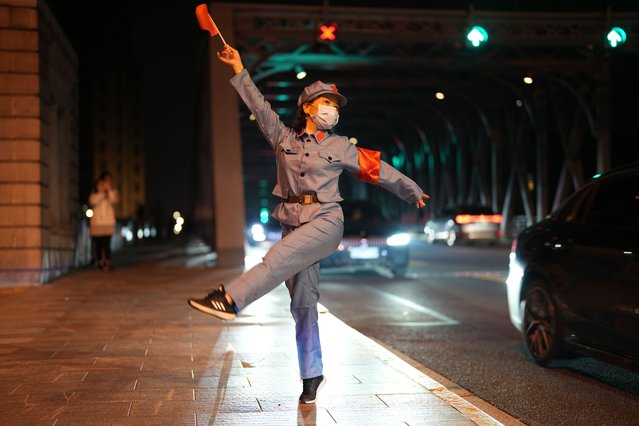 A woman wearing a Red Army uniform dances at the Bund at midnight on June 1, 2022 in Shanghai, China. Shanghai will fully restore the normal order of production and living starting from Wednesday. (Photo by Zheng Xianzhang/VCG via Getty Images) 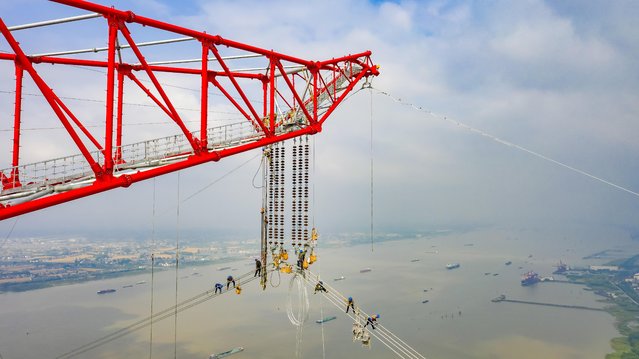 Workers install electric wires on the 385-meter-high world's tallest transmission tower by the side of Yangtze River during construction of a 500-kilovolt ultra-high voltage (UHV) power line on June 1, 2022 in Taizhou, Jiangsu Province of China. (Photo by Shi Jun/VCG via Getty Images) 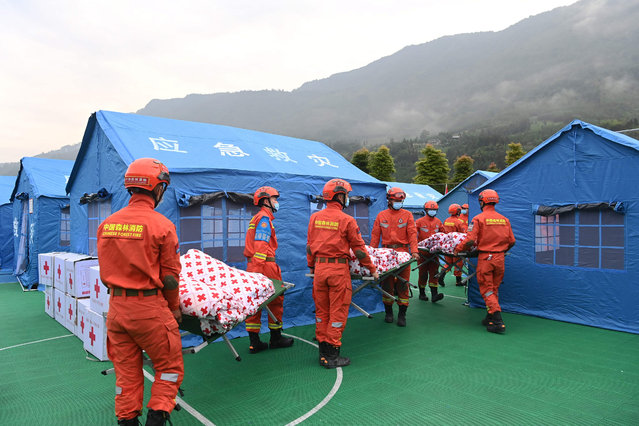 Rescue workers transfer supplies near tents set up for people displaced after a 6.1 magnitude earthquake in Yaan, in China's southwestern Sichuan province on June 2, 2022. (Photo by AFP Photo/China Stringer Network) 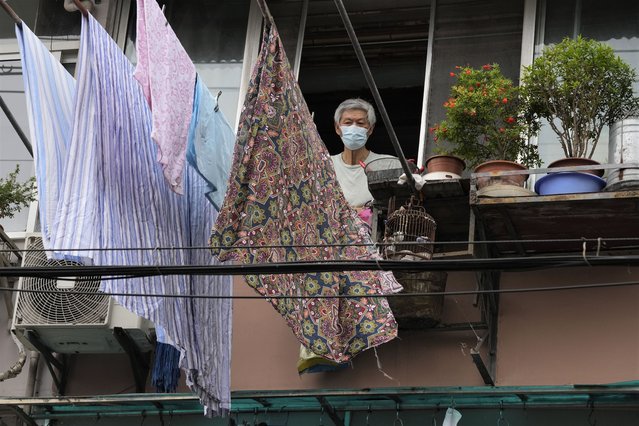 A resident wearing a mask looks out from his home Thursday, June 2, 2022, in Shanghai. Traffic, pedestrians and joggers reappeared on the streets of Shanghai on Wednesday as China's largest city began returning to normalcy amid the easing of a strict two-month COVID-19 lockdown that has drawn unusual protests over its heavy-handed implementation. (Photo by Ng Han Guan/AP Photo) 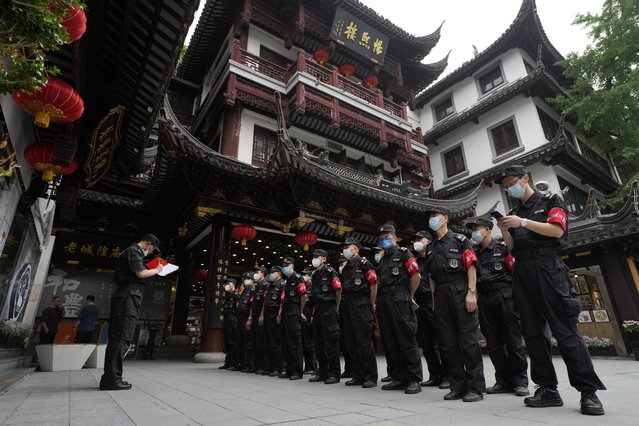 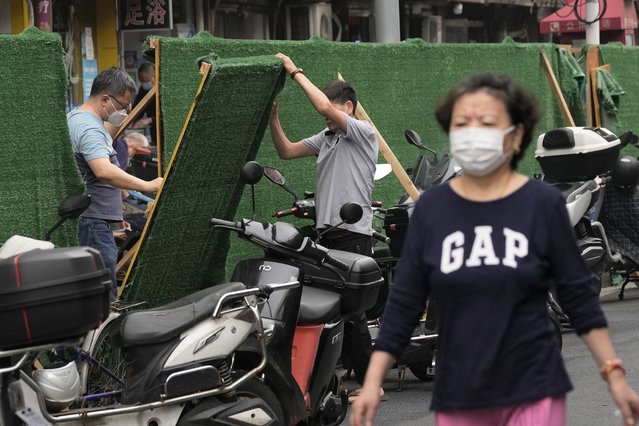 Two men remove a section of the barrier around a community, Thursday, June 2, 2022, in Shanghai. (Photo by Ng Han Guan/AP Photo) 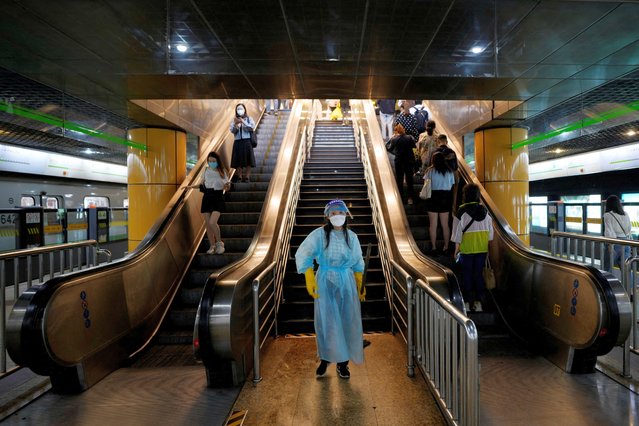 A worker in a protective suit cleans the floor at a subway station, after the lockdown placed to curb the coronavirus disease (COVID-19) outbreak was lifted in Shanghai, China on June 2, 2022. (Photo by Aly Song/Reuters) 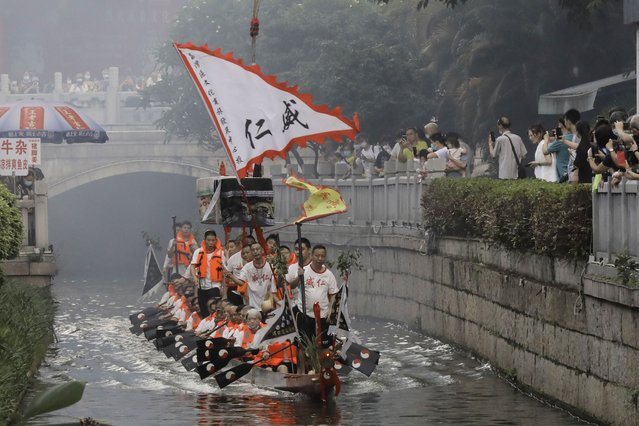 Dragon boat participants from Panting village row along a canal in the historic Lychee Bay scenic area in Guangzhou in southern China's Guangdong Province, Friday, June 3, 2022. Dragon boat races returned in parts of China on Friday for the first time since the outbreak of the pandemic in late 2019, as restrictions are lifted along with a major drop in COVID-19 cases. The historic Lychee Bay scenic area in the southern Chinese manufacturing hub of Guangzhou staged races and other scaled-back celebrations to mark the holiday that commemorates the death more than 2,200 years ago of revered poet and government minister Qu Yuan. (Photo by Caroline Chen/AP Photo) 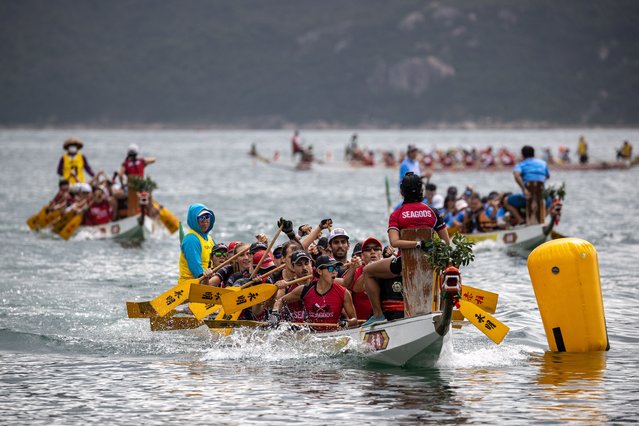 Competitors take part in Dragon Boat races in Hong Kong, China, 03 June 2022. The Dragon Boat Festival, also known as Tuen Ng Festival in Cantonese, is a festival with the traditional central themes of warding off evil spirits and keeping diseases away. (Photo by Jerome Favre/EPA/EFE) 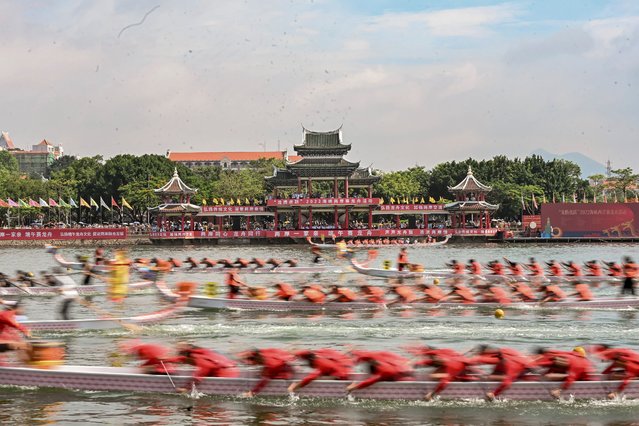 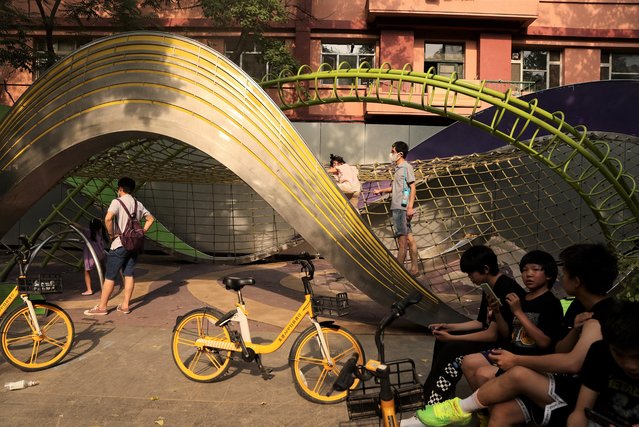 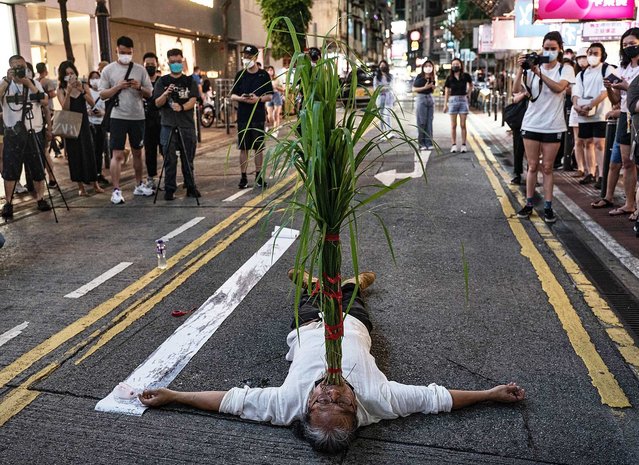 An artist demonstrates a performance arts on a street ahead of the 33rd anniversary of Tiananmen Square incident on June 03, 2022 in Hong Kong, China. The government announced to seal off the main parts of Victoria Park, where people gathered for the annual June 4 vigil. Police also have warned the public not to test their determination to enforce the law on June 4, adding that even going alone could end in an arrest for unlawful assembly, if someone is deemed to be there with a common purpose to express certain views. (Photo by Anthony Kwan/Getty Images) 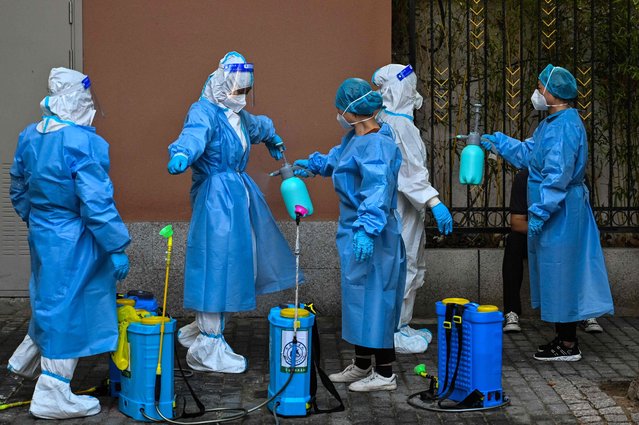 Workers spray disinfectant over colleagues in front of a residential area under a Covid-19 lockdown in the Huangpu district of Shanghai on June 4, 2022. (Photo by Hector Retamal/AFP Photo) 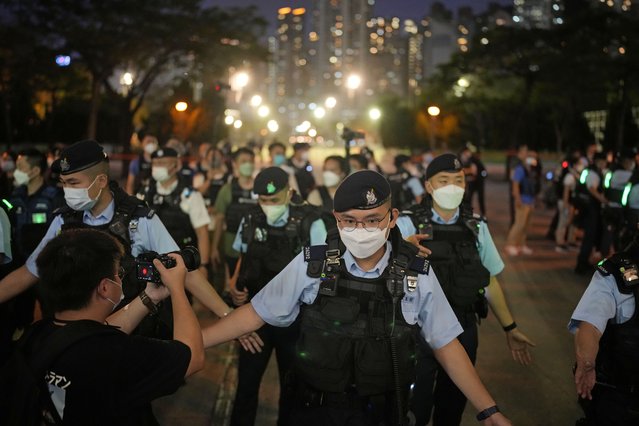 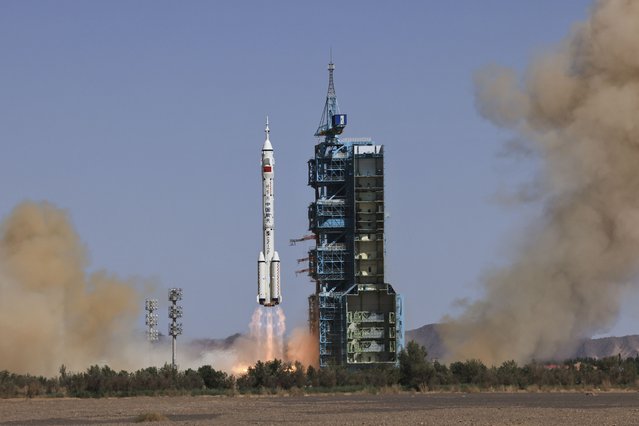 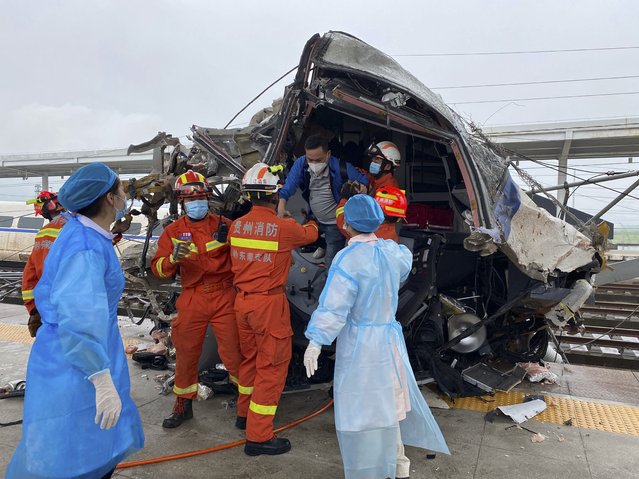 In this photo released by China's Xinhua News Agency, emergency personnel help a passenger off a damaged train car after it derailed in Rongjiang County in southwestern China's Guizhou Province, Saturday, June 4, 2022. The driver of a high-speed train in southern China was killed and several people were injured when two cars derailed early Saturday after hitting a mudslide, state broadcaster CCTV reported. (Photo by Xinhua via AP Photo) 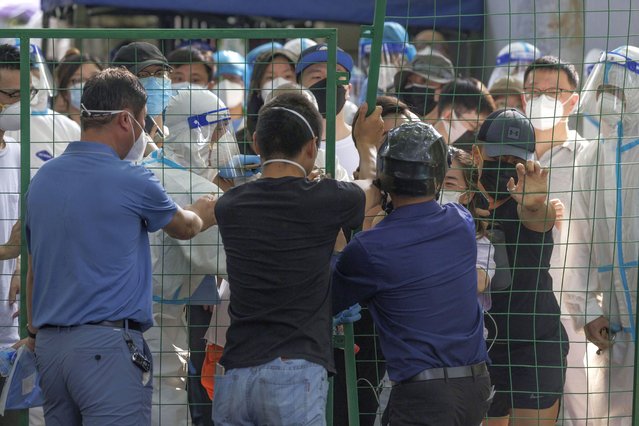 People try to break out of quarantine fence during the protest, amid new round of COVID-19 lockdowns, in Shanghai, China, 06 June 2022. Since 01 June, Shanghai lockdown was lifted as the city is still battling new sporadic community COVID-19 cases. Mandatory emergency PCR testing have been administrated in all medium and high-risk neighboring compounds. People in high and medium risk areas must have daily PCR testing for two weeks. If all residents remain negative for COVID-19, they will be marked as low risk area. (Photo by Alex Plavevski/EPA/EFE)
Edit Del
13 Jun 2022 04:22:00, post received 0 comments
Publication archive:
←   →
Popular tags:
All tags
Last searches: