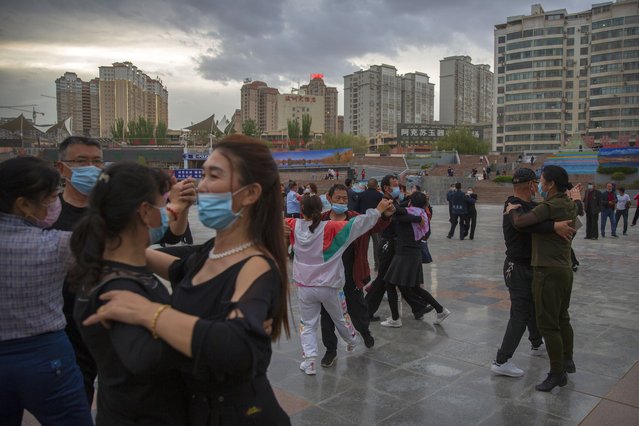 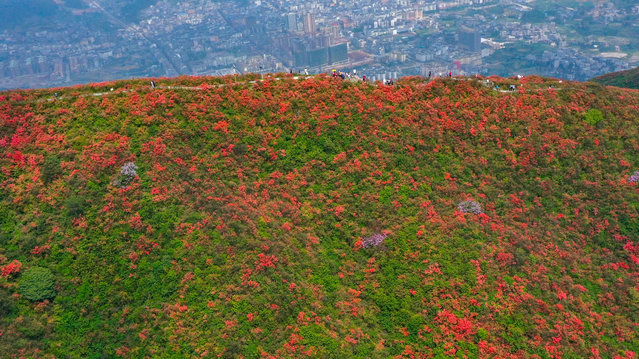 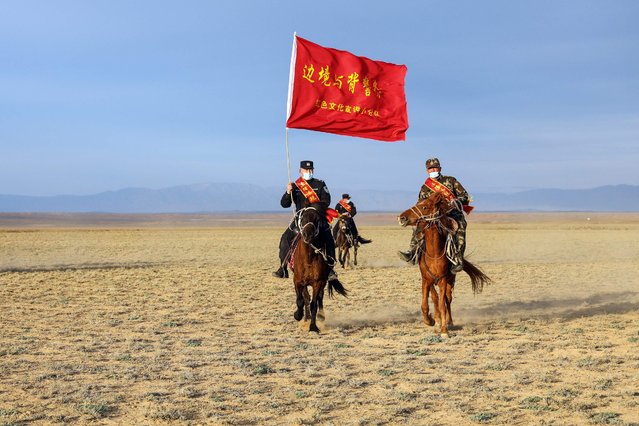 This photo taken on April 22, 2021 shows police officers and a staff member riding horses as they prepare to publicise laws and government policy to nomad herders in a remote area in Altay in China's northwestern Xinjiang region. (Photo by AFP Photo/China Stringer Network) 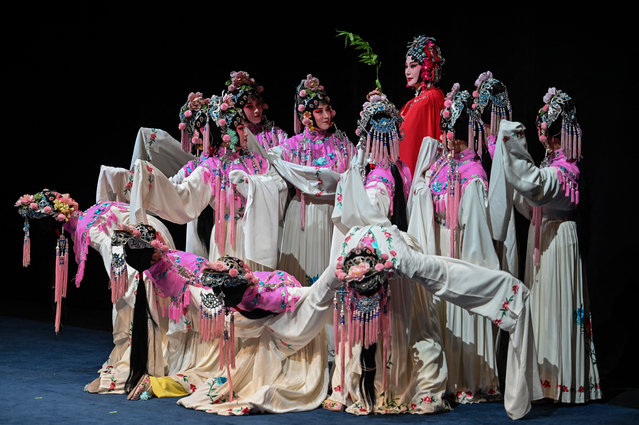 Actresses on stage during the performance of “The Peony Pavilion”, also called “The Return of Soul” play at the Shanghai Grand Theater, in Shanghai on April 25, 2021. The Peony Pavilion is a romantic tragicomedy play written by dramatist Tang Xianzu in 1598 and will be performed by the Jiangsu Performing Arts Group's Kunqu Opera Company, for two performances. (Photo by Hector Retamal/AFP Photo) 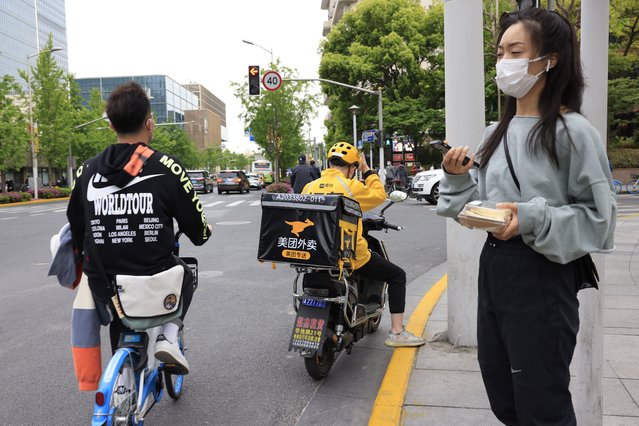 A Meituan delivery man in yellow goes on his rounds in Shanghai on Wednesday, April 21, 2021. China's market regulator on Monday, April 26, 2021 said it launched an investigation into suspected monopolistic behavior by food delivery firm Meituan, months after it investigated e-commerce company Alibaba as Beijing steps up scrutiny of anti-competitive behavior in the internet sector. (Photo by Ng Han Guan/AP Photo) 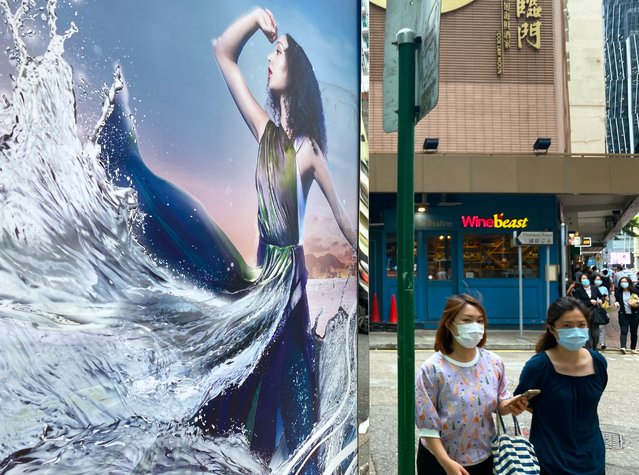 People wearing face masks to help protect against the spread of the coronavirus walk next to a poster at a street in Hong Kong, Monday, April 26, 2021. Hong Kong and Singapore on Monday said they would re-launch an air travel bubble on May 26, months after an initial arrangement that would allow tourists to fly between both cities without having to serve quarantine was postponed. (Photo by Vincent Yu/AP Photo) 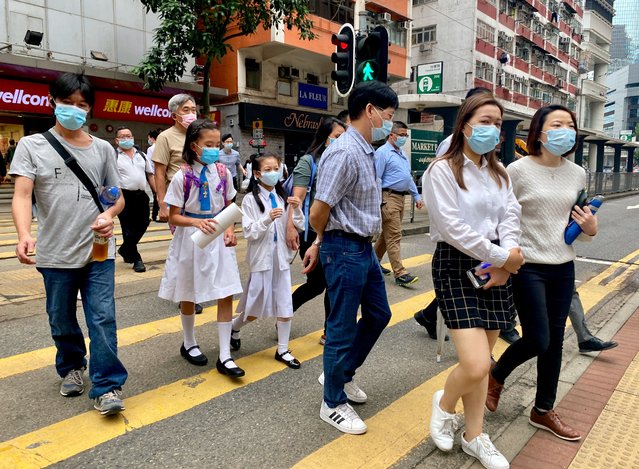 People wearing face masks to help protect against the spread of the coronavirus walk at a street in Hong Kong, Monday, April 26, 2021. (Photo by Vincent Yu/AP Photo) 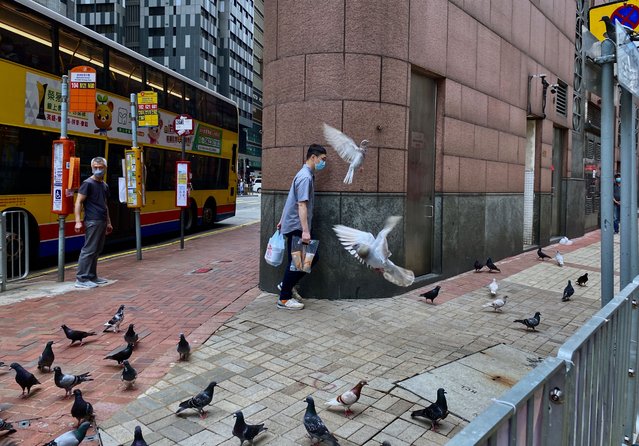 A man wearing face mask to help protect against the spread of the coronavirus walks past some flying pigeon at a street in Hong Kong, Monday, April 26, 2021. (Photo by Vincent Yu/AP Photo) 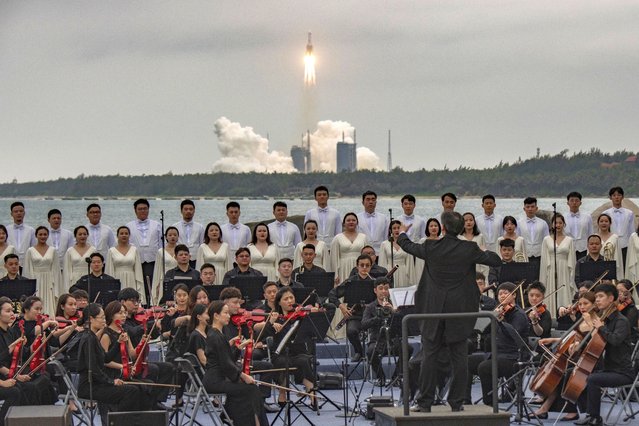 Members of the Xian Symphony Orchestra and Chorus perform during the launch of the Long March 5B rocket (back) carrying China's Tianhe space station core module from the Wenchang Spacecraft Launch Site in Hainan Province, China, 29 April 2021. China launched into space the core module of its space station, marking the beginning of a series of launch missions to complete the space station by the end of next year. (Photo by Matjaz Tancic/EPA/EFE) 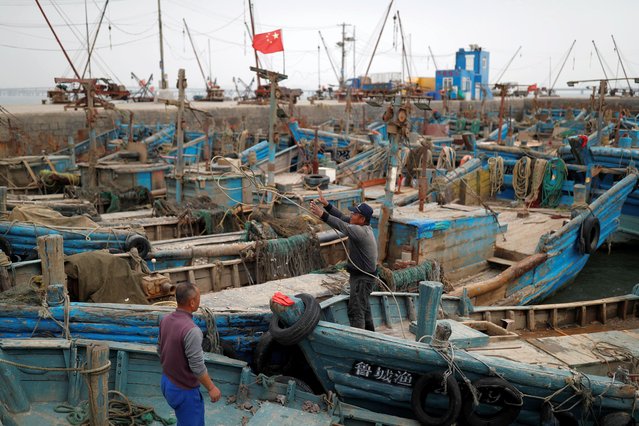 Fishermen stand on boats at a wharf on the coast of Qingdao, Shandong province, China, following an oil spill in the Yellow Sea caused by a collision between tanker A Symphony and bulk vessel Sea Justice off Qingdao port, April 28, 2021. (Photo by Carlos Garcia Rawlins/Reuters) 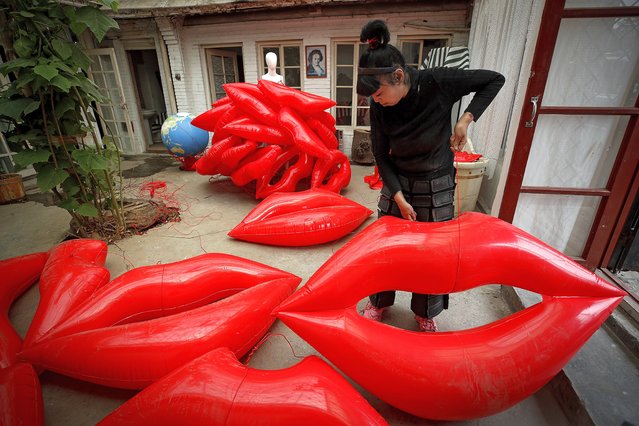 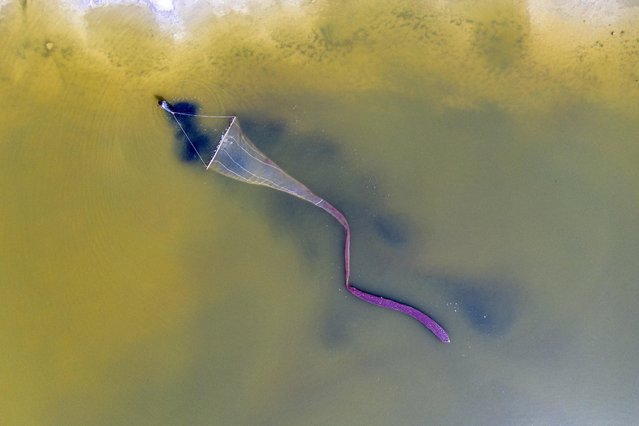 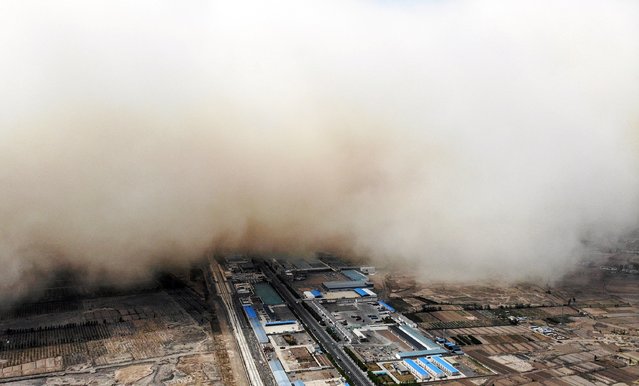 This aerial photo taken on April 25, 2021 shows a sandstorm engulfing a village in Linze county, in the city of Zhangye in China's northwestern Gansu province. (Photo by AFP Photo/China Stringer Network) 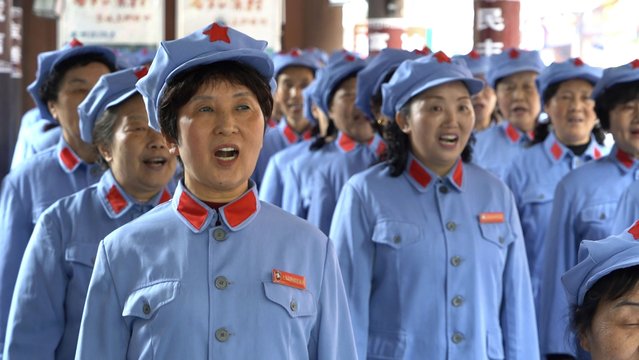 A group of local retirees gather to sing Red Army revolutionary songs in the city of Zunyi in Southwestern China's Guizhou province on April 12, 2021. The group, whose members' ages range from their late 50s to over 80, gather regularly to sing to tourists visiting the nearby Zunyi Memorial Museum. The museum, located at the site of the Zunyi Conference, was where the late Communist leader Mao Zedong rose to power. (Photo by Emily Wang/AP Photo) 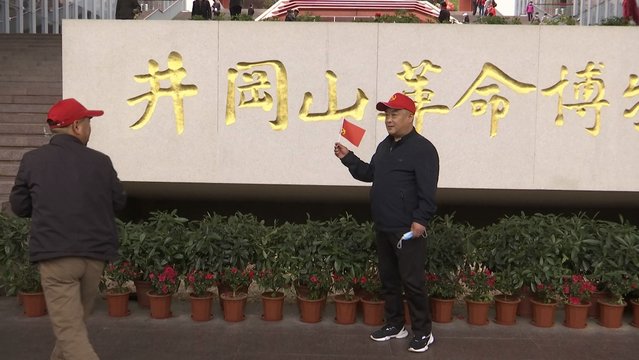 A tourists holds a flag as he poses for photographs in front of the sign for the Jinggangshan Revolution Museum in Jinggangshan in southeastern China's Jiangxi province, on April 8, 2021. On the hundredth anniversary of the Chinese Communist Party, tourists in China are flocking to historic sites and making pilgrimages to party landmarks. (Photo by Emily Wang/AP Photo) 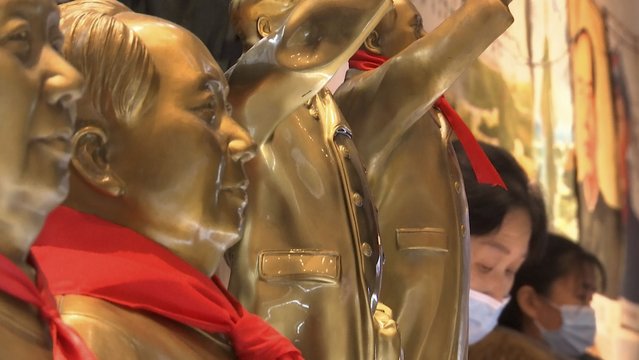 Souvenirs of the late Communist leader Mao Zedong are sold at a gift shop at the Jinggangshan Revolution Museum in Jinggangshan in southeastern China's Jiangxi province, on April 8, 2021. (Photo by Emily Wang/AP Photo) 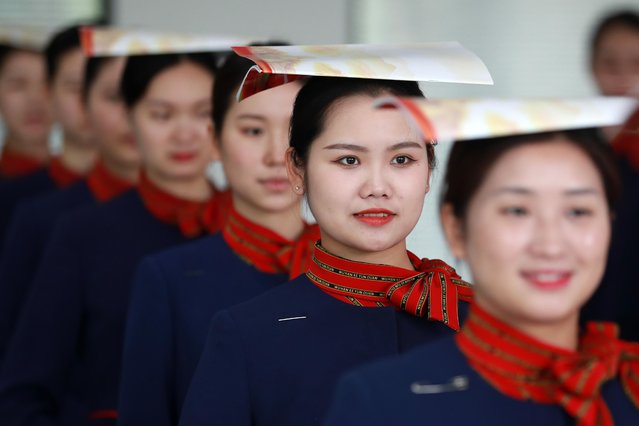 High-speed train attendants take part in a training session for the coming May Day holiday travel rush on April 27, 2021 in Wuhan, Hubei Province of China. (Photo by Zhao Jun/VCG via Getty Images) 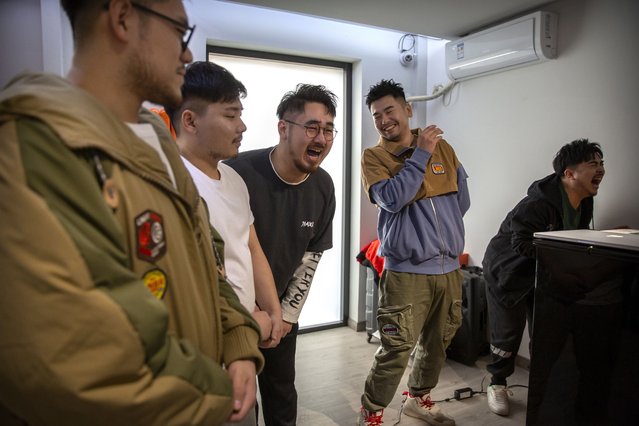 Members of the Chinese music group Produce Pandas, from left, Husky, Otter, DING, Mr. 17, and Cass, react while practicing their vocals during rehearsals in Beijing, Thursday, April 15, 2021. The Produce Pandas proudly call themselves “the first plus-sized boy band in China”. That's a radical departure from the industry standard set by Korean super groups such as BTS, whose lanky young members are sometimes referred to in China as “little fresh meat”. (Photo by Mark Schiefelbein/AP Photo) 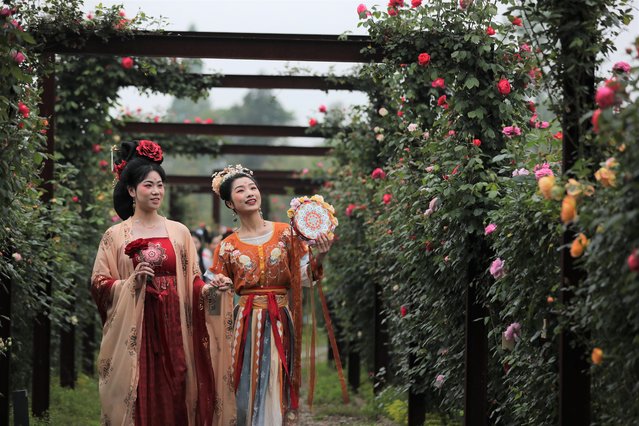