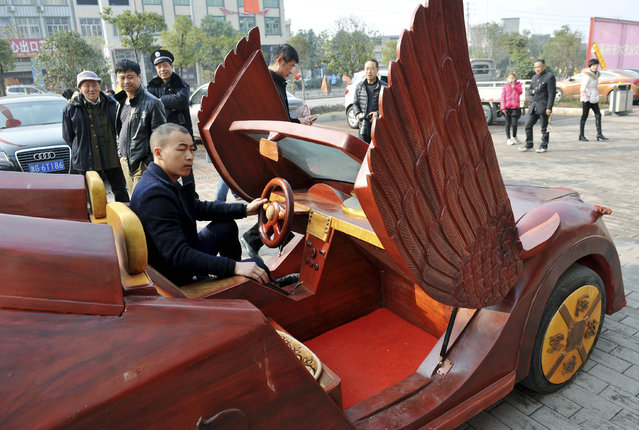 Yu Jietao, 26-year-old wood carver, sits in his homemade wooden car along a street in Guangfeng county of Shangrao, Jiangxi province, China February 9, 2015. The car can travel as fast as 30 km (18.6 miles) per hour, local media reported. (Photo by Reuters/Stringer) 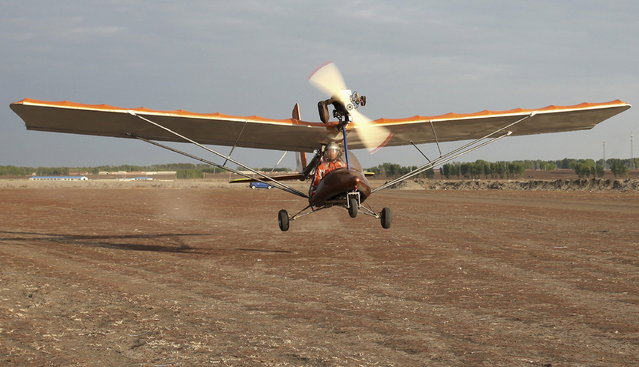 Yang Shijun, a 45-year-old manager of a construction material company, flies his homemade plane during a test run in Changchun, Jilin province, China, May 9, 2015. (Photo by Reuters/Stringer) 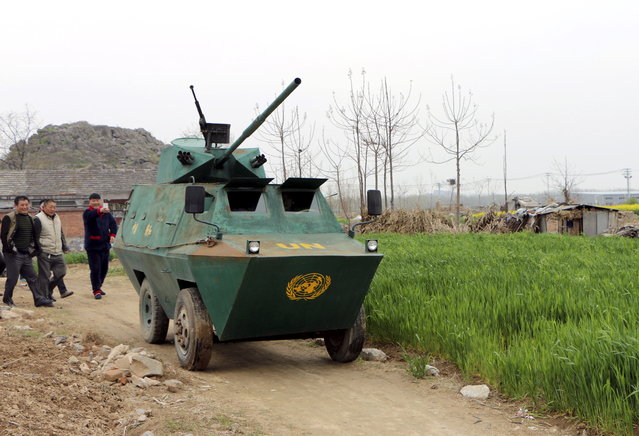 Villagers look on as a homemade armored vehicle, built by local 35-year-old farmer Liu Shijie (in the vehicle), drives on a dirt road at a village in Huaibei, Anhui province, China April 7, 2015. (Photo by Reuters/Stringer) 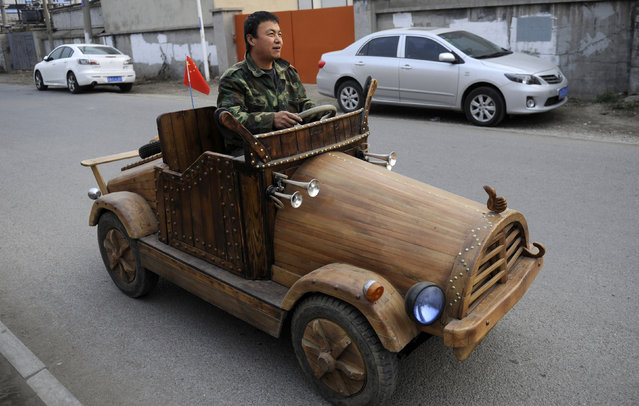 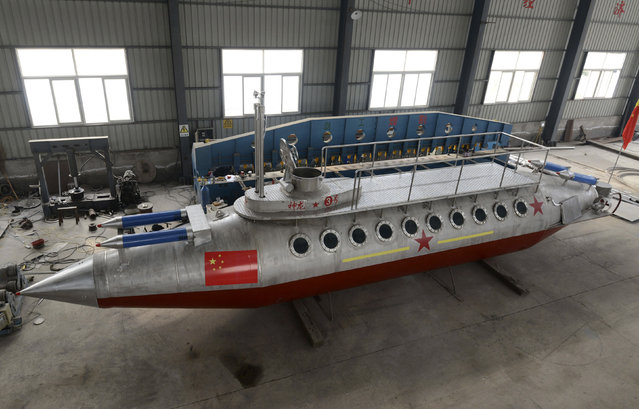 A homemade submarine named “Shenlong-3” made by Zhang Junlin, a 62-year-old retired prison guard, is pictured at a factory in Fuyang, Anhui province December 20, 2014. (Photo by Reuters/China Daily) 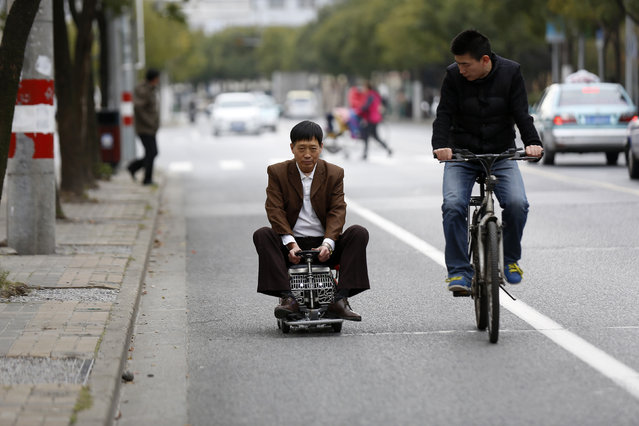 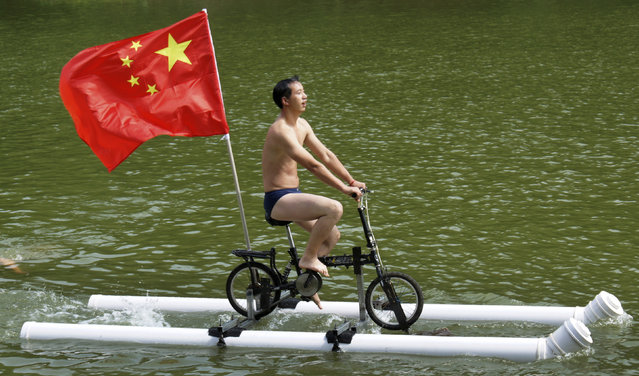 A Chinese flag is seen as Liu Wanyong performs on his invention, an improvised bicycle which is held afloat by plastic tubes, in Zhenning, Guizhou province, August 29, 2013. (Photo by Reuters/Stringer) 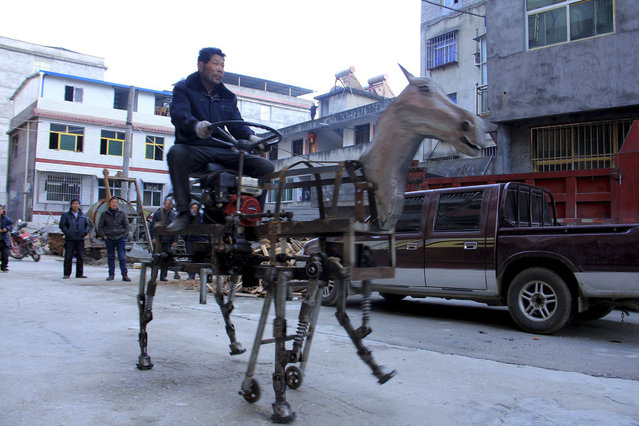 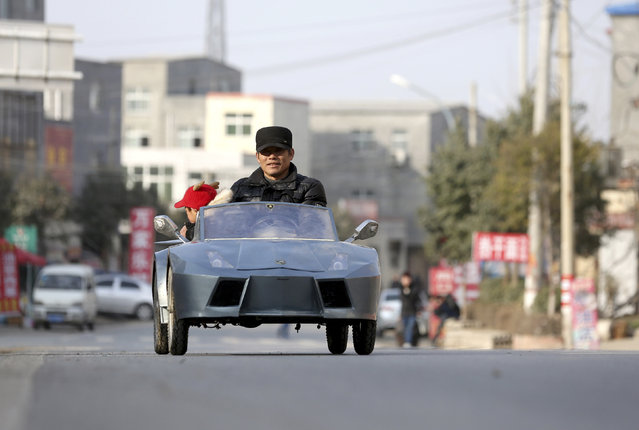 Guo, a farmer in his 50s, drives his self-made scale replica of a Lamborghini with his grandson on a street in Zhengzhou, Henan province February 19, 2014. (Photo by Reuters/China Daily) 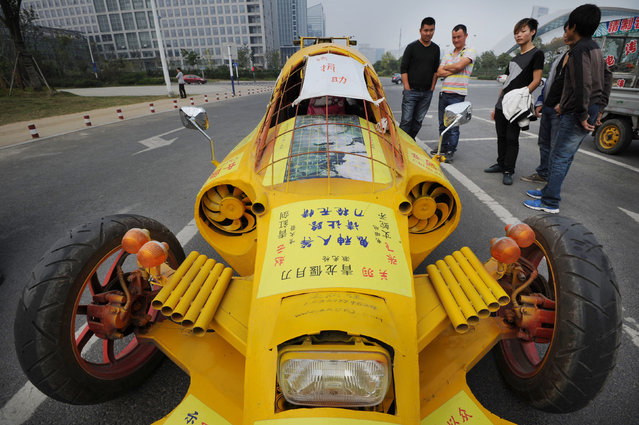 A self-made car built by Zhu Runqiang (not pictured) is seen in Hefei, Anhui province, October 21, 2013. Grassroots inventor Zhu, 47, built the car with components he collected from used vehicles. The car reaches a highest speed of 60km/h, according to local media. (Photo by Reuters/China Daily) 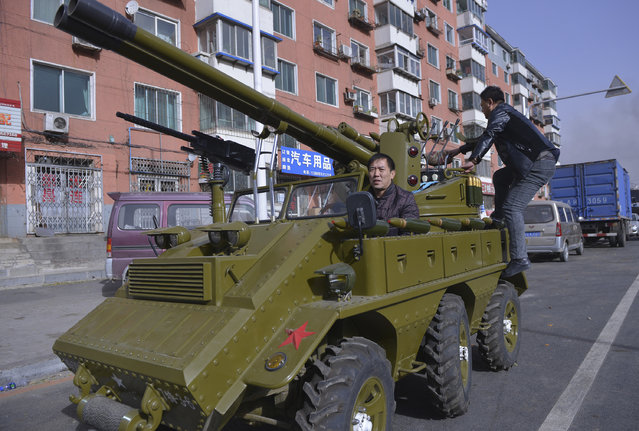 A man surnamed Zhang sits in his home-made armored vehicle look-alike on a street in Shenyang, Liaoning province, November 12, 2014. Zhang and his friends converted two cars into these two vehicles for his son, and will be displaying them on show at a local park. The cannons on the vehicles can fire paintballs and smoke shells, local media cited Zhang as saying. (Photo by Reuters/Stringer) 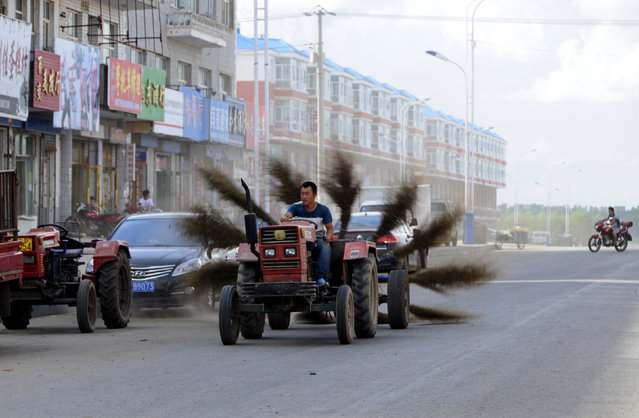 A man drives an improvised tractor with 12 brooms tied in the rear, as he tries to clean a road in Mohe, Heilongjiang province, August 31, 2013. (Photo by Reuters/Stringer) 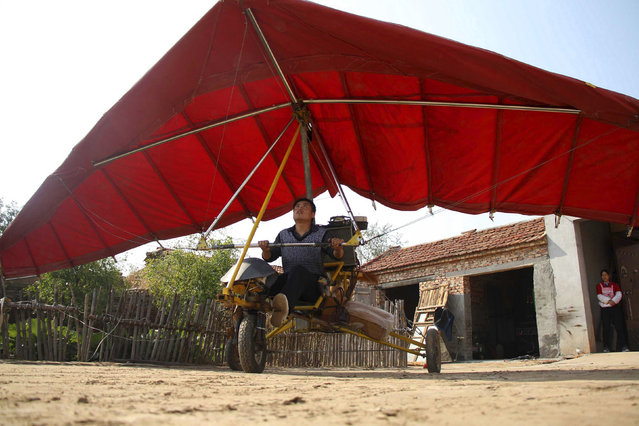 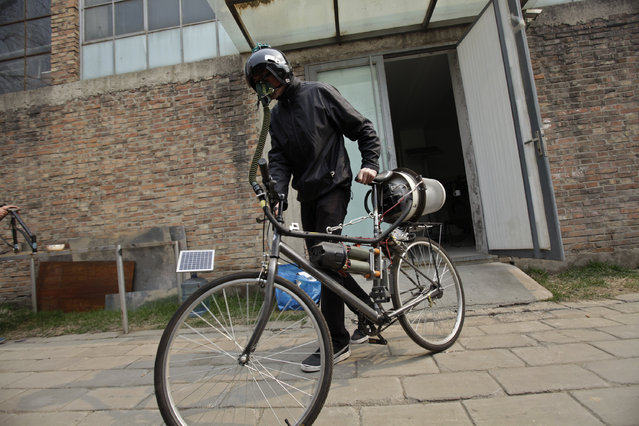 Artist Matt Hope, wearing a helmet, pushes his air filtration bike out from his studio on a hazy day in Beijing, March 26, 2013. Using an IKEA perforated garbage can, moped helmet, fighter-pilot breathing mask, wheel-powered generator and home air filtration system, Beijing-based artist Matt Hope built a “breathing bicycle” as a way of protecting himself from air pollution. While pedaling, electricity is generated for the power to activate the system to filter out haze and provide the rider with clean air, local media reported. (Photo by Petar Kujundzic/Reuters) 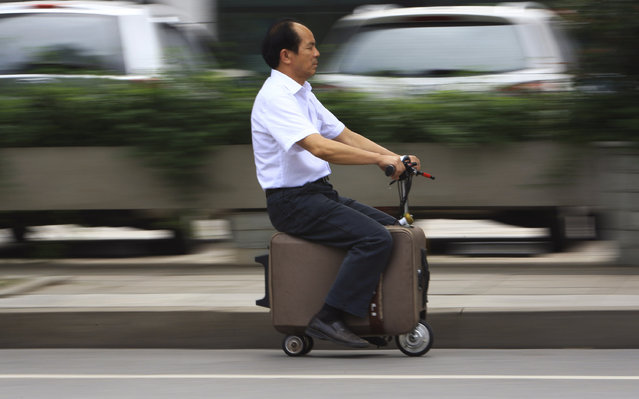 He Liang rides his homemade suitcase vehicle along a street in Changsha, Hunan province May 28, 2014. He spent 10 years modifying the suitcase into a motor-driven vehicle. The suitcase has a top speed of up to 20km/h and the power capacity to travel up to 50-60km after one charge, according to local media. (Photo by Reuters/China Daily) 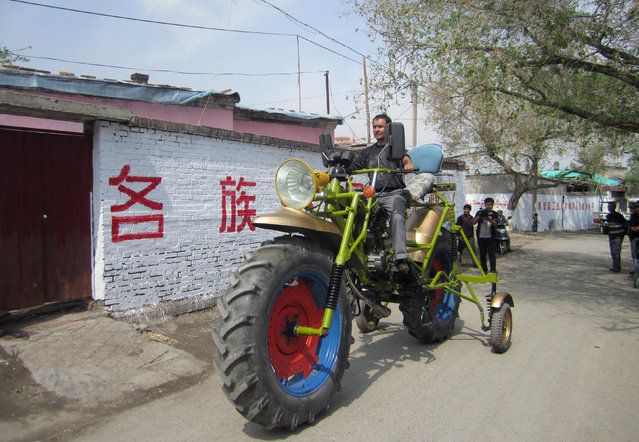 An ethnic Uighur man Abulajon drives his self-made motorcycle during a test in Manas county, Xinjiang Uighur autonomous region, April 27, 2013. Abulajon, a 30-year-old Uighur worker from a sewage treatment plant, spent a year making his 0.3 tonnes motorcycle measuring 4.3 metres (14 feet) in length and 2.4 metres (7.8 feet) in height, although it makes it impossible for him to drive it on the street. It cost him about 8000 yuan ($1300) to buy all the parts from salvage stations and the converted engine can power the motorcycle with a speed of 40 km per hour (24.8 miles per hour), local media reported. (Photo by Reuters/China Daily) 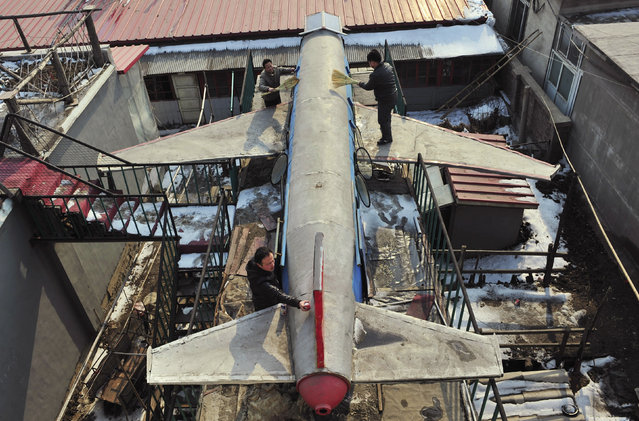 Li Jingchun (top L), a 58-year-old farmer, works with his family members on his self-made aircraft on top of his house in Xiahe village located in Shenyang, Liaoning province, China, February 28, 2012. The 5m long, 1.5m wide plane, mostly made of recycled iron plates, cost the aircraft enthusiast and his family two years and more than 40,000 yuan ($6,349), according to local media. (Photo by Sheng Li/Reuters) 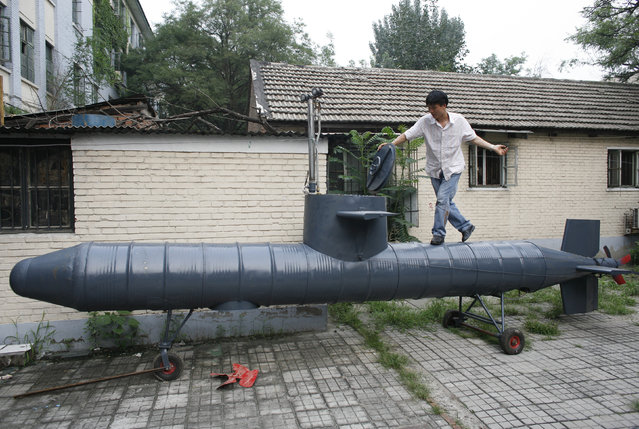 Tao Xiangli stands on his homemade submarine in a courtyard in Beijing July 10, 2008. (Photo by Reinhard Krause/Reuters) 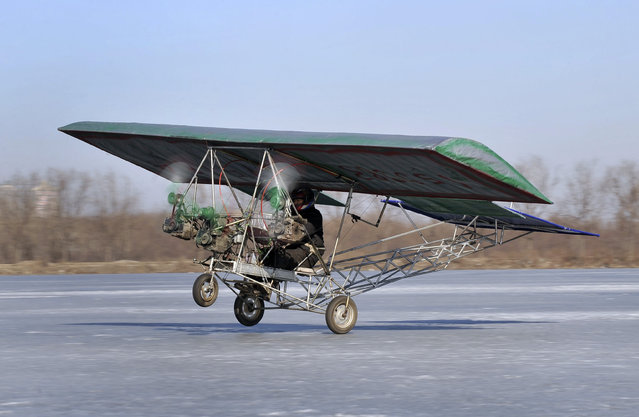 Ding Shilu, an automobile mechanic, carries out a test-flight for his self-made aircraft at a frozen reservoir in Shenyang, Liaoning province February 25, 2011. The aircraft which weights about 130 kg (287 lbs) and made of recycled materials including three motorbike engines and plastic cloth, cost about 2600 yuan ($395), local media reported. (Photo by Reuters/Stringer) 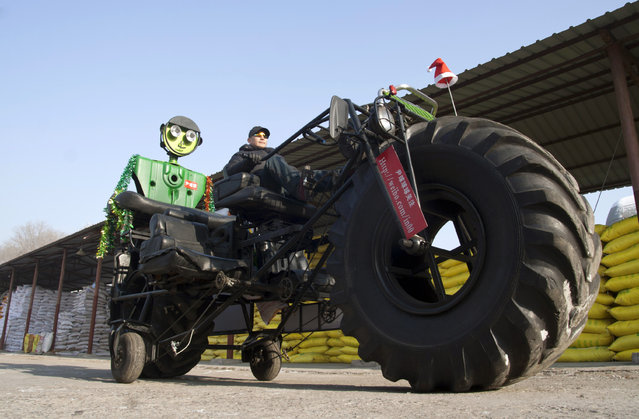 Zhang Yali, 49, tests a giant bicycle designed and made by him and his friends outside a rented warehouse in Jilin, Jilin province, China, December 25, 2011. The 3.2-metre-high and 5.5-metre-long three-seated giant bicycle, weighing over one tonne, cost Zhang more over 20,000 yuan (3,156 USD). Zhang spent two months making this bike as a gift for his son, a 25-year-old part-time cartoonist currently living in Shenzhen, Guangdong province. (Photo by Reuters/China Daily) 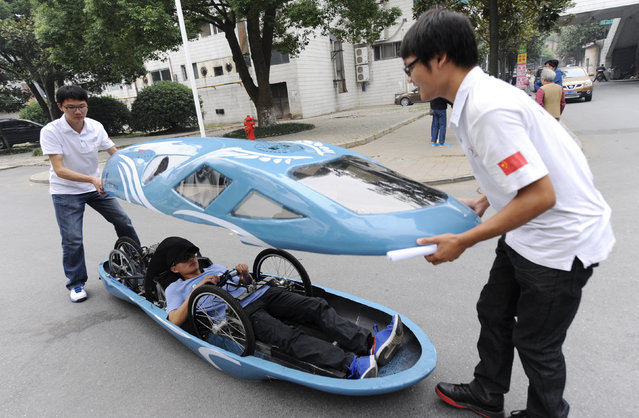 Students open the top of a newly made fuel-efficient vehicle on a street inside Hunan University after a test drive in Changsha, Hunan province October 8, 2013. (Photo by Reuters/Stringer)
Edit Del
13 May 2015 10:51:00, post received 0 comments
Publication archive:
←   →
Popular tags:
All tags
Last searches: