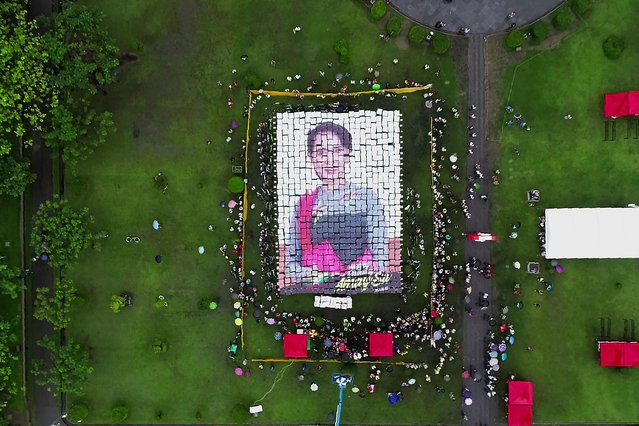 This aerial handout picture taken and provided on June 19, 2019 by one of the event organizers, Tharr Zaw, shows supporters making a mosaic portrait of Myanmar State Counsellor Aung San Suu Kyi with placards during an event to celebrate her 74th birthday in Yangon. (Photo by Tharr Zaw/AFP Photo) 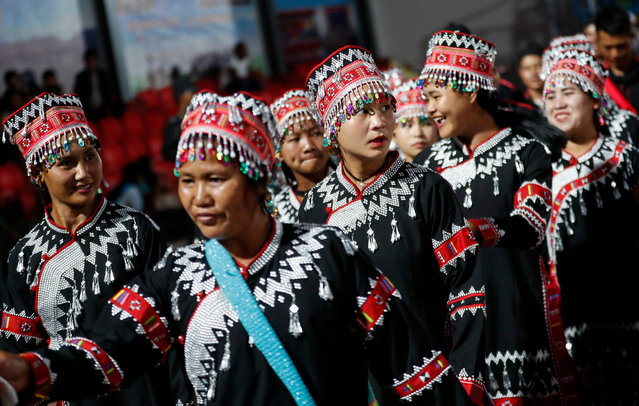 Wa ethnic women in traditional dresses attend a rehearsal session for the 30th anniversary of Wa State celebration in Panghsang, also called Pang Kham, of autonomous Wa region, north-eastern Myanmar, 15 April 2019. Panghsang, the administrative capital of Wa independent region has begun preparing the 30th anniversary of Wa State founding which will be held on 17 April. Wa has declared its independence on 17 April 1989. Although the government of Myanmar does not recognize the sovereignty of Wa State, Myanmar military cease fired with them on 09 May 1989. Wa State has been notorious for drug smuggling in the Golden Triangle of the last 30 years, although it declared its region a drug-free zone in 2005. (Photo by Lynn Bo Bo/EPA/EFE) 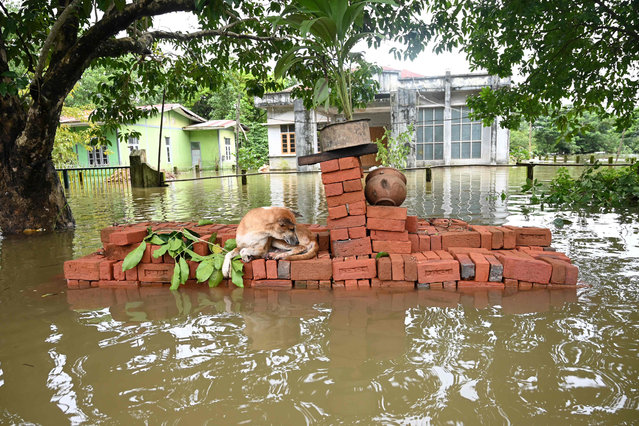 A dog rests on higher ground as it is surrounded by floodwaters in Shwegyin township, Bago Region on August 8, 2019. Raging monsoon flooding across Myanmar has forced tens of thousands of people from their homes in recent weeks, officals said on August 8, as seasonal rains pummel the nation. (Photo by Ye Aung Thu/AFP Photo) 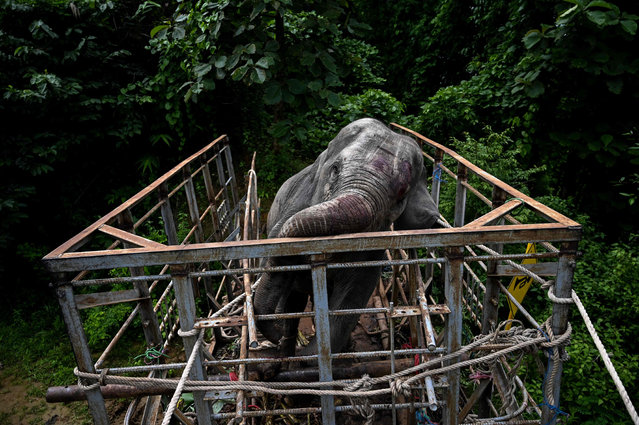 This photo taken on August 3, 2019 shows a veterinarian administering medicine before a wild elephant is released into the Zarmaye nature reserve located in the Bago region. Two wild elephants, which had been foraging villages and a highway for food in Yangon, were caught on August 3 and released into the Zarmaye nature reserve in the Bago region. (Photo by Ye Aung Thu/AFP Photo) 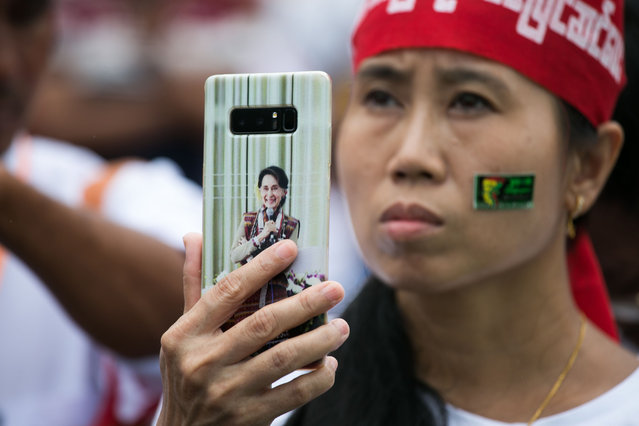 A woman holding a mobile phone with an image of Myanmar's State Counsellor Aung San Suu Kyi takes a video during a protest in support of amendments to the 2008 Myanmar Constitution in Yangon on July 17, 2019. (Photo by Sai Aung Main/AFP Photo) 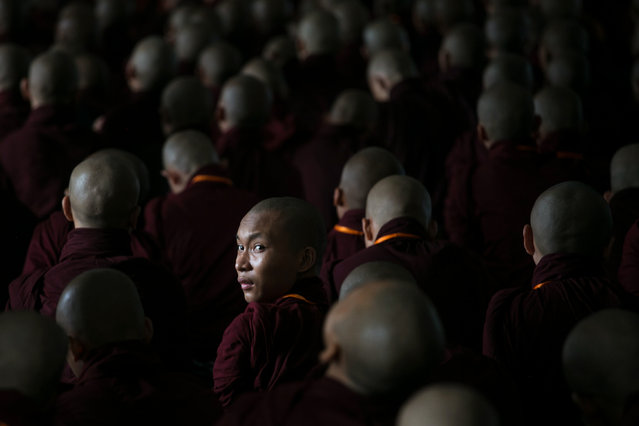 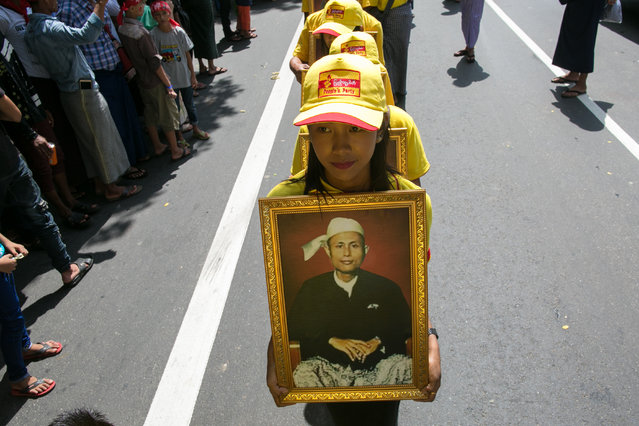 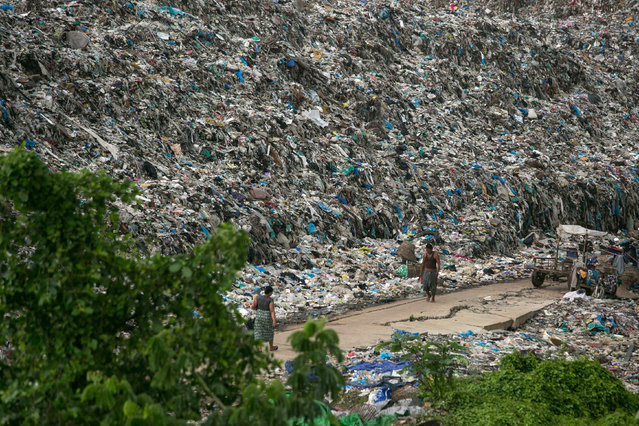 People walk past a garbage dump on the outskirts of Yangon, Myanmar on June 5, 2019. (Photo by Sai Aung Main/AFP Photo) 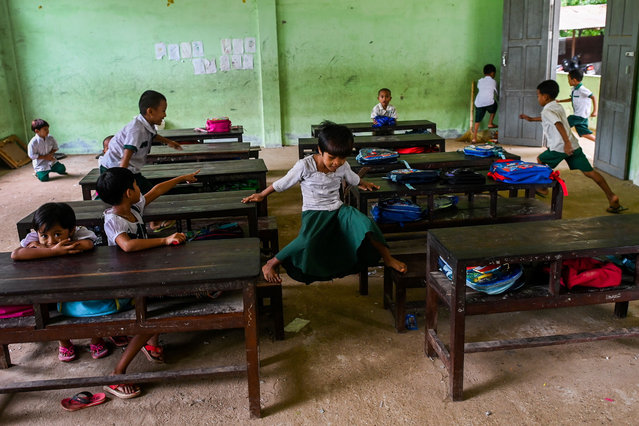 In this picture taken on June 18, 2019 students play in their classroom of a government school on the outskirts of Yangon, Myanmar. (Photo by Ye Aung Thu/AFP Photo) 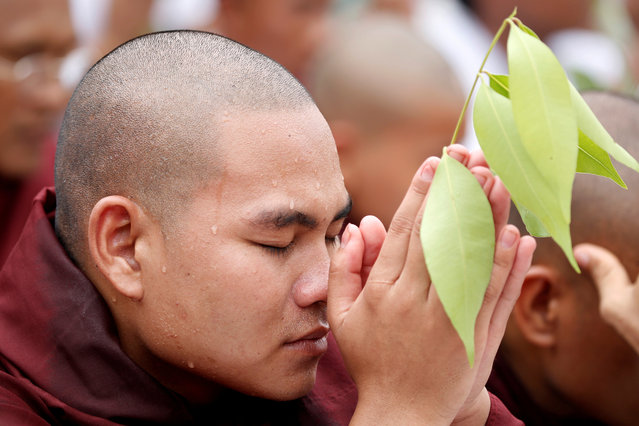 A supporter of a hard-line Buddhist monk Wirathu prays at Shwedagon Pagoda in Yangon, following the monk's arrest warrant on a charge of sedition in Yangon, Myanmar, May 30, 2019. (Photo by Ann Wang/Reuters) 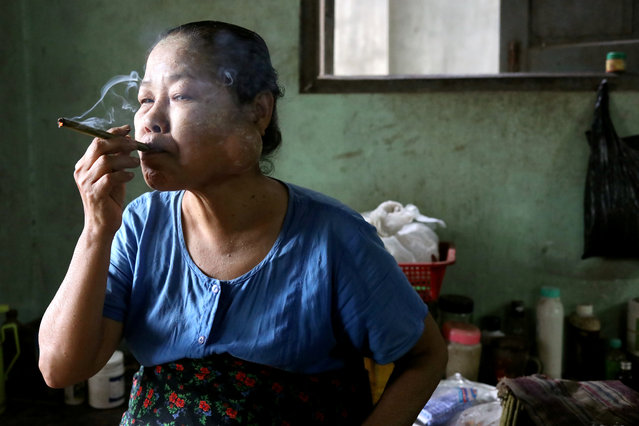 A woman smokes a cheroot, a traditional cigar from Myanmar in Bago, Myanmar, June 2, 2019. (Photo by Ann Wang/Reuters) 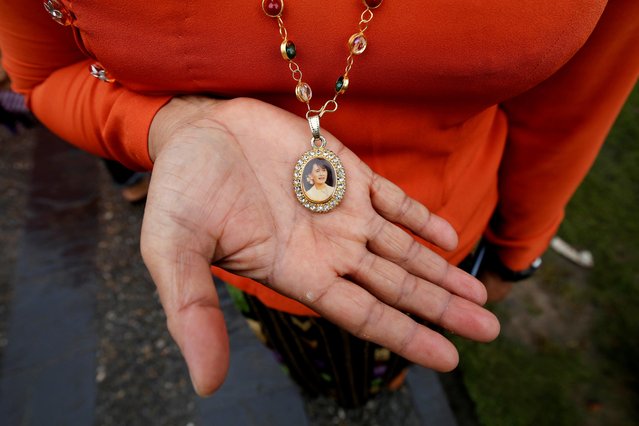 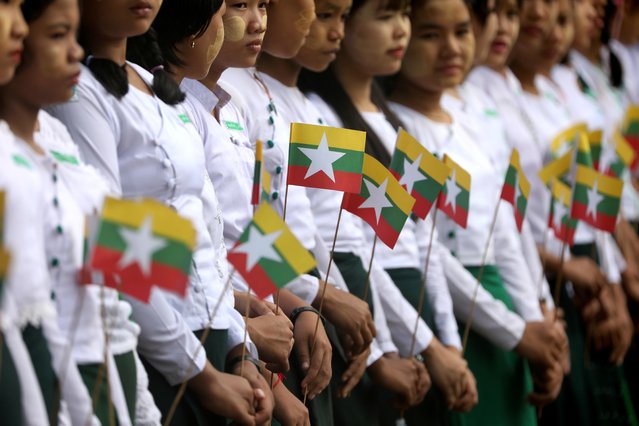 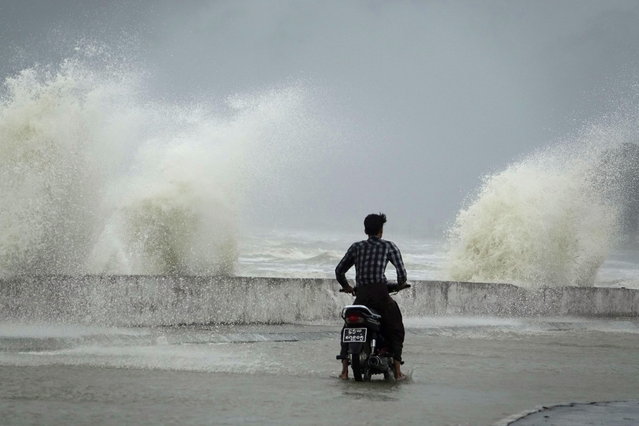 A man rides a motorbike along a coastal road as strong winds and waves batter the shoreline at Sittwe beach during monsoon season in Sittwe, Rakhine state, Myanmar, 06 July 2019. (Photo by Nyunt Win/EPA/EFE) 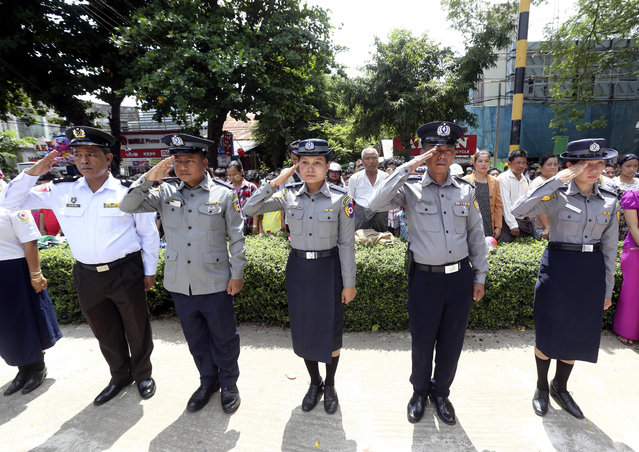 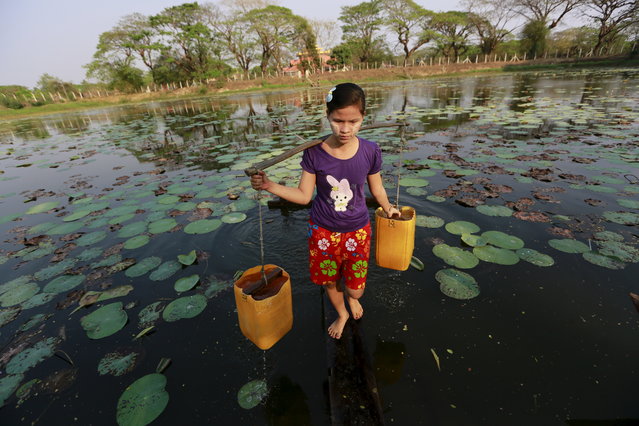 A girl collects drinking water at Dala river outside Yangon, Myanmar on March 3, 2016. Some 650 million people, or one in 10 of the world's population, have no access to safe water, putting them at risk of infectious diseases and premature death. Dirty water and poor sanitation can cause severe diarrhoeal diseases in children, killing 900 under-five a day across the world, according to United Nations estimates. World Water Day, marked this year on March 22, highlights various concerns about the world's water resources, and in 2016 is focusing on how good access to safe water can create paid work and contribute to a greener economy. (Photo by Soe Zeya Tun/Reuters) 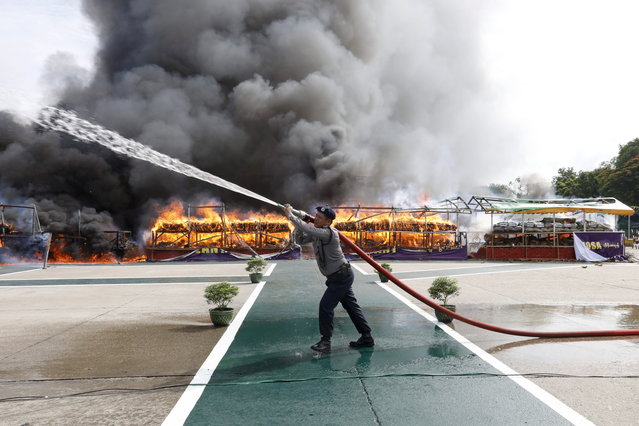 A police officer uses a water cannon on a temporary tent to reduce heat near a pile of illegal drugs burning during a “Destruction Ceremony of Seized Narcotic Drugs”, held to mark the International Day against Drug Abuse, in Yangon, Myanmar, 26 June 2019. Myanmar authorities destroyed an assortment of drugs worth around 301.16 million US dollar in Yangon, Mandalay and Taunggyi. (Photo by Nyein Chan Naing/EPA/EFE) 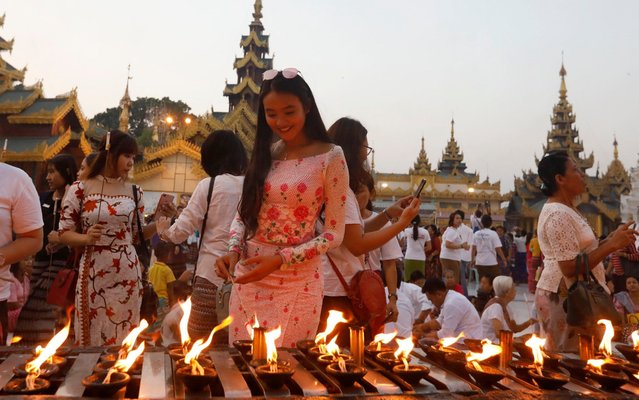 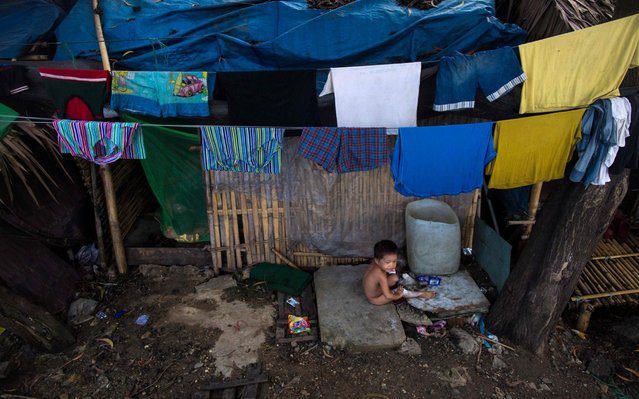 A child plays in front of his house in Hlaing Tharyar township on the outskirts of Yangon on June 26, 2019. (Photo by Sai Aung Main/AFP Photo) 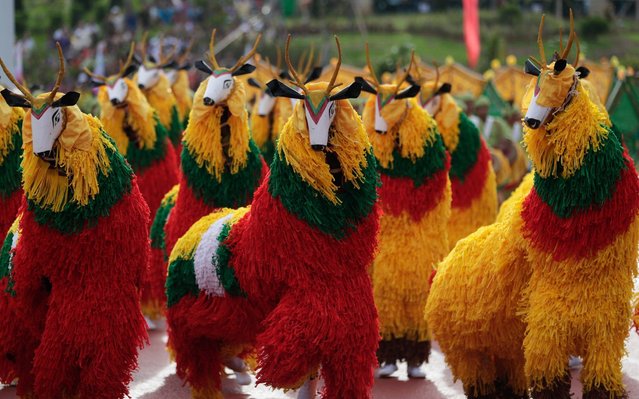 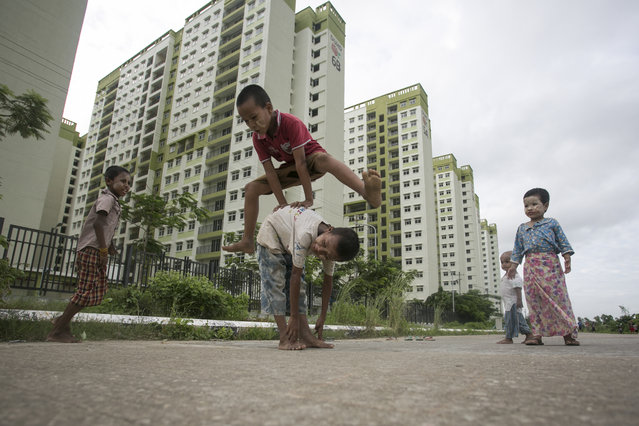