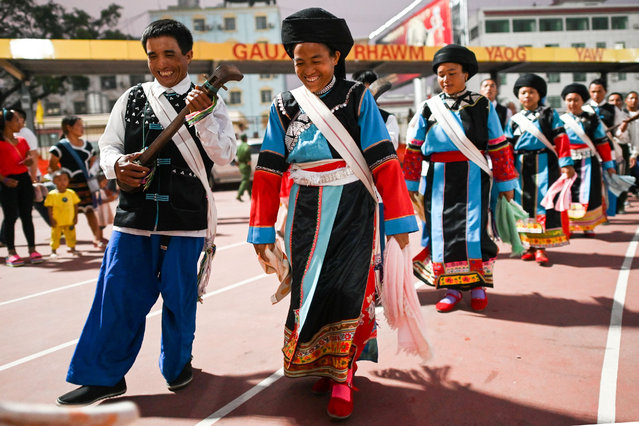 People wearing traditional outfits participate in a rehearsal in Panghsang on April 15, 2019, ahead of a military parade to celebrate 30 years of a ceasefire signed with the Myanmar military. (Photo by Ye Aung Thu/AFP Photo) 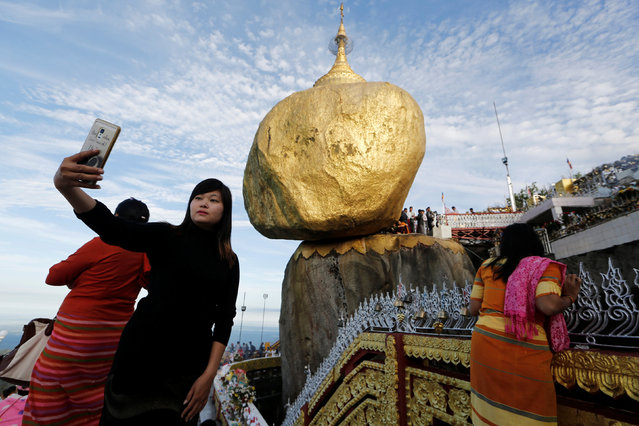 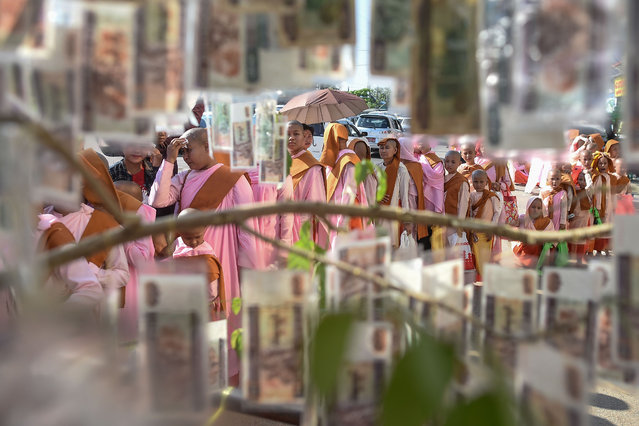 Novice monks walking during alms procession is seen through a hanging donations of Myanmar currency notes during Buddhist religious festivities in Yangon on November 22, 2018. From grumbling neighbors to witty memes of the Buddha begging a man with speakers to “stop your noise”, the cacophony around Myanmar' s annual Tazaungdaing festival is revving up debate over the modern racket accompanying religious customs. (Photo by Ye Aung Thu/AFP Photo) 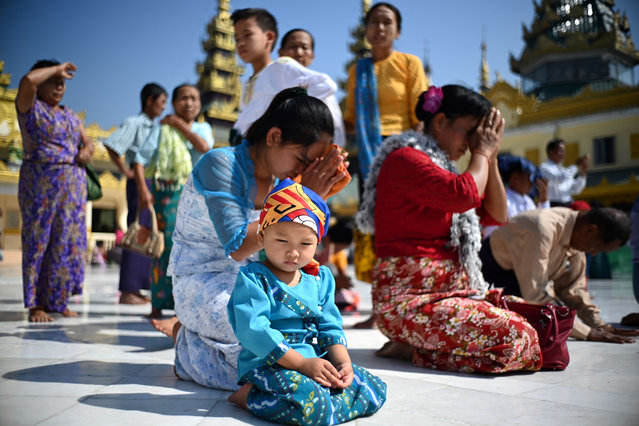 A child join other devotees praying at the Shwedagon Pagoda in Yangon, Myanmar on February 20, 2019. (Photo by Jewel Samad/AFP Photo) 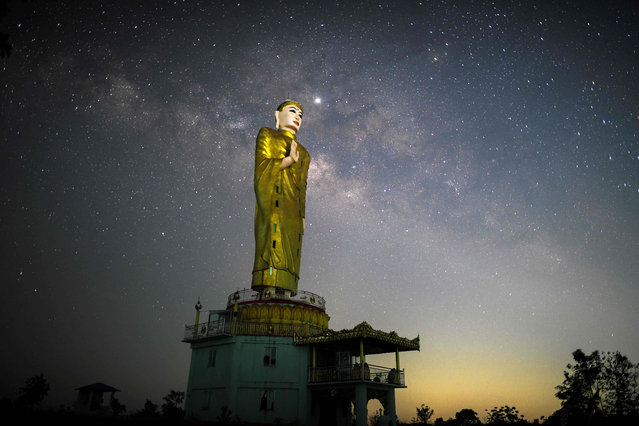 This long-exposure picture shows the Milky Way behind a statue of Buddah in Taikkyi early on April 9, 2019. (Photo by Ye Aung Thu/AFP Photo) 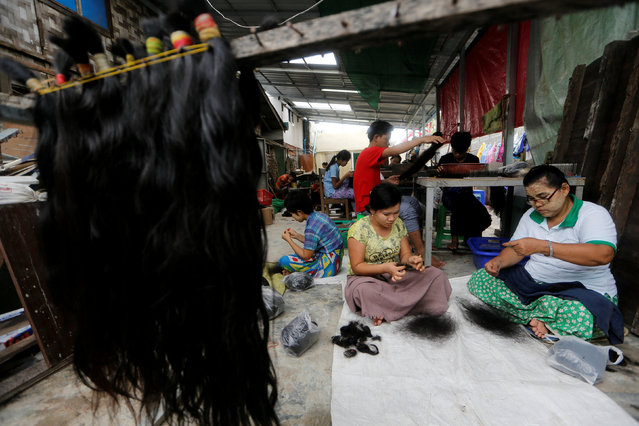 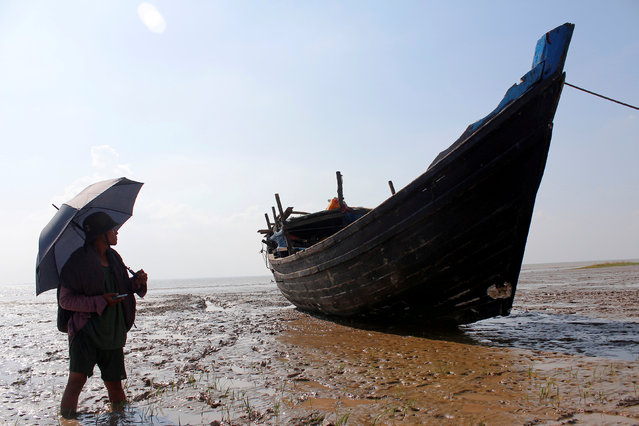 A stranded boat which was used by Rohingya Muslims is seen at the Thande village beach outside Yangon, Myanmar November 16, 2018. (Photo by Myat Thu Kyaw/Reuters) 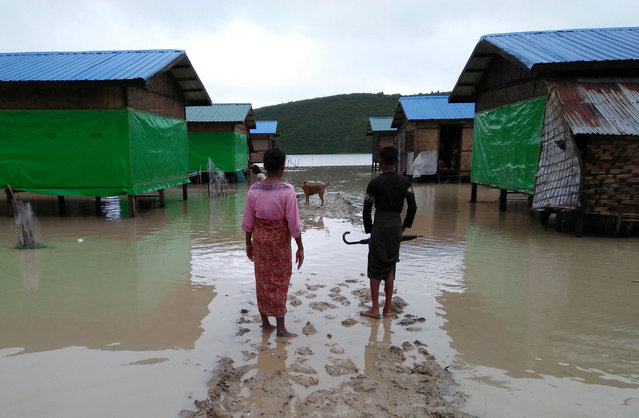 Muslim residents at Taungpaw an internally displaced people's camp walk through the flood to reach the new house built by the Myanmar government in central Rakhine, Myanmar, June 14, 2018. (Photo by Reuters/Stringer) 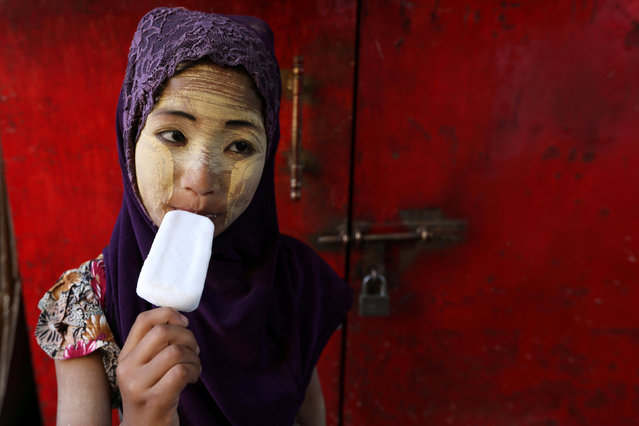 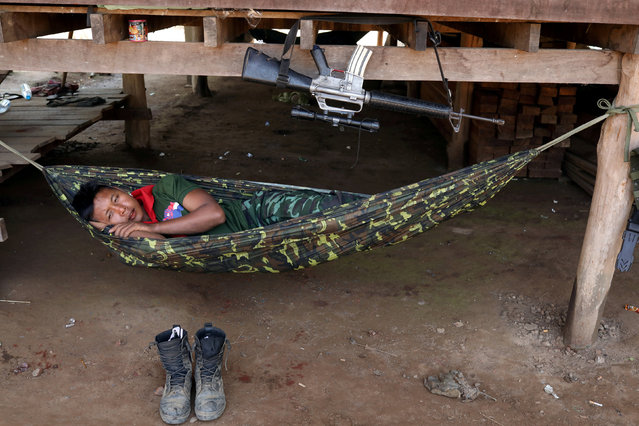 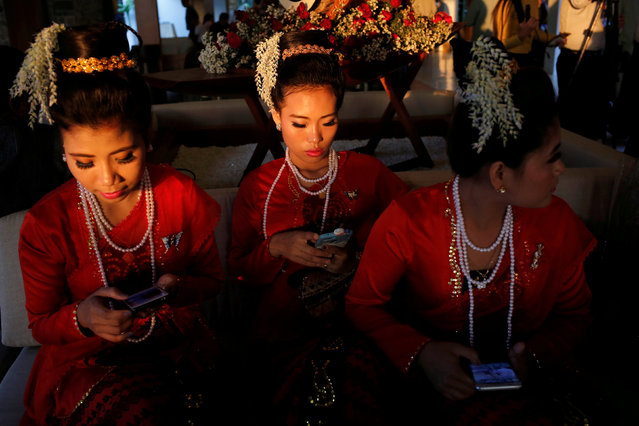 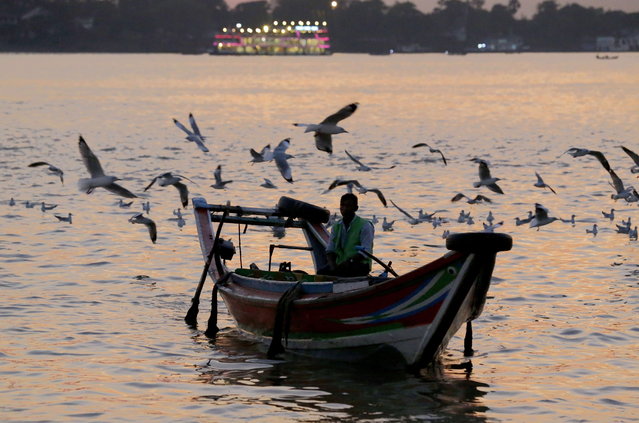 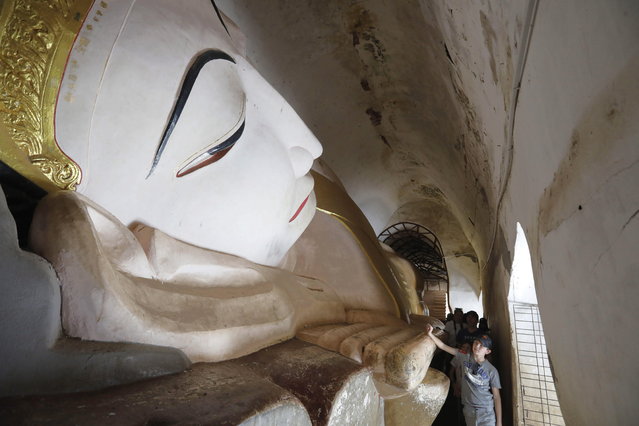 Foreign tourists inspect the large reclining Buddha statue inside Manuha Temple in Bagan, the ancient temple city of Myanmar, Mandalay region, Myanmar, 27 December 2018. Bagan, in the southwest of Mandalay, is located on a plain and features some 2,000 Buddhist temples, stupas and pagodas, which were constructed from the 11th to the 13th century. (Photo by Nyein Chan Naing/EPA/EFE) 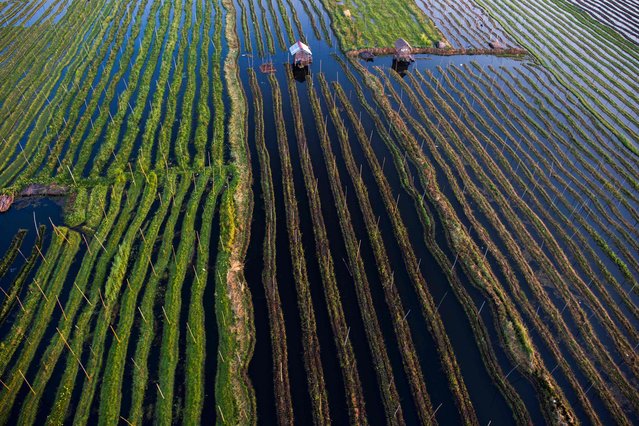 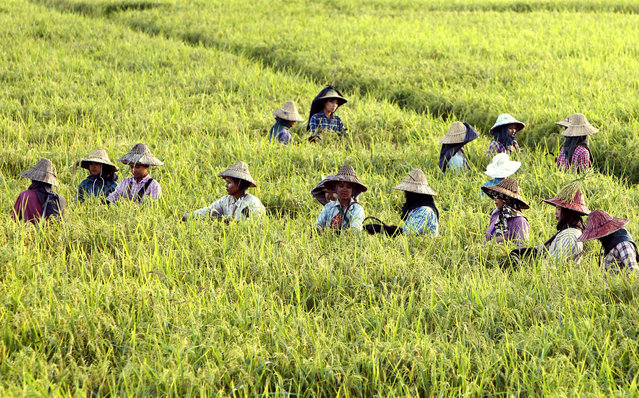 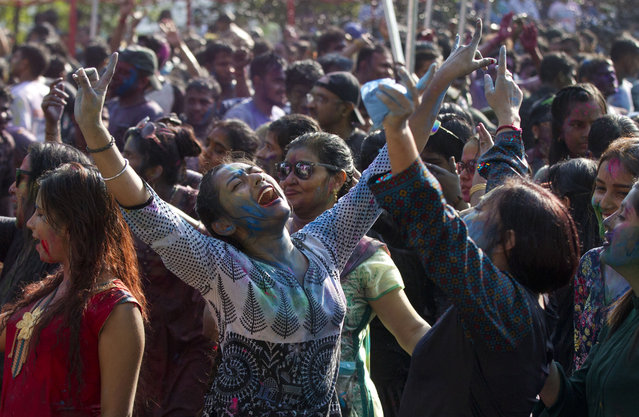 In this Wednesday, March 20, 2019, file photo, revelers dance as they celebrate Holi, also known as the Festival of Colors, organized by the Hindu community at a park in Yangon, Myanmar. (Photo by Thein Zaw/AP Photo) 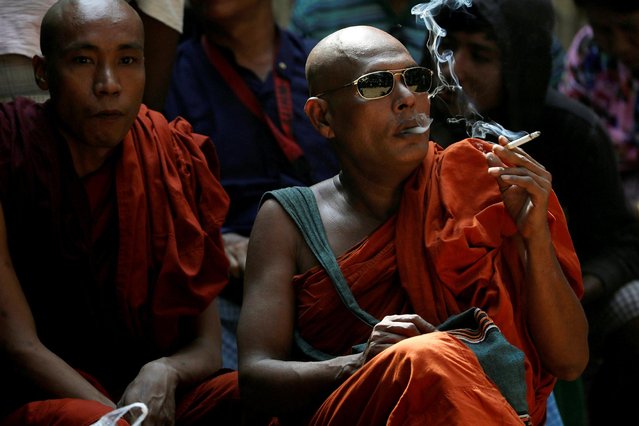 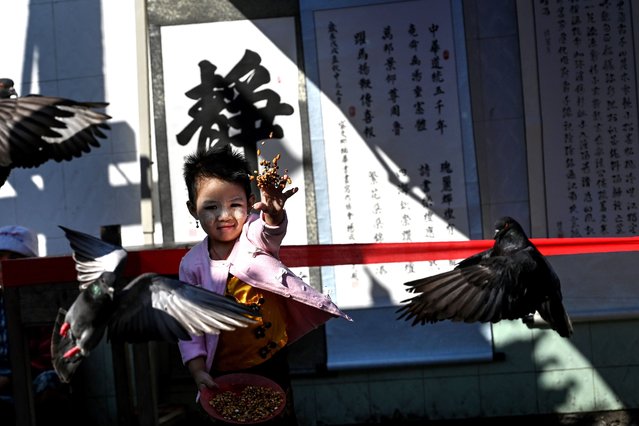 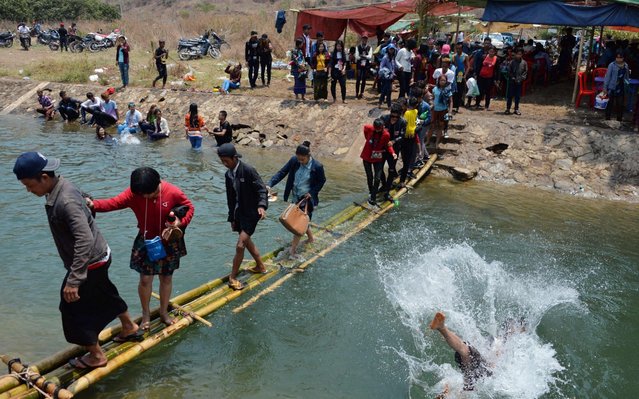 Revellers walk along a makeshift bridge constructed out of bamboo to cross the Paung Laung Dam during celebrations for the Thingyan festival, also known as the Buddhist New Year, in Naypyidaw on April 16, 2019. (Photo by Thet Aung/AFP Photo) 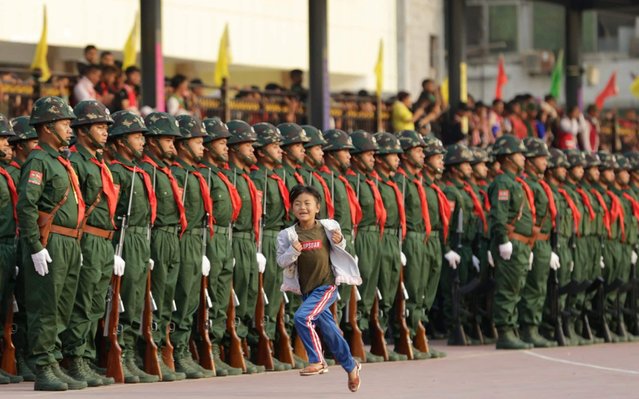 A young girl runs past UWSA military contingents before a parade held to mark the 30th anniversary of Wa State in Panghsang, also called Pang Kham of autonomous Wa region, north-eastern Myanmar, 17 April 2019. United Wa State Army (UWSA) celebrated the 30th anniversary of Wa State founding in Panghsang, the administrative capital of the Wa independent region. Wa declared itself as an independent State on 17 April 1989. Although the government of Myanmar does not recognize the sovereignty of Wa State, Myanmar military has adopted a ceasefire with the state since 09 May 1989. Wa State has been notorious for drug smuggling in the Golden Triangle of the last 30 years, although it declared its region a drug-free zone in 2005. (Photo by Lynn Bo Bo/EPA/EFE/Rex Features/Shutterstock) 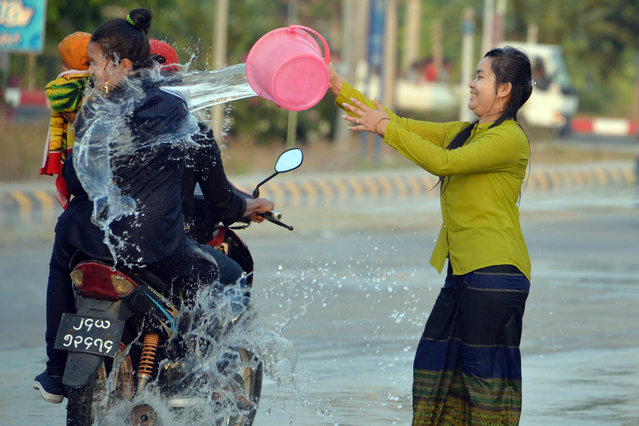