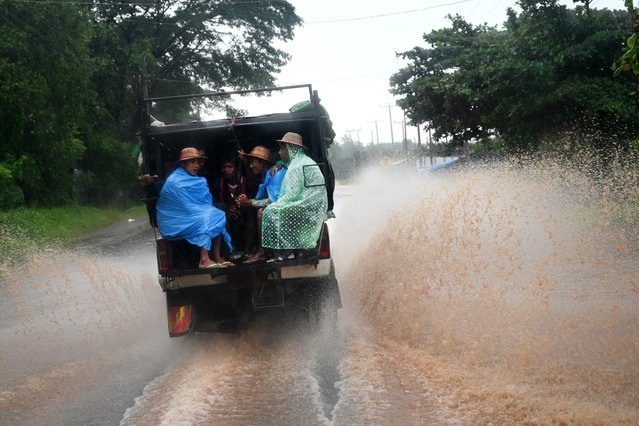 People sit in the back of a truck during heavy rain in Kytehto township, Mon state on August 12, 2019. Myanmar troops and emergency responders scrambled to provide aid in flood-hit parts of the country after rising waters forced residents to flee by boat and a landslide killed at least 52 people. (Photo by Ye Aung Thu/AFP Photo) 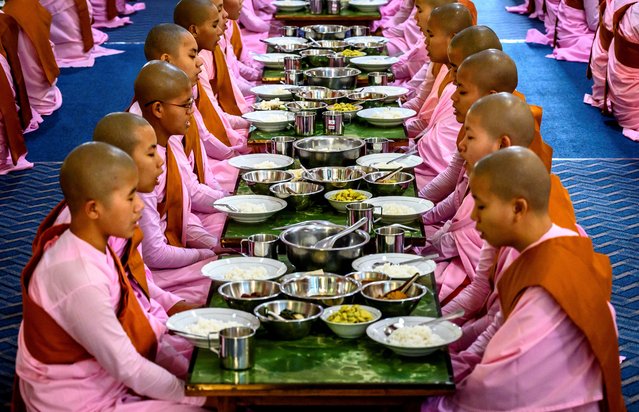 This photograph taken on January 15, 2020 shows Buddhist novice nuns praying before breakfast at a monastic school in Sagaing outside Mandalay. In keeping with Buddhist traditions, both nuns and monks refrain from eating from midday until breakfast the following morning. Myanmar is a Buddhist-majority country. (Photo by Mladen Antonov/AFP Photo) 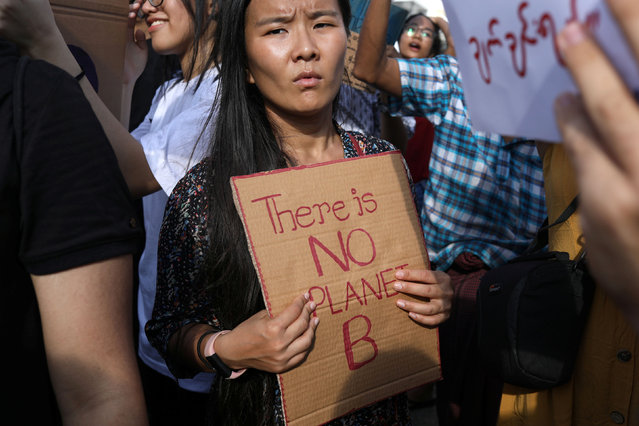 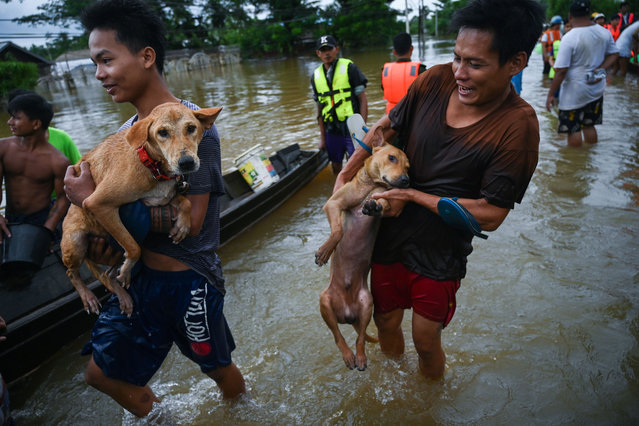 Residents carry their dogs to a boat as floodwaters submerged areas of Ye township in Mon State on August 11, 2019. Myanmar troops deployed to flood-hit parts of the country on August 11 to help with relief efforts after rising waters left thousands stranded and the death toll from a landslide jumped to 51. (Photo by Ye Aung Thu/AFP Photo) 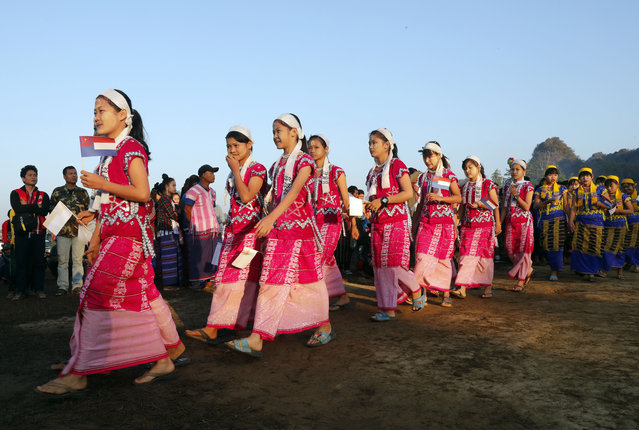 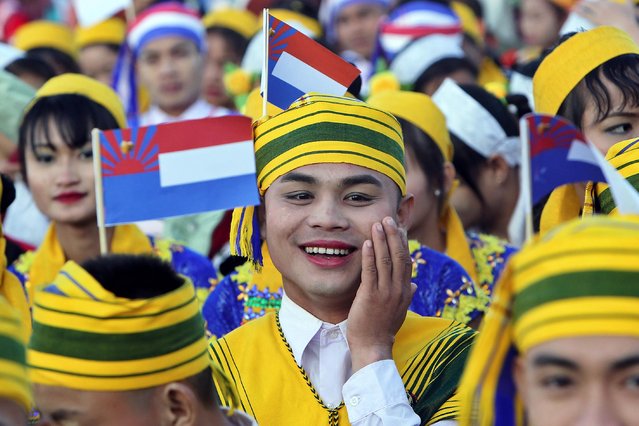 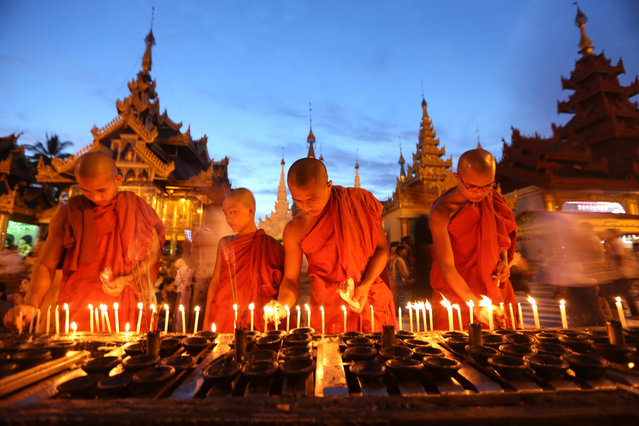 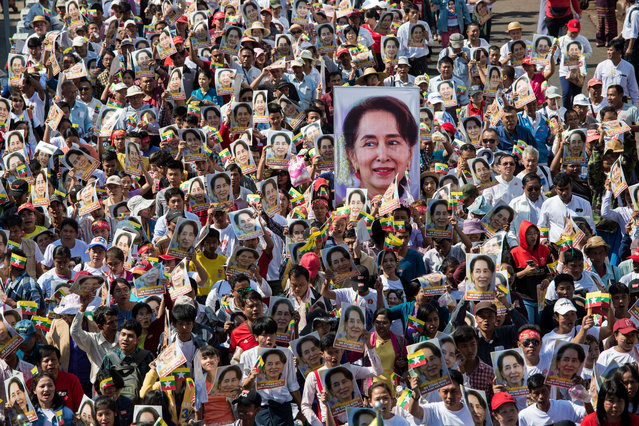 People participate in a rally in support of Myanmar's State Counsellor Aung San Suu Kyi, as she prepares to defend Myanmar at the International Court of Justice in The Hague against accusations of genocide against Rohingya Muslims, in Yangon on December 10, 2019. Nobel peace laureate Aung San Suu Kyi is set on December 10 to personally defend Myanmar in The Hague against accusations of genocide, in a remarkable fall from grace for the woman once hailed as a rights icon. (Photo by Sai Aung Main/AFP Photo) 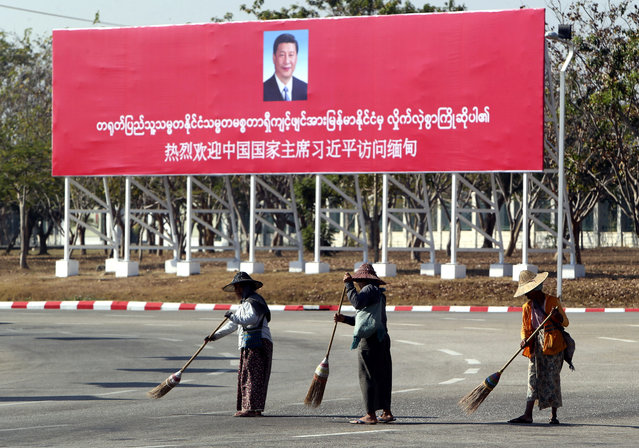 Municipal workers sweep on a road near a welcoming billboard to Chinese President Xi Jinping Friday, January 17, 2020, in Naypyitaw, Myanmar. China's President Xi Jinping was heading to Myanmar on Friday for a state visit likely to deepen the countries' already close bilateral relations at a critical time. (Photo by Aung Shine Oo/AP Photo) 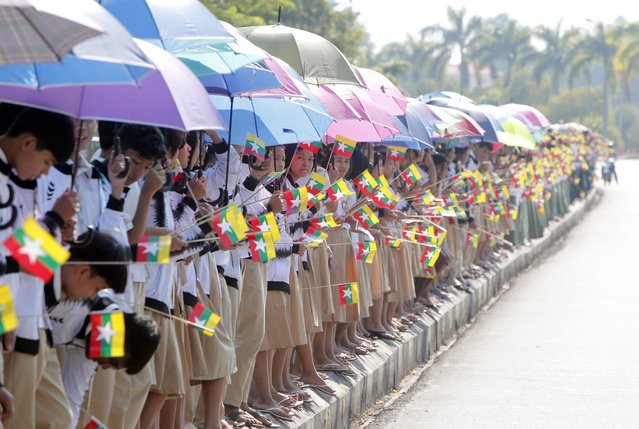 Supporters holding national flags as they welcome leader Aung San Suu Kyi back from the Netherlands Saturday, December 14, 2019, outside the airport in Naypyitaw, Myanmar. In the Hague on Wednesday, December 11, 2019, Suu Kyi denied that Myanmar's armed forces committed genocide, telling the United Nation's top court that the mass exodus of Rohingya people from the country she leads was the unfortunate result of a battle with insurgents. (Photo by Aung Shine Oo/AP Photo) 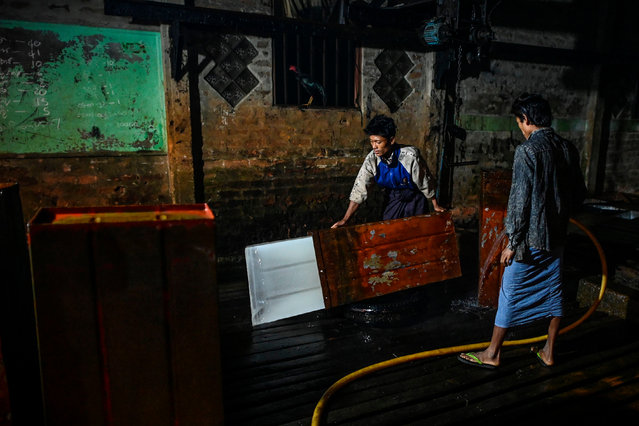 Labourers work at a ice-making workshop in Mawgyun of Irrawaddy region on December 7, 2019. (Photo by Ye Aung Thu/AFP Photo) 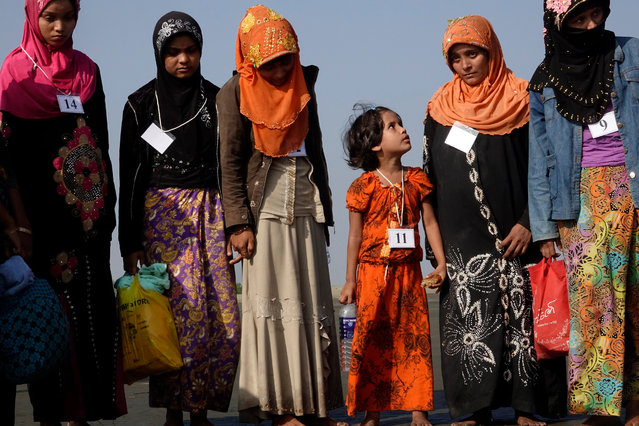 A group of 17 Muslim migrants arrive at the Thae Chaung village in Sittwe, Rakhine State, Western Myanmar, 13 January 2020. 17 people, including children and women believed to have fled the state of Rakhine and Bangladesh, were arrested on 15 December 2019 as they arrived on the shores of Kawthaung District. They were sent back to Sittwe by Navy ships. Authorities arranged temporary shelter for the group at the Sai Tha Mar Gyi village near Sittwe. (Photo by Nyunt Win/EPA/EFE) 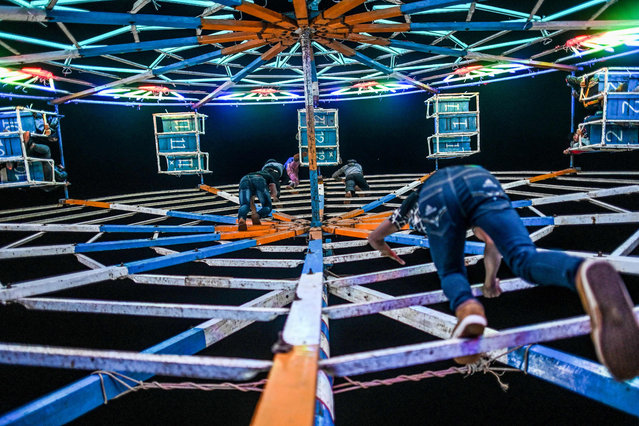 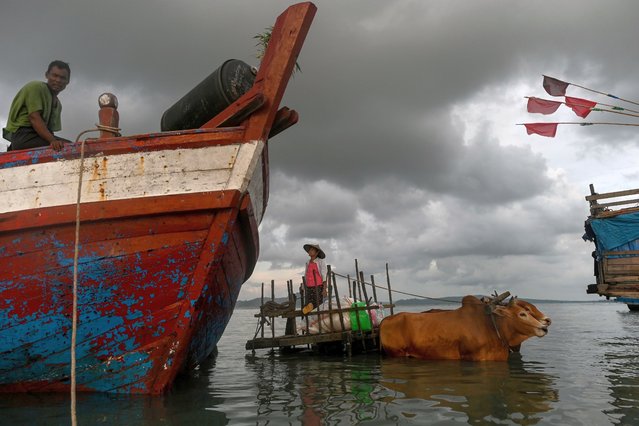 This photo taken on October 1, 2019, shows people using a bull cart to transport goods from a boat at Japanma jetty in Kyaukphyu, Rakhine State. (Photo by Ye Aung Thu/AFP Photo) 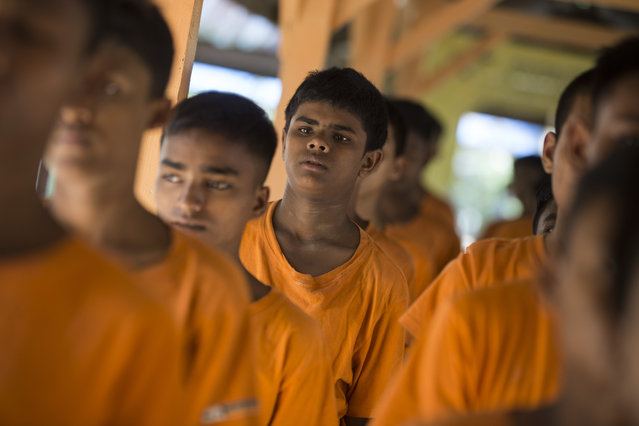 Some Rohingya boys queue for lunch at Hnget Awe San Youth Rehabilitation Center in Kawhmu township of Yangon, Myanmar, on October 20, 2019. 35 out of all 564 trainees at the center are Rohingya Muslims from Rakhine state who were convicted of attempt to travel to Myanmars largest city Yangon and then to Malaysia without having any valid documents. (Photo by AungNaingSoe/Anadolu Agency via Getty Images) 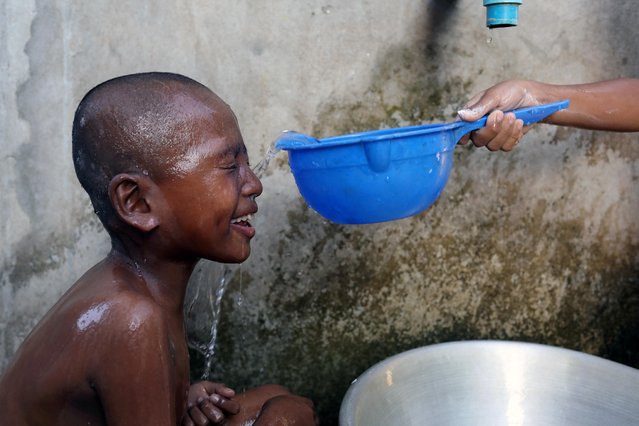 A child takes a bath in National League for Democracy's AIDS center in Yangon, Myanmar, November 27, 2019. (Photo by Ann Wang/Reuters) 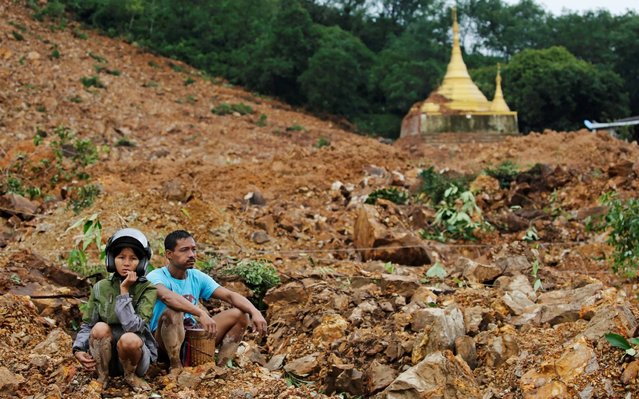 Residents and survivors sit at the site of a landslide in Mottama, Mon state, Myanmar, August 10, 2019. (Photo by Ann Wang/Reuters) 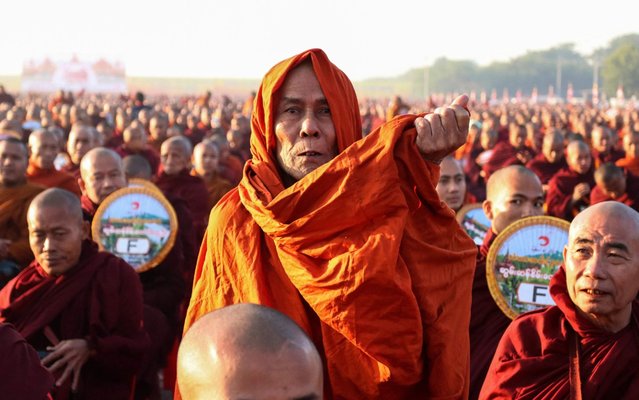 Monks line up for alms during the alms-giving ceremony to 30,000 monks organize by the region government of Mandalay affiliated with Dhammakaya Foundation at Chanmyathazi Airport in Mandalay on December 8, 2019. Thirty-thousand monks assembled in the early morning chill of Mandalay for a spectacular alms-giving event involving a controversial mega-temple under scrutiny across the border in Thailand. (Photo by Kyaw Zay Win/AFP Photo) 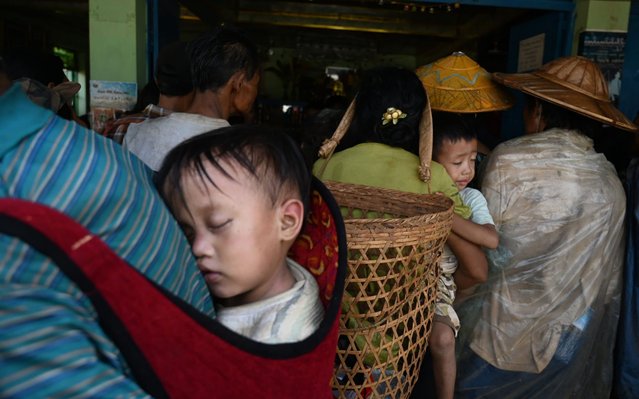 This photo taken on August 25, 2019 shows children being carried as people, affected by clashes between the military and ethnic rebel groups, wait to receive supplies from local civil society organisations in Man Lwal village, outside Kutkai in Shan State. Local civil society organisations say more than 2,000 people have been displaced as residents caught in the middle seek safety in nearby monasteries. (Photo by Ye Aung Thu/AFP Photo) 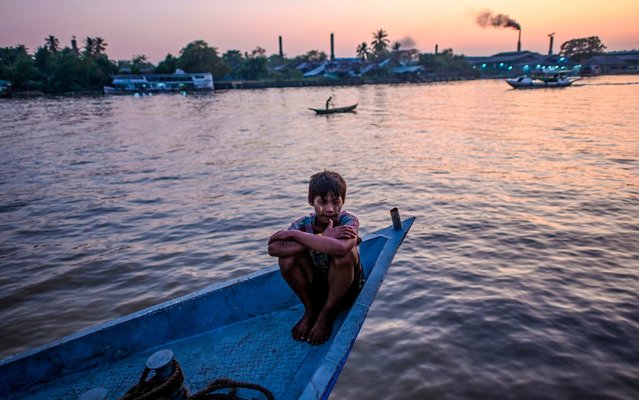 This photo taken on December 6, 2019 shows a boy sitting on a boat at a pier in Mawgyun of Irrawaddy region. (Photo by Ye Aung Thu/AFP Photo) 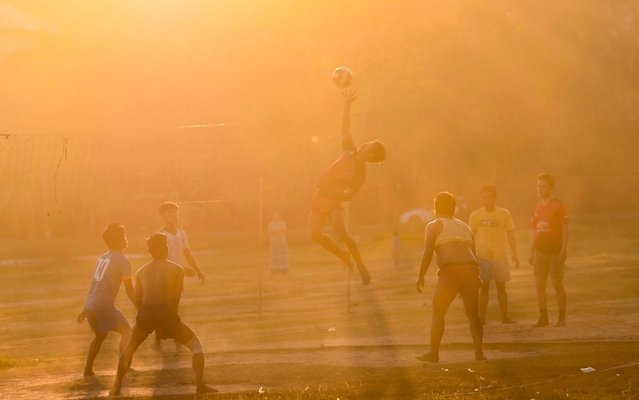 People play volleyball during sunset at a ground in Naypyidaw on January 17, 2020. (Photo by Ye Aung Thu/AFP Photo) 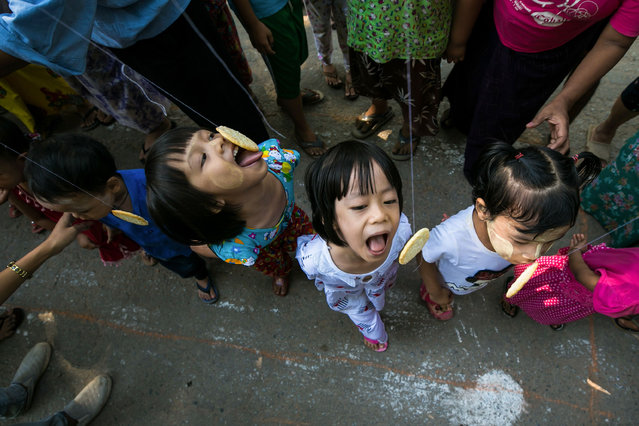