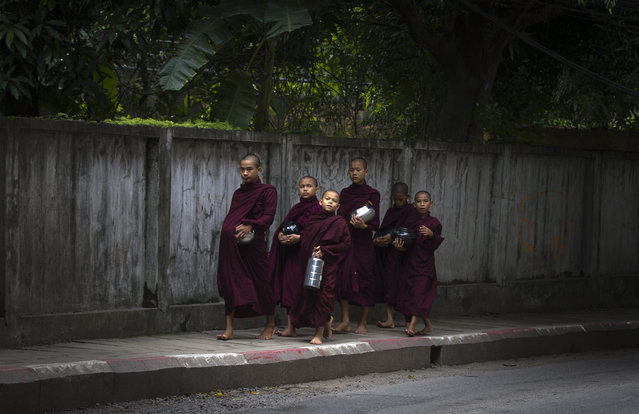 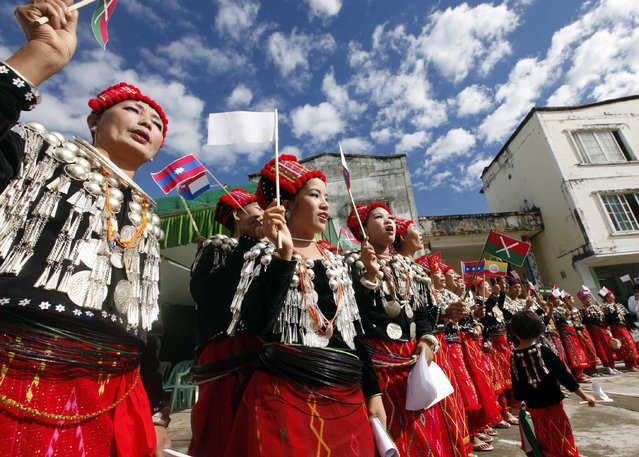 Clad in Kachin traditional costumes, women dance with miniature flags of ethnic rebels as they welcome other ethnic rebels during a nationwide ceasefire conference at the headquarters of KIA in Laiza, a border town of China and Myanmar, Kachin State, Myanmar, Tuesday, October 29, 2013. From 1961 until 1994, the KIA fought a grueling and inconclusive war against the Burmese junta for independence, but now the groups goal is for autonomy within a federal union. The Kachins are a coalition of six tribes whose homeland encompasses territory in Yunnan, China and Northeast India, in addition to Kachin State in Burma. (Photo by Khin Maung Win/AP Photo) 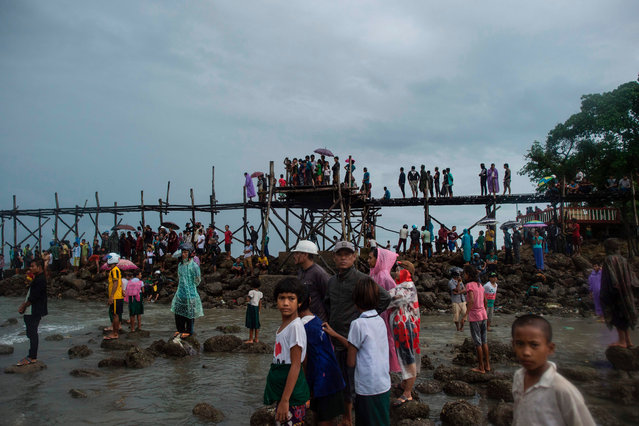 People watch Myanmar military members carrying dead bodies at Sanhlan village on June 8, 2017. Hundreds of people gathered solemnly on a beach in southern Myanmar awaiting news of their loved ones as rescuers worked to pull bodies from the Andaman Sea after a military plane crashed with more than 120 people on board. (Photo by Ye Aung Thu/AFP Photo) 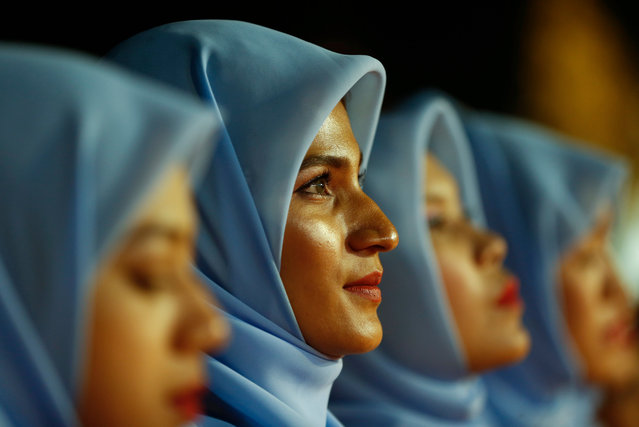 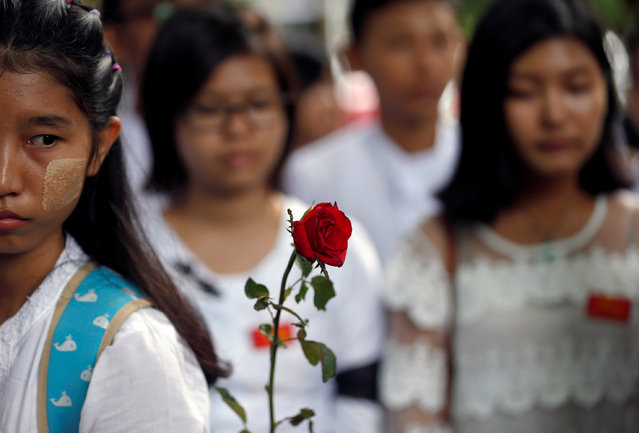 Students attend a protest, to mark the 55rd anniversary of the military's suppression of student protests in 1962, the same year when late General Ne Win seized power to usher in 49 years of authoritarian army rule in the former Burma, with dozens of students killed when Ne Win's four-month-old junta crushed the 1962 demonstrations and used dynamite to blow up the students' union building of Yangon University, in Yangon University, Yangon, Myanmar July 7, 2017. (Photo by Soe Zeya Tun/Reuters) 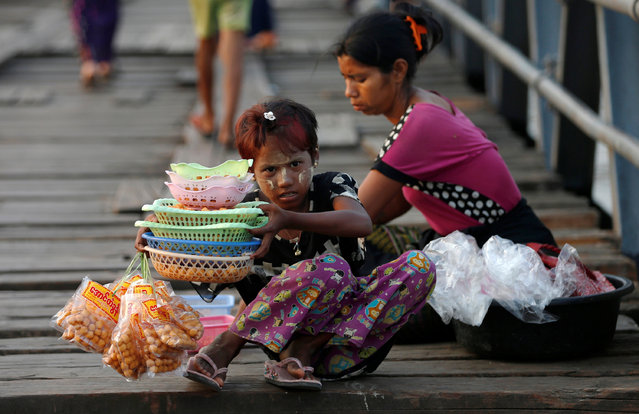 A family sells seagulls food to visitors on bank of the Yangon River in Yangon, Myanmar April 27, 2017. (Photo by Soe Zeya Tun/Reuters) 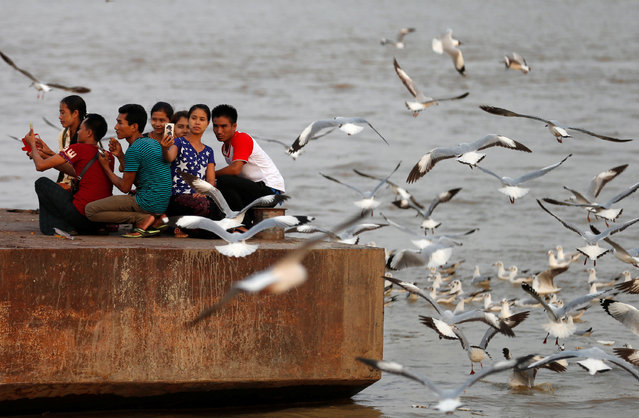 People take a selfie as the feed seagulls on the bank of the Yangon River in Yangon, Myanmar April 27, 2017. (Photo by Soe Zeya Tun/Reuters) 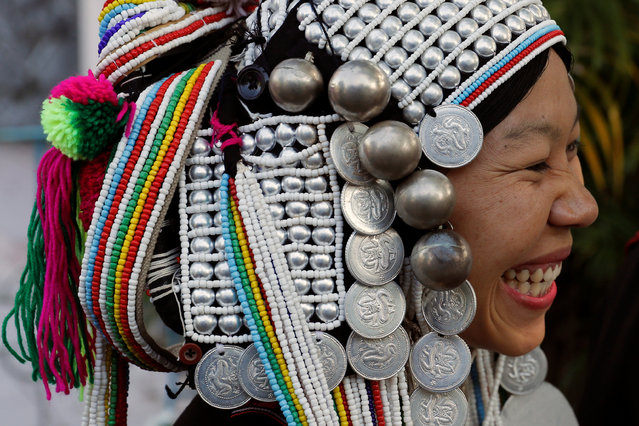 A Catholic woman from Shan state smiles as Catholics from all over Myanmar gather to welcome Pope Francis, before his visit to Yangon, Myanmar November 26, 2017. (Photo by Jorge Silva/Reuters) 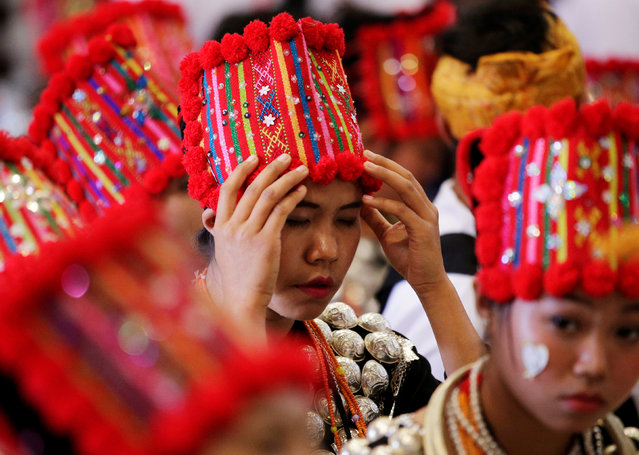 A woman adjusts her headwear as she waits for Pope Francis to arrive to lead a Mass at St Mary's Cathedral in Yangon, Myanmar November 30, 2017. (Photo by Max Rossi/Reuters) 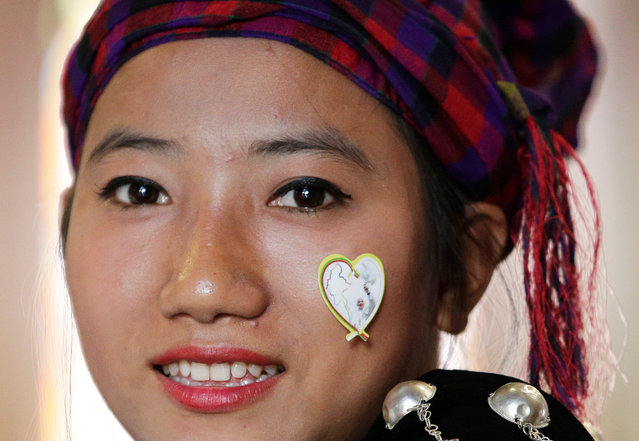 A woman sports a sticker commemorating Pope Francis's visit as she waits for the pope to arrive to lead a Mass at St Mary's Cathedral in Yangon, Myanmar November 30, 2017. (Photo by Max Rossi/Reuters) 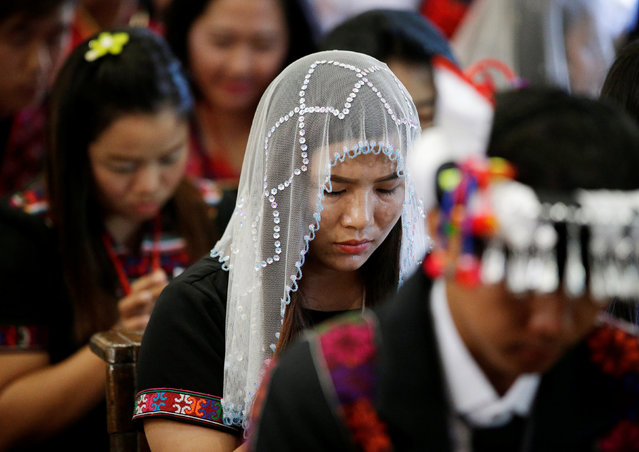 People wait for Pope Francis to arrive to lead a Mass at St Mary's Cathedral in Yangon, Myanmar November 30, 2017. (Photo by Max Rossi/Reuters) 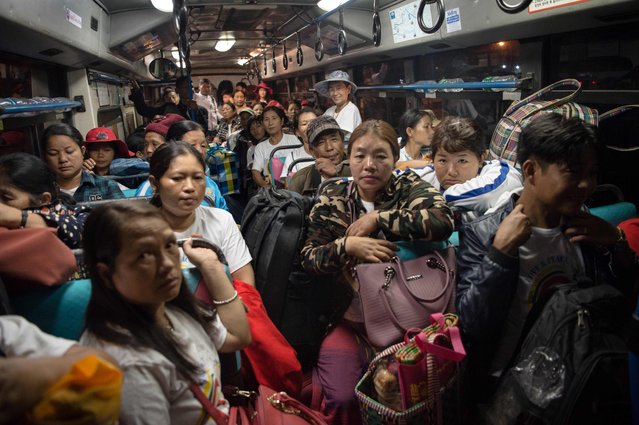 Ethnic Kachin Catholic faithful take buses to a Catholic church after arriving at the railway station in Yangon on November 25, 2017 ahead of the arrival of Pope Francis. Pope Francis arrives in Myanmar on November 27, locked in the headwinds of global outcry over the country's treatment of its minority Muslim Rohingya, some 620,000 of whom have been driven out of Rakhine state since August. (Photo by Ye Aung Thu/AFP Photo) 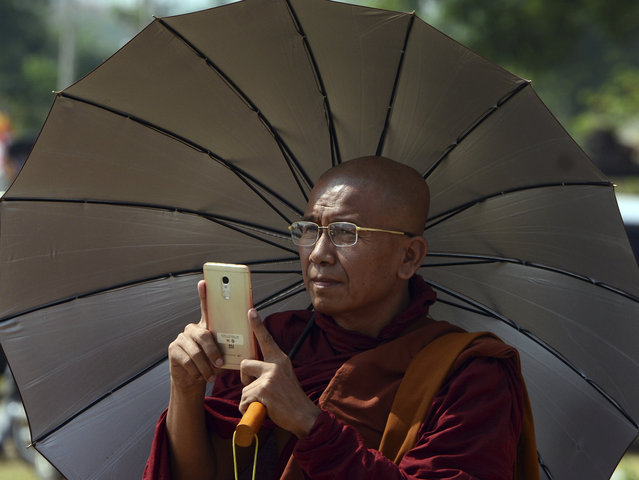 A member of a Myanmar's ultra-nationalist Buddhist group takes photos with his mobile phone during a protest rally in Nayptitaw, Myanmar, Saturday, May 20, 2017, against Religious Minister Thura Aung Ko for his intervention in a case in which Myanmar Now news chief reporter Swe Win leveled allegations against Wirathu, a high-profile leader of the Myanmar Buddhist organization known as Ma Ba Tha, after the monk praised the assassination in January of prominent Muslim lawyer Ko Ni who was a legal advisor to Aung San Suu Kyi's government. Tensions between Buddhist and Muslims has spread across Myanmar since violent conflict broke out between ethnic Rakhine Buddhists and Muslim Rohingya in 2012. (Photo by Aung Shine Oo/AP Photo) 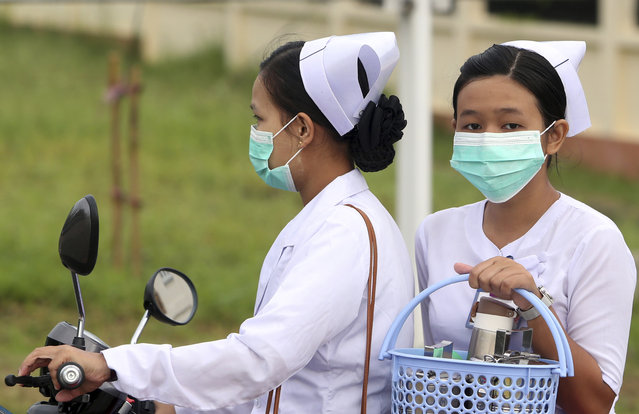 Nurses cover their faces with masks to protect from the spread of the swine flu outside the Naypyitaw hospital, Tuesday, July 25, 2017, in Naypyitaw, Myanmar. Public health officials in Myanmar say that H1N1 flu, also known as swine flu, has killed three people out of 13 confirmed cases of the infection. (Photo by Aung Shine Oo/AP Photo) 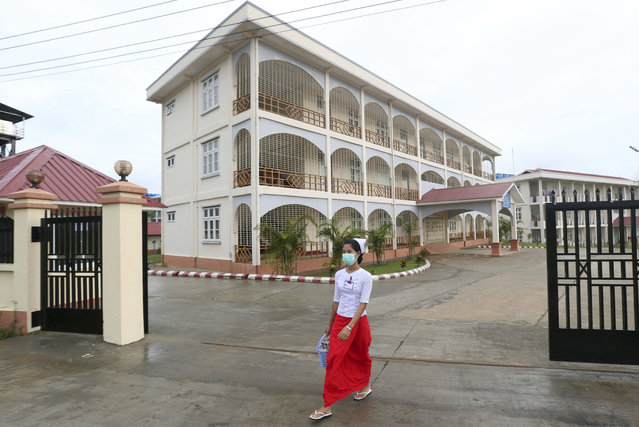 A nurse wears a mask to protect herself form the swine flu virus outside a nursing training school, Tuesday, July 25, 2017, in Naypyitaw, Myanmar. (Photo by Aung Shine Oo/AP Photo) 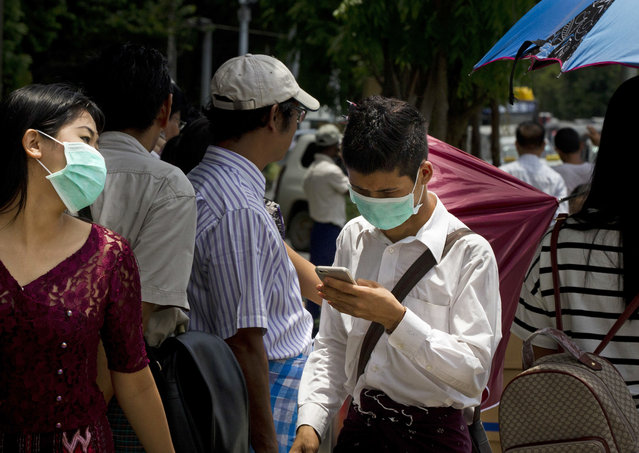 People wear masks to protect themselves against the swine flu on a main street, Tuesday, July 25, 2017, in Yangon, Myanmar. (Photo by Aung Shine Oo/AP Photo) 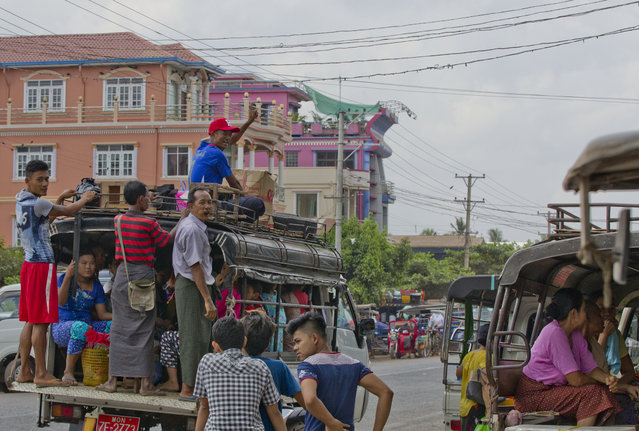 In this April 9, 2017 photo, Myint Naing sitting on a roof of a public transport vehicle, waves at Mudon, Mon State, Myanmar. Myint desperately wants to work, but he's simply not able. Muscles on the right side of his body were weakened by a stroke-like attack in Indonesia. (Photo by Thein Zaw/AP Photo) 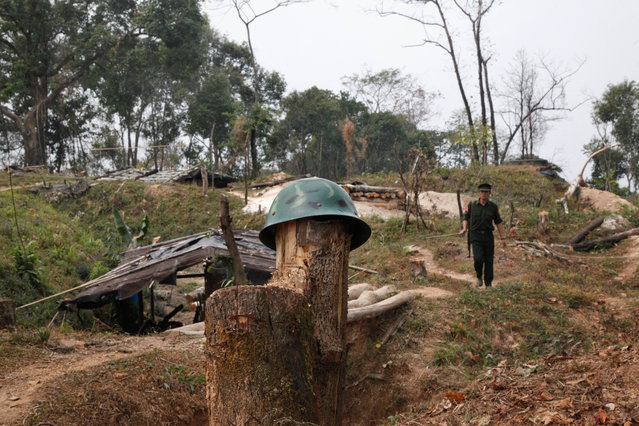 In this March 17, 2018 photo, a Kachin Independence Army rebel walks in frontline at Hpalap mountain controlled by the Kachin rebels in northern Kachin state, Myanmar. The Kachin Independence Army along with other ethnic armed groups have been fighting against Myanmar army for greater autonomy. The fighting between the Kachin army and the government military resumed in 2011, ending the 17 years of ceasefire agreement. (Photo by Esther Htusan/AP Photo) 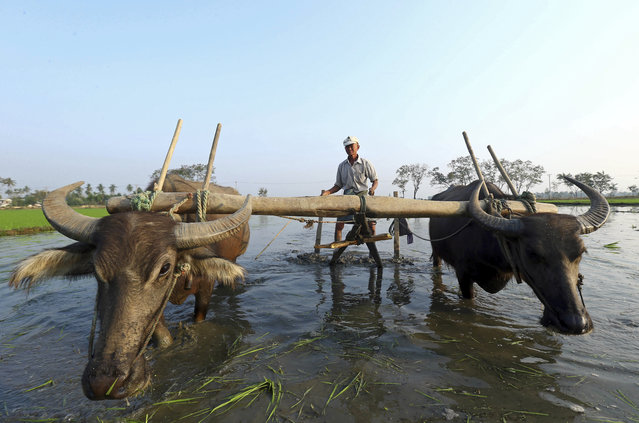 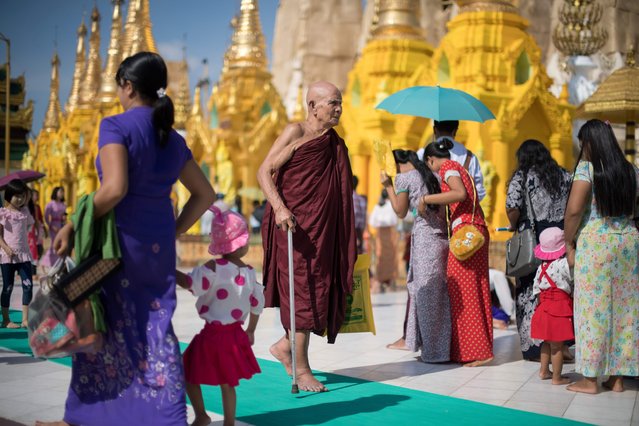 A Buddhist monk walks in the courtyard surrounding the Shwedagon Pagoda, Myanmar's most sacred Buddhist temple, in Yangon on November 26, 2017. Pope Francis arrives in Myanmar on November 27 for the first ever papal visit to the Buddhist-majority nation, whose estimated 700,000 Catholics represent just over one percent of the population. (Photo by Roberto Schmidt/AFP Photo) 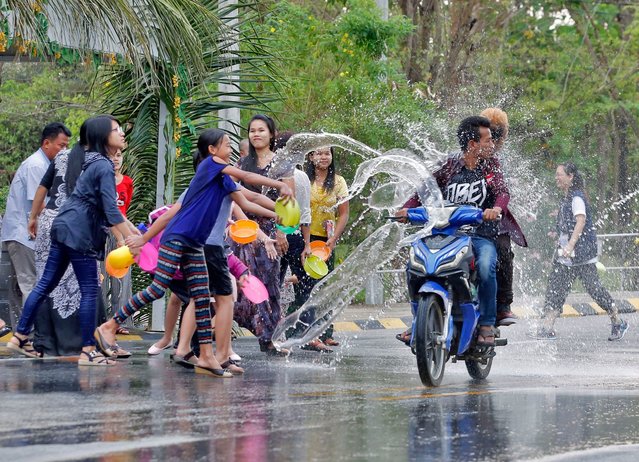 People participate in the first day of Thingyan Water Festival in Naypyitaw, Myanmar on April 13, 2018. The annual water festival, known as Thingyan, features large groups of people congregating to celebrate the by splashing water and throwing powder at each other's faces as a symbol of cleansing and washing away the sins from the old year. It marks the start of the traditional New Year and is similarly celebrated in countries such as Myanmar, Thailand, Laos and Cambodia. (Photo by Hein Htet/EPA/EFE/Rex Features/Shutterstock) 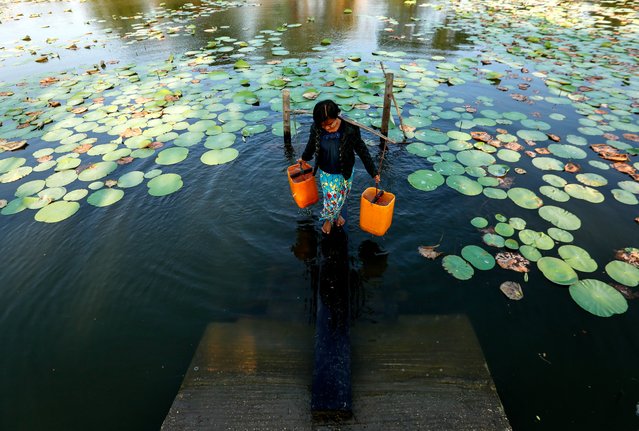 A Young girl loads a pair of water buckets on her shoulder as she collects fresh water from a pond at Dala township that has no underground fresh water and with the township water supply system very limited, residents mostly rely on earthen rainwater ponds, the outskirt of Yangon, Myanmar, 20 March 2018. World Water Day is held annually on 22 March as a means of focusing attention on the importance of freshwater and advocating for the sustainable management of freshwater resources. The theme for World Water Day 2018 is “Nature for Water”, exploring nature-based solutions to the water challenges we face in the 21st century. (Photo by Lynn Bo Bo/EPA/EFE/Rex Features/Shutterstock)
Edit Del
27 Apr 2018 00:03:00, post received 0 comments
Publication archive:
←   →
Popular tags:
All tags
Last searches: