Fact “Days of Night – Nights of Day”
Elena Chernyshova's vision of Norilsk, Russia, the northernmost city in the world, is a series of surprises by which she extracts otherworldly beauty from ugly realities. Norilsk ranks as the seventh most polluted city on earth, and its origins are dark: It was built in the 1920s and '30s on the backs and bones of gulag prisoners. Now it is a company town that mines and smelts the world's biggest haul of nickel and palladium, 24/7. The average temperature is 14 degrees Fahrenheit and winter lows get to –67 F; polar night – no sunlight – sets in for two months each year; and melting permafrost is destabilizing urban structures. Norilsk is closed – you have to be invited to go – and can only be accessed by air and unfrozen waterways. Chernyshova is a Russian documentary photographer based in France. Her “Days of Night – Nights of Day” exhibition opened January 5 and is currently on view as part of the ongoing Half King Photo Series in New York City. 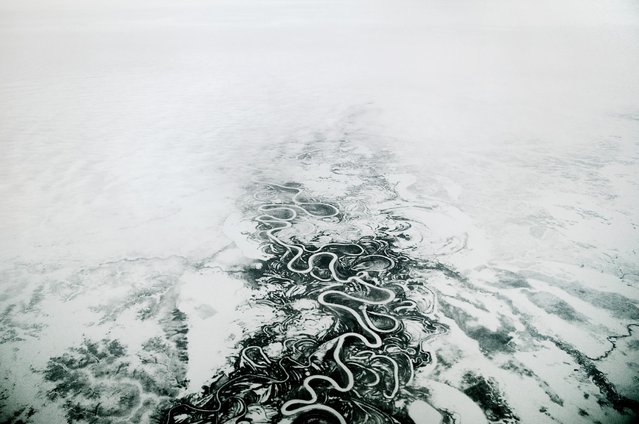 2013. Seen from an airplane, a waterway snakes its way through the frozen tundra. At 400 kilometers above the Arctic Circle, Norilsk, Russia, is not accessible by road or rail, only by air and waterways when they're not frozen. The rest of the world is referred to as "the continent". (Photo by Elena Chernyshova) 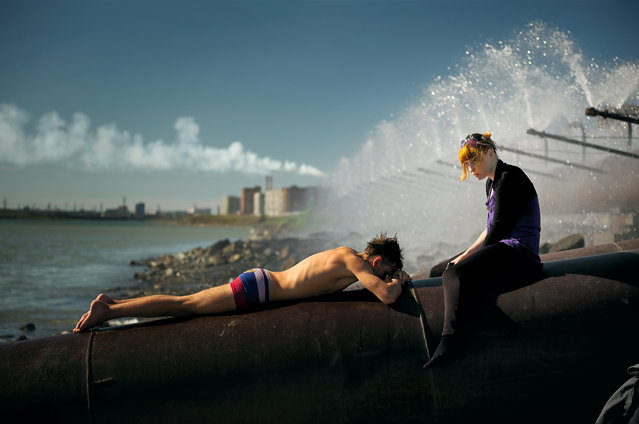 2012. Two young people sit on an industrial pipe beside an artificial lake in summer. Many young Norilskers want to work on "the mainland" (Russia). "We can't even leave for the weekend to go to another city to get some new ideas and meet other people", one young person says. (Photo by Elena Chernyshova) 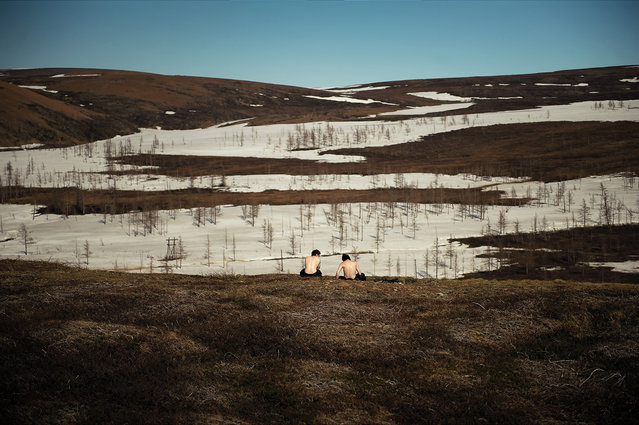 April 2012. Two young men sit on a hillock overlooking a landscape still partially covered in snow. After spending nine months in confined spaces, Norilsk inhabitants like to escape to the tundra when the weather turns nice. (Photo by Elena Chernyshova)

2013. A woman is visible through a narrow passageway between two buildings. Norilsk's urban spaces were designed to shorten distances around large developments and give residents maximum protection from arctic winds. (Photo by Elena Chernyshova) 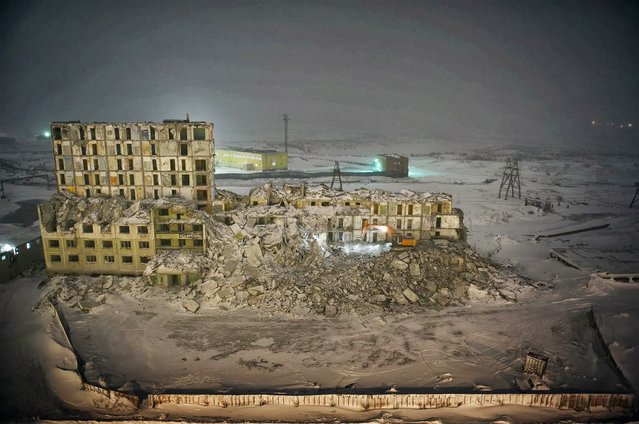 2012. A bulldozer demolishes a building. Norilsk is facing an infrastructure crisis due to melting permafrost, on which most of its buildings were set. The thaw is caused by the leeching of sewage and hot water into the ground, urban development in general, global warming and pollution. (Photo by Elena Chernyshova) 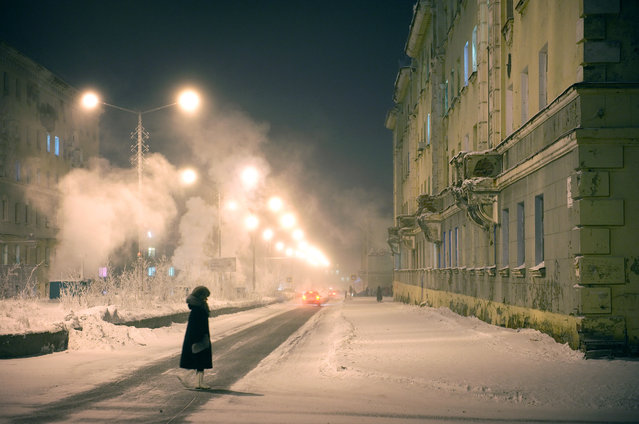 2012. A woman crosses the street on a freezing night. Norilsk is one of the coldest cities in the world: Winter temperatures average -22 F. It is covered in snow for eight to nine months of the year. It receives about 10 tons of snow per inhabitant and gets snowstorms about 130 days a year. (Photo by Elena Chernyshova) 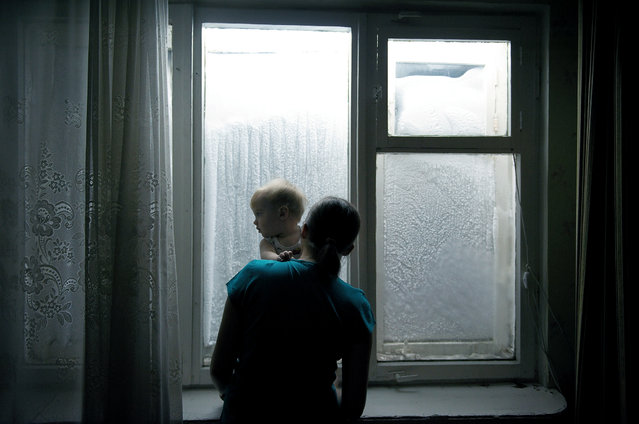 2012. A woman holds her child as they look out at a wall of snow in front of their apartment block. Each year, around 10 tons of snow per inhabitant fall on the city. About 280 days of the year have freezing temperatures. (Photo by Elena Chernyshova) 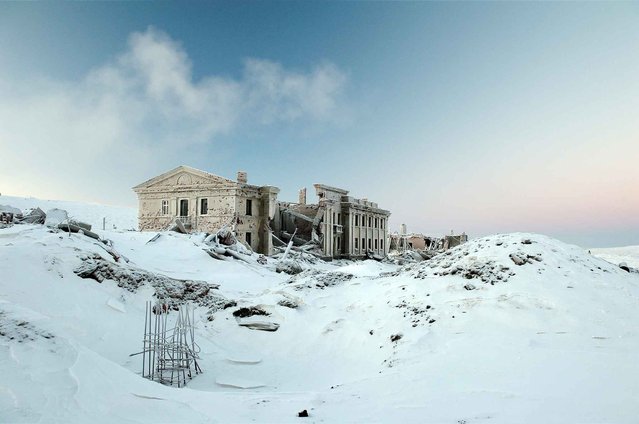 2012. Ruins of the House of Culture, one of the oldest buildings in Norilsk. In 1936, the Soviet Union began building the city and a metallurgical complex around it. Many of the mines and factories, and most of the contemporary city, were built by 600,000 forced gulag laborers, many of whom died. (Photo by Elena Chernyshova) 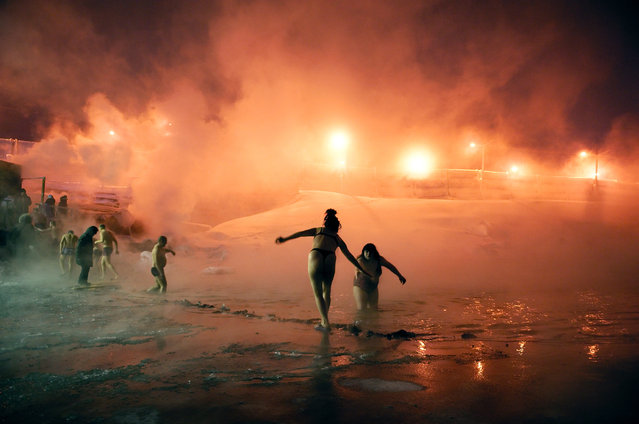 2013. Members of the Walrus Club enjoy a dip in an icy lake. A popular pastime is to take a dip in holes cut into the ice and then retire to a "banya" (sauna) that is heated with steam from the nearby power plant. (Photo by Elena Chernyshova) 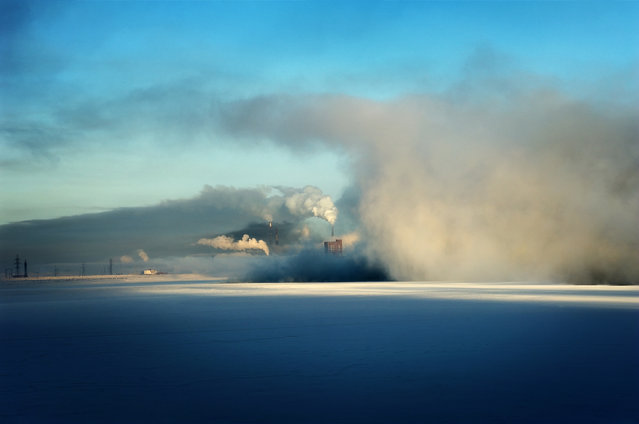 2012. Smokestacks and an industrial building. Norilks was founded in the 1920s as the center for the Norilsk Corrective Labor Camp. It was given town status in 1953 as the gulag system ended. Today, the city's main employer is MMC Norilsk Nickel, the world's leading producer of nickel and palladium. In 2001, the city was closed to all non-Russians. (Photo by Elena Chernyshova) 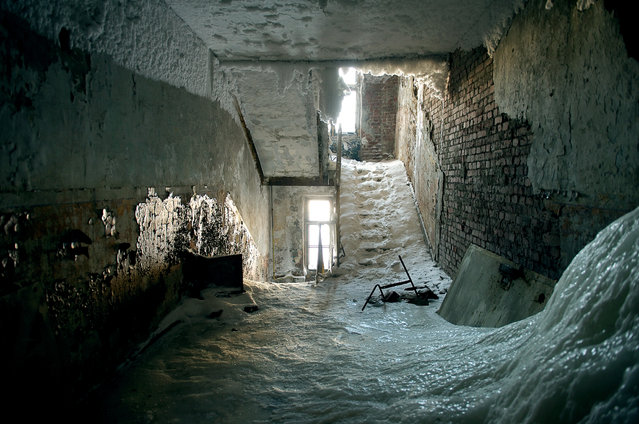 2011. A building in Norilsk sits abandoned after a damaged pipe filled it with water. Despite its prosperity, Norilsk faces a huge maintenance problem. The majority of buildings were constructed on pilings, which are now shifting due to melting permafrost. (Photo by Elena Chernyshova)
Edit Del
10 Jan 2016 08:03:00, post received 0 comments
Publication archive:
←   →
Popular tags:
All tags
Last searches: