Fact Doomsday Vault
“The Svalbard Global Seed Vault is a secure seed bank on the Norwegian island of Spitsbergen near Longyearbyen in the remote Arctic Svalbard archipelago, about 1,300 kilometres (810 mi) from the North Pole. Conservationist Cary Fowler, in association with the Consultative Group on International Agricultural Research (CGIAR), started the vault to preserve a wide variety of plant seeds that are duplicate samples, or “spare” copies, of seeds held in gene banks worldwide. The seed vault is an attempt to insure against the loss of seeds in other genebanks during large-scale regional or global crises. The seed vault is managed under terms spelled out in a tripartite agreement between the Norwegian government, the Global Crop Diversity Trust (GCDT) and the Nordic Genetic Resource Center (NordGen). The Norwegian government entirely funded the vault's approximately NOK 45 million (US$9 million) construction. Storing seeds in the vault is free to end users, with Norway and the Global Crop Diversity Trust paying for operational costs. Primary funding for the Trust comes from such organisations as the Bill & Melinda Gates Foundation and from various governments worldwide”. – Wikipedia 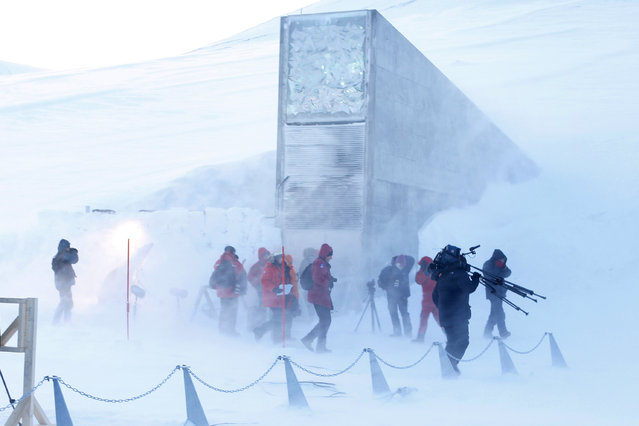 Journalists and cameramen walk under a gust of cold wind near the entrance of the Svalbard Global Seed Vault that was officially opened near Longyearbyen on February 26, 2008. A vault carved into the Arctic permafrost and filled with samples of the world's most important seeds was inaugurated Tuesday, providing a Noah's Ark of food crops in the event of a global catastrophe. (Photo by Hakon Mosvold Larsen/AFP Photo) 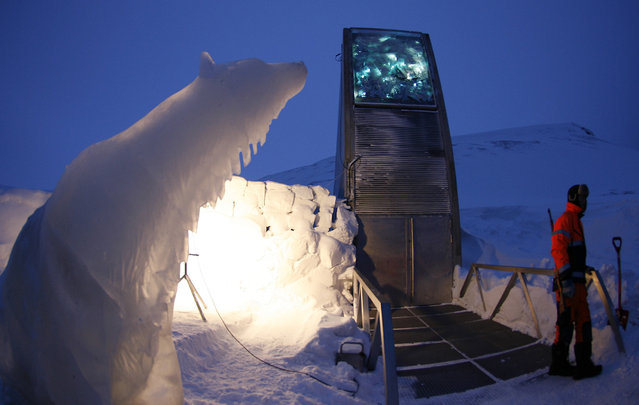 A polar bear sculpture made of ice stands outside the Global Seed Vault in Longyearbyen February 25, 2008. (Photo by Bob Strong/Reuters) 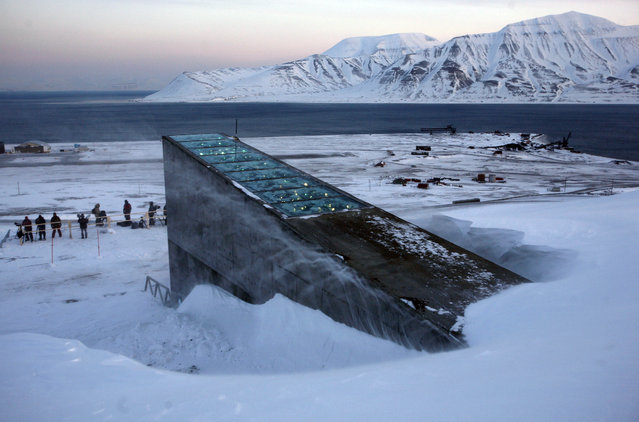 Snow blows off the Svalbard Global Seed Vault before being inaugurated at sunrise, Tuesday, February 26, 2008. (Photo by John McConnico/AP Photo) 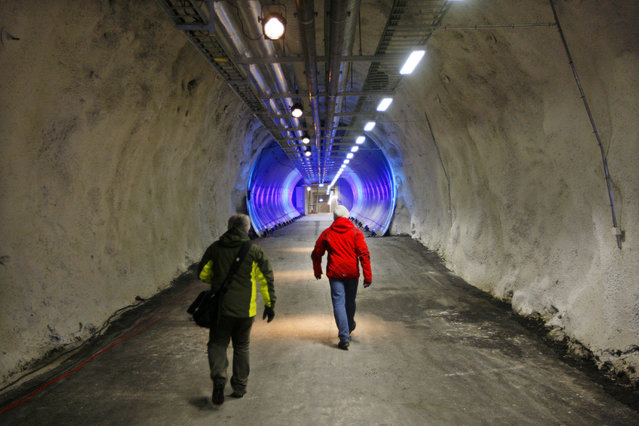 People walk into a seed vault on February 24, 2008 near Longyabyen. (Photo by Hakon Mosvold Larsen/AFP Photo) 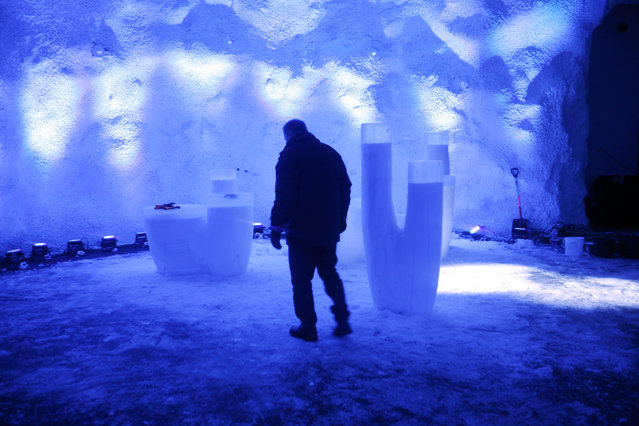 Magnus Bredeli-Pveiten, project manager for the Svalbard Global Seed Vault Monday February 25, 2008 is seen at the vault in Longyearbyen, Norway. A “doomsday” vault built to withstand an earthquake or nuclear strike is ready to open deep in the permafrost of an Arctic mountain, where it will protect millions of agriculture seeds from man-made and natural disasters. The vault is to be officially inaugurated on Tuesday, less than year after crews started drilling in Norway's Svalbard archipelago, about 1,000 kilometers (620 miles) from the North Pole. The vault has the capacity to store 4.5 million seed samples from around the globe, shielding them from climate change, wars, natural disasters and other threats. (Photo by John McConnico/AP Photo) 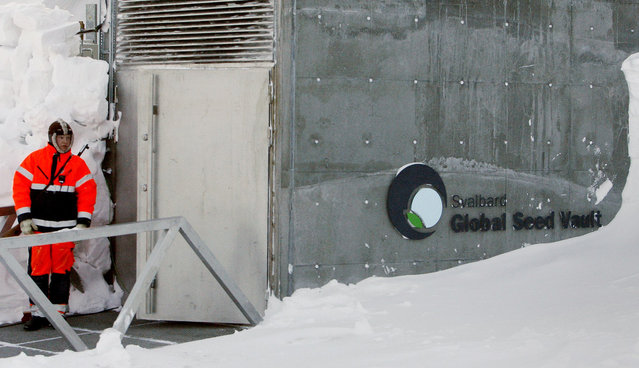 A guard stands watch outside the Global Seed Vault before the opening ceremony in Longyearbyen February 26, 2008. (Photo by Bob Strong/Reuters) 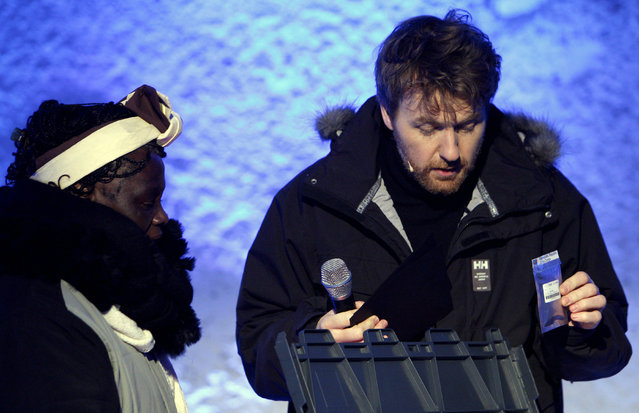 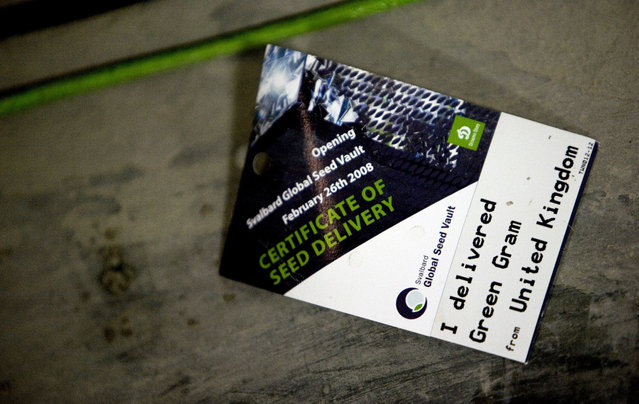 A certificate of seed delivery from the United Kingdom is pictured during the opening of the Global Seed Vault on February 26, 2008 in Longyearbyen. (Photo by Daniel Sannum Lauten/AFP Photo) 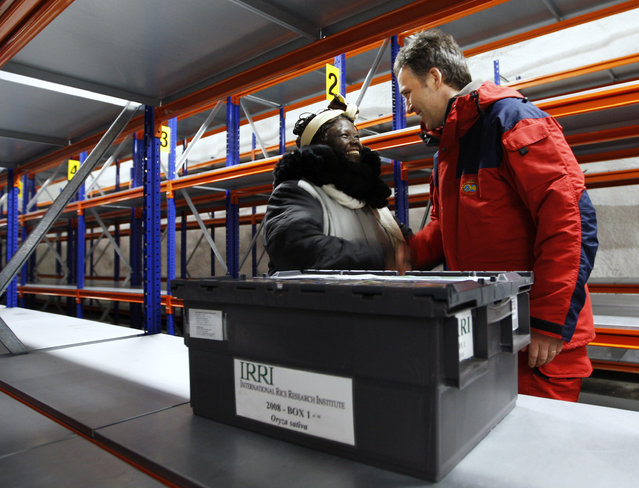 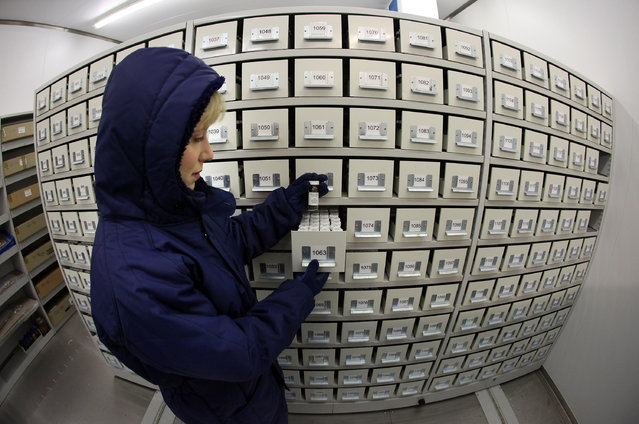 Sarah Gattiker stores the 24,200th species of seed in the vault at Kew's Millennium Seed Bank, which now holds 10 percent of the world's wild plant species, at Wakehurst Place on October 15, 2009 near Haywards Heath, Sussex, England. The 24,200th seed species is a pink, wild banana from China which is an important staple for wild Asian elephants. The seed bank intends to collect and store a quarter of the world's plant species by 2020 to support conservation and safeguard biodiversity. The bank is the largest wild seed bank in the world holding 3.5 billion seeds from around the world in its vaults, storing them at -20 degrees Celsius to preserve them for hundreds of years. (Photo by Oli Scarff/Getty Images)
Edit Del
24 Sep 2015 08:00:00, post received 0 comments
Publication archive:
←   →
Popular tags:
All tags
Last searches: