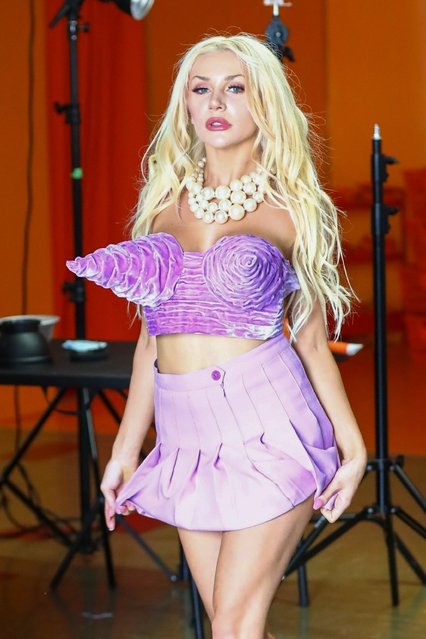 American media personality and singer Courtney Stodden shoots for the album artwork to her latest single PLEASURE, coming out on May 1st in Los Angeles, CA. on April 24, 2021. (Photo by Backgrid USA) 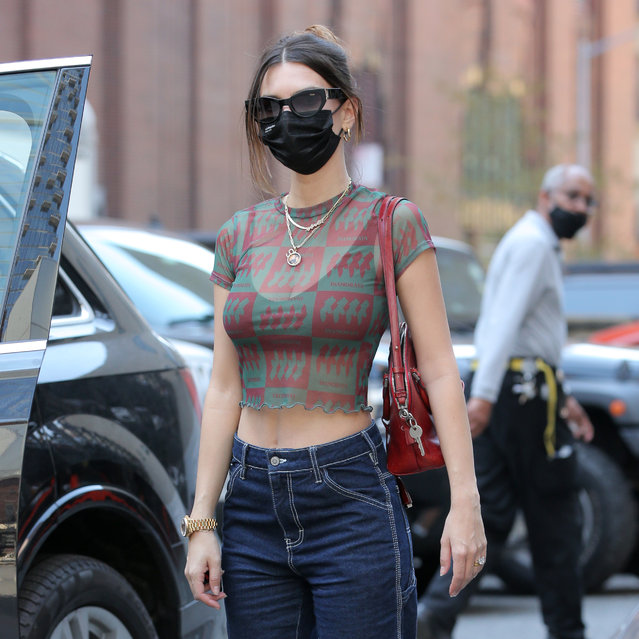 American model and actress Emily Ratajkowski is seen in a sheer Inamorata top with black bra, jeans, red handbag and gold watch in New York City on April 20, 2021. Emily valets her car with her dog Colombo. (Photo by Christopher Peterson/Splash News and Pictures) 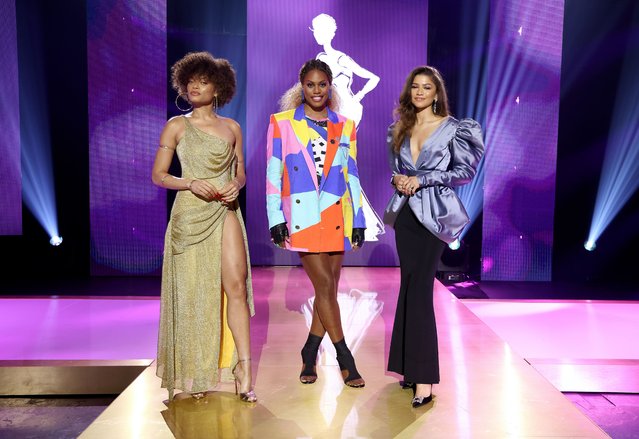 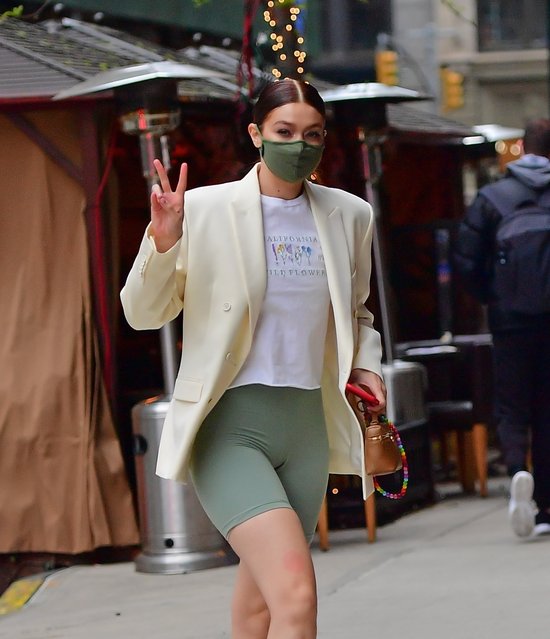 American model Gigi Hadid flashes the peace sign as she arrives at her apartment in New York on April 21, 2021. (Photo by Backgrid USA) 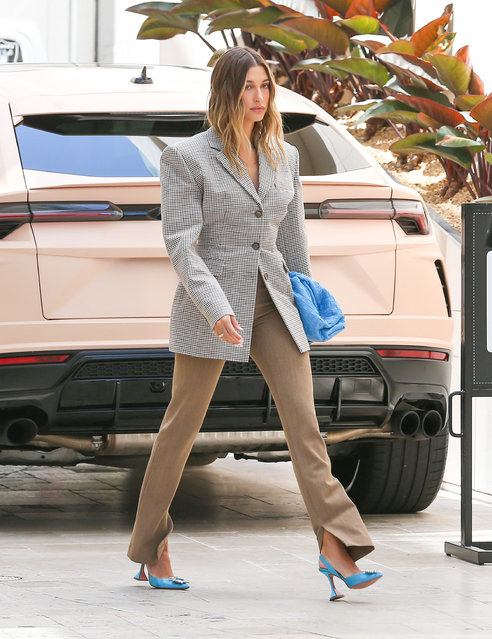 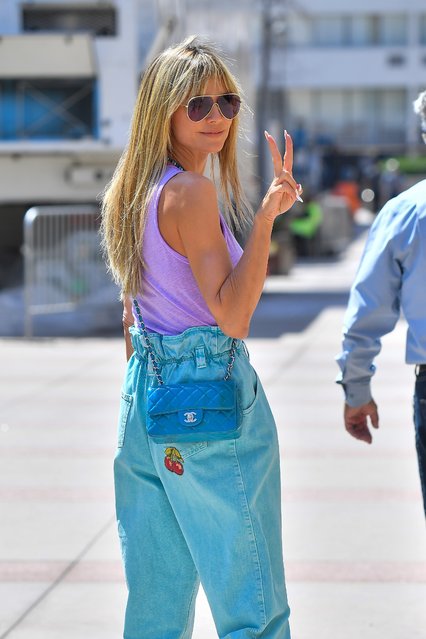 German-American model and television host Heidi Klum pairs a chanel purse with a very summery look heading to a studio in Pasadena on April 17, 2021. (Photo by Snorlax/The Mega Agency] 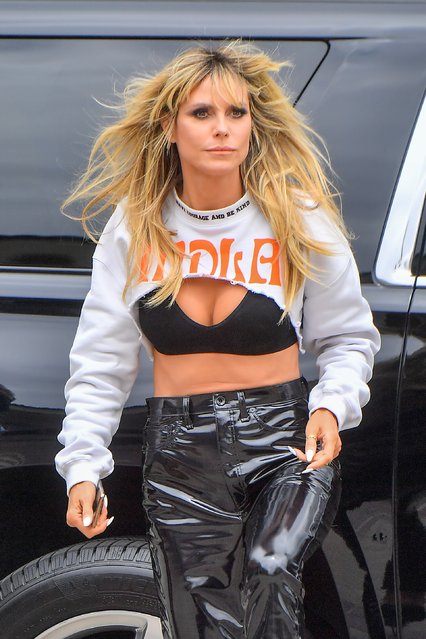 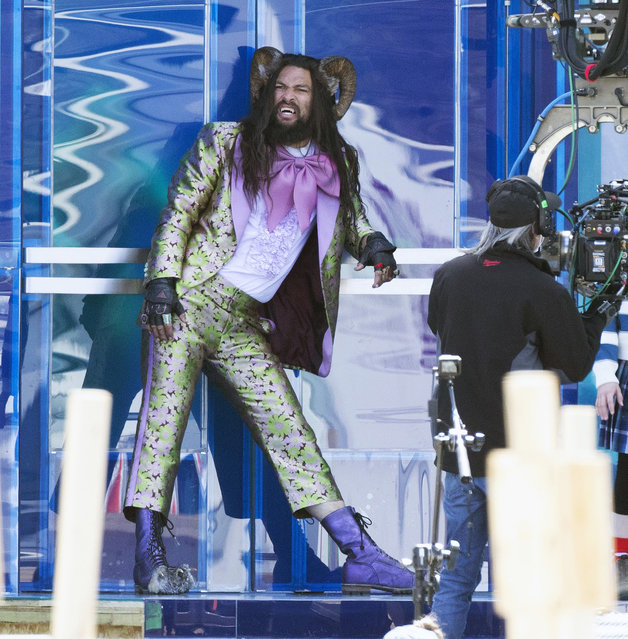 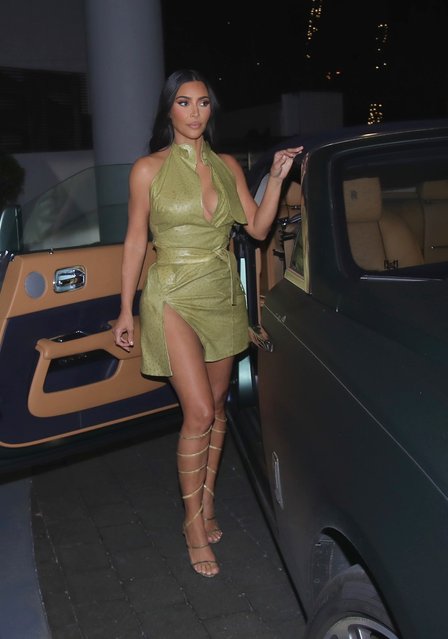 Kim Kardashian is all smiles as she parties with friends in Miami for the opening of the Goodtime Hotel in South Beach on April 17, 2021. Kim was spotted inside with owner David Grumman who she surprised for the event and then later headed to Papi Steak and her luxury hotel. She was in a custom Lamborghini and Rolls Royce with Jonathan Cheban and longtime friends Stephanie Sheppard and Simon Huck. The friends all had a laugh as they waited for their cars to head to the event. The 40-year-old reality TV bombshell, who is in the process of divorcing her third husband Kanye West, cut a typically glamorous figure on her latest night out. She slid her iconic hourglass frame into a glimmering golden peekaboo dress that showed off her cleavage to full advantage. (Photo by The Mega Agency) 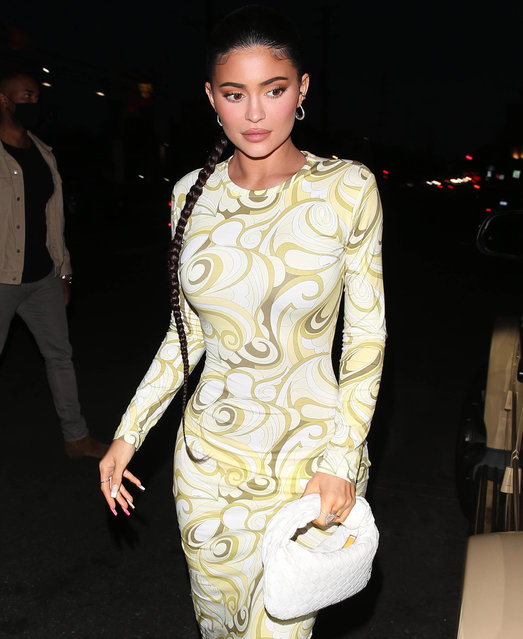 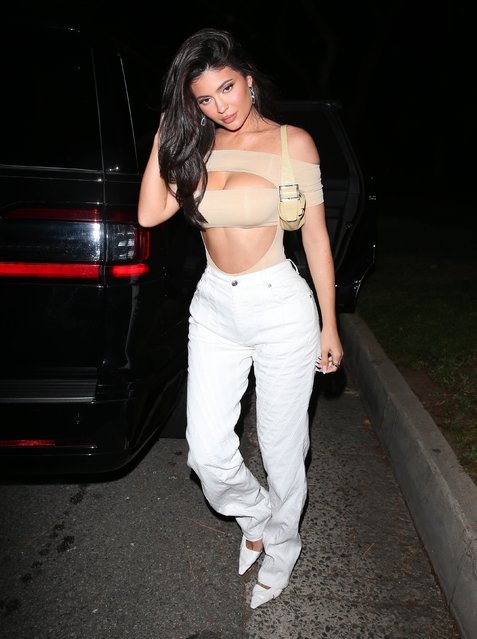 Billionaire Cosmetics mogul, Kylie Jenner flaunts her curvy physique while heading to dinner in Beverly Hills on April 24, 2021. Kylie is a true trendsetter as she flawlessly pairs a beige middle cutout bodysuit with white stacked jeans and white heels. (Photo by Backgrid USA) 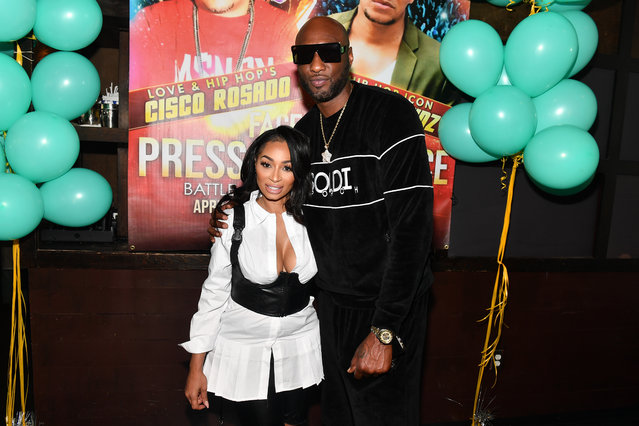 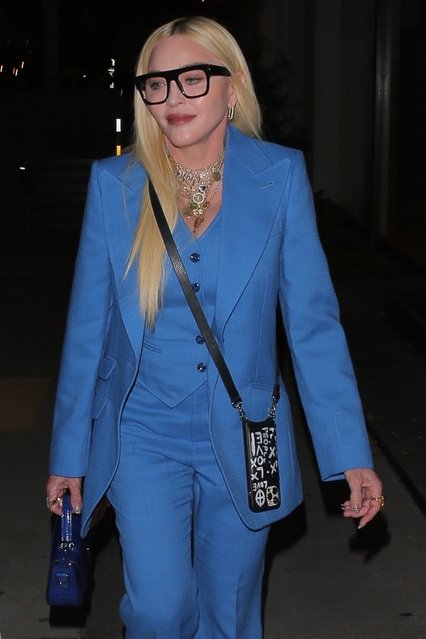 Madonna looks chic in blue as she is spotted leaving dinner with friends at celebrity hot spot Craig’s in West Hollywood on April 20, 2021. Madonna looks ageless as the 62 year old singer donned a blue 3 piece pants suit with black boots and a blue crocodile skin purse. She finished the look with a pair of trendy black glasses and necklaces around her neck. Madonna recently called gun control “a new vaccination” in passionate Instagram post saying, “It will save lives”. (Photo by Backgrid USA) 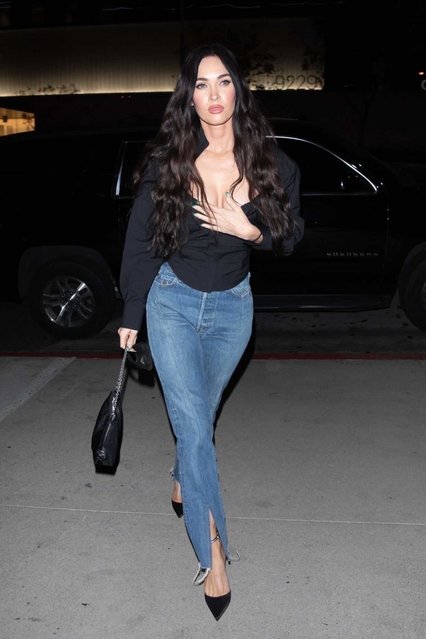 American actress and model Megan Fox makes her first appearance out solo since MGK was spotted with another girl. A somber-looking Megan bravely grabbed dinner, at the couple's go-to spot, BOA Steakhouse in West Hollywood on April 18, 2021. Although MGK and Megan have yet to deny or confirm these allegations there have been rumors of the couple possibly discussing marriage circulating in the media. (Photo by Backgrid USA) 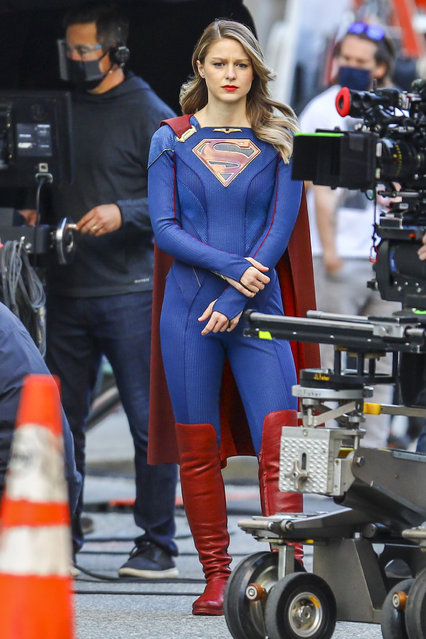 American actress and singer Melissa Benoist is pictured in full costume on the set of “Supergirl” in Vancouver, Canada on April 19, 2021. The 32 year old actress sported her signature superhero ensemble while preparing to film a scene for the popular CW show. (Photo by TheImageDirect) 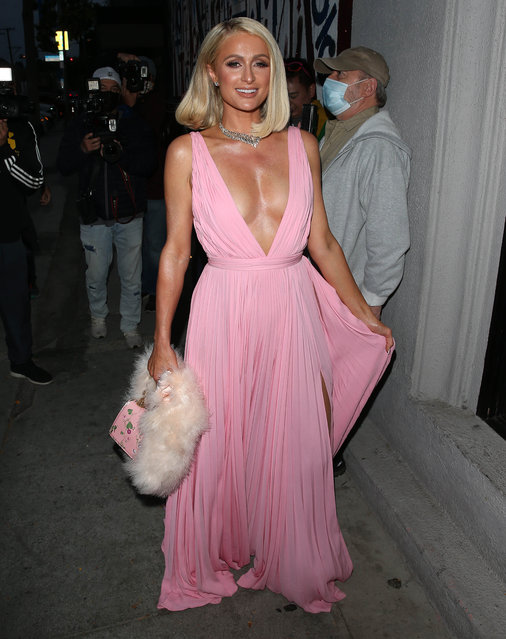 Paris Hilton Stuns in a Pink Dress as she arrives at Craigs Restaurant in West Hollywood, CA. on April 21, 2021. (Photo by The Mega Agency) 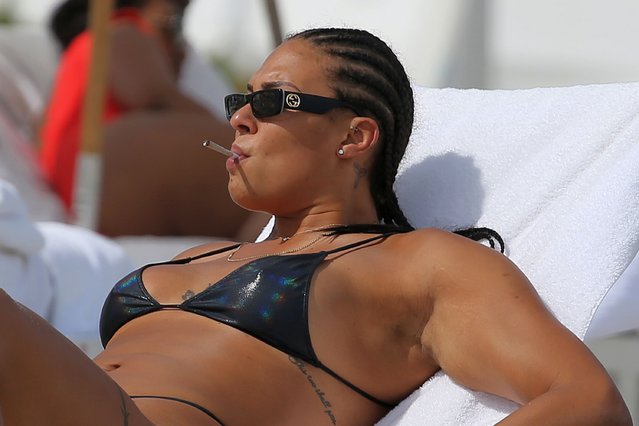 Australian professional basketball player Liz Cambage shows off her extensive tattoo collection in a tiny black bikini while having a smoke on the beach in Miami on April 7, 2021. (Photo by The Mega Agency/Profimedia) 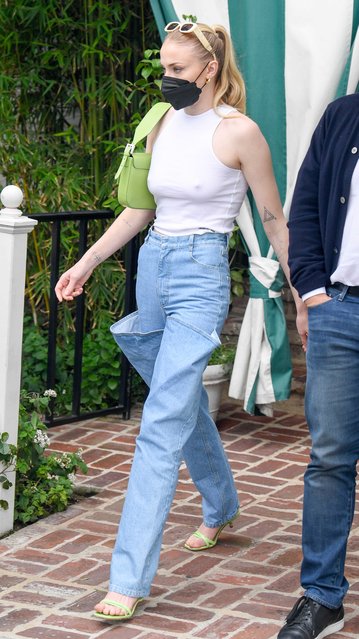