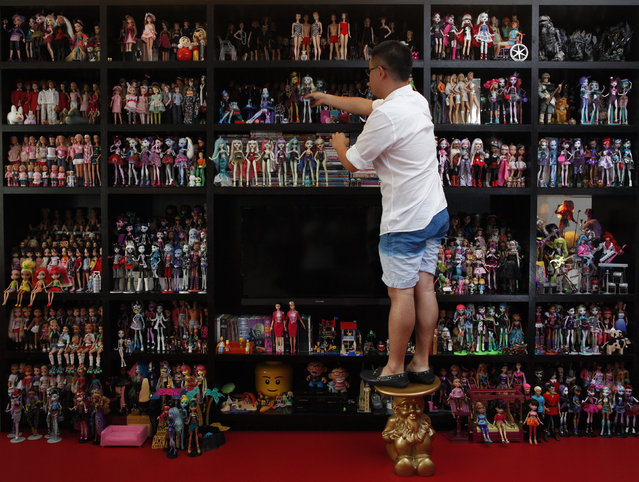 Barbie collector Jian Yang stands on a stool as he arranges part of his collection at his home in Singapore September 2, 2013. The white exterior and spartan grey staircase of Jian Yang's tidy rowhouse give no hint of the shock that lies within – a pink living room floor and his collection of more than 6,000 “Barbie” dolls. The Singaporean favors minimalist decor but the Barbies and 3,000 dolls of other kinds dominate three sides of the main room and spill over to fill nine mirrored cabinets in his dressing room and the shelves of his study. (Photo by Edgar Su/Reuters) 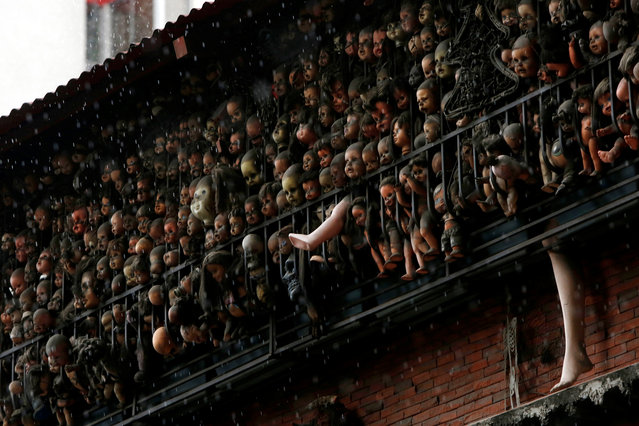 Dolls are seen on the balcony of artist and collector Etanis Gonzalez in Caracas, Venezuela, July 16, 2016. (Photo by Carlos Jasso/Reuters) 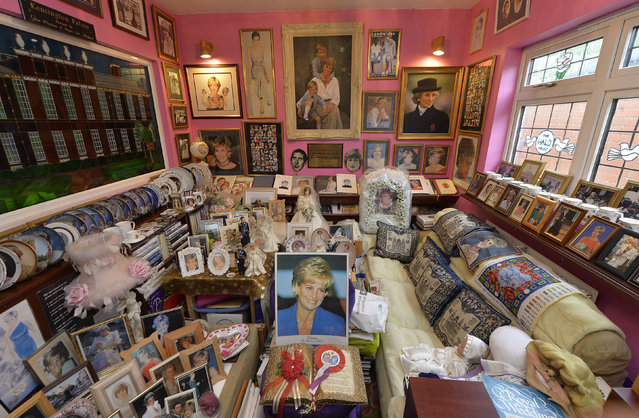 The “Diana” room is seen in the house of Margaret Tyler in west London October 16, 2013. The royal fan has dedicated the inside of her house as a shrine to Britain's royal family. (Photo by Toby Melville/Reuters) 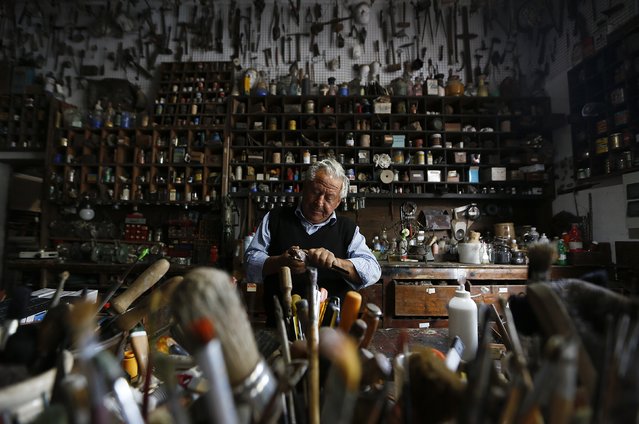 Italian collector Domenico Agostinelli works in his museum in Dragona, near Rome November 4, 2014. Agostinelli has a passion that has led him over the past 60 years to pick up and collect things of all types, from antique art to everyday objects of the past and present. His collection includes a 65-million-year-old dinosaur egg, meteor fragments, a car that once belonged to American mob boss Al Capone, a lock of hair of Italian national hero Giuseppe Garibaldi, toys, weapons, musical instruments of all kinds and many more. (Photo by Tony Gentile/Reuters) 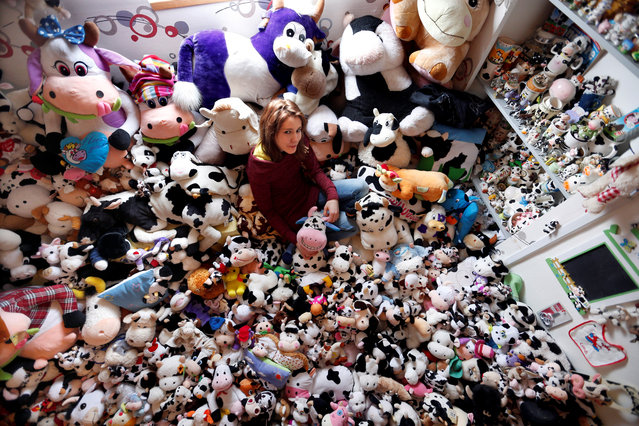 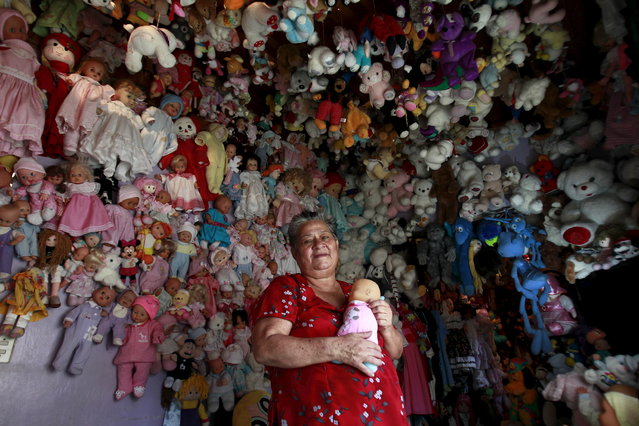 Andrea Rojas, 70, poses with her collection of dolls at her home in Heredia, Costa Rica, August 5, 2015. Rojas has been collecting dolls for over twenty years and has more than 4,500 dolls. (Photo by Juan Carlos Ulate/Reuters) 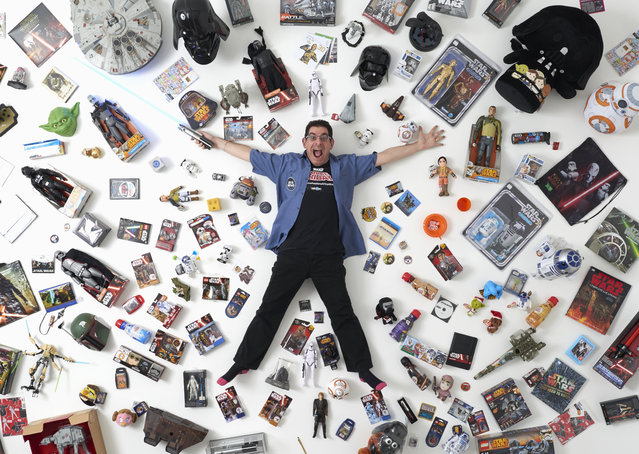 Star Wars collector James Burns, 44, poses for a photograph with some of his collection in London December 2, 2015. He said “I've met so many wonderful people, all over the world. It's a wonderful community of like-minded people with an interest in Star Wars. There's nothing else like it”. (Photo by Paul Hackett/Reuters) 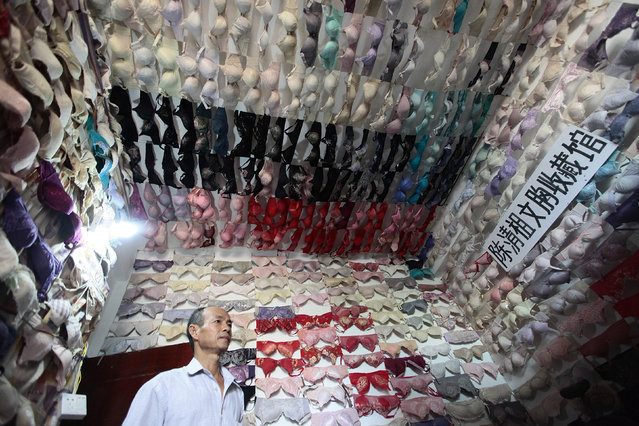 Chen Qingzu stands in a small room with the walls and ceiling covered in bras he collected, in Sanya, Hainan province April 22, 2014. Chen has collected about 5,000 bras over 20 years after touring more than 30 different colleges around the country for public benefit activities aiming to raise awareness of breast cancer, local media reported. (Photo by Reuters/Stringer) 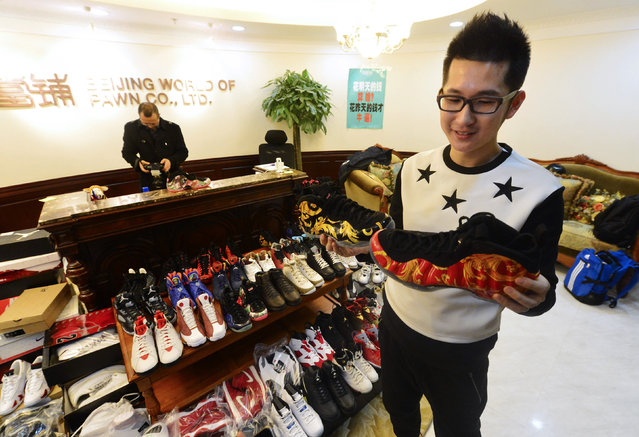 A man holds two sneakers of his collection of Nike Air Jordan as he sells them at a pawn shop in Beijing February 8, 2015. The man pawned a total of 283 pairs of his Nike Air Jordan sneakers collection for a million yuan ($160,000 USD), which he needed for the down payment of his wedding apartment. He had been collecting sneakers for over 10 years and he was planning to redeem them within the two months contract with the pawn shop, local media reported. (Photo by Reuters/Stringer) 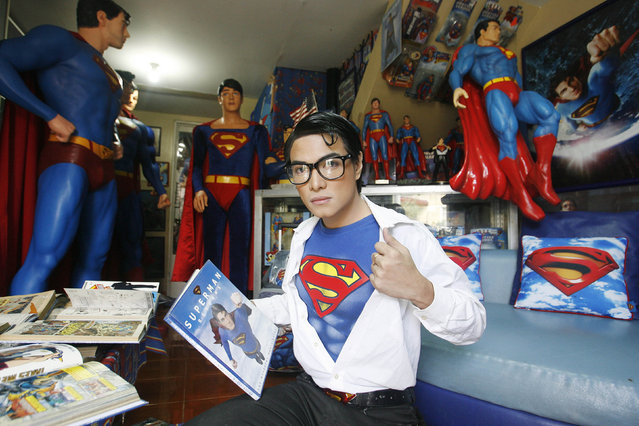 Herbert Chavez poses with his Superman collection inside his house in Calamba Laguna, south of Manila October 12, 2011. In his idolization of the superhero, Chavez, a self-professed “pageant trainer” who owns two costume stores, has undergone a series of cosmetic surgeries for his nose, cheeks, lips and chin down to his thighs and even his skin color to look more like the “Man of Steel”. The final result bears little resemblance to his old self. (Photo by Cheryl Ravelo/Reuters) 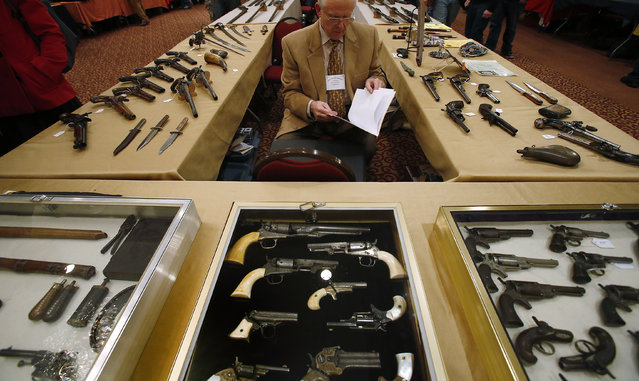 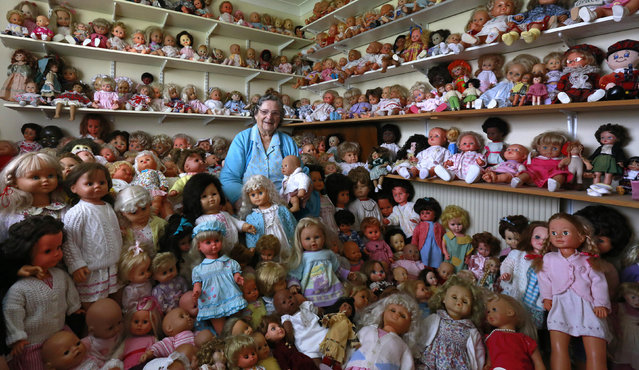 Mary Hickey poses with her collection of dolls at her home in Ashbourne, Ireland October 9, 2013. Hickey has been collecting the dolls for over thirty years and now owns over 420 dolls. (Photo by Cathal McNaughton/Reuters) 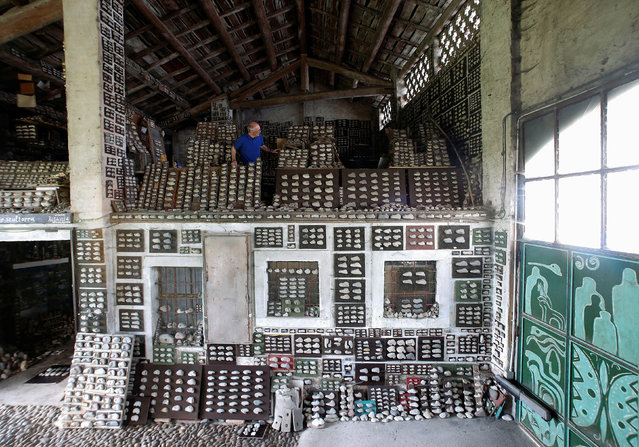 Stone collector Luigi Lineri, 79, walks through his stone collection found along Adige river, at his home workshop in Zevio, near Verona, Italy, June 10, 2016. Lineri's home workshop is covered in stones – tens of thousands of them. They resemble animal heads, human faces and other forms, and the artist and poet believes may have been shaped by prehistoric humans. Lineri has built his vast collection over the last 50 years, making his finds along the Adige river, near Verona in northern Italy. “I haven't counted them and don't intend to do so but the quantity is significant”, Lineri said. (Photo by Alessandro Bianchi/Reuters) 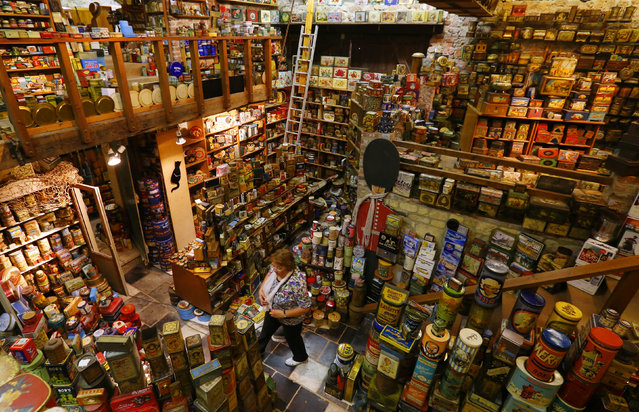 Yvette Dardenne, 75, from Belgium, walks among hundreds of vintage lithographed tin boxes, which are part of a huge collection displayed at her house in Grand-Hallet, eastern Belgium August 5, 2013. Dardenne, who currently possesses about 56,800 boxes from around the world, said her passion started 22 years ago when her aunt gave her a decorated chocolate box from the late 1950s. According to Dardenne, the boxes are like a history book, describing the major events of the last two centuries. In addition to commercials advertising the products they contain, the boxes are often decorated with pictures typical of a certain historic era or describing a historic event such as a royal wedding. Some were also designed to serve as toys or later used for other purposes such as serving as a paper weight. The boxes displayed contained all kind of products such as biscuits, soap, tobacco, tea, and medicine. (Photo by Yves Herman/Reuters) 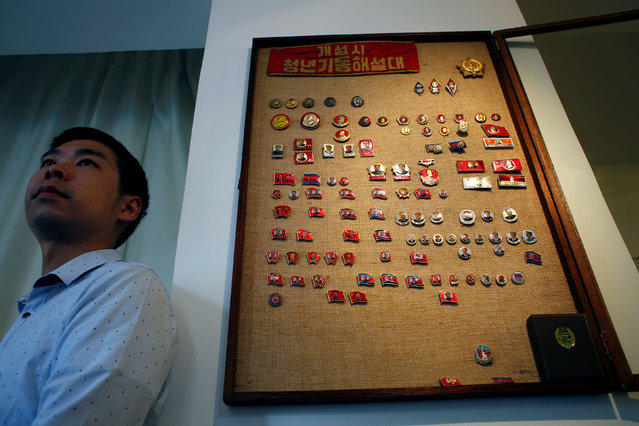