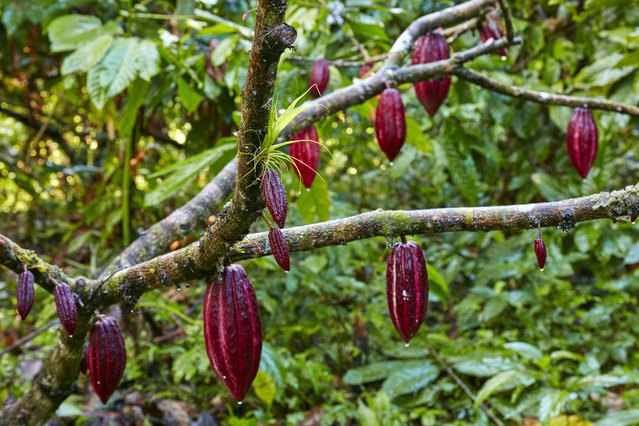 Chocolate is the greatest gift the Earth has given us. The dessert table would be a sad sight without it. It’s so beloved, so appreciated, that the Swedish scientist who named the cocoa plant that gives us chocolate called it Theobroma cacao, which means “food of the gods”. Anyone who loves chocolate knows this is absolutely fitting, mostly because it is the most delicious stuff on earth, but also because of the incredible process and long journey it has to undergo to become the sweet confection we adore. Chocolate starts off as cocoa pods growing in the tropics, typically in a belt around the equator, long before showing up at a local grocery store near you. Here: Fruits of the Cacao (Theobroma cacao), Sterculiaceae, around Kumasi, Ghana. (Photo by Rudi Sebastian/Getty Images) 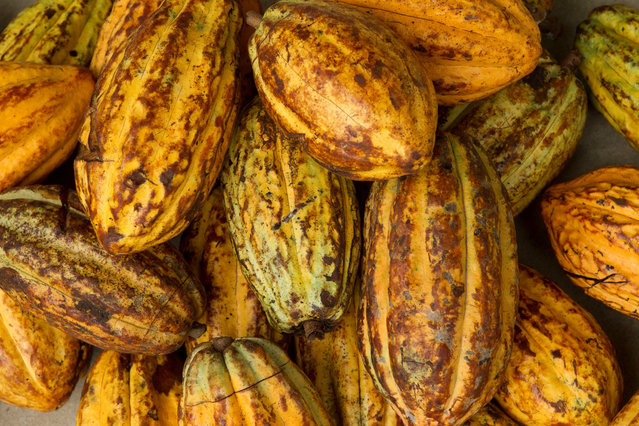 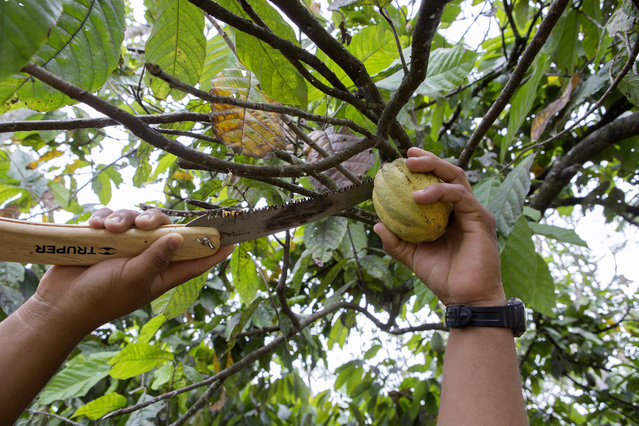 Jose Luis Garcia, an owner of the G8 cooperative cocoa farm, cuts a cocoa pod from a tree at the farm in the state of Tabasco near Comalcalco, Mexico, on Tuesday, April 8, 2014. G8 is a cocoa supplier for Nestle SA, the world's largest food supplier. (Photo by Susana Gonzalez/Bloomberg via Getty Images) 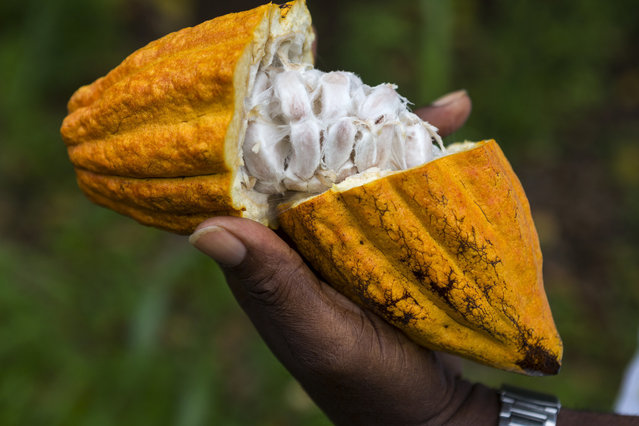 Farmer holding a freshly cut cocoa bean pod, revealing the pulp and seed inside on a rainforest farm. (Photo by Doug McKinlay/Getty Images) 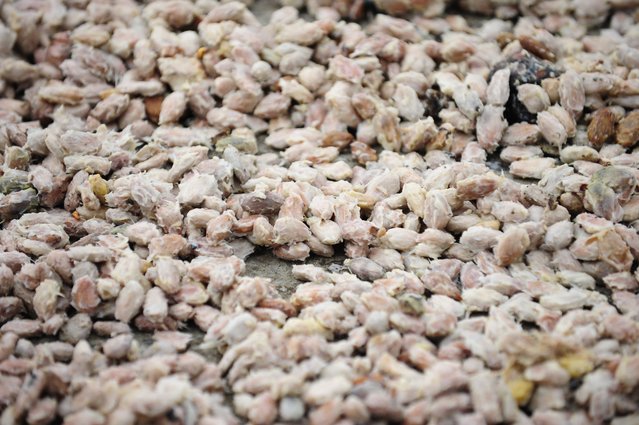 Cocoa beans put to dry and to ferment at the Inmobiliaria Guangala exporting company in the outskirts of Guayaquil, 260 km southwest of Quito, on May 3, 2014. The CCN51 variety of ocoa, resistant to plagues though sour tasting, could be the next star in the market and its growing has shot up in the Ecuadorean coast. (Photo by Rodrigo Buendia/AFP Photo) 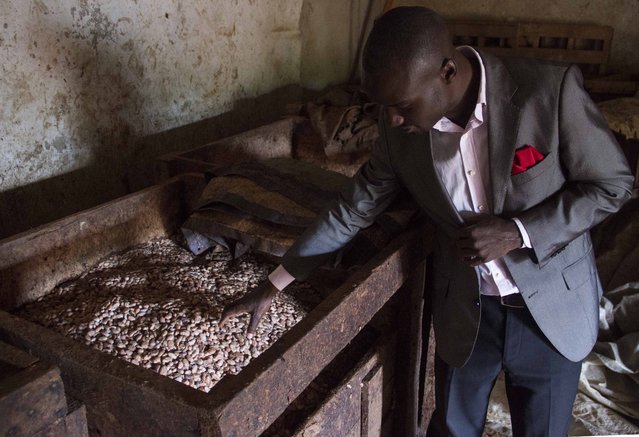 Stephen Sembuya, co-founder of the Pink Food Industries, looks at the cocoa fermenting at their factory in Wakiso on November 21, 2014. Two Ugandan men, Stephen Sembuya and Felix Okuye have embarked on chocolate manufacturing in Uganda and own more than 70 acres of cocoa plantation. Last may, their start-up business began selling a variety of locally-made treats including milk chocolate, cocoa powder, cocoa butter and white chocolate, to Kampala restaurants and a businessman in Ghana, the world's second-largest cocoa exporter, has also been lapping up their treats. (Photo by Isaac Kasamani/AFP Photo) 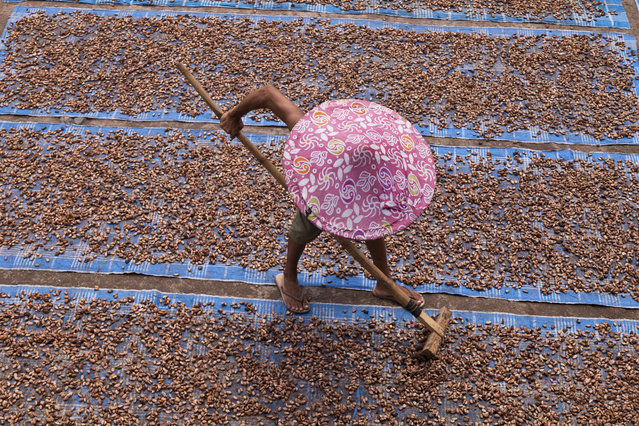 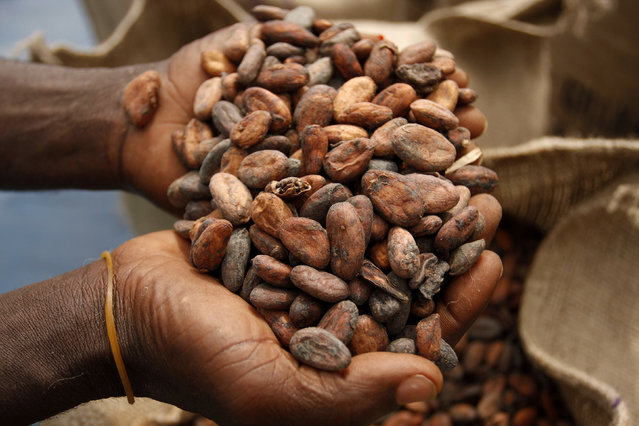 Dried cocoa beans are packed in hessian sacks on a cocoa farm near Amankwakram in Western Ghana on the border with Ivory coast February 14, 2011. The increased traffic in contraband Ivorian cocoa beans following the country's export ban is starting to impact neighbour Ghana's cocoa industry. (Photo by Hereward Holland/Reuters) 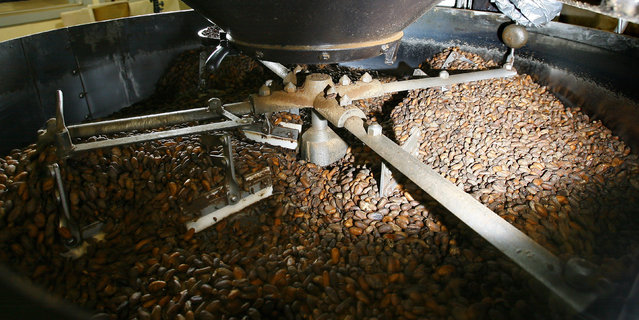 Freshly roasted cocoa beans exit the roaster at the Theo Chocolate factory in Seattle Wednesday, November 12, 2008. Andy McShea is a Harvard-trained molecular biologist using his scientific talent in Seattle to promote “true chocolate” and steer consumers away from inadvertently ingesting all that other brown sweet stuff he says is often unhealthy, morally questionable and not the real thing. (Photo by Gilbert W. Arias/AP Photo/Seattle Post-Intelligencer) 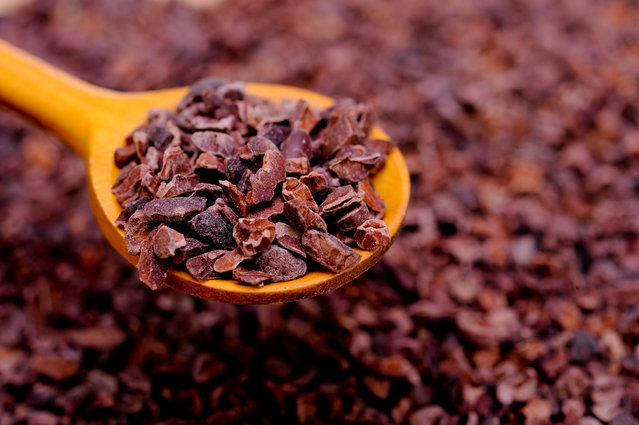 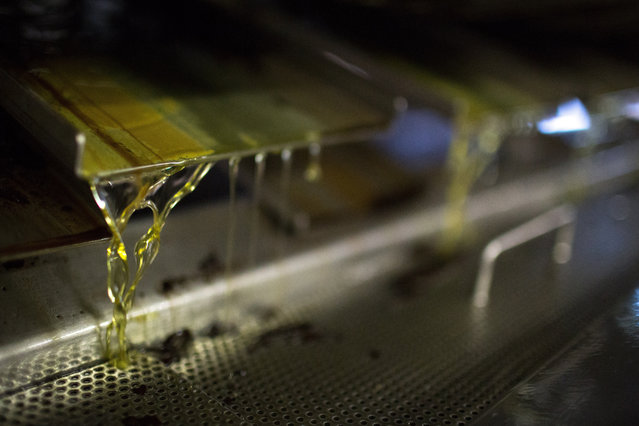 Liquid cocoa butter pours from a machine during the early stages of confectionary manufacture at the Rossiya chocolate factory, operated by Nestle SA, in Samara, Russia, on Tuesday, September 16, 2014. (Photo by Andrey Rudakov/Bloomberg via Getty Images) 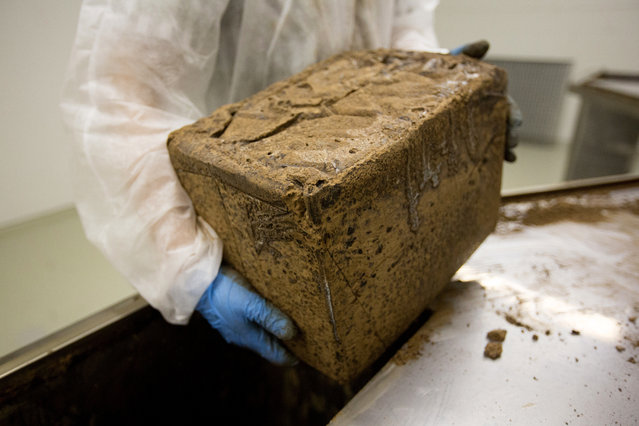 An employee prepares a large briquette of compressed cocoa powder for smelting at the new Transmar Group plant which makes cocoa products for Russian chocolate makers in Ozery, Russia, on Wednesday, March 30, 2016. (Photo by Andrey Rudakov/Bloomberg via Getty Images) 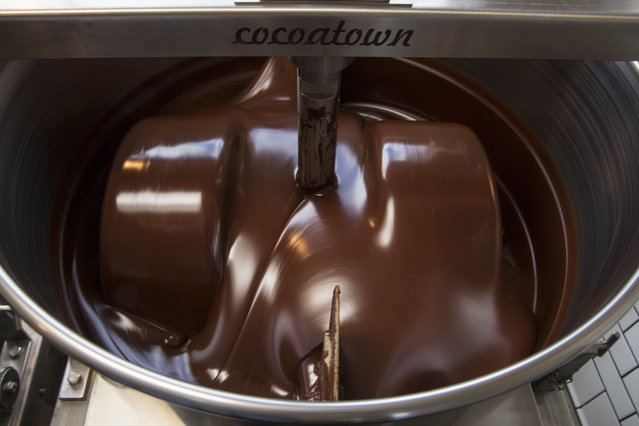 Crushed cocoa beans are processed with sugar and other ingredients in a melanger for hours, binding the ingredients to detailed specifications. Ryan Berk of Parliament Chocolate is at the vanguard of the “bean to bar”, chocolate trend. Berk travels across Latin America searching for heirloom cacao and flavors that bear little resemblance to a Hershey's bar. (Photo by Robert Gauthier/Los Angeles Times via Getty Images)
Edit Del
10 Aug 2016 10:20:00, post received 0 comments
Publication archive:
←   →
Popular tags:
All tags
Last searches: