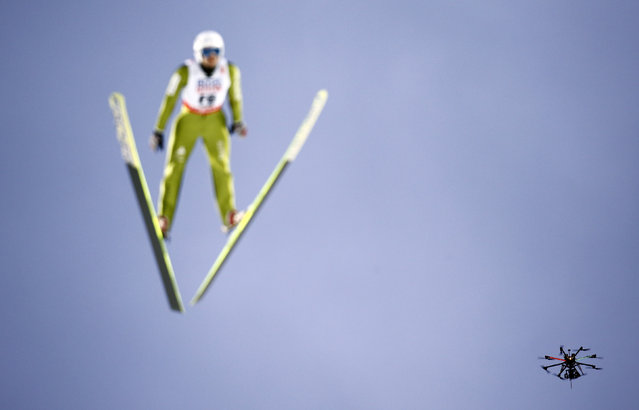 A drone flies next to a pre jumper during the men's large hill individual ski jumping event at the Nordic World Ski Championships in Falun, Sweden, February 26, 2015. (Photo by Kai Pfaffenbach/Reuters) 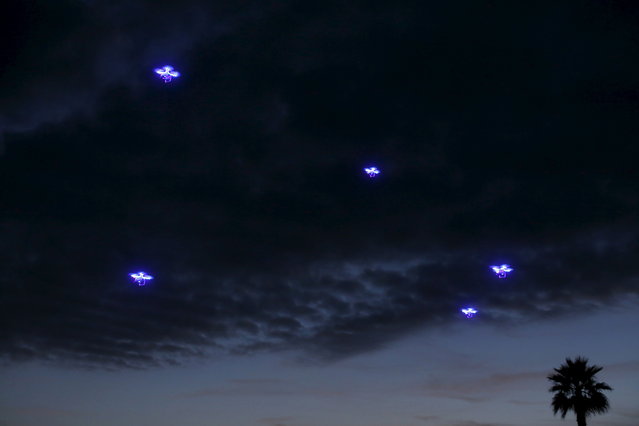 Drones fly in synchronization above attending conference goers as they dine outside along the ocean during the opening remarks at the beginning of the Wall Street Journal Digital Live conference at the Montage hotline Laguna Beach, California, October 19, 2015. (Photo by Mike Blake/Reuters) 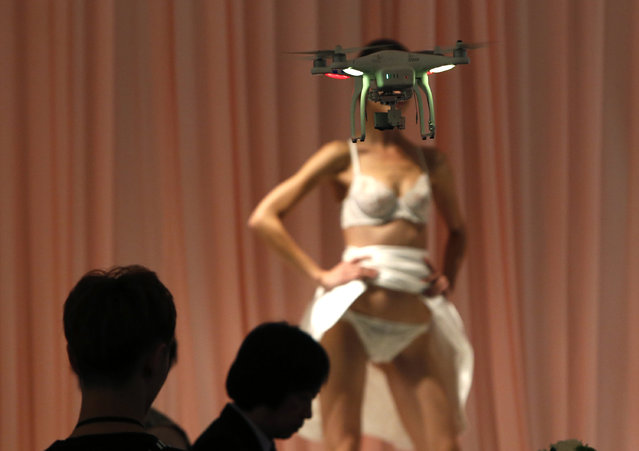 A videographer uses a drone as he takes a video of a model presenting a lingerie creation at the rehearsal for Eve's Temptation collection during China Fashion Week in Beijing, October 26, 2014. (Photo by Kim Kyung-Hoon/Reuters) 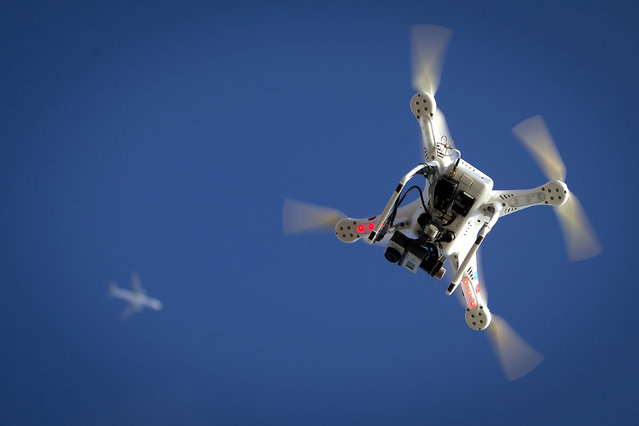 An airplane flies over a drone during the Polar Bear Plunge on Coney Island in Brooklyn, January 1, 2015. The Coney Island Polar Bear Club is one of the oldest winter bathing organizations in the United States and holds a New Year's Day plunge every year. (Photo by Carlo Allegri/Reuters) 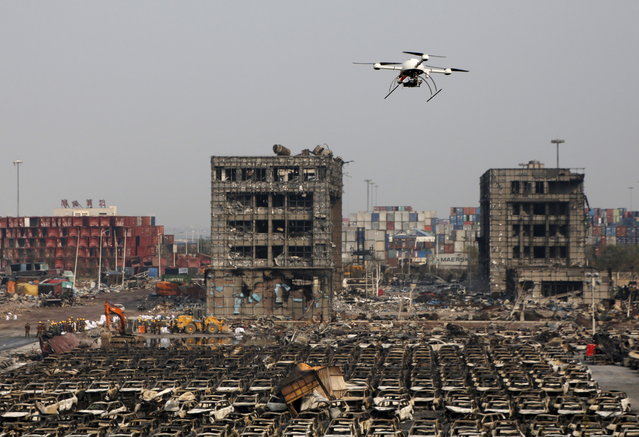 A drone operated by paramilitary police flies over the site the explosions at Binhai new district in Tianjin, China, August 17, 2015. (Photo by Kim Kyung-Hoon/Reuters) 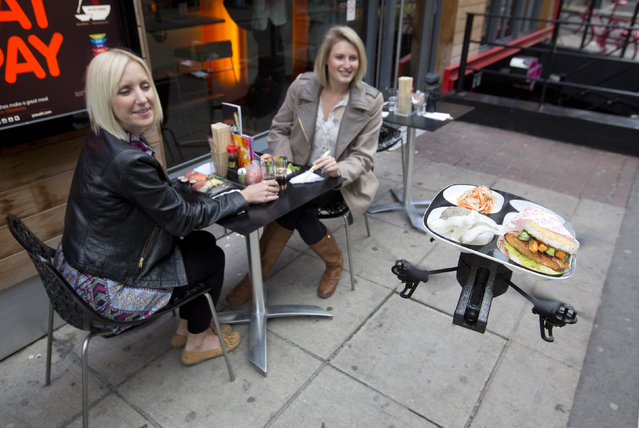 A flying sushi service tray known as the "itray", created using miniature remote-controlled helicopter rotor blades, is demonstrated by staff at a "Yo! Sushi" restaurant in London, June 10, 2013. (Photo by Neil Hall/Reuters) 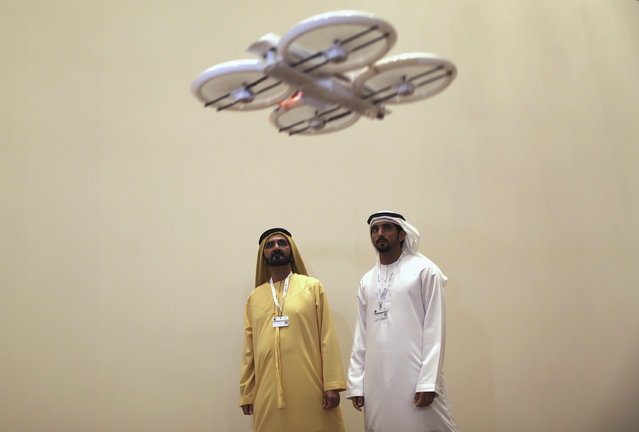 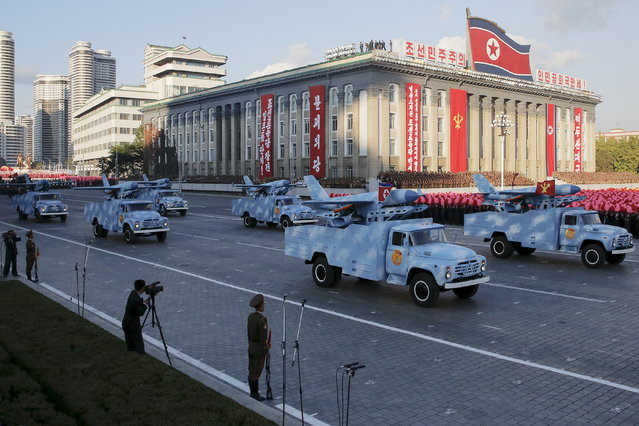 Trucks carry drones under a stand with North Korean leader Kim Jong Un and other officials during the parade celebrating the 70th anniversary of the founding of the ruling Workers' Party of Korea, in Pyongyang, October 10, 2015. (Photo by James Pearson/Reuters) 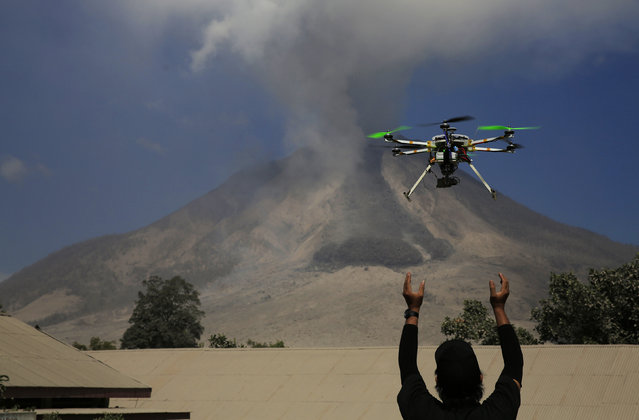 An official of the Center for Research and Technology Volcanoes Development releases a drone quadcopter to monitor activity from the Mount Sinabung volcano at Sibintun village in Karo district, North Sumatra province, Indonesia, February 4, 2014. (Photo by Reuters/Beawiharta) 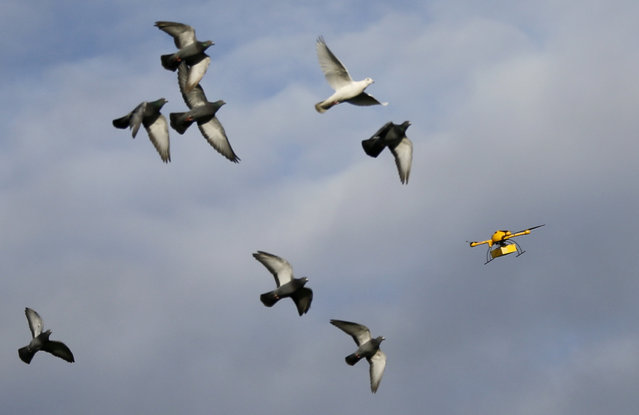 A flock of pigeons flies with a prototype "parcelcopter" of German postal and logistics group Deutsche Post DHL in Bonn, December 9, 2013. (Photo by Wolfgang Rattay/Reuters) 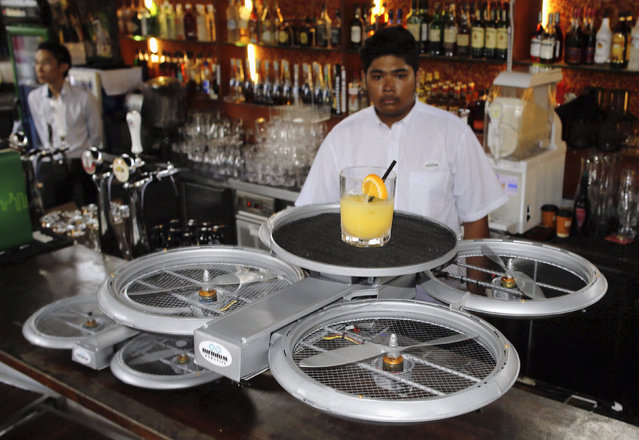 A bartender watches as an Infinium-Serve Flying Robot takes off with an order at a restaurant during a pilot demonstration for the media in Singapore, February 5, 2015. (Photo by Edgar Su/Reuters) 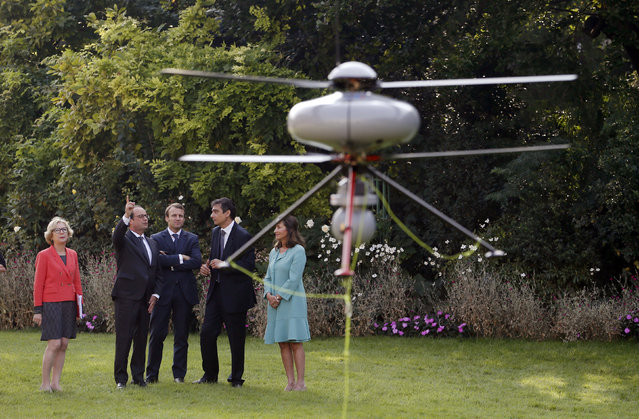