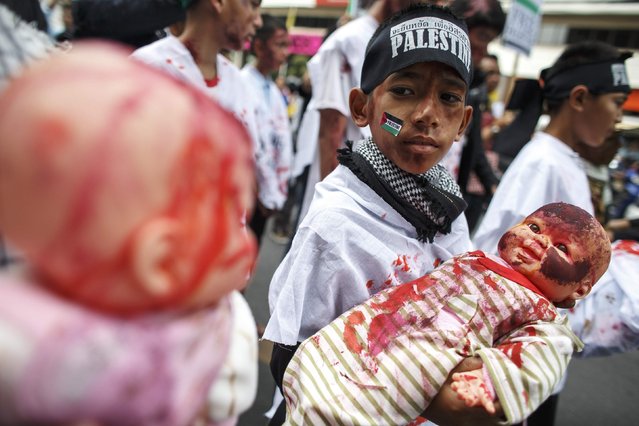 Demonstrators hold dolls, with make-up of injuries, during an anti-Israel protest in front of the Israeli embassy, in Bangkok July 25, 2014. Gazan authorities said Israeli forces shelled a shelter at a U.N.-run school on Thursday, killing at least 15 people as the Palestinian death toll in the conflict climbed over 760 and attempts at a truce remained elusive. The Israeli military said it was investigating the incident. (Photo by Athit Perawongmetha/Reuters) 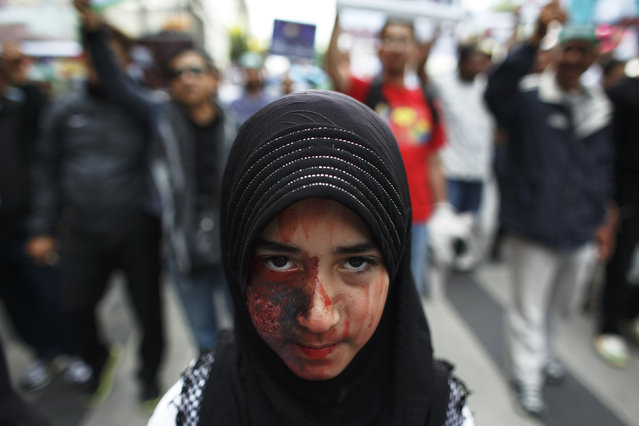 A demonstrator wears make-up of injuries during an anti-Israel protest, in front of the Israeli embassy, in Bangkok July 25, 2014. (Photo by Athit Perawongmetha/Reuters) 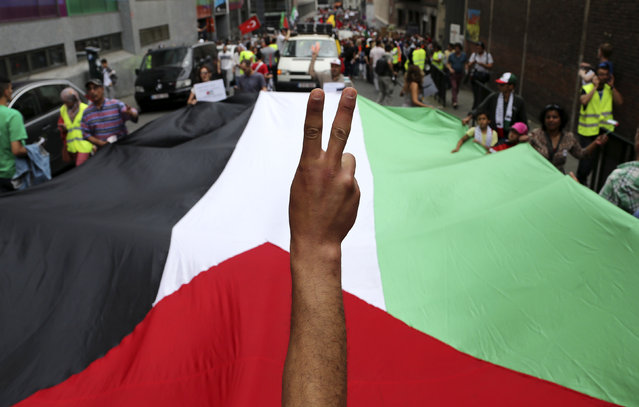 A demonstrator flashes a victory sign in front of a Palestinian flag during a protest against Israel's military action in Gaza, in central Brussels July 19, 2014. (Photo by Francois Lenoir/Reuters) 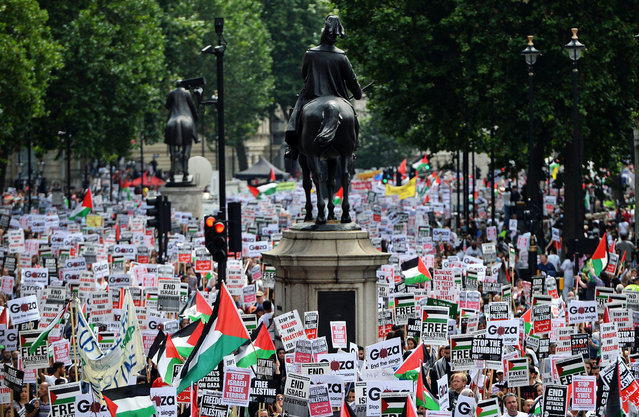 Tens of thousands of pro-Palestinian demonstrators march up Whitehall towards the Israeli embassy during a protest in London, Britain, 19 July 2014. (Photo by Andy Rain/EPA) 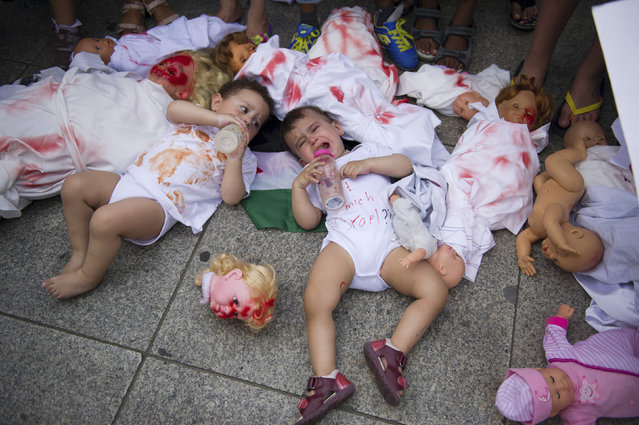 Babies placed alongside dolls and doll parts with fake blood, symbolizing the death of children in Gaza, are seen during a demonstration for Palestine, in Berlin July 22, 2014. (Photo by Steffi Loos/Reuters) 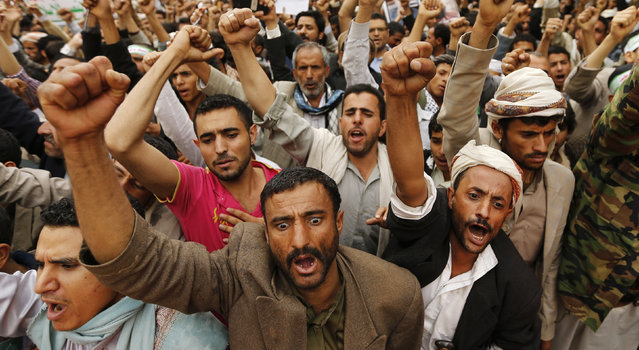 People shout slogans as they demonstrate to denounce Israeli air strikes on the Gaza strip, in Sanaa, Yemen on July 10, 2014. (Photo by Khaled Abdullah/Reuters) 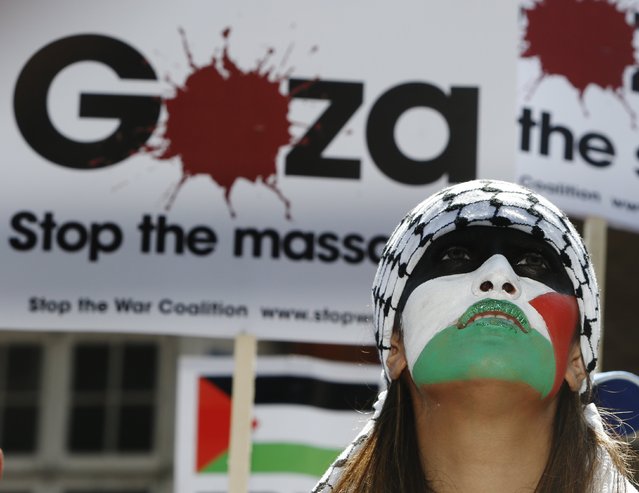 A demonstrator with face painted in the colours of the Palestinian flag protests outside the Israeli Embassy in west London July 26, 2014. Foreign ministers from the United States, Europe and the Middle East called on Saturday for an extension of the 12-hour ceasefire between Israel and Hamas in the Gaza Strip, French Foreign Minister Laurent Fabius said. (Photo by Luke MacGregor/Reuters) 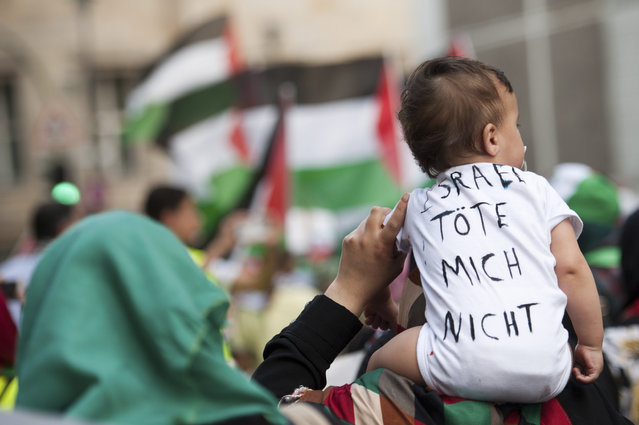 A woman carries a baby with shirt that reads, “Israel don't kill me”, during a demonstration supporting Palestine, in Berlin July 22, 2014. (Photo by Steffi Loos/Reuters) 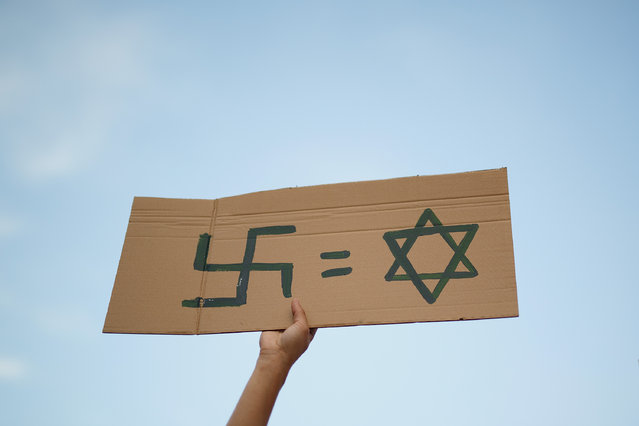 A Pro-Palestinian demonstrator holds a placard with the symbols “Swastika equal to Star of David” during a demonstration on July 17, 2014 in Madrid, Spain. (Photo by Pablo Blazquez Dominguez/Getty Images) 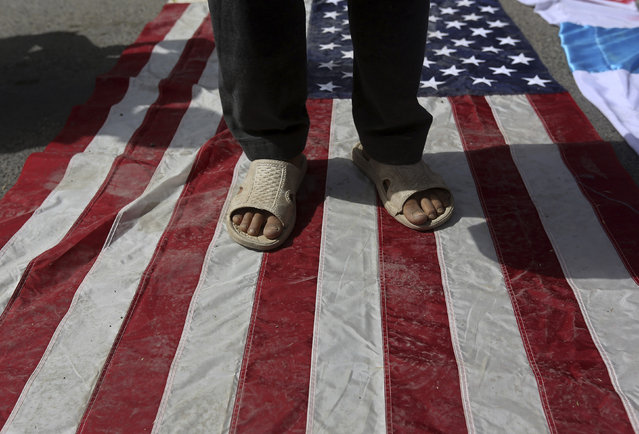 A demonstrator steps on a U.S. flag during a protest against Israel's military action in Gaza, after offering the last Friday prayers of the holy fasting month of Ramadan, in Kabul July 25, 2014. (Photo by Omar Sobhani/Reuters) 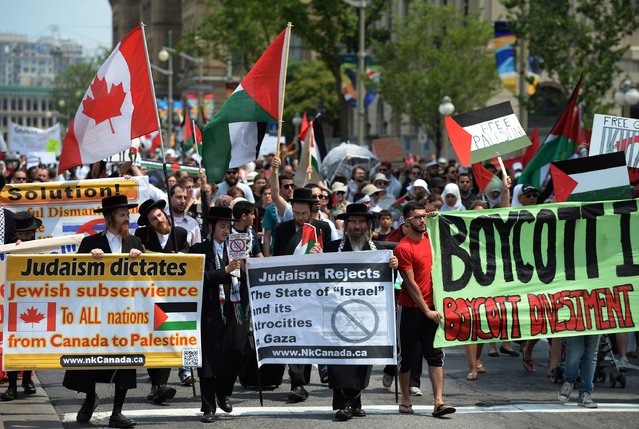 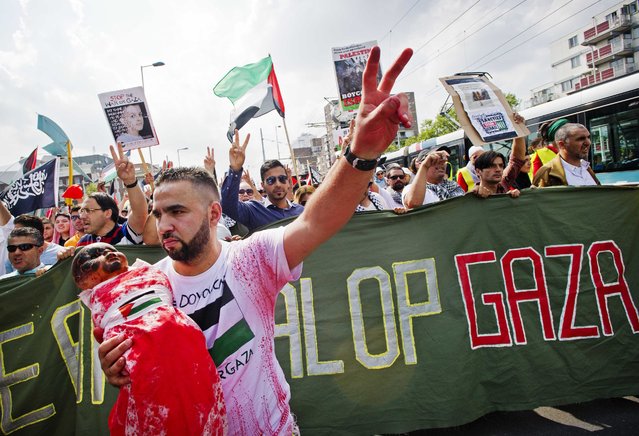 Pro Palestinian demonstrators protest against the ongoing Israeli violence in the Gaza Strip in the center of Rotterdam, The Netherlands, 27 July 2014. Hamas announced 27 July it would observe its own 24-hour lull in fighting, hours after rejecting a 24-hour humanitarian truce proposed by Israel. But violence resumed, and the extent of the damage of nearly three weeks of Israeli air and artillery strikes in Gaza was thrown into sharp relief. (Photo by Marten Van Dijl/EPA) 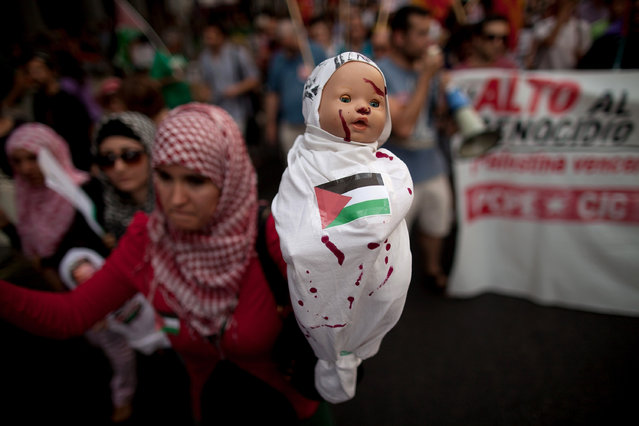 A Pro-Palestinian demonstrator holds a baby toy with the Palestinian flag during a demonstration on July 17, 2014 in Madrid, Spain. (Photo by Pablo Blazquez Dominguez/Getty Images) 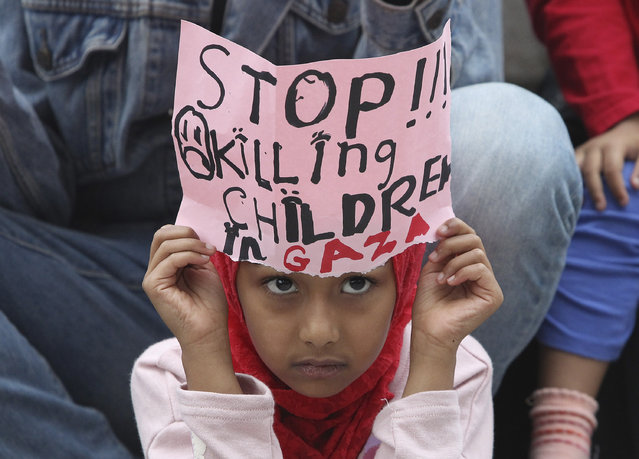 A Palestinian girl holding a sheet of paper written with a slogan attends a rally against the Israeli military operations in Gaza and the West Bank near the Israeli Embassy in Seoul, South Korea, Saturday, July 26, 2014. Israel and Hamas began a 12-hour humanitarian cease-fire in Gaza Saturday after the efforts of U.S. Secretary of State John Kerry failed to produce a longer truce aimed at ending nearly three weeks of fighting. (Photo by Ahn Young-joon/AP Photo) 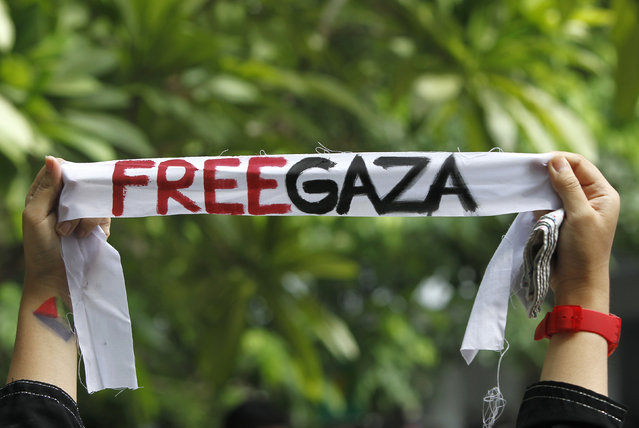 A demonstrator holds a headband during an anti-Israel protest in front of the Israeli embassy in Bangkok July 15, 2014. The group of demonstrators called for a stop to Israel's offensive in Gaza, and a stop to the ongoing conflict between Israel and Palestinian militants in Gaza. (Photo by Chaiwat Subprasom/Reuters) 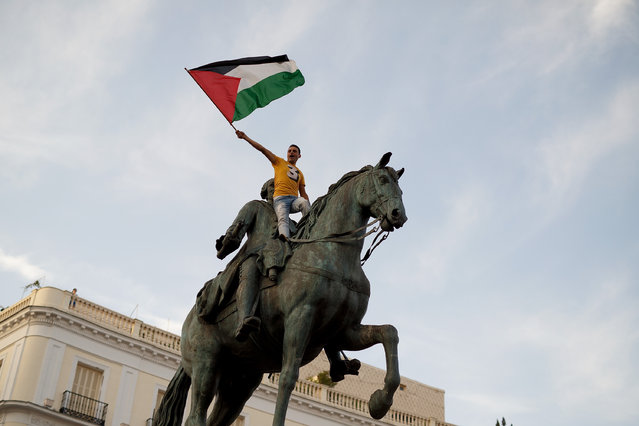 A Pro-Palestinian demonstrator waves a Palestinian flag on top of Carlos III statue in Puerta del Sol Square during a demonstration on July 17, 2014 in Madrid, Spain. (Photo by Pablo Blazquez Dominguez/Getty Images) 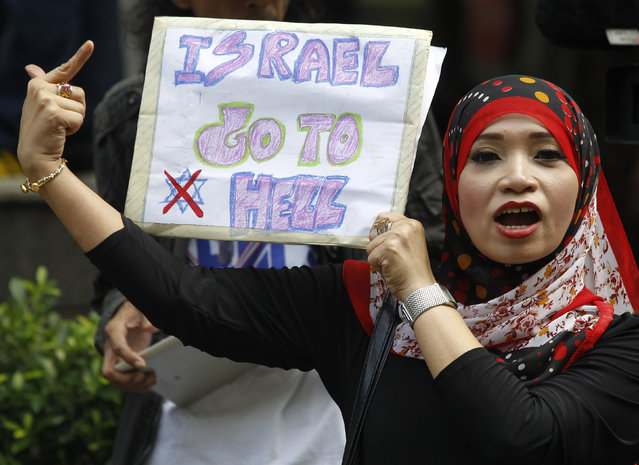 A demonstrator shouts slogans while holding a sign during an anti-Israel protest in front of the Israeli embassy in Bangkok July 15, 2014. (Photo by Chaiwat Subprasom/Reuters) 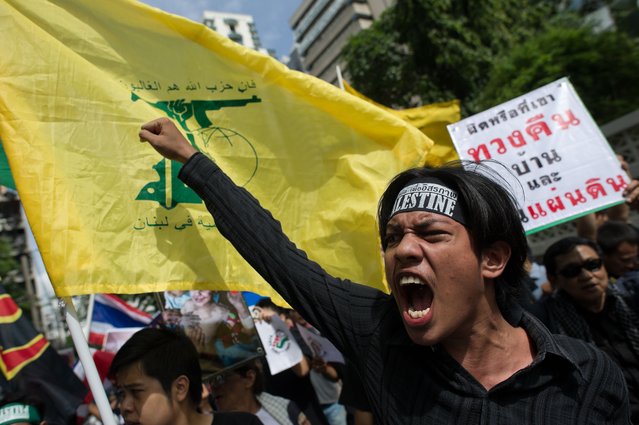 Palestinians supporters shout for an end to the violence in Gaza during a rally outside the Israeli embassy in Bangkok during a parade marking al-Quds Day or Jerusalem Day, on Jule 25, 2014. (Photo by Nicolas Asfouri/AFP Photo) 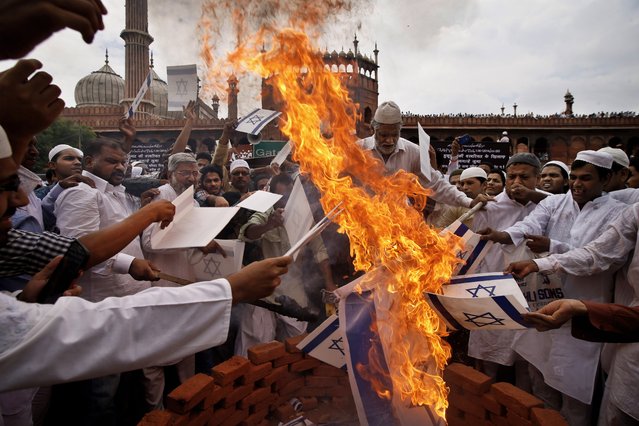 Indian Muslims burn a flag of Israel as they protest against Israel's attack on Gaza, after friday afternoon prayers at Jama Masjid in New Delhi, India, Friday, July 25, 2014. (Photo by Saurabh Das/AP Photo) 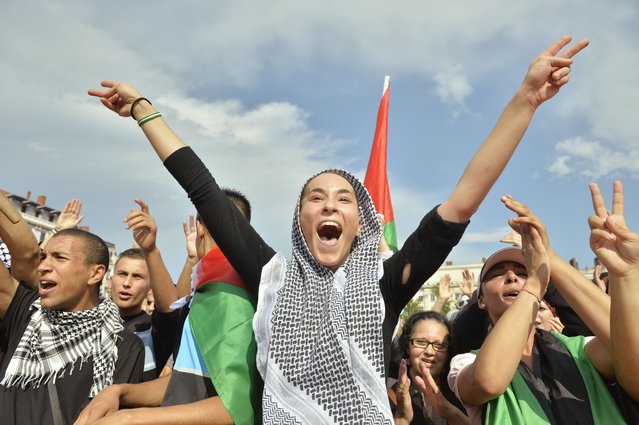 People shout slogans and flashes the V-sign during a demonstration in Lyon, central eastern France, on July 26, 2014 to protest against Israel's military campaign in Gaza and show their support for the Palestinian people. (Photo by Romain Lafabregue/AFP Photo) 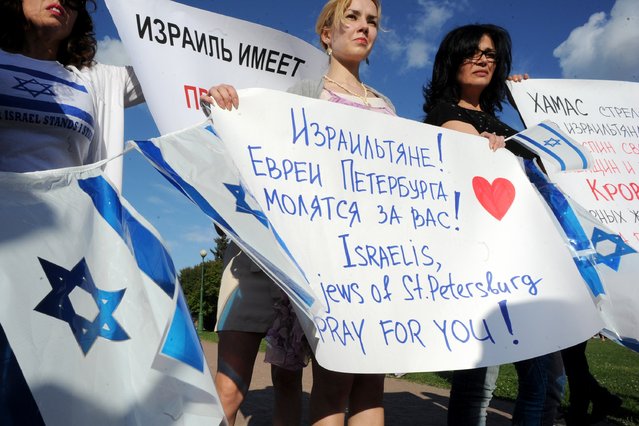 A picture taken in the Russia's second city of St. Petersburg on July 21, 2014, shows pro-Israeli activists rallying in support of the Israeli campaign of shelling and airstrikes in the Gaza Strip. Israel says its campaign aims to stamp out rocket fire from Gaza, and the ground phase of the operation to destroy tunnels burrowed into Israel by Hamas, the main power in the coastal strip. (Photo by Olga Maltseva/AFP Photo)
Edit Del
28 Jul 2014 10:41:00, post received 0 comments
Publication archive:
←   →
Popular tags:
All tags
Last searches: